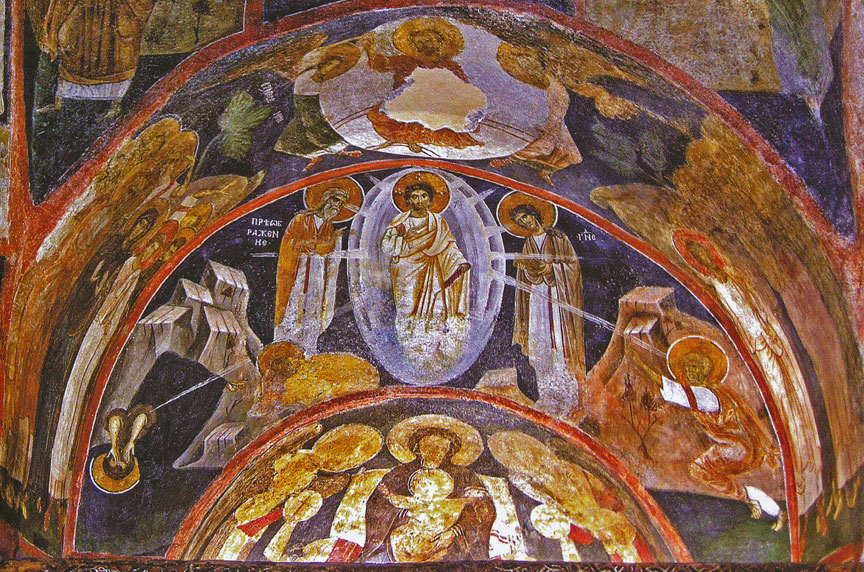 Buon fresco technique consists of painting in pigment mixed with water on a thin layer of wet, fresh (hence the name) lime mortar or plaster, for which the Italian word for plaster, intonaco, is used. Because of the chemical makeup of the plaster, a binder is not required, as the pigment mixed solely with the water will sink into the intonaco, which itself becomes the medium holding the pigment. The pigment is absorbed by the wet plaster; after a number of hours, the plaster dries and reacts with the air: it is this chemical reaction which fixes the pigment particles in the plaster. One of the first painters in the post-classical period to use this technique was the Isaac Master in the Upper Basilica of Saint Francis in Assisi. A person who creates fresco is called a frescoist. 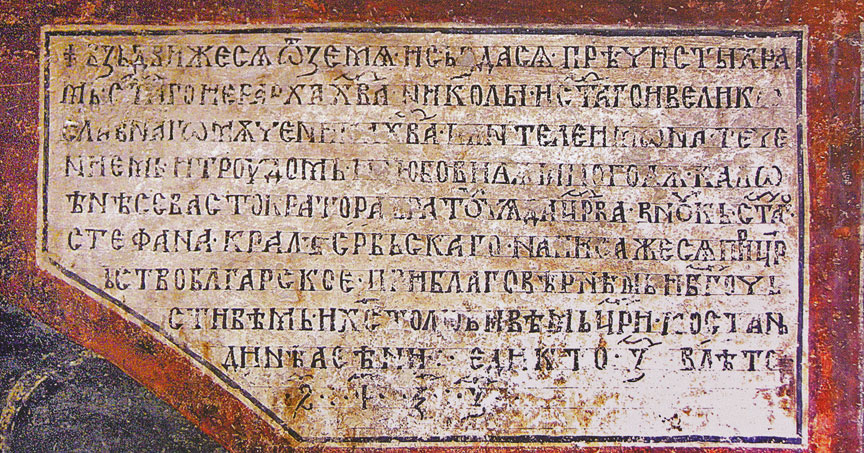 A secco painting, in contrast, is done on dry plaster (secco is "dry" in Italian). The pigments thus require a binding medium, such as egg (tempera), glue or oil to attach the pigment to the wall. It is important to distinguish between a secco work done on top of buon fresco, which according to most authorities was in fact standard from the Middle Ages onwards, and work done entirely a secco on a blank wall. Generally, buon fresco works are more durable than any a secco work added on top of them, because a secco work lasts better with a roughened plaster surface, whilst true fresco should have a smooth one. The additional a secco work would be done to make changes, and sometimes to add small details, but also because not all colours can be achieved in true fresco, because only some pigments work chemically in the very alkaline environment of fresh lime-based plaster. Blue was a particular problem, and skies and blue robes were often added a secco, as neither azurite blue, nor lapis lazuli, the only two blue pigments then available, work well in wet fresco. 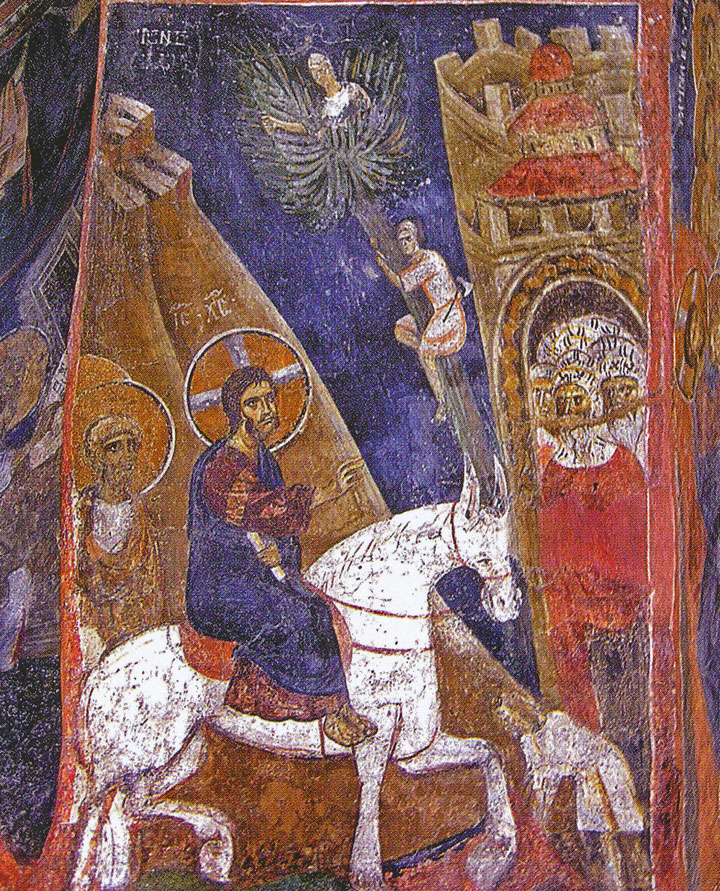 It has also become increasingly clear, thanks to modern analytical techniques, that even in the early Italian Renaissance painters quite frequently employed a secco techniques so as to allow the use of a broader range of pigments. In most early examples this work has now entirely vanished, but a whole fresco done a secco on a surface roughened to give a key for the paint may survive very well, although damp is more threatening to it than to buon fresco. 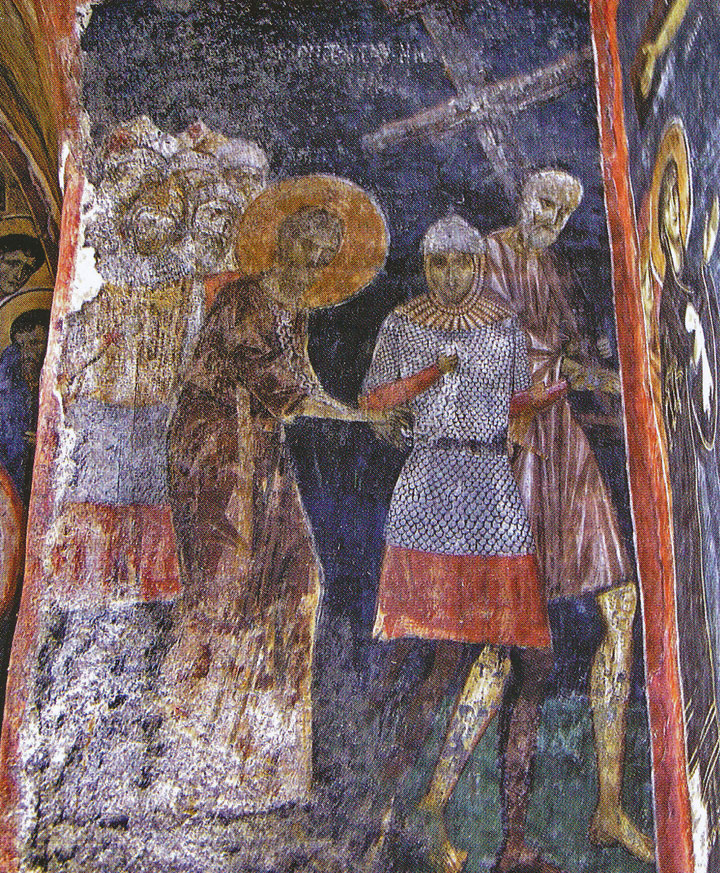 A third type called a mezzo-fresco is painted on nearly dry intonaco—firm enough not to take a thumb-print, says the sixteenth-century author Ignazio Pozzo—so that the pigment only penetrates slightly into the plaster. By the end of the sixteenth century this had largely displaced buon fresco, and was used by painters such as Gianbattista Tiepolo or Michelangelo. This technique had, in reduced form, the advantages of a secco work. 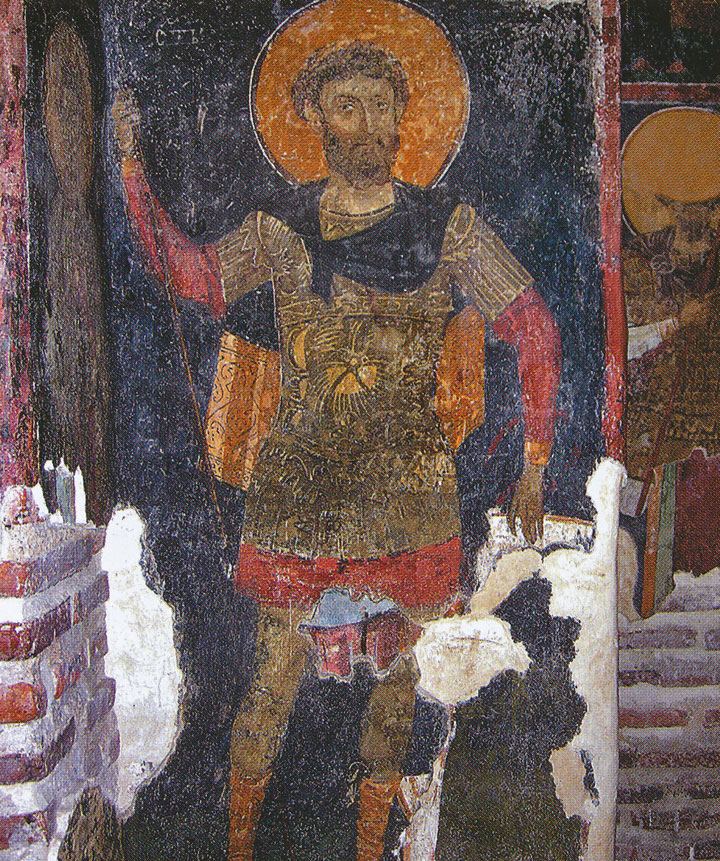 The three key advantages of work done entirely a secco were that it was quicker, mistakes could be corrected, and the colours varied less from when applied to when fully dry—in wet fresco there was a considerable change. 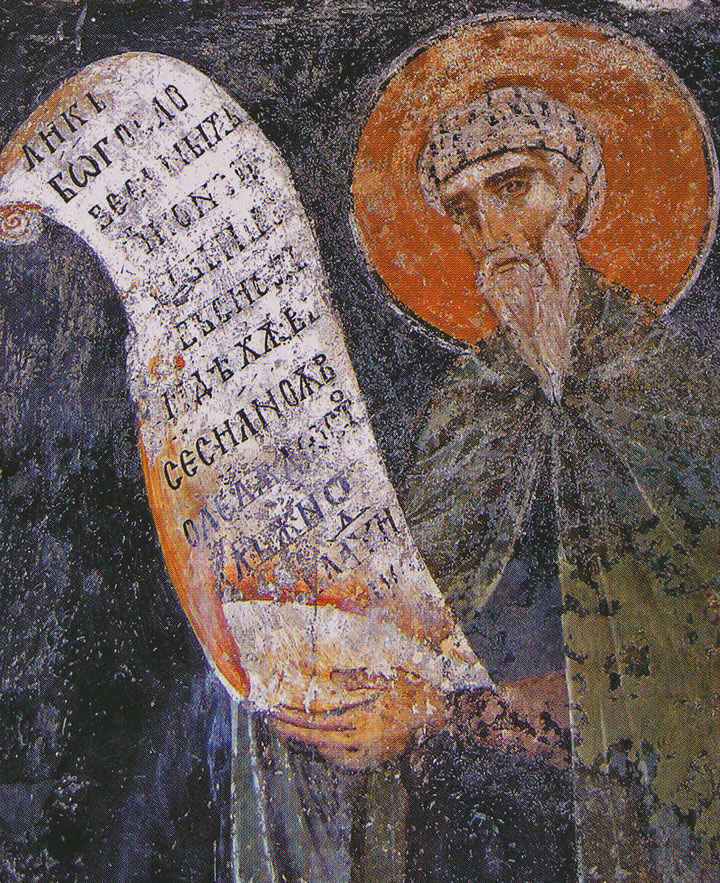 In painting buon fresco, a rough underlayer called the arriccio is added to the whole area to be painted, and allowed it to dry for some days. Many artists sketched their compositions on this underlayer, which would never be seen, in a red pigment called sinopia; these drawings are also called sinopia. Later, techniques for transferring paper drawings to the wall were developed. The main lines of the drawing were pricked over with a point, held against the wall, and a bag of soot (spolvero) banged on them on produce black dots along the lines. If a previous fresco was being painted over, the surface would be roughened to give a key. On the day of painting, a thinner, smooth layer of fine plaster, the intonaco, is added to the amount of wall that can be expected to be completed in a day, sometimes matching the contours of the figures or the landscape, but more often just starting from the top of the composition. This area is called the giornata ("day's work"), and the different day stages can usually be seen in a large fresco, by a sort of seam that separates one from the next. 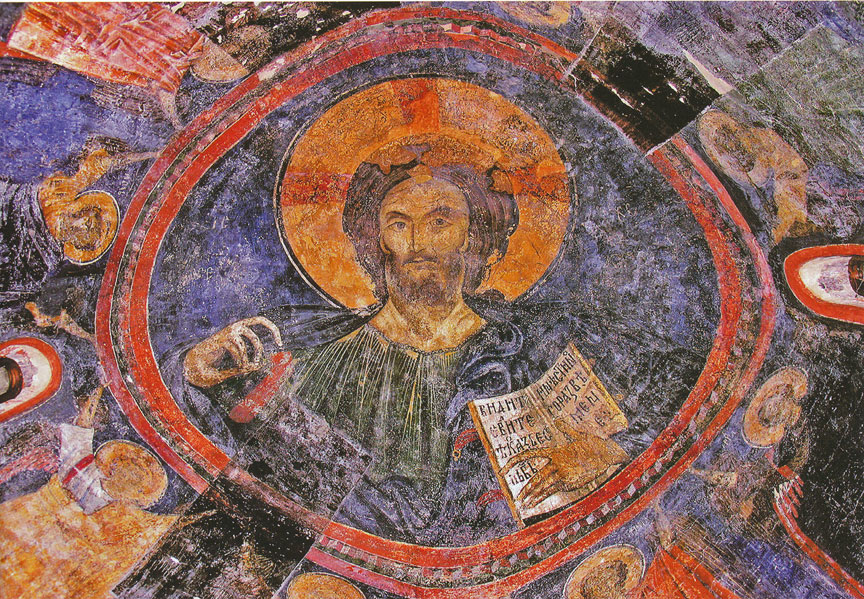 Buon frescoes are difficult to create because of the deadline associated with the drying plaster. Generally, a layer of plaster will require ten to twelve hours to dry; ideally, an artist would begin to paint after one hour and continue until two hours before the drying time—giving seven to nine hours working time. Once a giornata is dried, no more buon fresco can be done, and the unpainted intonaco must be removed with a tool before starting again the next day. If mistakes have been made, it may also be necessary to remove the whole intonaco for that area—or to change them later à secco. 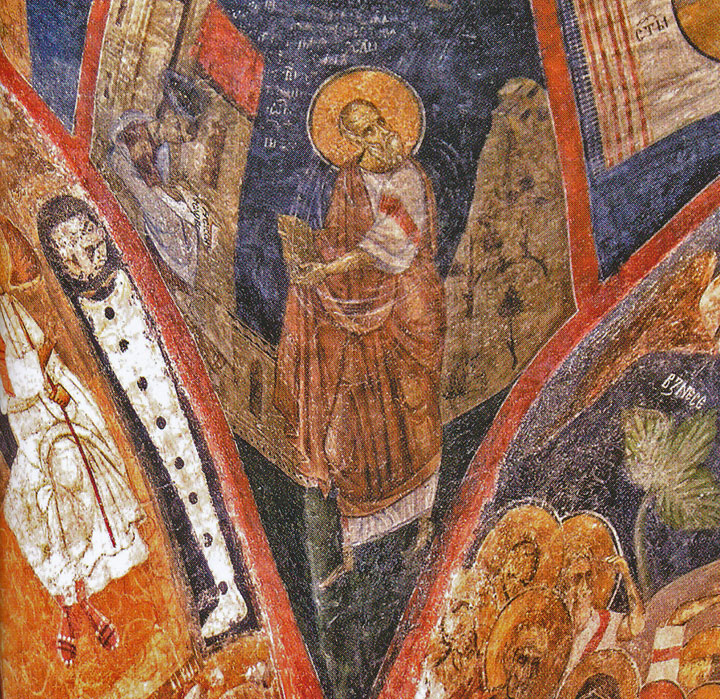 A technique as seen in the popular frescoes of Michelangelo and Raphael is to actually scrape into certain areas of the plaster while still wet to increase the illusion of depth and to accent certain areas over others. The eyes of the people of the School of athens are sunken-in using this technique which causes the eyes to seem deeper and more pensive. Michelangelo used this technique as part of his trademark 'outlining' of his central figures within his frescoes. 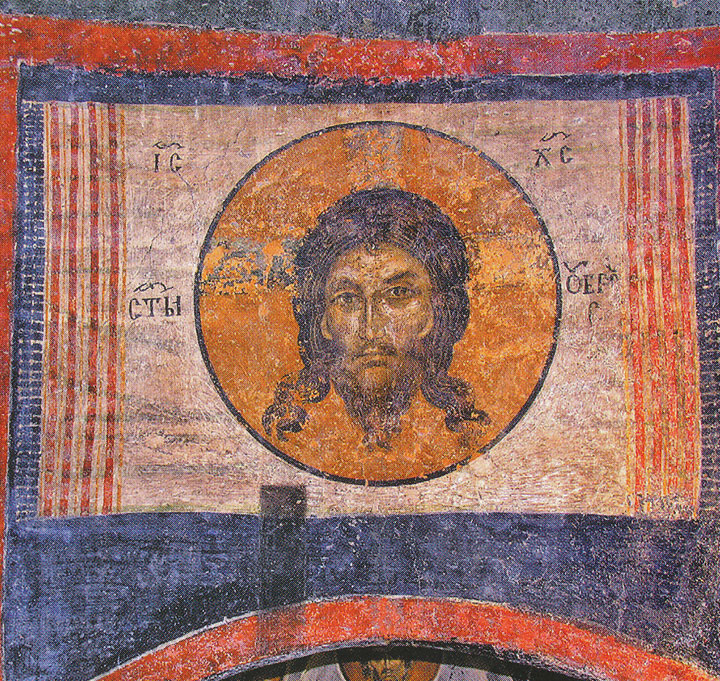 In a wall-sized fresco, there may be ten to twenty or even more giornate, or separate areas of plaster. After centuries, these giornate (originally, nearly invisible) have sometimes become visible, and in many large-scale frescoes, these divisions may be seen from the ground. Additionally, the border between giornate was often covered by à secco painting, which has since fallen off. 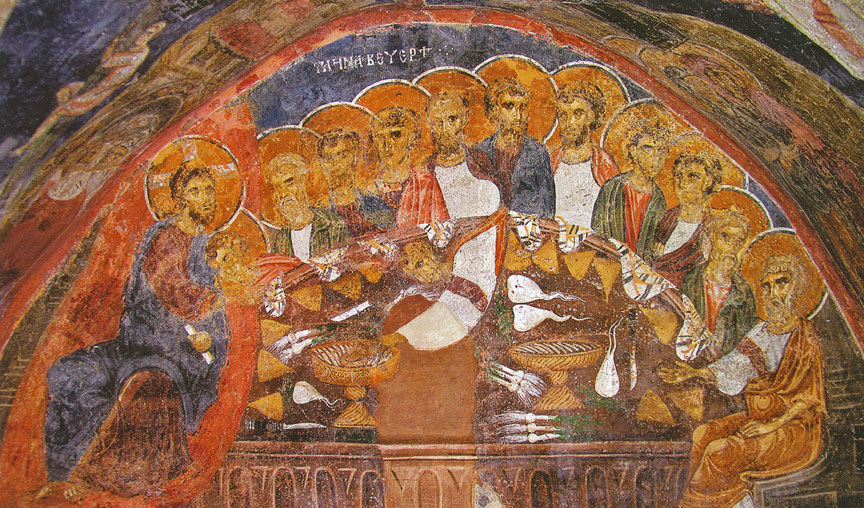 For wholly à secco work, the intonaco is laid with a rougher finish, allowed to dry completely and then usually given a key by rubbing with sand. The painter then proceeds much as he would on a canvas or wood panel. 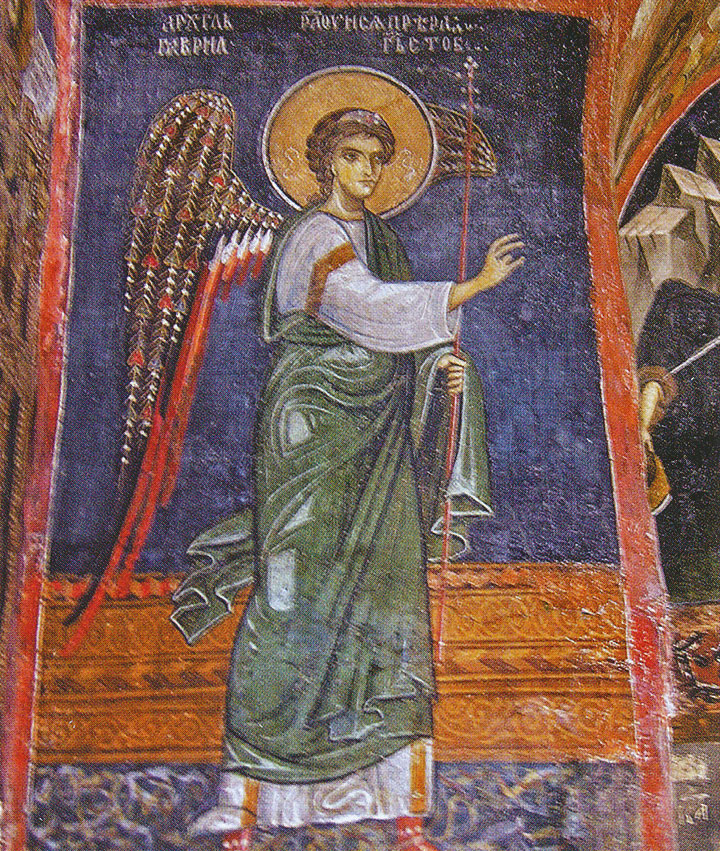 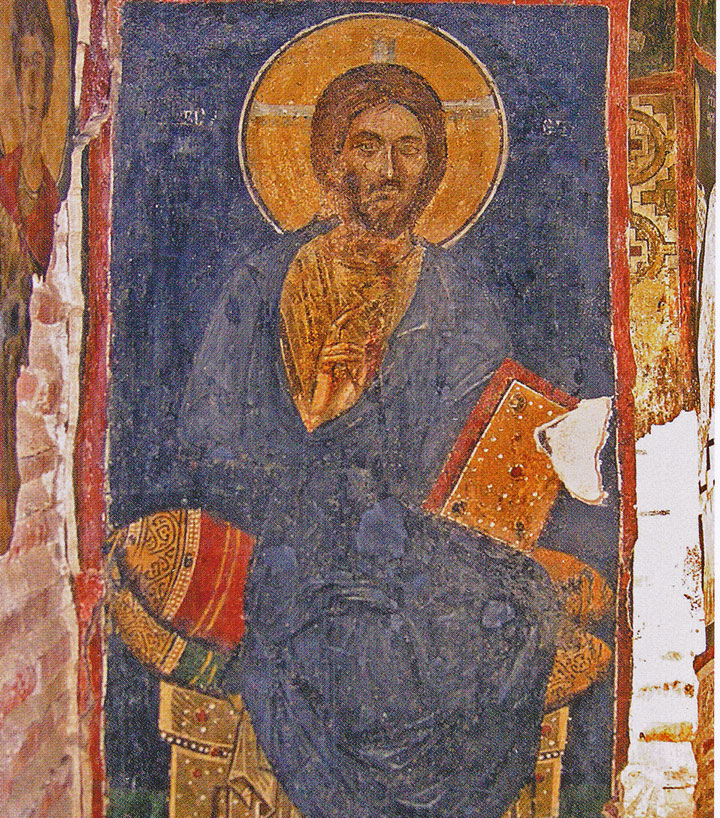 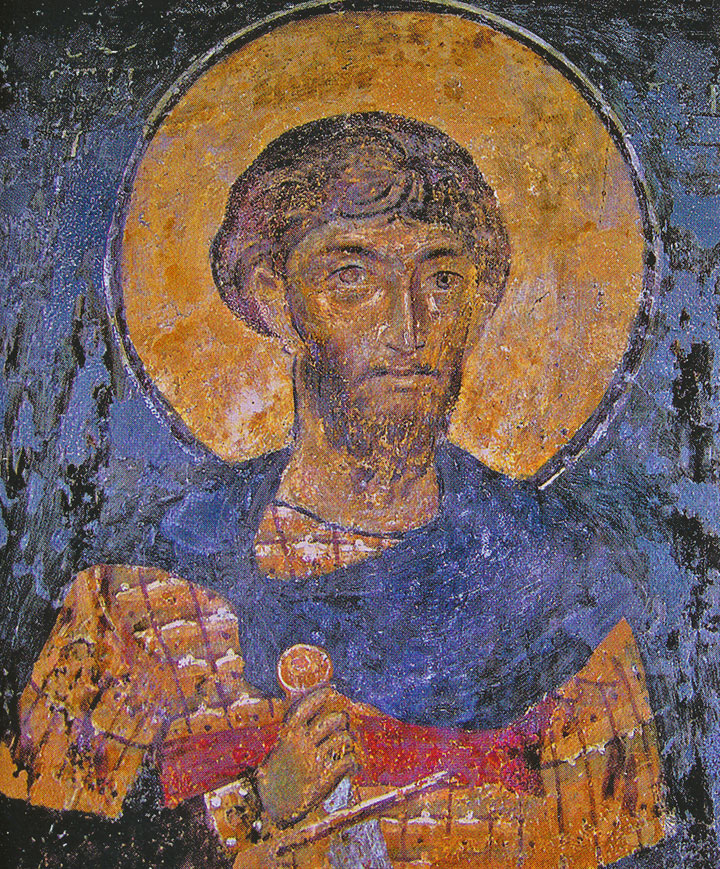 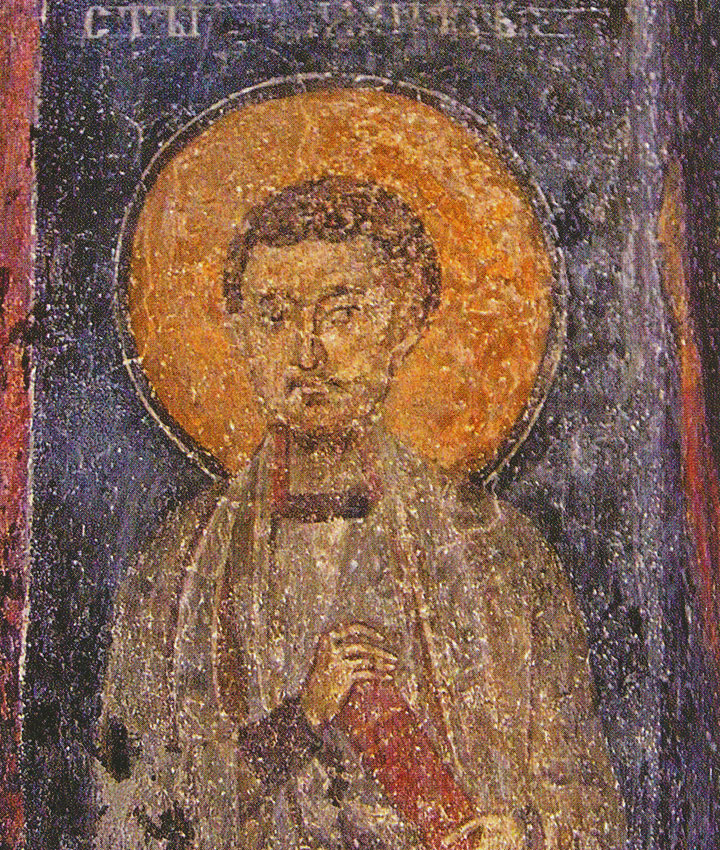 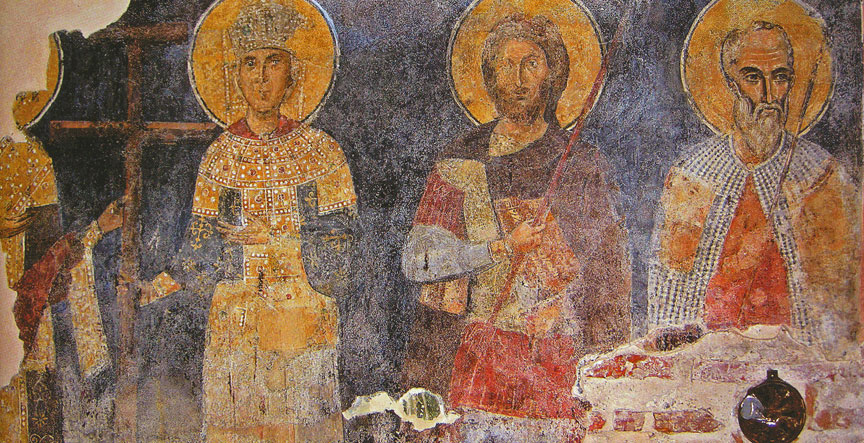 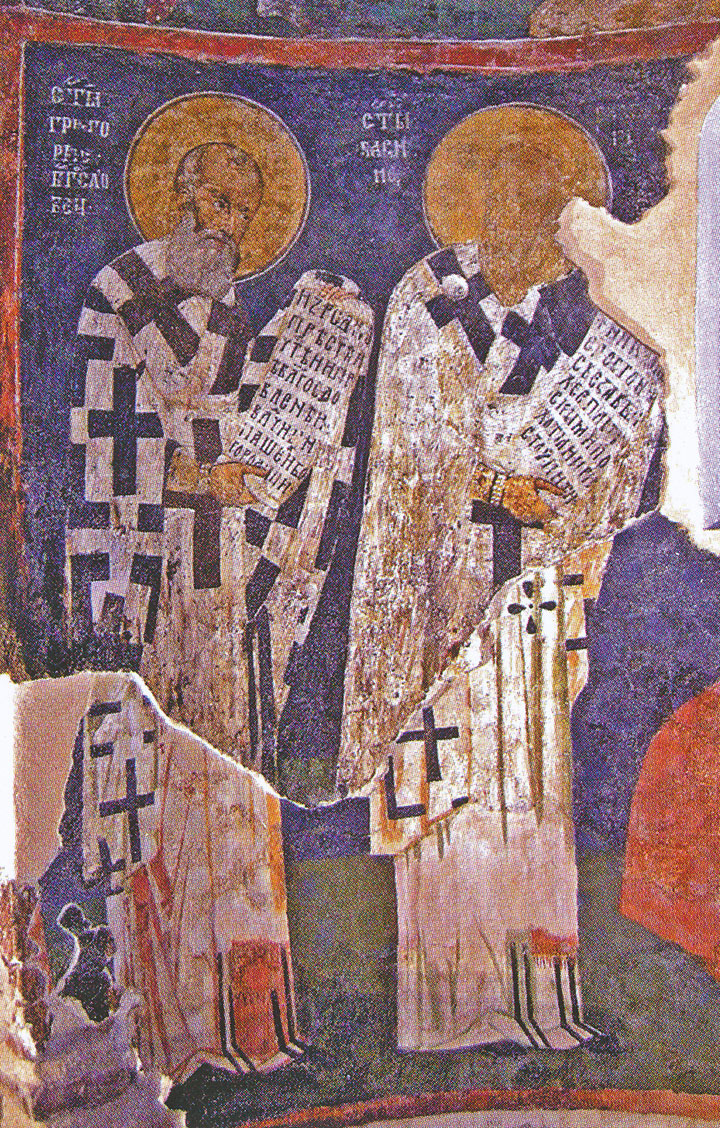 St Gregory the Theologian and St Basil the Great 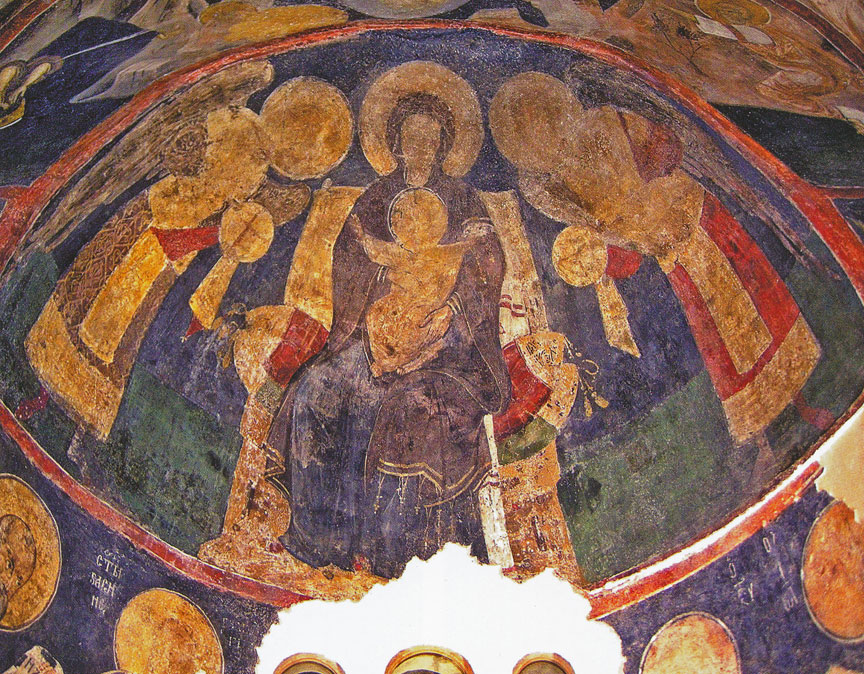 The Holy Virgin and Child Enthroned 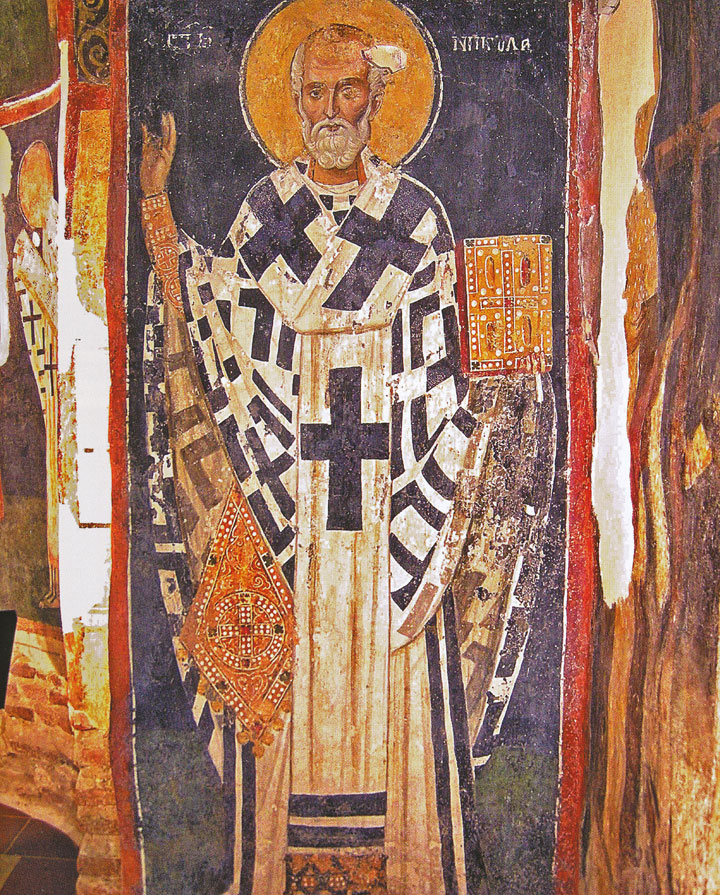 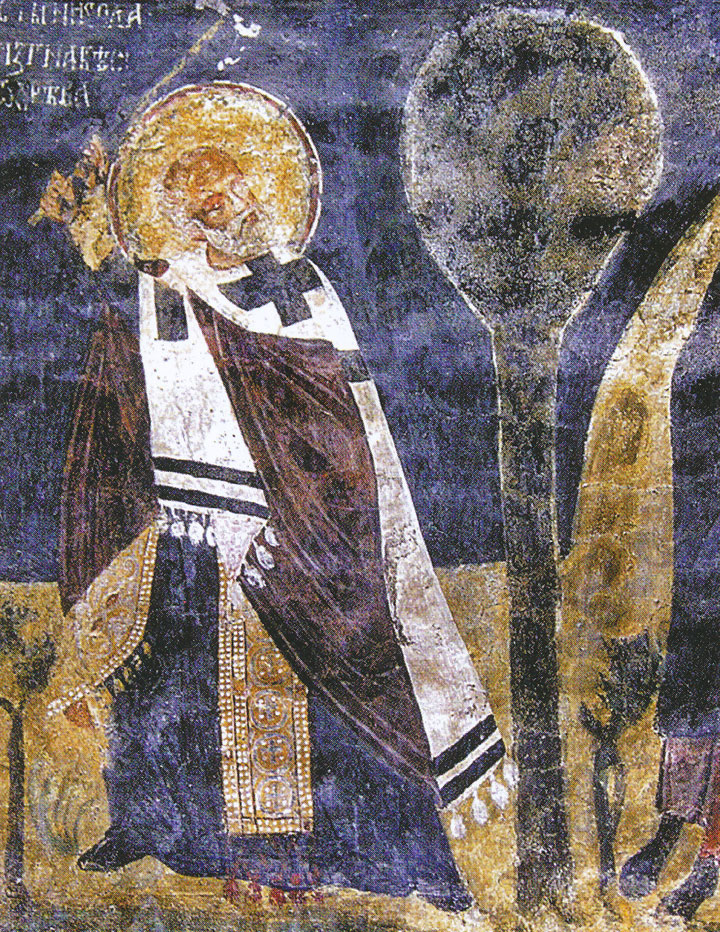 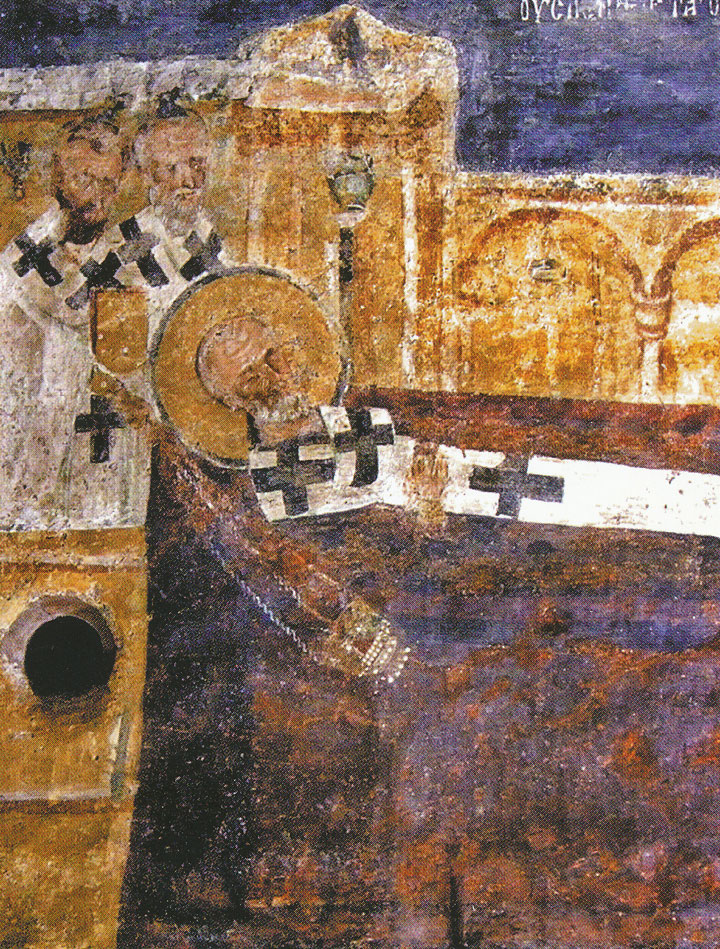 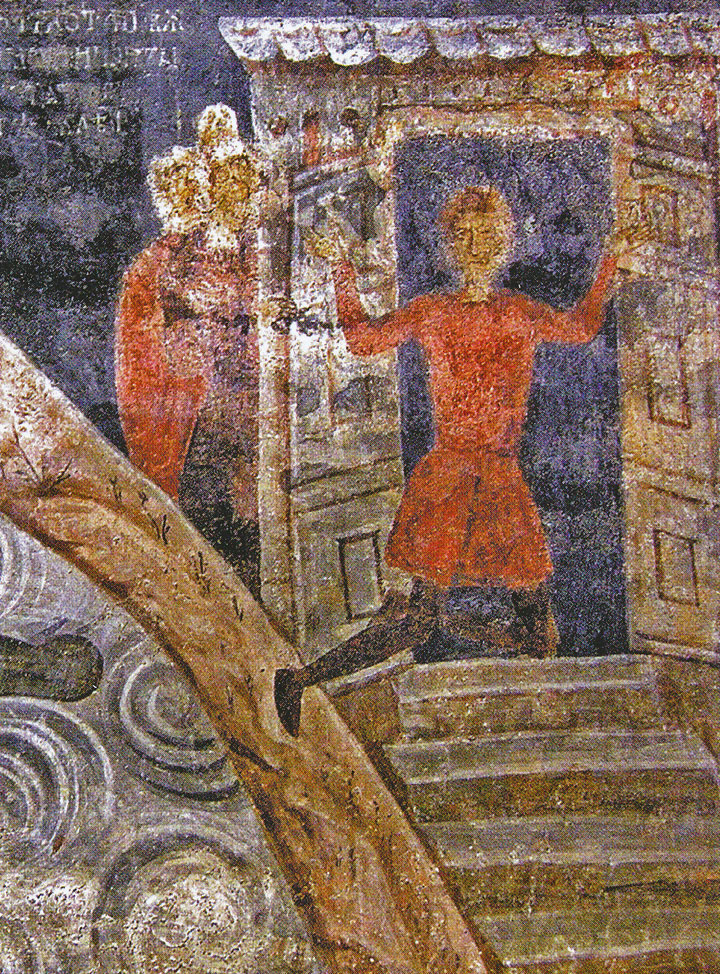 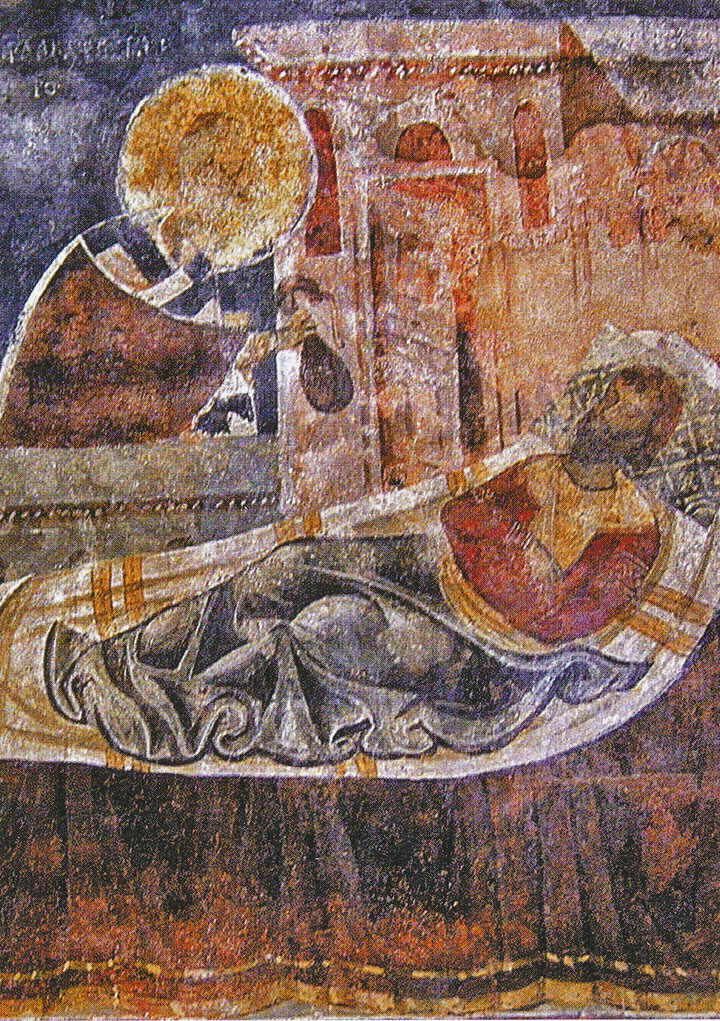 scene from life of St Nicholas 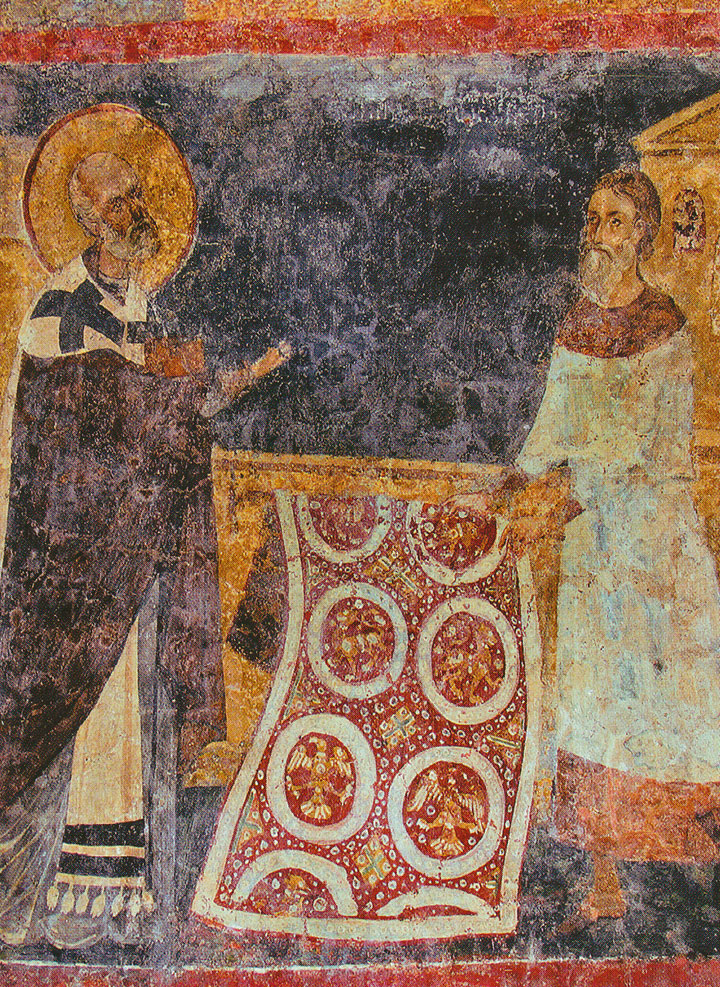 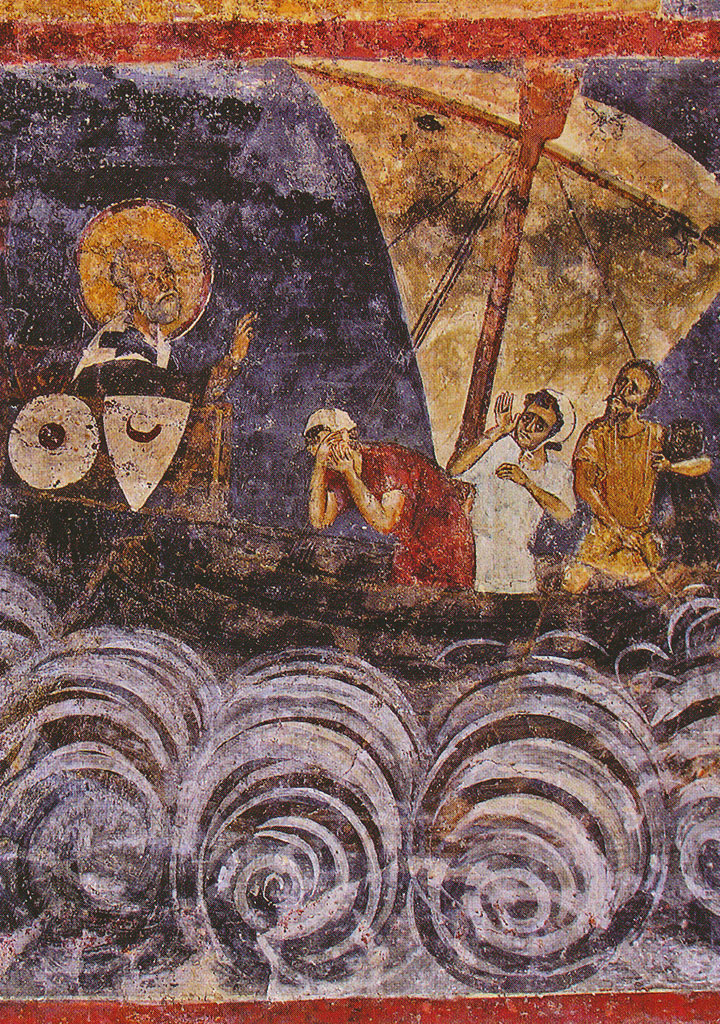 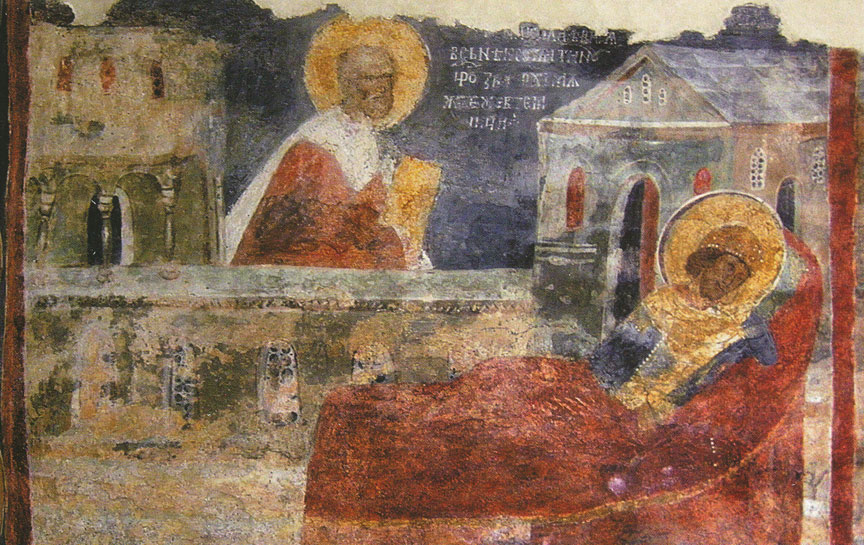 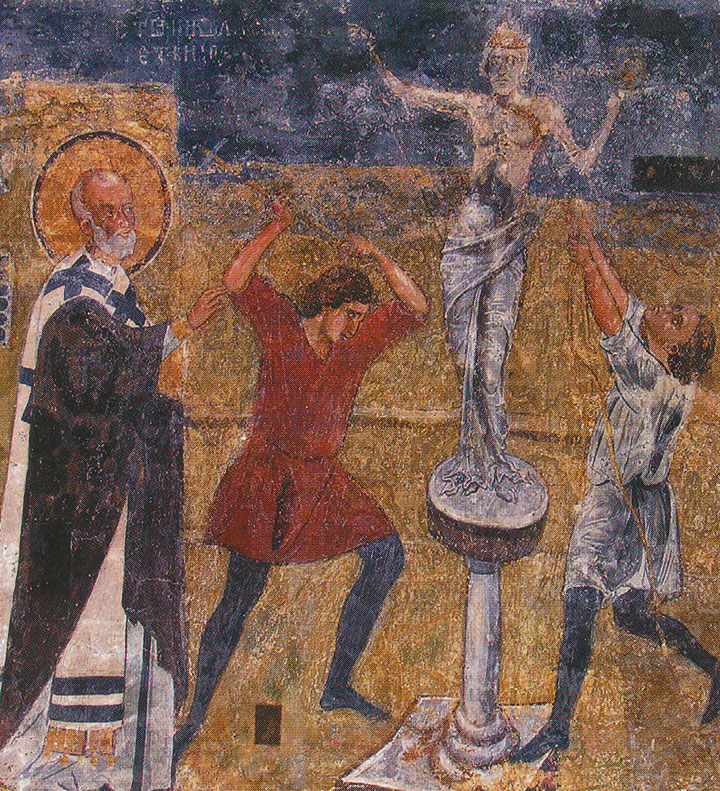 St Nicholas blessing the demolition of a Pagan Idol 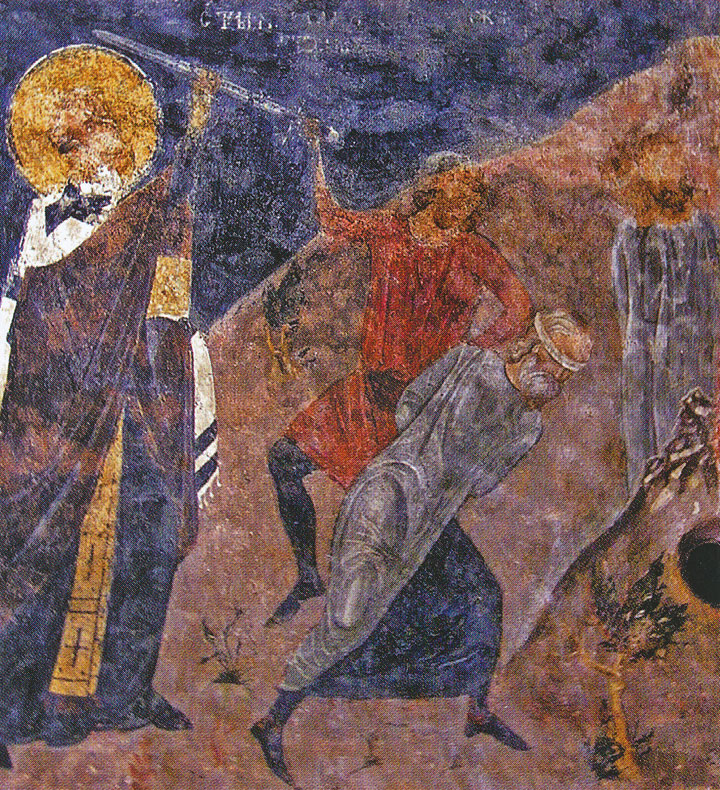 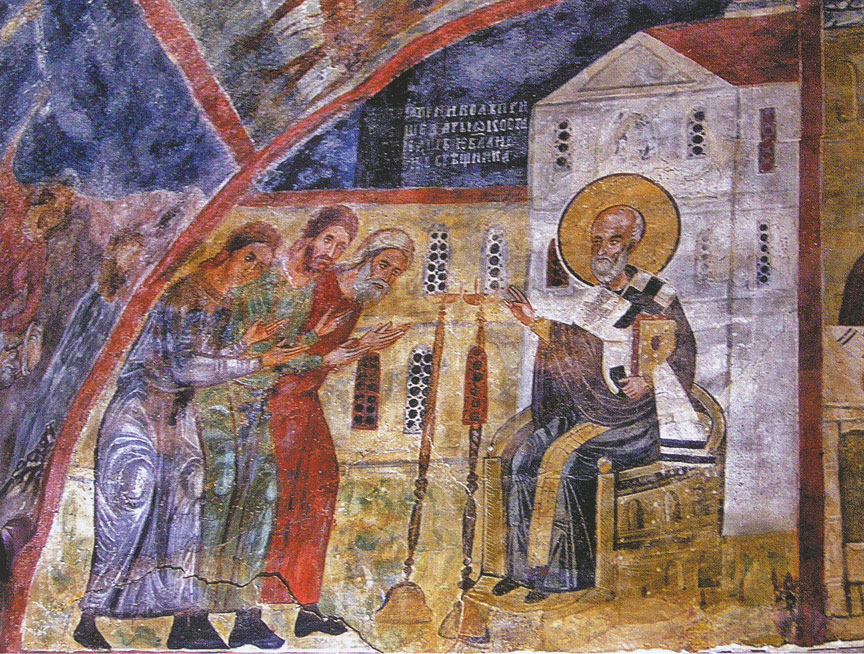 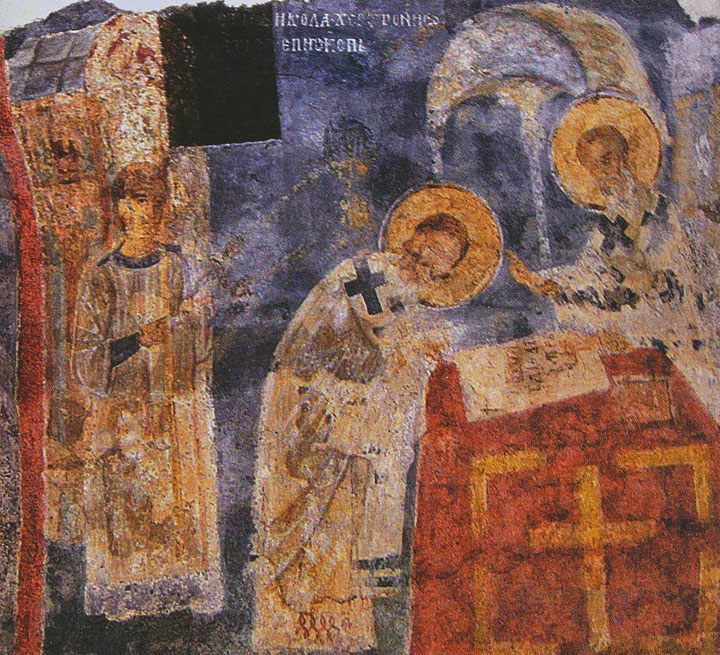 St Nicholas being consecrated a Bishop