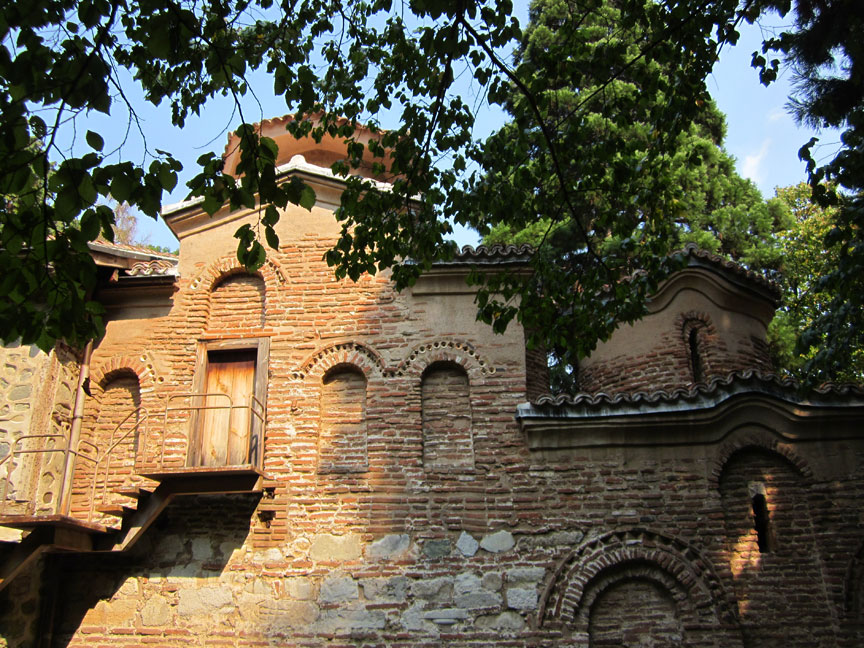 The Boyana Church (Bulgarian: Боянска църква, Boyanska tsarkva) is a medieval Bulgarian Orthodox church situated on the outskirts of Sofia, the capital of Bulgaria, in the Boyana quarter. The east wing of the two-storey church was originally constructed in the late 10th or early 11th century, then the central wing was added in the 13th century under the Second Bulgarian Empire, the whole building being finished with a further expansion to the west in the middle of the 19th century. The church owes its world fame mainly to its frescoes from 1259. They form a second layer over the paintings from earlier centuries and represent one of the most complete and well-preserved monuments of Eastern European mediaeval art. A total of 89 scenes with 240 human images are depicted on the walls of the church. The name of the painter is recently discovered during restoration. The inscription reads: "zograph Vassilii from the village Subonosha, Sersko and his apprentice Dimitar". 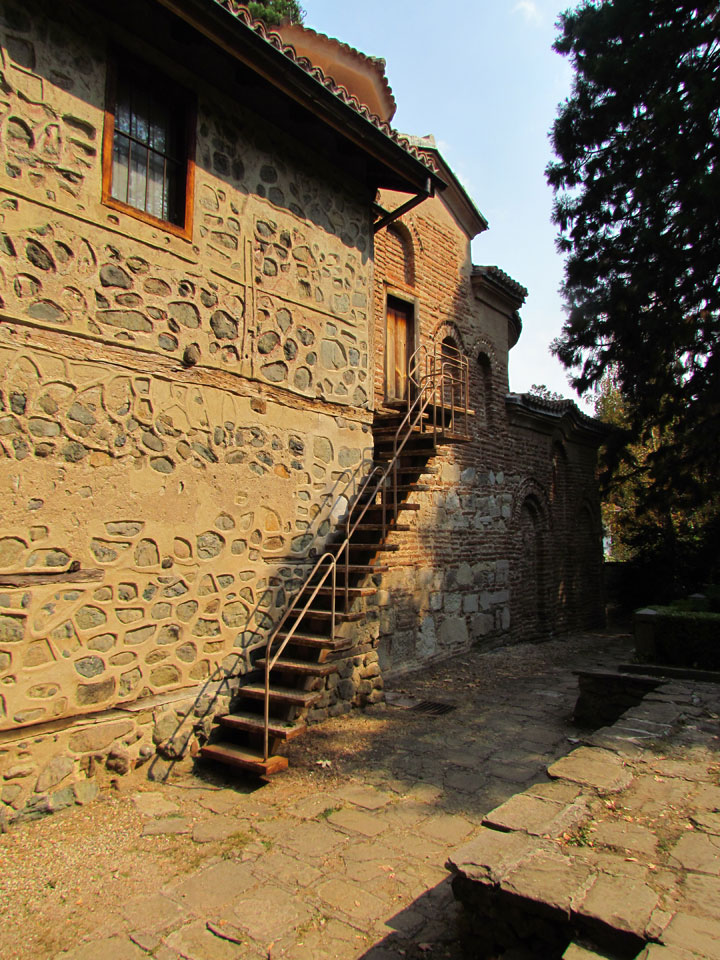 National Museum of History director Bozhidar Dimitrov stated: "The renovation revealed a rare inscription under a layer of plaster on one of the church walls: 'I, Vasiliy' inscribed. We now know the painter with certainty. The 13th-century 'Boyana master' was the only painter among the kings and nobles whose names were read out on a regular basis during sermons at the church." Restorator Grigoriy Grigorov stated the reason: "The Christian Orthodox religion forbids the painter from manifesting himself, as in the eyes of the priests it is God who guides his hand. But this painter inscribed his name, knowing that the believers could not see it." 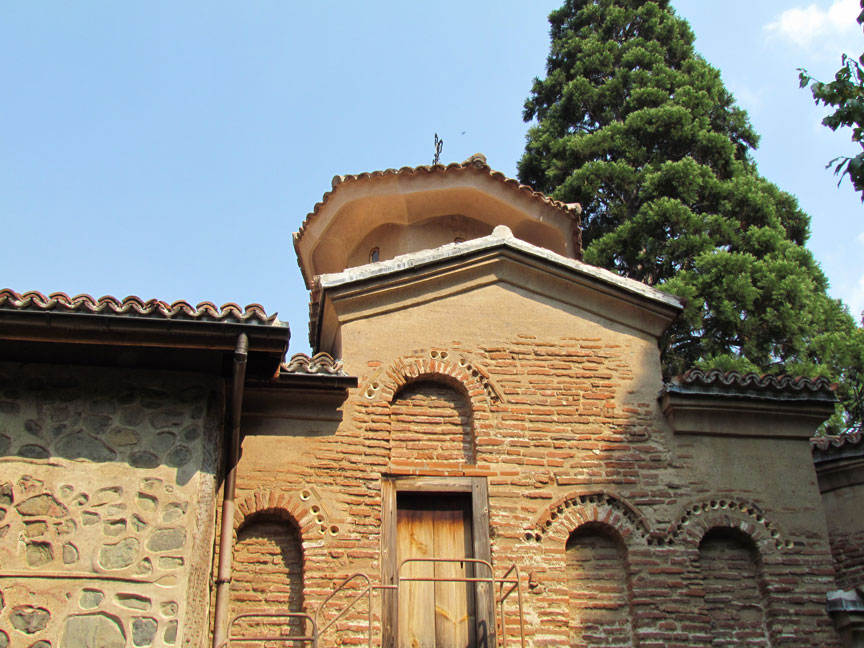 18 scenes in the narthex depict the life of Saint Nicholas. The painter here drew certain aspects of contemporary lifestyle. In The Miracle at Sea, the ship and the sailors' hats recall the Venetian fleet. The portraits of the patrons of the church — Sebastocrator Kaloyan and his wife Desislava, as well as those of Bulgarian tsar Constantine Tikh and Tsaritsa Irina, are thought to be among the most impressive and lifelike frescoes in the church, and are located on the north wall of the church. 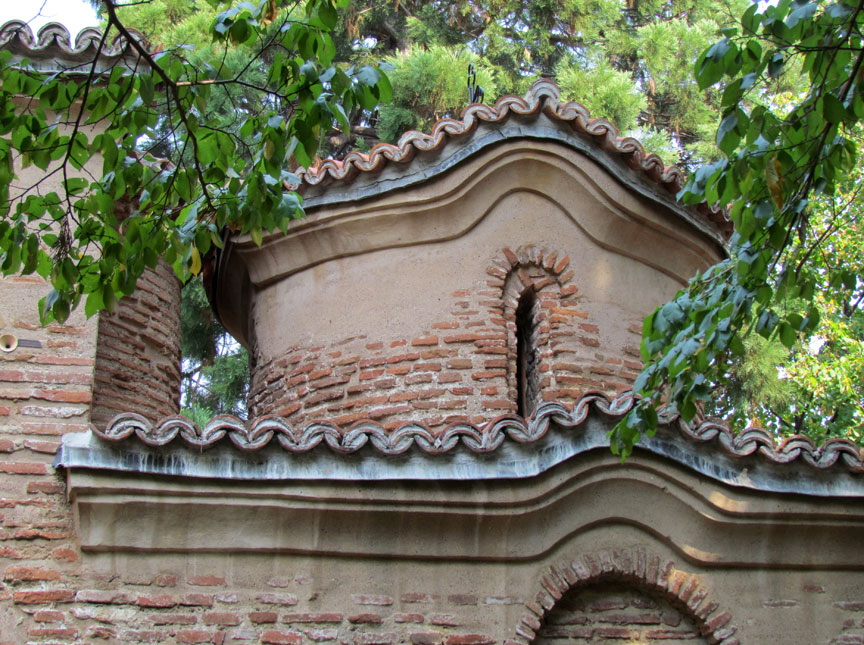 Besides the first layer of 11th-12th century frescoes, of which only fragments are preserved, and the famous second layer of murals from 1259, the church also has a smaller number of later frescoes from the 14th and 16th-17th century, as well as from 1882. 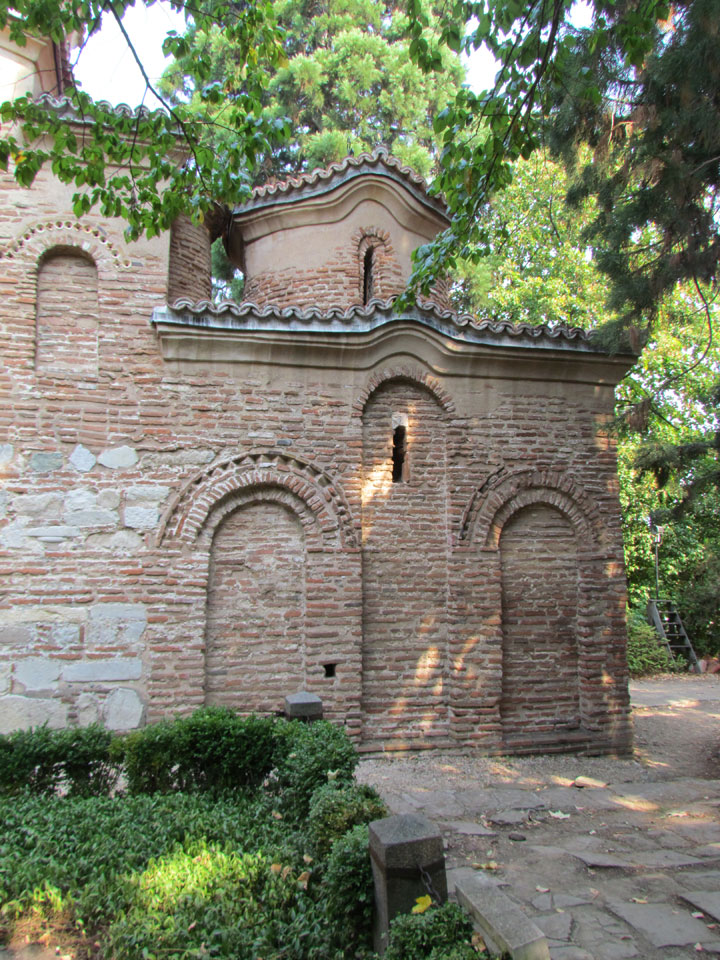 The monument was added to the UNESCO World Heritage List in 1979. The frescoes were restored and cleaned in 1912-1915 by an Austrian and a Bulgarian specialist, as well in 1934 and 1944. The church was closed for the public in 1977 in order to be conservated and restored and once again opened in 2000. 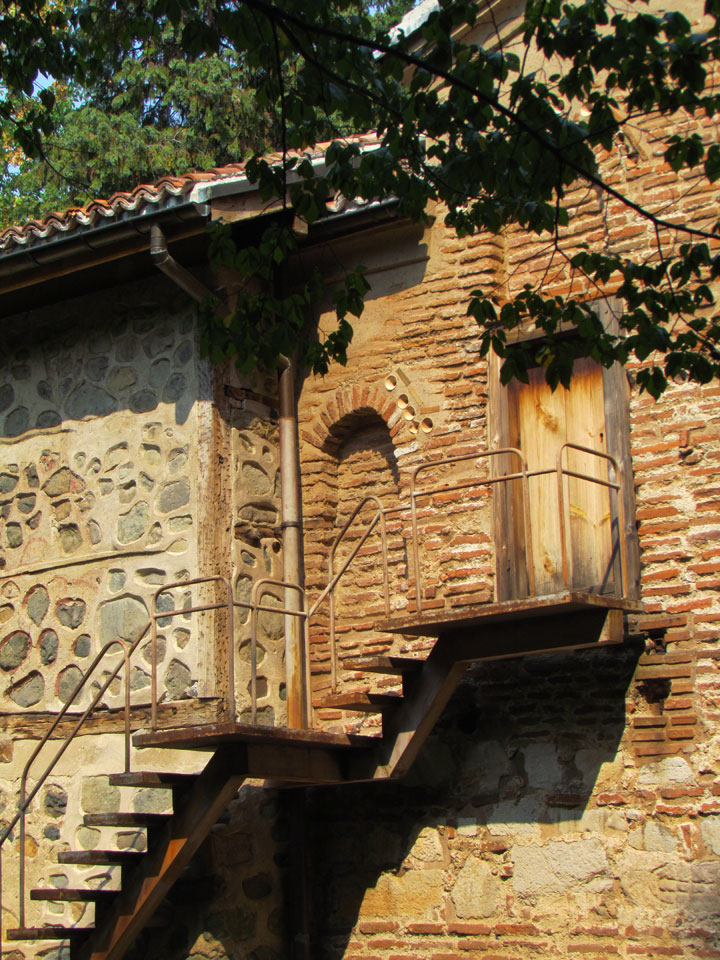 This immaculate temple of the Holy hierarch Nicholas and martyr Panteleimon was erected from the ground and created with the funds, care and great love of Kaloyan, sebastokrator, cousin of the Tsar, grandson of Saint Stephen, King of Serbia. This was written in the Bulgarian Empire under the pious and devout Tsar Constantine Asen. Indiction 7 of the year 6767 [1259]. 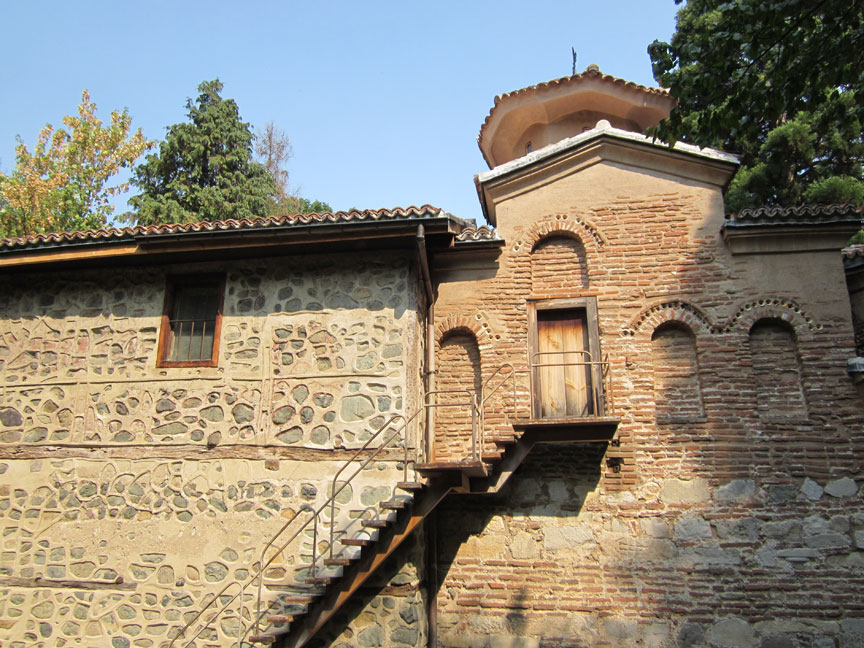 The Boyana Church was built in three stages: in the late 10th and early 11th, the mid-13th, and the mid-19th centuries. The oldest section (the eastern church) is a small one-apse cross-vaulted church with inbuilt cruciform supports. It was built in the late 10th and early 11th century. The second section, which adjoins the eastern church, was commissioned by Sebastocrator Kaloyan and his wife Dessislava and in the mid-13th century. This building belongs to the two-floor tomb-church type. It consists of a ground-floor family sepulchre with a semi-cylindrical vault and two arcosolia on the north and south walls, and an upper-floor family chapel identical in design to the eastern church. The exterior is decorated with ceramic ornaments. The last section was built on donations from the local community in the mid-19th century. 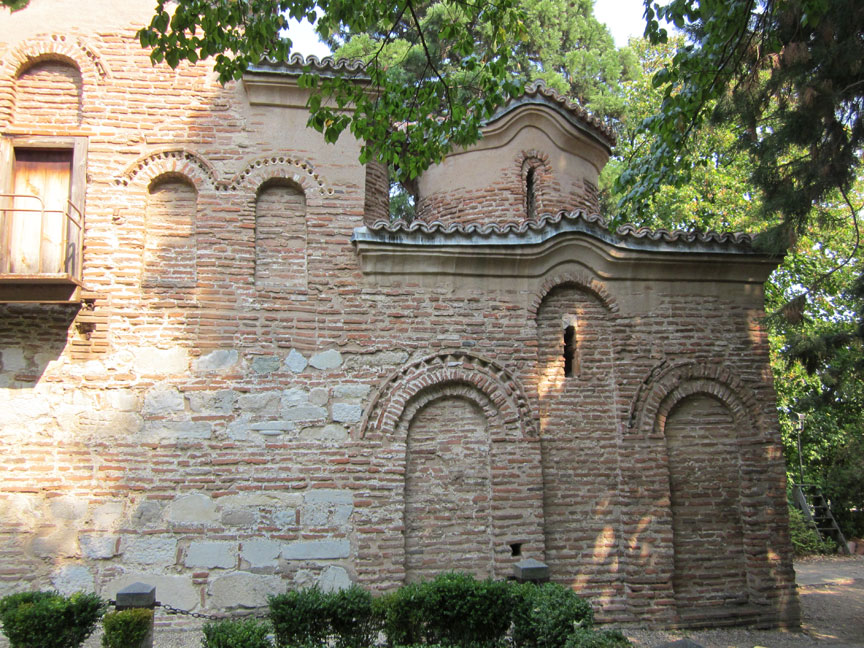 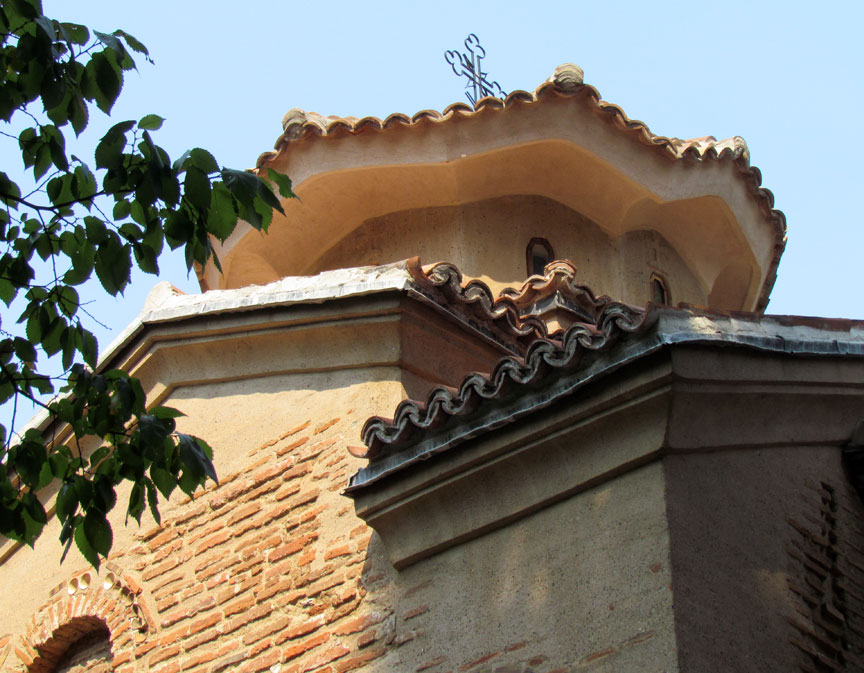 The first layer of frescoes, which originally covered the entire eastern church, dates from the 11th-12th-century. Fragments of those frescoes have been preserved in the lower parts of the apse and the north wall, and in the upper part of the west wall and the south vault. 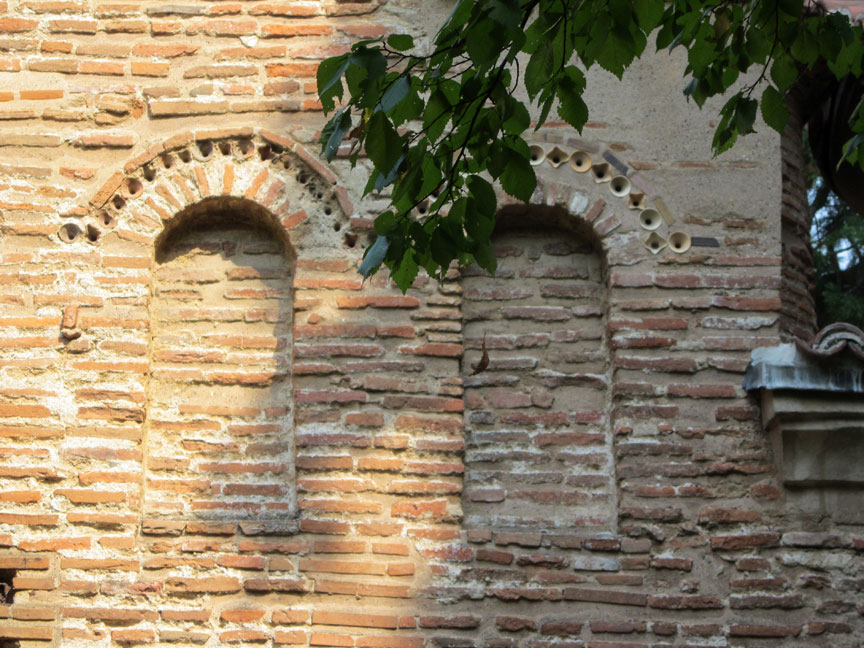 According to the donor’s inscription on the north wall of the second section, the second layer of frescoes dates from 1259. Those frescoes were painted over the earlier layer by a team of unknown artists, who also decorated the two floors of the building commissioned by Sebastocrator Kaloyan. 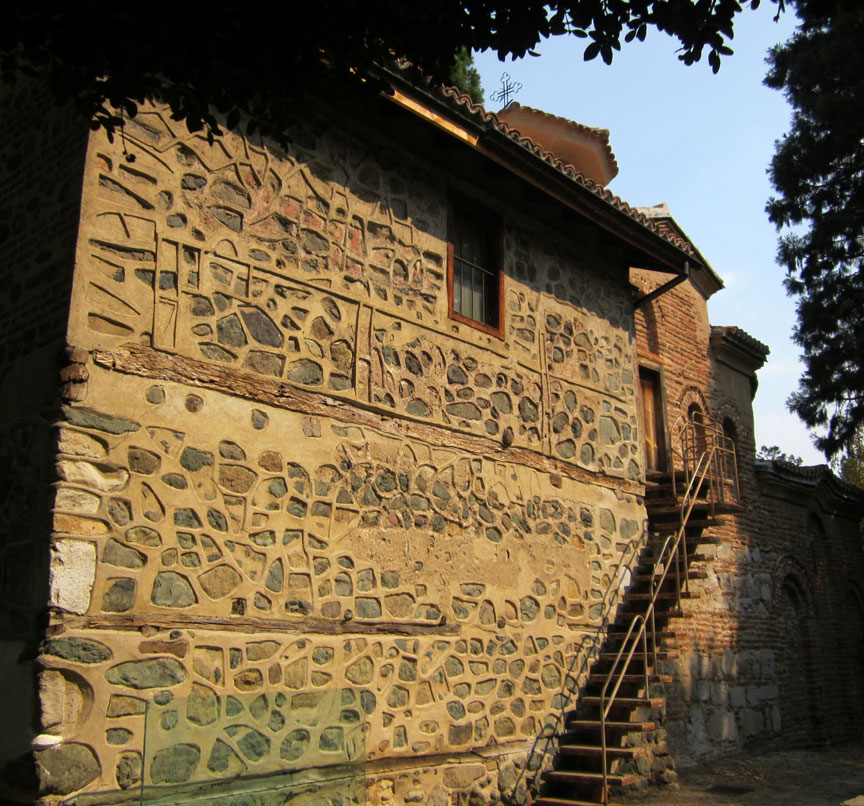 The Boyana Church owes its world fame above all to the frescoes from 1259, which demonstrate the exceptional achievements of mediaeval Bulgarian culture. The majority of the more than 240 figures depicted here display individuality, remarkable psychological insight and vitality. The frescoes follow the canon of icon-painting established by the Seventh Ecumenical Council held in Nicaea in 787. 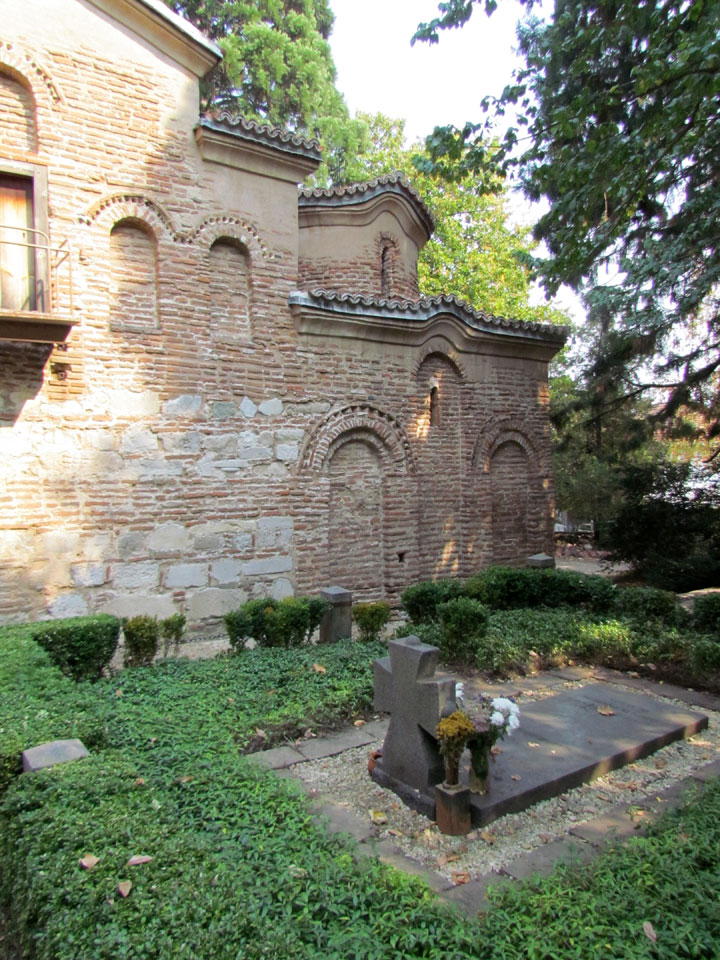 The frescoes in the oldest section of the church include a magnificent representation of Christ Pantocrator in the dome. The drum below shows a host of angels, with the Four Evangelists - Matthew, Mark, Luke and John - portrayed in the pendentives. Four images of Christ adorn the face of the arches: Christ Emmanuel; Christ, The Ancient of Days; and the acheiropoietic (“made without hands”) Holy Mandylion and Holy Tile. Next come scenes from the Major Feast Days and the Passions of Christ. Among the full-length portrayals of saints in the first tier, there are ten warrior saints. The Virgin Enthroned, surrounded by archangels, is represented in the altar conch. Below are four church fathers: St. Gregory the Theologian, Basil the Great, John Chrysostom and Patriarch Germanus. The frescoes flanking the altar show the deacons Laurentius, Euplius and Stephen, as well as St. Nicholas, the patron of the ground floor of the church - one of the most popular saints and the patron saint of sailors, merchants and bankers. 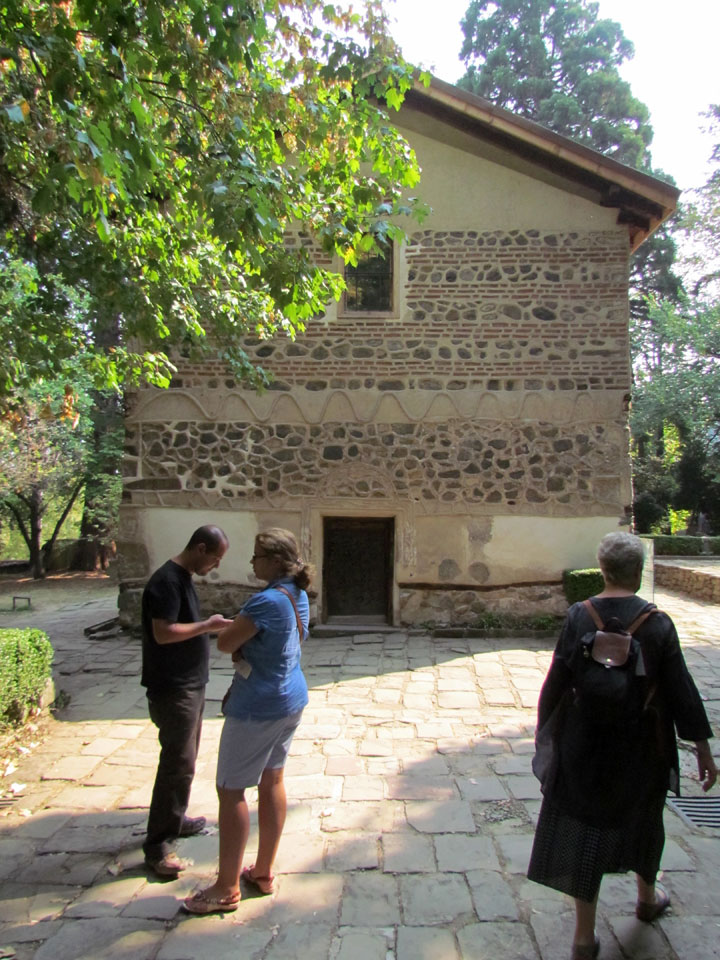 entrance to the newer church

The life of St. Nicholas is depicted in 18 scenes in the narthex (the second section of the church). The unknown artist included elements of contemporary life in those scenes, and many of the figures are quite realistic - especially their countenances. The lunette above the entrance of the narthex displays the Virgin and Child, St. Anna and St. Joachim, and Christ Blessing. St. Catherine, St. Marina, St. Theodore the Studite and St. Pachomius are portrayed in the lower tiers on the walls. The south arcosolium features the scene of Christ Disputing with the Doctors, and the north one, the Presentation of the Virgin. Two highly revered Bulgarian saints are also represented in the narthex - St. John of Rila (the oldest surviving representation of the saint) and St. Paraskeva (Petka). The hermit St. Ephraim Syrus appears among the monks portrayed here. The expressive realistic portraits of the donors Sebastocrator Kaloyan and his wife Dessislava, and of the Bulgarian Tsar Constantine Asen Tikh and Tsaritsa Irina - painted with precision, extraordinary skill and feeling - are among the oldest portraits of figures from Bulgarian history. 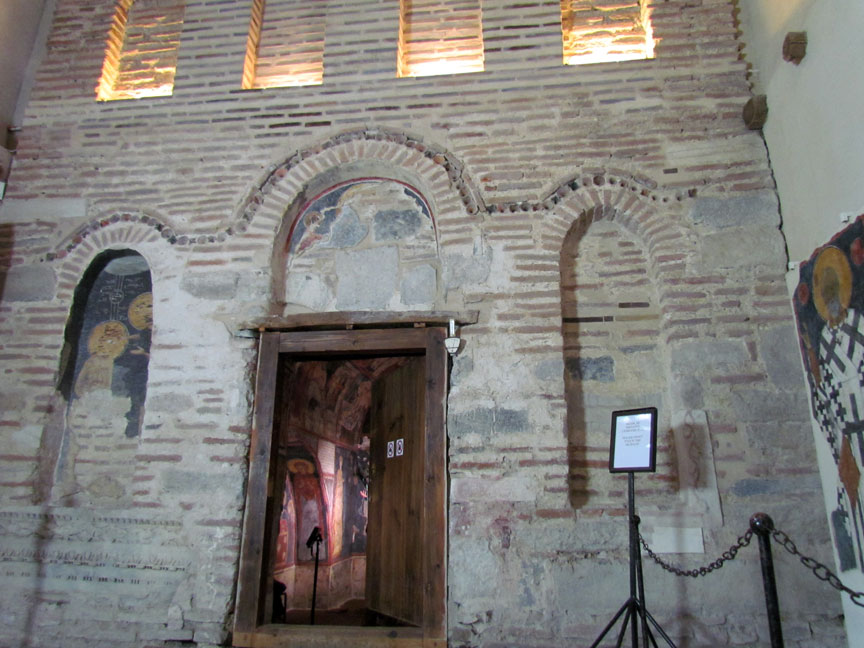 interior entrance to the older church

Today the name “Boyana Master” stands for the team of unknown artists who decorated the church and mastered their art in the studios of the Turnovo School of Painting. The frescoes are genuine masterpieces with a flawless technique, psychological depth, complexity and realism. Boyana is the only and the most impressive wholly preserved monument of the Turnovo School of Painting from the 13th century. 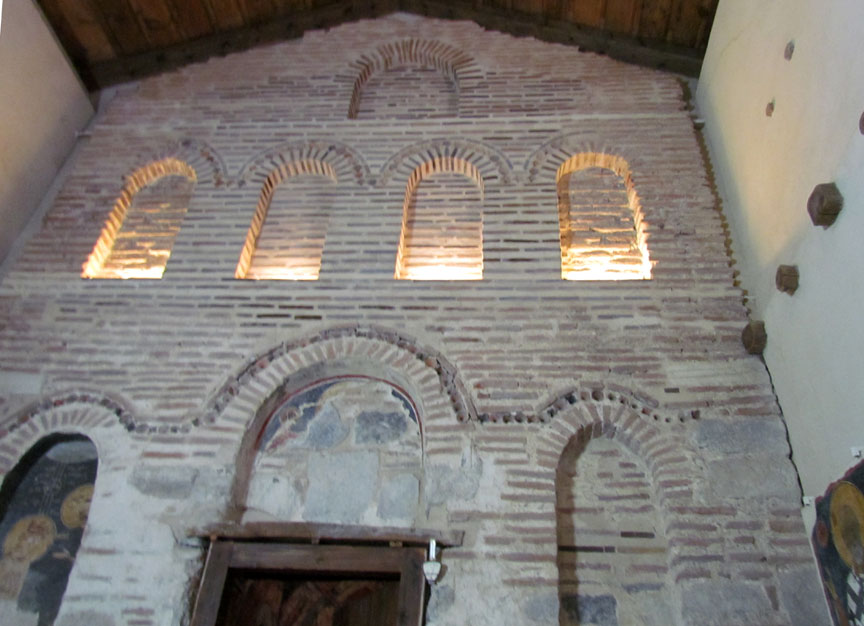 According to many leading experts, the world famous frescoes in the Boyana Church played an important role in the development of mediaeval Bulgarian and European painting. 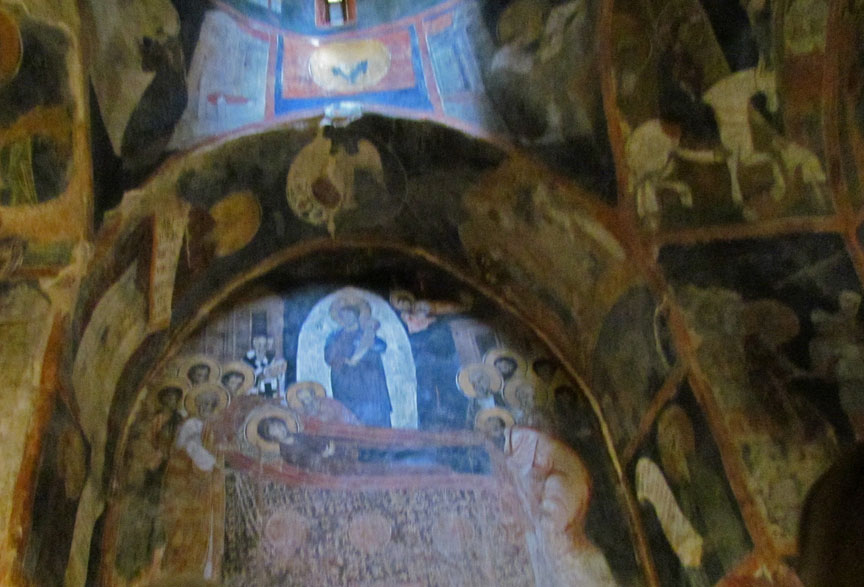 Some parts of the church were overpainted, and the majority of those frescoes have survived to the present day. The later frescoes include a scene of the Presentation of the Virgin from the 14th century, a portrait of St. Nicholas from the 16th-17th century, and representations of the two patron saints of the Boyana Church - St. Nicholas and St. Panteleimon - from 1882. 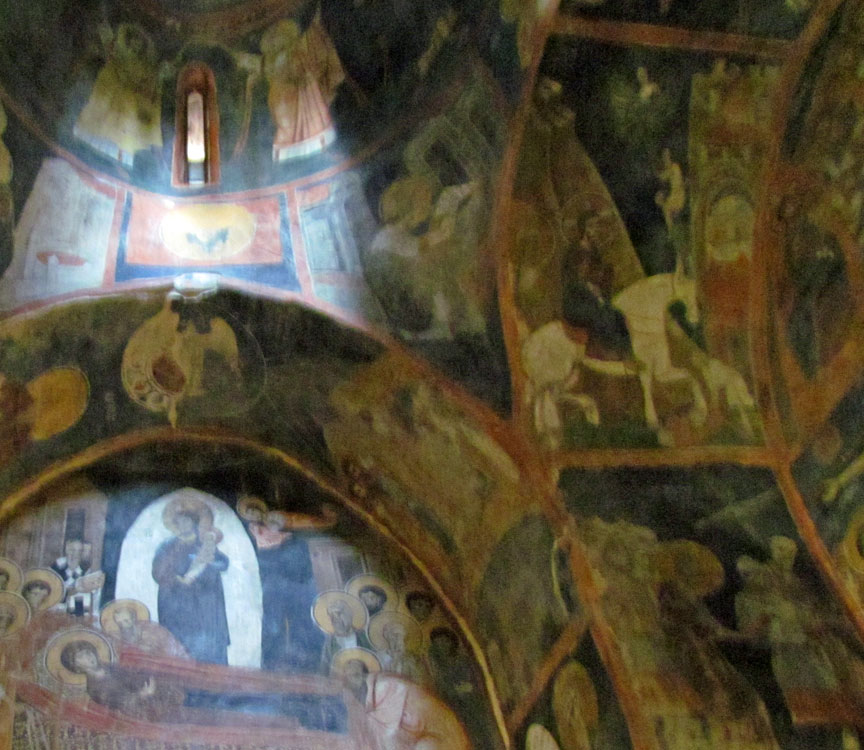 The Boyana Church was officially opened in the February 10, 2008 official ceremony which formally ended the (2006-2008) 400,000 leva ( 200 000 EUR) restoration works, with funding of the initiative "The eternal buildings of Bulgaria". The Church has now an air-conditioning system to keep the temperature at 17-18 degrees Celsius (62-64 Fahrenheit), while the special lighting system does not emits heat, and visitors are only allowed 15 minutes for entries. Currently under the management of the National Museum of History, Culture Minister Stefan Danailov marked its full opening on October 2, 2008.