photos and comments courtesy of

Calhau, on São Vicente Island, Cape Verde, under the shadow of an extinct volcano.
Cape Verde islands are of volcanic origin.  São Vicente is one of the most arid. 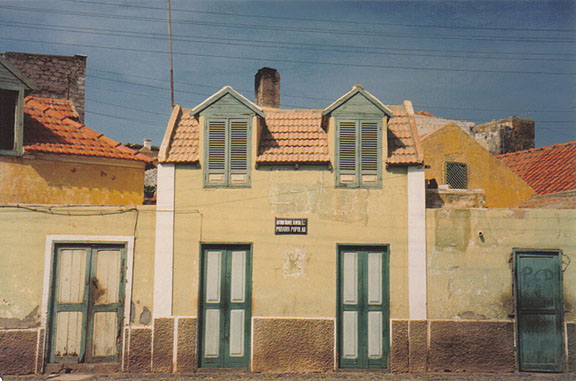 An old-fashioned shop façade of a bakery in Mindelo, capital of São Vicente Island. 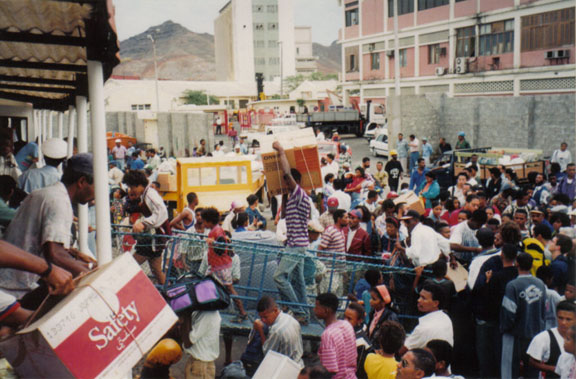 In the Porto Grande, the port of Mindelo.
Scene of the embarking for the ferry to Santo Antão Island
(one hour trip across the channel that separates it from São Vicente).
The official with the white cap and light-blue shirt at left, on board, is in charge of this confusing operation. 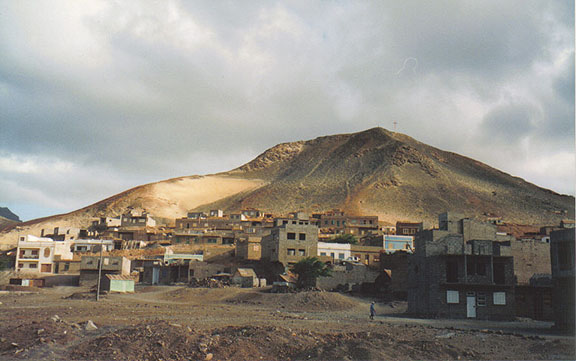 A slum area in the outskirts of Mindelo, São Vicente Island. 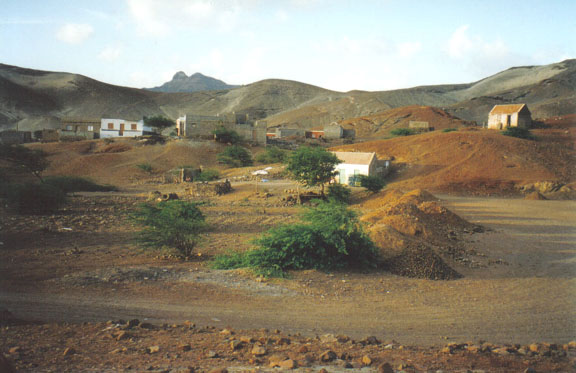 Interior of São Vicente Island,  near the outskirts of Mindelo. 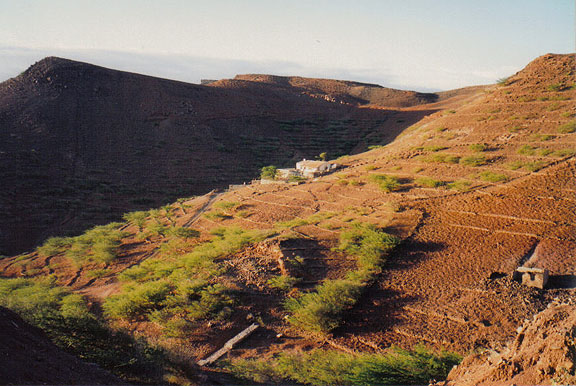 Interior of São Vicente Island, on the road from Mindelo to Baía das Gatas.
The small trees are acacias, used to try to halt erosion - with little success. 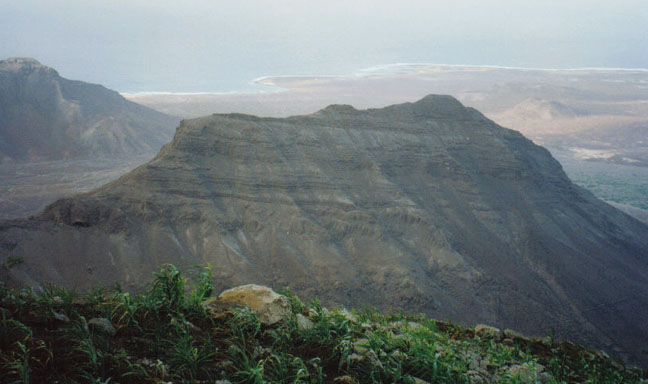 Monte Verde, São Vicente Island.
This mountain is the highest on São Vicente: 750 m / 2,539 ft.
It's one of the few places on the island that is always green, owing to the clouds' humidity. 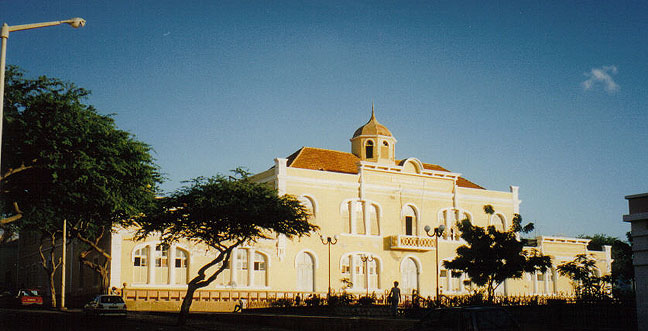 A good example of colonial architecture in Mindelo, during Portuguese rule.
Since independence this secondary school is called Liceu Jorge Barbosa. 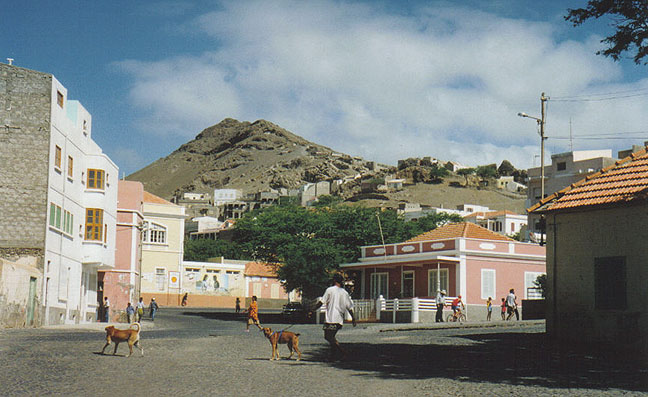 Street scene in Mindelo, not far from the town center
(the slum outskirts in background) 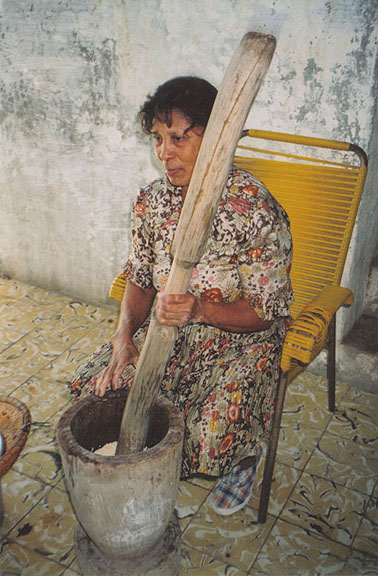 Nha Dada (Ms Eduarda) working with the pestle. Nha Dada once worked for my parents-in-law. She is mulatto (mestizo), like most Capeverdeans. But she's from Fogo Island and she has lighter skin color than the average Capeverdians. It happens with people from Fogo, despite you find from very dark to virtually white people in every island. Anyway, they are famous some mulatto people from Fogo that display blond hair and blue eyes on a brown skin. That's the Capeverdean unique mix! 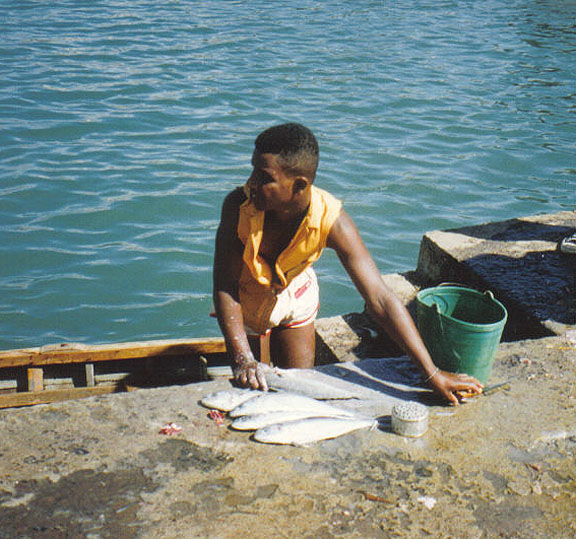 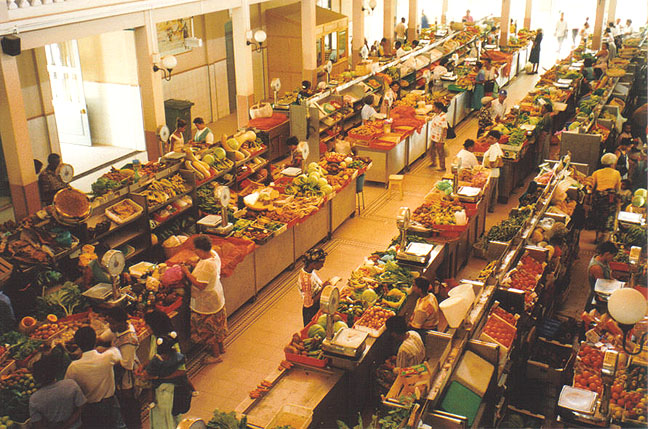 The Mercado Municipal (Municipal Market) in Mindelo city.
Another colonial building.  It still has a Portuguese coat of arms on the façade.

Of the former Portuguese colonies, Cape Verde is the one where the cultural colonial heritage was more preserved. I think it was a good policy. Despite I don't agree with colonialism, I think that history is unchangeable and it is part of the cultural heritage.

In such a dry, barren island, where does the produce in this market come from? I guess most comes from neighboring Santo Antão Island, the most humid of the archipelago. A good part is imported from abroad. And there is also agricultural produce from other islands, especially Santiago and Fogo. A few items are produced in little farms in São Vicente, like oases, mainly from the areas of Calhau Valley and Ribeira de Vinha. 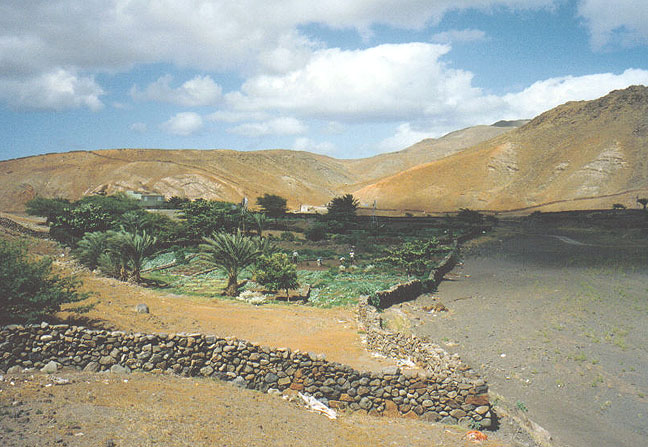 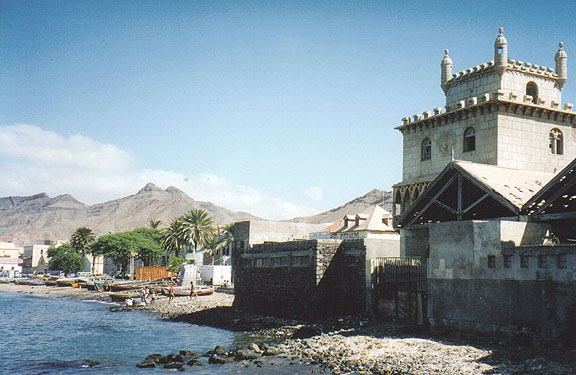 Mindelo city, São Vicente Island.
Replica of the Lisbon's Tower of Belém.
It was the Capitania (Captaincy) in the colonial era.
Now it is being restored for a museum. 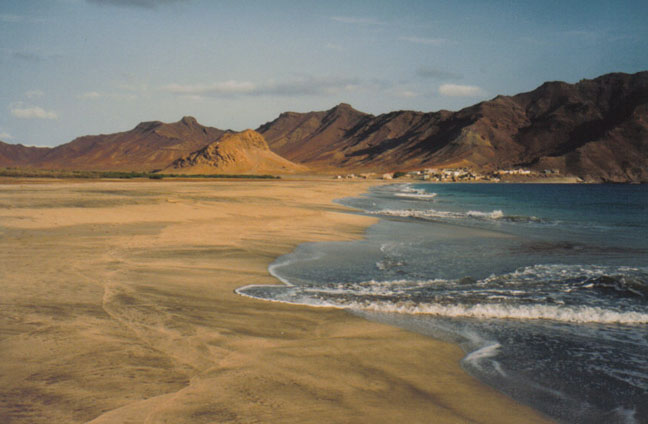 The sandy beach and the village of São Pedro, São Vicente.

Photos of other of the Cape Verde Islands

My many thanks to Francisco Santos for sharing these photos. 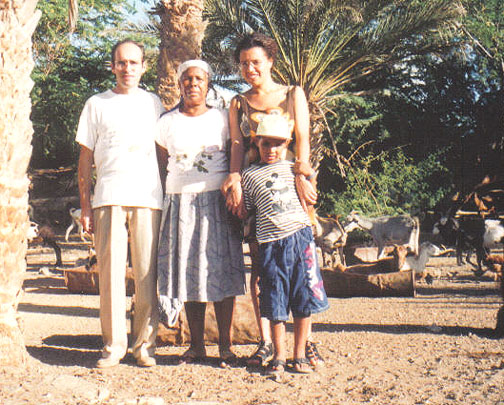 The photographer, Francisco, and his wife Helena standing aside of Nha Maria,
on her goat farm (Ribeira de Vinha, São Vicente Island).

Helena has her hands on her cousin Ricardo.