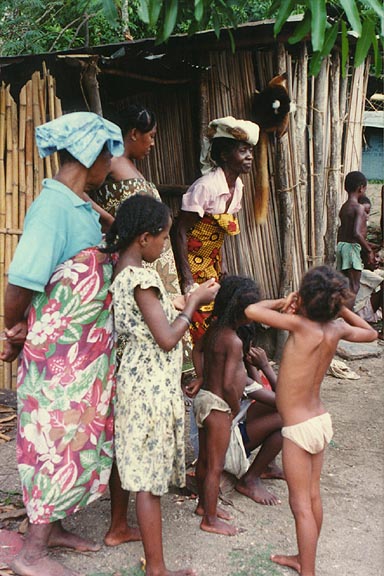 lemurs live close to the people

(Latin lemures, "nocturnal spirits"), common name for more than 40 species of primitive primates. Lemurs make up five closely related families within the primate order: the typical or true lemurs; the sportive lemurs; the dwarf lemurs and mouse lemurs; the indri, sifaka, and avahi; and the aye-aye. 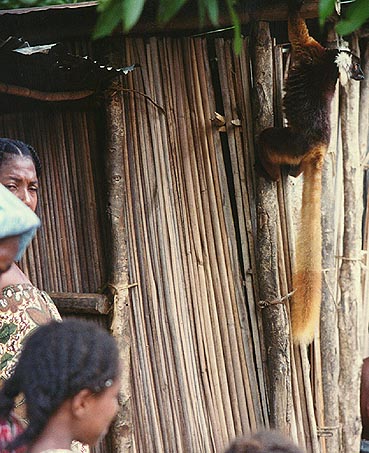 Lemurs are confined to the island of Madagascar off the east coast of Africa, and true lemurs were introduced to the nearby Comoros islands within the past few hundred years. Ongoing habitat loss endangers nearly all lemur species. 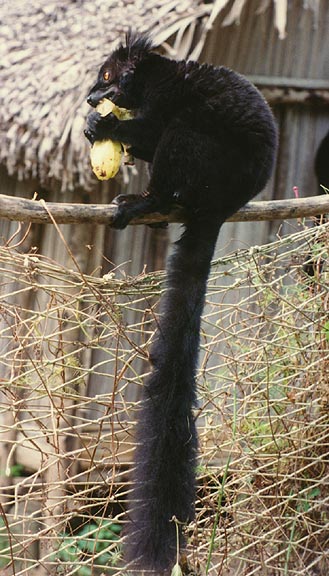 Lemurs resemble advanced primates chiefly in the structure of their hands and feet. The thumb of the hand and the great toe of the foot are well developed and opposable, which means that the tips of the thumb and great toe can touch the tips of the other fingers and toes in a way that is particularly useful for grasping tree branches and small objects. 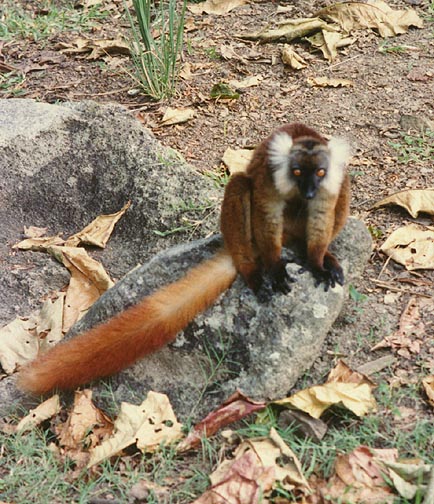 toes on the rock

The fingers and toes of lemurs end in nails, although the second toe of the hind foot of many species has a long claw, which the lemur uses to comb and clean its soft, luxurious fur. Most lemurs have sharp, pointed muzzles and large eyes. 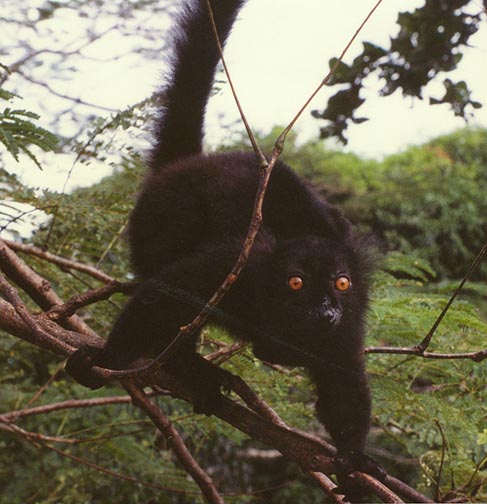 The eyes face forward and give lemurs stereoscopic vision, or depth perception. Except for the indri, all lemurs have long tails, but the tail is never prehensile—it cannot be wrapped around branches and used as an extra grip.

Lemurs are prosimians, a suborder of primates that also includes the galago, loris, and potto. Like all prosimians, they have a dental comb—their lower front teeth are fused and tilted forward, making a tool that is used to groom their fur. 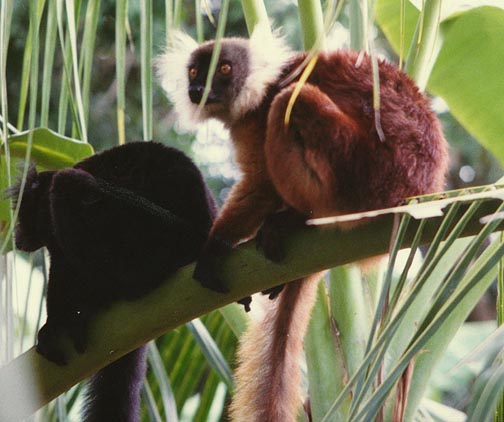 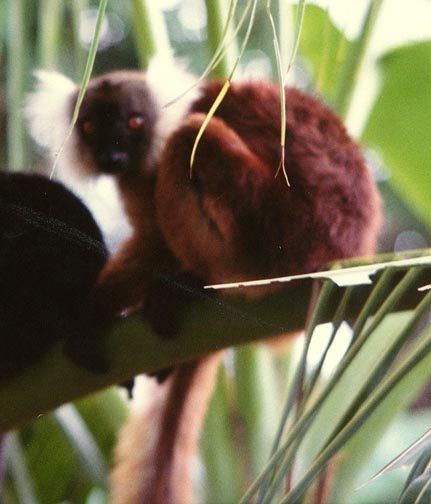 True lemurs and sportive lemurs are larger, about the size of cats. The aye-aye is slightly larger than the true lemur and has a long tail that is about one and a half times as long as its body. 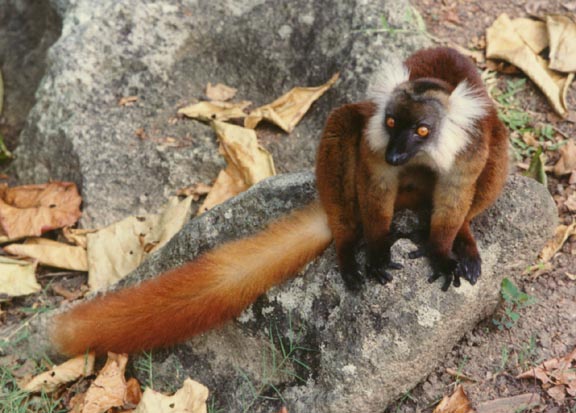 All lemurs feed primarily on flowers, leaves, and fruit. The true lemurs and the indri, sifaka, and avahi are strictly vegetarian. The dwarf and mouse lemurs supplement their diet with insects, small frogs, birds, lizards, and bird eggs, and the aye-aye eat insect larvae. Some species eat tree sap or gum, and some eat insect secretions. 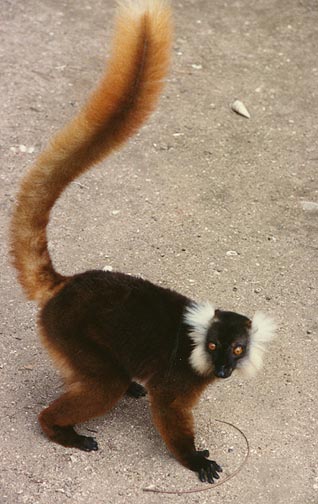 Some species, such as the gentle lemurs and the sportive lemurs, are able to eat leaves or bamboo, both of which are hard to digest. The sportive lemurs pass the food through their stomachs several times, eating their feces in order to extract the available nutrients. 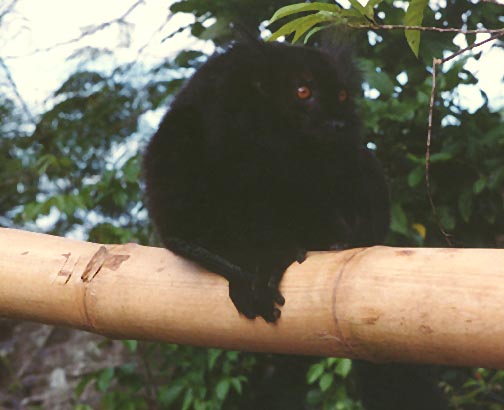 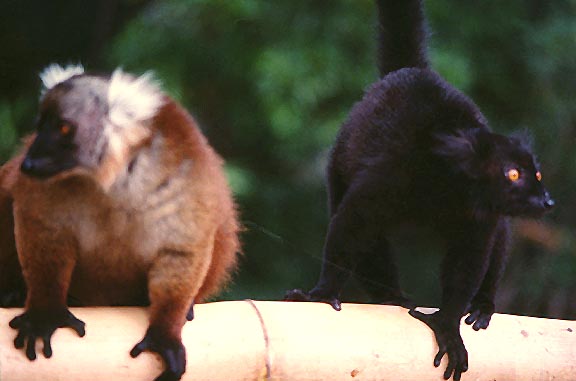 Like the rest of the primates, lemurs display a wide variety of social structures. Most lemurs are social, living in small groups, although the aye-aye lives alone. Some lemurs live in family groups of a mated pair and their young, but other species live in matriarchal groups in which the females dominate the males. 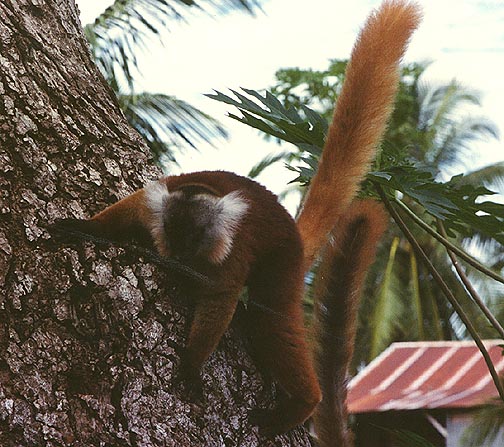 Females stay in the group they were born into, while males transfer from group to group. In some species that live in groups, the group members disperse each day to feed alone, while in other species, the group stays together while feeding. 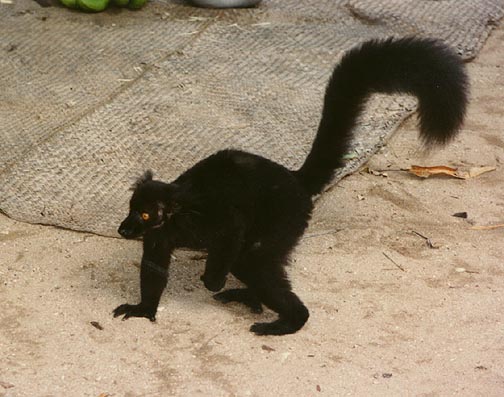 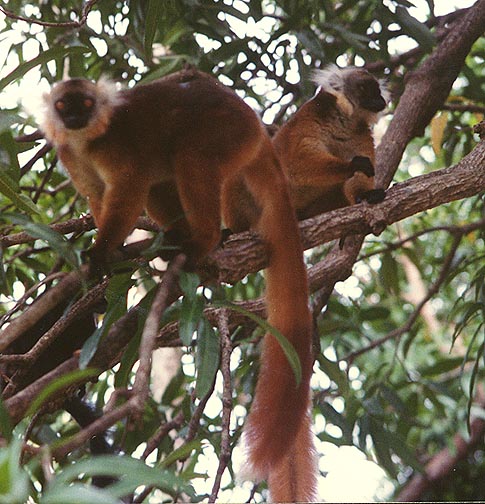 Lemurs probably first arrived on the island of Madagascar about fifty million years ago, when the island was closer to Africa. Madagascar was an ideal home for these early lemurs because it lacked many of the large predators that hunted lemur-like animals in Africa. With fewer predators and less competition, lemurs quickly spread throughout the island and diversified into a rich array of species. 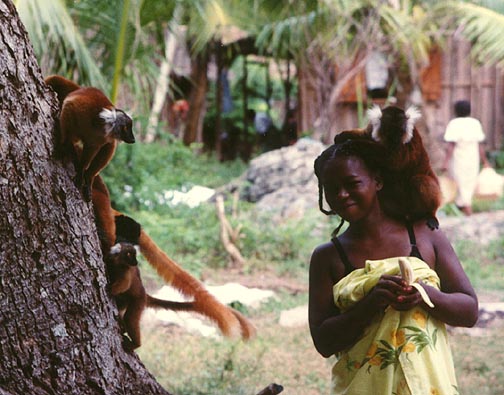 The first humans arrived between 1500 and 2000 years ago and quickly hunted at least 14 of the larger species of lemurs to extinction. Currently, the forests of Madagascar are rapidly being cut down, and as a result 12 species of lemur are endangered and another 20 species are listed as being vulnerable to extinction by the World Conservation Monitoring Centre. 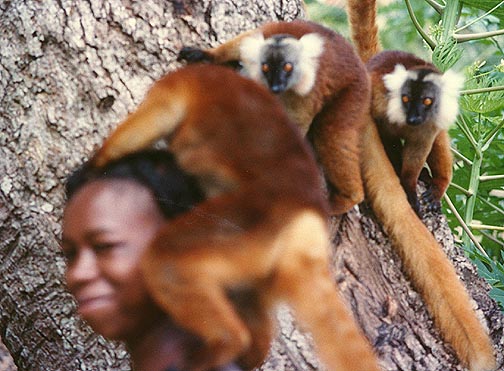 on the head of a woman 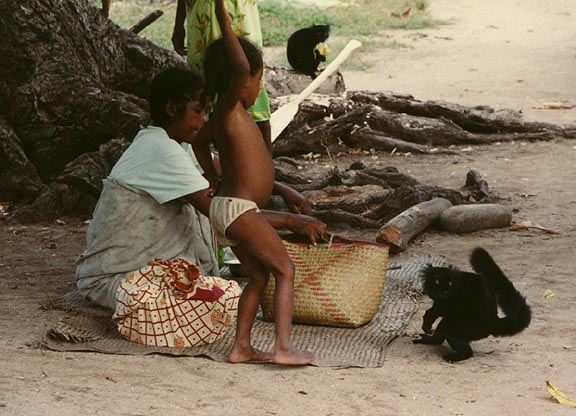