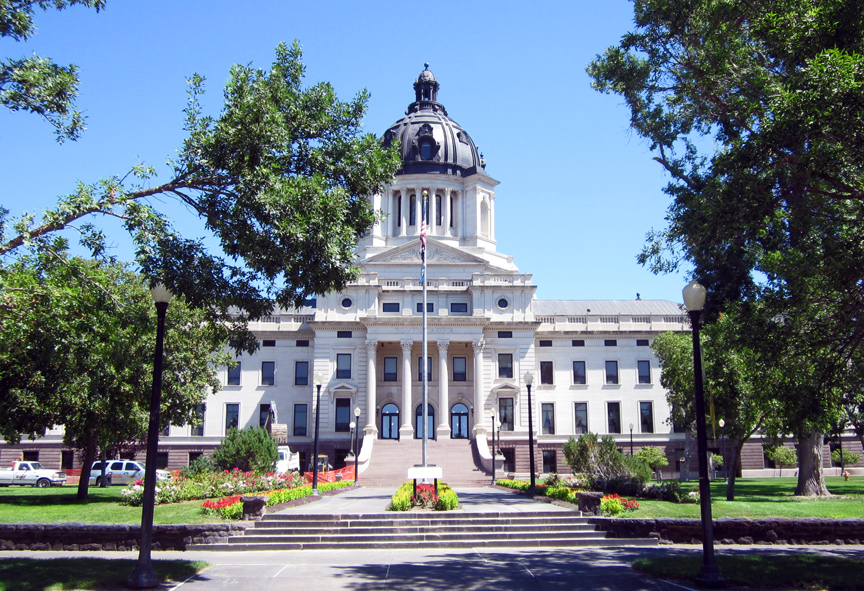 Pierre is the capital of the state of South Dakota and the county seat of Hughes County. The population was 13,646 at the 2010 census, making it the second least populous state capital after Montpelier, Vermont. Founded in 1880 on the Missouri River opposite Fort Pierre, Pierre has been the capital since South Dakota gained statehood on November 2, 1889, having been chosen for its location in the geographic center of the state. Fort Pierre itself was named after Pierre Chouteau, Jr., an American fur trader of French origin. 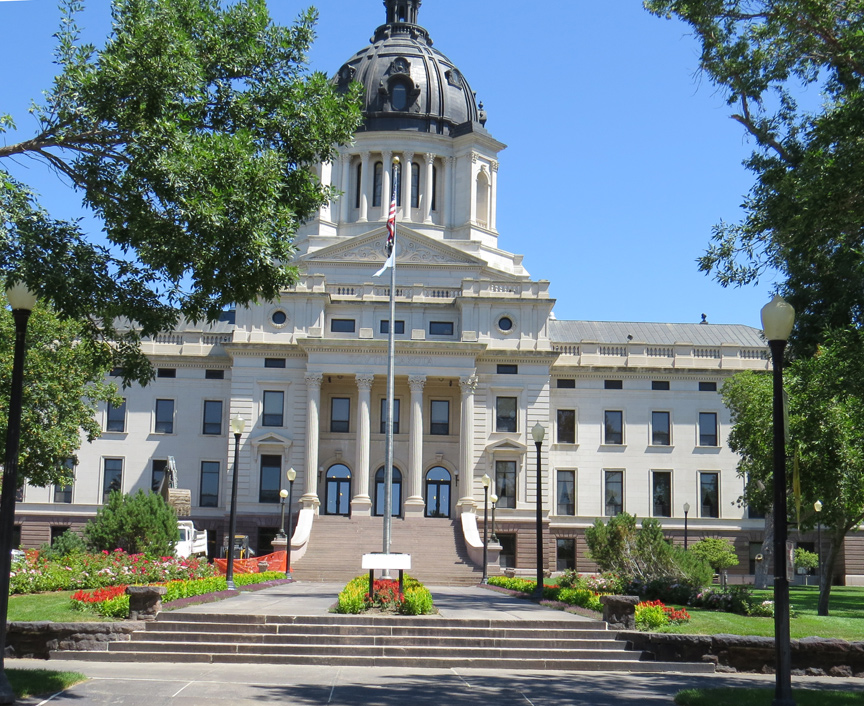 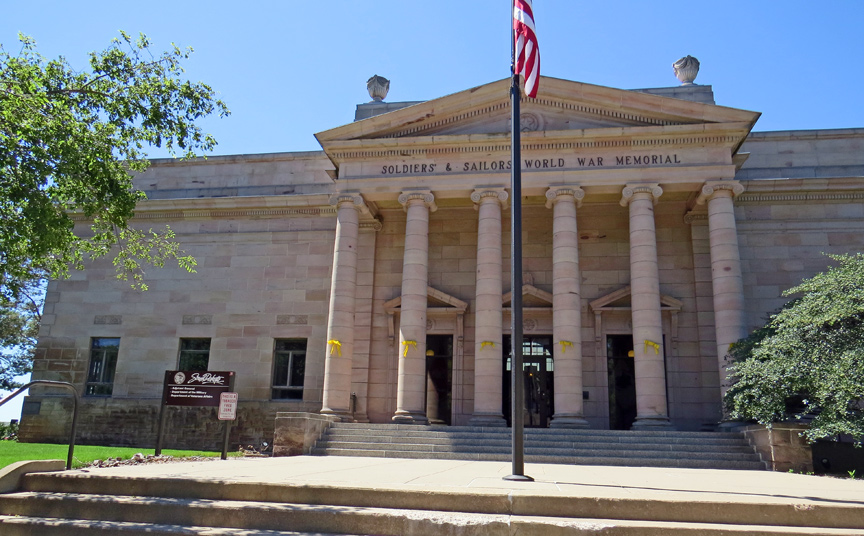 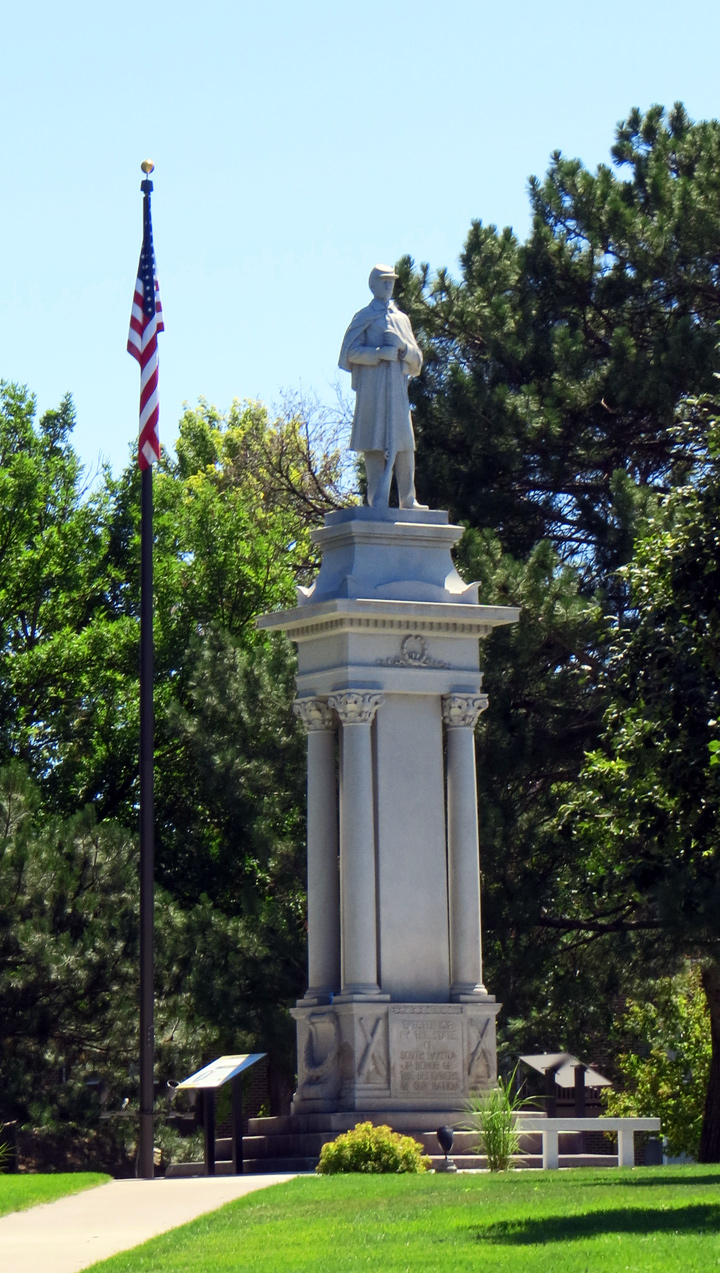 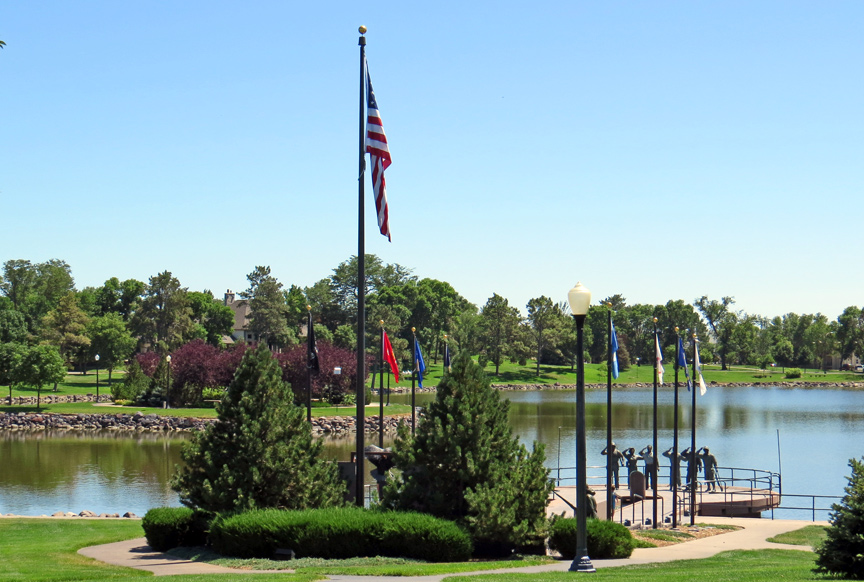 The Governor of South Dakota heads the executive branch of the state government. The current governor is Dennis Daugaard, a Republican from Garretson. The state constitution gives the governor the power to either sign into law or veto bills passed by the state legislature, to serve as commander-in-chief of the state's armed forces, to appoint a cabinet, and to commute criminal sentences or to pardon those convicted of crimes. The governor serves for a four-year term, and may not serve more than two consecutive terms. 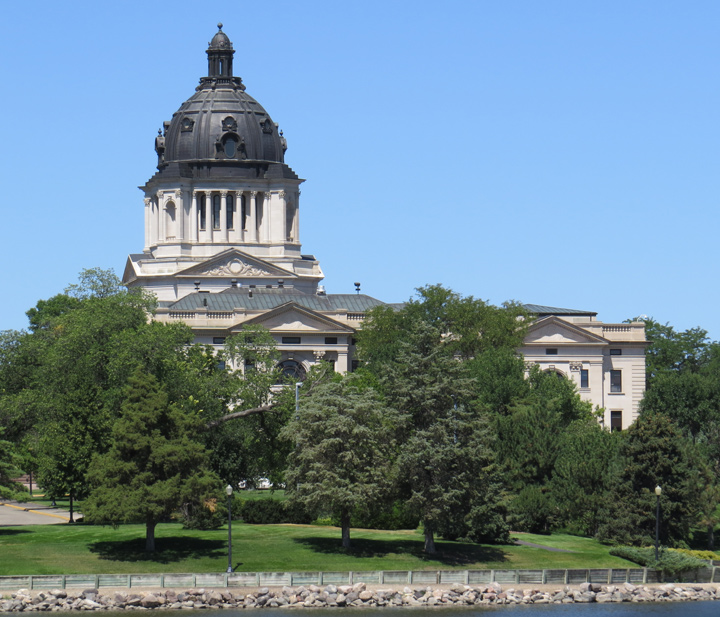 The state legislature is made up of two bodies, the Senate, which has 35 members, and the House of Representatives, with 70 members. South Dakota is divided into 35 legislative districts, with voters electing two representatives and one senator per district. The legislature meets for an annual session which begins on the second Tuesday in January and lasts for 40 days. it also meets if a special session is called by the governor. The Republican Party currently holds majorities in both houses of the South Dakota Legislature. Currently, the Senate consists of 27 Republicans and 8 Democrats, while the House of Representatives is made up of 58 Republicans, 13 Democrats  State law currently limits legislators to a maximum of four consecutive terms in the same house of the Legislature. 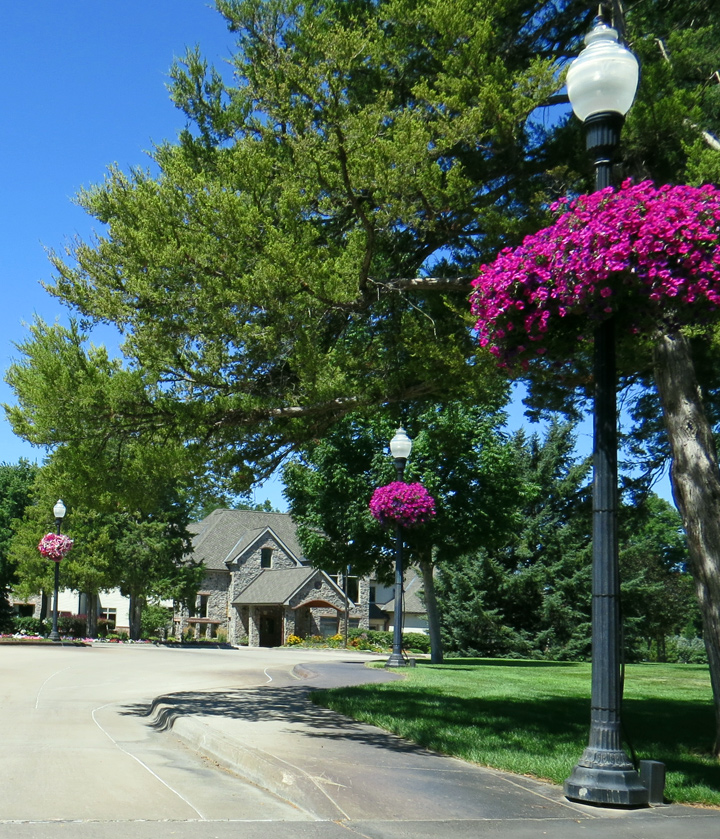 The judicial branch is made up of several levels. The state supreme court, with four justices and a chief justice, is the highest court in the state. Below the supreme court are the circuit courts; 38 circuit judges serve in seven judicial circuits in the state. Below the circuit courts are the magistrate courts, which deal with more minor criminal and civil actions. 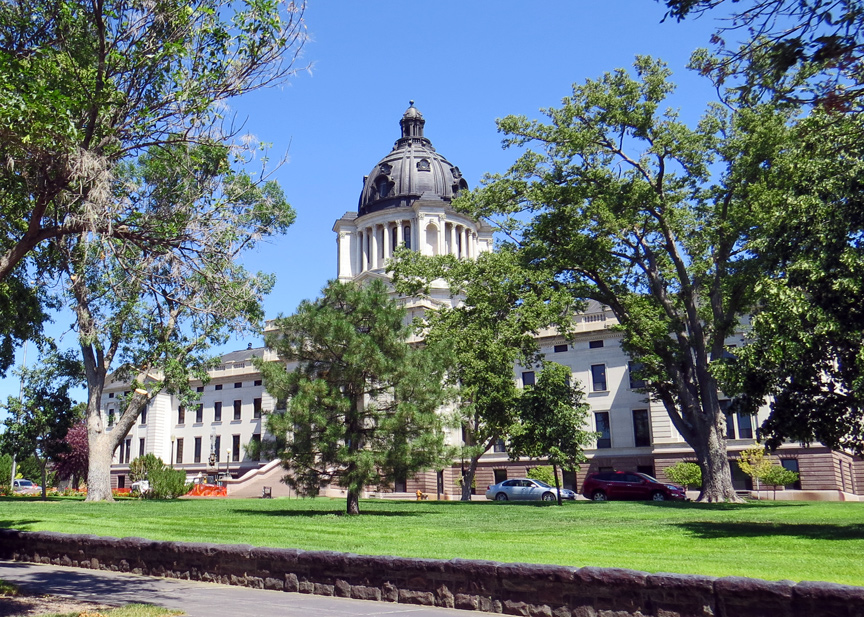 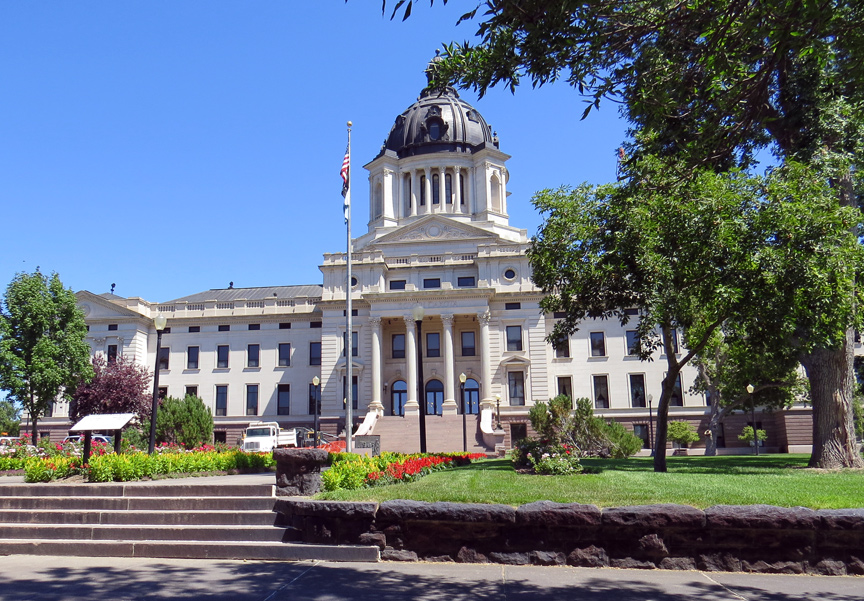 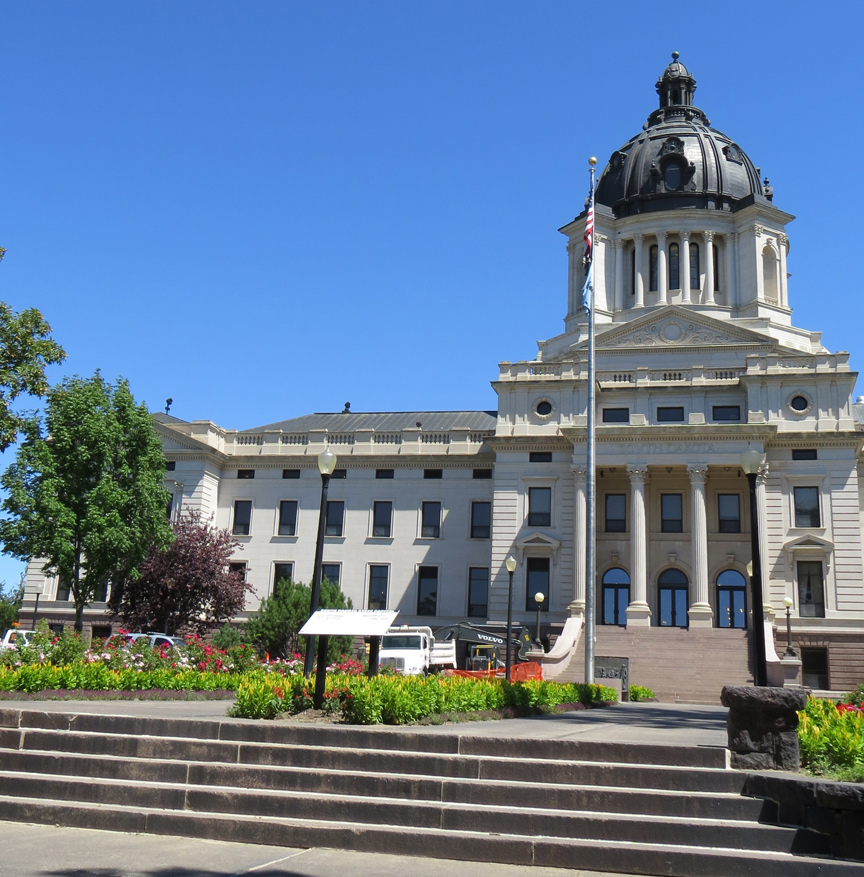 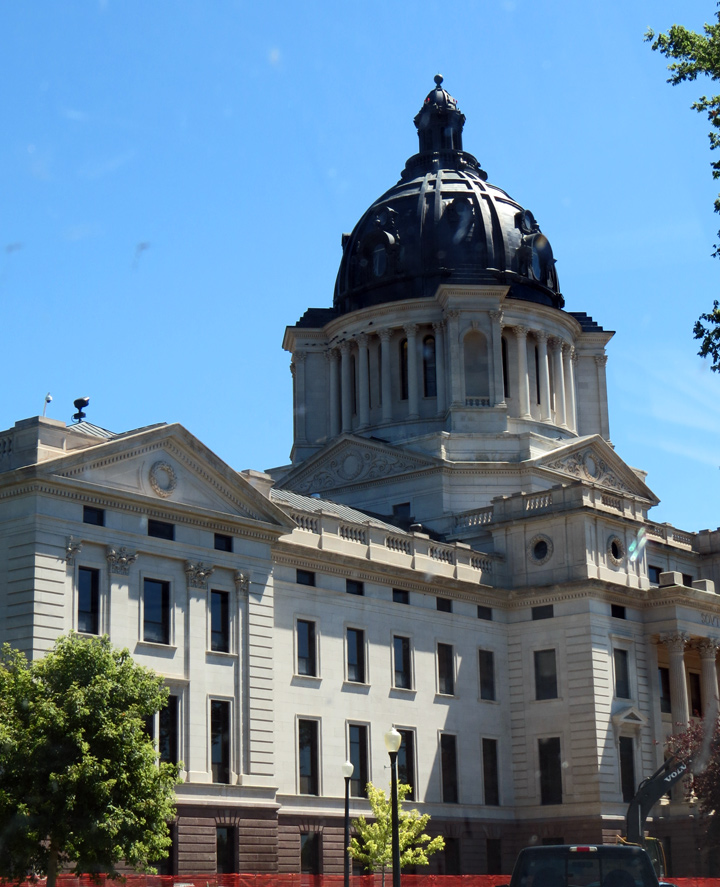 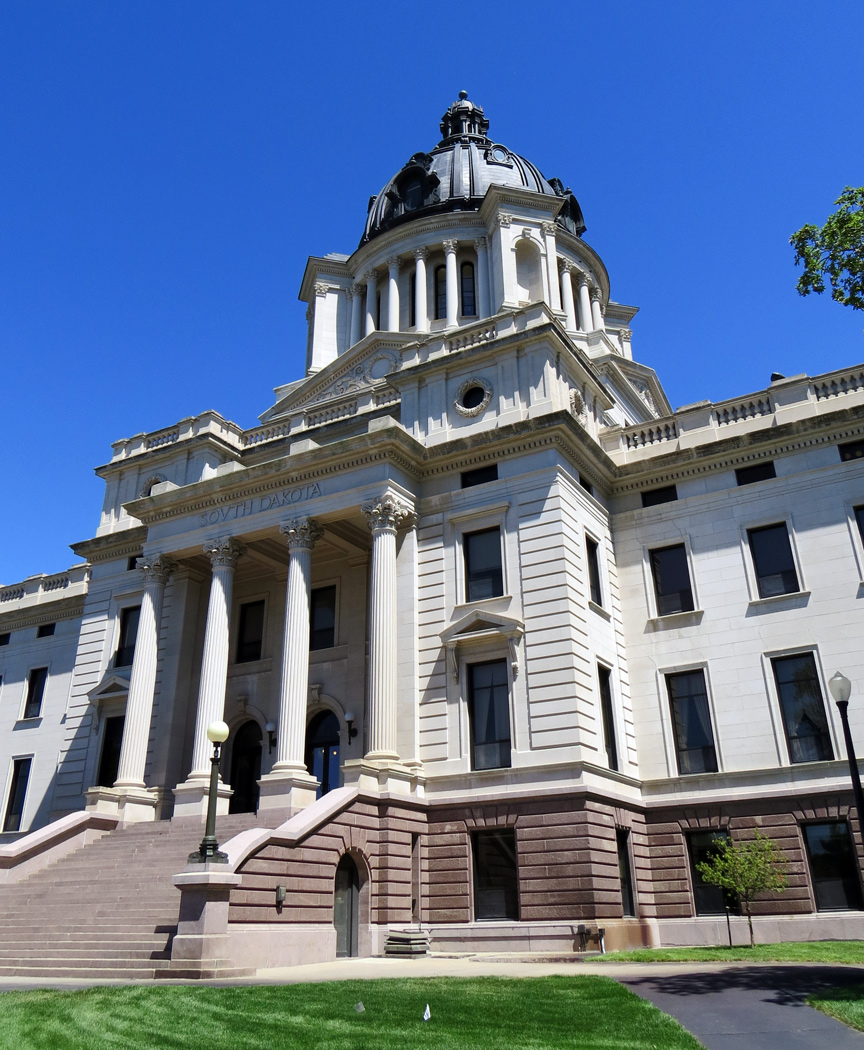 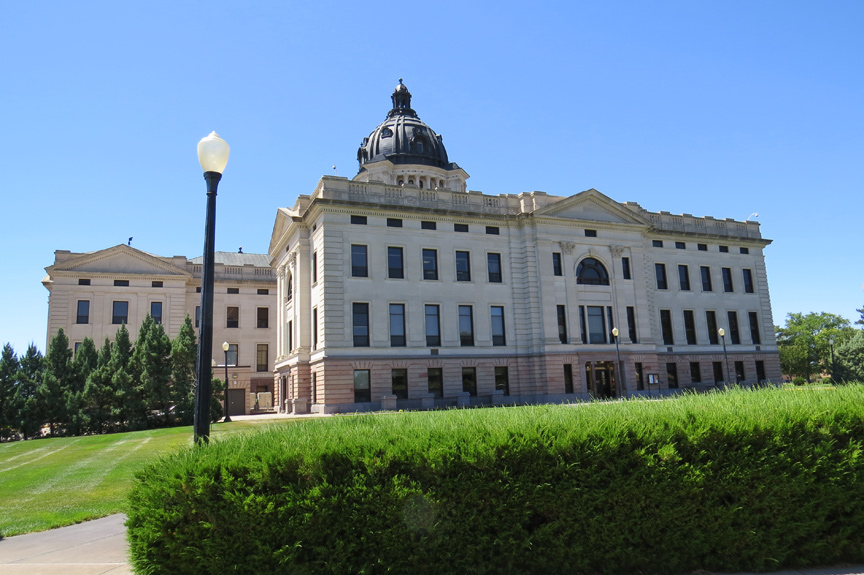 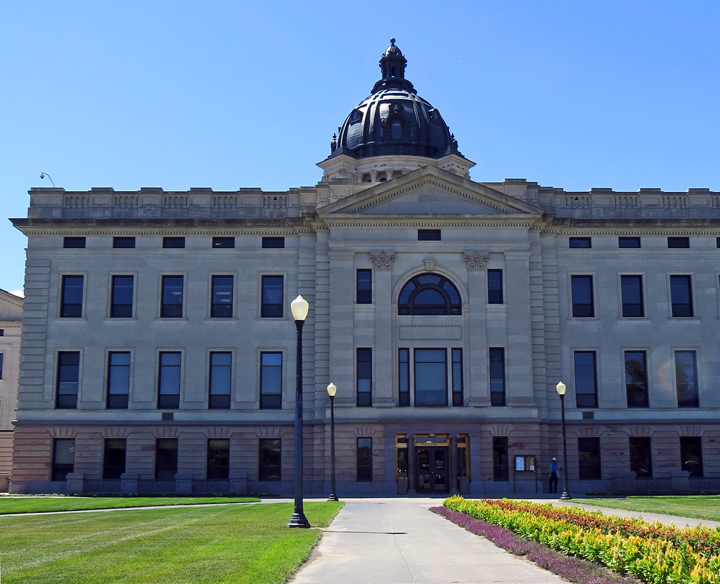 In US presidential elections, South Dakota receives three votes in the electoral college, out of a total of 538. Like most states, South Dakota's electoral votes are granted in a winner-take-all system. 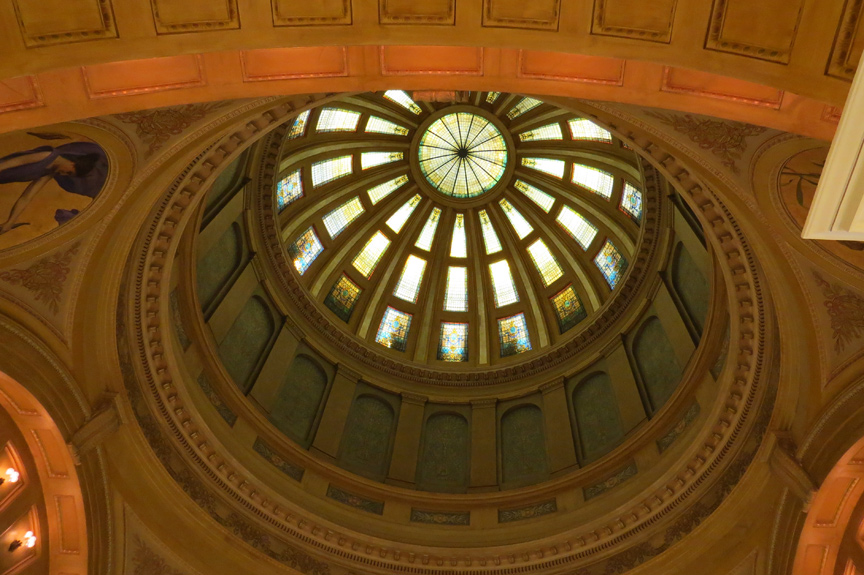 More Photos of the Rotunda

South Dakota politics are generally dominated by the Republican Party, and the state has not supported a Democratic presidential candidate since 1964 — especially notable when one considers that George McGovern, the Democratic nominee in 1972, was from South Dakota. In 2004, George W. Bush won the state's three electoral votes with 59.9% of the vote. 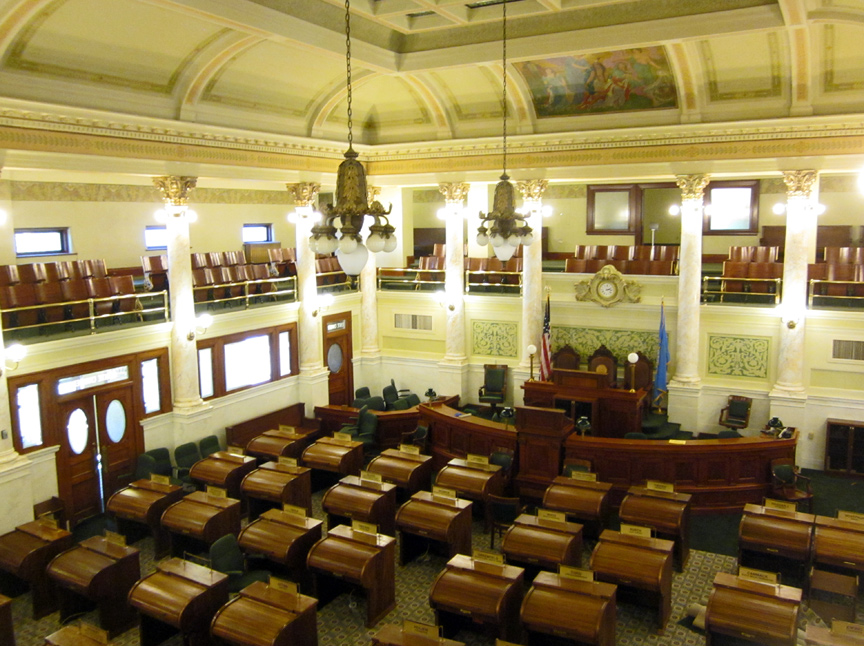 More Photos of the legislative Chambers

There are only five reliably Democratic counties in the state — most of them with primarily American Indian populations. Republicans have won the last seven gubernatorial elections and have controlled the legislature, with one brief interruption, for over thirty years. Democrats, however, have been successful in winning election to Congress from South Dakota, including former Senators Tom Daschle, James Abourezk and George McGovern; current Senator Tim Johnson; and former Representative Stephanie Herseth Sandlin. 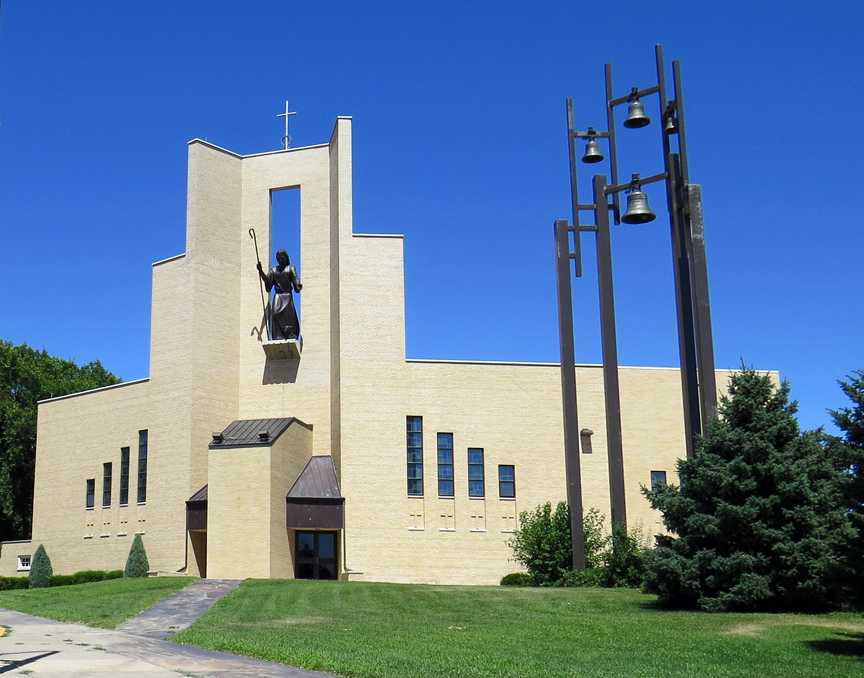 While President Bush received a lower vote percentage in 2004 than he did in 2000, he still received a very strong 60% of the popular vote. Part of the deviation had to do with record turnout driven by the intense Senate campaigns that year. Republicans hold a 10% registration advantage over Democrats and hold large majorities in both the state House of Representatives and Senate. Additionally, all but one of the statewide elected officers are Republicans. 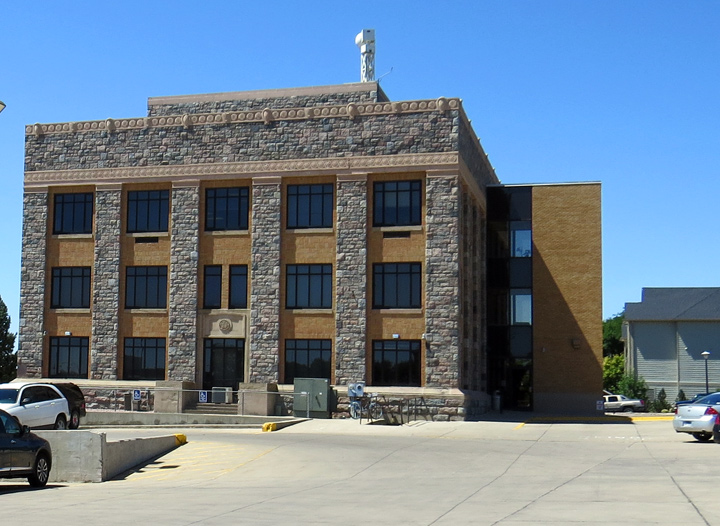 In the more than a quarter century between 1979 and 2005, two politicians, one a Republican and one a Democrat, dominated South Dakota politics. Republican Governor Bill Janklow served four terms as governor 1979-1987 and then from 1995 to 2003 followed by a brief partial term as a United States Representative 2003-2004. Janklow's career was ended by a motor vehicle manslaughter conviction causing his resignation from Congress. Democrat Tom Daschle was also a dominant figure in South Dakota politics, serving in Congress, 1979-2005. He first served eight years in the United States House of Representatives and then eighteen years in the United States Senate after his senate election in 1986. Over a period of ten years, he served both as minority leader and majority leader in the Senate. In 2004, he lost his Senate seat to a Republican, former United States Representative John Thune, who narrowly defeated Daschle by a 51%-49% margin. Daschle became the first Senate party leader in 52 years to lose re-election to his own Senate seat.

South Dakota has a history of voting out powerful members of the Senate who seek fourth terms. Former Commerce Committee Chairmam Larry Pressler lost to Congressman Tim Johnson in 1996, and 1972 Democratic Presidential nominee George McGovern was defeated by Congressman James Abdnor in 1980. Abdnor was, in turn, defeated by Daschle in 1986 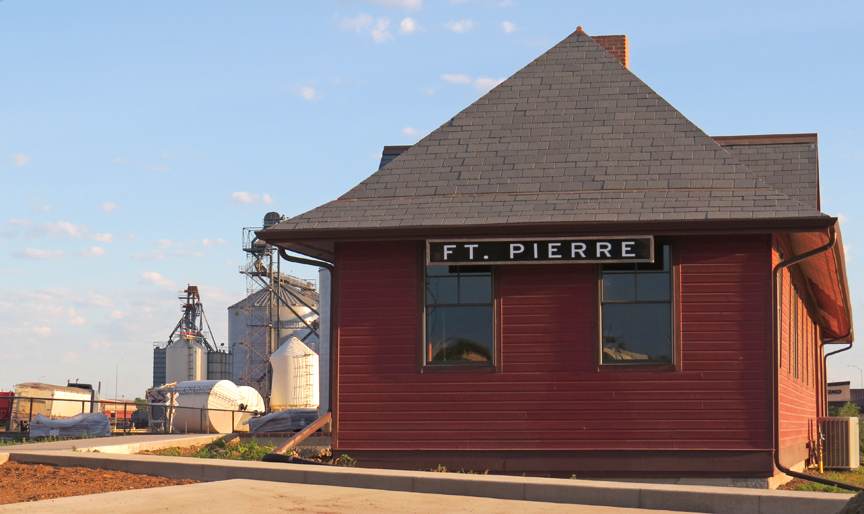 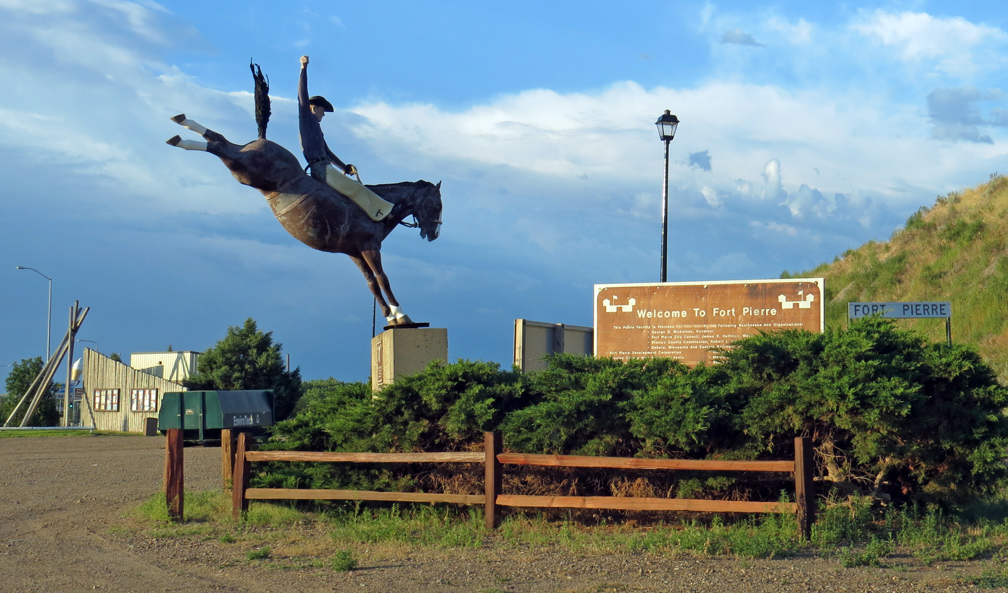 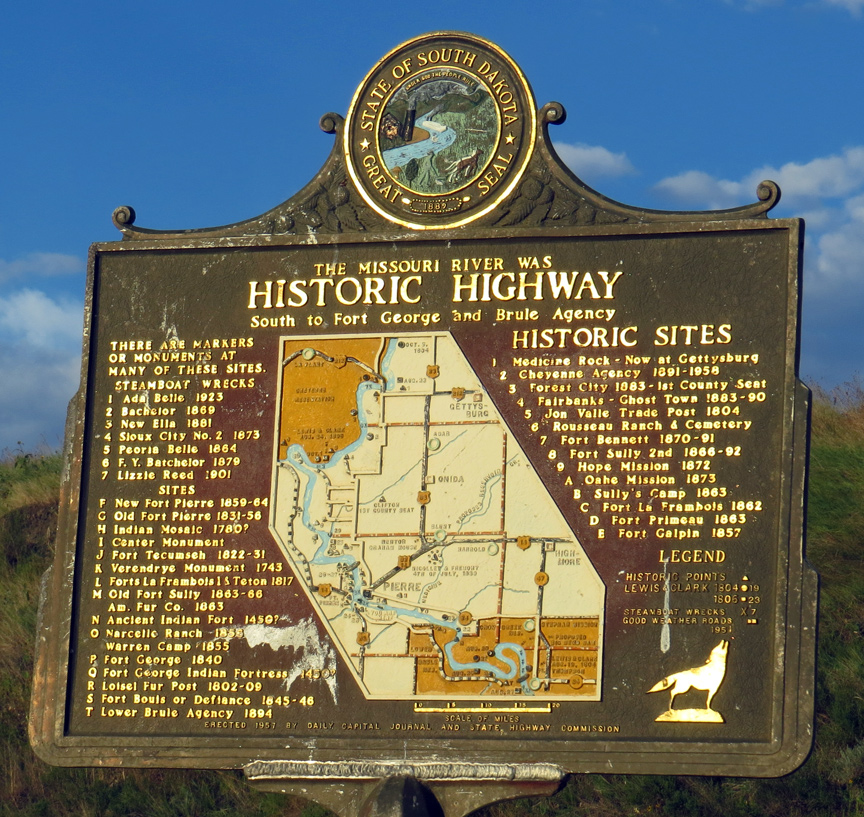