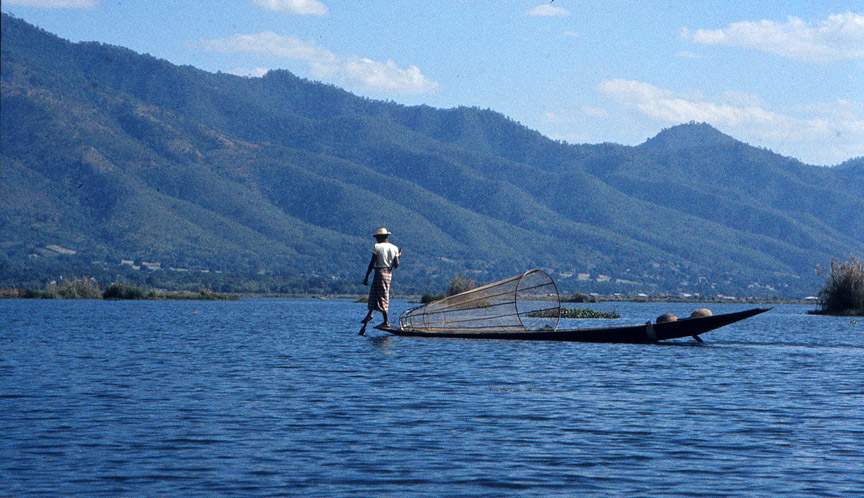 Inle Lake
rowing with his legs in a standing position

Inle Lake is a freshwater lake located in the mountains of Shan State in Myanmar (Burma). It is the second largest lake in Myanmar with an estimated surface area of 44.9 sq miles, and one of the highest at an altitude of 2900 feet. During the dry season, the average water depth is 7 feet, with the deepest point being 12 feet, but during the rainy season this can increase by 5 feet. 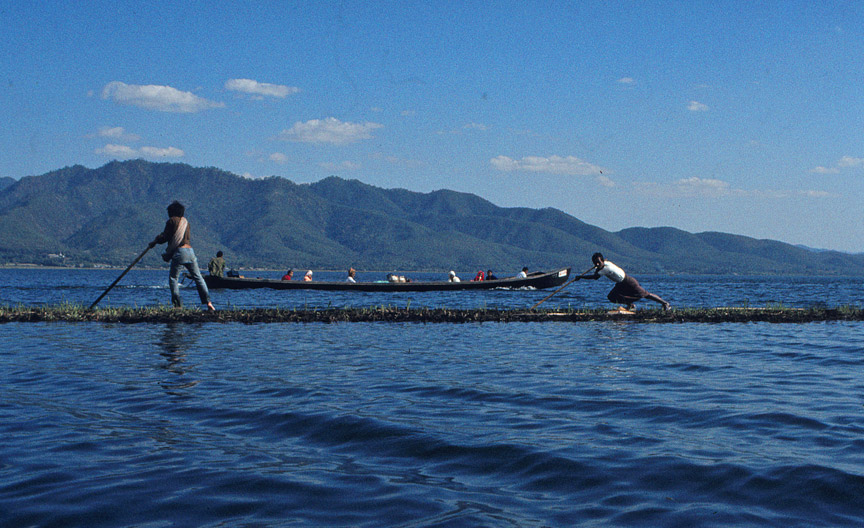 The watershed area for the lake lies to a large extent to the north and west of the lake. The lake drains through the Nam Pilu or Balu Chaung on its southern end. There is a hot spring on its northwestern shore. 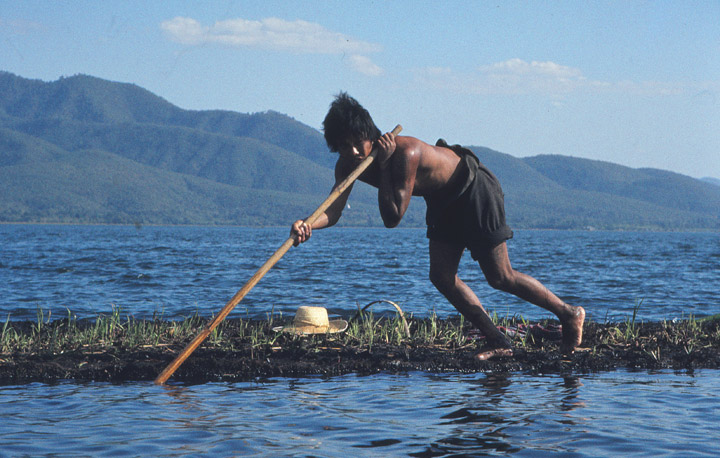 moving a floating sod strip with his pole

Although not a large lake, there is a number of endemic species. Over twenty species of snails and nine species of fish are found nowhere else in the world. Some of these, like the silver-blue scaleless Sawbwa barb (Sawbwa resplendens), the Crossbanded dwarf danio (Microrasbora erythromicron), and Inle danio (Inlecypris auropurpurea), are of minor commercial importance for the aquarium trade 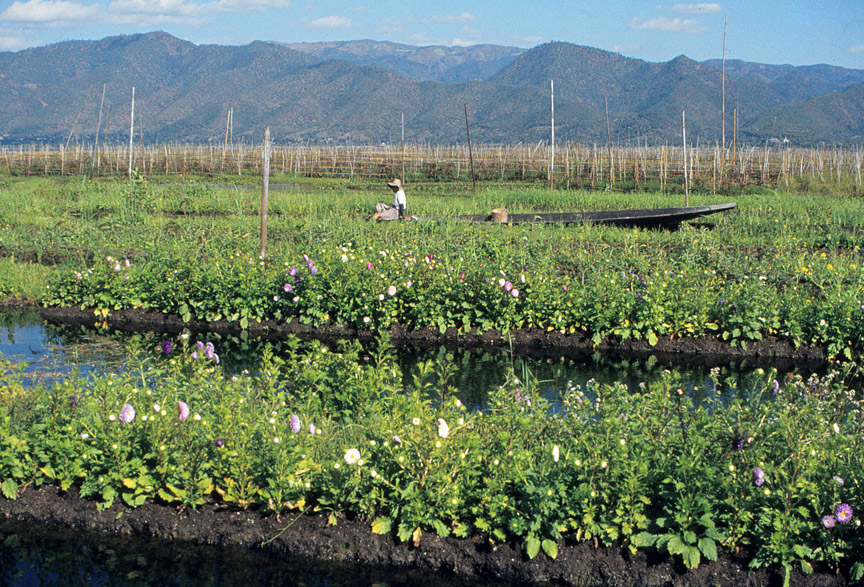 The people of Inle Lake (called Intha), some 70,000 of them, live in four cities bordering the lake, in numerous small villages along the lake's shores, and on the lake itself. The entire lake area is in Nyaung Shwe township. The population consists predominantly of Intha, with a mix of other Shan, Taungyo, Pa-O (Taungthu), Danu, Kayah, Danaw and Bamar ethnicities. Most are devout Buddhists, and live in simple houses of wood and woven bamboo on stilts; they are largely self-sufficient farmers. 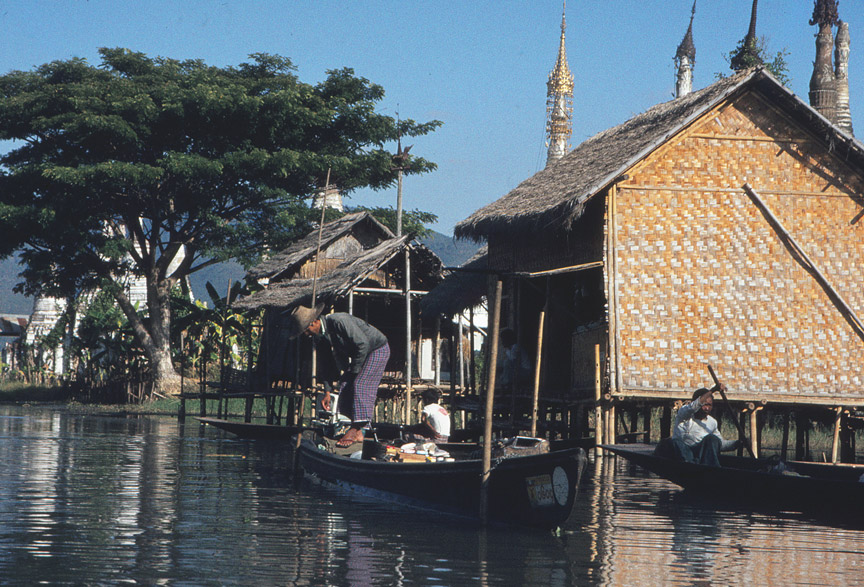 Most transportation on the lake is traditionally by small boats, or by somewhat larger boats fitted with outboard motors. Local fishermen are known for practicing a distinctive rowing style which involves standing at the stern on one leg and wrapping the other leg around the oar. This unique style evolved for the reason that the lake is covered by reeds and floating plants making it difficult to see above them while sitting. Standing provides the rower with a view beyond the reeds. However, the leg rowing style is only practiced by the men. Women row in the customary style, using the oar with their hands, sitting cross legged at the stern. 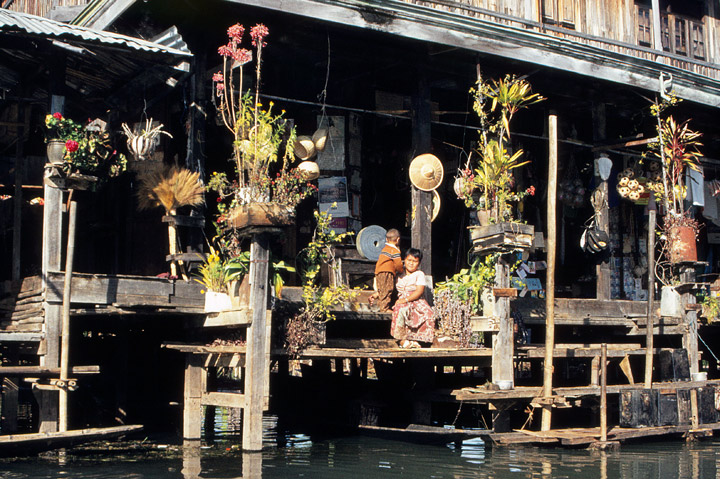 Fish caught from the lake - the most abundant kind is called nga hpein (Inle Carp, Cyprinus intha) - are a staple of the local diet. A popular local dish is htamin gyin - 'fermented' rice kneaded with fish and/or potato - served with hnapyan gyaw (literally twice fried - Shan tofu). In addition to fishing, locals grow vegetables and fruit in large gardens that float on the surface of the lake. The floating garden beds are formed by extensive manual labor. The farmers gather up lake-bottom weeds from the deeper parts of the lake, bring them back in boats and make them into floating beds in their garden areas, anchored by bamboo poles. These gardens rise and fall with changes in the water level, and so are resistant to flooding. The constant availability of nutrient-laden water results in these gardens being incredibly fertile. Rice cultivation is also significant. 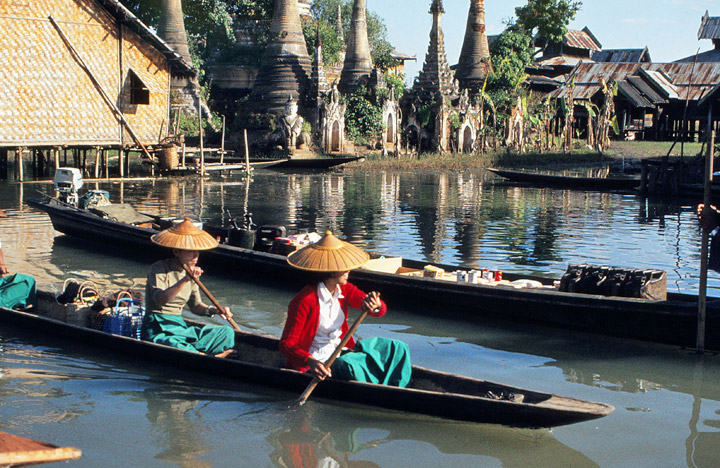 Hand-made goods for local use and trading are another source of commerce. Typical products include tools, carvings and other ornamental objects, textiles, and cheroots. A local market serves most common shopping needs and is held daily but the location of the event rotates through five different sites around the lake area, thus each of them hosting an itinerant market every fifth day. When held on the lake itself, trading is conducted from small boats. This 'floating-market' event tends to emphasize tourist trade much more than the other four. 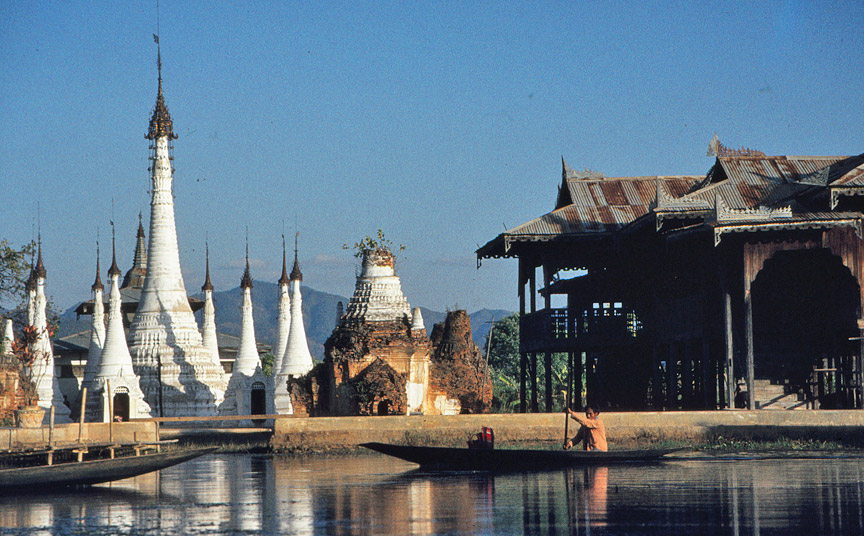 The Inle lake area is renowned for its weaving industry. The Shan-bags, used daily by many Burmese as a tote-bag, are produced in large quantities here. Silk-weaving is another very important industry, producing high-quality hand-woven silk fabrics of distinctive design called Inle longyi. A unique fabric from the lotus plant fibers is produced only at Inle lake and is used for weaving special robes for Buddha images called kya thingahn (lotus robe).