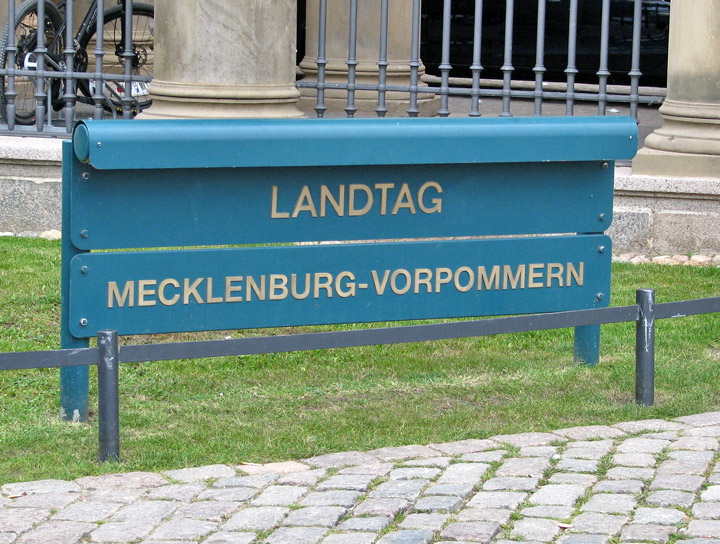 Schwerin Castle (German: Schweriner Schloss) is a castle located in the city of Schwerin, the capital of the Bundesland of Mecklenburg-Vorpommern, Germany. For centuries it was the home of the dukes and grand dukes of Mecklenburg and later Mecklenburg-Schwerin. It currently serves as the seat of the state parliament. 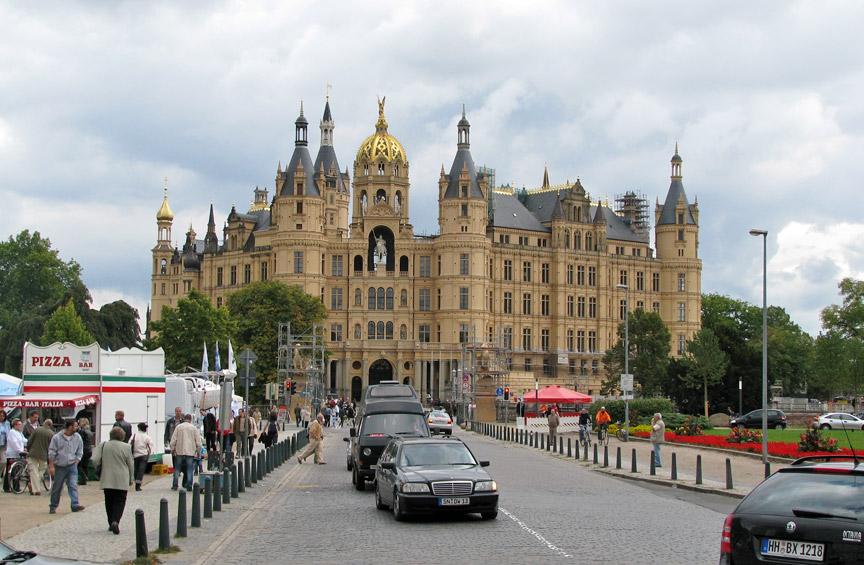 First reports of a castle on the location were made by the Sephardic merchant Ibrahim ibn Jacub in 973, who travelled through the Slavic areas of Europe. There was a fort of the Polabian Slav tribe of the Obotrites on an island in the large Lake of Schwerin. 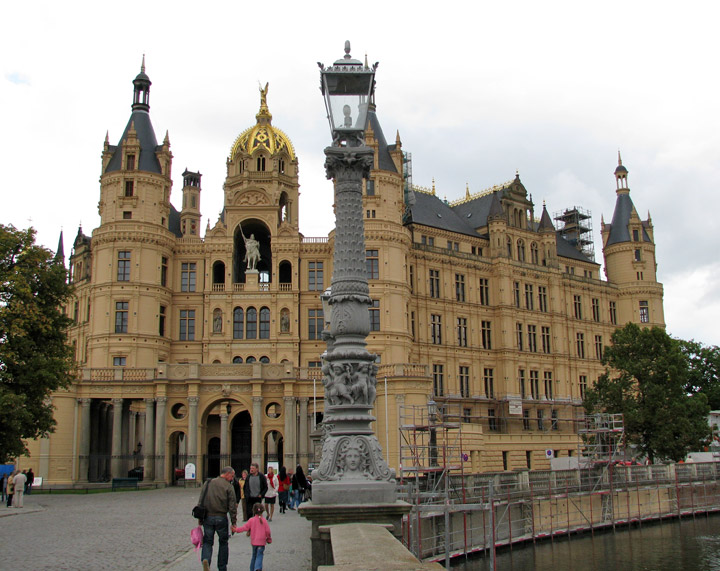 In 1160, the fort became a target of Germanic noblemen planning to expand their territory eastward under the leadership of Henry the Lion (1129-1195). The Obotrites under Niklot destroyed the fort but left because of the Germanic military dominance. 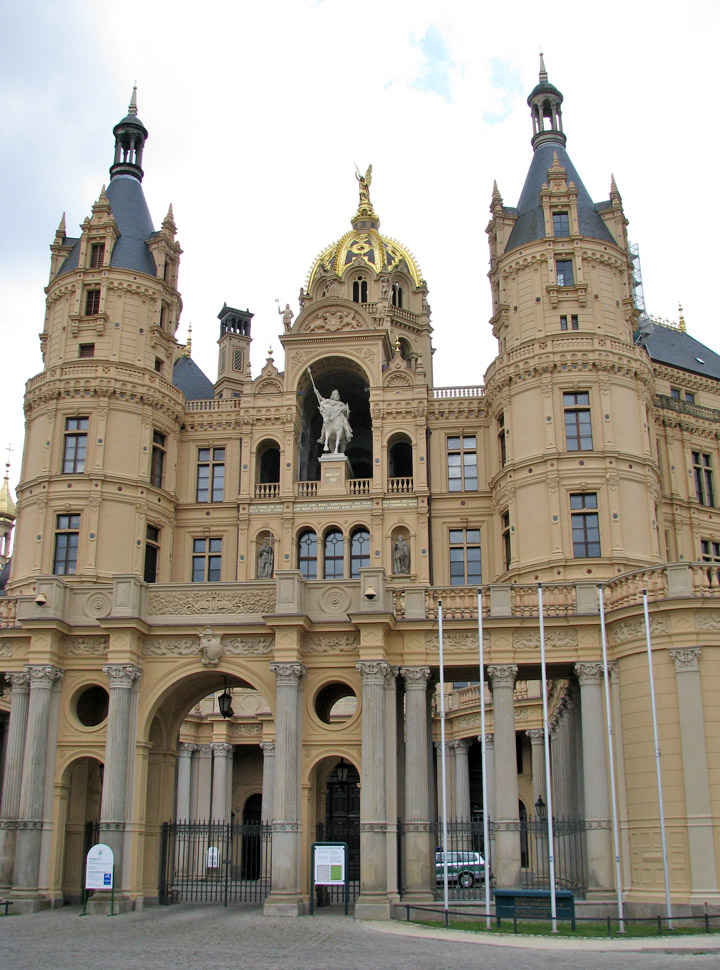 However, the German conquerors recognized the strategic and aesthetically interesting location of the island and started building a new fort. The foundation of the city of Schwerin took place in the same year. Schwerin became seat of a bishopric. 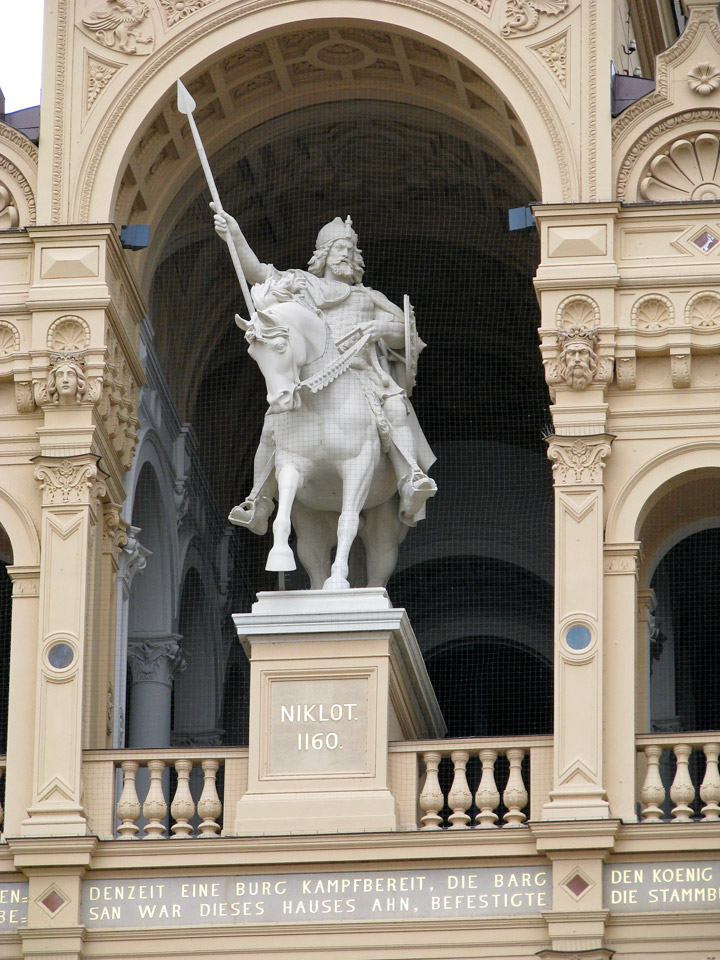 In 1167, Henry gave the County of Schwerin to his vassal Gunzelin von Hagen, and the rest of the country around the city was returned to Niklot's son Pribislav, forming a ducal hereditary line that lasted until 1918. 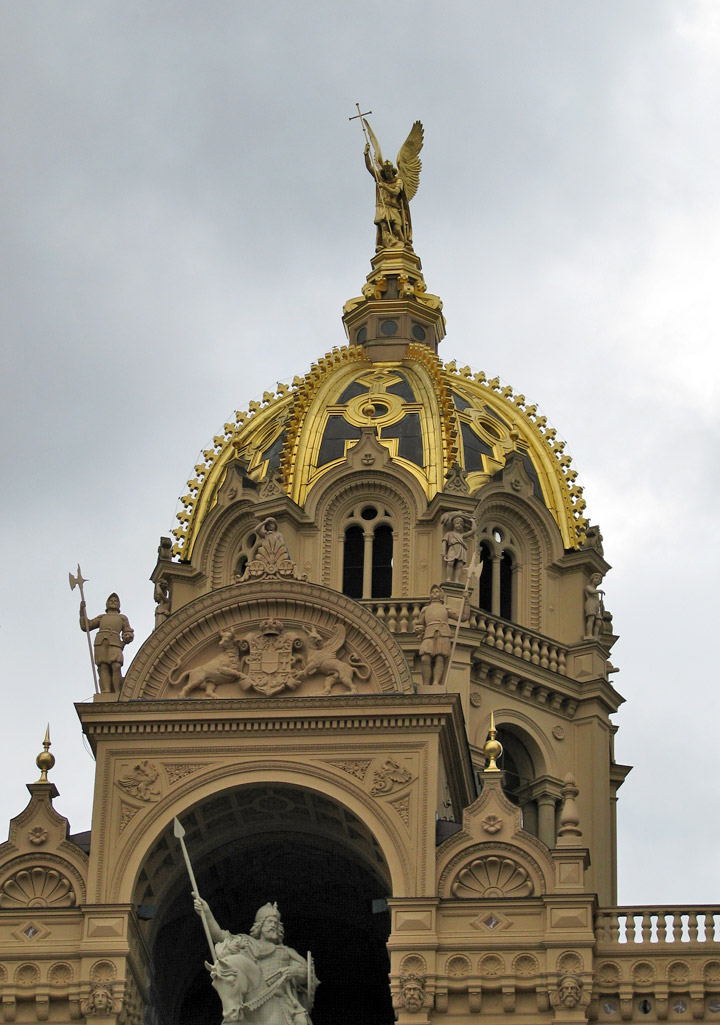 In 1358, the County of Schwerin was bought by the descendants of Niklot, who had been elevated to Dukes of Mecklenburg in 1348. Soon, they relocated farther inland from Mikelenburg, near the city of Wismar, to Schwerin. During the late Gothic era, the growing prosperity and position of the dukes lead to a growing need for a representative castle, and this meant architectural changes to the fortress settlement. The Bishop's House (German Bischofshaus) from that period remains intact. 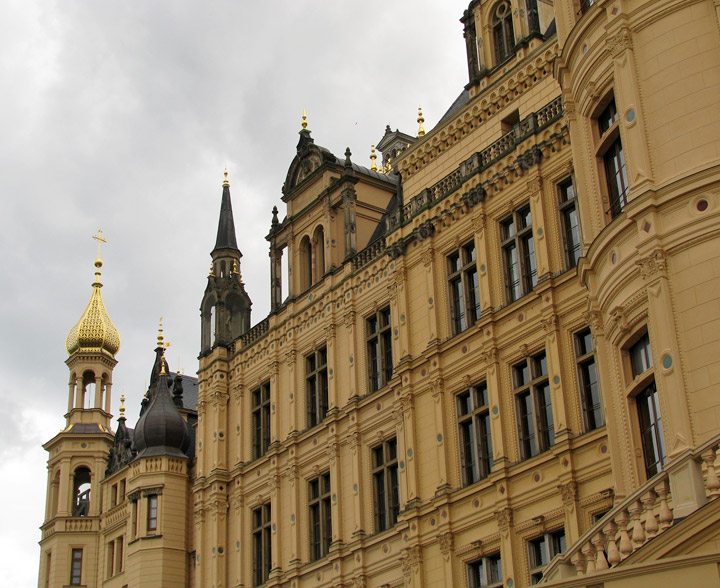 Under Duke Johann Albrecht I. (1525-1576), the castle saw some important changes. The fort became a castle, and the defensive functionality of the fortress was replaced with ornamentation and concessions to comfort. The use of terracotta during the Renaissance was dominant in North German architecture, and Schwerin's terracotta was supplied from Lübeck. 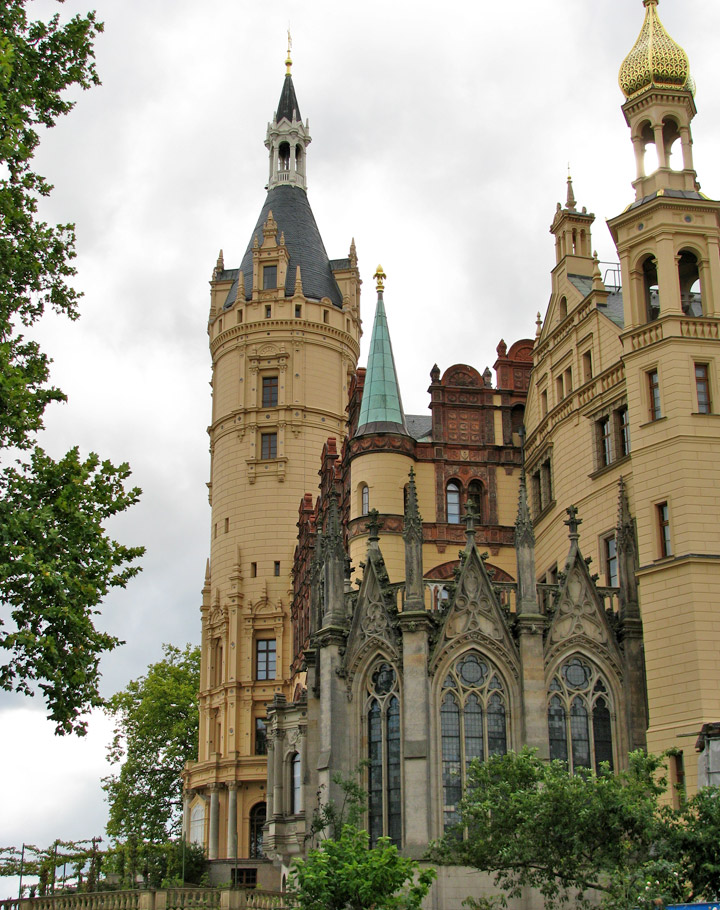 A few years after reworking the castle itself, from 1560 to 1563, Johann Albrecht rebuilt the castle's chapel. It became the first new Protestant church of the state. The architecture was inspired by churches in Torgau and Dresden. The Venetian Renaissance gate, its gable showing the carrying of the cross, was made by Hans Walther (1526-1600), a sculptor from Dresden. Windows on the northern face show biblical illustrations by well-known Dutch artist Willem van den Broecke (called "Paludanus") (1530-1580).

As the castle needed additional defenses, despite its island site, some time in the middle of the 16th century bastions were established to the north-west, south-west and south-east. They were probably built by the same Italian architects who, under Francesco a Bornau, also worked in Dömitz. The bastions were later modified several times, but they are still standing today. 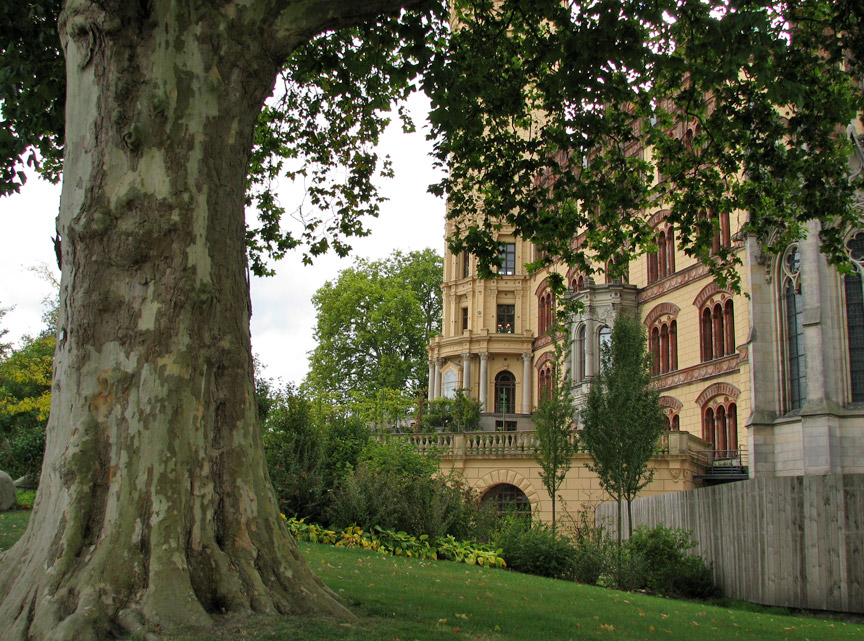 next to the old sycamore tree

Before the Thirty Years' War, the architect Ghert Evert Piloot, who had entered Mecklenburg's service in 1612, made plans to completely rebuild the castle in the style of the Dutch Renaissance. In 1617, work began under his supervision, but soon had to cease due to the war. Piloot's plans were later partially put into practice between 1635 and 1643: the house above the castle kitchen and that above the chapel were razed and given Dutch Renaissance style façades. 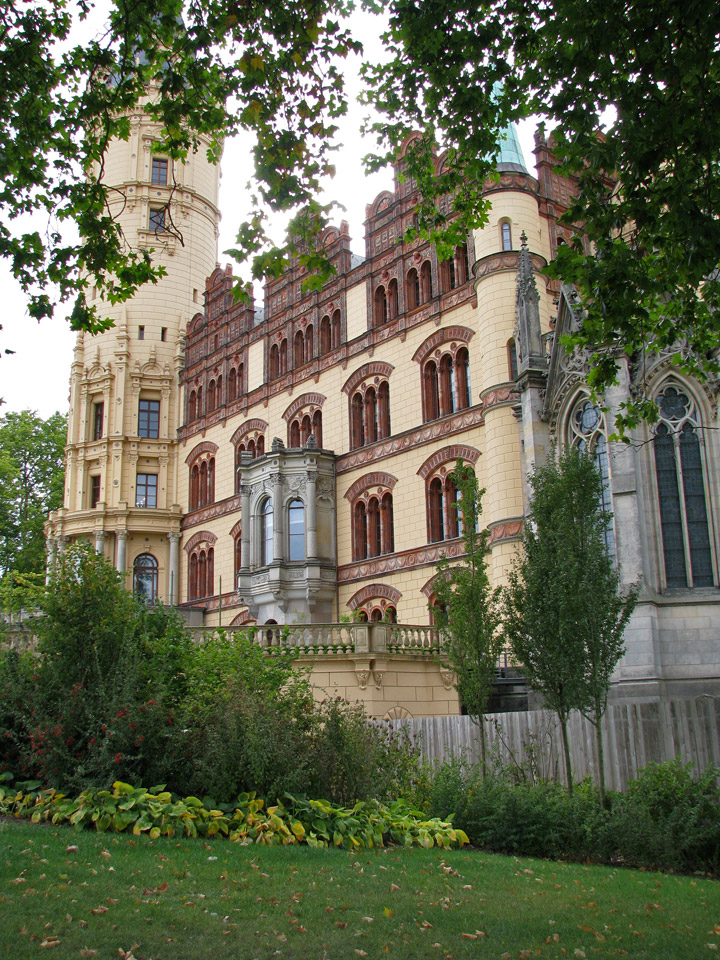 During this period, a half-timbered building was constructed near the chapel to house the archducal collection of paintings. Also, the Teepavillon (tea house) was built. 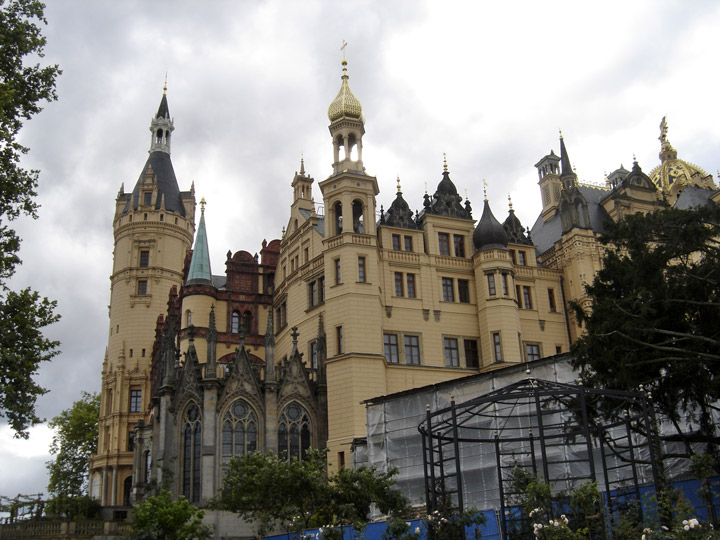 The court moved to Schloss Ludwigslust in 1756. 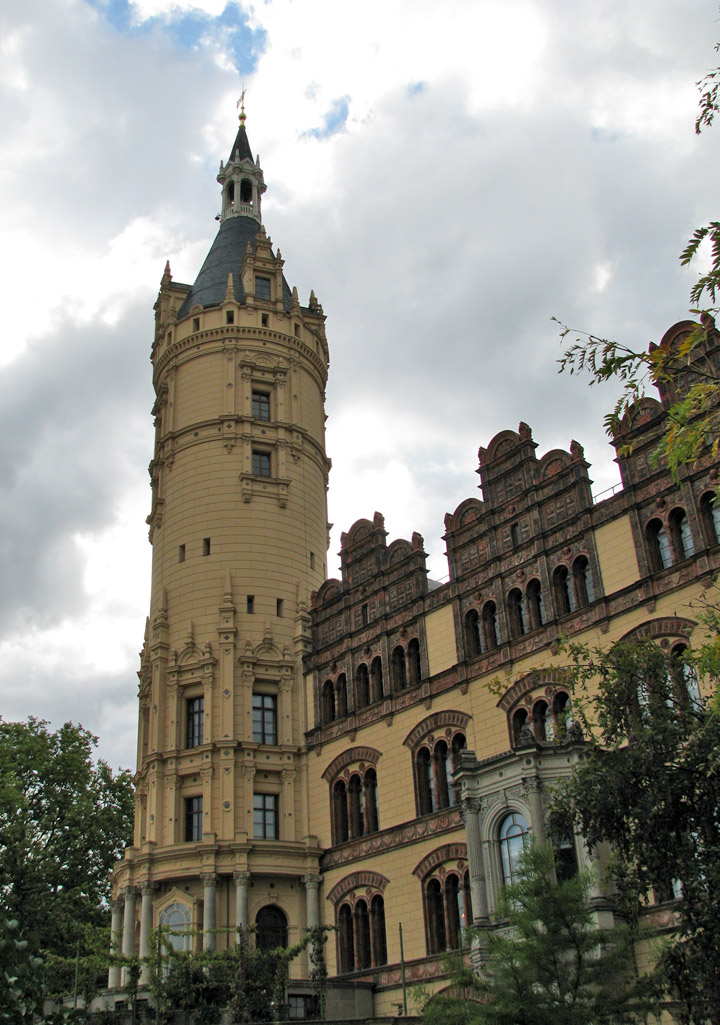 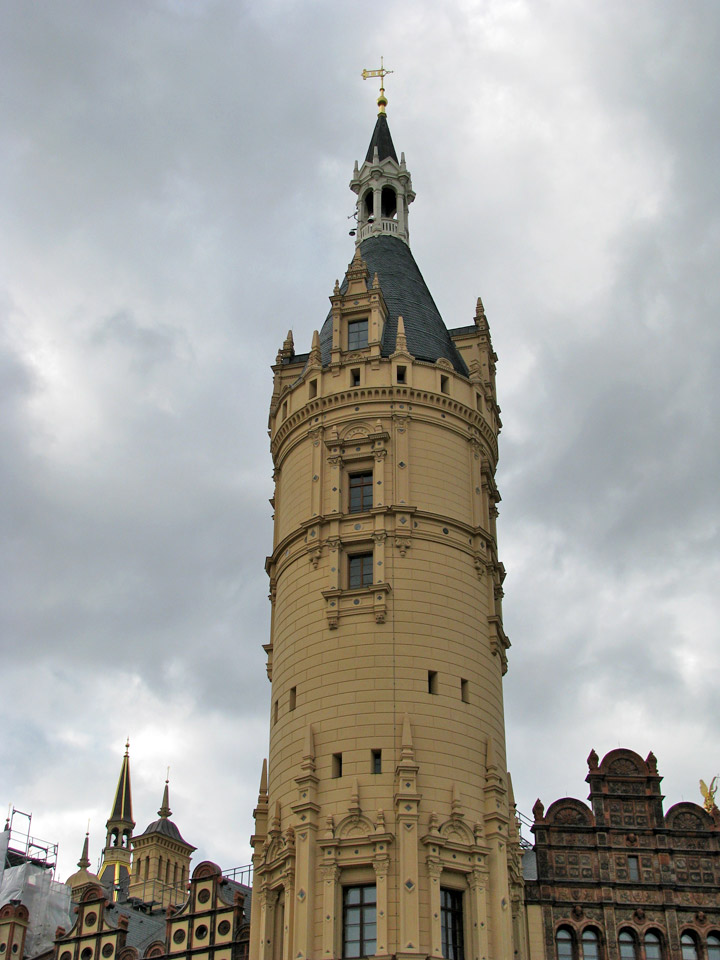 In 1837, the ducal residence moved back to Schwerin, but the building was in relatively bad condition. Additionally, the Grand Duke didn't like the individual buildings' incongruent origins and architectural styles. 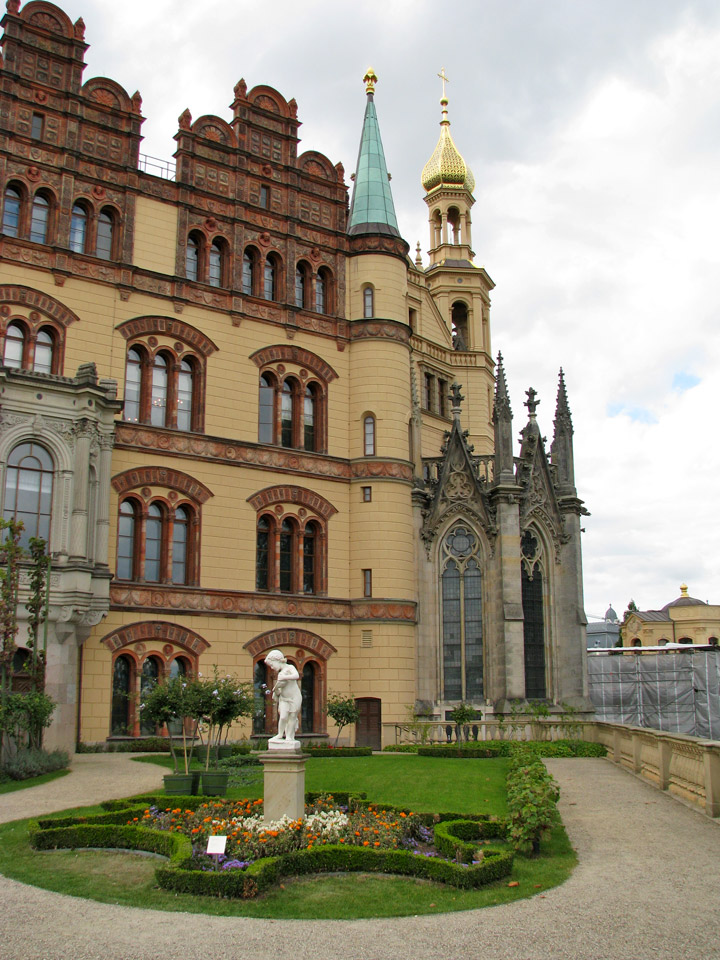 chapel on the right

Grand Duke Friedrich (1800-1842) decided to rebuild the castle, and ordered his architect Georg Adolph Demmler (1804-1886) to do so. A few months later, construction was halted by his successor, Friedrich Franz II (1823-1883), who wanted a complete reconstruction of the historic site. Only some parts of the building from the 16th and 17th century were kept. 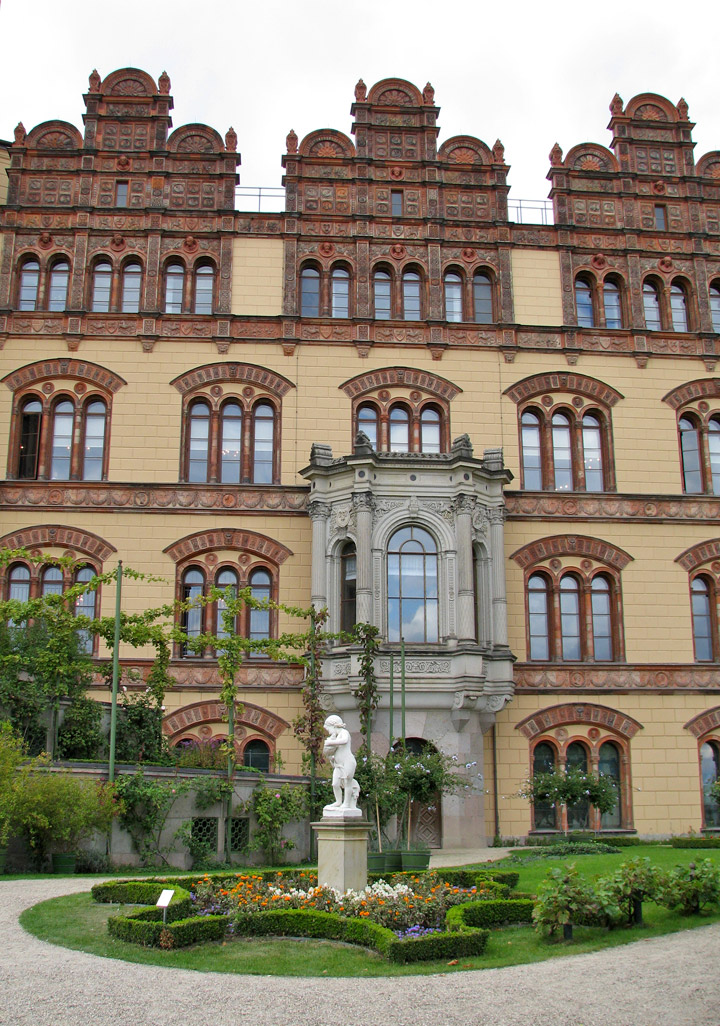 Dresden architect Gottfried Semper (1803-1879) and Berlin architect Friedrich August Stüler (1800-1865) could not convince the grand duke of their plans. Instead, Demmler included elements of both of them into his plan, but would find inspiration in French Renaissance castles. It became the most admired master work of the student of Karl Friedrich Schinkel. He also planned a government building in 1825-26 located at Schlossstraße (today the State Chancellery). 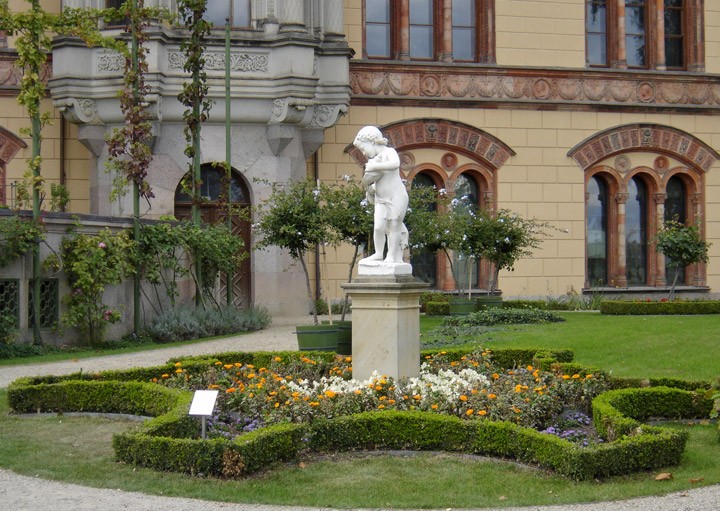 Renaissance châteaux of the Loire valley such as Chambord also inspired him and contributed to the construction from 1843 until 1851. 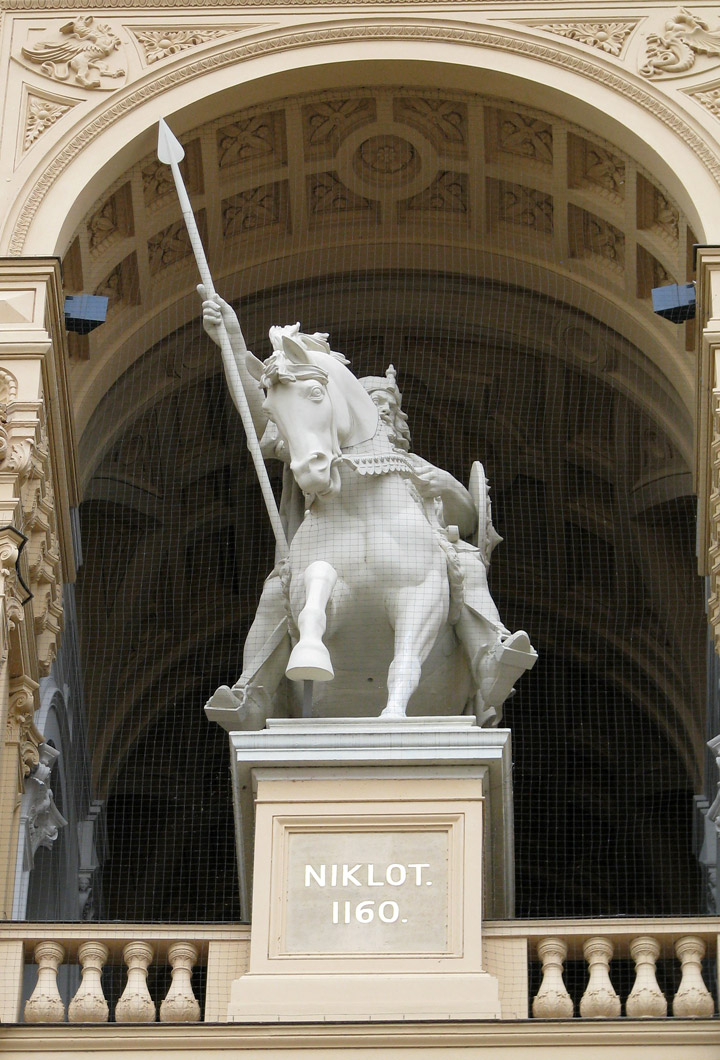 His successor Stüler, again, changed a few things, and included a statue of Niklot on horseback, and the pompous cupola. For the interior design, Heinrich Strack (1805-1880) from Berlin was chosen. Most of the work was done by craftsmen from Schwerin and Berlin. 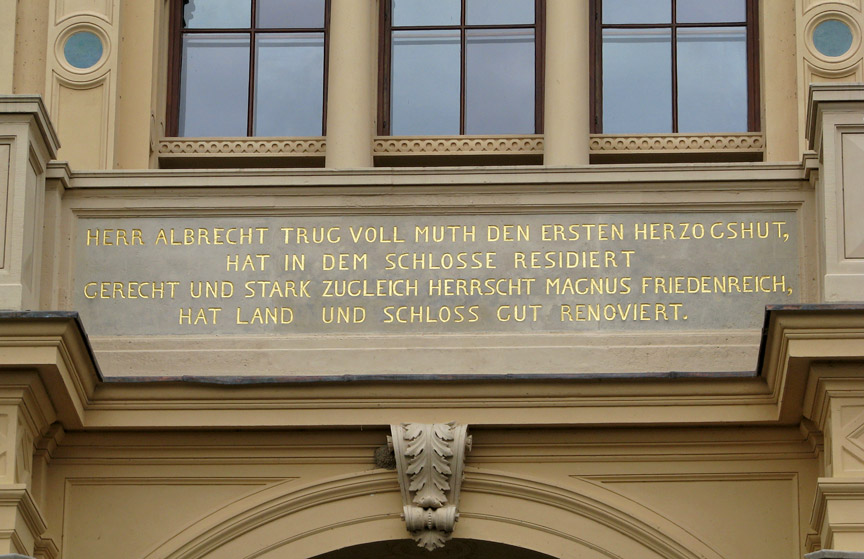 There was a fire in the castle in December 1913. The revolution in 1918 resulted in the abdication of the Grand Duke, but only the exterior reconstruction had been completed. It later became a museum and in 1948 the seat of parliament. The German Democratic Republic, opposed to nobility, used it as a college for kindergarten teachers from 1952-1981. Then it was a Museum again until 1993. The Orangerie had been a technical museum since 1961. From 1974 on, some renovated rooms were used as an art museum. 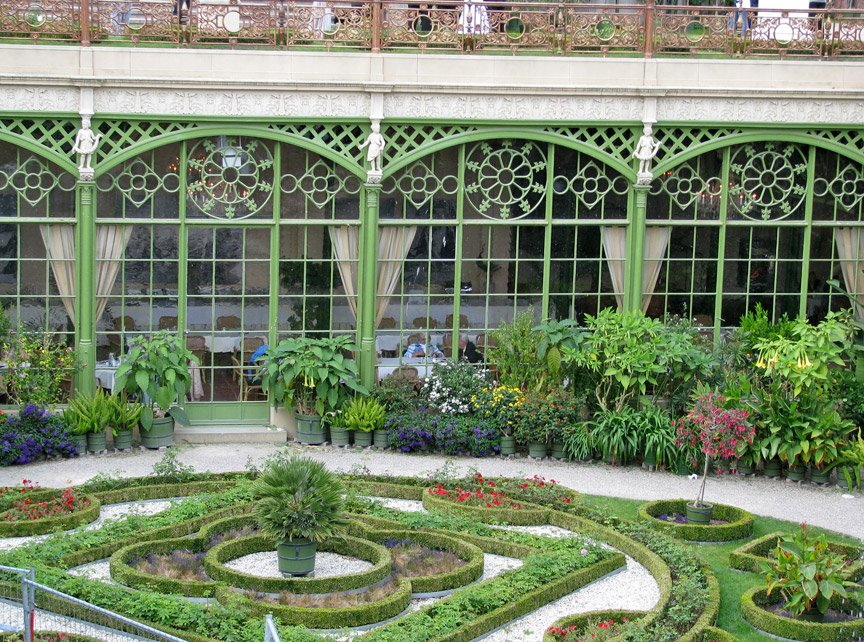 Since late 1990, it is once again a place of government and representation as the seat of the parliament of State of Mecklenburg-Vorpommern. Since then, massive renovation efforts have been conducted and are, due to the complexity of a castle of this size, still in progress. 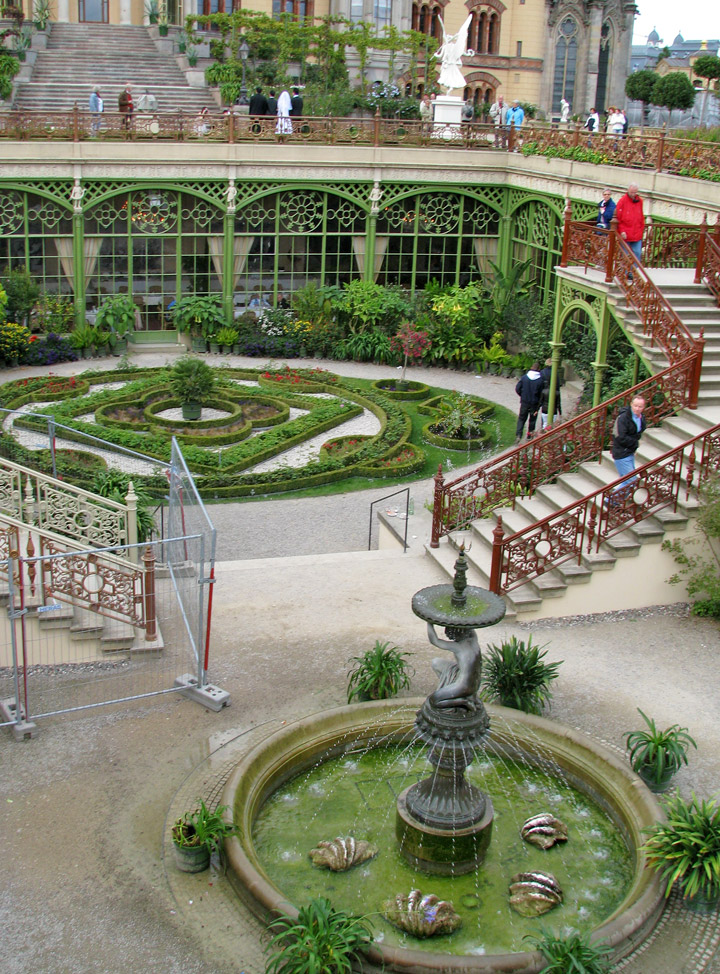 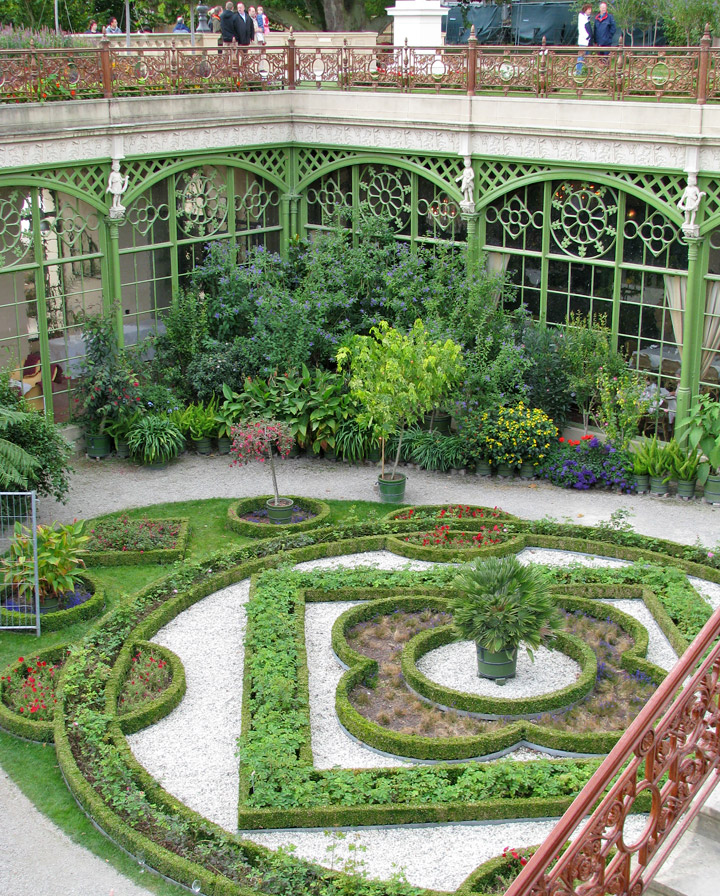 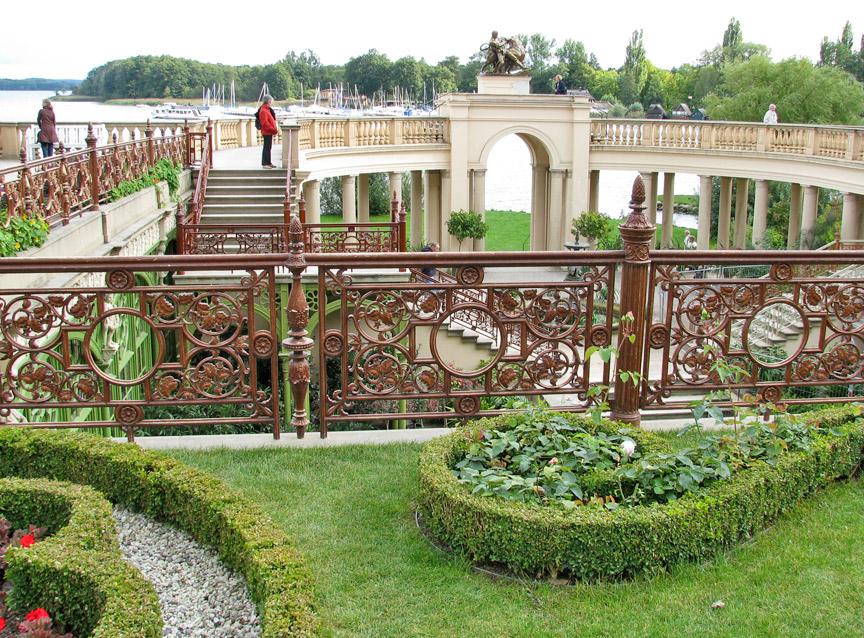 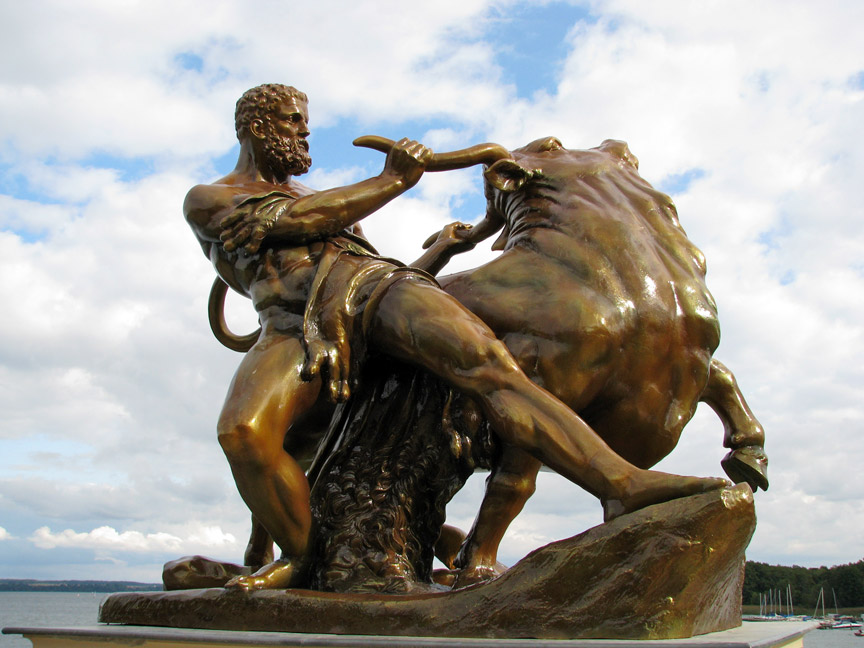 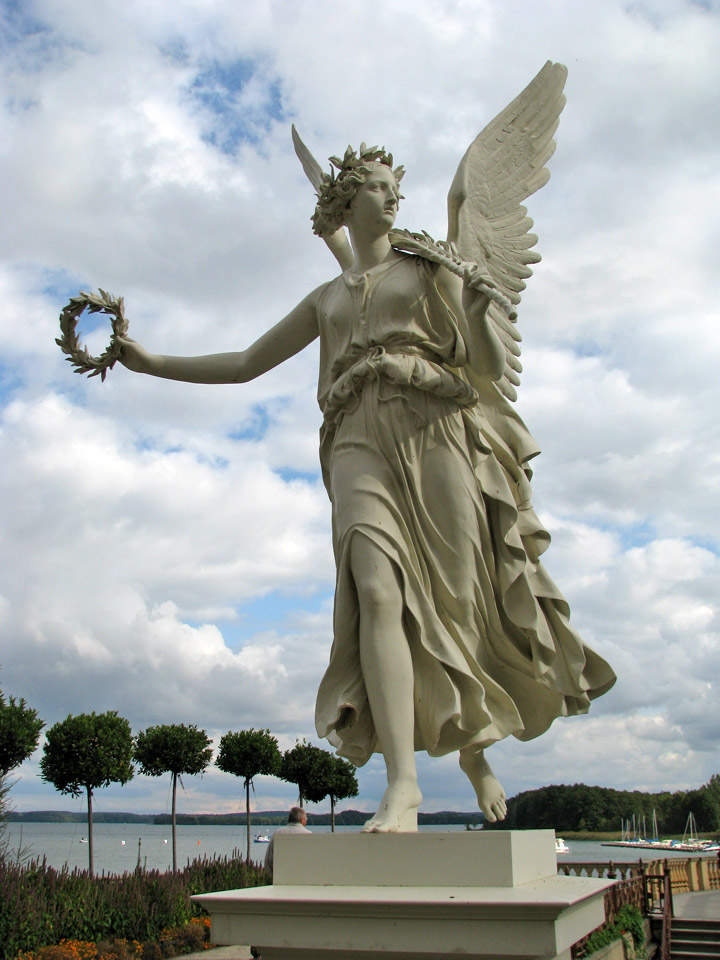 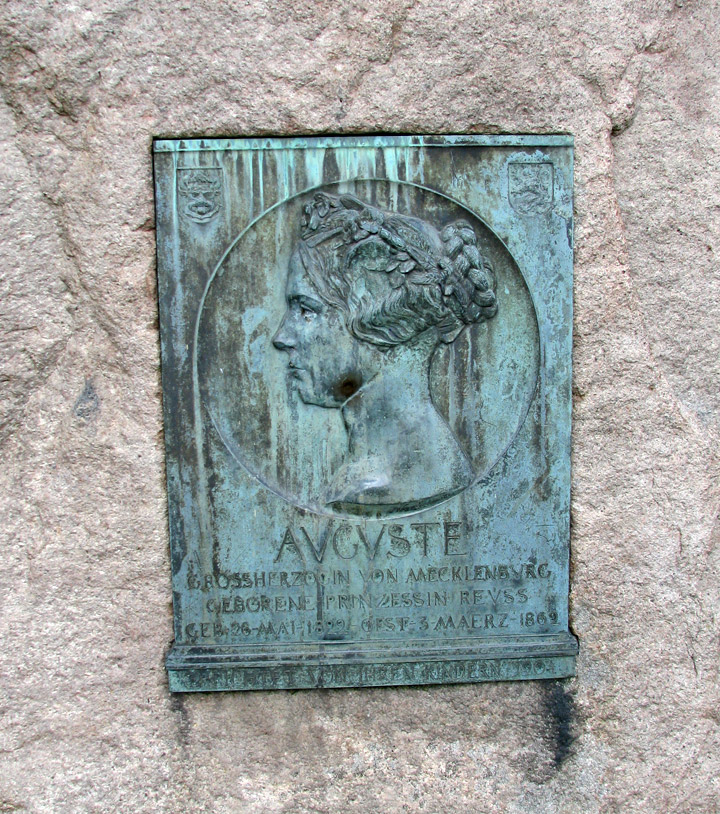 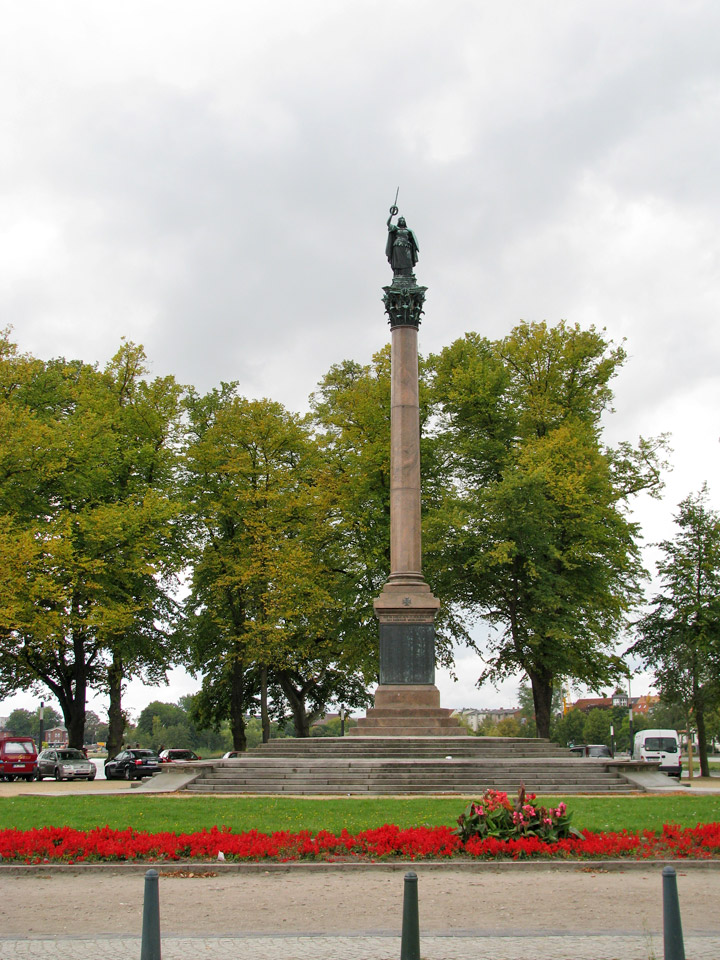 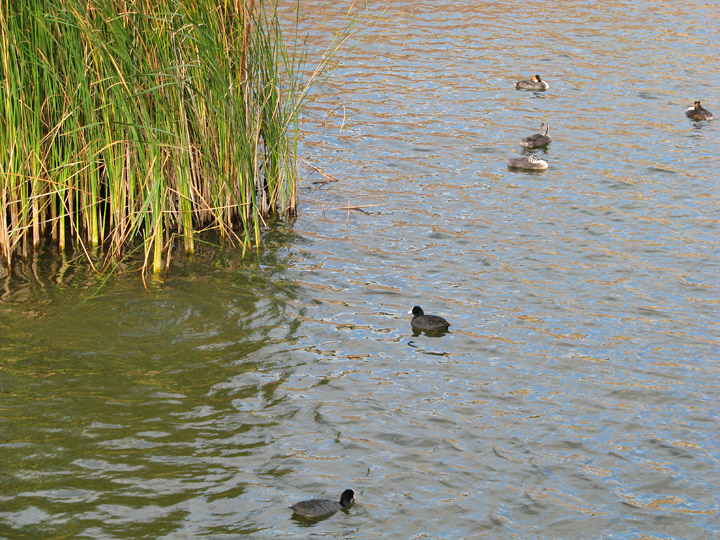 grebes in the lake 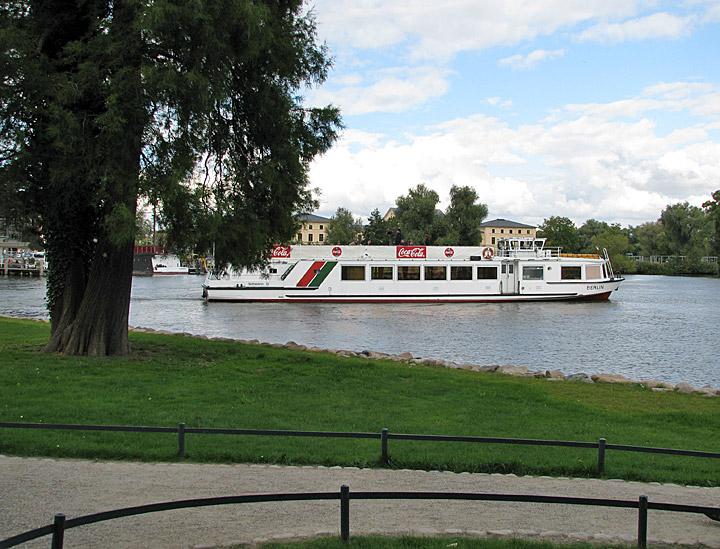