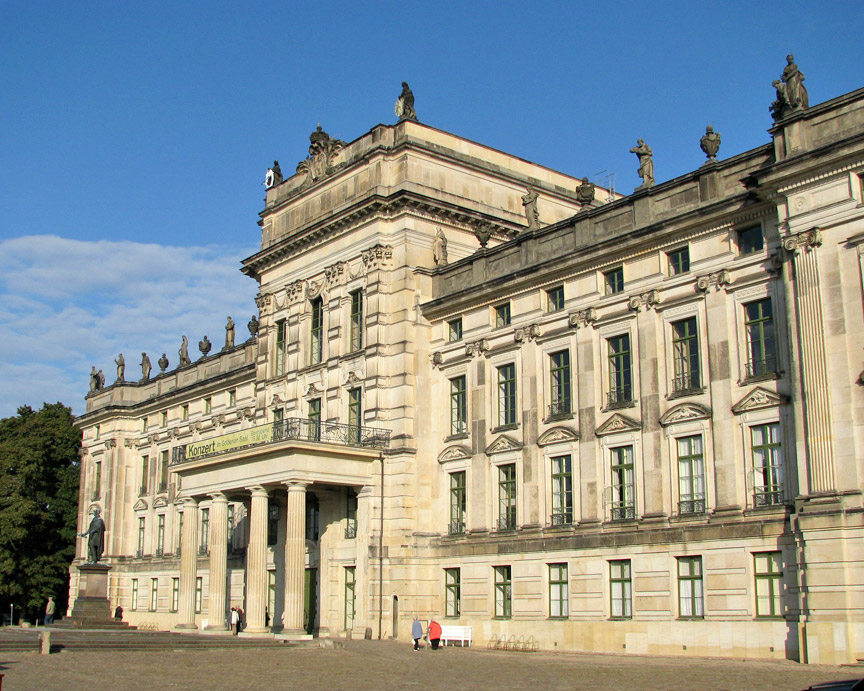 Schloss Ludwigslust (today in Mecklenburg-Vorpommern), like the Château of Versailles, started existence as a hunting lodge rebuilt as a luxurious retreat from a capital (in this case Schwerin, which became for a time (1765-1837) the center of government. It was the joy of Prince Christian Ludwig, the son of the Duke of Mecklenburg-Schwerin, hence "Ludwigslust" 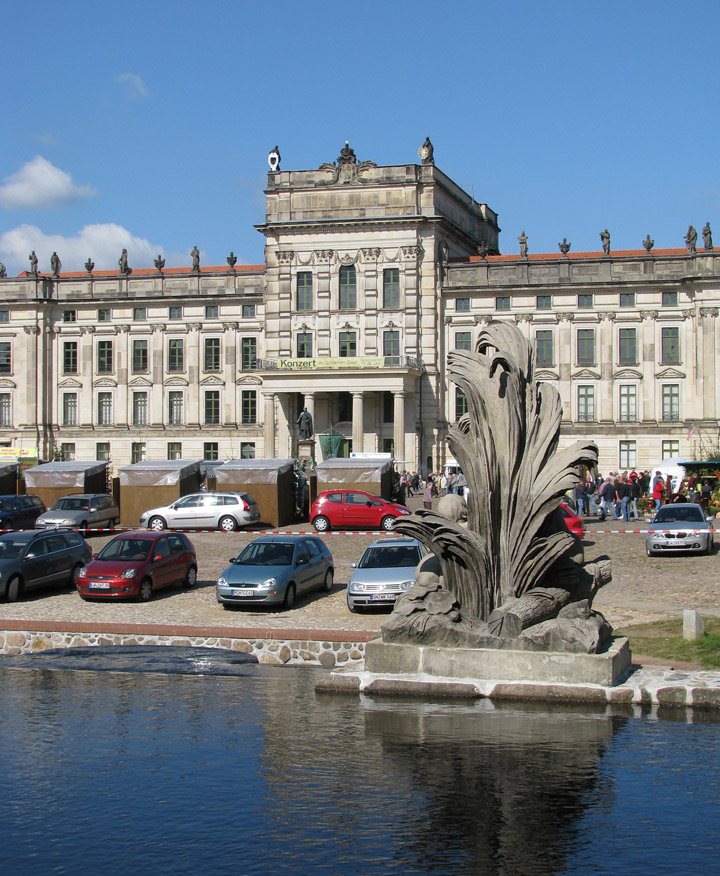 Ludwigslust had its origins in a simple hunting lodge within a day's ride (36 km) of the ducal capital, Schwerin. In 1724 Prince Christian Ludwig, the son of the Duke of Mecklenburg-Schwerin, decided to build a hunting lodge on this site, near a hamlet called Klenow. Even after he became duke in his turn in 1747, he passed most of his time at this residence, which he called Ludwigslust ("Ludwig's joy"). In 1765, Duke Friederich made Ludwigslust the capital of the duchy instead of Schwerin. Consequently the little town that had already grown in the service of the schloss, was further expanded, and a cornerstone for a new, grander residenz was laid directly behind the old hunting box in 1768. In the years 1772-1776 Ludwigslust was rebuilt to plans by Johann Joachim Busch. The Late Baroque Schloss is built on an E-plan foundation, with a higher projecting central corps de logis in three bays, which appears to penetrate its wings from front to rear; the richer Corinthian order of the central block contrasts with the Ionic of the wings. On the urban side, the central block makes some compromises with the new neoclassical style in the flat planes of the façade, which simply occupies one flank of the square centered on it, without embracing the space in a cour d'honneur and in the severe Doric portico. The structure is brick, clad in the local sandstone; forty over-lifesize allegorical figures, also in sandstone, by Rudolf Kaplunger, alternating with vases, crown the low attic above the cornice. 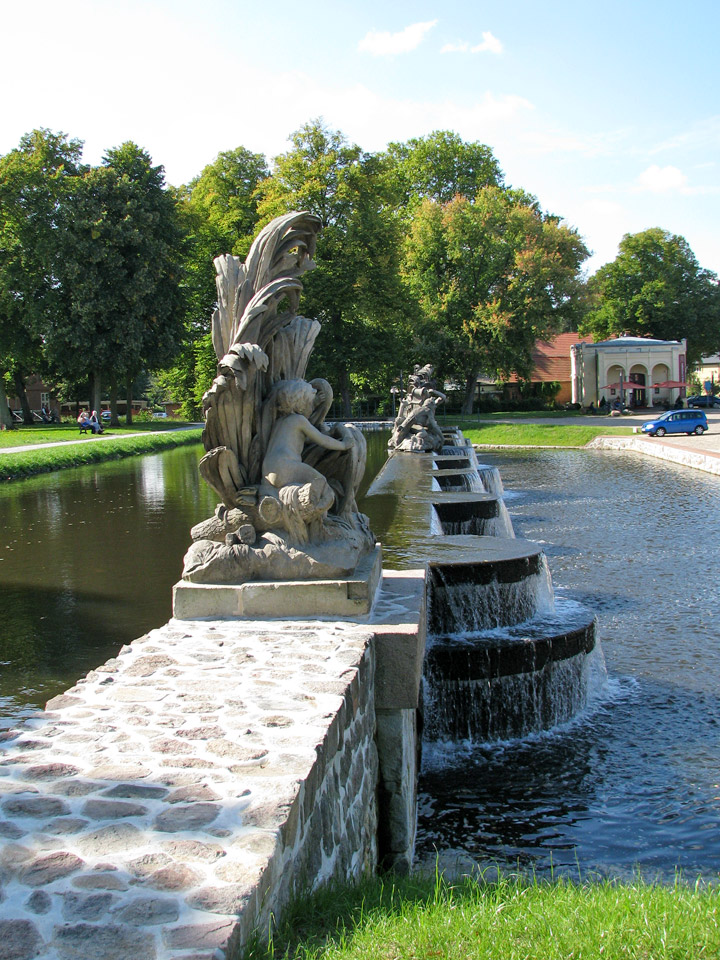 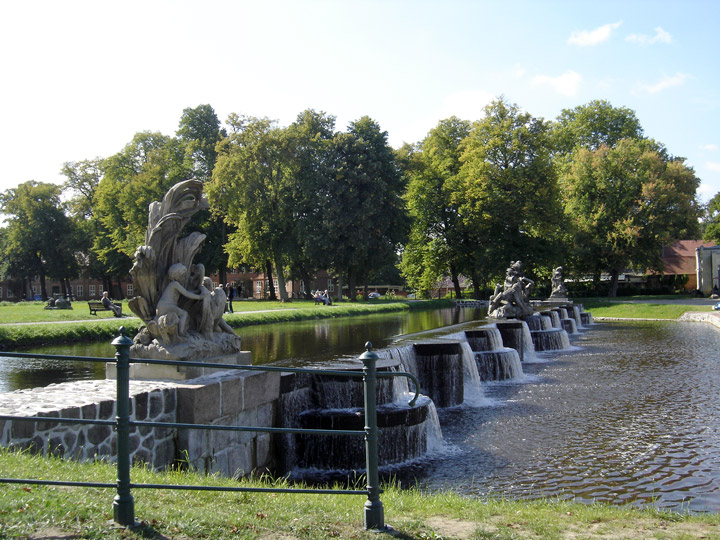 The interiors of Ludwigslust are more fully neoclassical. The grand reception rooms are on the piano nobile, or Festetage ("Reception floor"), above a low ground floor that contained guestrooms. The Goldener Saal ("Gilded Hall") in the central block rises through two storeys, with a colossal order of Corinthian columns and massive decorations carried out in stucco and the innovative moldable and modelable paper-maché called Ludwigsluster Carton; it is used today for summertime concerts. One flanking range was semi-public, with a sequence of antechamber, salon and audience chamber, and a gallery. The opposite range was semi-private, with the Duke's drawing-room and bedchamber (hung with framed miniatures), a cabinet and a gallery with a porcelain chimneypiece. 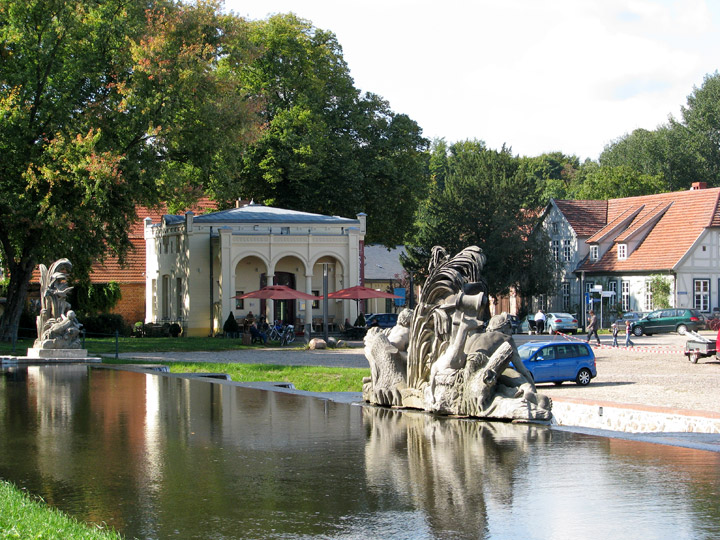 The Schloss was the center-point of a range of grand buildings sited in deference to it, including the Hofkirche that served as the court chapel. A central avenue through the town was laid out, centered on the Schloss; on the garden side the axis was carried through as a central ride through the enclosing woodland, still reaching the slightly elevated wooded horizon today. 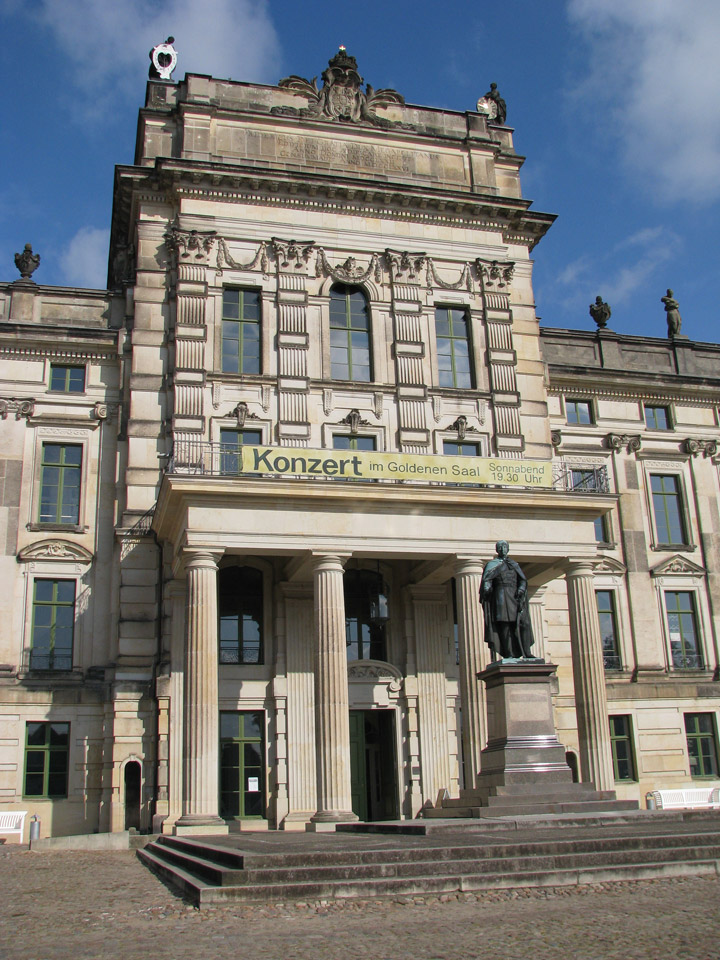 In 1837 Grand Duke Paul Friedrich returned Schwerin to its capital status. As a summer residence, Schloss Ludwigslust was preserved from further alterations. In the mid-nineteenth century much of the park was re-landscaped in the more naturalistic English landscape garden manner, under the direction of a garden designer with an extensive clientele among the German aristocracy, Peter Joseph Lenné. Water near the schloss was recast in more naturalistic manner and the surrounding woodland edges were varied, with clumps of trees as outliers, but the main axial allée, the Hofdamenallee ("Ladies-in-Waiting Allée") centered on the palace, stretches dead straight through the woods, and the narrow Great Canal, laid out at an angle to one side, still extends a kilometer and a half.

Photos of the Schloss Park 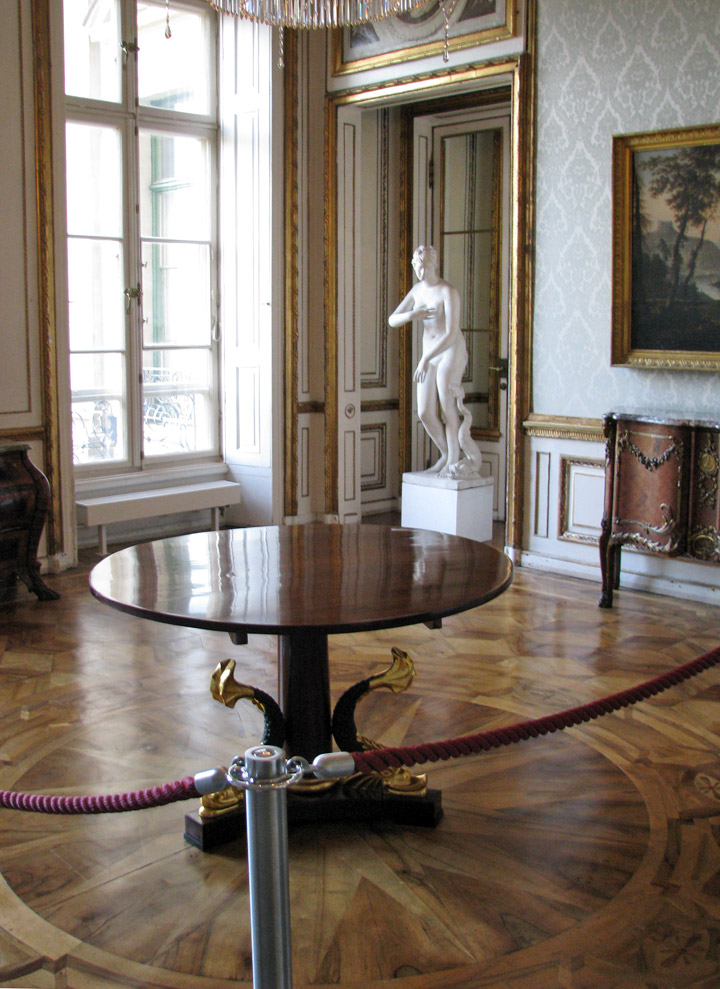 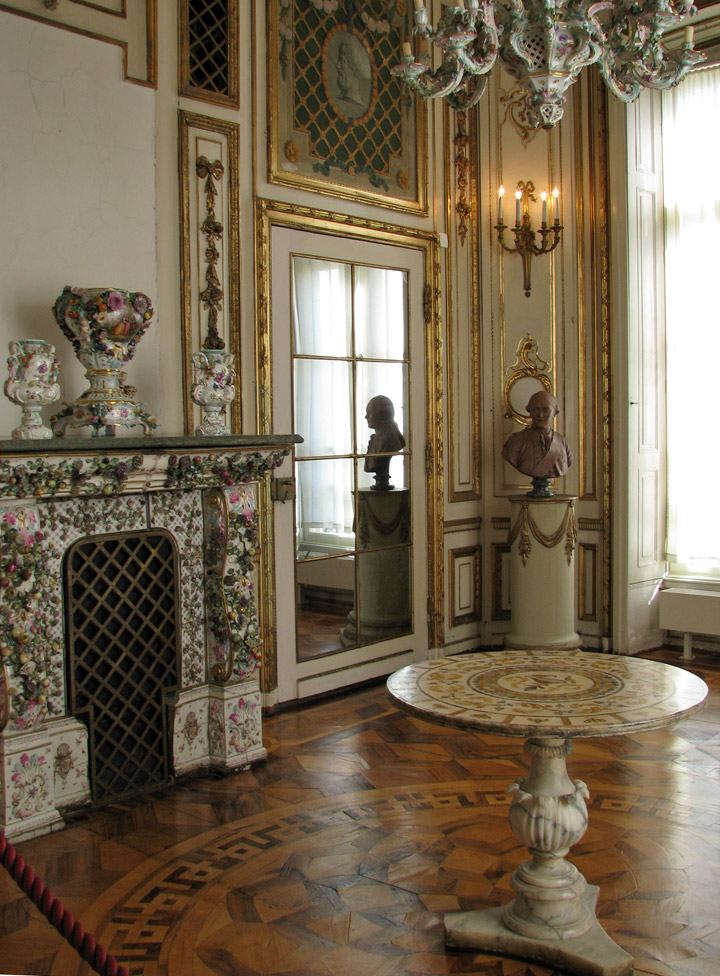 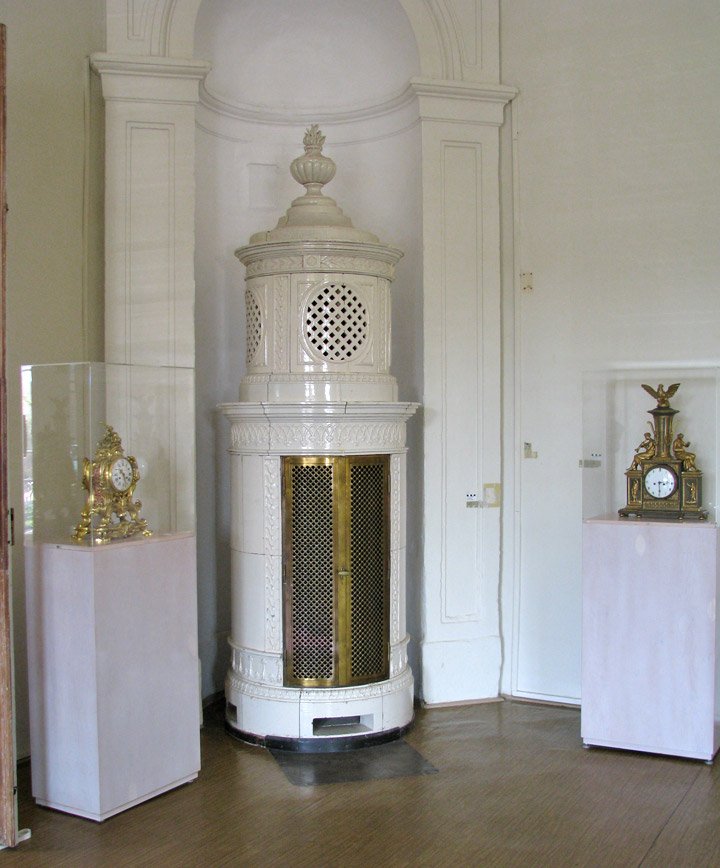 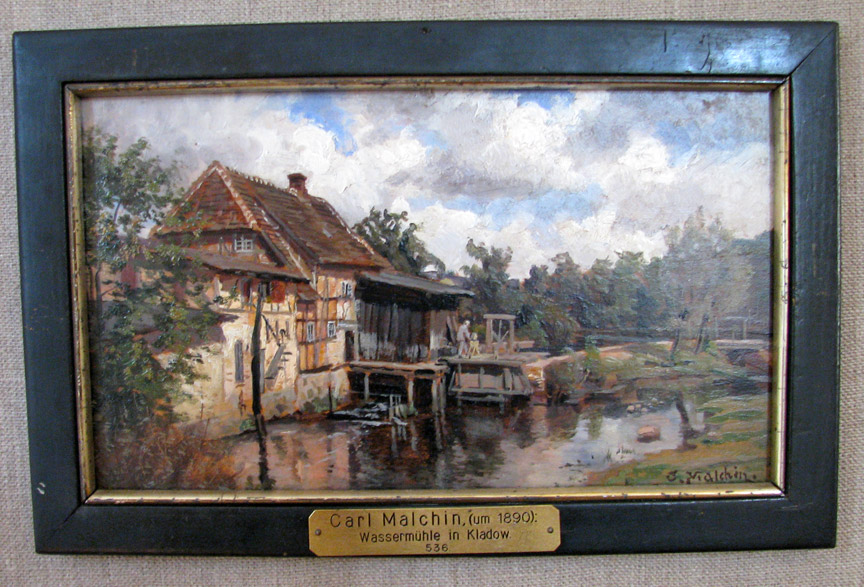 The deposed Mecklenburg-Schwerin family continued to use Ludwigslust until 1945. Today it houses the Staatlichen Museum Schwerin, the "State Museum of Schwerin", with a collection of paintings by Jean-Baptiste Oudry and busts by Jean Antoine Houdon that represent the tastes of the Mecklenburg dukes. 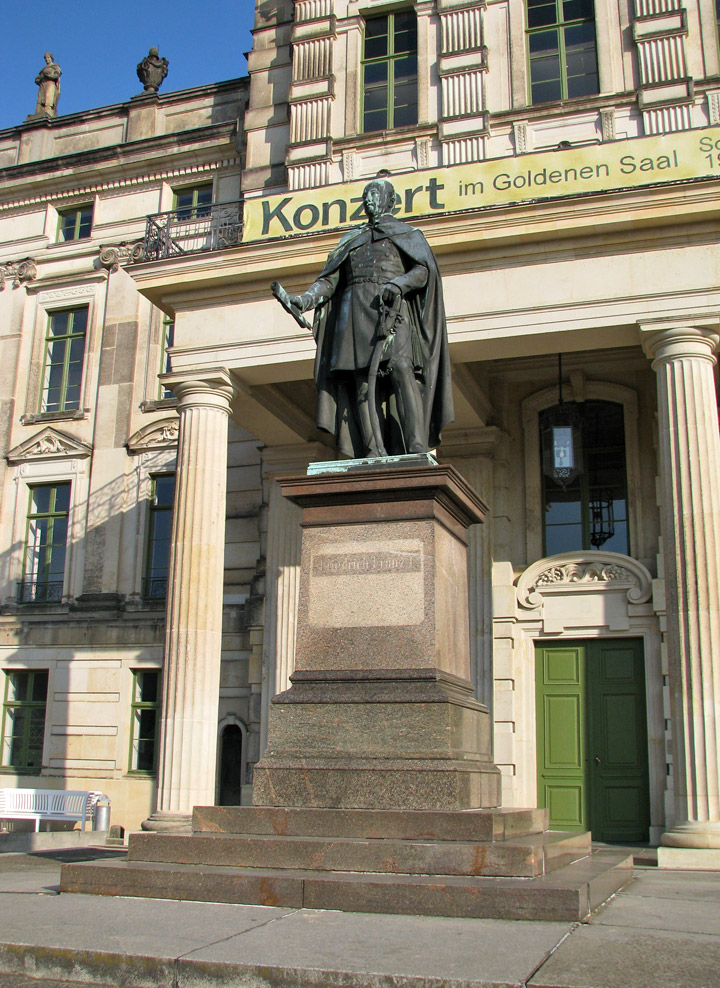 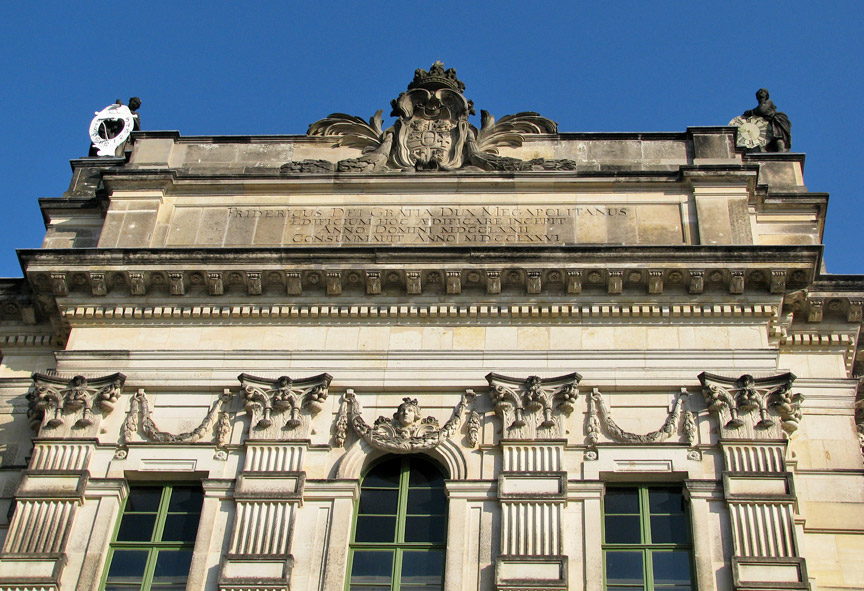 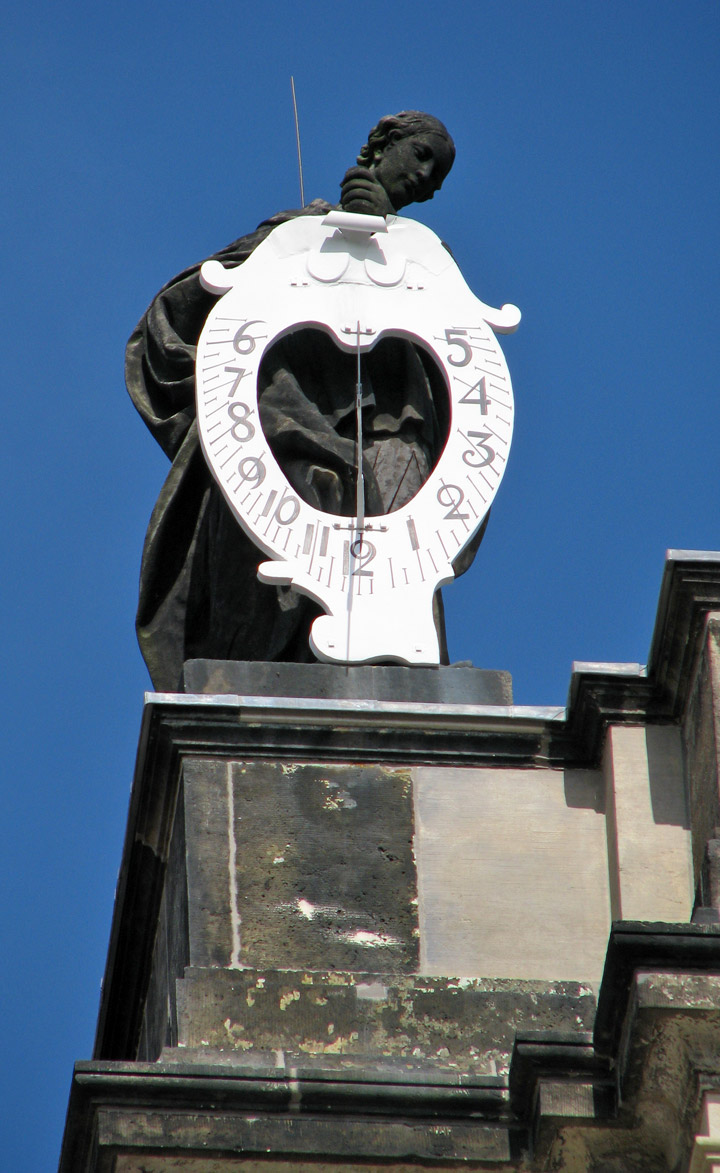 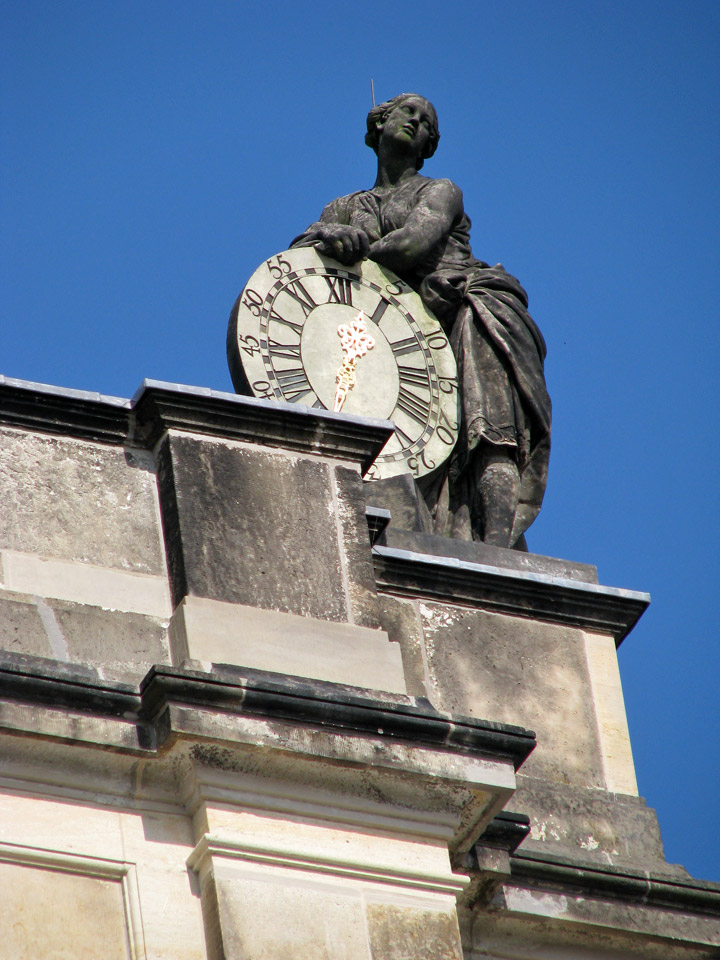 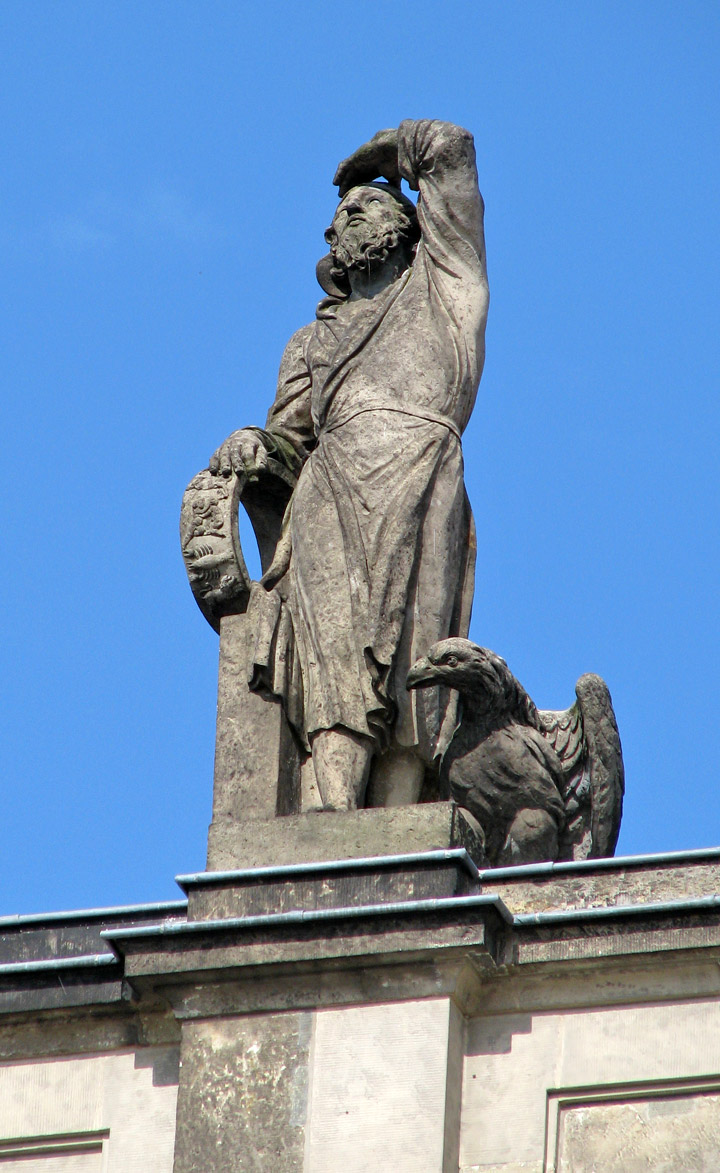 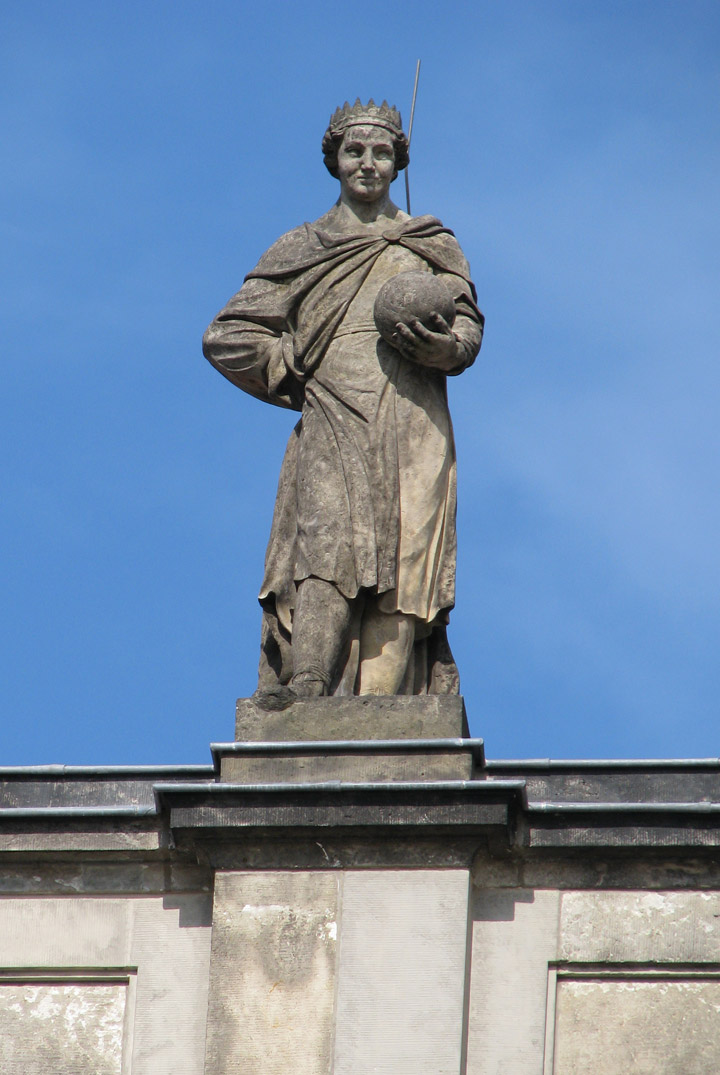 In 1844 William Makepeace Thackeray set a high-living episode of his amoral eighteenth-century hero Barry Lyndon at Ludwigslust, where Barry, pursuing a countess, is accompanied by a black page named Zamor who is dressed in Turkish attire, and his pavillion is "fitted up in the Eastern manner, very splendid. 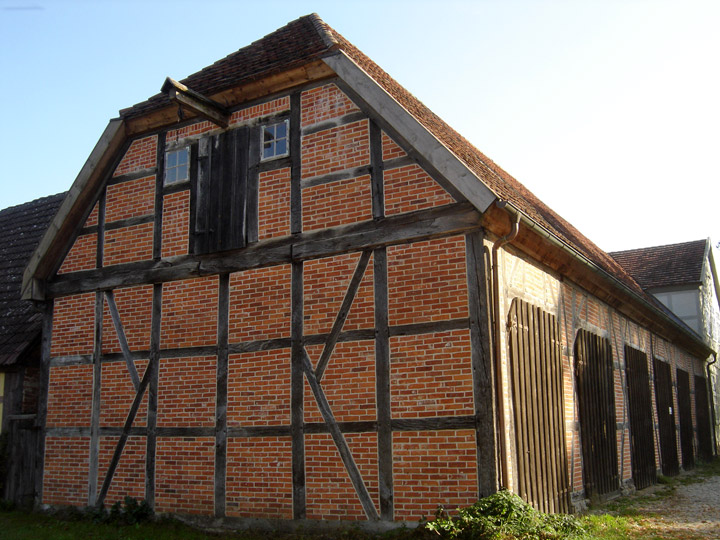 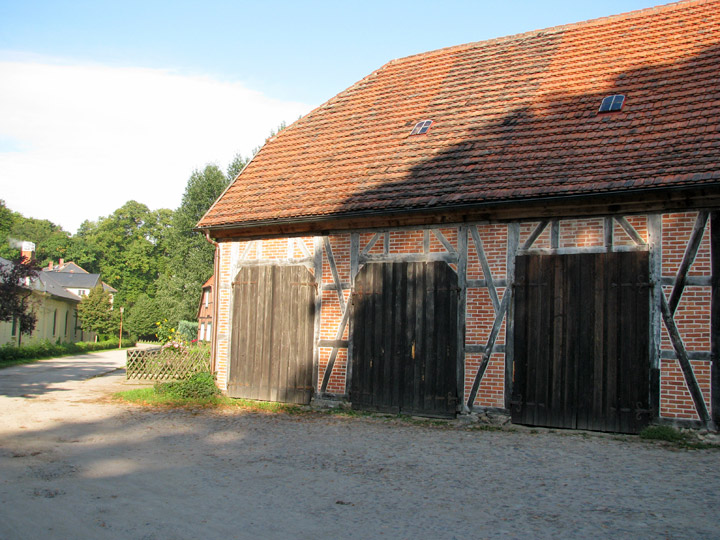 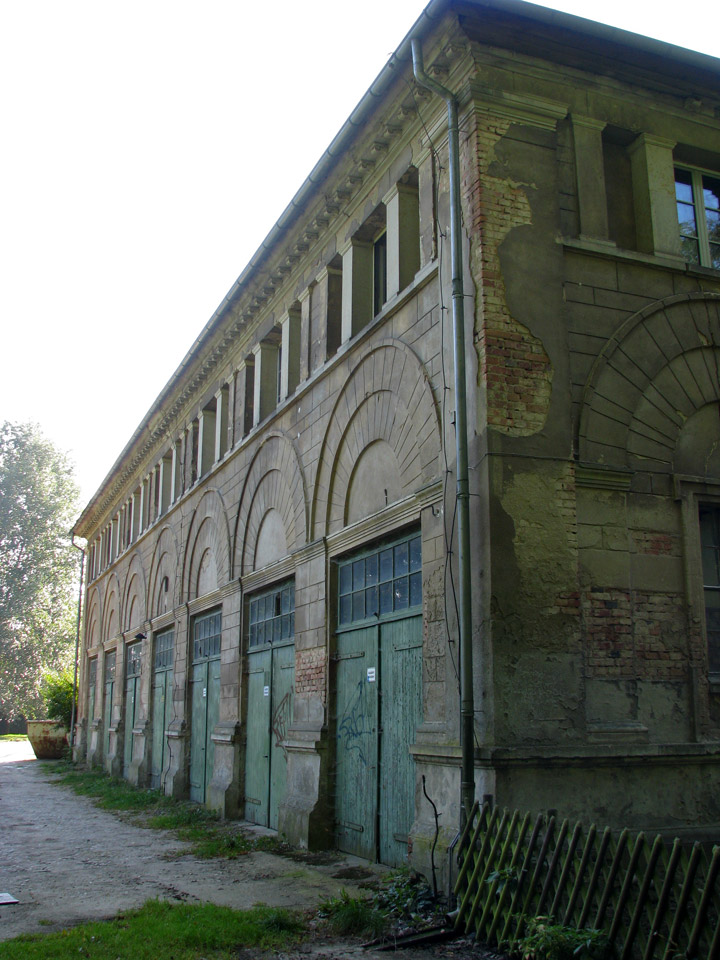