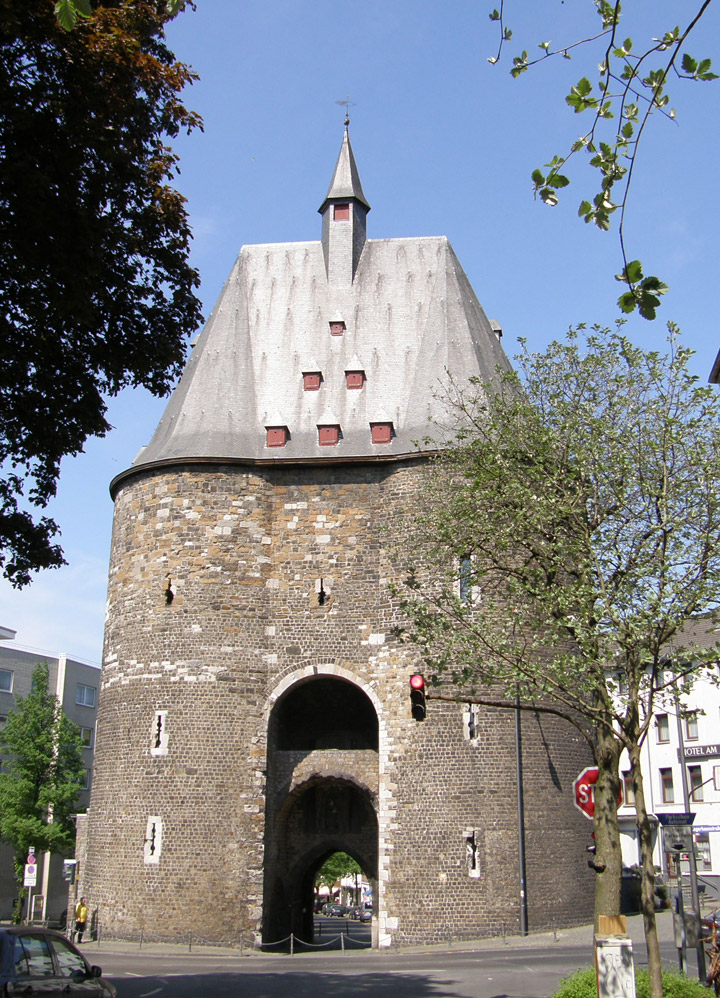 Aachen (help·info) (Dutch Aken, French Aix-la-Chapelle, Latin Aquisgranum, Ripuarian Oche) is a spa city in North Rhine-Westphalia, Germany, on the border with Belgium and the Netherlands, 65 km to the west of Cologne, and the westernmost city in Germany. 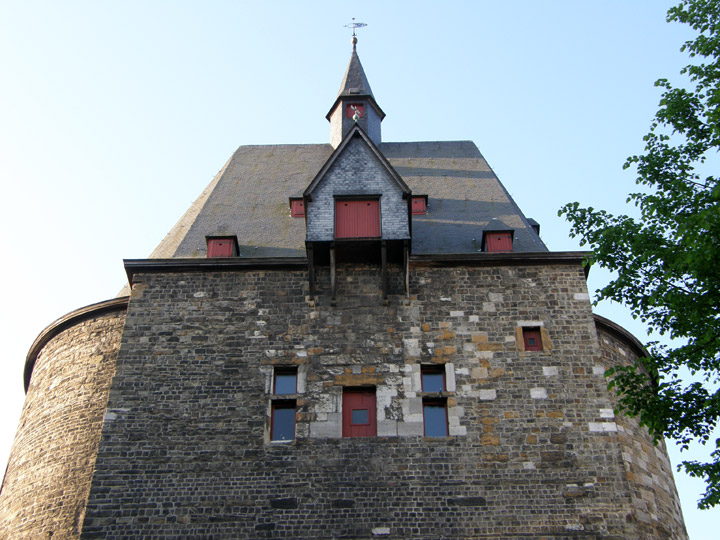 A quarry on the Lousberg which was first used in Neolithic times attests to the long occupation of the site of Aachen. No larger settlements, however, have been found to exist in this remote rural area, distant at least 15 km from the nearest road even in Roman times, up to the early medieval period when the place is mentioned as a king's mansion for the first time, not long before Karl der Große, Charlemagne became ruler of the Franks. 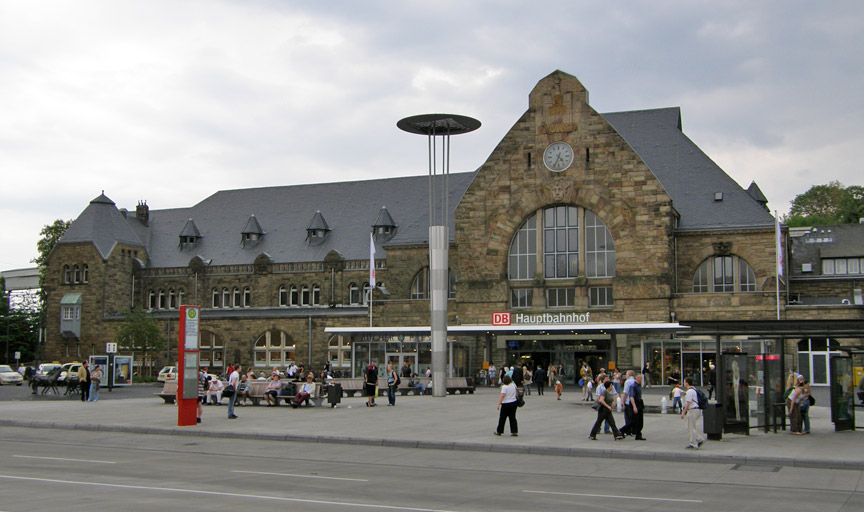 Since Roman times, the hot springs at Aachen have been channeled into baths (none of which are still in use). There is no documentary proof that the Romans named the hot sulphur springs of Aachen Aquis-Granum. The name Granus has lately been identified as that of a Celtic deity, but there is no proof of this since a deity of this name is not attested anywhere. In French-speaking areas of the former Empire, the word aquas was turned into aix, hence Aix-la-Chapelle. 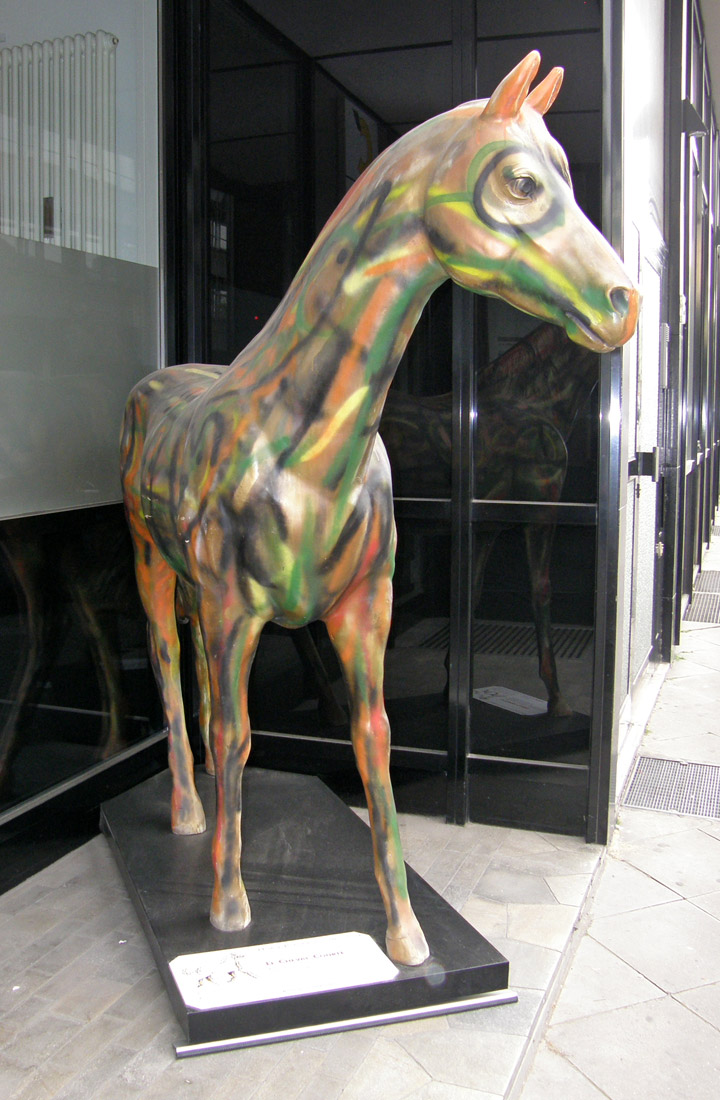 
After Roman times, Einhard mentions that in 765–6 Pippin the Younger spent both Christmas and Easter at Aquis villa ("Et celebravit natalem Domini in Aquis villa et pascha similiter."), which must have been sufficiently equipped to support the royal household for several months. In the year of his coronation, 768, Charlemagne came to spend Christmas at Aachen for the first time. He liked the place and stayed there in a mansion which he may have extended, although there is no source attesting any wider building activity at Aachen in his time apart from the building of the collegiate church wrongly described as "the palace chapel" (since 1929, cathedral). Charlemagne spent most winters between 800 and his death in 814 in Aachen in order to enjoy the hot springs. Afterwards, the king was buried in the church which he had built; his original tomb has been lost, while his alleged remains are preserved in the shrine where he was reburied after being declared a saint; his saintliness, however, was never very widely acknowledged outside the bishopric of Liège where he may still be venerated "by tradition". 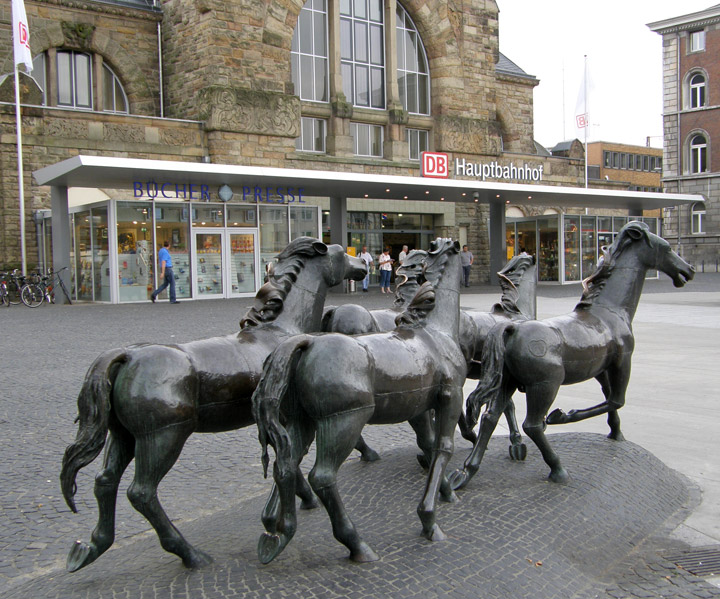 horses at the train station

In 936, Otto I was crowned king in the collegiate church built by Charlemagne. From then on, most kings of Germany destined to be emperors of the Holy Roman Empire were crowned "King of the Germans" in Aachen over the next 500 years. The last king to be crowned here was Ferdinand I in 1531. 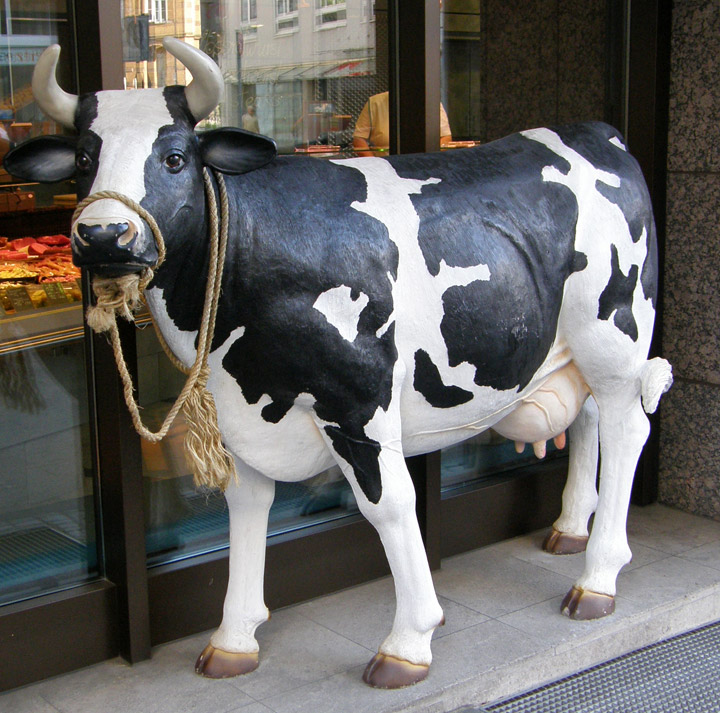 During the Middle Ages, Aachen remained a city of regional importance, depending on its proximity to Flanders to achieve a modest position in the trade in woollen cloths, favoured by imperial privilege. The city remained subject to the Emperor only but was politically far too weak to influence the policies of any of its neighbors. The only dominion it held was that over the neighboring, tiny territory of Burtscheid, ruled by a Benedictine abbess and forced to accept all of its traffic to pass through the "Aachener Reich". Even in the late 18th century, the Abbess of Burtscheid was prevented from building a road linking her territory to the neighbouring estates of the duke of Jülich; the city of Aachen even deployed its handful of soldiers to chase away the road-diggers. 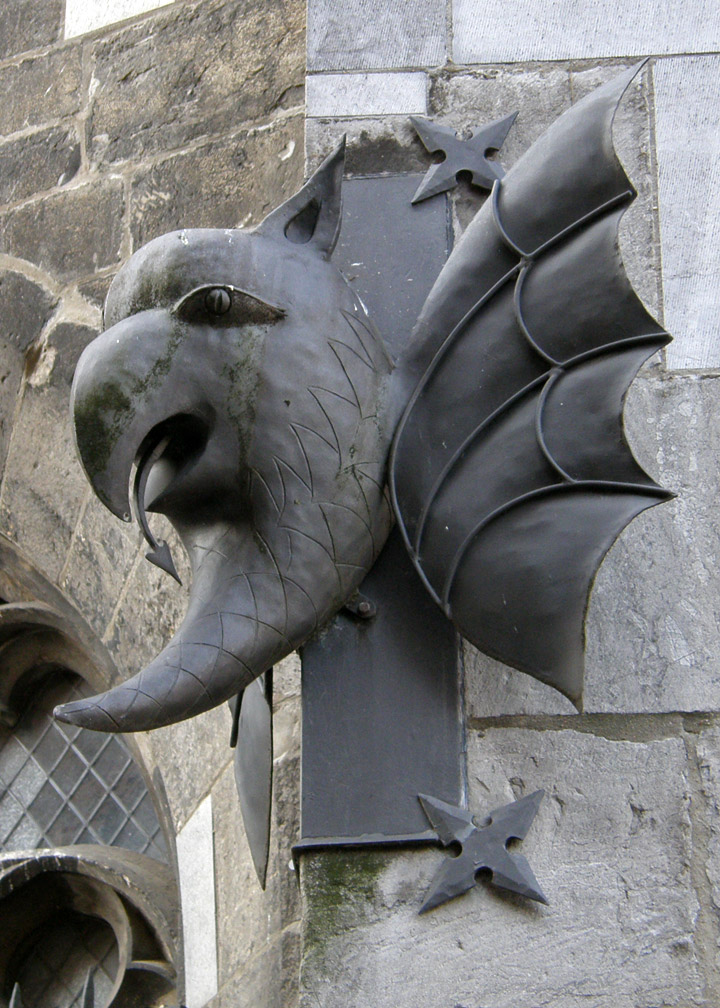 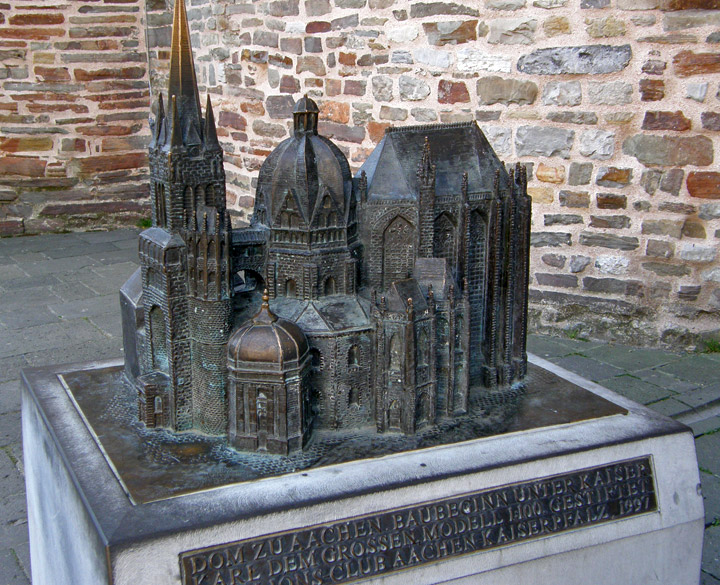 More Photos of the Aachen Cathedral

From the early 16th century and the advent of the reformation, Aachen preserved not much more than some extended local importance. In 1656, a great fire devastated Aachen.[2] It still remained a place of historical myth and became newly attractive as a spa by the middle of the 17th century, not so much because of the effects of its hot springs on the health of its visitors but since Aachen was then — and remained well into the 19th century — one of the centres of high-level prostitution in Europe. Traces of this hidden agenda of the city's history can be found in the 18th century guidebooks to Aachen as well as to other spas; the main indication for visiting patients, ironically, was syphilis; only by the end of the 19th century, rheuma had become the most important object of cures at Aachen and Burtscheid. This explains why Aachen was chosen as site of several important congresses and peace treaties: the first congress of Aachen (often referred to as Congress of Aix-la-Chapelle in English) in 1668, leading to the First Treaty of Aachen in the same year which ended the War of Devolution. The second congress ended with the second treaty in 1748, finishing the War of the Austrian Succession. The third congress took place in 1818 to decide the fate of occupied Napoleonic France. 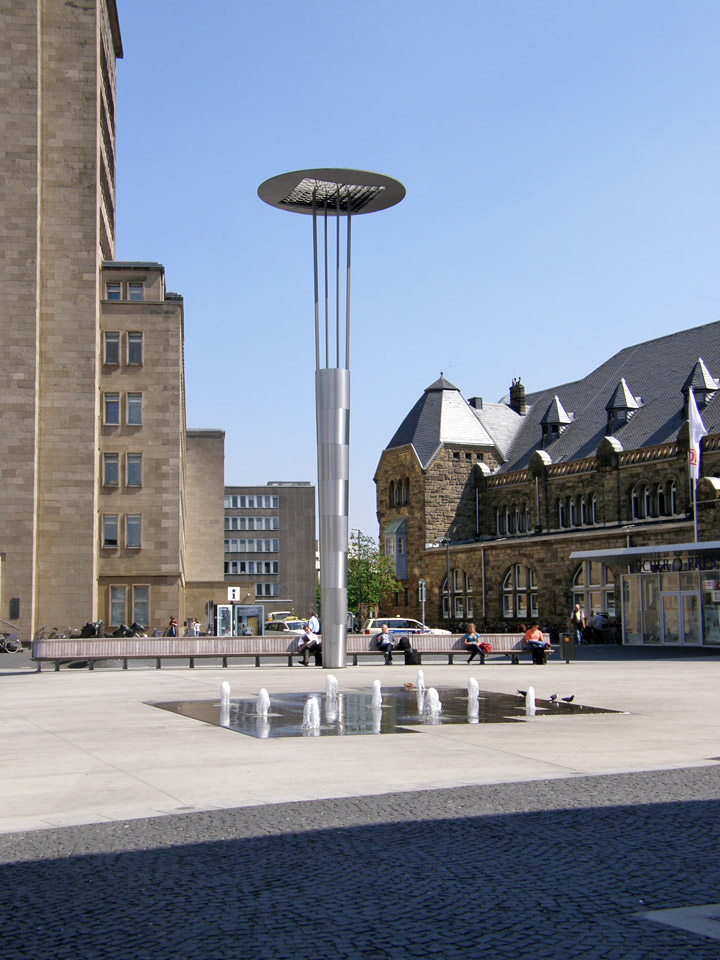 By the middle of the 18th century, industrialization had swept away most of the city's mediæval rules of production and commerce, although the entirely corrupt remains of the city's mediæval constitution were kept in place (compare the famous remarks of Georg Forster in his Ansichten vom Niedrrhein) until 1801, when Aachen became the "chef-lieu du département de la Roer" in Napoléon's First French Empire. In 1814, the kingdom of Prussia took over and the city became one of its most socially and politically backward centres until the end of the 19th century. By 1880, the population was 80,000. The railway from Cologne to Belgium passed through Aachen from 1840. The city suffered total overcrowding and deplorable sanitary conditions through to 1875 when the mediæval fortifications were finally abandoned as a limit to building operations and new, less miserable quarters were built towards the eastern part of the city where drainage of waste liquids was easiest. In the 19th century and up to the 1930s, the city was important for the production of railway locomotives and carriages, iron, pins, needles, buttons, tobacco, woollen goods, and silk goods. 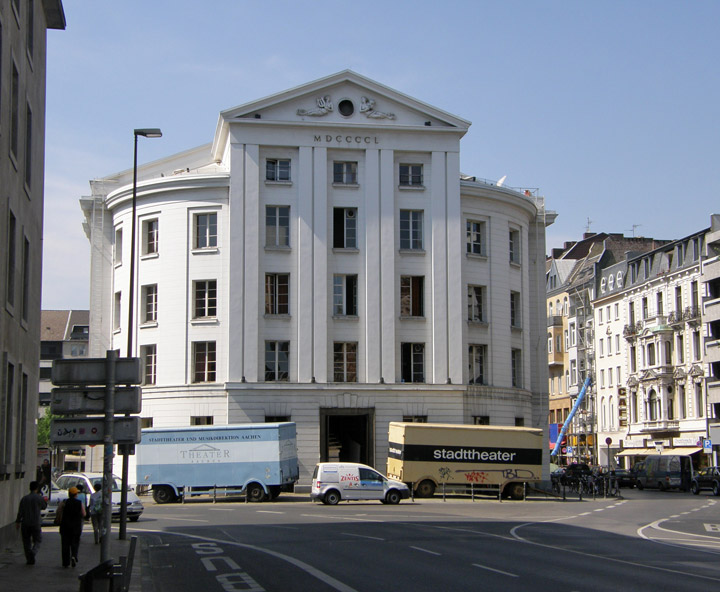 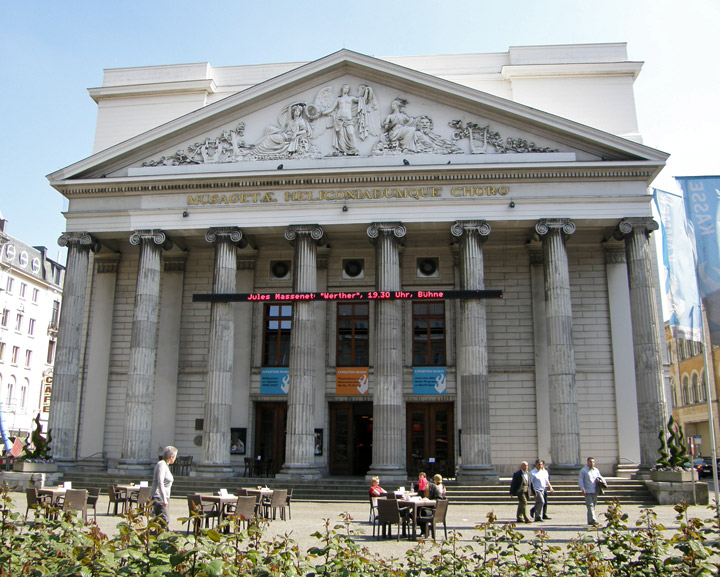 Before WWII, Anne Frank, with her mother and sister, stayed at Aachen for a short time. Her grandmother, Auguste Holländer, is buried at the Jewish graveyard here. 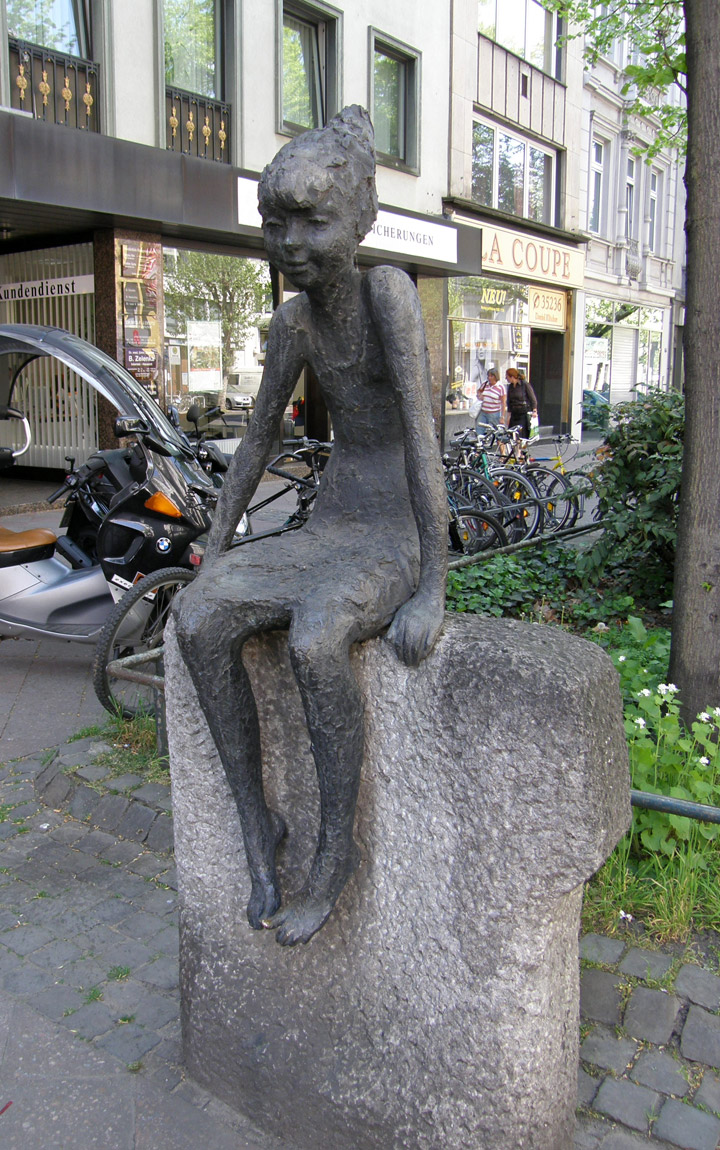 Aachen was destroyed haphazardly — and in some parts completely — during World War II,[1] mostly by bombing, in the latest phase of non-surrender by American artillery fire and through deliberate destruction wrought by the SS division employed to keep Aachen out of allied hands as long as possible. Damaged buildings include the mediæval churches of St. Foillan, St. Paul and St. Nicholas, as well as the Rathaus (city hall), although the Aachen Cathedral was largely unscathed. The city was liberated, with only 4000 inhabitants who had disobeyed Nazi evacuation orders, on October 21, 1944, the first German city to be free from Nazi rule. Its first Allied-appointed mayor, Franz Oppenhoff, was murdered by a Nazi Werwolf commando. 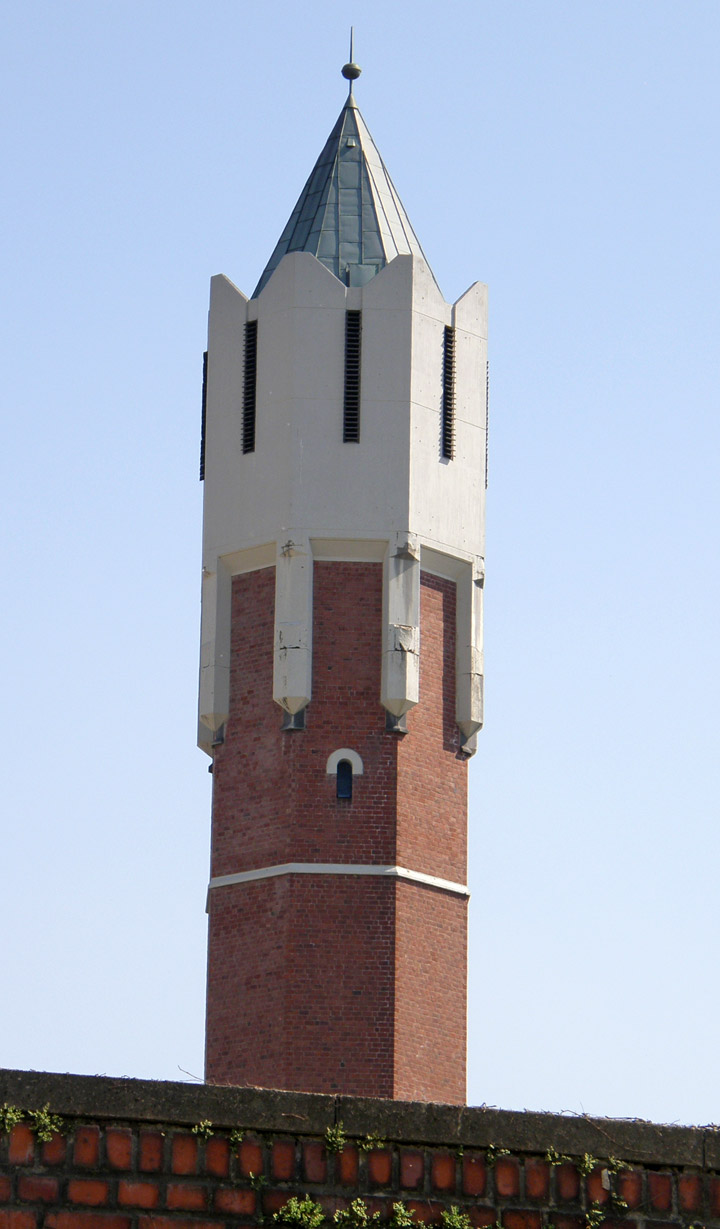 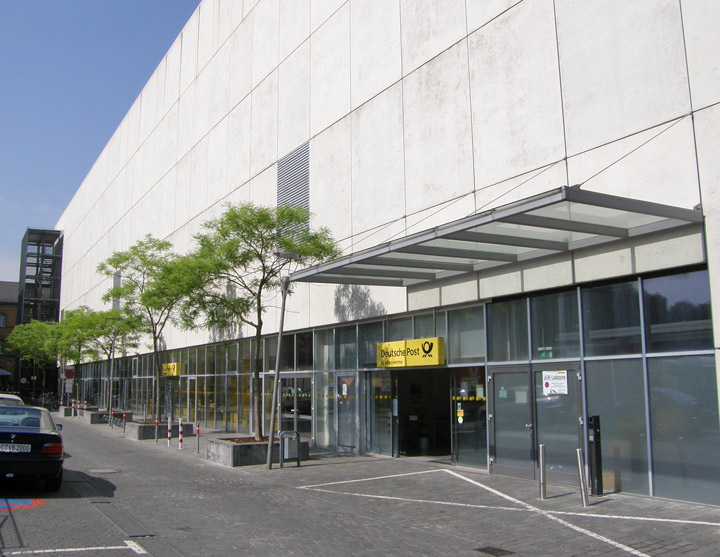 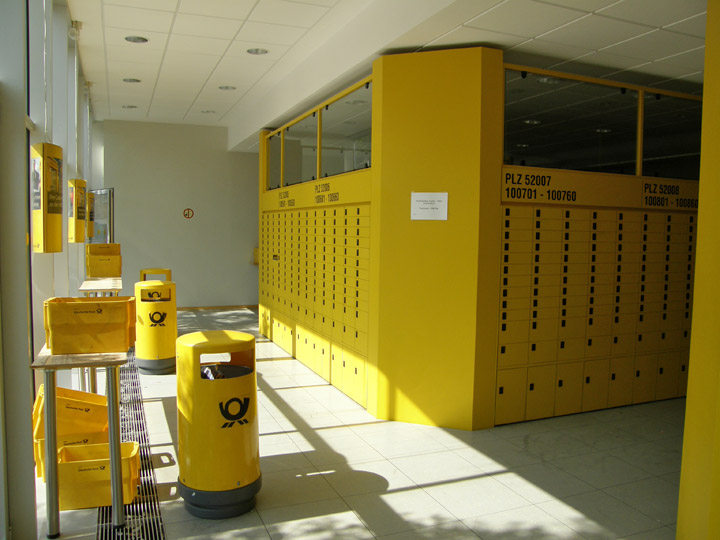 While the kings' palace does not exist any more, the church built by Charlemagne is still the main attraction of the city. Apart from the remains of its founder, it became the burial place of his successor Otto III. The cathedral of Aachen has been designated as a UNESCO World Heritage Site. 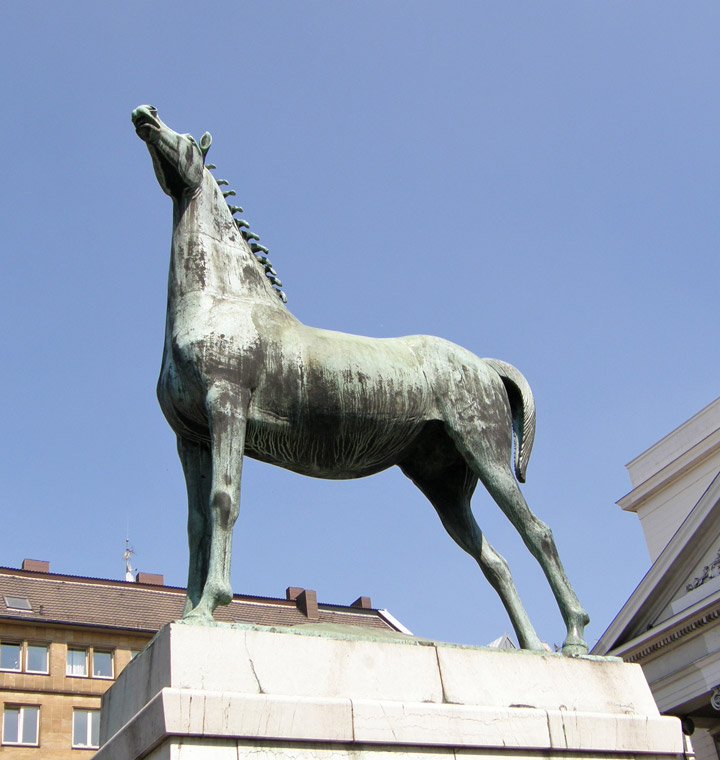 horse monument in front of the theater 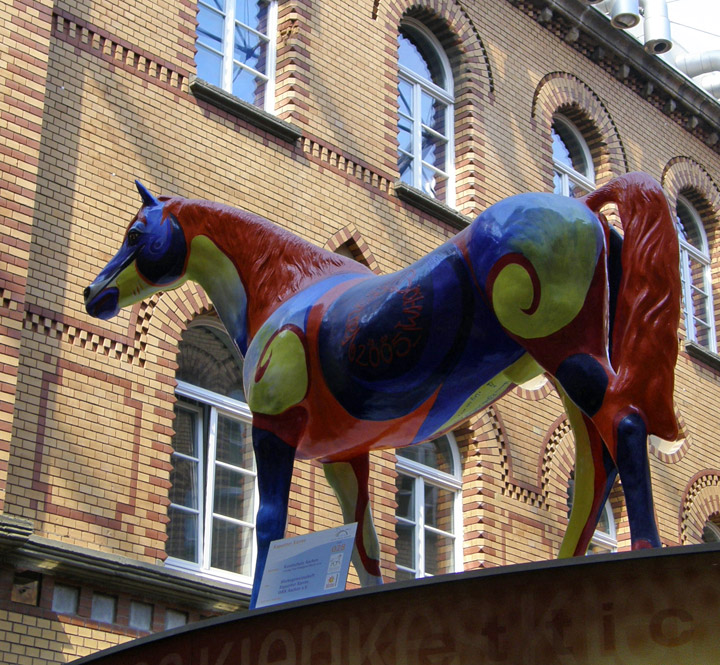 as part of the horse parade 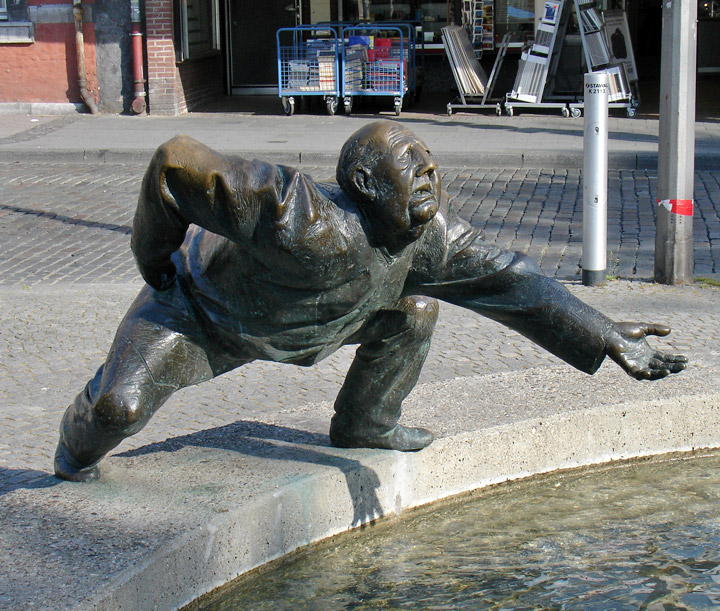 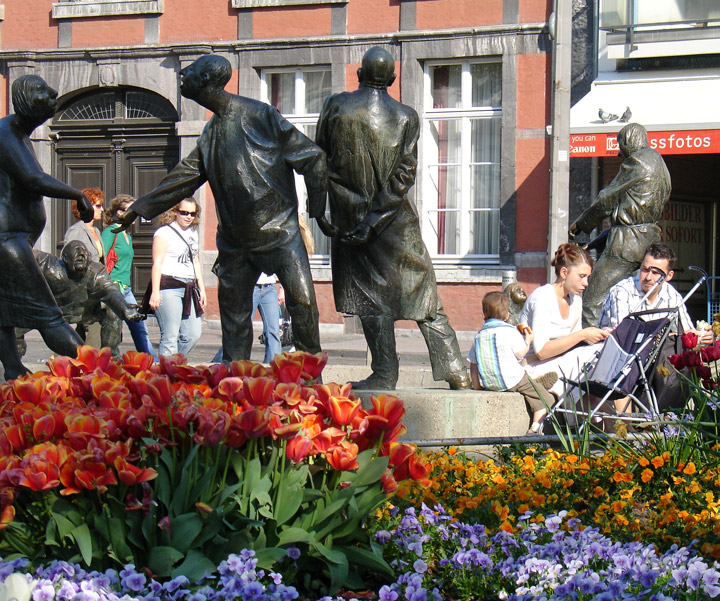 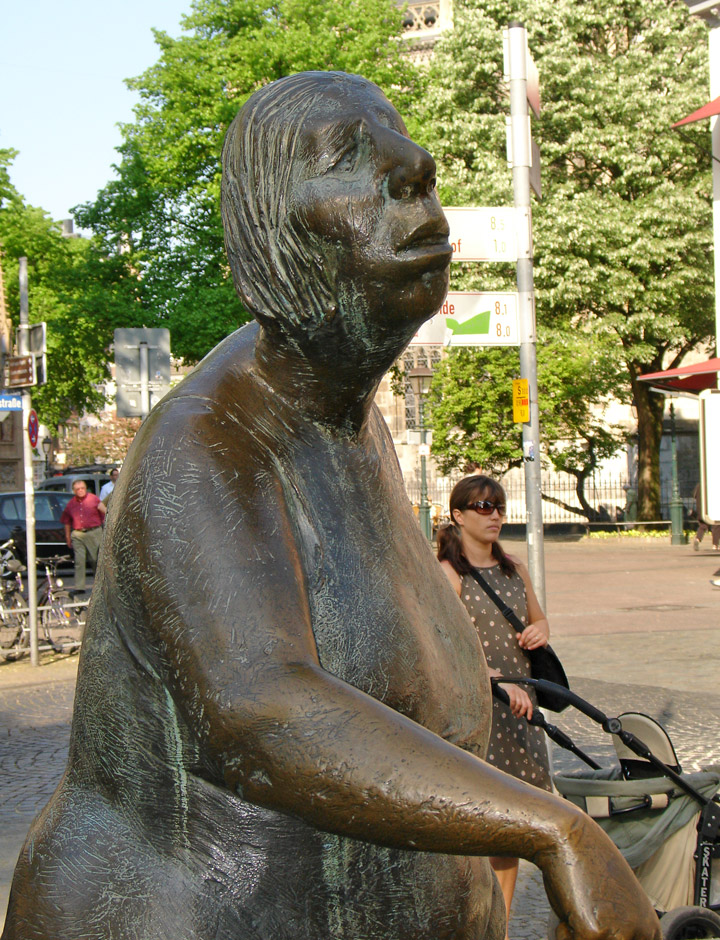 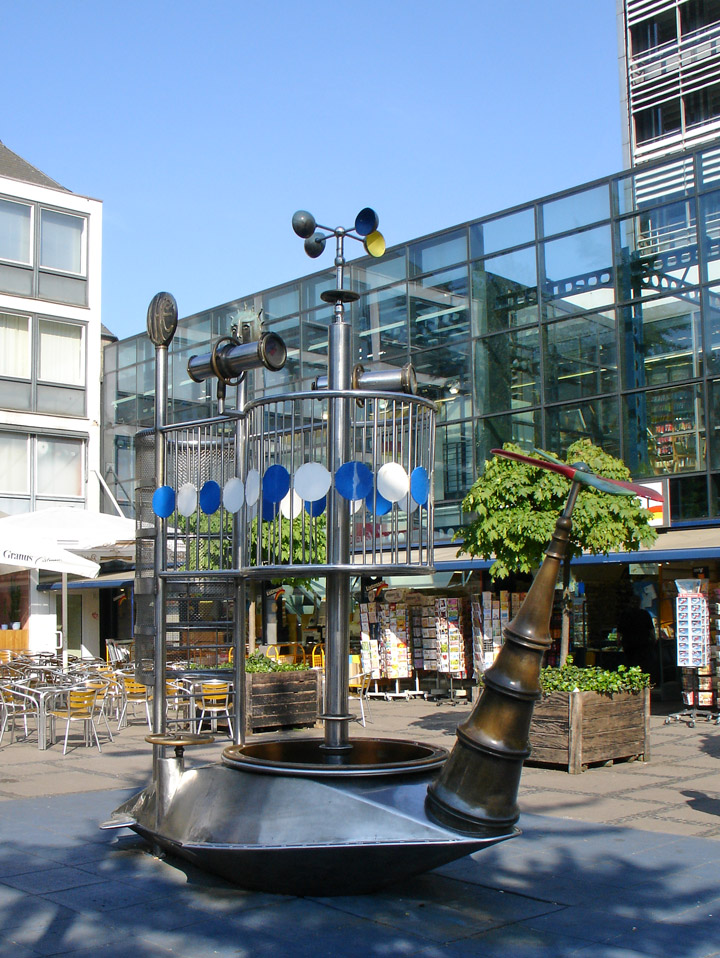 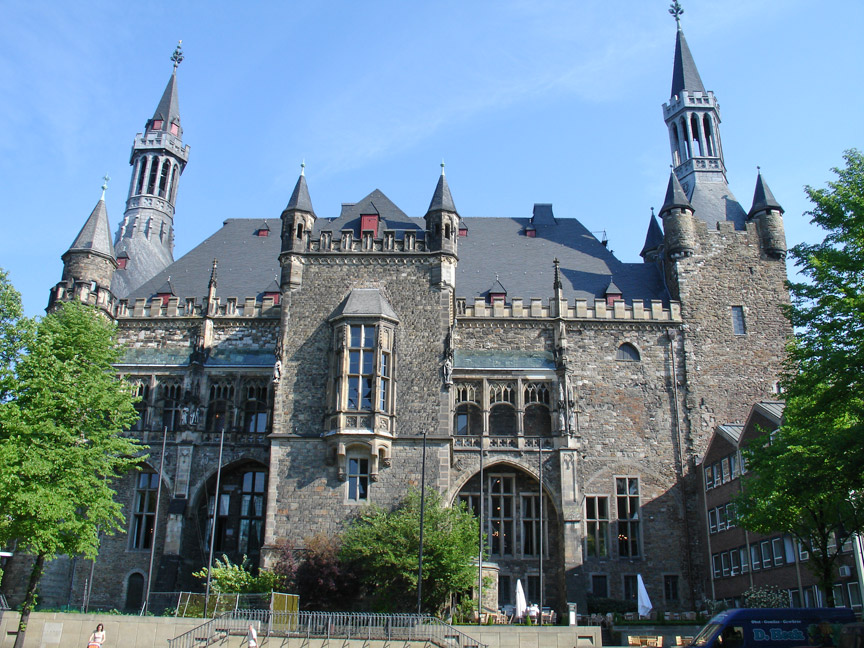 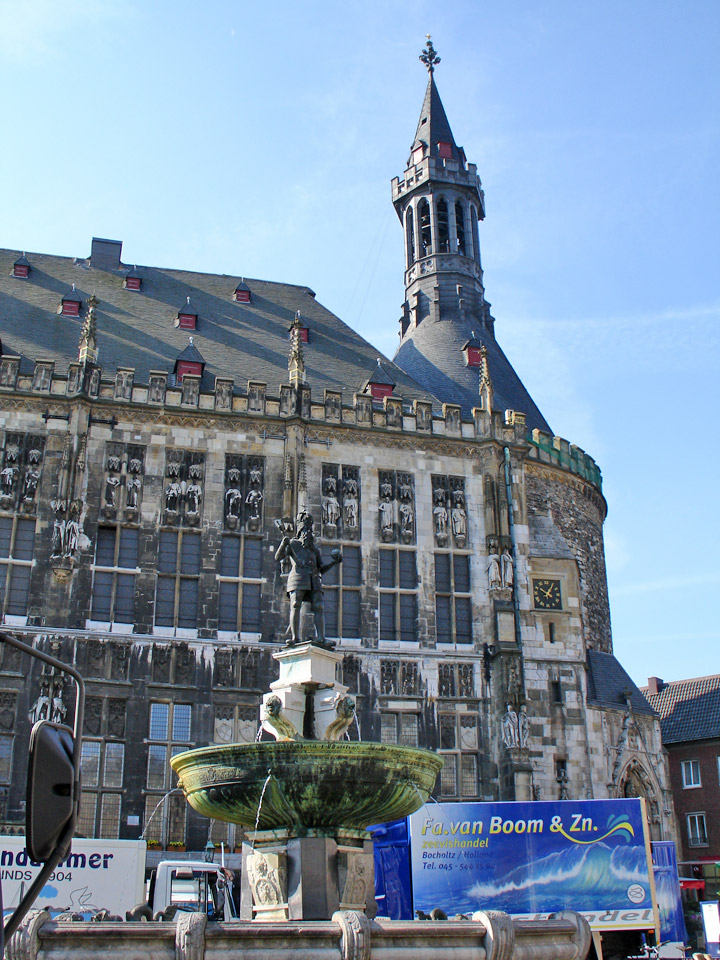 market behind the Rathaus 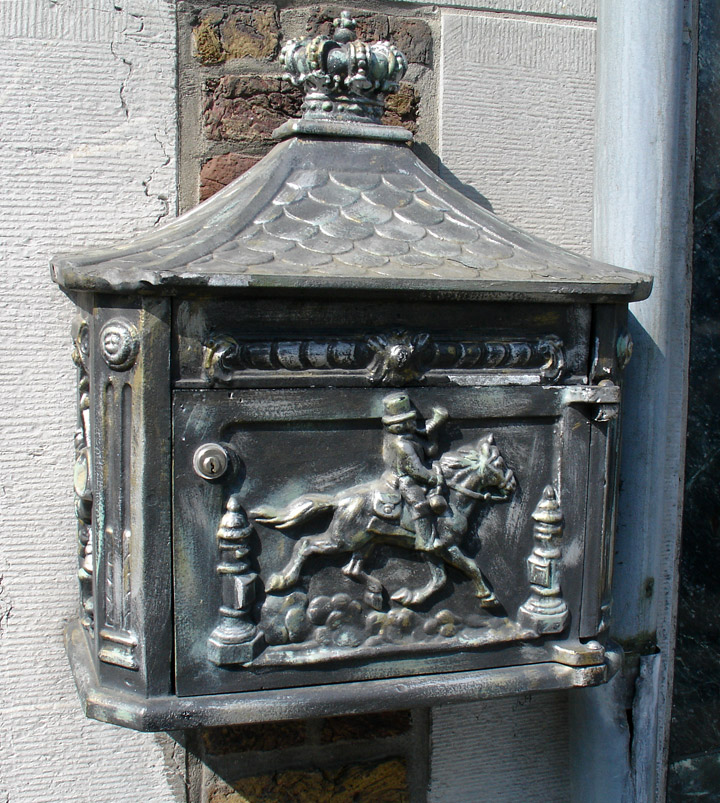