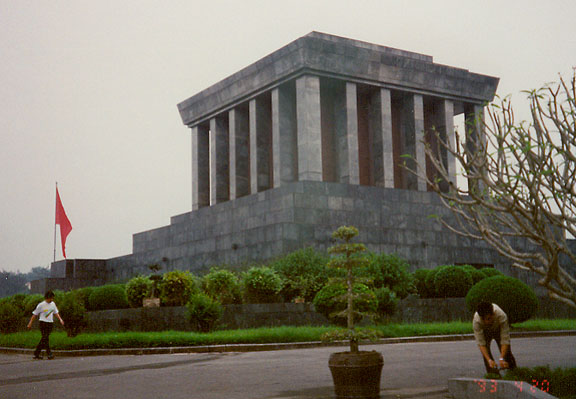 Hanoi, capital city of Vietnam, in the northern part of the country, about 140 km (about 85 mi) from the Gulf of Tonkin. The city is located on the west bank of the Red River, in the middle of the fertile river delta of the same name. Second only to Ho Chi Minh City (formerly called Saigon) in population and economic importance in Vietnam, Hanoi dominates the north and is the country's political center. 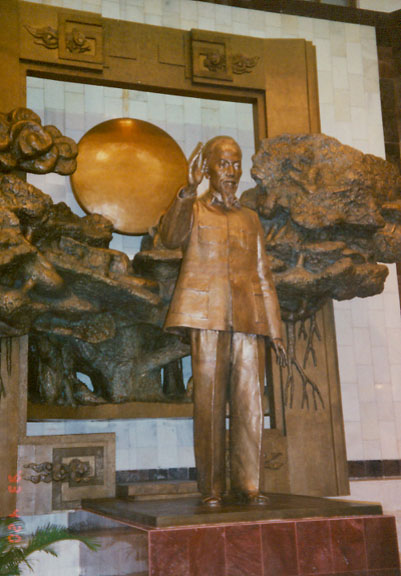 Metropolitan Hanoi had a population of 3,056,146 in 1989. Most residents are ethnic Vietnamese, and Vietnamese is the common language (see Austro-Asiatic Languages). Since 1875, foreigners living in northern Vietnam have been concentrated in Hanoi; there are now several thousand Asian and European diplomats and businesspeople living in the city. Since the 1980s, rapid and uncontrolled migration into Hanoi from other areas of Vietnam and the arrival of numerous foreigners has created severe housing problems. Economic and social problems have also developed as Hanoi has tried to absorb poor migrants who seek employment in the city. 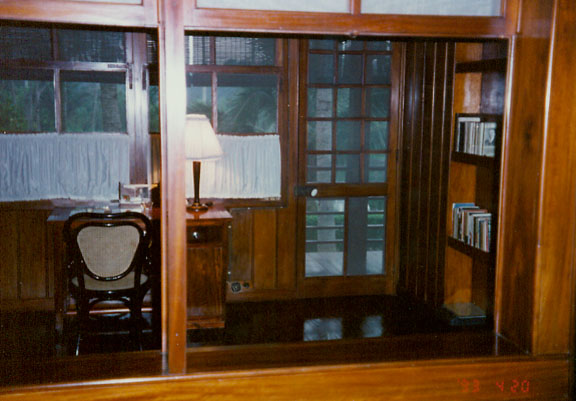 Hanoi is an important agricultural and manufacturing center. Rice has been cultivated in the area for more than 2000 years; vegetables are also grown nearby. Manufactures include machinery, processed food, chemicals, and textiles. Hanoi is the major transportation center for the north, with roads and railway lines providing links to all other major Vietnamese cities. The city's Noi Bai Airport is the country's northern hub for international air connections. Unlike most capital cities in Southeast Asia, Hanoi is not a significant international port. 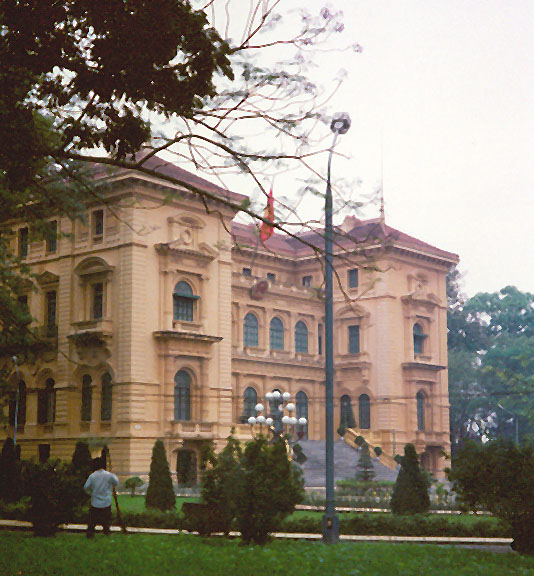 Metropolitan Hanoi covers an area of 2146 sq km (829 sq mi). The city proper is divided into four administrative sectors: Hoan Kiem, Ba Dinh, Dong Da, and Hai Ba Trung. Hoan Kiem, the oldest and most densely populated sector, is located on the bank of the Red River. This area is characterized by French colonial-style buildings and wide boulevards. Picturesque Hoan Kiem Lake is located here, and Turtle Pagoda stands on one of the lake's two islands. Northwest of Hoan Kiem is the Ba Dinh sector, where the Ho Chi Minh Mausoleum, the tomb of the 20th-century Vietnamese Communist leader Ho Chi Minh, is located. The National Assembly and Party Headquarters buildings and Tran Quoc Pagoda, are also located in Ba Dinh. South of Ba Dinh is Dong Da, the largest sector of metropolitan Hanoi, noted for its hospitals and schools. The Hai Ba Trung sector lies east of Dong Da and south of Hoan Kiem along the Red River bank. 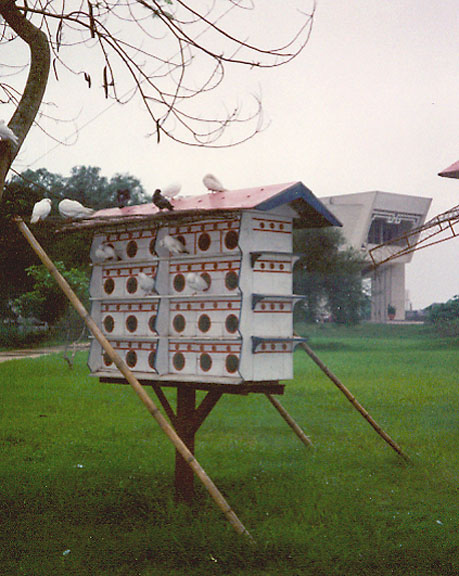 Hanoi has long been the center of education in the north. From 1442 to the late 19th century, the city was a major site of Vietnam's periodic civil service examinations, which tested knowledge of Confucianism, the foundation of the state's political system. Today the city is home to 19 universities and colleges, including the University of Hanoi (1956), the Hanoi University of Finance and Accounting (1963), and the Hanoi National Institute of Technology (1956). Hanoi's libraries and museums include the National Library of Vietnam (1919), the Army Museum (1959), and the Vietnam Museum of Fine Arts (1966). Numerous pagodas and several parks are located in the city. Thu Le Park, situated in the Ba Dinh sector, contains a small zoo. 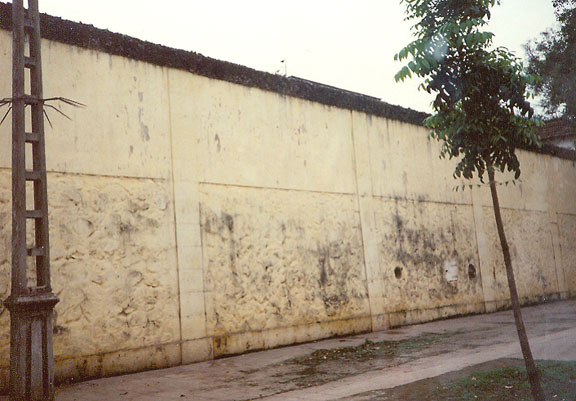 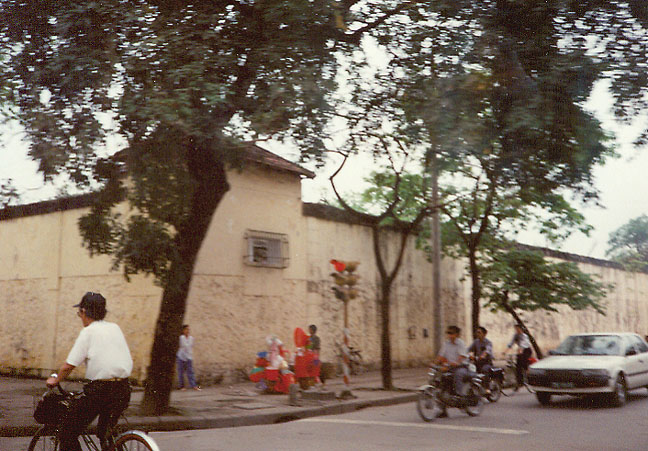 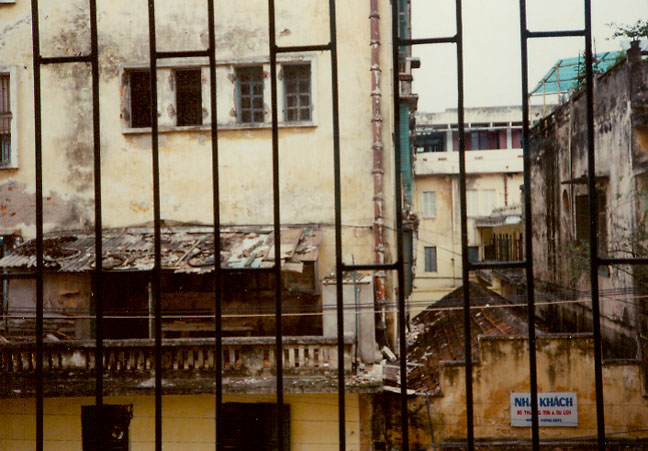 There are several major archaeological sites in metropolitan Hanoi indicating the prominence of this location in Vietnamese history. In 1010 AD Hanoi became the capital of a reestablished Vietnamese kingdom. After 1802 the royal capital was relocated from Hanoi to Hue and northern regional administration came under the control of a viceroy in the Citadel, located just west of what is now the Hoan Kiem sector. By the 1870s, a Chinese and Vietnamese merchant quarter occupied what is now the northern section of Hoan Kiem. At French insistence in 1874, administration of the city was split between the major area of Vietnamese control and a new French concession just to the south. In 1888 the French took control of the entire urban area and rebuilt the city. A large French quarter of government buildings, shops, and residences quickly emerged just south of the merchant quarter. The Citadel was obliterated, although the Cot Co, a masonry flag tower, remains. From the 1880s to World War II (1939-1945), Hanoi developed as a French colonial capital. 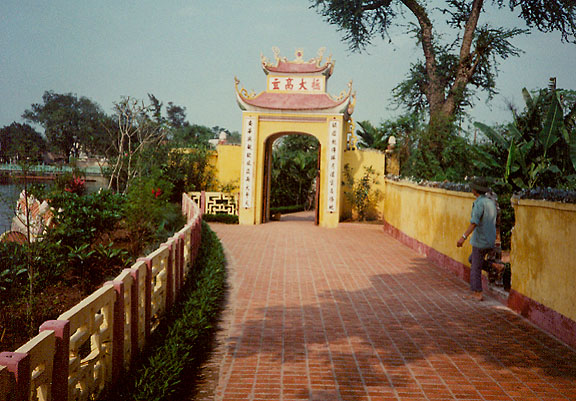 The 18th-century Ngoc Son Temple is located on a small island of picturesque
Hoan Kiem Lake, in Hanoi, Vietnam. The island is accessible by a wooden bridge.
One of many lakes within Hanoi, Hoan Kiem is surrounded by a public park. 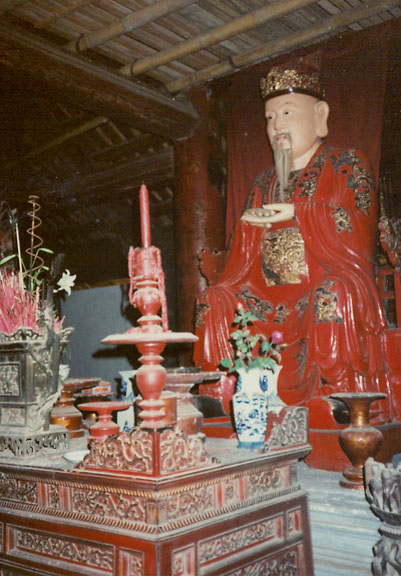 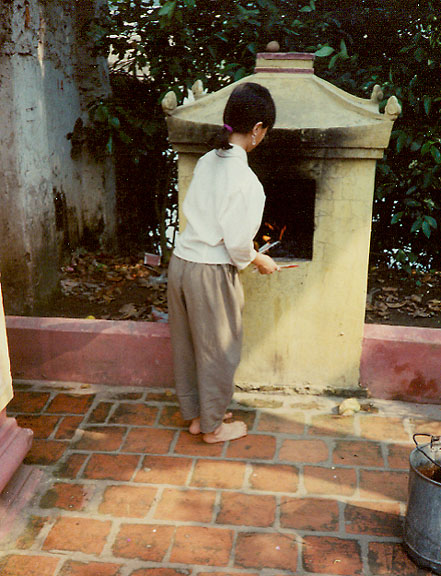 worshiper burning money as an offering 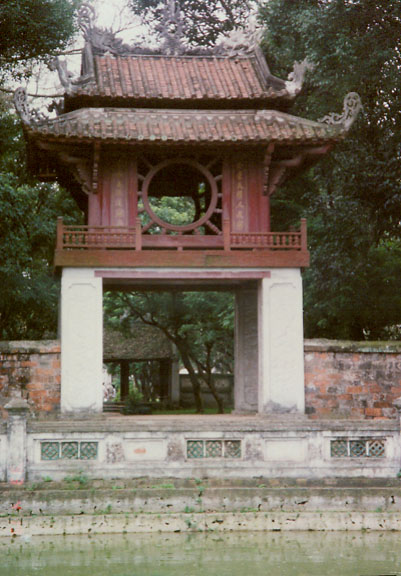 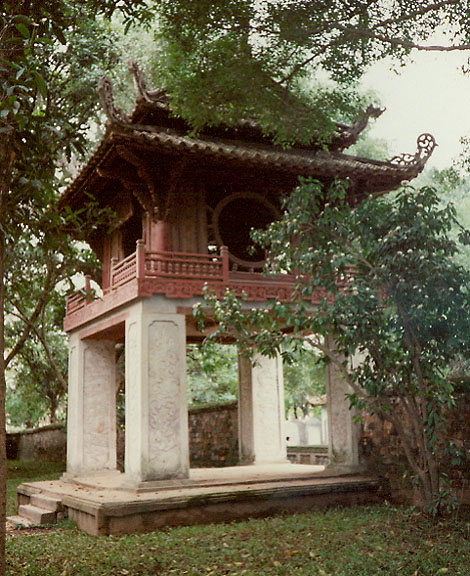 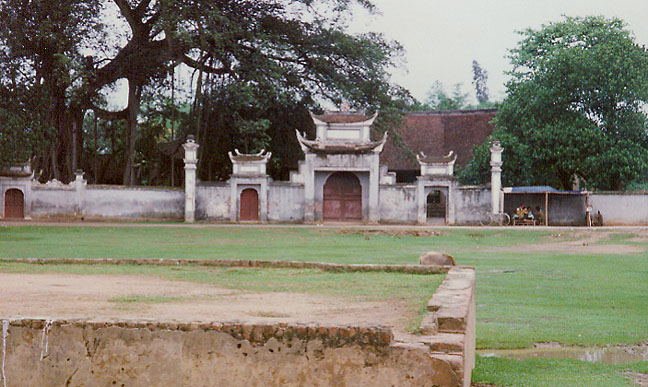 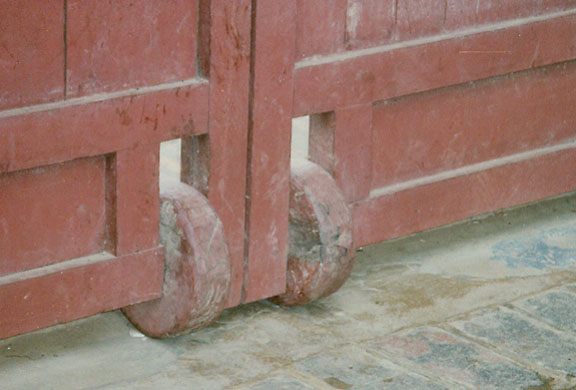 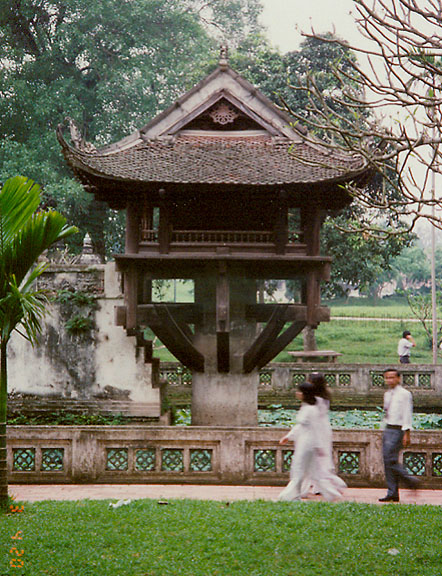 strolling thru the park

Hanoi's population has grown substantially, although not steadily, since World War II. While not badly damaged during the Japanese invasion of 1940, the city was occupied by Chinese troops at the end of the war and inundated by starving refugees. At the end of the war, in 1945, Hanoi was the center of the August Revolution, a popular uprising for independence by the Viet Minh, a coalition of Vietnamese Communists and nationalists. The Viet Minh declared the Democratic Republic of Vietnam (DRV), with Hanoi as its capital, but France did not recognize Vietnamese independence. In 1946 France began fighting the Viet Minh to regain control of Vietnam in a conflict known as the First Indochina War (1946-1954). The French regained military control over the Red River Delta in 1946. Fighting in Hanoi ended in 1947, but the Viet Minh continued to fight the French in other areas of Vietnam. The urban population may then have been only 12,000, a dramatic drop from 1943, when the population was about 120,000. Migrants and refugees soon moved into the area, however, and by 1954 metropolitan Hanoi's population had grown to more than 400,000.

restaurant on the lake

In 1954 negotiations were held to end the war. As a compromise, both sides agreed to a temporary partition of the country, with the Viet Minh in the north. Hanoi developed as the political, industrial, and cultural capital of North Vietnam. During the Vietnam War, which broke out in 1959 after Vietnam was not reunified, parts of Hanoi were bombed heavily. About one-third to one-half of Hanoi’s population—which reached about 750,000 in 1966—were forced to relocate as a result of the bombing. Recovery and growth were followed by another period of bombing and mass evacuation from 1972 to 1973. Still, by 1974 the population of the metropolitan area had reached about 1.3 million, including about 700,000 in the inner city. In 1976, following the end of the war, North Vietnam and South Vietnam were reunified as the Socialist Republic of Vietnam, with Hanoi as the capital. Hanoi has recently experienced a period of particularly rapid urbanization. This urbanization is the result of recent liberalization of the rules governing economic activity and labor markets in Vietnam combined with rural poverty, which has sent many people to look for work in the city. 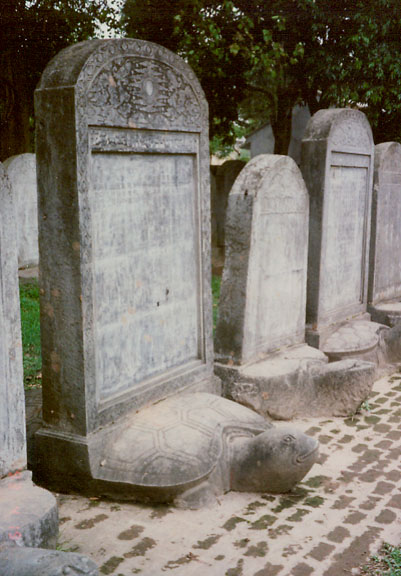 tombstone
(resting on the turtle)