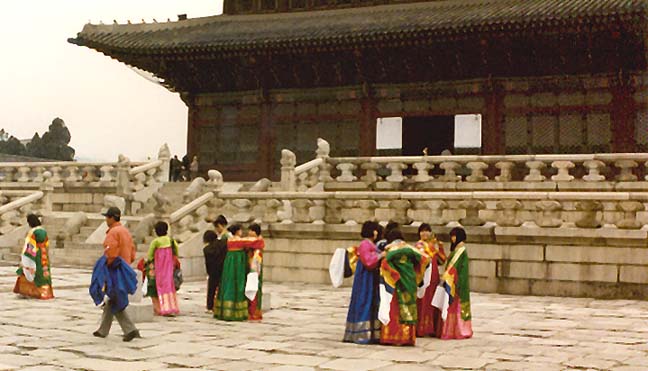 Seoul (Korean Sŏul), capital of South Korea (Republic of Korea), located in the northwestern part of the country on the Han River. Seoul is 31 km (19 mi) from the Yellow Sea port city of Inch’ŏn, and about 40 km (25 mi) from the border with North Korea (Democratic People’s Republic of Korea). It is the largest city and chief commercial, manufacturing, administrative, and cultural center of South Korea. The word Seoul is a Korean term meaning capital city. Originally known as Hansŏng, Seoul was renamed Kyŏngsŏng in 1911. The city has officially been called Seoul since 1945, when Korea, then a single country, was liberated from 35 years of Japanese colonial rule. 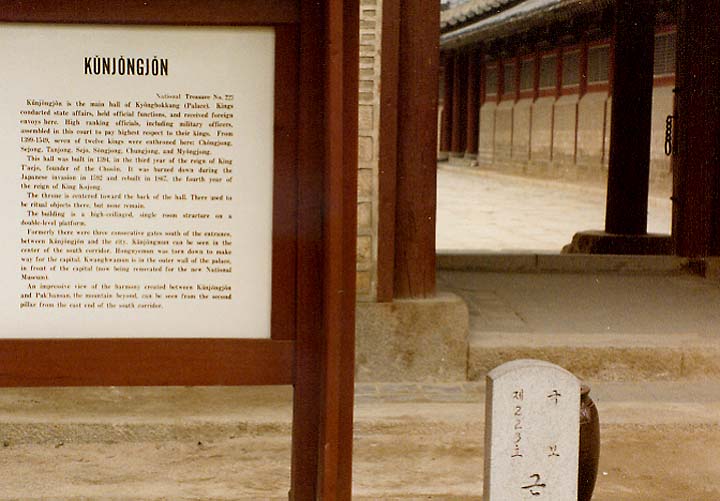 Kunjongjon
(main hall of the palace)

Seoul has a continental climate with four distinct seasons, including hot, humid summers and cold, relatively dry winters. Average high temperatures are 1° C (33° F) in January and 29° C (83° F) in July. Seoul receives an average annual precipitation of 1,370 mm (54 in), of which 70 percent usually falls between July and September. 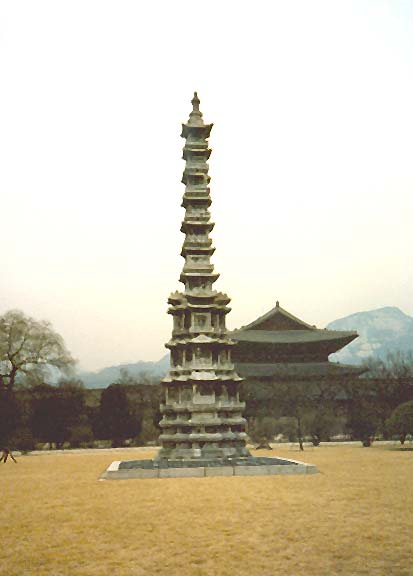 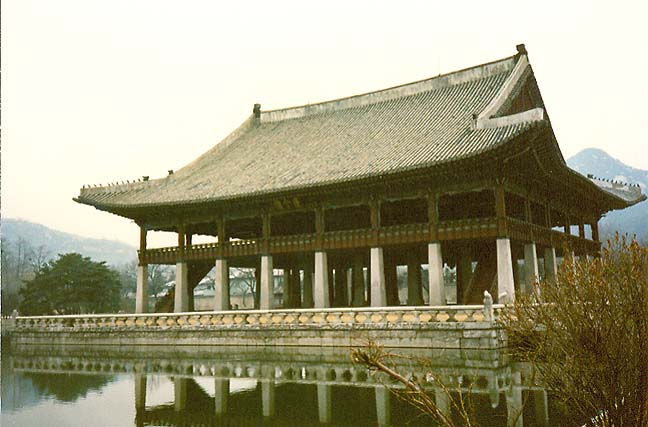 At the beginning of the Chosŏn (Yi) dynasty in 1392, Seoul was built surrounded by a fortified wall with four main gates and four secondary gates: a main gate at each of the cardinal points of the compass and a secondary gate between. Little of the original stone wall still exists, and only two of the main gates and one of the secondary gates remain standing. There is also a bell tower in Namsan Park that contains a large bronze bell cast in 1468. 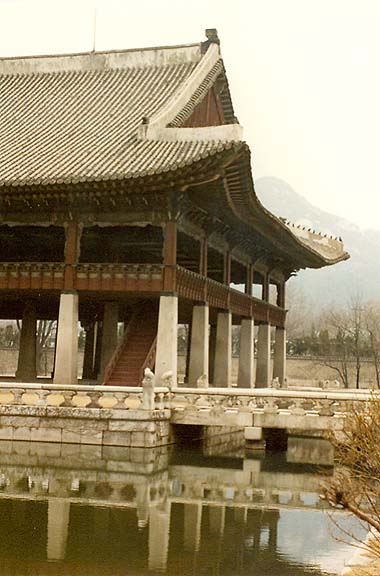 Seoul is divided by the Han River, which flows from east to west toward the Yellow Sea. The city consists administratively of 22 gu (wards), which are subdivided into 526 dong (precincts). Business and commercial centers are located in the downtown area and, increasingly, in the area south of the Han River. Factories are concentrated in the western part of the city, especially the district of Yŏngdŭnp’o. Poorer residential areas are mostly in the eastern part of the city. The north side of the city is mountainous and has many parks, as well as the presidential palace known as Ch’ŏingwa dae (Blue House). The two largest outdoor markets are located near the South Gate (Namdaemun) and East Gate (Dongdaemun). Myŏngdong, sometimes called the "Ginza" of Seoul after the high-fashion district of Tokyo, is the center of women’s fashion and shopping in downtown Seoul and also the site of South Korea’s largest Roman Catholic cathedral. From the 1960s through the mid-1990s the area south of the Han River (known as Kangnam or "South of the River" in Korean) saw a boom in the construction of shopping malls and apartments for the upper-middle class. 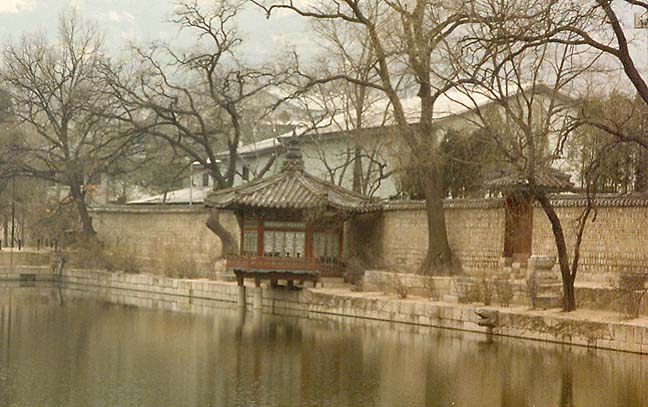 Architectural monuments include the Independence Arch, built near the site of the old West Gate of the city in 1896. A statue of Admiral Yi Sunsin, who defended Korea against the Japanese invasions of 1592 to 1597, stands on an island at the center of Sejongno, the main downtown thoroughfare. A statue of King Sejong, who invented the Korean alphabet Han’gŭl in 1446, is located in Tŏksu Palace. 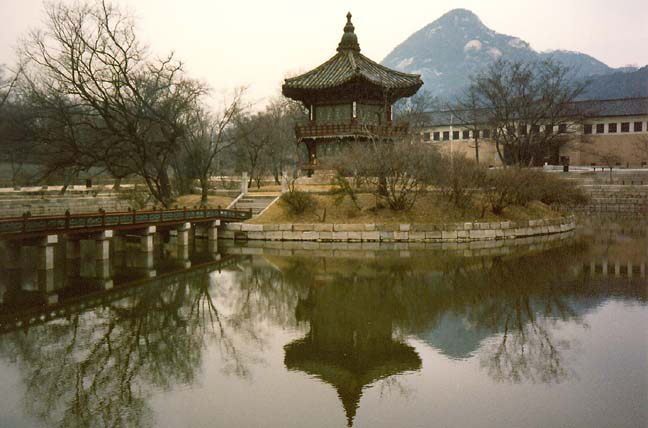 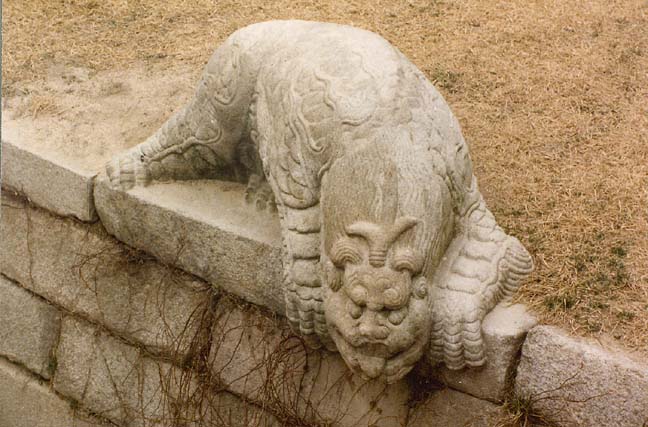 Seoul contains a number of buildings from the Chosŏn dynasty (1392-1910), including four major palaces: Ch’angdŏk Palace, Ch’anggonggung Palace, Kyŏngbok Palace, and Tŏksu Palace. Chongmyo Shrine houses the Chosŏn dynasty royal ancestral tablets, and Confucian memorial services for the royal family are held at Chongmyo each May. 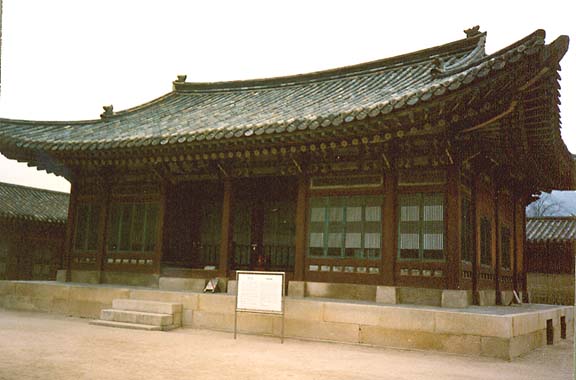 another building in the Palace complex 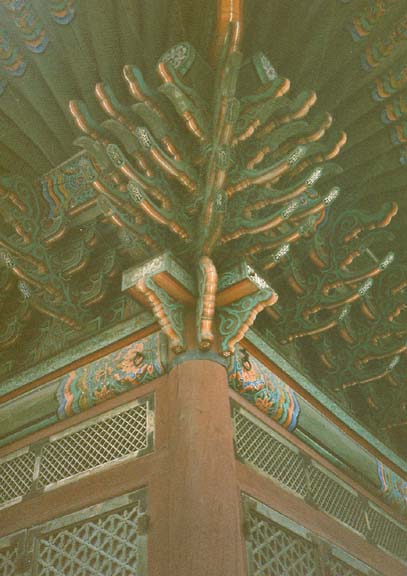 Important civic buildings include Seoul’s city hall and supreme court, both in the central part of the city, and the National Assembly building on Youido Island in the Han River to the southwest. An imposing stone structure was built in front of Kyŏngbok Palace in 1926 by the Japanese to house the colonial government general. It was occupied by the South Korean government after 1945 and in 1985 it became the National Museum. On August 15, 1995, the 50th anniversary of liberation from Japan, the South Korean government began the dismantling of the building in order to eliminate one of the most visible remnants of Japanese colonial rule. 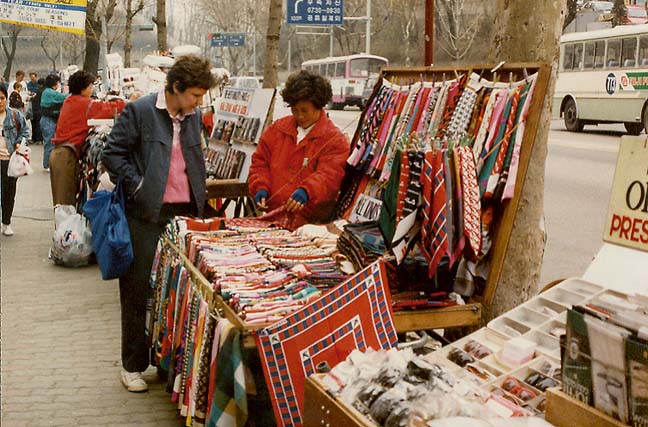 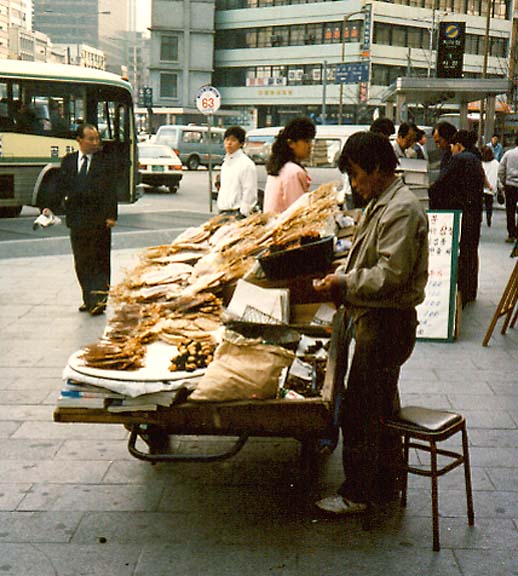 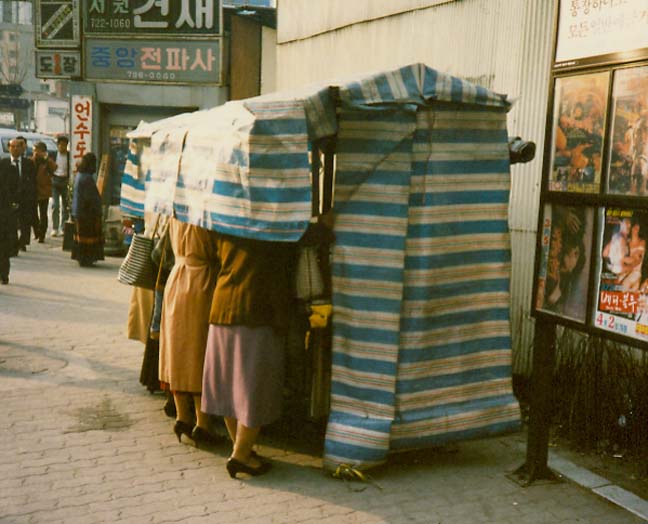 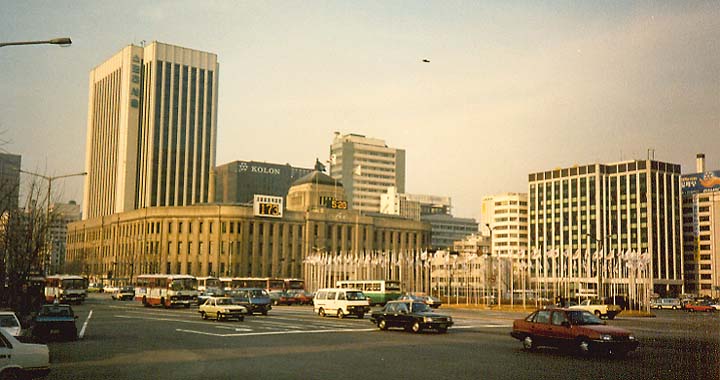