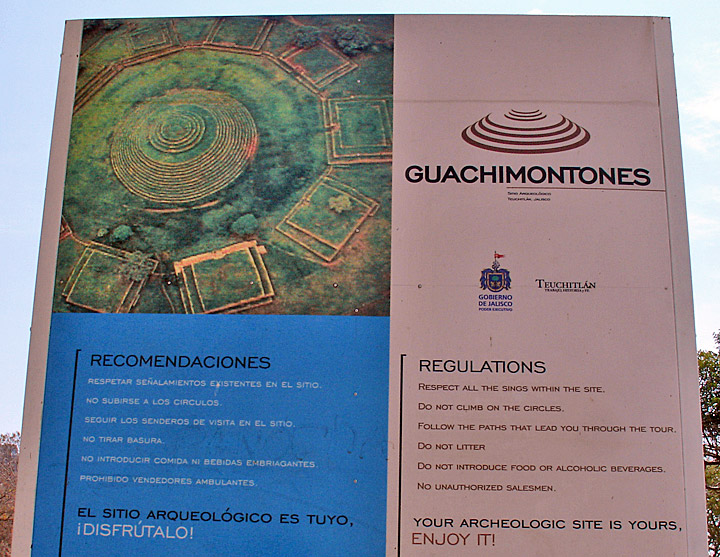 Teuchitlán represents one of the first settlement systems with a civilized lifestyle in this area. The circular structures, over two thousand years old are found in the midst of the central valleys of Jalisco. 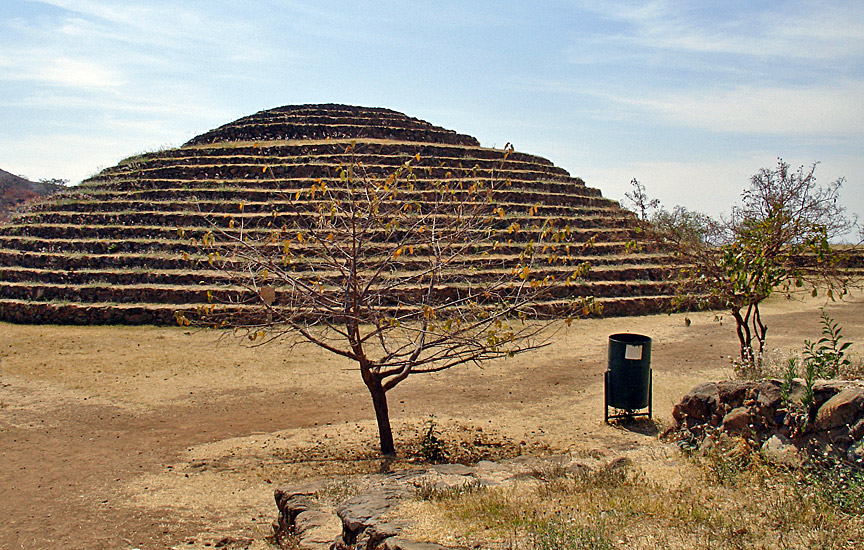 the central round pyramid 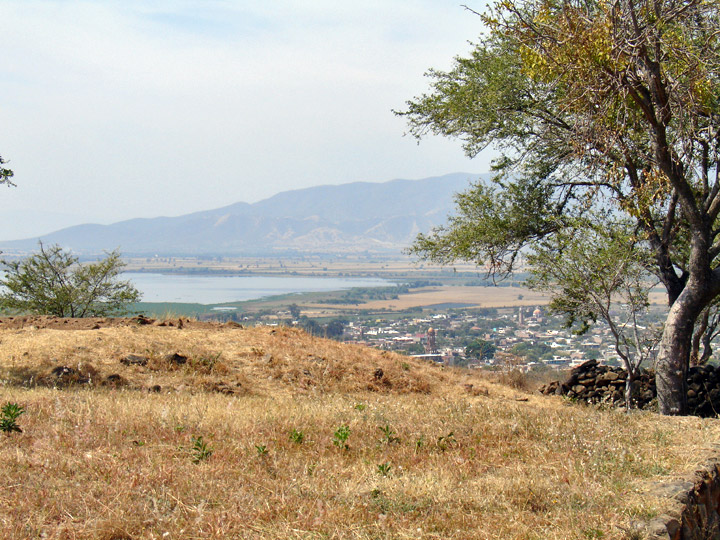 looking toward the town of Teuchitlan 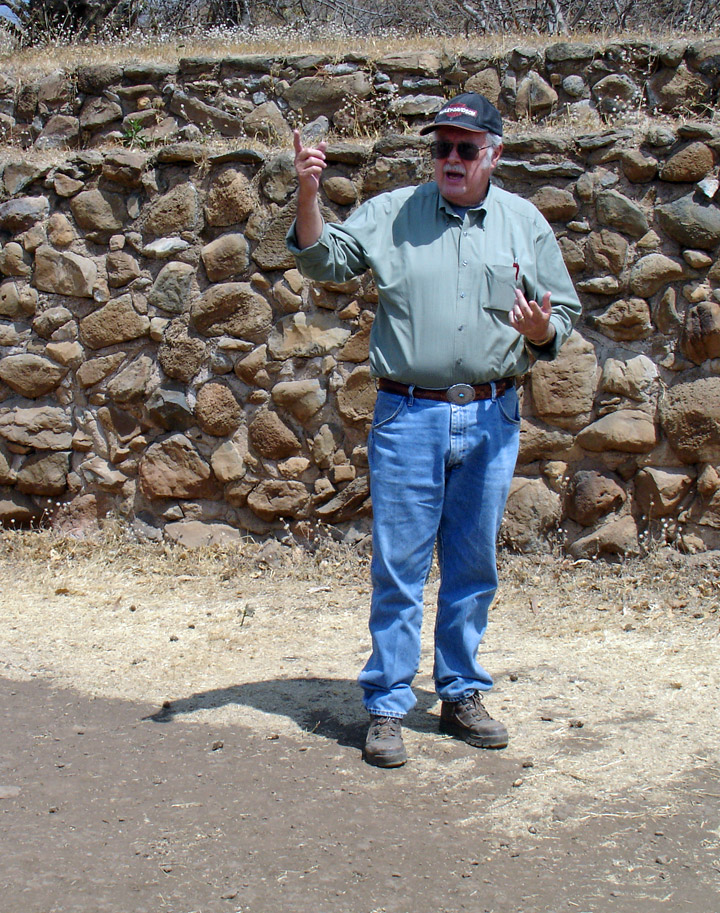 Dr. Phil C. Weigand of the Departmento de Antropología of the Colegio de Michoacán in Mexico has theorized that the Caxcan Indians probably originated in the Chalchihuites area of northwestern Zacatecas. After the collapse of the Chalchihuites culture around 900 to 1000 A.D., Dr. Weigand believes that "the Caxcanes began a prolonged period of southern expansion" into parts of Jalisco. 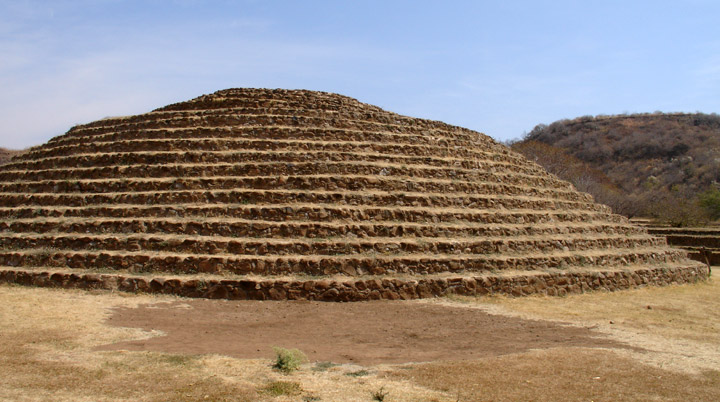 Dr. Weigand has further noted that - at the time of the Spanish contact - the Cazcan "were probably organized into small conquest states." He also states that the "overriding theme of their history seems to have been a steady expansion carried by warfare, to the south." 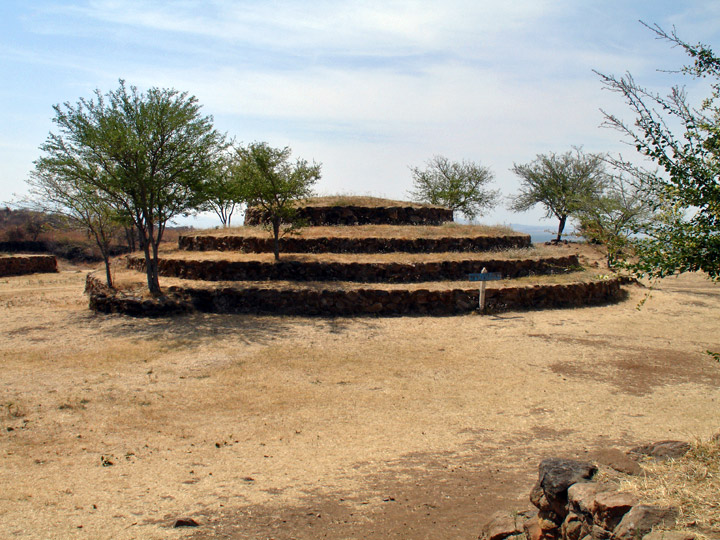 side smaller round pyramid

Dr. Weigand also observed that the Caxcanes "appear to have been organized into highly competitive, expansion states. These states possessed well-developed social hierarchies, monumental architecture, and military brotherhoods." The Caxcanes are believed to have built their primary peñoles (fortifications) and religious centers at Juchípila, Teúl, Teocaltiche, Tlatenango, Nochistlán, Jalpa and El Chique. 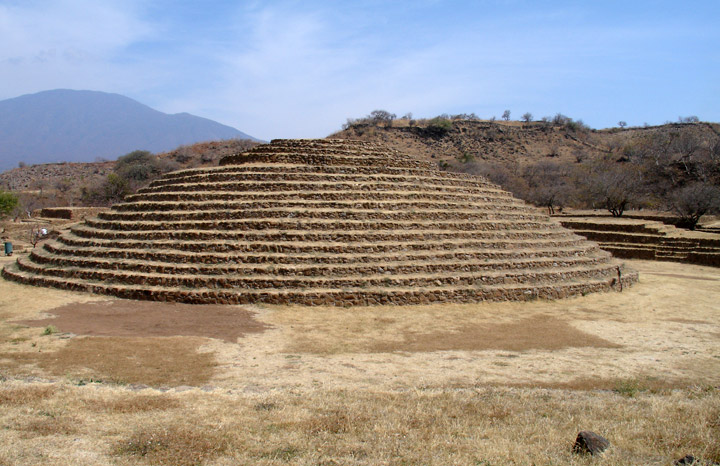 Weigand's work has been focused on the lake basins in the center of the state, including the basins of the Cienega La Vega and the Laguna de Magdalena in the Tequila valleys, Lake Chapala, and Lake Sayula. By far most of this work has been located in the Tequila valleys, and began with a desire to document the settlement pattern and cultural ecology of the society that built the shaft tombs of the region. The lake basins, with their wide array of natural resources, have been the center of gravity for the most elaborate shaft tombs and offering assemblages. Yet Isabel Kelly's surveys in the 1930s found remarkably little in the way of settlement (her overwhelming focus on pottery to the exclusion of other materials is evident in her reports), and Stanley Long's surveys in the 1960s were left unpublished after his untimely death. 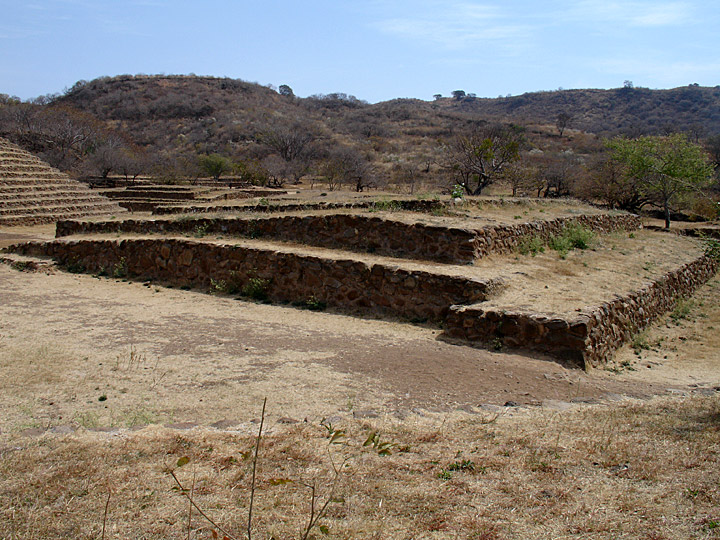 Weigand has carried out mostly survey over the years, with minor surface collections and still more minor excavations. On the other hand, his work has included extensive documentation of profiles of looters' trenches, more controversial interviews of looters, and attempts to recontextualize this information. This work has been carried out with the aid of various fieldworkers, but most later decided to leave the region to continue their careers elsewhere. 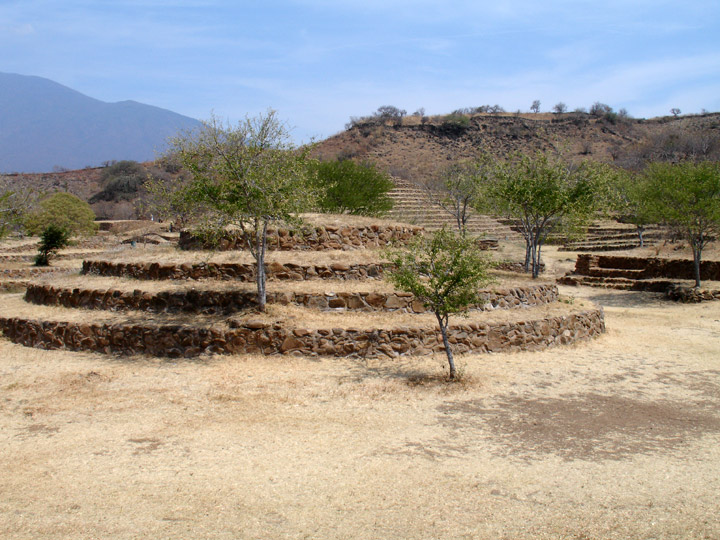 The primary result of the project has been to document that a society, more complex than that assumed in earlier studies, had existed in these lake basins during the Formative and Classic periods. Evidence for this is to be found in the presence of complex, circular monumental architecture referred to as guachimontones, as well as in the remains of mining operations and possible agricultural fields. 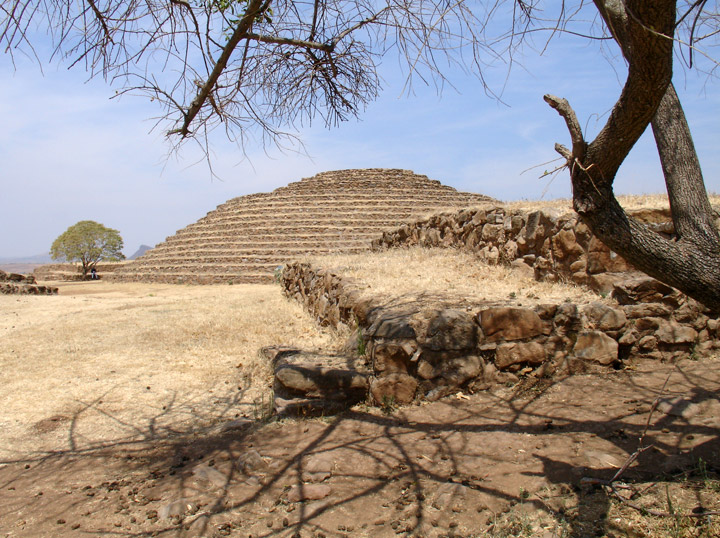 The photo shows the central collection of public architecture, but smaller circles and residential architecture are continuously and closely distributed over a large area beyond this. 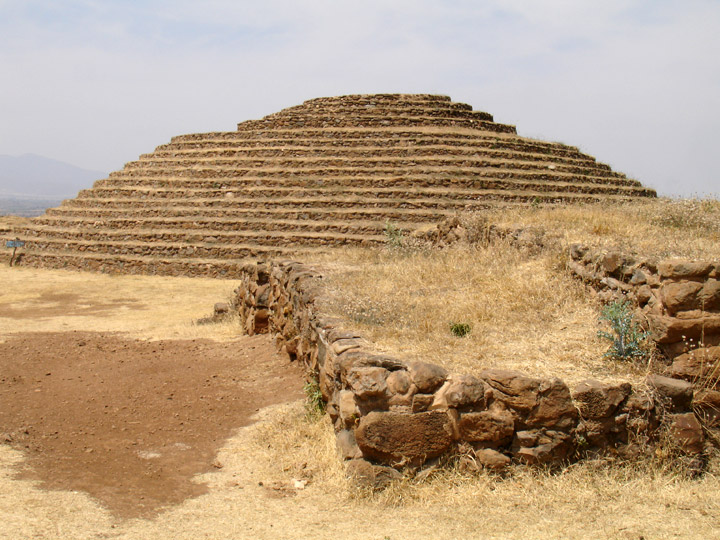 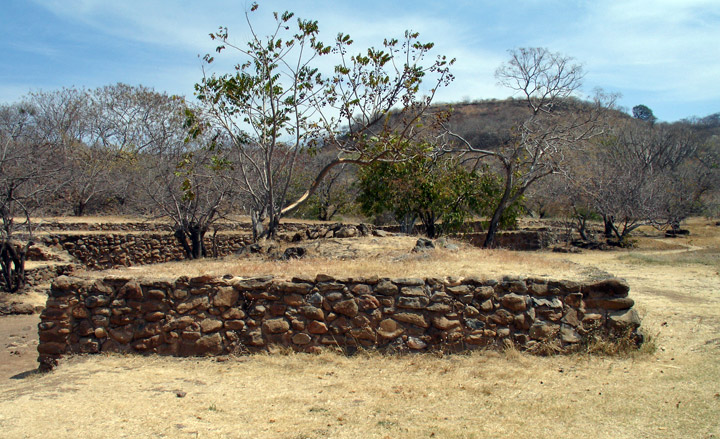 side platform upon which wooden structures had been erected 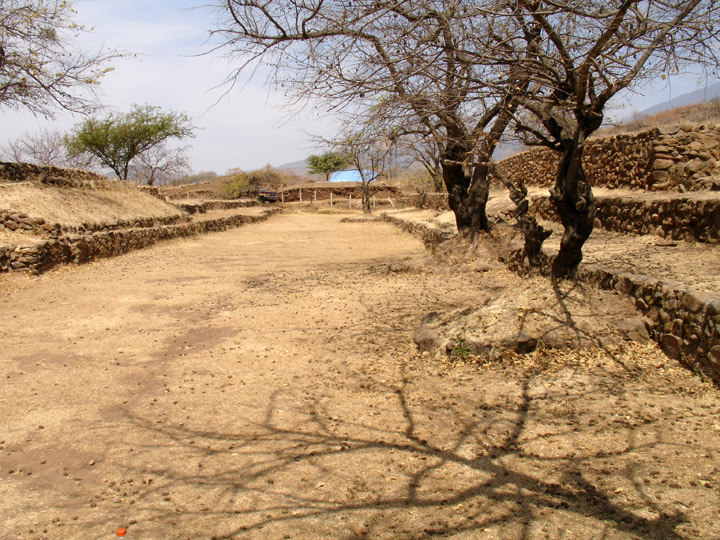 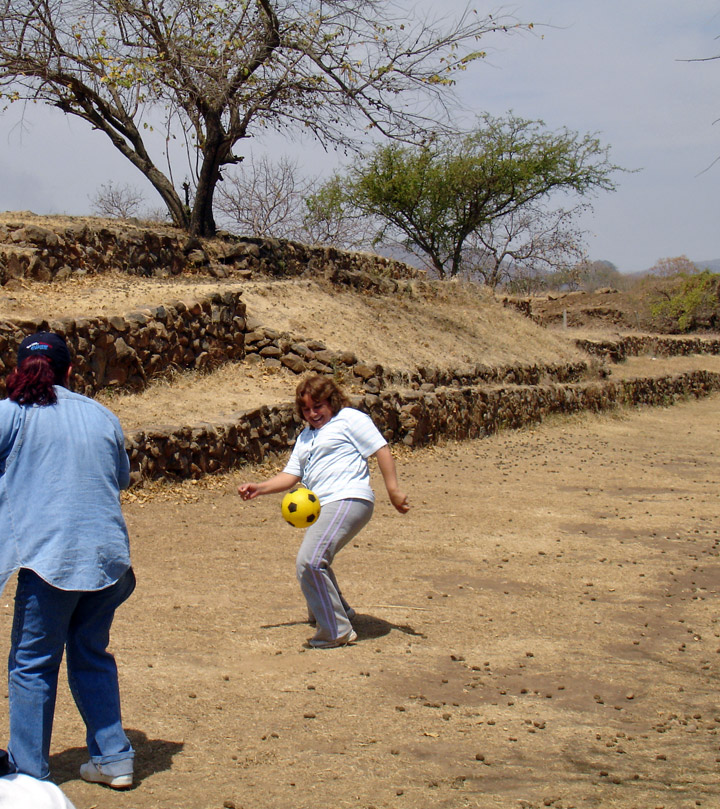 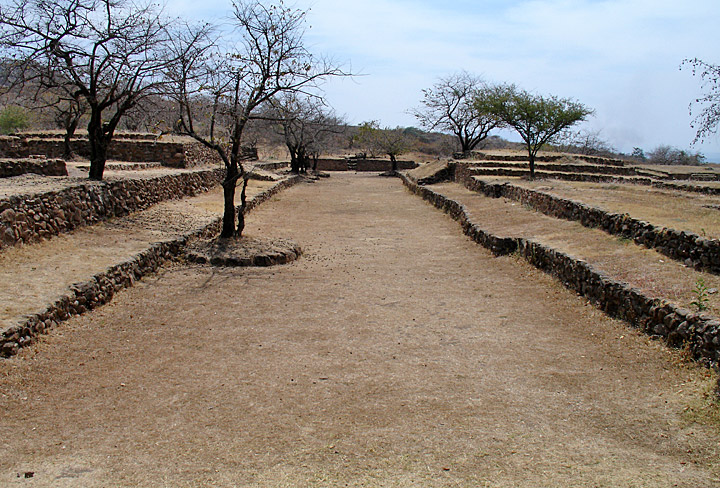 ball court from the other end 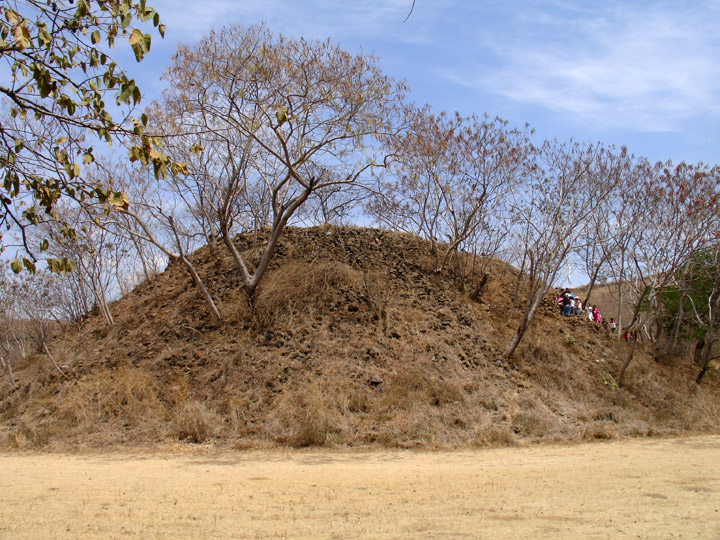 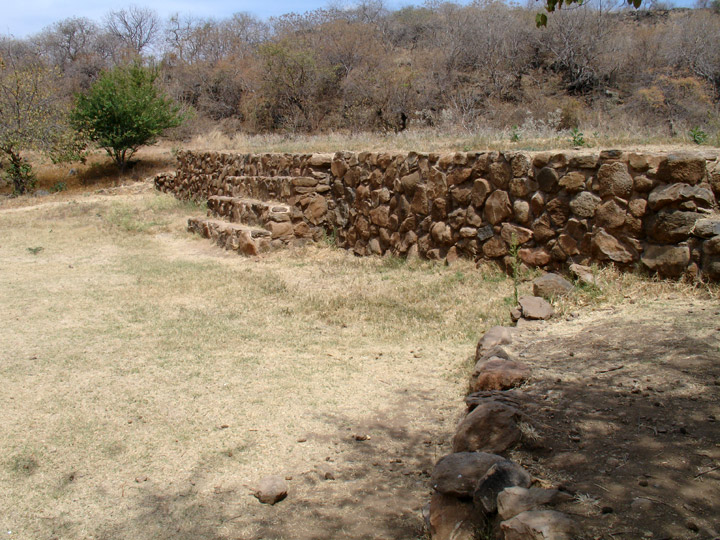 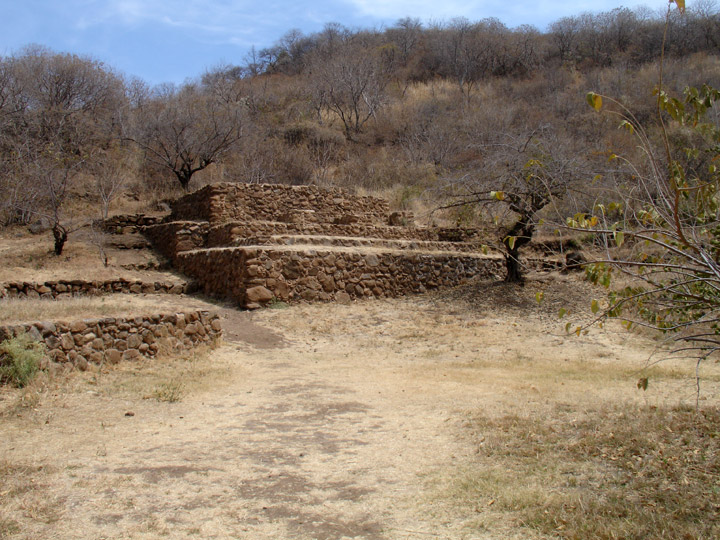 platform built into the hill 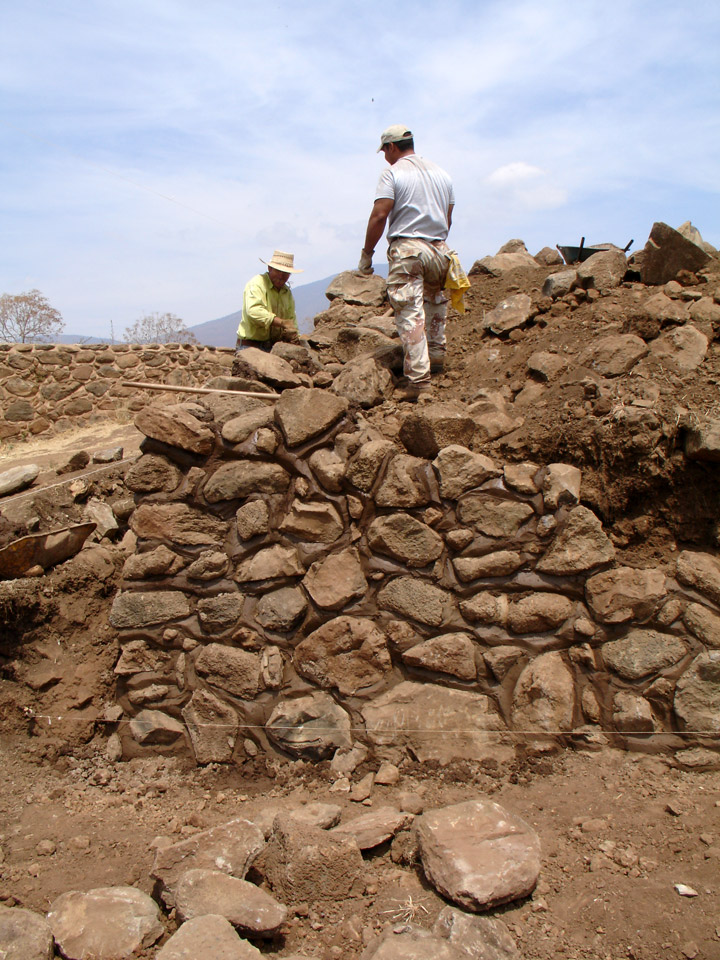 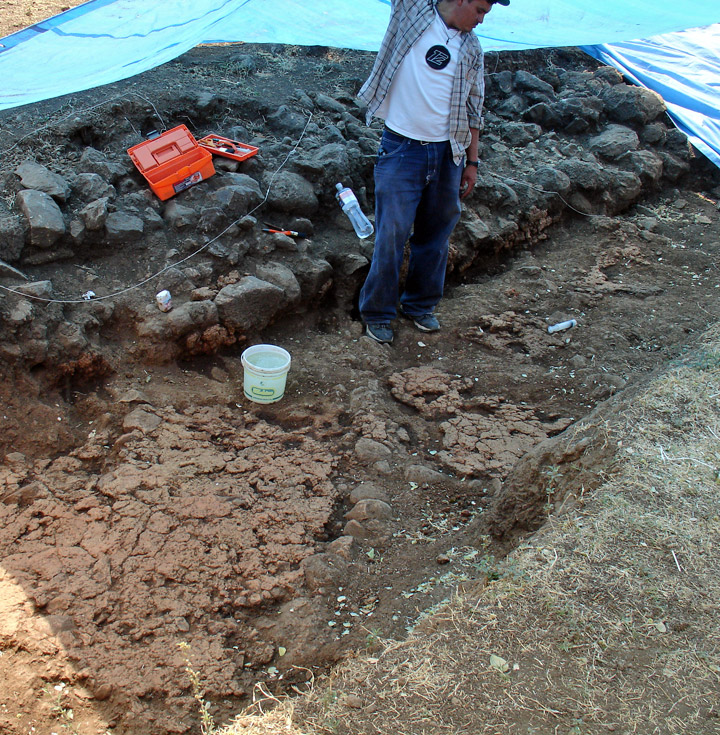 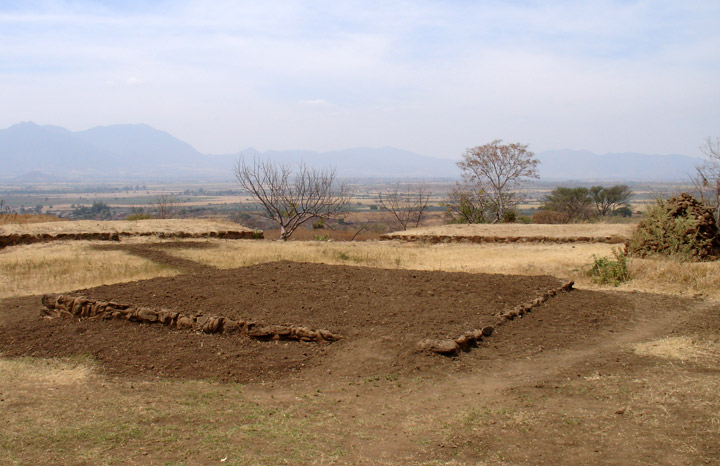 platform high above the complex