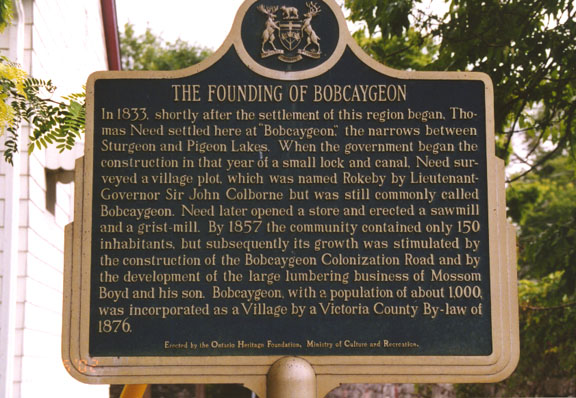 The origin of the name Bobcaygeon can be traced back to as early as 1615, when Champlain traveled through this area. In his diary, he noted that the forests around this area were the finest he had observed in all his travels, and described it as ‘beaubocage’ (beaubeautiful, bocage=hedged farmland). Two centuries later, the first white settlers arrived to hear the Mississauga Indians calling it ‘Bobcajewonunk’, their version of the name Champlain had used. This word developed into meaning “narrow place between two rocks, where water rushes through”. It aptly described this site before a wooden dam and lock were built, altering though not erasing its beauty. Built on three islands where Sturgeon Lake flows into Pigeon Lake, Bobcaygeon is divided by the Trent Canal, and flanked on either side by the Big Bob and Little Bob rivers, with 7 bridges joining everything together. The original lock at Bobcaygeon was the first lock to be built on the Trent-Severn Waterway. The wooden lock was initiated by Lieutenant Governor Sir John Colborne in 1832, and financed by the provincial government. In 1833, shortly after the settlement of the region began, Thomas Need (Author of Six Years in the Bush, or Extracts from the Journal of a Settler in Upper Canada 1832-1838) settled here at Bobcaygeon, the narrows between Sturgeon and Pigeon Lakes. He later opened a store and erected a sawmill and a gristmill. Where we are tied up for the night is just below where this first gristmill was located. The sawmill and lumberyard were across the canal on the lower end of Centre Island. 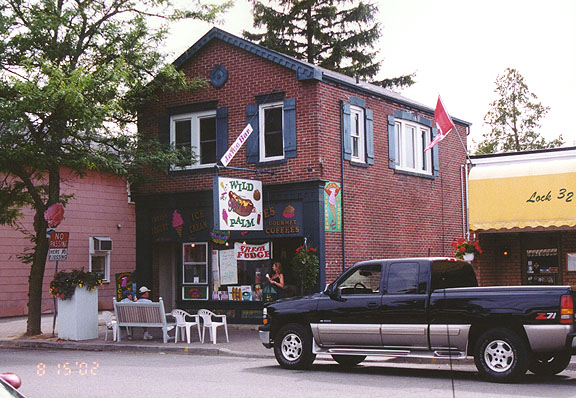 Need later sold his mills to Mossum Boyd in 1849, which is when Bobcaygeon is said to have been founded. As well as being known as the founding father of Bobcaygeon, Boyd would later be known as the ‘Lumber King of the Trent Valley’.
In addition to his lumber empire, Boyd also founded the Trent Valley Navigation Company (1883 — 1915), which operated freight and passenger steamers between Lindsay, Coboconk, Sturgeon Point, Fenelon Falls, and Bobcaygeon. His ships
included the Esturion, Manita, and the Ogemah. During this period, Boyd brought much tourist business to the Kawartha Lakes region, through extensive advertising in newspapers and brochures. A 5800 word essay prepared for publication in 1902 had the ambitious title — “Play-Ground of the Continent: Kawartha Lakes means Bright Water and Happy Lands, Where Nature Lies in Sweet Abandonment and Laughing Waters Kiss a Hundred Shores.”  Boyd’s extensive home and gardens could be seen behind a stonewall, across the road from our dock. Although there were plans to restore and convert the house into condominiums, fire regulations made it cost prohibitive. By 1857 the community contained only 150 inhabitants but subsequently its growth was stimulated by the construction of the Bobcaygeon Colonization Road. This road was a means to encourage settlement of the north. The Public Lands Act of 1853 permitted free grants of 100 acres on or near the colonization road. In Peterborough County, 2 were made; the Bobcaygeon and Burleigh Roads. Their modern routes are highways 649 & 28 respectively. 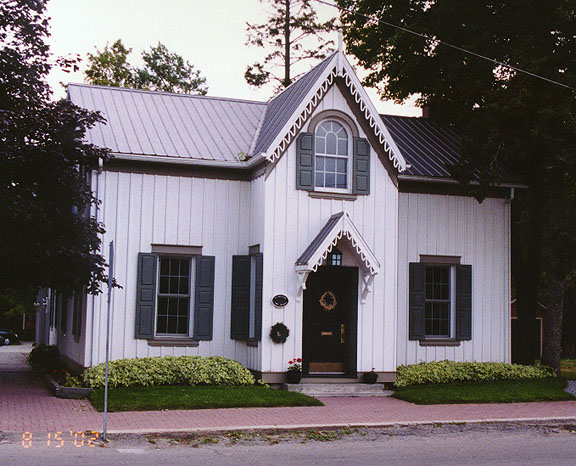 Bobcaygeon, with a population of about 1000 was incorporated as a village by a Victoria County By-law in 1876. In 1933 a dairy opened, incorporating the new pasteurization plant technology, and was known as Kawartha Dairy. As other smaller dairy establishments went out of business, they sold their licences to Kawartha Dairy. This dairy is still growing, and their trucks can be seen all over this area of Ontario, with stores in Lindsay, Bancroft and Minden. Oh, and they make really good ice cream too! The present, modern lock with its drop of ten feet is a popular spot for both boaters and land visitors. It is situated right downtown, with the main street passing over he swing bridge before us and the main part of town to our right. You will notice many similarities between Bobcaygeon and Fenelon Falls, both being lumbering owns, settled in the same period. Downtown Bobcaygeon (popu1ation 2800) boasts, a number of interesting boutiques and gift shops, as well as many historic buildings, and a holiday atmosphere. The horticultural Society is responsible for the many beautiful hanging baskets and window boxes, which decorate Main Street. Bobcaygeon is home to Ontario’s oldest fall fair (1858), and is known for hosting Canada’s premier Open Fiddle and Step Dance Contest. It has also been the host for the past 23 years to the Annual Canada/US Walleye Fishing Tournament. Up to 150 teams from all over North America set out to Sturgeon and Pigeon Lakes to catch “the big one” on the last weekend in May. 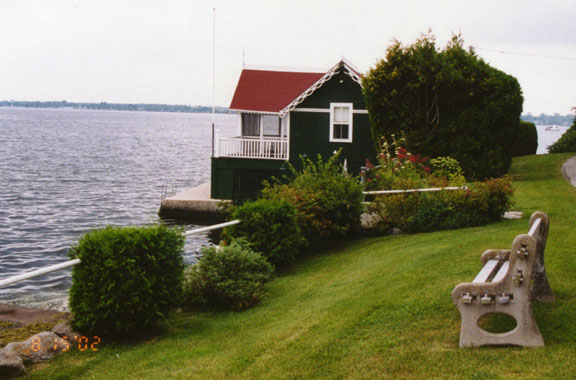 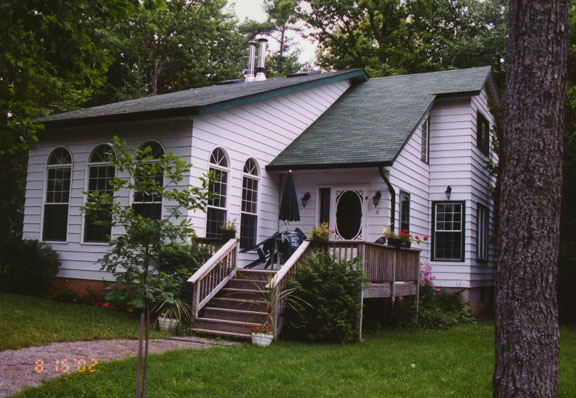 one of the summer homes

The octagonal church was constructed in 1915 to replace the church that burnt in 1888. A Toronto woman, Lady Flavelle, with a summer home at the point, was visiting relatives in Georgia when she came upon an unique church. She was so taken with it that she convinced her husband, an architect, to go to Georgia to study it. Plans were made, and materials shipped from Georgia so that an exact replica could be constructed at Sturgeon Point. 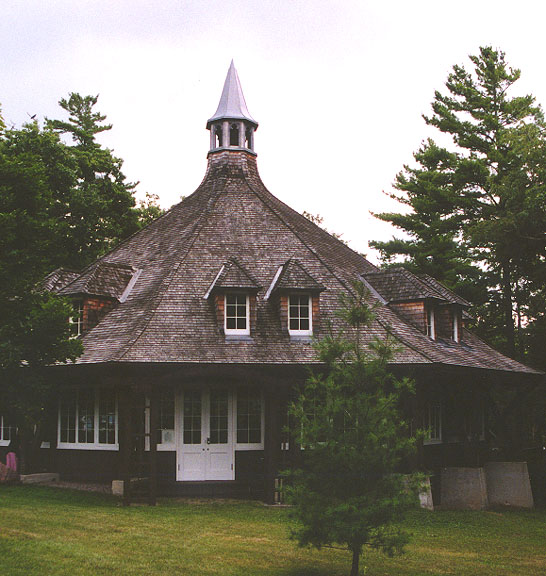 The octagonal building, constructed of Georgia pine, has windows on seven sides, and is supported by a centre pillar with beams branching out to the sloping ceiling. Small dormer windows admit light from above, and a belfry holding the bell to call the people to its non-denominational service, surmounts the structure.