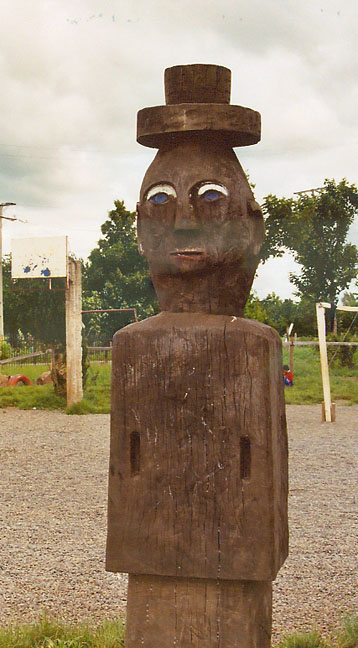 chemamüll at the Roble Huacho school

In the bottom of the sea lived a big snake called CAl CAl. It ruled the water and told it to start covering the earth. TEN TEN, another snake as powerful as CAl CAl, lived on top of the mountains. It told the Mapuches to climb the mountains when the water started to rise, but many Mapuches died in the attempt and turned into fish. The water went on growing and the Mapuches wore pitchers on their heads to protect themselves from the rain and the sun. They said CAl CAl CA! and answered TEN TEN TEN. They made sacrifices until the water calmed down. Those who saved their lives came down from the mountains and lived on the Earth. This Is the way the Mapuches were born. 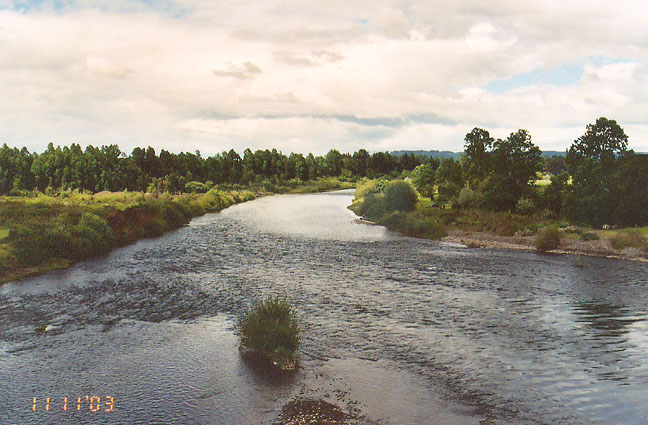 Mapuche live in the fertile land near the river

In the VI century, the ancestors of the Mapuches settled in the lake area. They were small groups who lived mainly on hunting and gathering. They also cultivated potatoes in small lots. 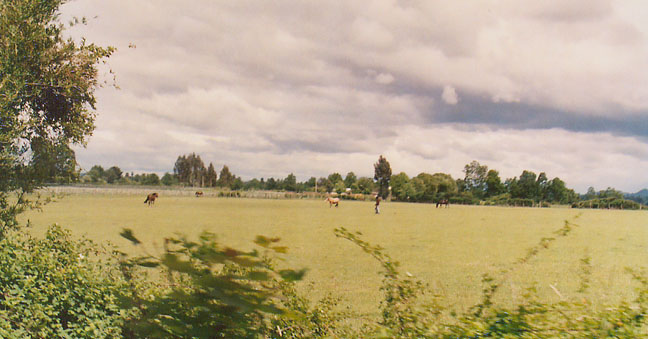 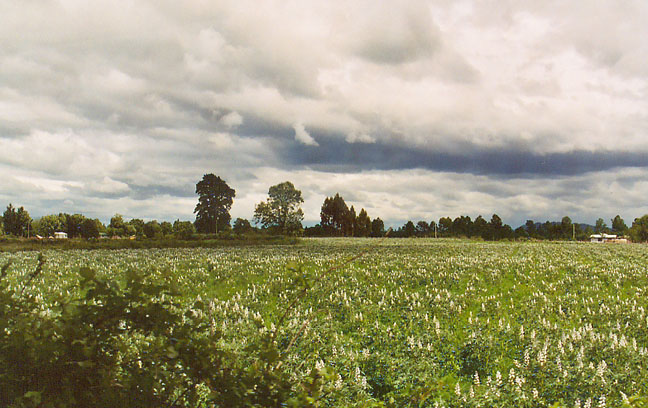 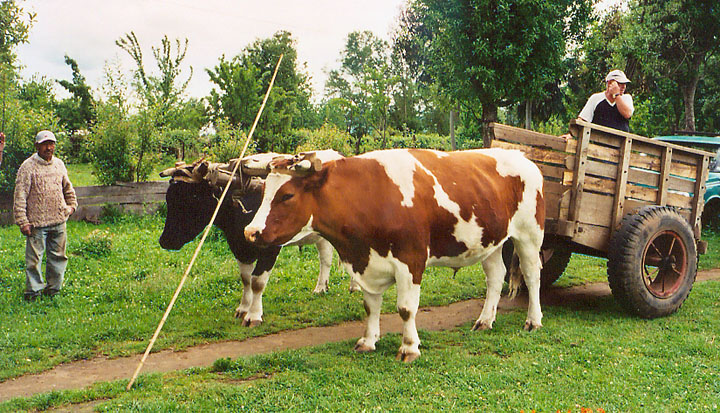 The environment of the Mapuches in Chile was apt for a small scale agriculture. They cultivated maize, potatoes, beans, quinoa, marrowfats, peppers and other vegetables. To enrich their diet, they gathered wild plants, hunted, breed llamas and other minor cattle in the North, and those who lived on the coast fished and gathered shellfish. 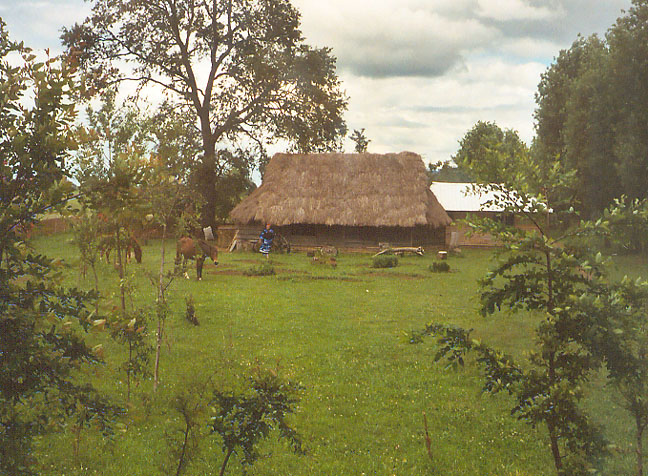 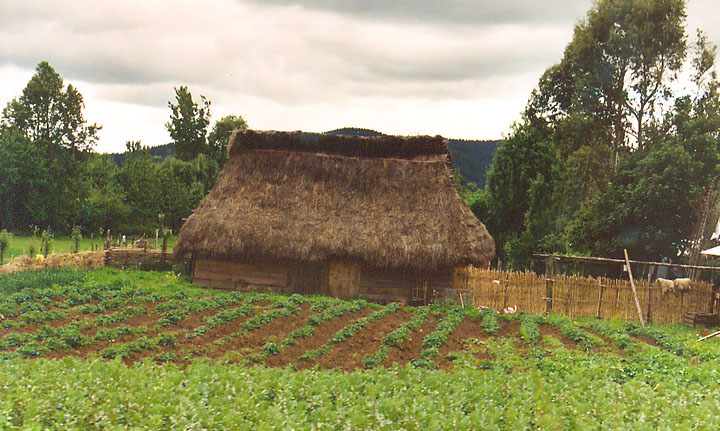 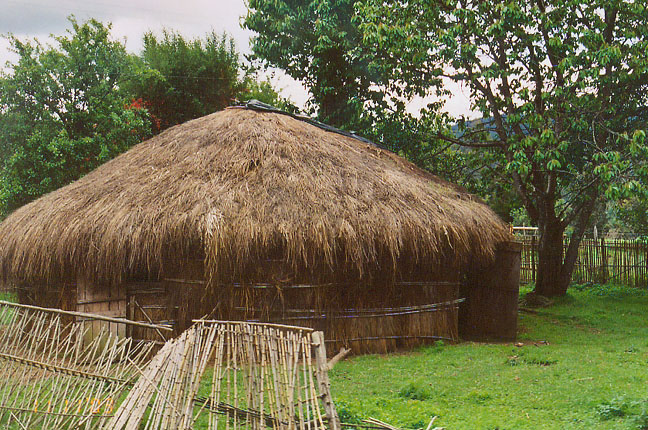 The traditional Mapuche dwelling or RUKA is a big wooden hut with a thatched roof, for one family. Before the Spanish harassment, rukas were far from one another, but war made them gather In small villages surrounded by a protective fosse or palisade. 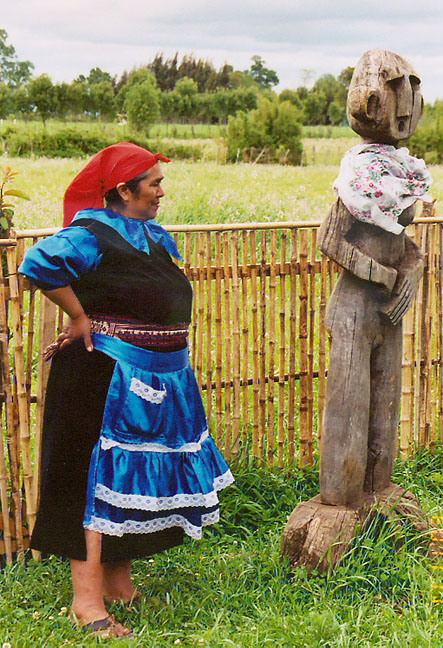 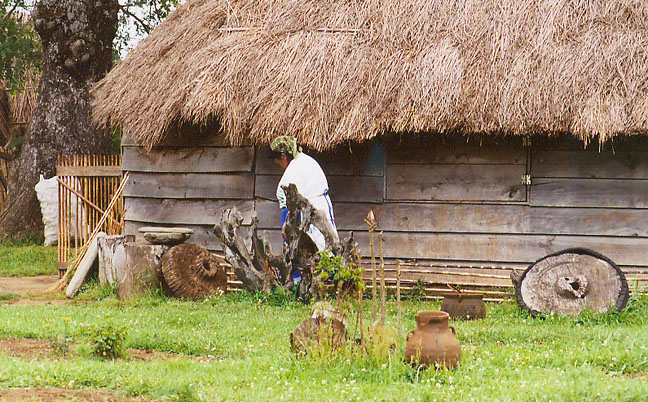 The NGUILLATUN is the main religious celebration of the Mapuches. They meet every year to thank and ask deities and ancestors for the common welfare. In agricultural communities, the celebration takes place in harvest time during the full moon, at the moment when It gives fertility to farms. 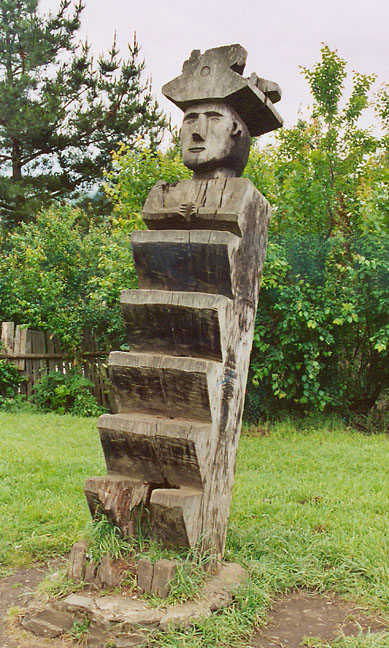 The ceremony lasts four days. It is celebrated in a plain farm where they set a ritual space In “U” shape open to the West, the sacred part of the World. For the celebration, they set up an altar or REWE made of canes (Chusquea culeou) forming a ladder decorated with yellow, blue or white flags and also with branches of maitenes (Maitenus boaria), lengas (Notophagus pumilia), coihues (Notophagus dombeyi) and other trees. It is directed by the Machi. During the celebration, there are alternate rituals, dances, prayers, sacred songs, riding on horseback around the sacred place (AWUN), and offerings to the Earth , where they spread MUDAI or CHICHA, mate, tobacco and the blood of sacrificed animals 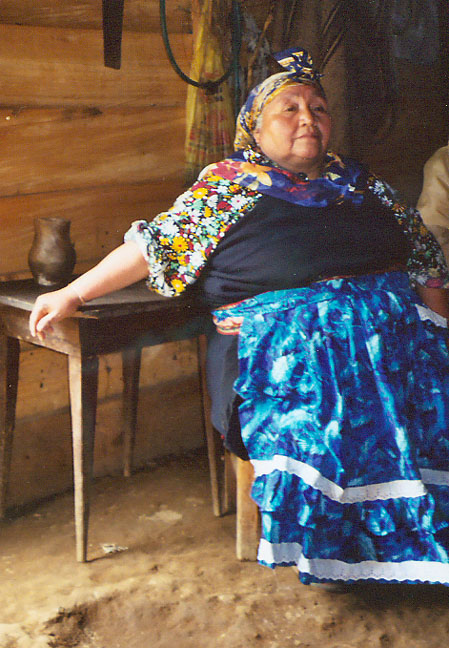 a Machi in her Ruka 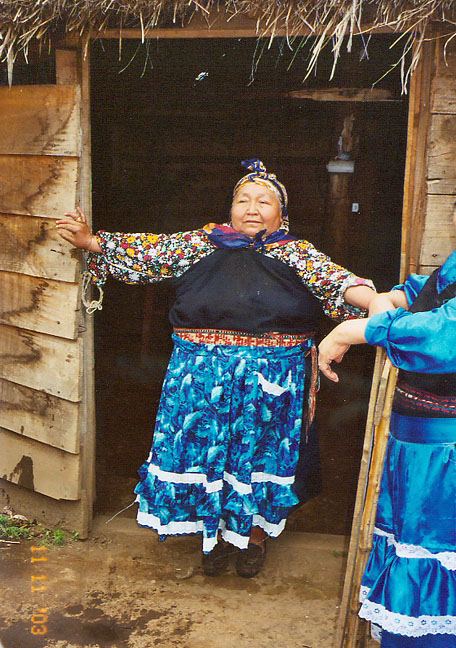 The machi is the mediator between men and the divinity, and maintains the equilibrium between good and evil fortes on the Earth. In earlier times, this task was performed by homosexual men or women, but later it became almost exclusively feminine. 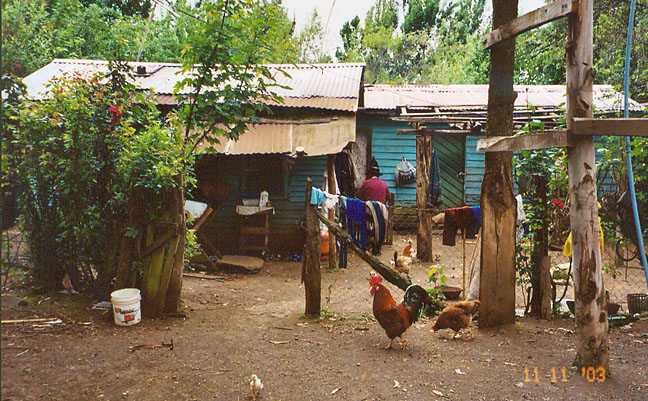 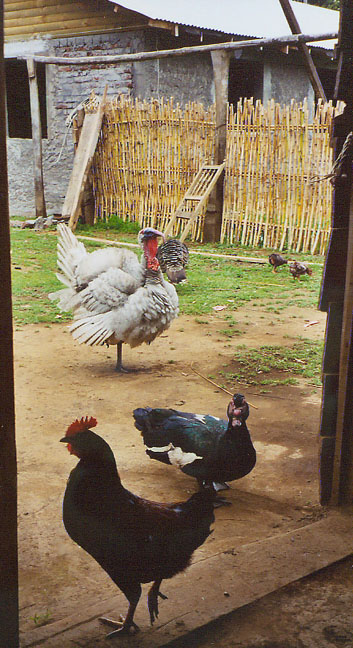 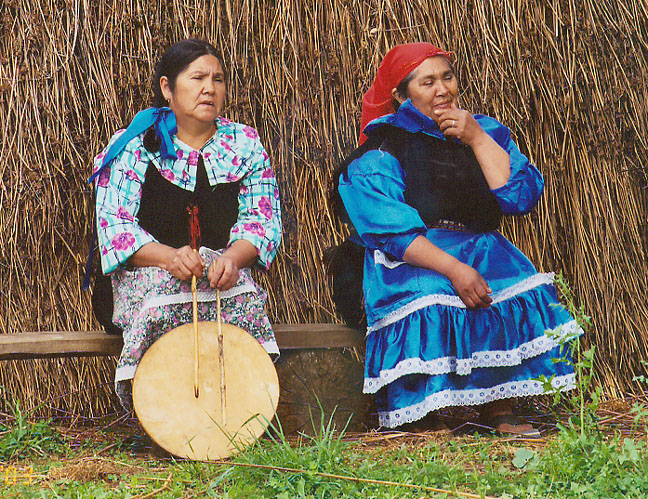 the Kultrun used to provide music for the dance 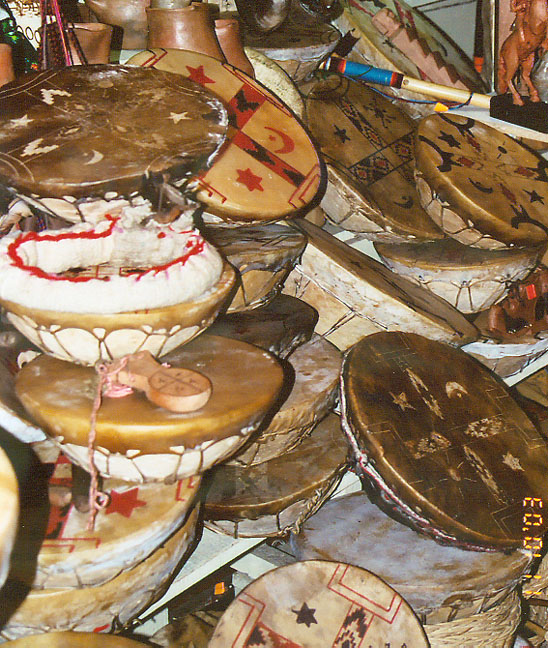 Kultrun for sale at the Temuco market 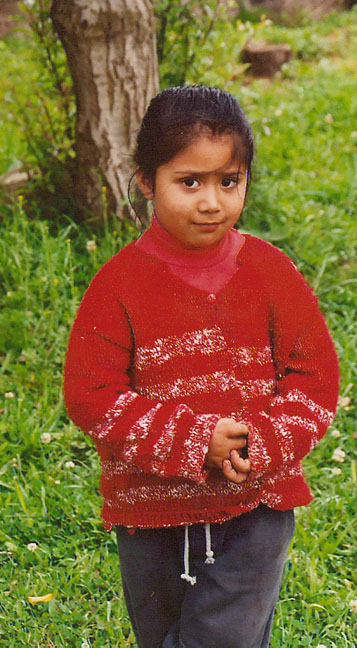 To make the box of the KULTRUN, they generally use the bark of the VOIGUE (Drymis winteri), a sacred shrub for the Mapuches. The drumhead may be made of guanaco, sheep or colt skin. 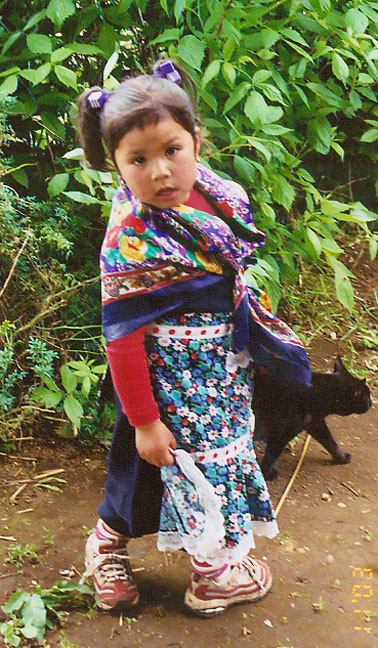 The Machi “introduces her song” in the Kultrun before stretching the skin to leave her soul in it. She also introduces small sacred objects, like stones, feathers or healing herbs, which make it sound as a rattle. 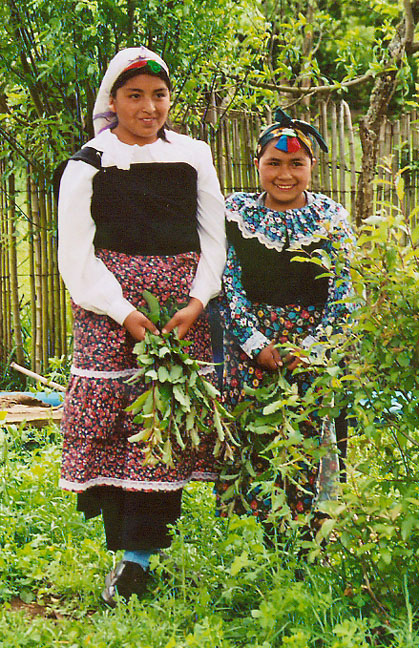 On the head, they draw different symbols representing the Universe. A cross divides the head into four parts, the vertical line representing the cosmos and the horizontal one the Earth. The intersection is the centre of the World, the sacred place from where the Machi gets in contact with their Gods and ancestors helped by the sound of the Kultrun.

Cooking with the Mapuche

Weaving with the Mapuche 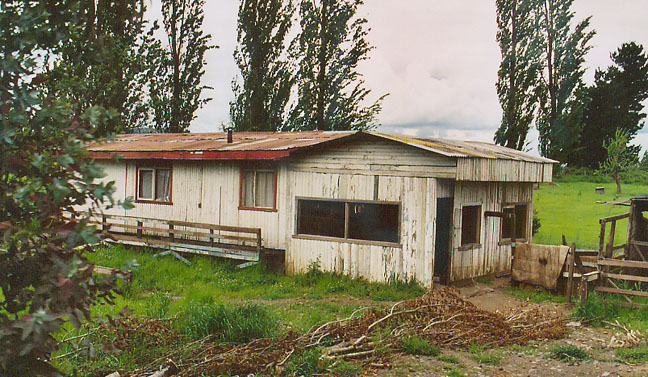 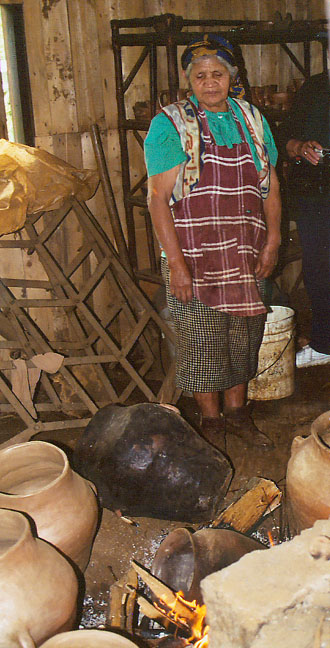 Potter and her kiln 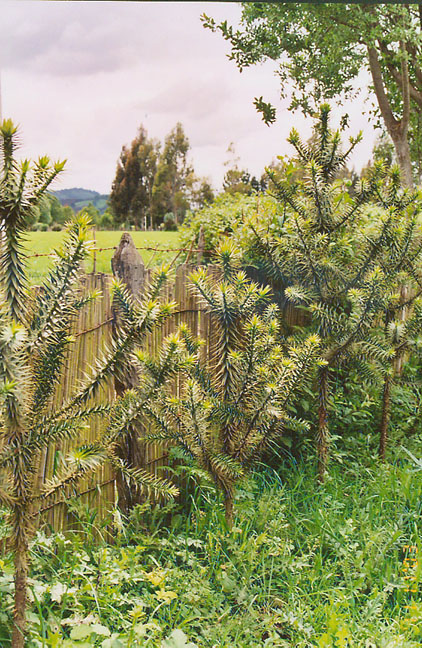 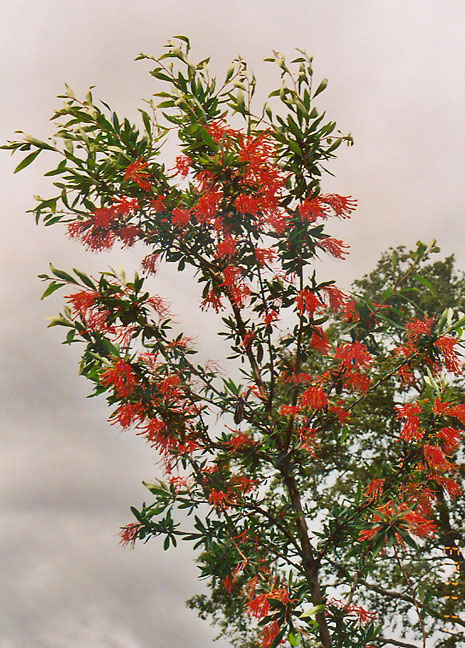 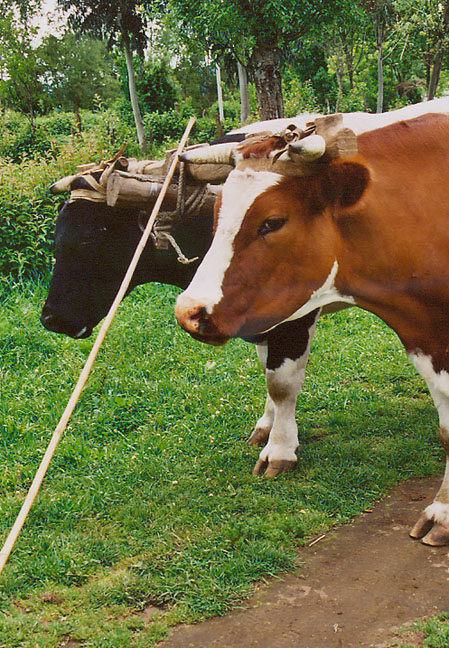