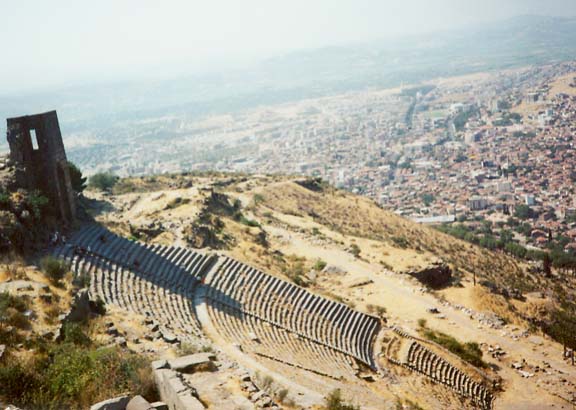 the theatre of Pergamum on the hill above the plane 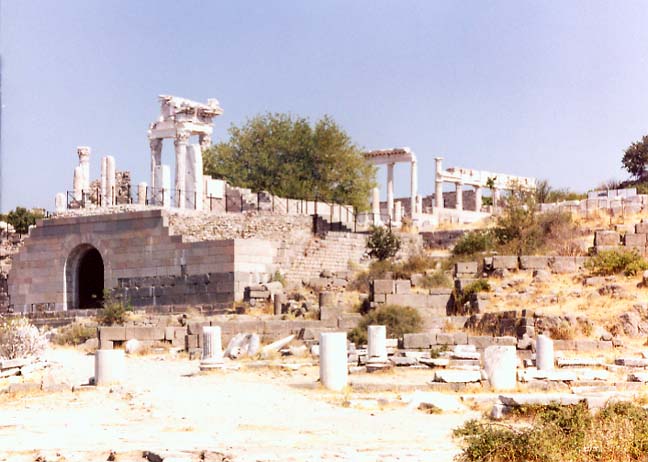 , also known as Pergamon or Pergamos, ancient city of northwest Asia Minor, in Mysia (now Turkey), and later capital of the kingdom of Pergamum. The city acquired prominence when the Macedonian general Lysimachus chose its acropolis as a stronghold for his treasures, which he entrusted to the governor, Philetaeros. 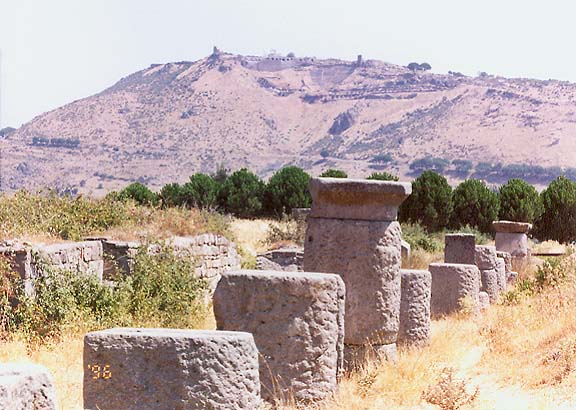 On the death of Lysimachus, Philetaeros became the ruler of Mysia and Troas. His nephew Eumenes I (reigned 263-241 BC) developed the resources and prosperity of the kingdom. Eumenes' cousin and successor, Attalus I Soter, who reigned from 241 to 197 BC, became master of northwestern Asia Minor through his victories over the Gauls and the Seleucid king Antiochus III, the Great, and allying himself with the power of Rome. 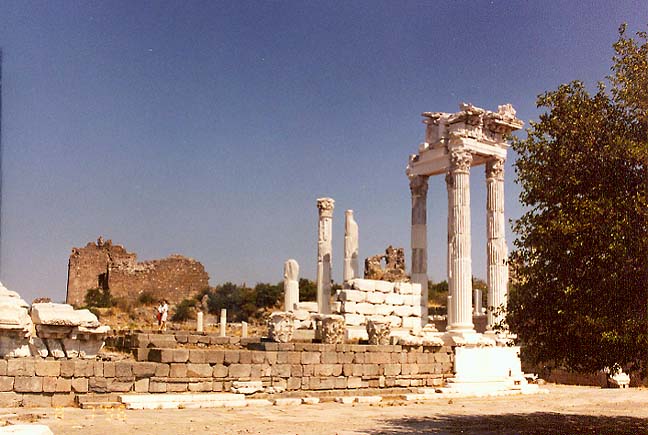 Attalus made his capital the artistic and literary center of Asia Minor. Eumenes II, son of Attalus I, continued the Roman policy of his father and brought most of Asia Minor under his sway. To his reign belong the altar of Zeus and the development of the library, founded by his father, where a group of scholars established a school of grammatical study in opposition to the scholars of the Alexandrian library. 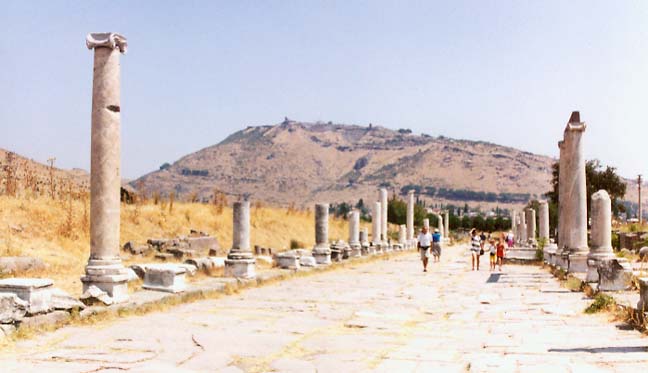 The prosperity and power of Pergamum continued under Attalus II Philadelphus, who reigned from about 160 to 138 BC, and Attalus III Philometor, who reigned from 138 to 133 BC; the last-named ruler, having no heirs, bequeathed his kingdom to the Romans. Under Roman control, Pergamum remained one of the chief cities of Asia Minor, being the capital of the province of Asia. The ruins of the ancient city surround the modern town of Bergama. Noted for their splendor, they include a Roman theater, an amphitheater, and a circus. 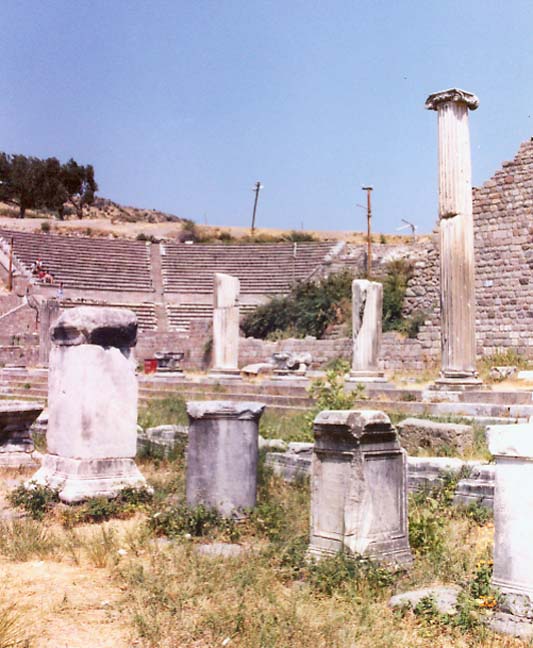 the amphitheater in the background 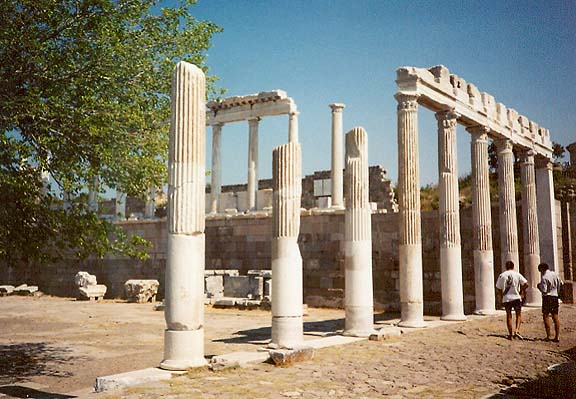 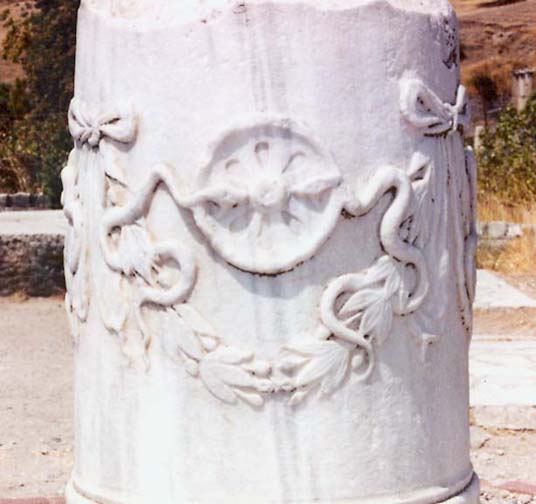 the insignia of the Doctor

(129-199?), the most outstanding physician of antiquity after Hippocrates. His anatomical studies on animals and observations of how the human body functions dominated medical theory and practice for 1400 years. Galen was born of Greek parents in Pergamum, Asia Minor, which was then part of the Roman Empire. A shrine to the healing god Asclepius was located in Pergamum, and there young Galen observed how the medical techniques of the time were used to treat the ill or wounded. He received his formal medical training in nearby Smyrna and then traveled widely, gaining more medical knowledge. About 161 he settled in Rome, where he became renowned for his skill as a physician, his animal dissections, and his public lectures. About 169, the Roman emperor Marcus Aurelius appointed Galen as the physician to his son Lucius Aelius Aurelius Commodus. Most of Galen's later life was probably spent in Rome. Galen dissected many animals, particularly goats, pigs, and monkeys, to demonstrate how different muscles are controlled at different levels of the spinal cord. He noted the functions of the kidney and bladder and identified seven pairs of cranial nerves. He also showed that the brain controls the voice. Galen showed that arteries carry blood, disproving the 400-year-old belief that arteries carry air. Galen also described the valves of the heart and noted the structural differences between arteries and veins, but fell short of conceiving that the blood circulates. Instead, he held the erroneous belief that the liver is the central organ of the vascular system, and that blood moves from the liver to the periphery of the body to form flesh. 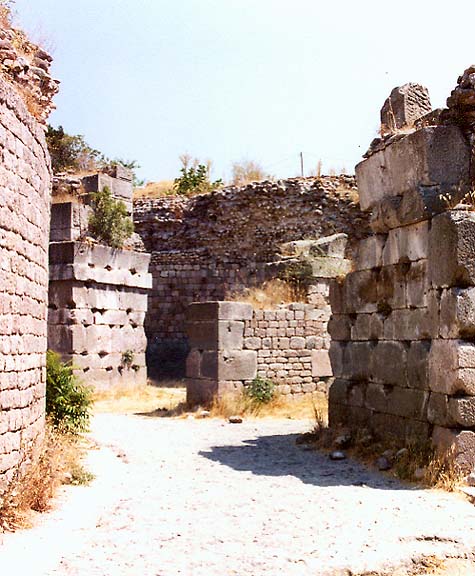 remains of Galen's clinic which catered to Roman women

Galen was also highly praised in his time as a philosopher. In his treatise On the Uses of the Parts of the Body of Man he closely followed the view of the Greek philosopher Aristotle that nothing in nature is superfluous. Galen's principal contribution to philosophic thought was the concept that God's purposes can be understood by examining nature. Galen's observations in anatomy remained his most enduring contribution. His medical writings were translated by 9th-century Arab thinkers and became highly esteemed by medical humanists of Renaissance Europe. Galen produced about 500 tracts on medicine, philosophy, and ethics, many of which have survived in translated form. 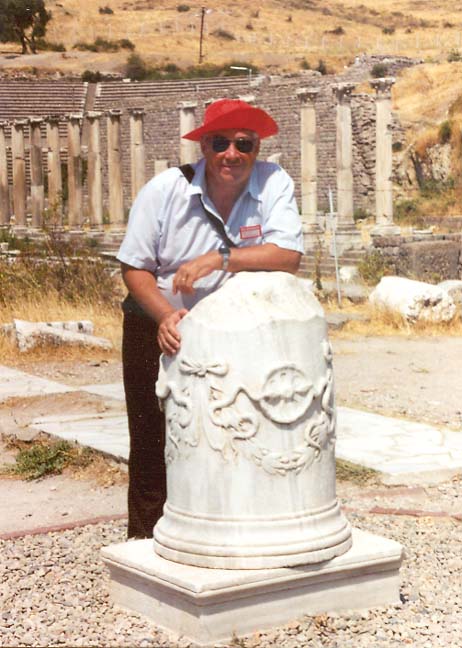 "The Traveler", Galen, at the site of his namesake's clinic 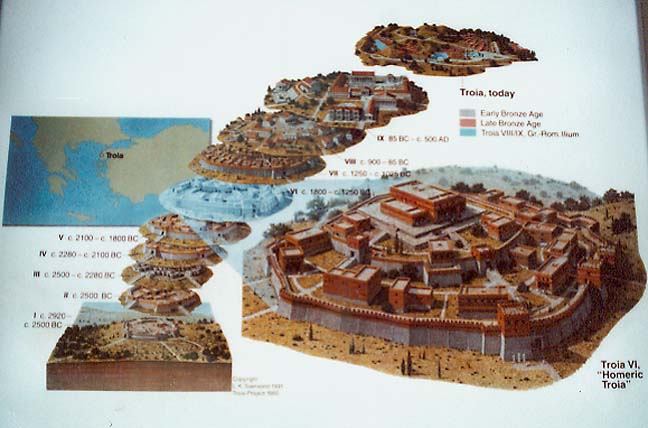 the layers of Troy

, also Ilium (ancient Ilion), famous city of Greek legend, on the northwestern corner of Asia Minor, in present-day Turkey. The legendary founder of the city was Ilus, the son of Tros, from whom the name Troy was derived. The son and successor of Ilus was Laomedon, who was slain by the hero Hercules, when Hercules captured the city. It was during the reign of Laomedon's son Priam that the famous Trojan War occurred, which resulted in the capture and destruction of the city. 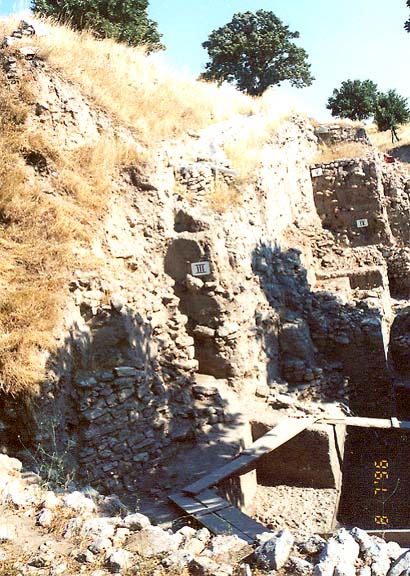 one of the Schliemann excavations

The Troy that appears in the Homeric poems was long regarded as a purely legendary city, but in 1870 the German archaeologist Heinrich Schliemann began excavations that unearthed the actual stone walls and battlements of an ancient city on the mound called Hissarlik ("Place of Fortresses"), about 6.5 km (about 4 mi) from the Aegean Sea and equidistant from the Dardanelles. Schliemann's excavations were continued after his death by his assistant, Wilhelm Dörpfeld, whose work in 1893 and 1894 threw new and important light on Schliemann's discoveries. 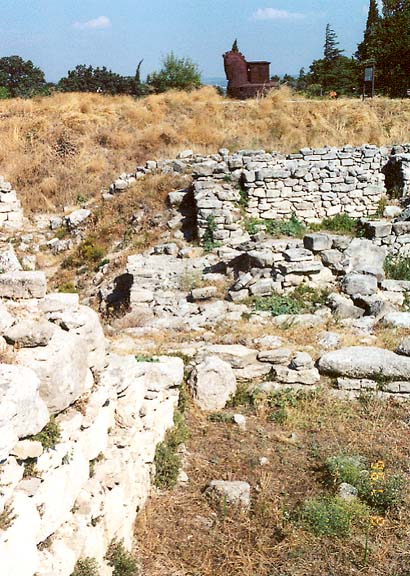 Between 1932 and 1938 new excavations were carried on at the site by the University of Cincinnati, under the direction of the American archaeologist Carl Blegen. 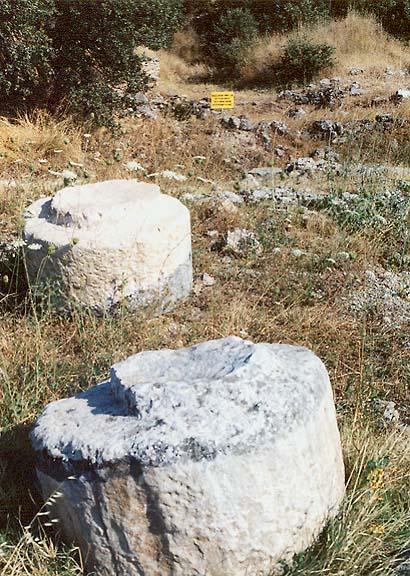 On the mound of Hissarlik, the following successive settlements have been determined: Troy I, an early settlement with a wall built of small stones and clay, its date being perhaps about 3000 BC; Troy II, a prehistoric fortress, with strong ramparts, a palace, and houses, dating from the 3rd millennium BC; Troy III, IV, and V, prehistoric villages successively built on the debris of Troy II during the period from 2300 to 2000 BC; Troy VI, a fortress, including a larger area than any of the preceding settlements, with huge walls, towers, gates, and houses dating from 1900 to 1300 BC or later; Troy VIIA, a reconstruction of Troy VI, built in the later part of this period after the city had been destroyed by an earthquake; Troy VIIB and VIII, Greek villages, of simple stone houses, dating from about 1100 BC to the 1st century BC, and Troy IX, the acropolis of the Greco-Roman city of Ilion, or New Ilion, with a temple of Athena, public buildings, and a large theater, and existing from the 1st century BC to about AD 500. 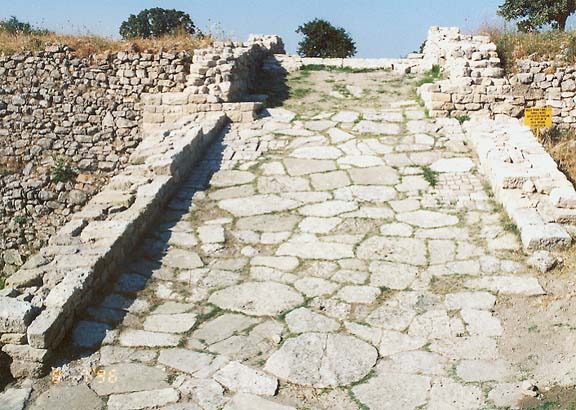 Schliemann discovered the first five settlements and identified Troy II with the Homeric Troy. Dörpfeld's discoveries, confirmed by Blegen, proved that the Homeric Troy must be identified with Troy VIIA, which was destroyed by fire about the traditional date of the Trojan War. 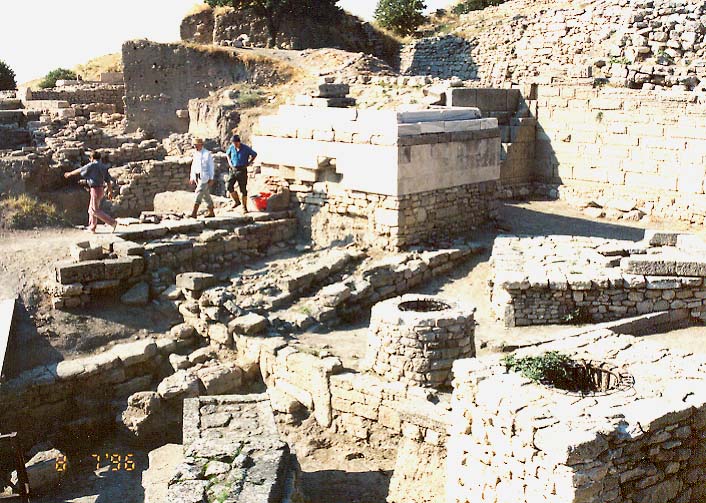 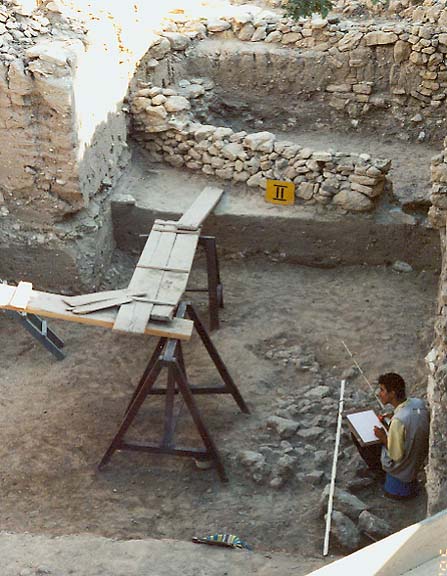 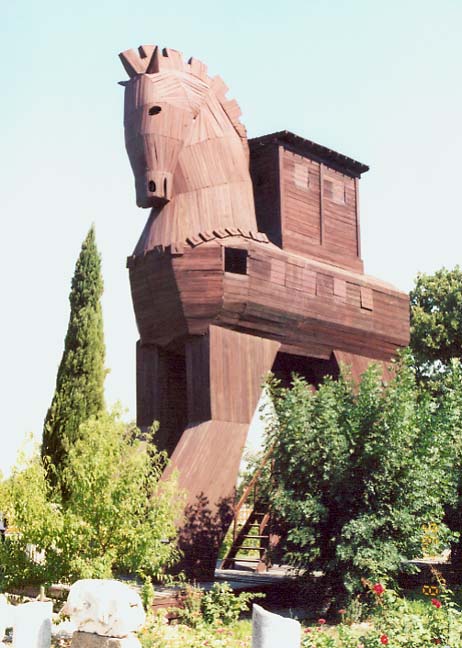 a modern concept of the Trojan Horse