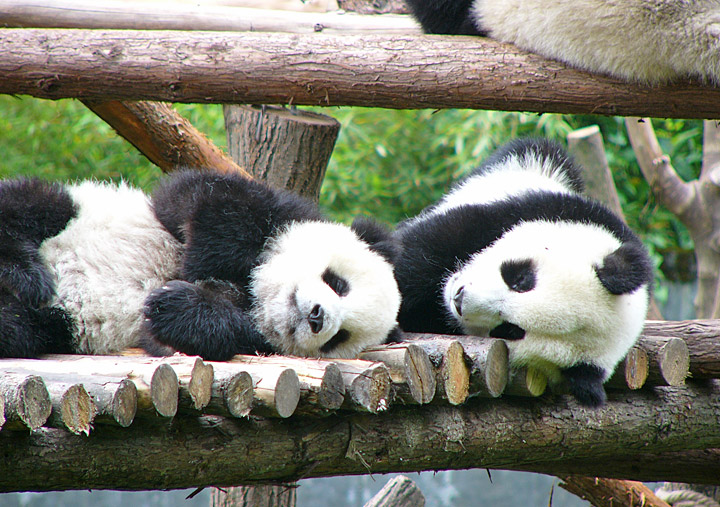 Giant pandas usually roam over a large area, covering distances of more than a kilometer every day, but the captive-bred giant pandas, as cubs, often adapt well to life in a cage, apparently enjoying the company of their keepers and happy to perform for the public. The birth rate of wild pandas is comparable to that of bears, and while infant mortality is high, it is far lower than in captivity. 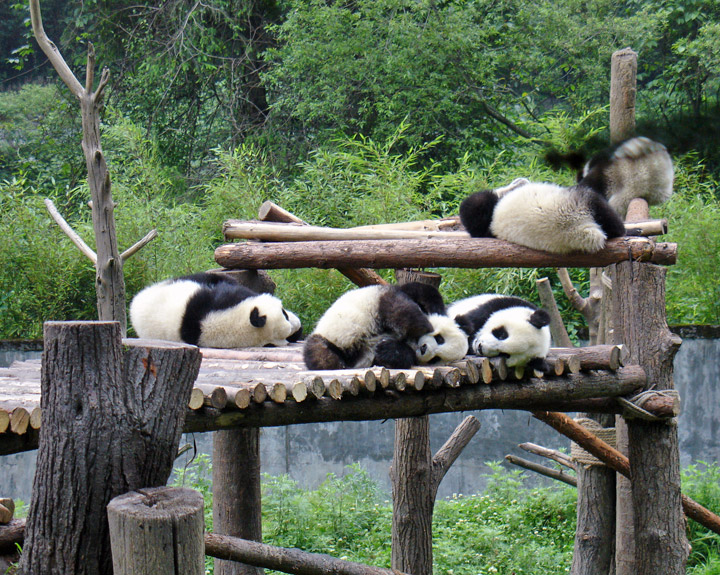 Young pandas are known to be very gentle and friendly.
They are like your house pet (puppy), they love to have their back scratched. 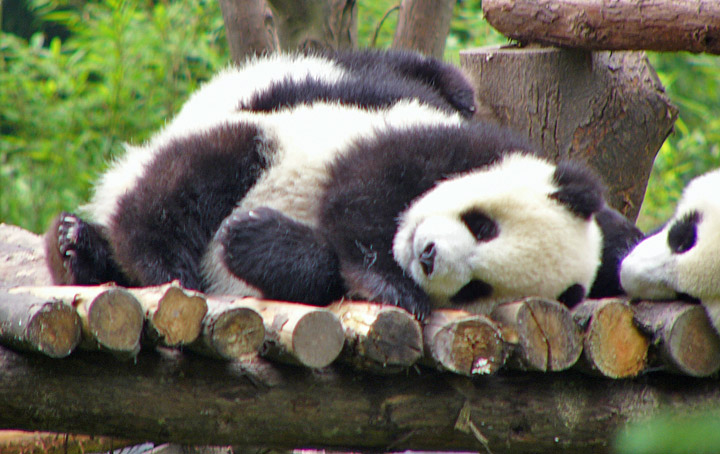 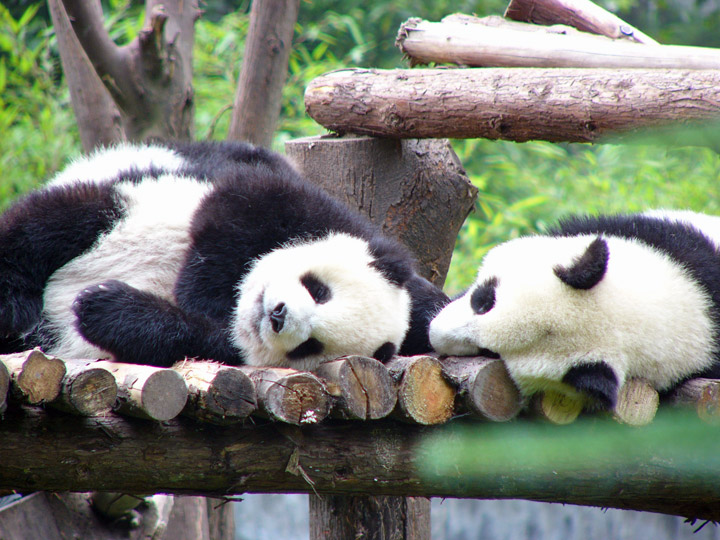 For a newborn giant panda in its natural habitat, after a cub is born, the mother quickly directs the newborn to her nipples to drink her milk. When a baby panda is hungry again it will cry like a human baby. The cub may cry for the mothers milk as often as twelve (12) times a day. With the mothers huge paw she could cover her baby. 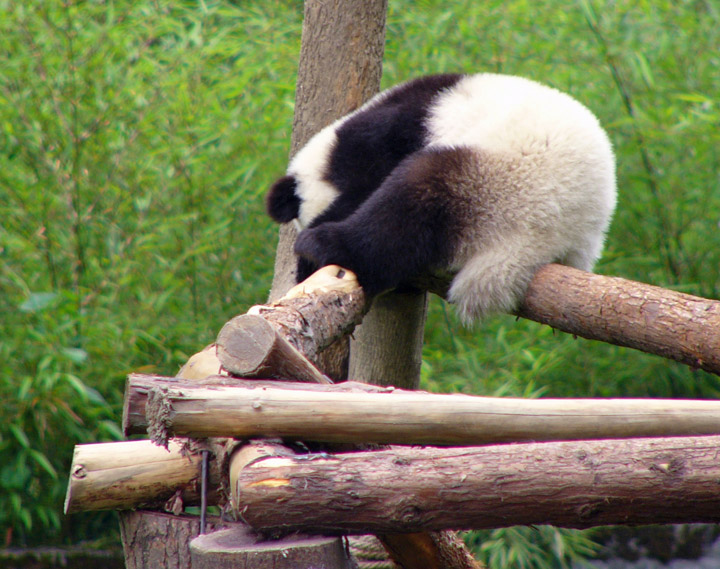 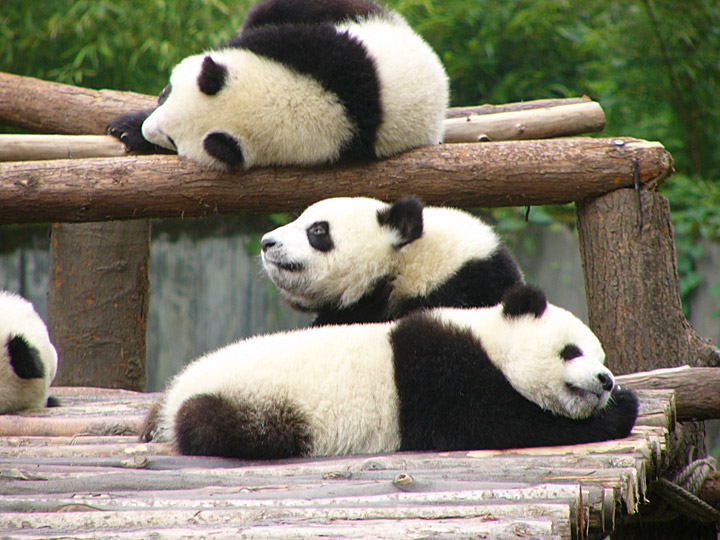 While members of the order Carnivora (meat eating), giant pandas have become almost exclusively vegetarians with accompanying changes in their dental structure and, also, to a lesser degree, their digestive tract. Their digestive system is typical of a carnivore and only slightly adapted for digesting bamboo. The esophageal region has a toughened lining and their short intestines are not sufficiently developed to remove all of the available nutrients from the fibrous bamboo on which they feed. 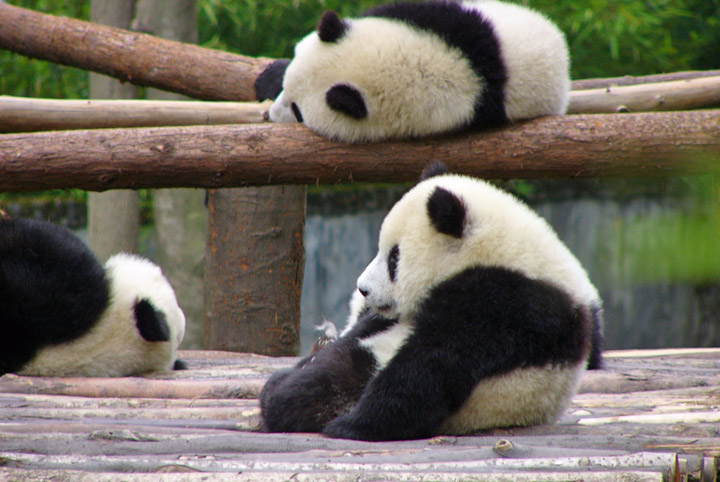 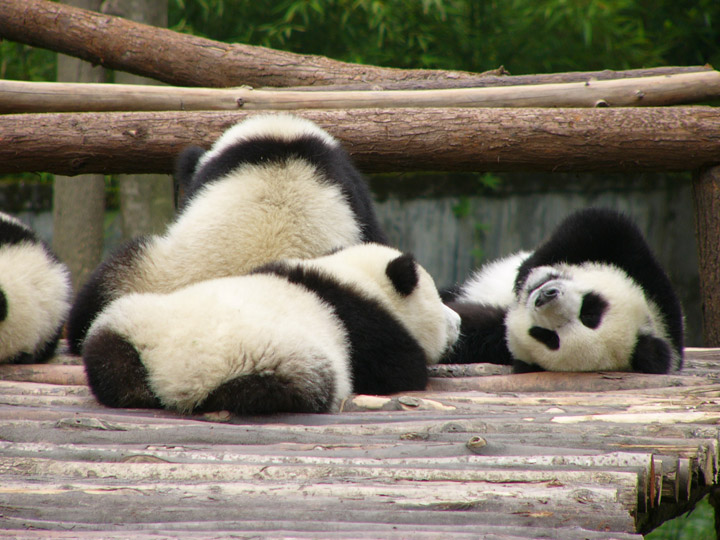 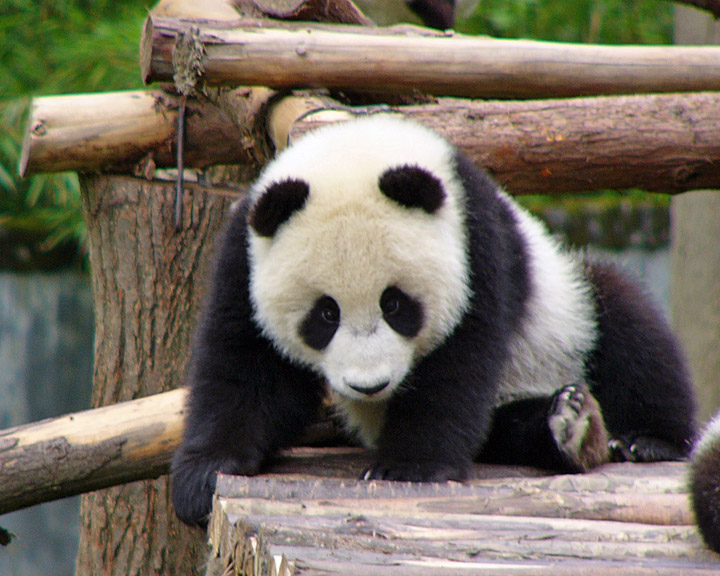 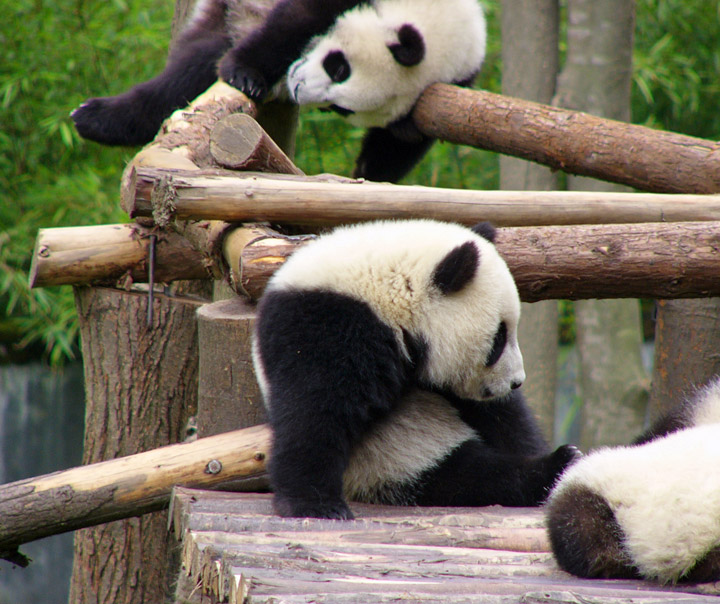 Except for females accompanied by cubs, giant pandas live a solitary existence. During the breeding season, several males may compete for access to a female. Home ranges of females are usually mutually exclusive, although they overlap occasionally, while the home range of each male may overlap those of several females. 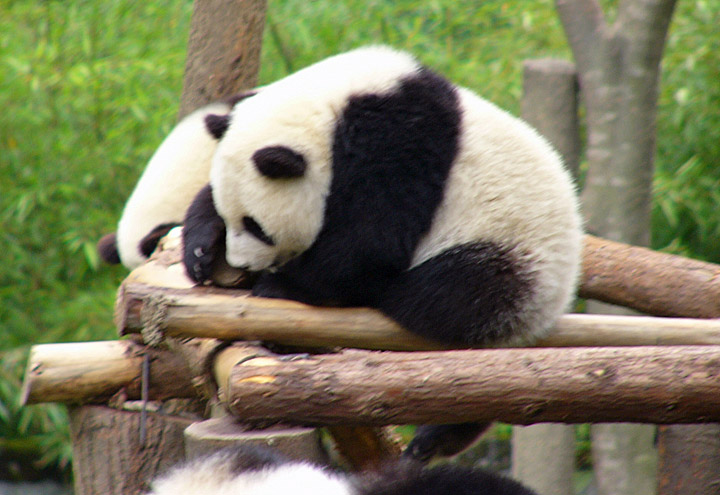 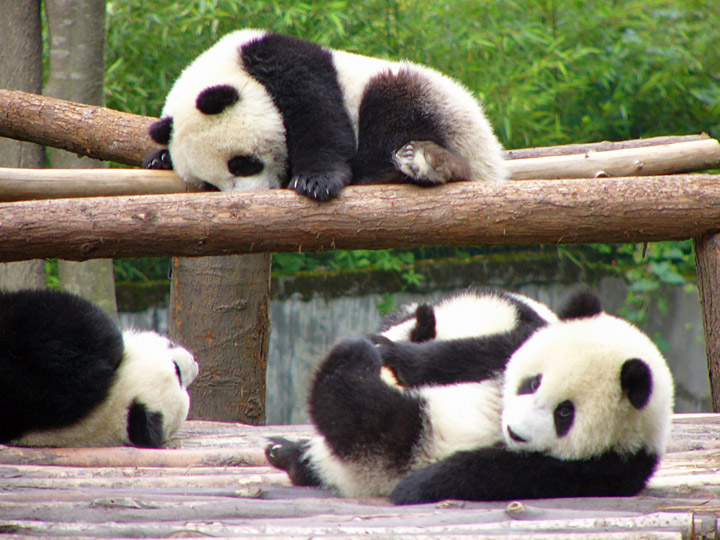 Pandas communicate by rubbing an acetic- smelling substance-secreted by glands surrounding the anogenital area-onto tree trunks and stones. They also scratch trees. Most territorial marking is thought to be done by males. Pandas are quite vocal and eleven distinct calls have been identified in the wild, although the function of each is not understood. In captivity, females vocalize during estrus as well. 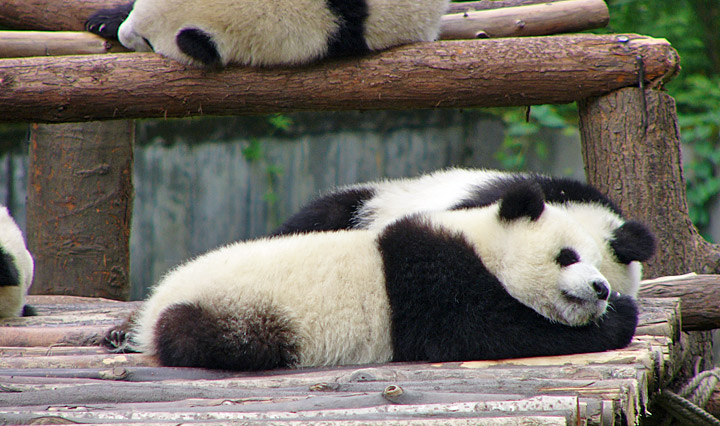 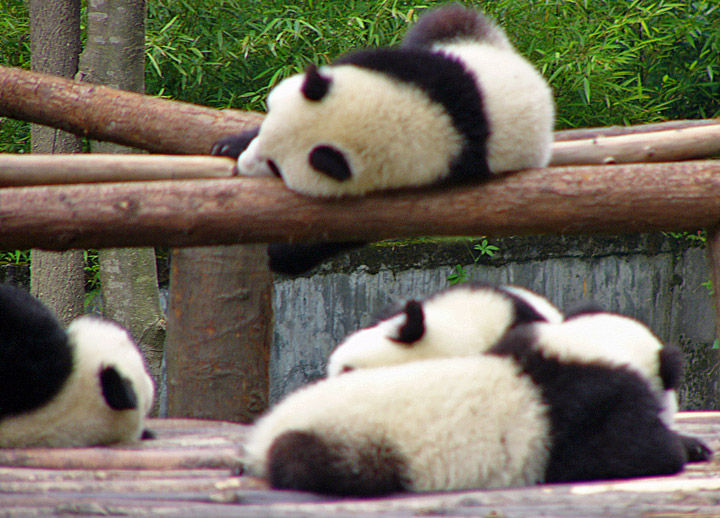 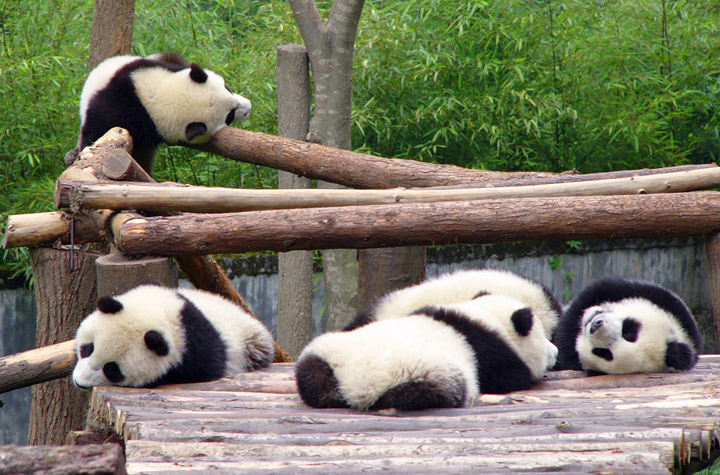 Quicktime video may take a few moments to load