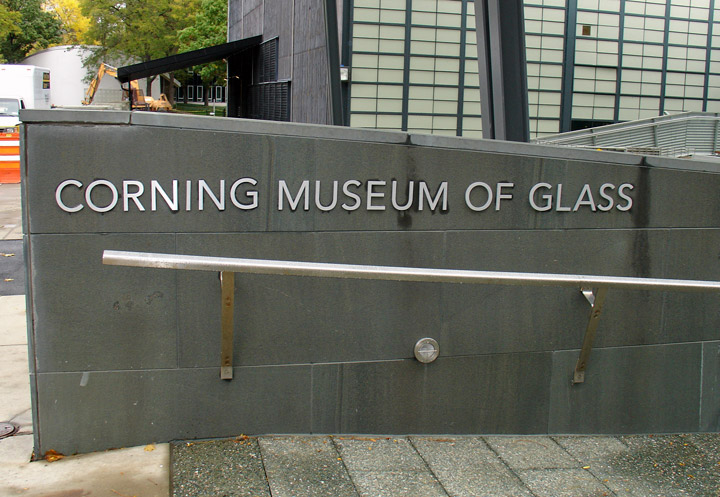 The Corning Museum of Glass is the world's premier institution
dedicated to the art, history, and science of glass.

The Glass Collection Galleries show the most comprehensive and celebrated glass collection in the world. The galleries explore Near Eastern, Asian, European, and American glass and glassmaking from antiquity through present day. They tell the story of glass creation, from a full-scale model of an Egyptian furnace to the grand factories of Europe, and, then America, and finally, to the small-scale furnaces that fueled the Studio Glass movement that began in America in 1962. It contains objects representing every country and historical period in which glassmaking has been practiced. 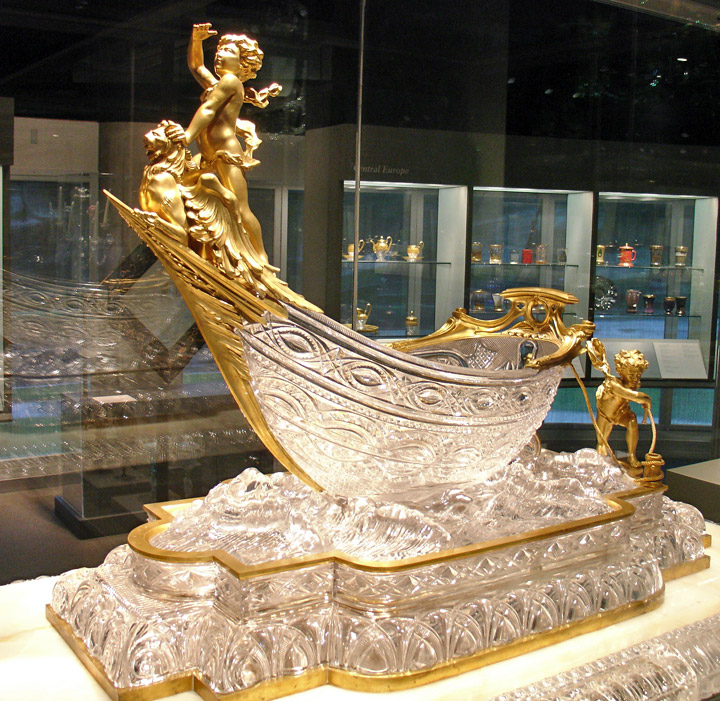 A gallery presents a broad range of glass from the Baroque to late Victorian periods. There are many examples of English lead glass and Bohemian chalk glass, two pivotal 17th-century innovations. Other displays include glass furniture, chandeliers, and objects made for world's fairs. 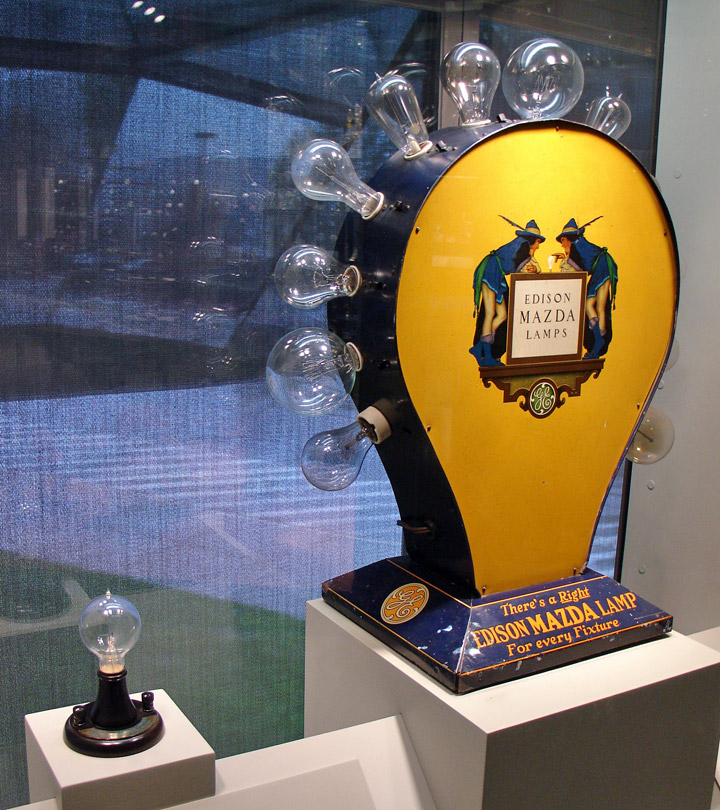 Electric lighting was slow in coming to the American countryside. In the 1920s, lamps and bulbs were not the routine purchases they are today. Customers who wanted to test bulbs before purchasing them would use a bulb tester in their local hardware store. This nearly complete tester, with its period bulbs, is a rare find. It was made about 1925 by American Art Works Inc. in Coshocton, Ohio, for the Edison Mazda lamp division of the General Electric Company. The logo, which shows two knaves facing each other while they appear to be discussing or contemplating a light bulb, was designed by the American painter Maxfield Parrish. This logo first appeared—without the light bulb or the General Electric trademark—on the cover of the November 10, 1921, issue of Life magazine. 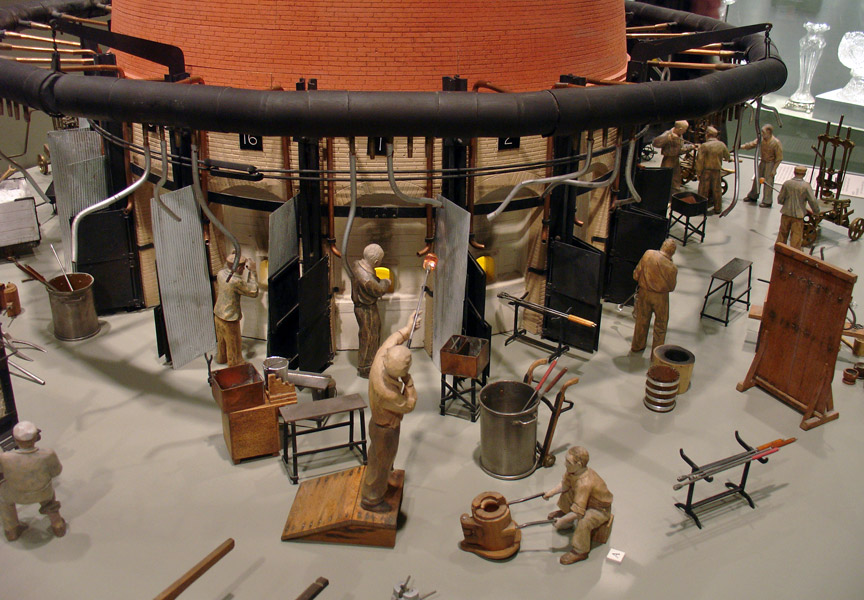 a model of a factory for blowing window glass. 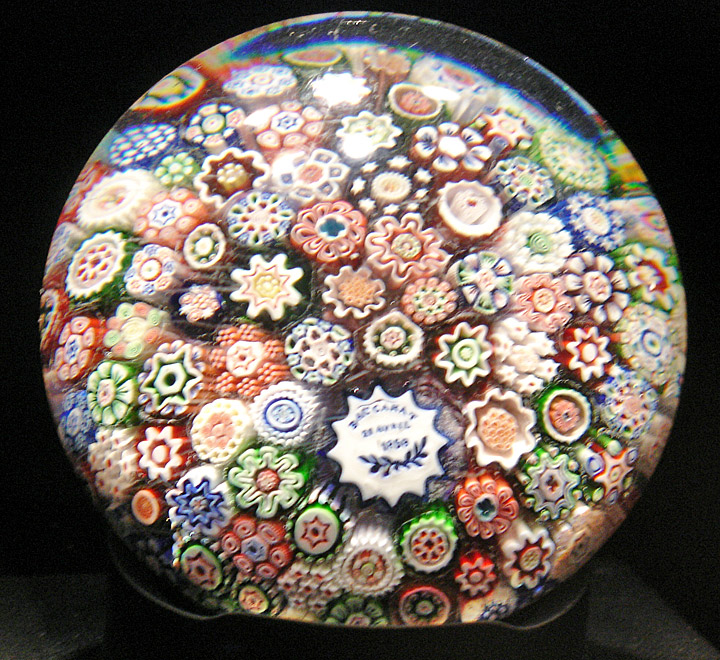 The Corning Museum of Glass houses the world's largest and most comprehensive collection of paperweights. This display presents the finest pieces made by European companies in the 19th century, as well as some outstanding modern examples. 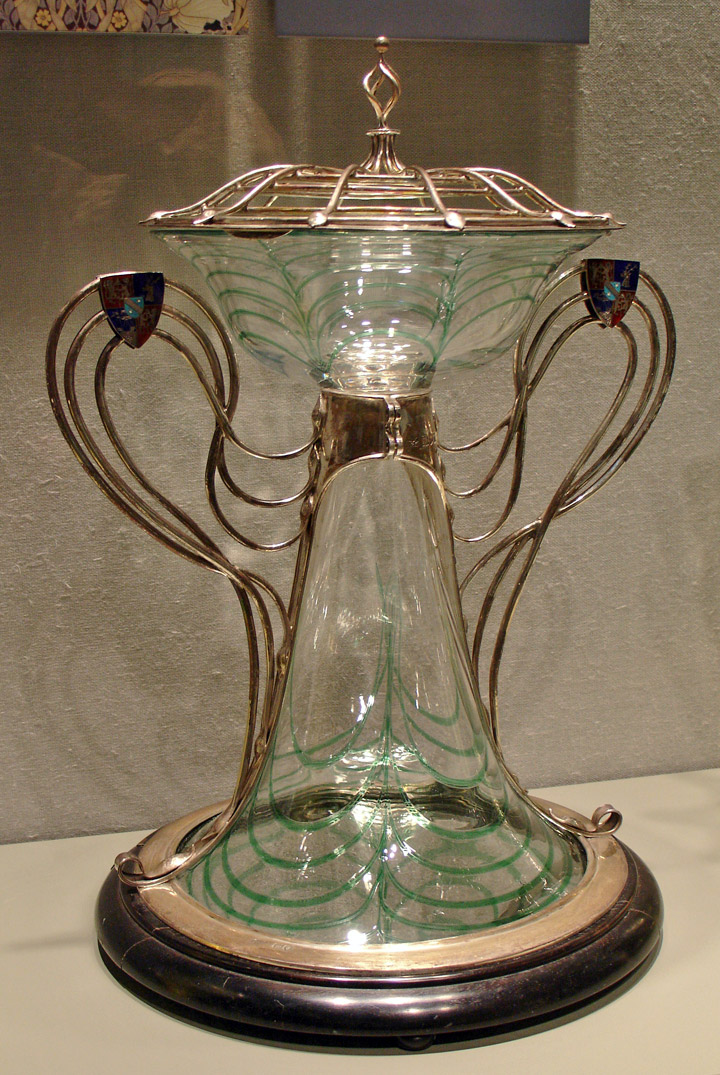 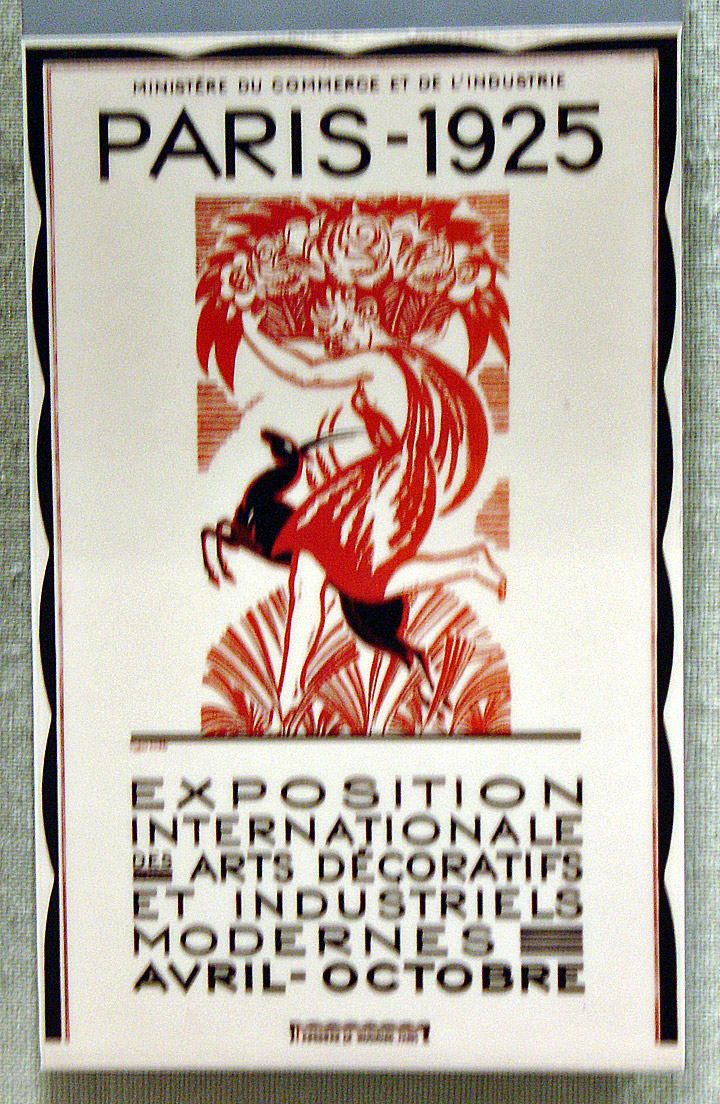 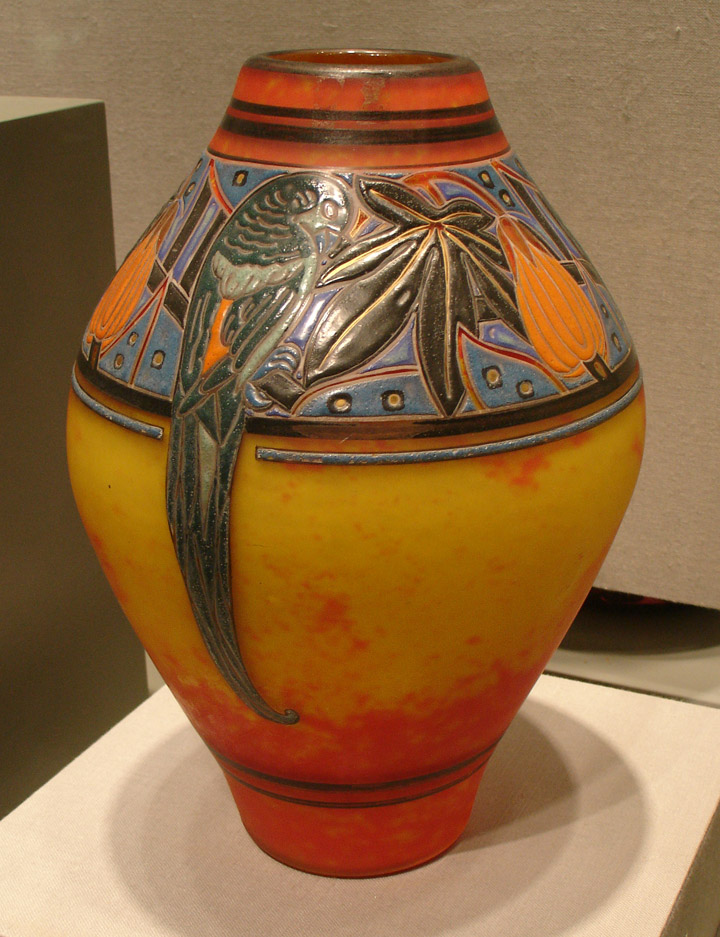 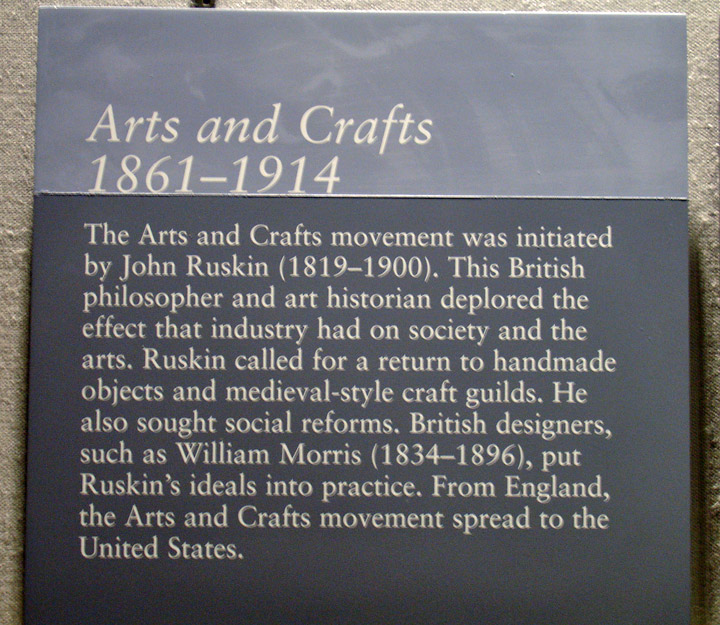 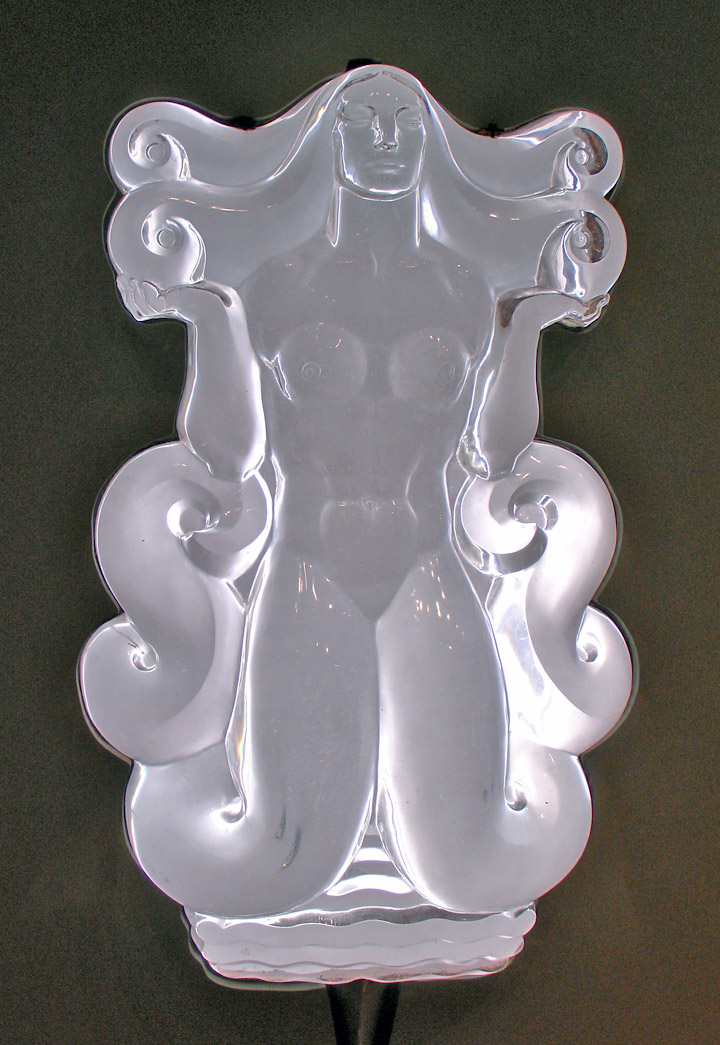 Modern Glass gallery shows one-of-a-kind and limited production art glass vessels, stained glass, furniture, lighting, and decorative objects and accessories from about 1880 to 1960. International in scope, the gallery emphasizes the use of glass as a medium for artistic expression. 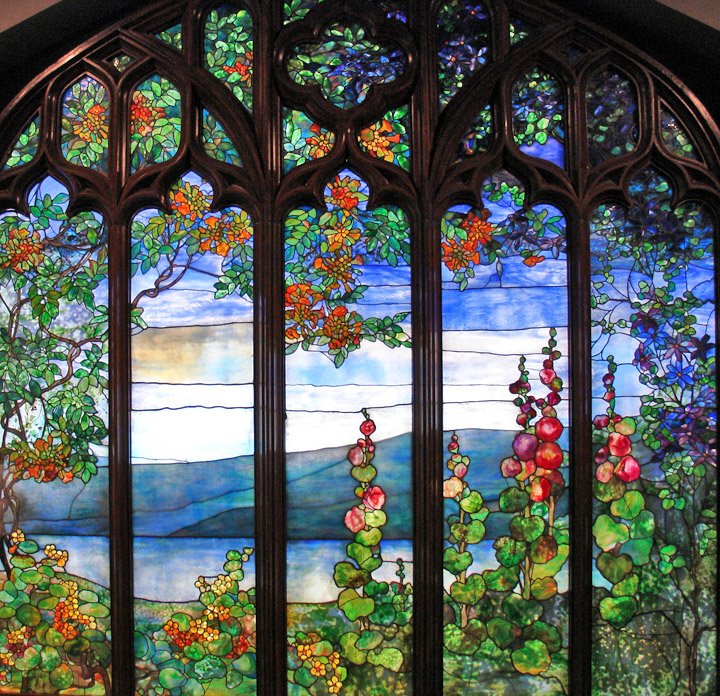 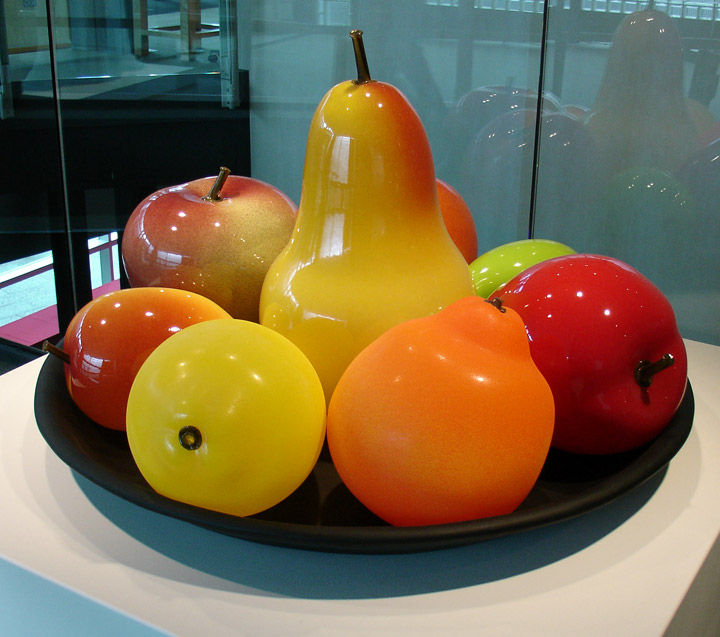 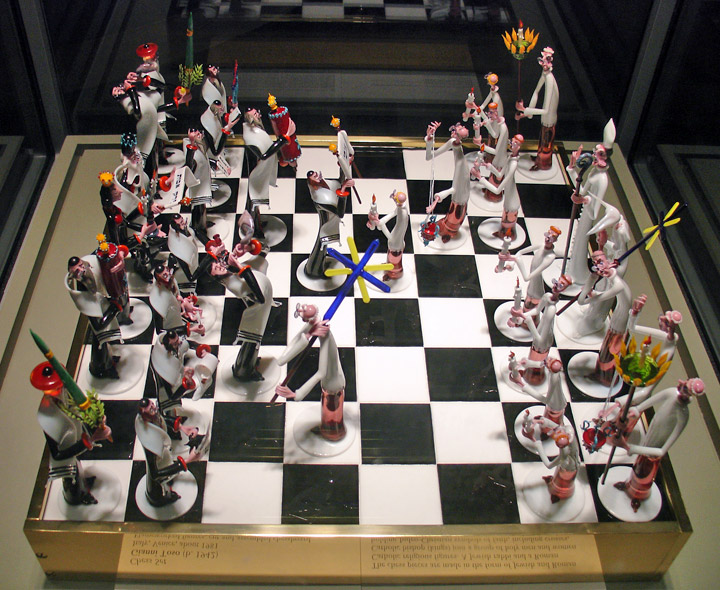 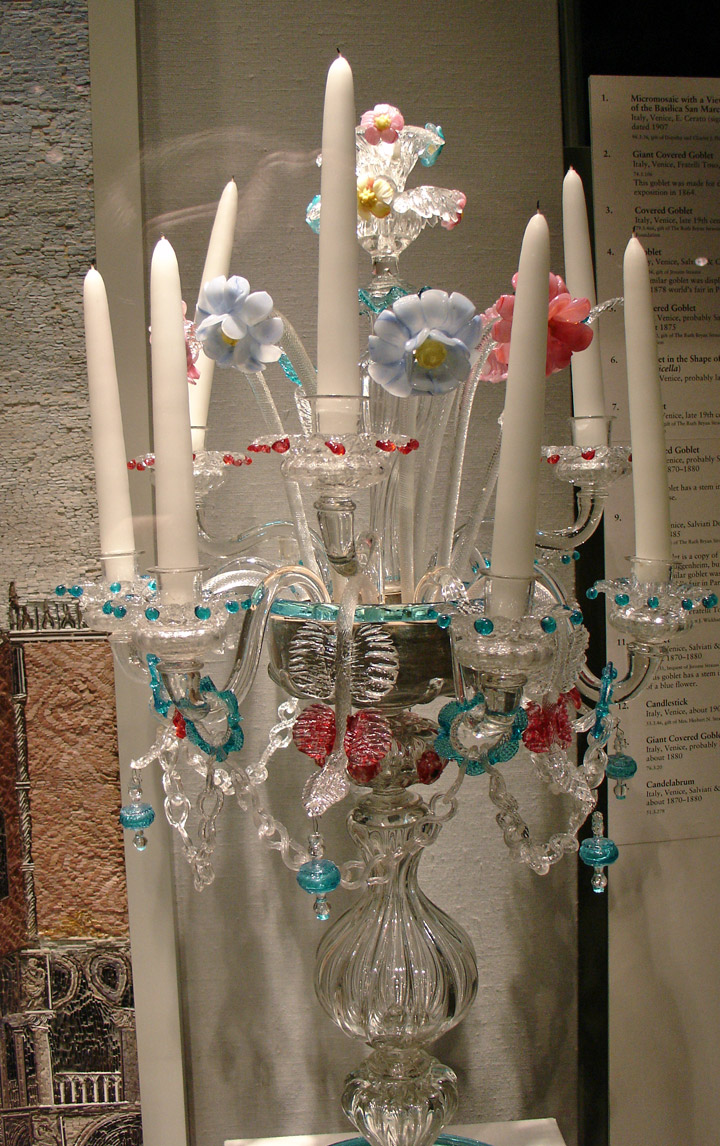 The Studio Glass movement, the last and most energetic art glass movement of the 20th century, is the focus of this gallery. It features vessels, objects, sculpture, stained glass, furniture, and lighting that date from the late 1960s to the early 1990s. 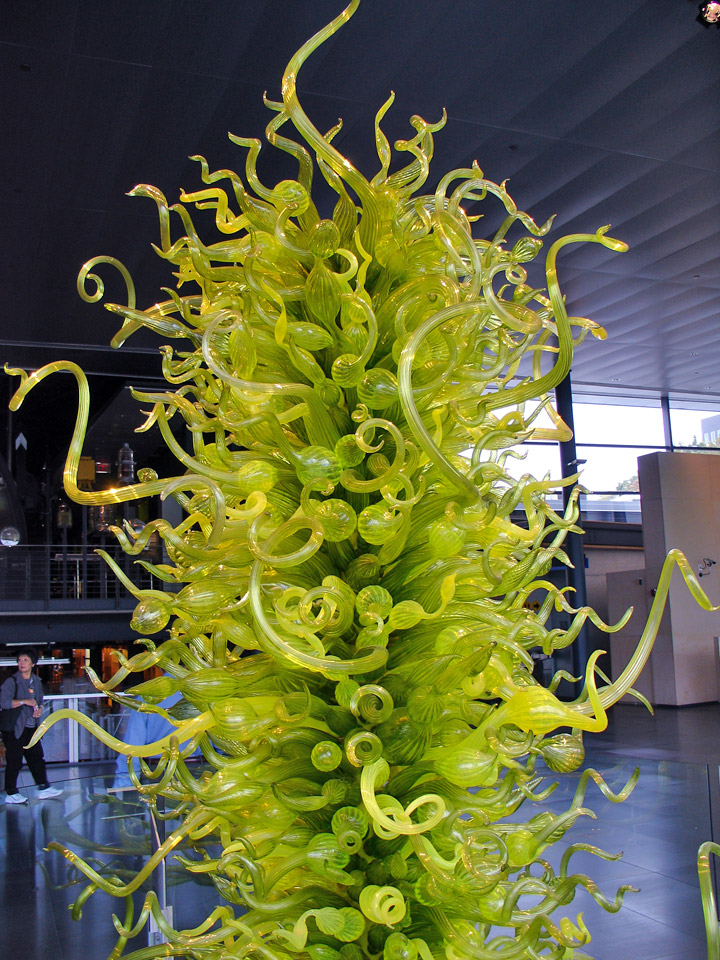 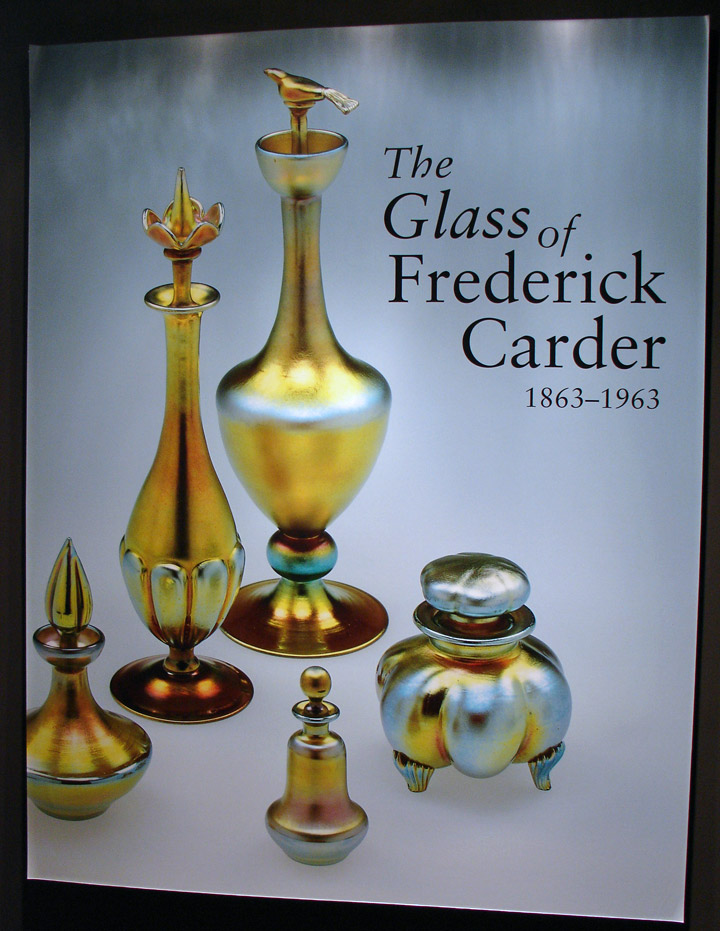 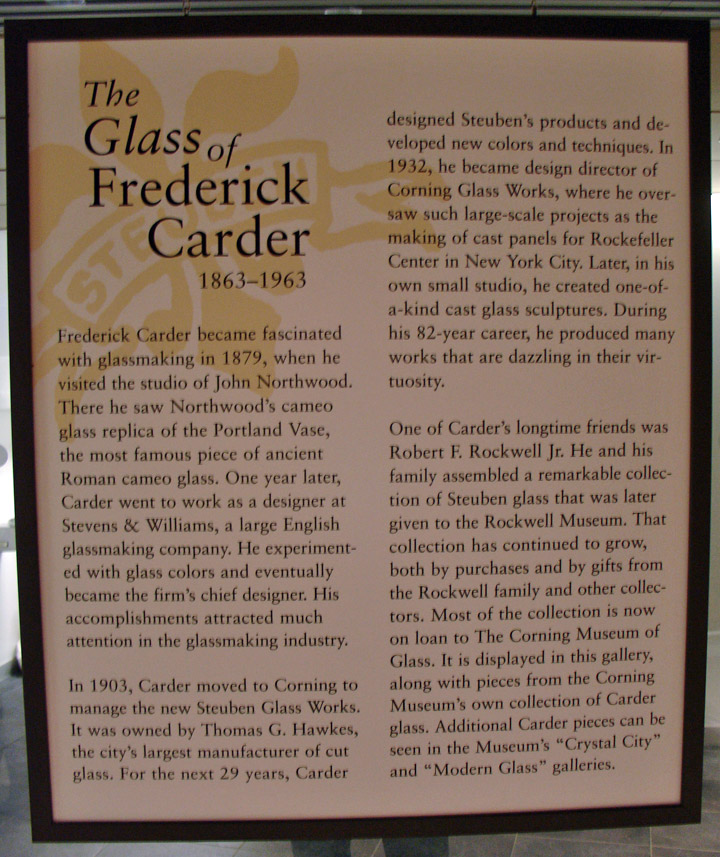 Frederick Carder's distinguished career in glassmaking extended from 1880 to the 1950s. The Carder Gallery displays his early pieces made at the English firm of Stevens & Williams, many of the objects he designed when he managed Steuben Glass Works between 1903 and 1933, and some works he created in his later years. 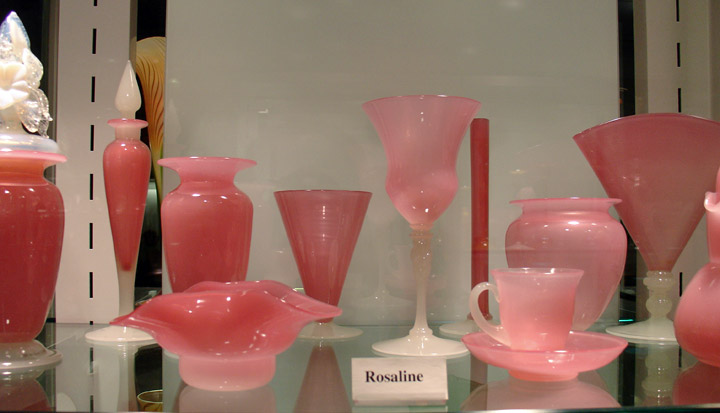 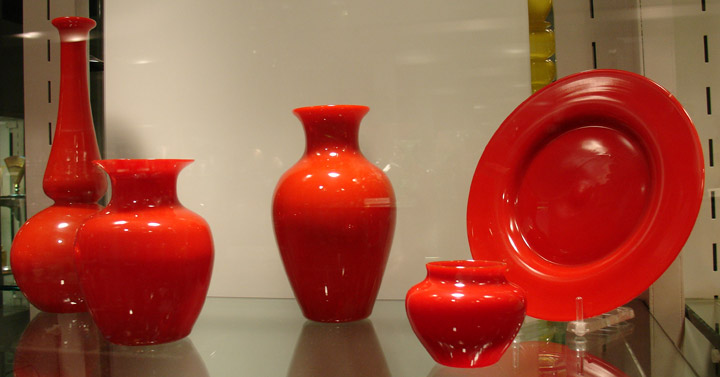 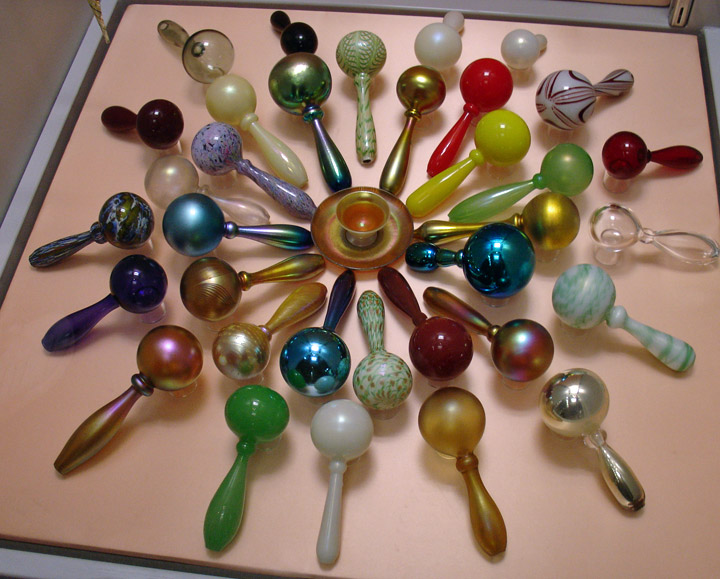 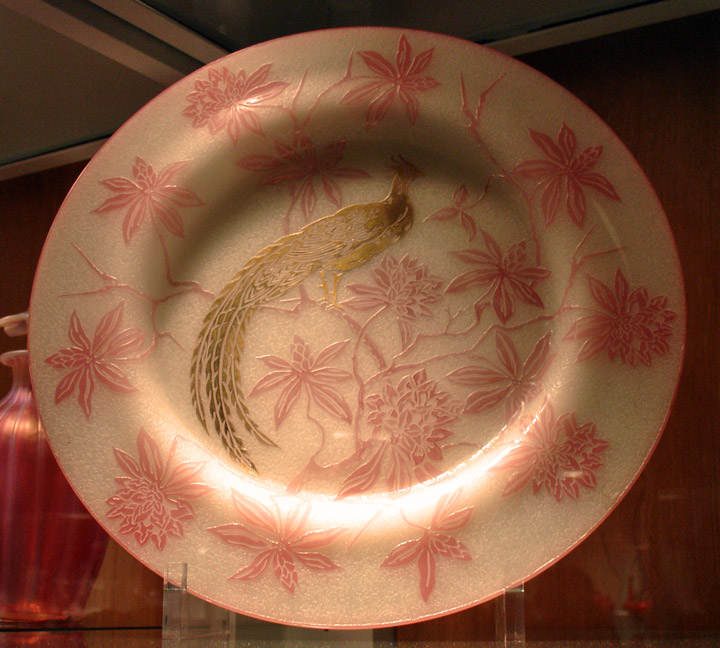 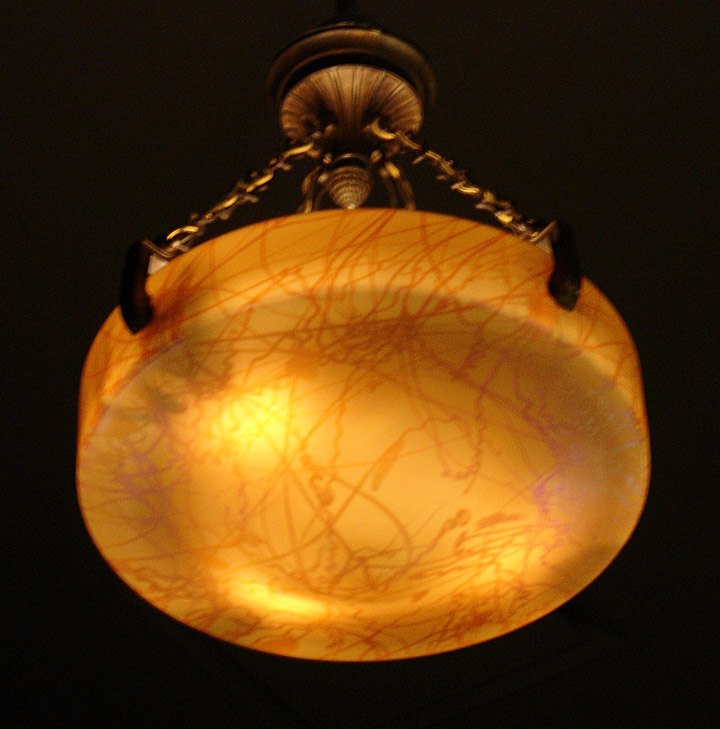 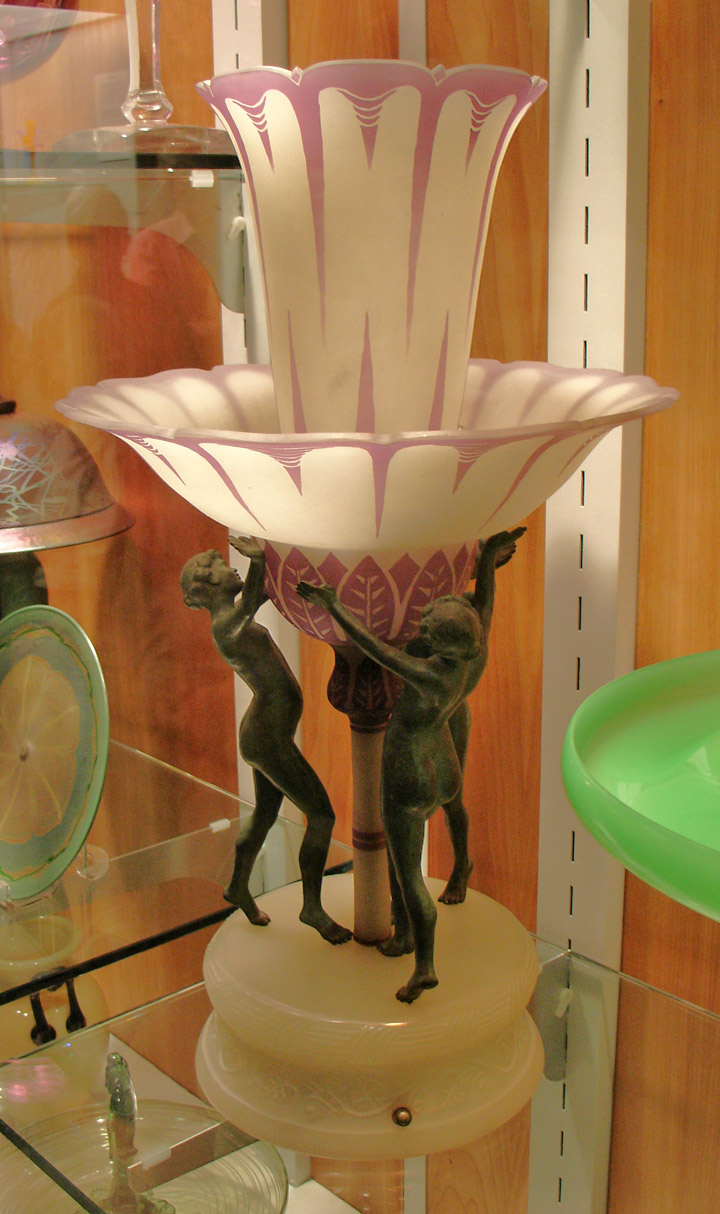 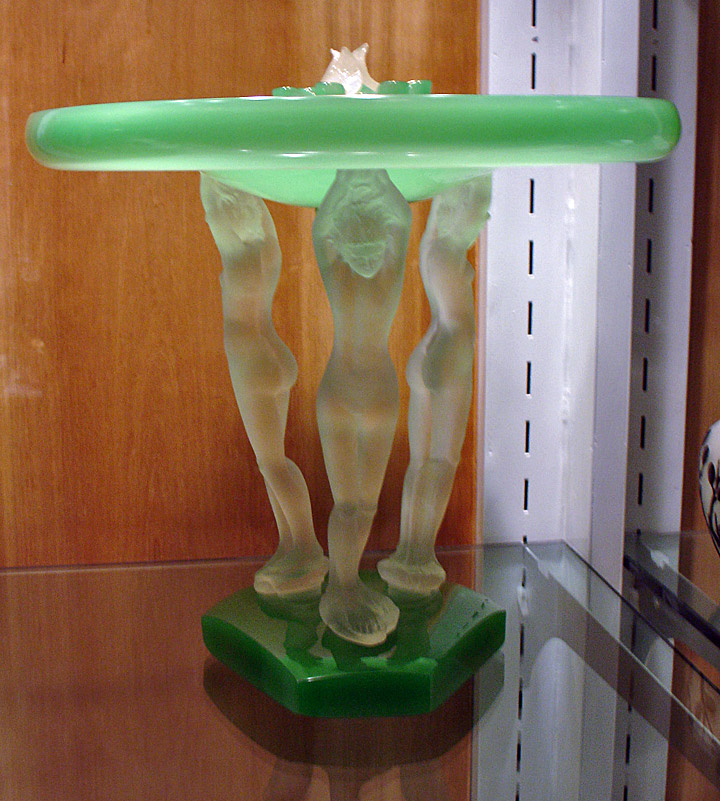 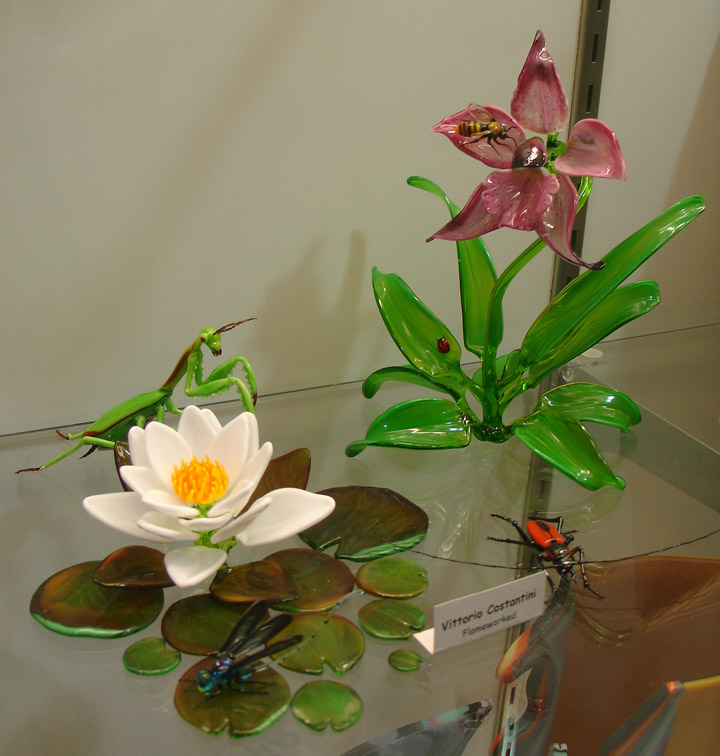