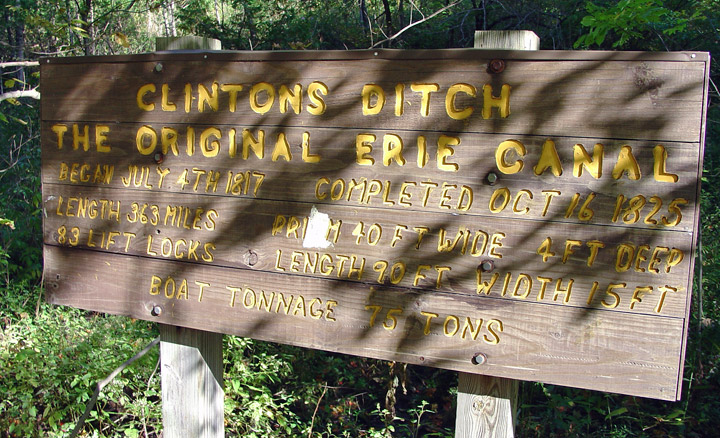 Erie Canal, artificial inland waterway that extends from Lake Erie, at Buffalo, New York, to the Hudson River, near Albany, New York. The Erie Canal forms a branch of the New York State Canal System, a network of canals established in 1903. 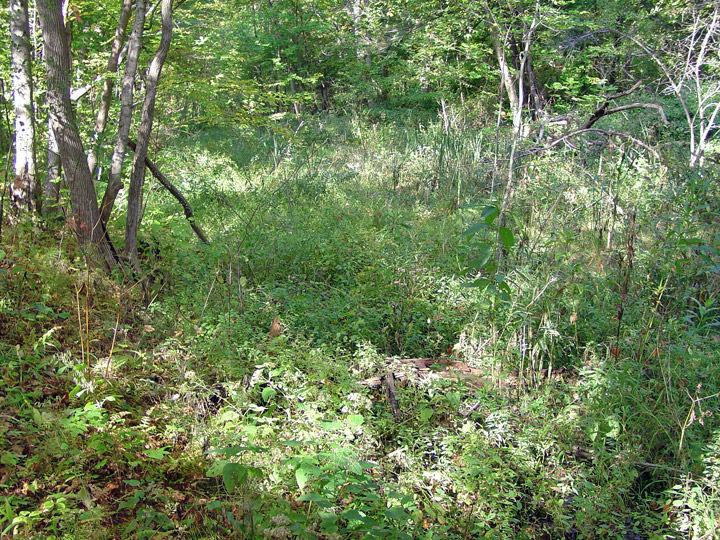 the abandoned original canal as it looks today
overgrown with shrubbery

Plans for a waterway that would link the Great Lakes with the eastern seaboard were developed as early as 1783, but the projected waterway received little popular support. A group of prominent New York citizens, led by De Witt Clinton, made repeated efforts between 1810 and 1816 to obtain federal financing for a canal linking the Hudson River and Lake Erie. As a result of their failure to secure federal help, the supporters of the project proposed that the state of New York finance the canal. 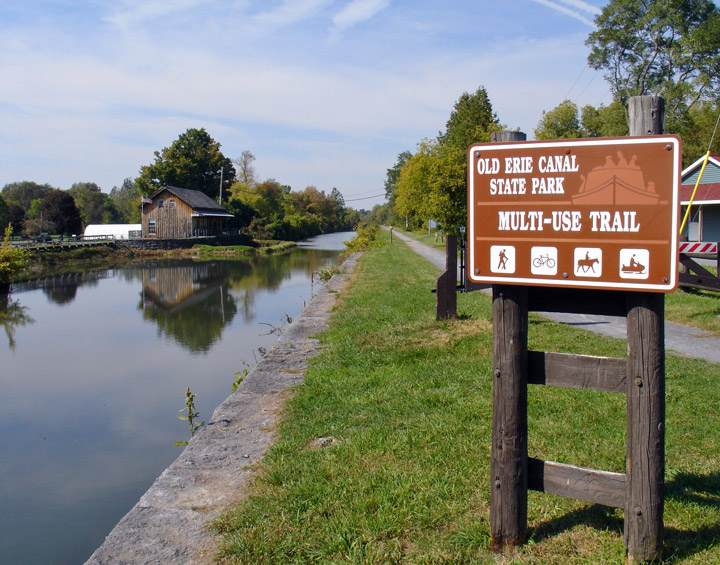 restored portion of the original canal at Chittenango Landing

This proposal became the principal issue in the gubernatorial contest of 1817, with Clinton campaigning as the pro-canal candidate. On July 4, 1817, following the election of Clinton and his inauguration as governor, work on the project began in Rome, New York. A section of the canal, extending from Rome to Utica, was opened to navigation in 1819, and Seneca Lake was reached the following year. The waterway was completed in 1825, and on October 26 of that year the canal boat Seneca Chief set out on a trip from Buffalo to New York City. It arrived on November 4, occasioning an elaborate celebration, the climax of which was the dumping of a barrel of Lake Erie water into the Atlantic Ocean. 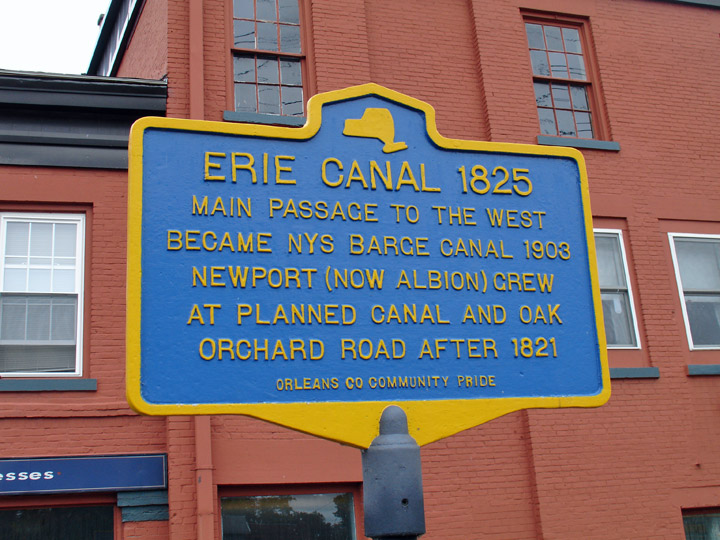 the canal at Albion
the canal created the town 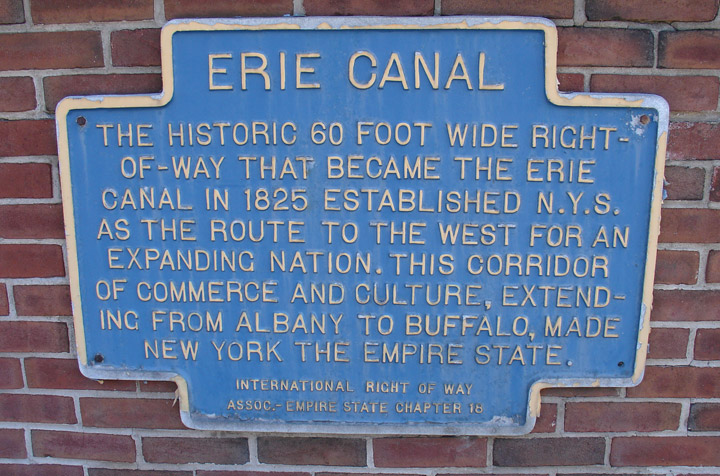 The canal was originally 547 km (340 mi) long, about 12 m (about 40 ft) wide at the surface, 8.5 m (28 ft) wide at the bottom, and 1.2 m (4 ft) deep. Eighty-two locks provided a lift of 210 m (689 ft). A 188-km (117-mi) section of the canal was constructed alongside the Mohawk River. Most of this section has been largely abandoned since then and replaced by the river itself. Shortly after the completion of the canal, light packet boats, drawn by frequent relays of horses driven at a trot along the towpath, were making the trip between the Hudson River and Buffalo in three and a half days. The cost of construction, about $7,144,000, and maintenance costs were defrayed by the collection of tolls. These were abolished in 1882. 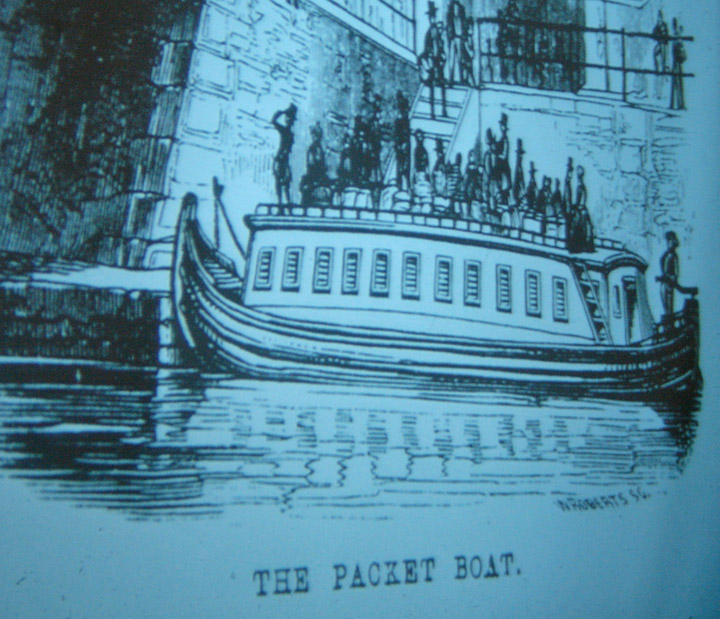 Packet Boat for the transportation of people

Completion of the Erie Canal inaugurated a new era in the growth of New York City, Buffalo, and numerous other communities of New York State. With the increase in goods and capital, New York City cemented its role as the leading financial and commercial center in the nation, surpassing other eastern cities such as Boston and Philadelphia. Partly due to the canal, the population of New York City grew from 123,706 in 1820 to 696,115 in 1850. 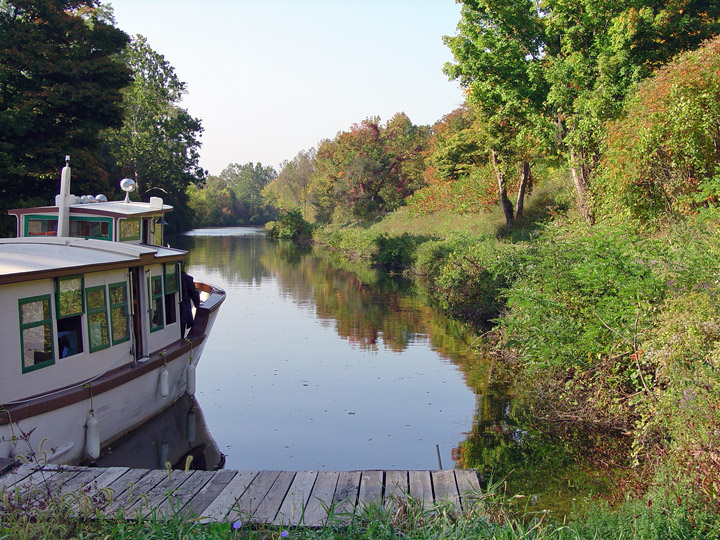 Large areas within and outside of the state were opened up for settlement. The success of the Erie Canal and the corresponding economic threat it posed to other states inspired the construction of other new canals, such as the Pennsylvania Canal (opened in 1834), linking Pittsburgh and Philadelphia. For many years, however, the Erie Canal served as the chief traffic artery, for both passengers and freight traveling between the Northeast and what was then the West. 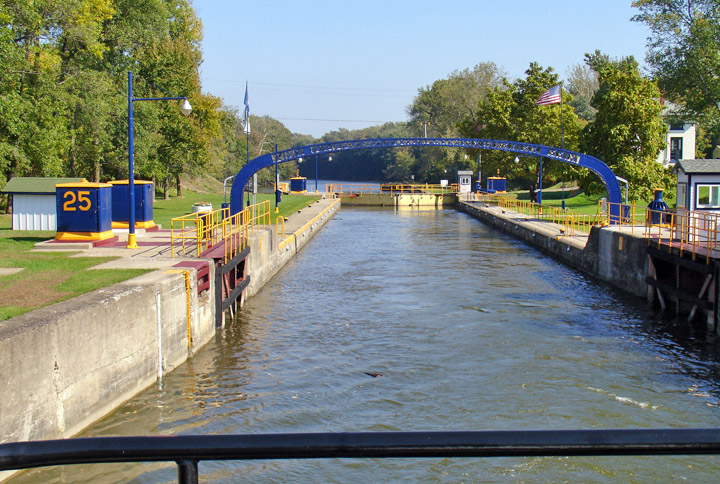 Lock # 25 on the present Erie Canal

More Photos of the Locks

Beginning about the middle of the 19th century, however, railroad competition steadily reduced the commercial importance of the Erie Canal. Extensive improvements, designed mainly to increase the depth to 2.1 m (7 ft) and the width to 21.3 m (70 ft), were completed in 1862. These and subsequent improvements, particularly those undertaken in connection with the establishment in 1903 of the New York State Canal System, made the canal the leading transportation route for grain shipments from the Midwest to New York City.
By the early 1980s the Erie Canal was a relatively minor commercial waterway, mainly because most waterborne freight traffic between the Great Lakes and the Atlantic were using the St. Lawrence Seaway. 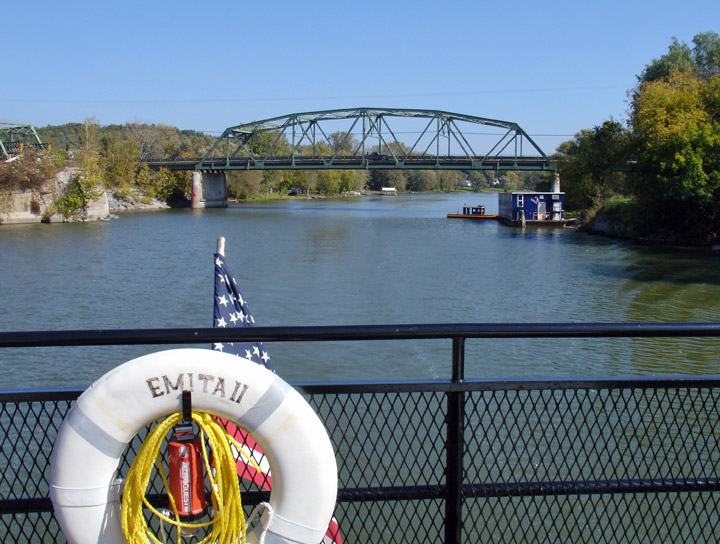 today's canal as seen from the deck of the Emita II

More Photos of the Emita II 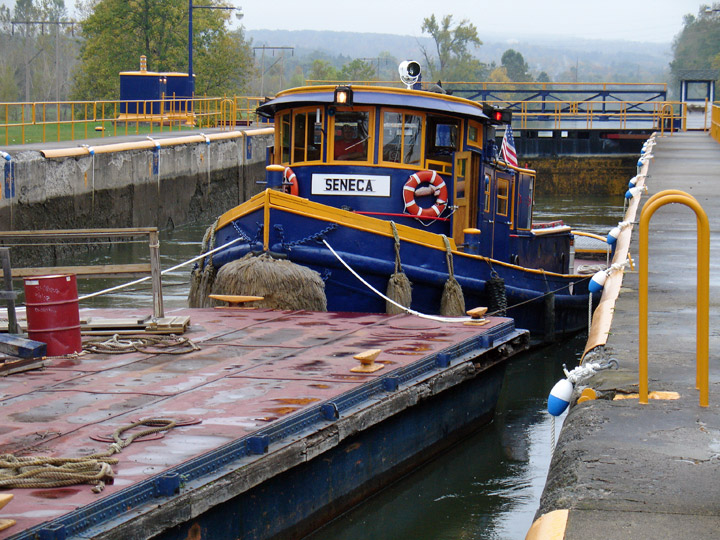 reminder of barges and tugs from the days before the St, Lawrence Seaway opening