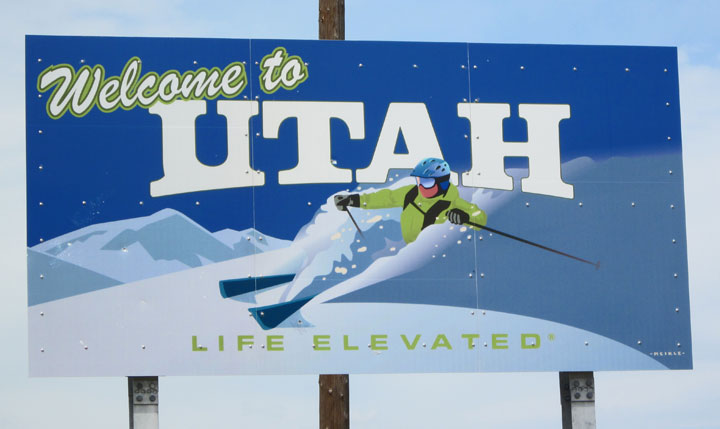 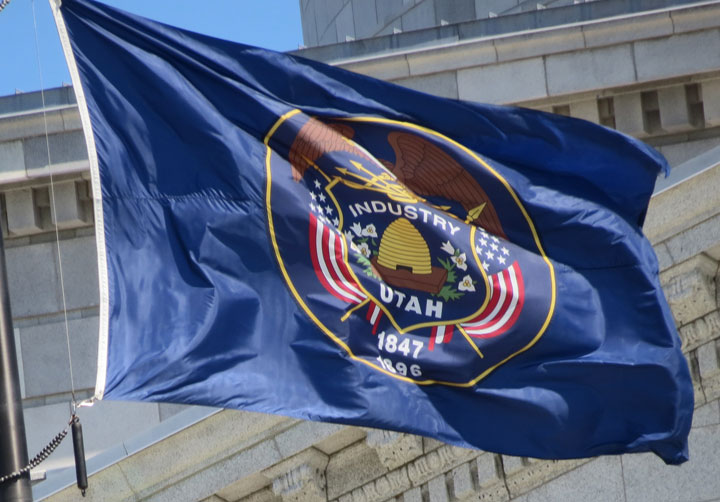 a farm scene in Northern Utah in June 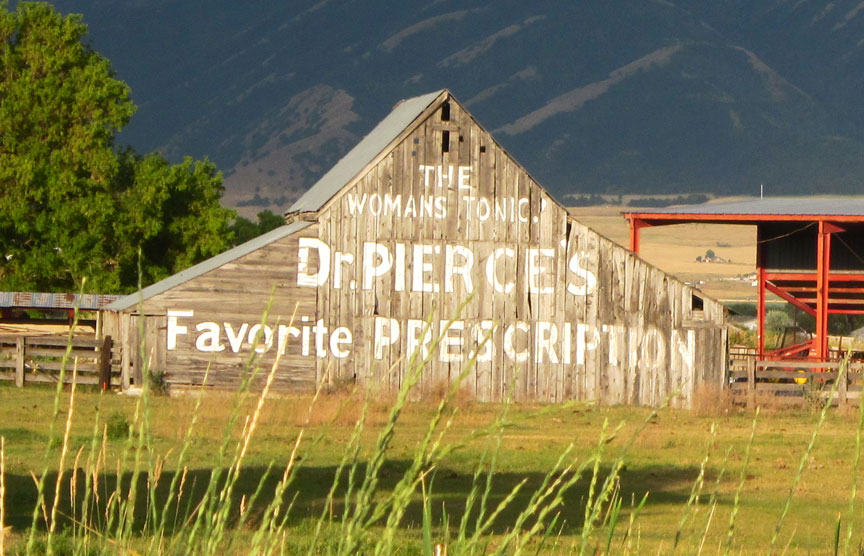 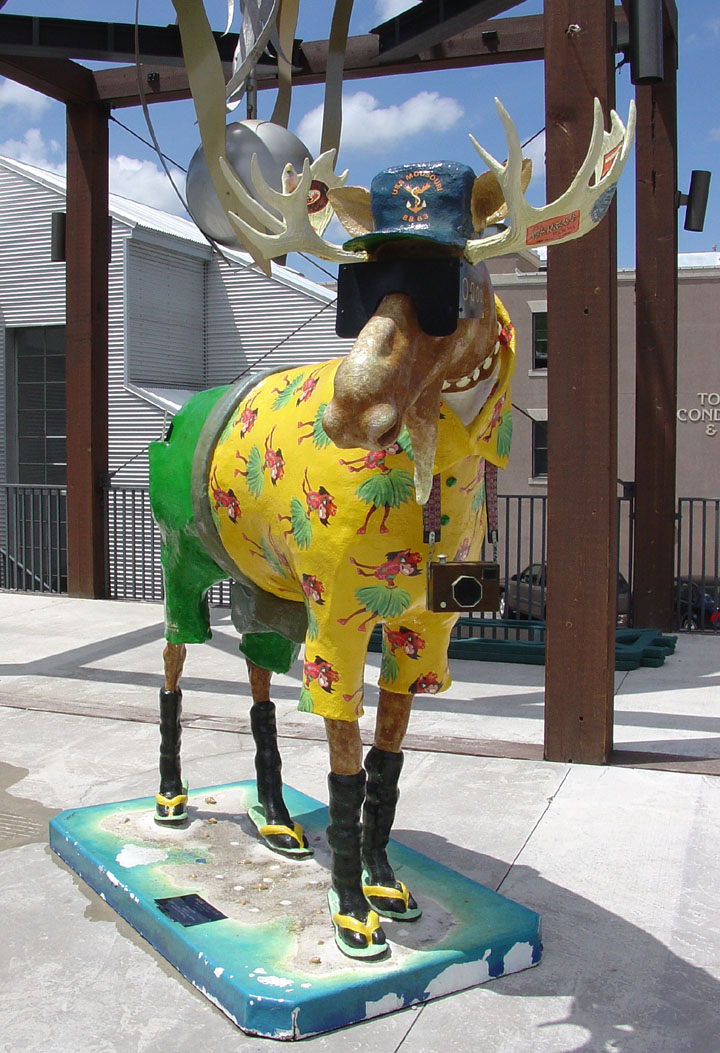 even the Moose are tourists in Park City 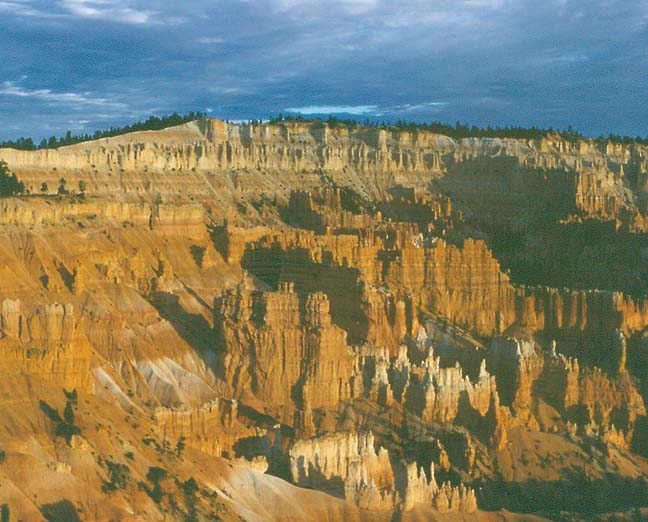 , southwestern Utah, established as a national monument 1923, as a national park 1928. It is famous for its unusual rock formations, among the most spectacular and vividly colored of any in the world. Set on the eastern rim of the Paunsaugunt Plateau, it consists of a series of horseshoe-shaped canyons, 300 m (1,000 ft) deep. 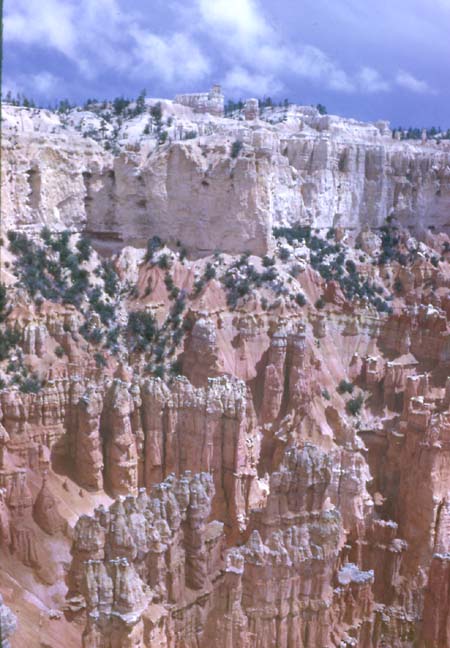 The sandstone walls of these canyons have been sculptured by erosion, and spires and pinnacles are common. The rock strata offer differing resistance to the elements and are variously colored pink, white, orange, and red. Area, 14,502 hectares (35,835 acres). 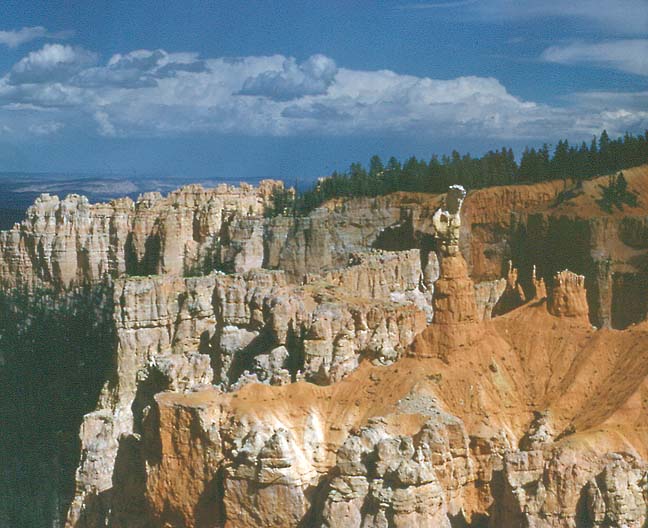 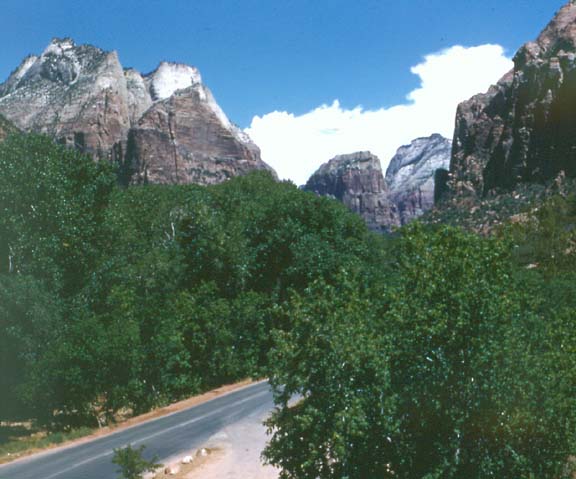 , national park established in 1919, originally Mukuntuweap National Monument proclaimed in 1909. Located in southwestern Utah, the park preserves a scenic area of colorful canyons, mesas, and cliffs. The most prominent feature is Zion Canyon, a narrow chasm cut by the Virgin River. Early inhabitants of this region include the Anasazi, ancestors of today’s Pueblo people. The Anasazi lived in the region until the 12th century AD. The Paiute Native Americans who followed called the area Mukuntuweap. Mormons settled in Zion Canyon during the 1860s and named the canyon lands Zion.

The canyons along the north and east forks of the Virgin River dominate the park. Scenic roads run through the park, and numerous trails lead to such prominent physical features as Weeping Rock, Three Patriarchs, Angels Landing, The Great White Throne, Checkerboard Mesa, Hurricane Cliffs, and the Temple of Sinawava. Zion Canyon is the most accessible canyon; its walls tower 600 to 900 m (2,000 to 3,000 ft) above the river. Zion Canyon Scenic Drive goes north through this canyon to the Temple of Sinawava. The Narrows is a 26-km (16-mi) long stretch of the canyon that is only 6 m (20 ft) wide in parts. The Zion-Mount Carmel Highway runs east through the southern portion of the park. The road was completed in 1930 and passes through two tunnels cut through the cliffs. Openings in the tunnel walls provide excellent views of the canyon.

The Kolob Canyons, located in the northwest part of the park, feature high plateaus and sandstone cliffs. Kolob is a name that Mormons took from the Bible. The Kolob Terrace Road and the Kolob Canyons Road both go to the canyons. A prominent feature in the Kolob Canyons is Kolob Arch, which spans 94 m (310 ft) and is considered the largest freestanding arch in the world. Vegetation in the park varies from cottonwoods, cacti, and sagebrush at the lower elevations to pine, fir, and juniper at the higher elevations. Wildlife includes mule deer, bighorn sheep, and mountain lions. There are more than 270 species of birds in the park, including golden eagles, Gambel’s quails, roadrunners, and American dippers. Administered by the National Park Service. Area, 59,326 hectares (146,598 acres). 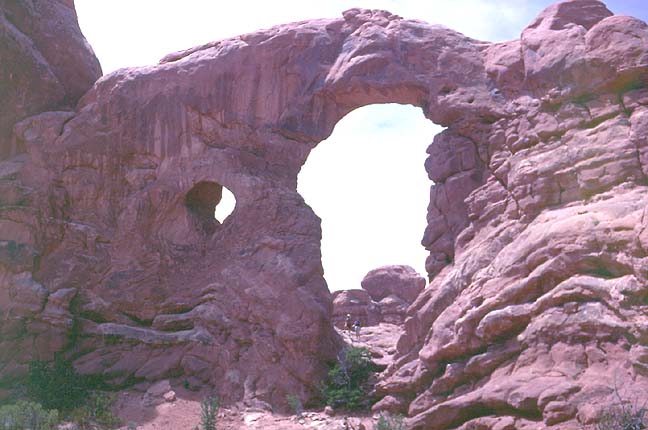 , southeastern Utah, near Moab, established as a national monument in 1929, as a national park in 1971. The park consists of a desert region remarkable for its natural rock formations. The reddish sandstone has been eroded into fantastic sculptures, such as pinnacles, pedestals, windows, and giant arches. Of the more than 90 natural arches in the park, Landscape Arch is the largest, with a span of 93 m (306 ft) and a height of about 30 m (about 100 ft). Area, 29,695 hectares (73,379 acres). 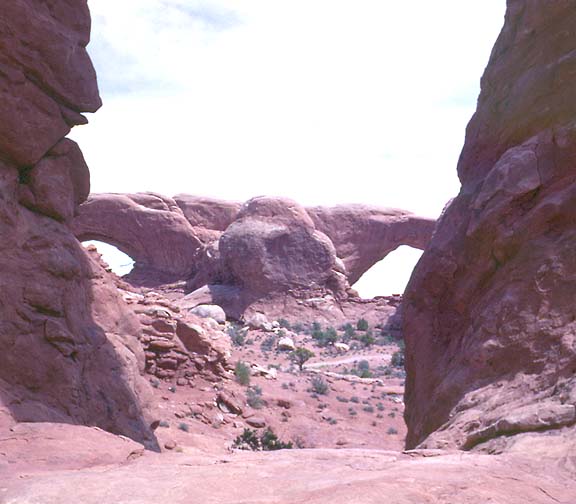 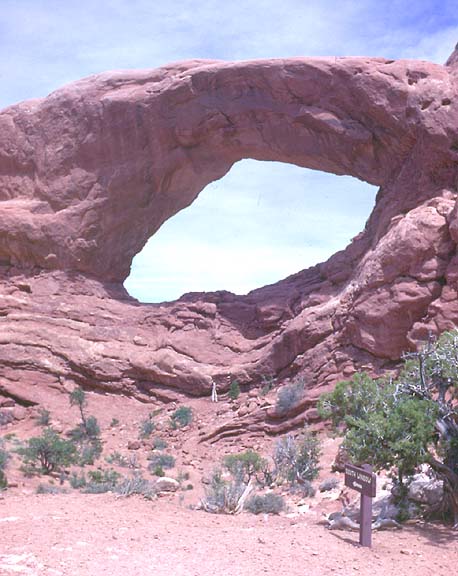 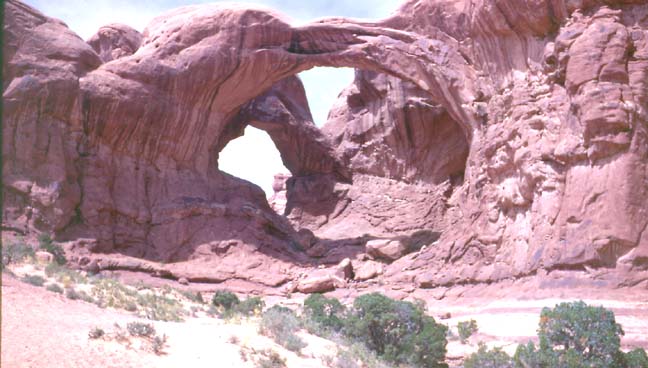 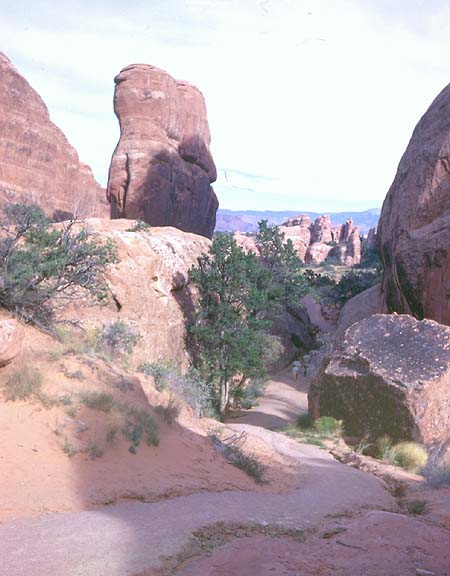 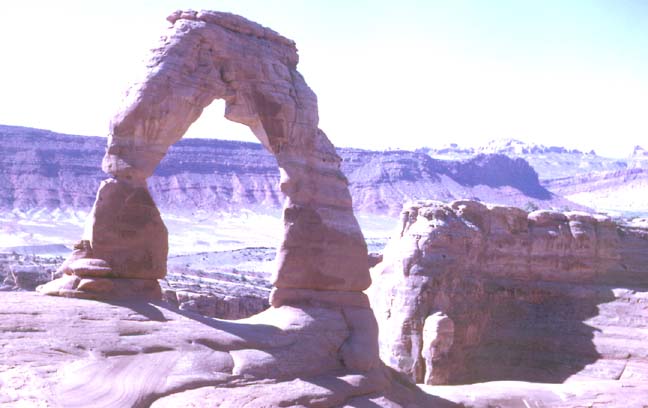 , southeastern Utah, established 1964. The park is located in a scenic desert region surrounding the confluence of the Green and Colorado rivers. Each river passes through deep, winding gorges; the most dramatic is Cataract Canyon below the rivers’ junction. 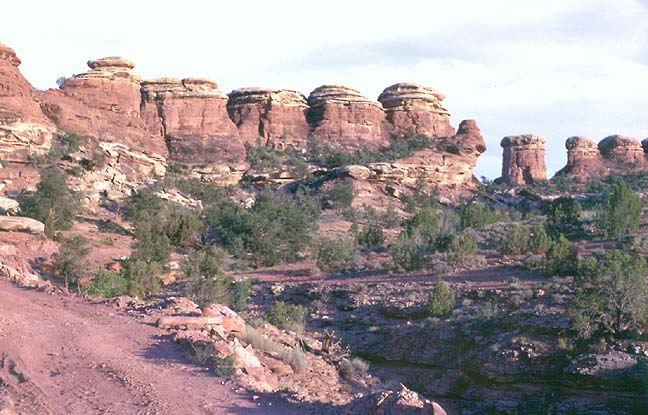 Here, erosion has produced monumental formations in the red and white sandstone, with spires and pillars up to 90 m (300 ft). 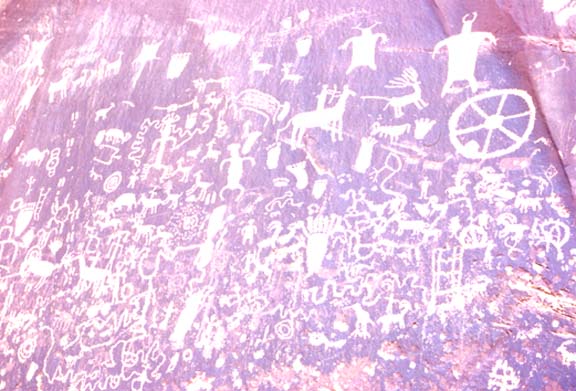 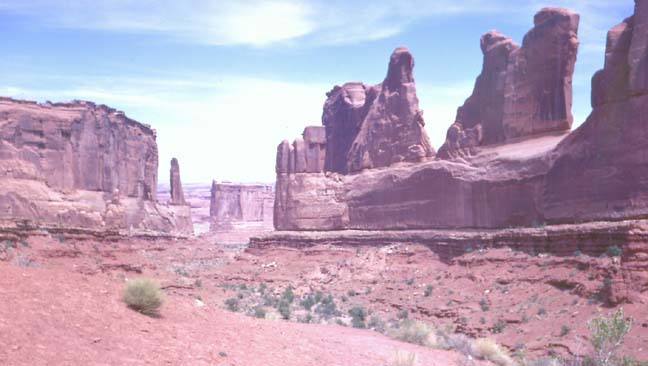