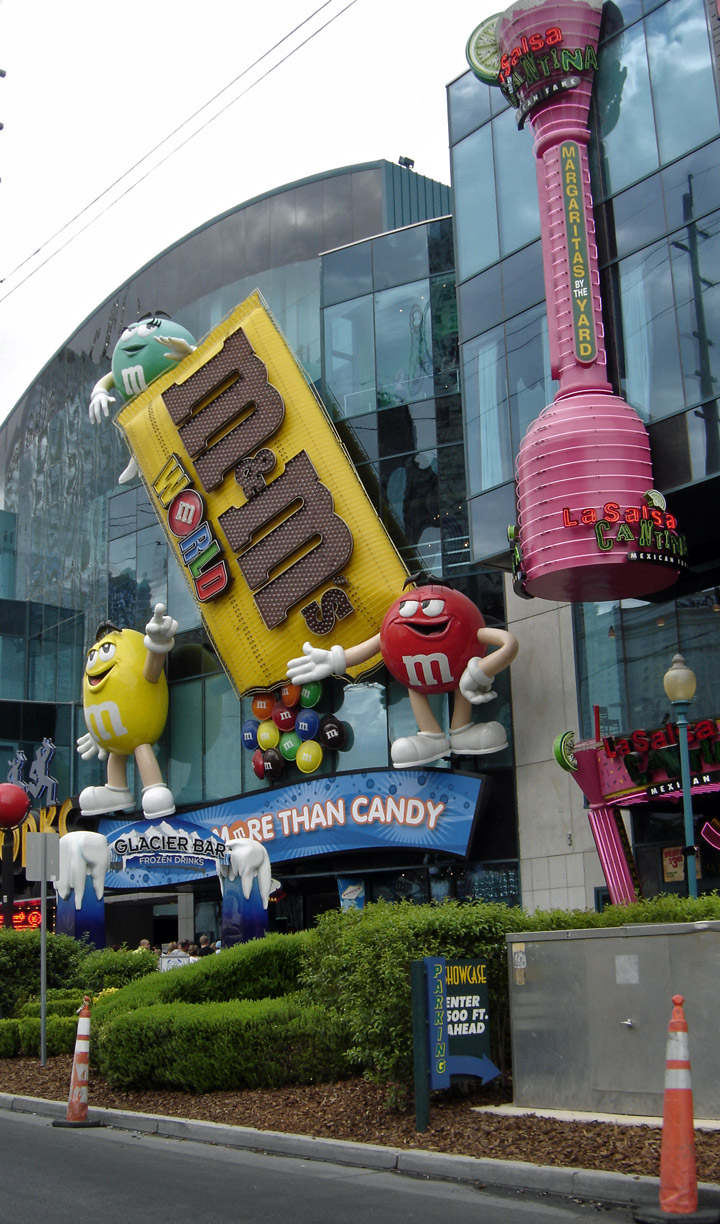 M&M's World is a store that specializes in everything from M&M's Candy to M&M's clothing. The most famous location is in the Las Vegas Strip in Paradise, Nevada. 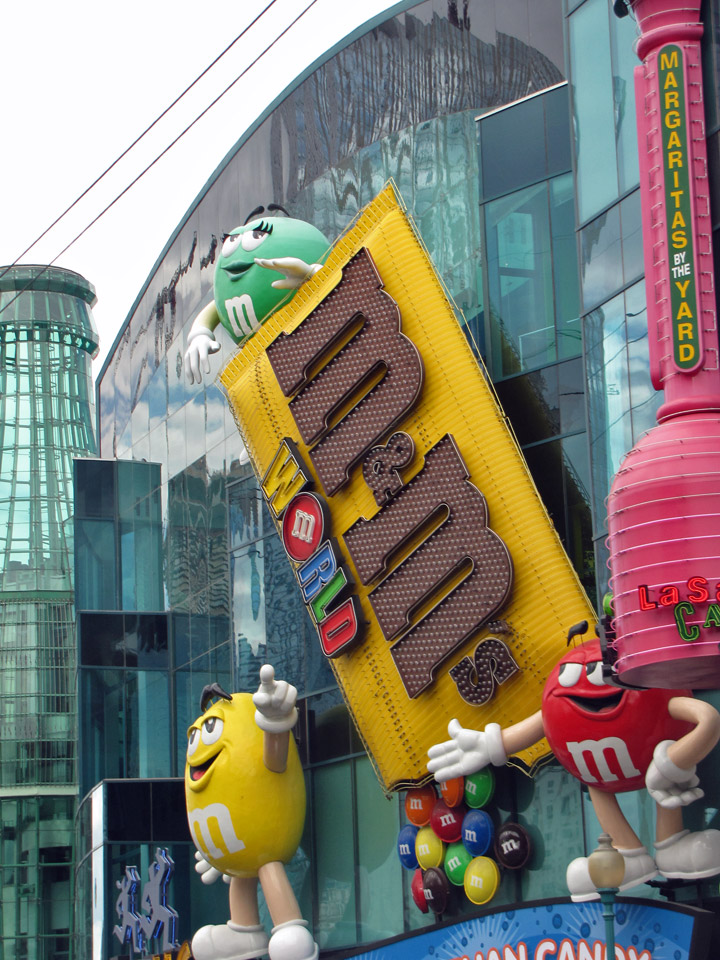 The first location opened in Las Vegas in 1997, in the Showcase Mall next to the MGM Grand. The four-story M&M's World includes a gift shop on the first floor. The shop leads to a 3D movie theater. Also on display are M&M's in nearly every color, and a replica of the M&M's race car that is driven in the NASCAR Sprint Cup series. M&M's clothing is sold on the second floor and on the stairs that go up to the second floor are pictures showing how the M&M characters have evolved over the years painted on the wall. 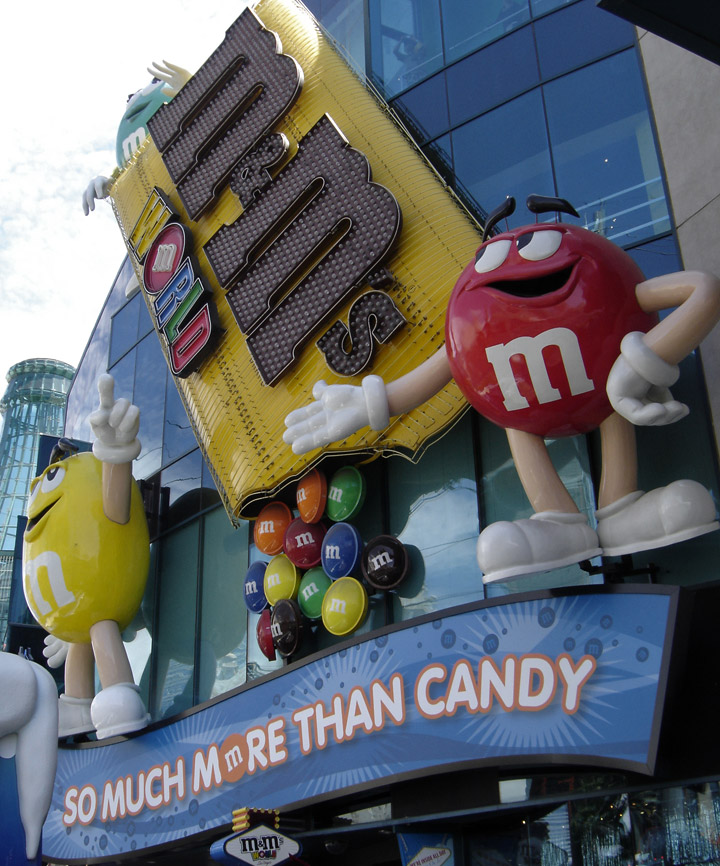 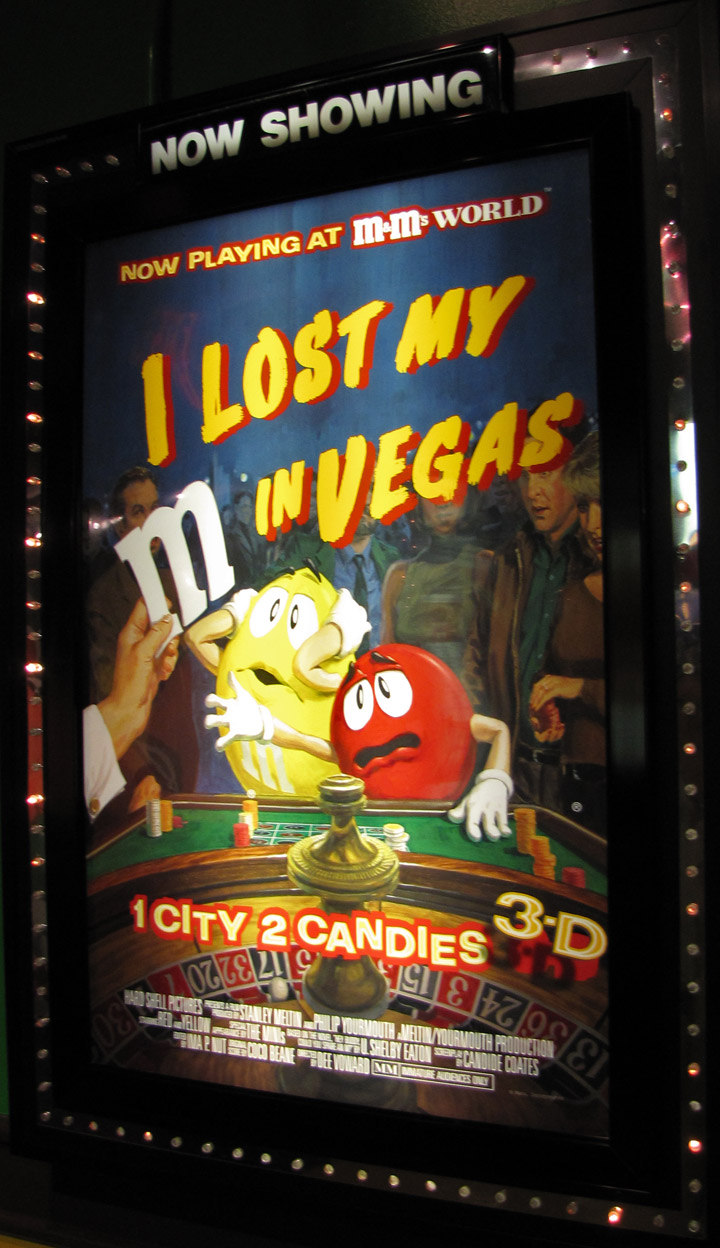 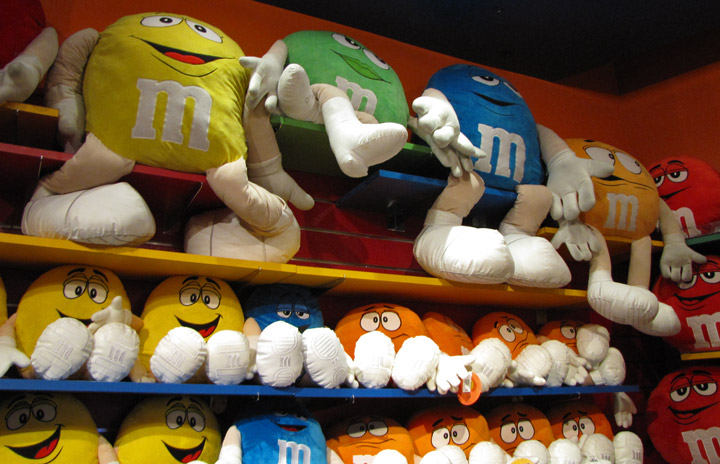 M&M's are candy-coated pieces of milk chocolate with the letter "m" printed on them, produced by Mars, Incorporated. Popular in the United States and many other countries, several variations of the candies exist, including plain milk chocolate, peanut, peanut butter, mint, dark chocolate (with and without peanuts), and almond. Not all of these varieties are available worldwide however. First produced in 1941, the candies were originally manufactured in brown, yellow, orange, red, green, and violet. Tan replaced violet in 1949. Blue replaced tan in 1995.

Forrest Mars, Sr., founder of the Mars Company, got the idea for the confection in the 1930s during the Spanish Civil War when he saw soldiers eating chocolate pellets with a hard shell surrounding the inside, preventing them from melting. Mars received a patent for his own process on March 3, 1941. Production began in 1941 in a factory located at 285 Badger Avenue in Clinton Hill, Newark, New Jersey. One M was for Forrest E. Mars Sr., and the other M was for Bruce Murrie, son of long-term Hershey president William F.R. Murrie. Murrie had 20 percent interest in the product. The arrangement allowed the candies to be made with Hershey chocolate which had control of the rationed chocolate. When operations were started, the hard-coated chocolates were made in seven different colors: blue, brown, yellow, orange, red, green and violet. They were served in a cardboard tube (similar to Smarties). 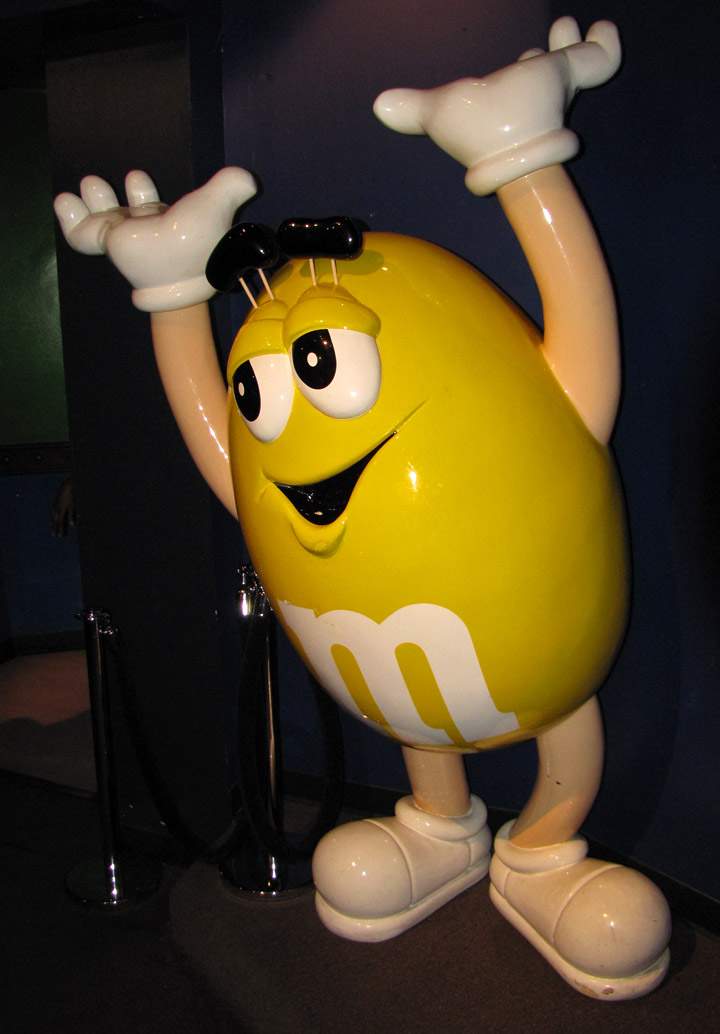 The practicality of the candies during World War II caused an increase in production and its factory moved to bigger quarters at 200 North 12th Street in Newark, New Jersey where they remained until 1958 when it moved to a bigger factory at Hackettstown, New Jersey. During the War the candies were exclusively sold to the military.y.

In 1948 the cardboard packaging was replaced by the black cellophane packaging. In the same year Mars bought out Murrie's 20 percent stake. 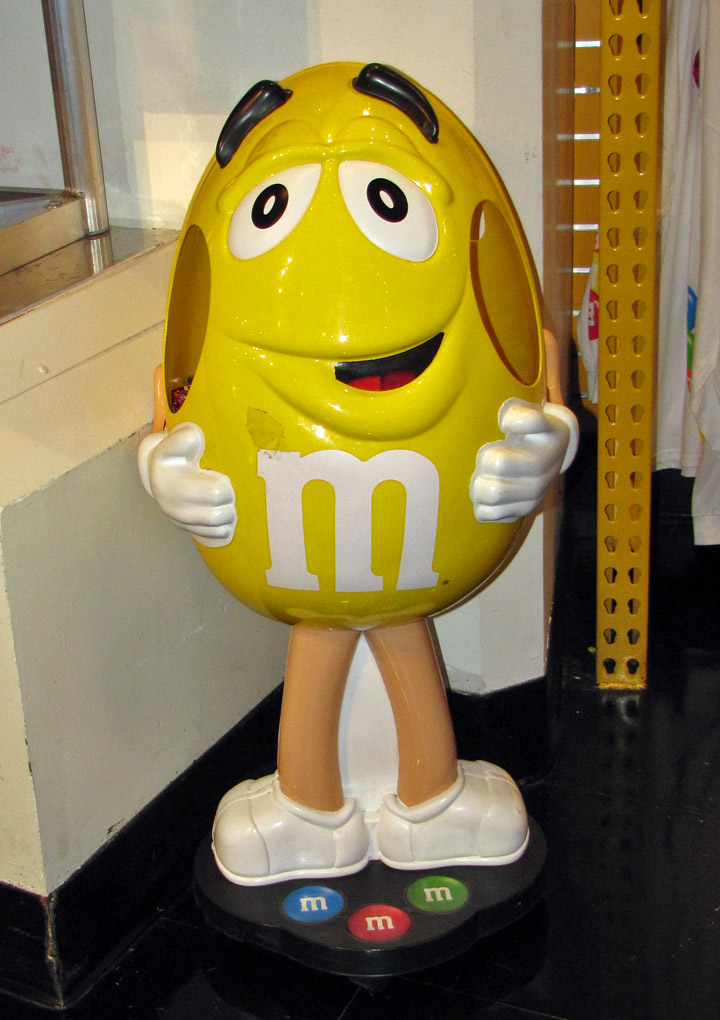 In the early 1950s, the Midwest Research Institute in Kansas City, Missouri, working for M&M's, perfected a process whereby 3,300 pounds of chocolate centers could be coated every hour.

In 1954, Peanut Chocolate Candies were introduced, while the M&M's brand characters and the famous slogan "The milk chocolate that melts in your mouth, not in your hand" were both trademarked. 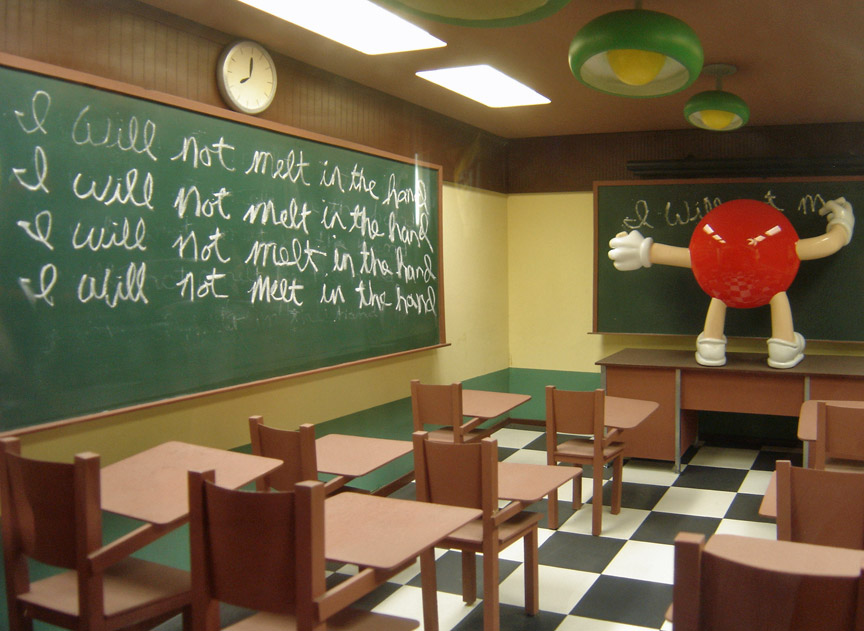 must get it right

Red candies were eliminated in 1976 due to health concerns over the dye amaranth (FD&C Red #2), which was a suspected carcinogen, and were replaced with orange-colored candies (this despite the fact that M&M's did not contain the dye; the action was purely to satisfy worried consumers). By 1987, the public had forgotten the scare, and the red candies were reintroduced, but they also kept the orange colored M&M's. They currently contain Allura Red AC (FD&C Red #40, E129). In Europe, Allura Red AC (E129) is not recommended for consumption by children. It is banned in Denmark, Belgium, France, Germany, Switzerland, Sweden, Austria, and Norway. Instead, Cochineal (E120) is used in the red shells.

In 1988, Almond M&M's hit stores with limited release, with appearances only during Christmas and Easter times. These candies are much like the peanut variety, but with an almond instead of a peanut inside the candy. Due to rising popularity, Mars gave them full releases in 1992. 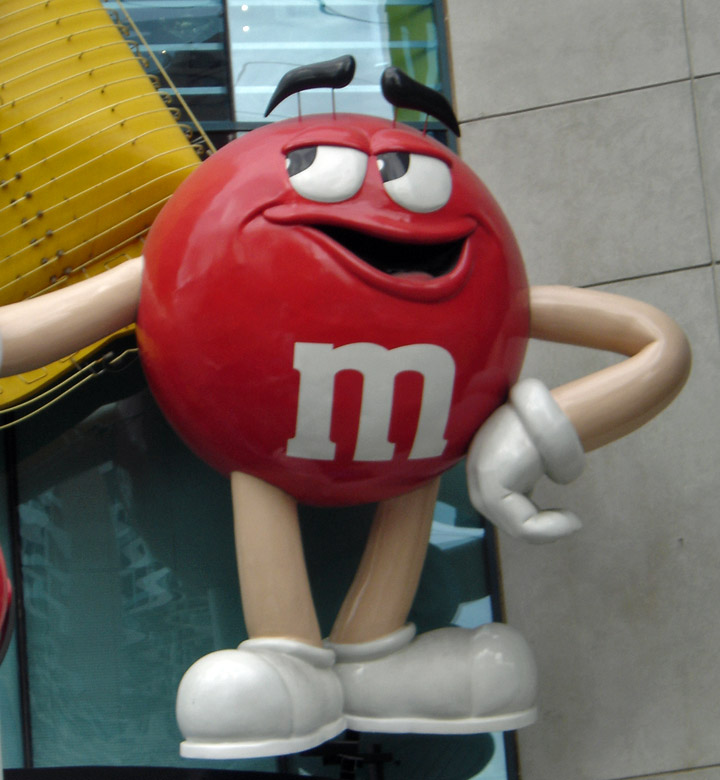 In 1990, Peanut Butter M&M's were released. These candies have peanut butter inside the chocolate center and the same color scheme as the other brands.

In 1995, Mars ran a promotion in which consumers were invited to vote on which of blue, pink, or purple would be introduced. Blue was the winner, replacing tan in early 1995. Consumers could vote by calling 1-800-FUN-COLOR. (The introduction of blue M&M's to Australia in 1997 was controversially promoted by the Carlton Football Club of the AFL who swapped their trademark dark blue guernseys for pale blue guernseys -- their first change since the early 20th century.) 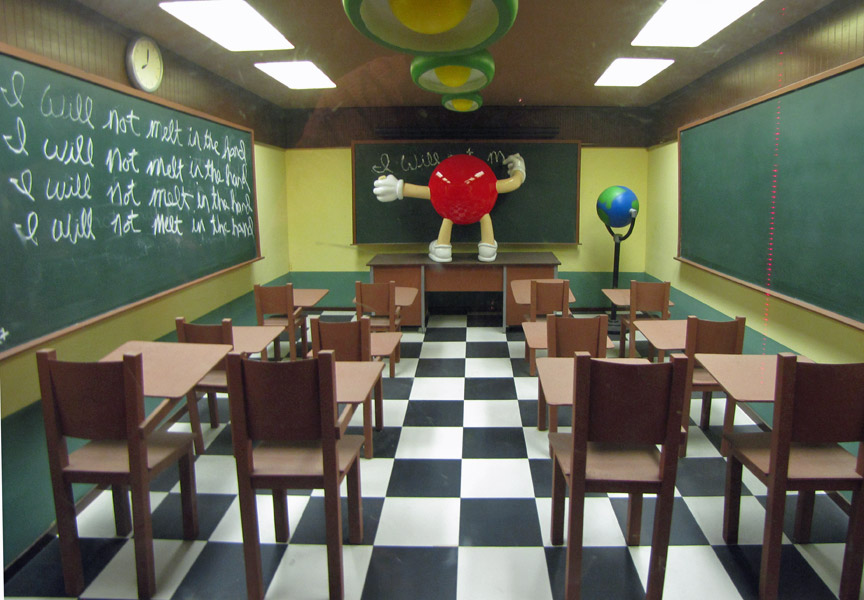 still trying to get it right

Around the same time, novelty M&M's were available in specialty stores, such as FAO Schwarz, in 21 different colors.

In 1996, Mars introduced a new M&M's candy: the "M&M's Minis". These candies are very small and are usually sold in small plastic tubes instead of bags. A video game, M&M's: The Lost Formulas, was also eventually released, based on this candy. 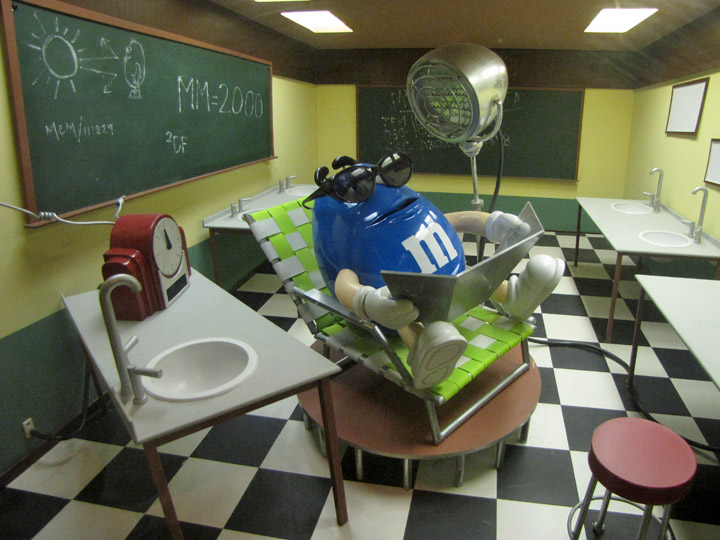 In 1999, Crispy M&M's were released. They were slightly larger than the milk chocolate variety and featured a crispy rice center. They were discontinued in the United States in 2005, but they are still available in Europe, Australasia, and southeast Asia.

In 2002, Mars solicited votes to add a new color from three choices. Once again, the general public were the voters. The choices were aqua, pink, and purple. This time, purple won. 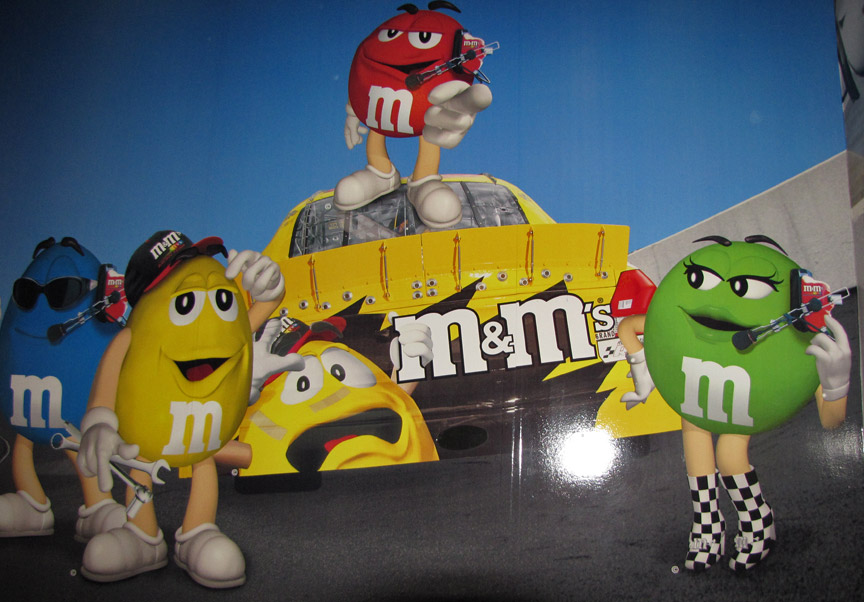 In June 2004, M&M's were mentioned in the media when Mike Melvill, who flew a weightless suborbital arc in SpaceShipOne, the world's first private piloted space flight, opened up a package of the chocolate brand when he reached the border of space (100km) in order to demonstrate weightlessness as the candy floated in the cabin. Melvill chose the candies because they were both colorful, therefore showing up well on camera, and because once gravity returned, if they fell into any of the controls they could be easily crushed and not interfere with the mechanisms. Melvill never told his bosses about his unauthorized stunt.

Also in 2004, My M&M's opened its web site doors (http://www.mymms.com). People could come to the site and have messages printed on M&M's with their choice of 2 colors. In the time since, they have expanded the site to handle many gifting options and business to business orders, allowing companies to upload logos to be printed. 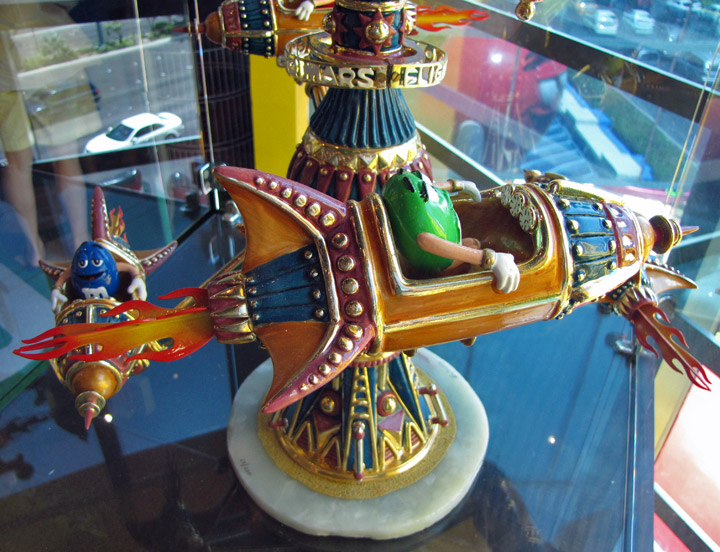 In April 2005, M&M's ran the "mPire" promotion to tie in with the Star Wars Episode III: Revenge of the Sith movie release. M&M's were offered in dark chocolate varieties (Regular and Peanut) for the first time.

In the summer of 2005, Mars added "Mega M&M's" to the lineup. These candies are 55% larger than the traditional M&M's and are available in milk chocolate and peanut varieties. Most of the colors for Mega M&M's were also changed to less-bright colors — teal (replacing green), beige (orange), maroon (red), gold (yellow), blue-gray (blue), and brown — to appeal more to adults. In the fall of 2005, the mPire promotion ran again to coincide with the DVD release of the Star Wars movie.
"My Color" Wall inside M&M's World Las Vegas Strip 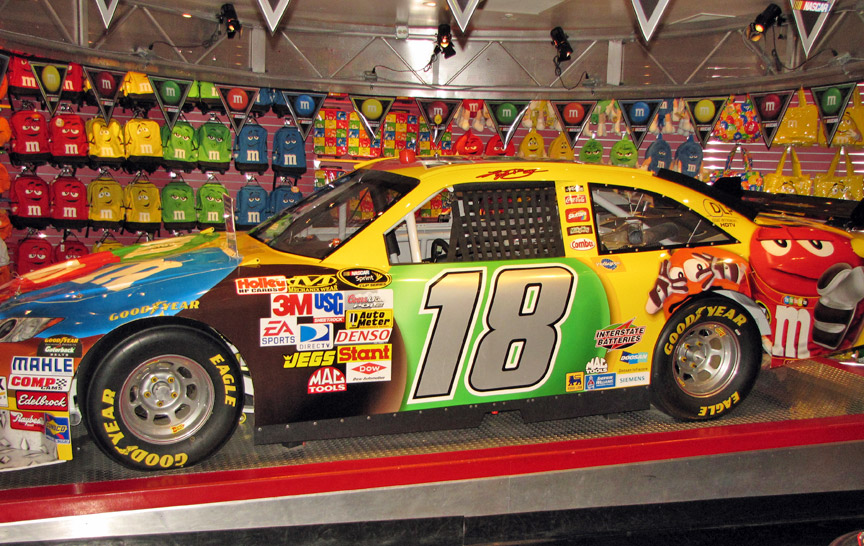 In 2006, Mars offered eight new flavors of M&M's via online sales, as well as at M&M's World locations. The flavors are "All That Razz"; "Eat, Drink, & Be Cherry"; "A Day at the Peach"; "Orange-U-Glad"; "Mint Condition"; "AlmonDeeLicious"; "Nut What You Think" and "Cookie Minster". The first five have a white chocolate and milk chocolate center with a flavored shell. The two nut flavors have an almond or peanut center with white chocolate and candy shell. "Cookie Minster" has a crispy center with dark chocolate and a mint flavored shell. The company also released a "Crispy Mint" variety in Australia. Also in July 2006, Dark Chocolate M&M's reappeared in a purple package with the green female M&M as the mascot. In 2006, the company also piloted White Chocolate M&M's as a tie-in with their Pirates of the Caribbean promotion.

Since 2005 M&M's have been available online in 17 colors, with personalized phrases on each candy on the opposite side from the "m". Released around Christmas, these custom-printed M&M's were originally intended for holiday greetings, but are now available all year round. In January 2009, 3 new colors were added to the list of printable colors: they are called the "Shimmer" collection. The colors in this collection have a pearlized finish, giving them a sparkling appearance. 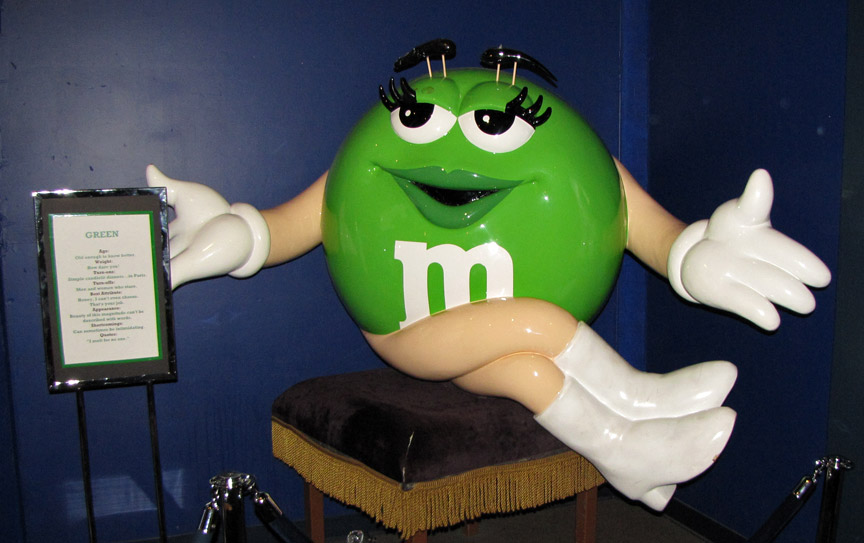 In 2007, M&M's introduced a new raspberry flavor chocolate candy that looks like the plain, but is fuchsia and slightly larger, called "M&M's Razzberry Chocolate Candies."

M&M's currently have recognizable "spokescandies" which appear in commercials: these include the team of the cynical and sardonic "Red" (originally Jon Lovitz, thereafter Billy West), who is the mascot for milk chocolate M&M's, and the happy and gullible "Yellow" (originally John Goodman, thereafter J.K. Simmons), who is the mascot for peanut M&M's. Other mascots include the "cool one", Blue (Robb Pruitt) for almond; the seductive Green (Cree Summer) for peanut butter, mint, and dark chocolate (Green is the only female M&M's mascot); and the slightly neurotic Orange (Eric Kirchberger) for other types of M&M's in general, who was initially not named after his color (for a time when he was introduced, he was known as Crispy due to his being a mascot for the now-discontinued Crispy M&M's, which debuted around the same time). These spokescandies debuted at the same time as the blue M&M's were added, replacing more kid-friendly and generic animated characters. 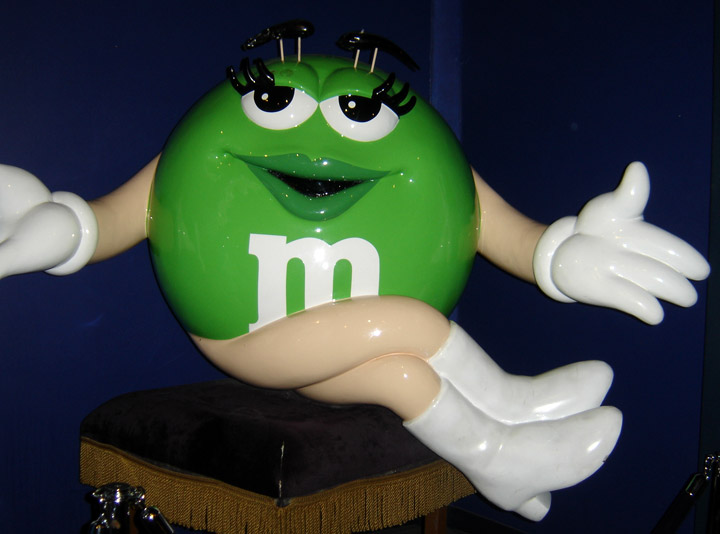 In 2008, two new varieties of the candy were introduced — "Wildly Cherry" M&M's, and as a marketing tie-in with the film Indiana Jones and the Kingdom of the Crystal Skull, "Mint Crisp" M&M's.

M&M's also introduced another new product called "M&M's Premiums" in 2008. They come in five flavors — chocolate almond, mint chocolate, mocha, raspberry almond and triple chocolate (milk, dark, and white chocolate), which are sold in small upright cartons with a plastic bag inside. M&M's Premiums do not have a candy shell, but are coated with carnauba wax and color.

During summer of 2008, My M&M's launched 'Faces,' which allows consumers to print the faces of loved ones on M&M's chocolate candies. 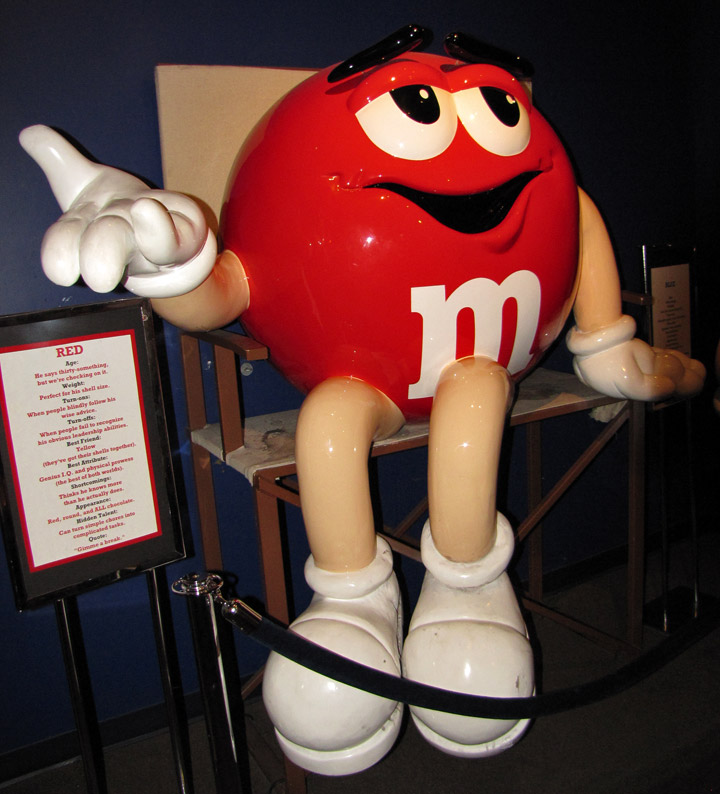 In February 2009, M&M's launched "M&M’S® Color Break-Up" Promotion where colors were sold in separate packs (one for each color): the packs included a code to win prizes.

In Summer 2009 M&M's Launched "Strawberried Peanut Butter" to tie in with the release of Transformers: Revenge of the Fallen 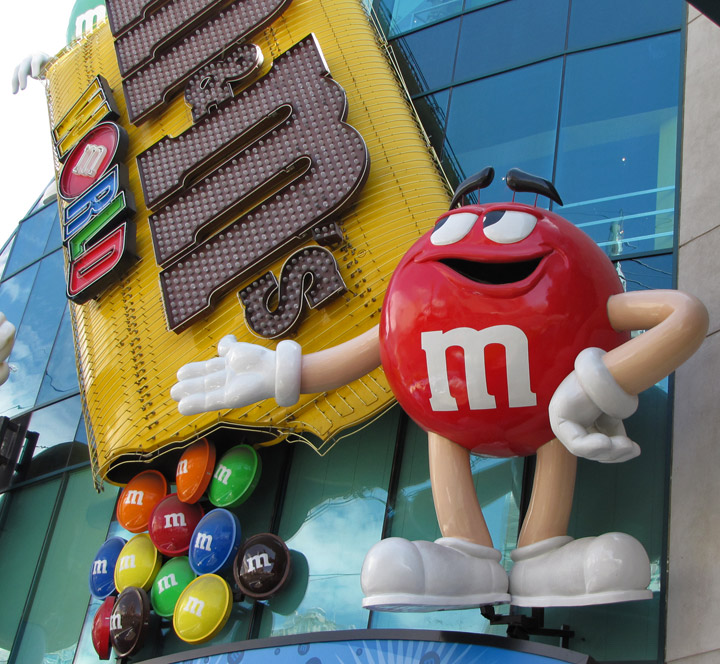 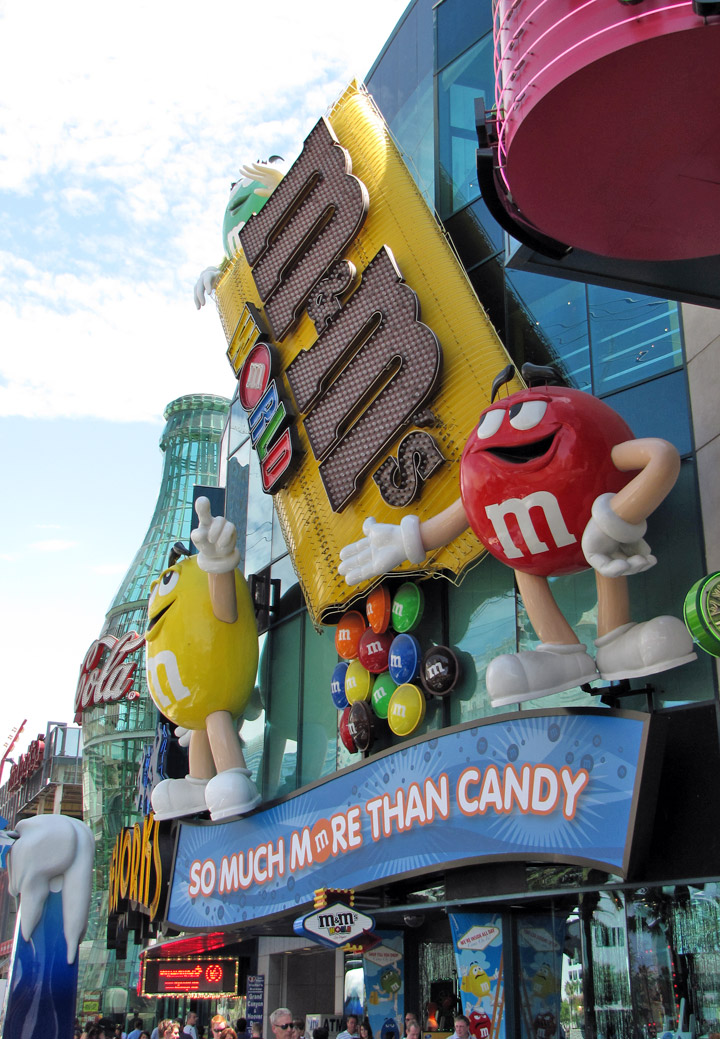 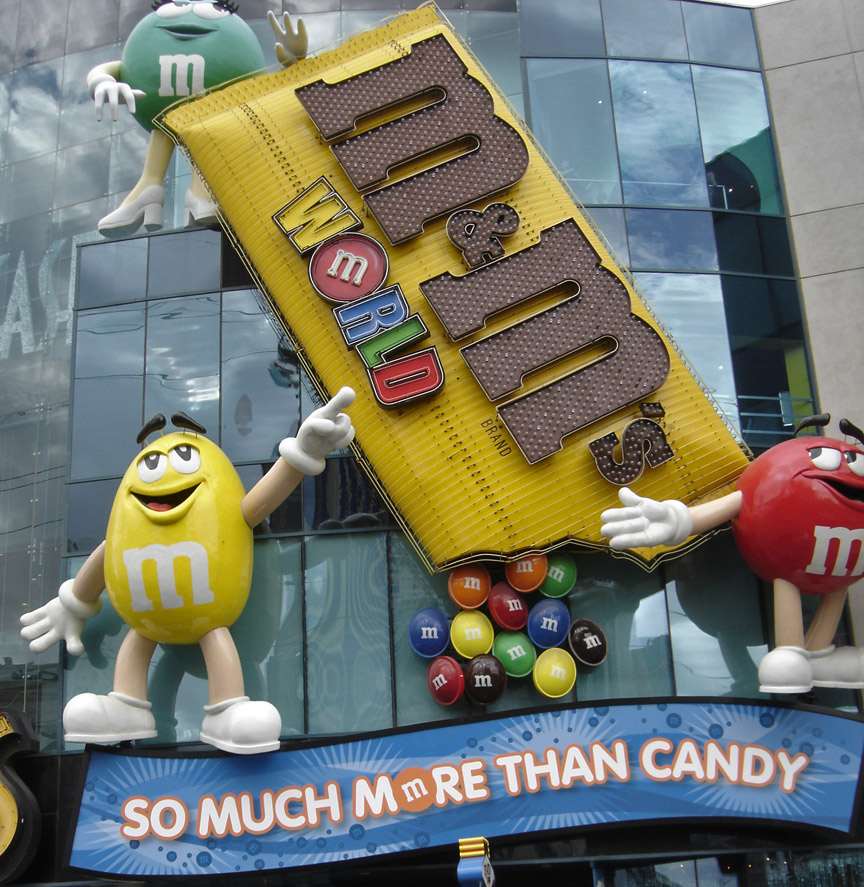 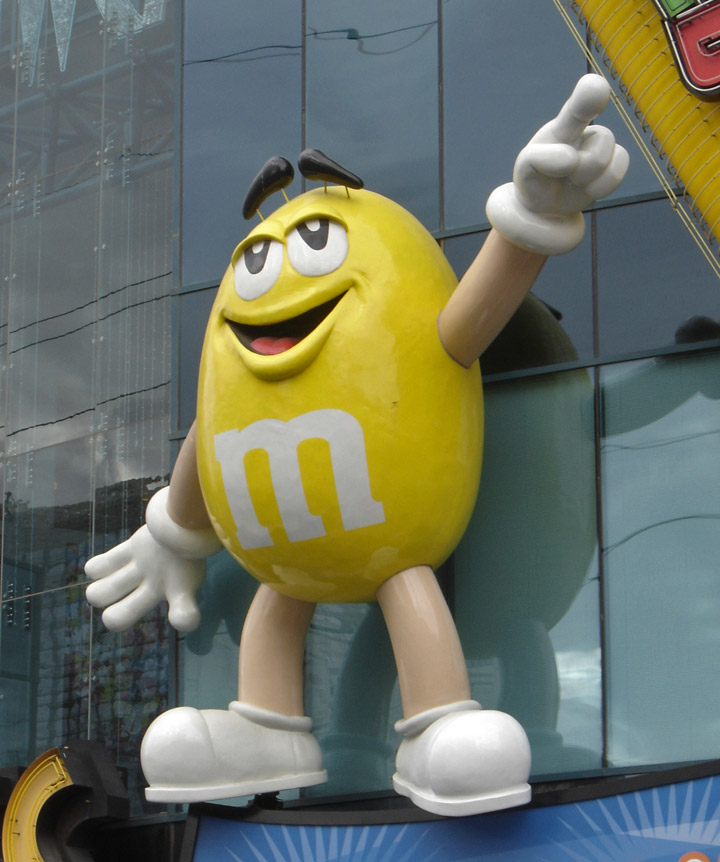 see how he lost his M 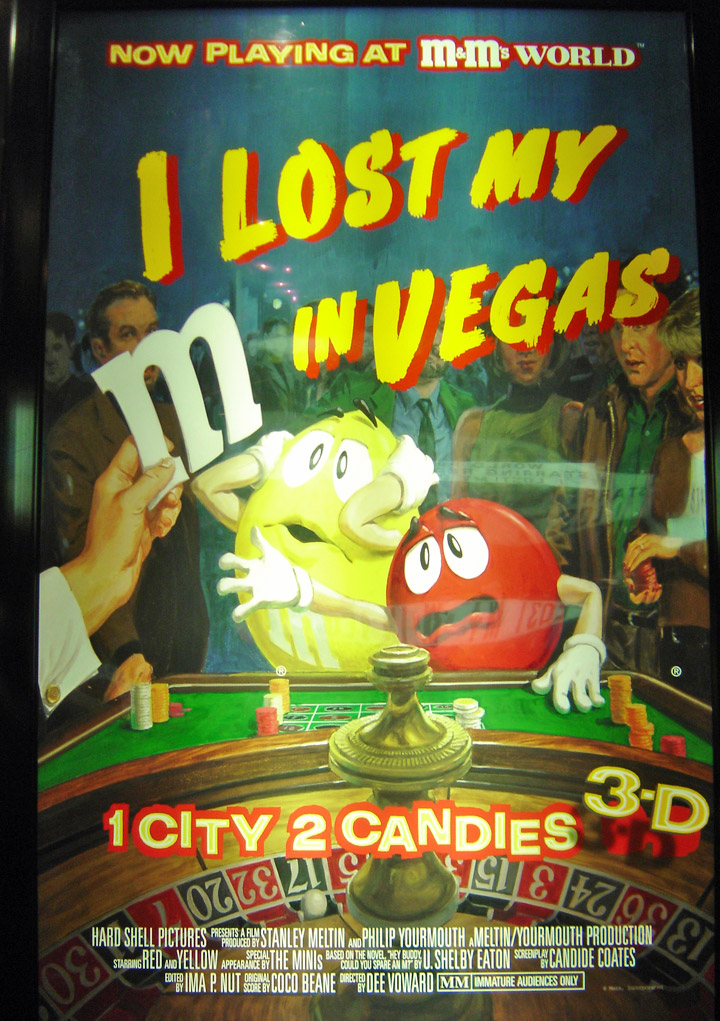 after seeing the movie 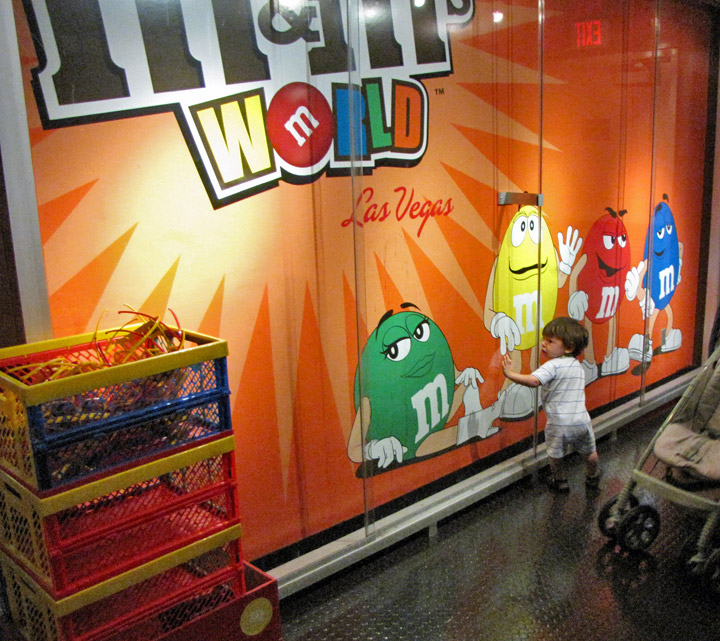