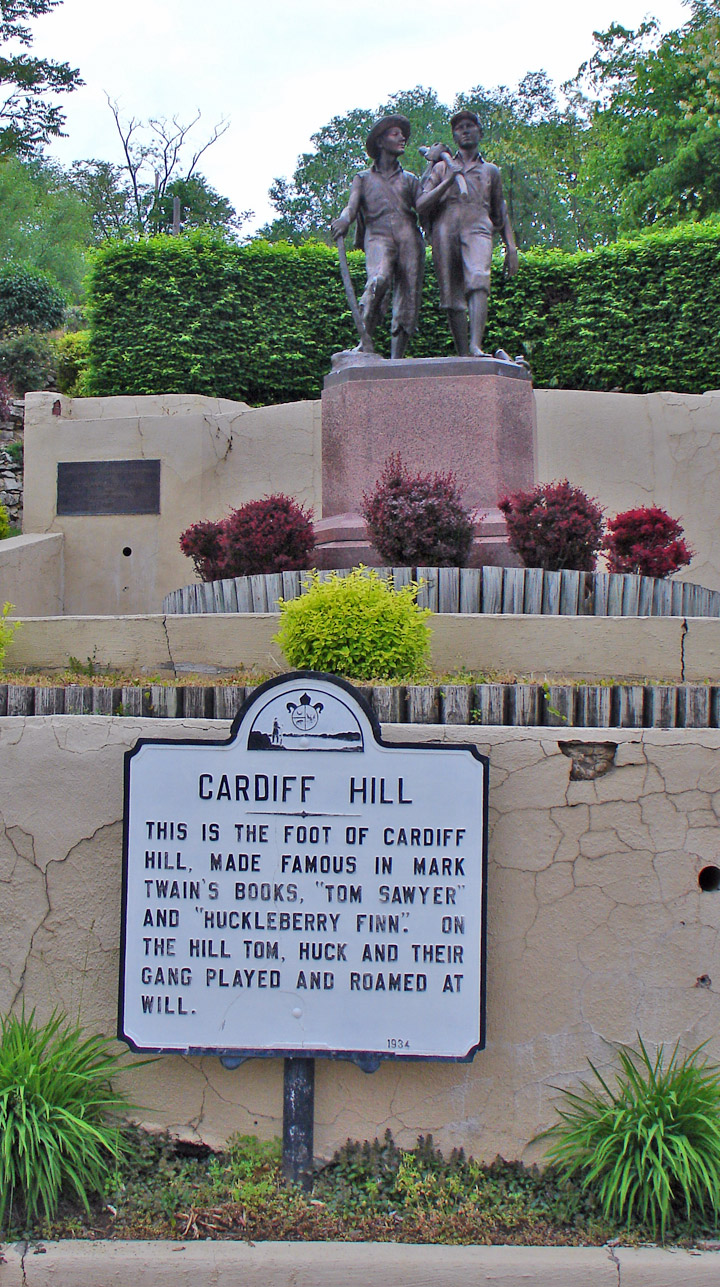 Hannibal's first inhabitants, as far as we know, were the Mound Builders whose mounds can still be seen in and near the city. Centuries later the Missouri Indians lived here: the Sac and Fox Indians being the last to inhabit the area.

The first explorers on record, who saw the river shore at the future site of Hannibal, were Father Marquette and Louis Joliet in 1673. The first explorer who landed at the site was the French monk, Louis Hennepin, in 1680. He named the body of water north of Hannibal the Bay de Charles. 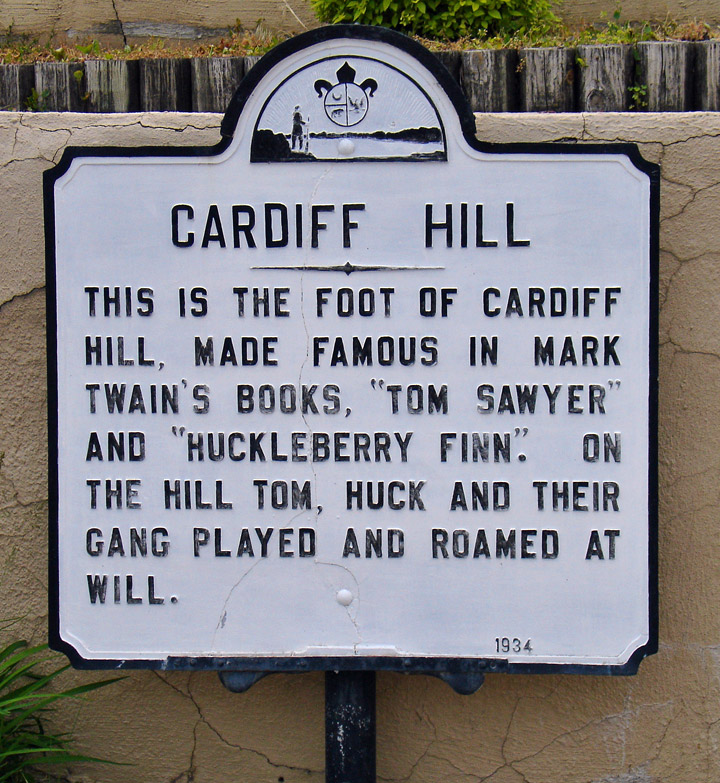 In the 1790's, salt was discovered in the vicinity. It was of great value to St. Louis and other large settlements. Mathurin Bouvet was able to secure Spanish land grants which allowed him to take title of two parcels here in 1795. One, located in Ralls county, at what came to be known as Spalding, contained a salt lick. The salt was extracted from the land and transported to the warehouse at Bay de Charles where his workers and their families had formed the first white settlement in Marion county.

As salt became available elsewhere and Indian uprisings increased, the number of settlers dwindled. In 1800, Bouvet and his two assistants were killed by Indians and the warehouse was destroyed. Remains of the furnaces and kettles near Spalding are still visible on a private farm. 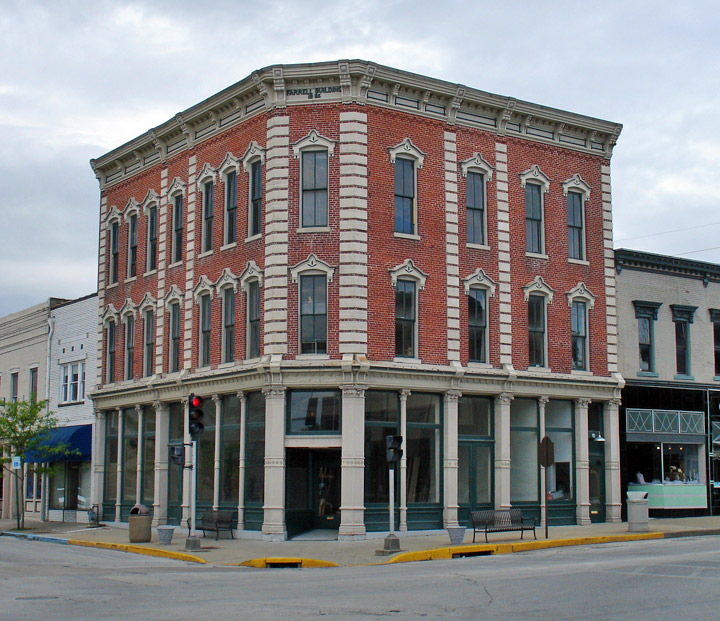 Hannibal got its name from Hannibal Creek, a name given to the present Bear Creek by Don Antonio Soulard, Spanish surveyor-general who mapped the area in 1800 for the Spanish government. Hannibal, of course, was the name of a historic Carthagenian general. 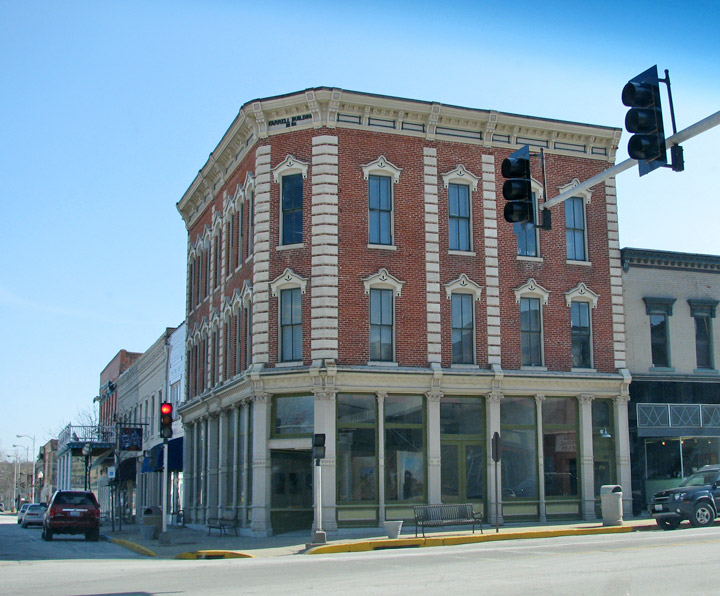 The site of Hannibal was first owned by Abraham Bird who received 640 acres of land from the US government through an earthquake certificate. He lost his land in the New Madrid earthquake of 1811 and 1812. The huge quake had been felt as far away as the Carolinas. Earth was swallowed up, the Mississippi changed course to the extent of flowing BACKWARDS, and many farmers like Bird lost their land. The certificates issued by the Federal government allowed those who lost their land to have other properties in Missouri. 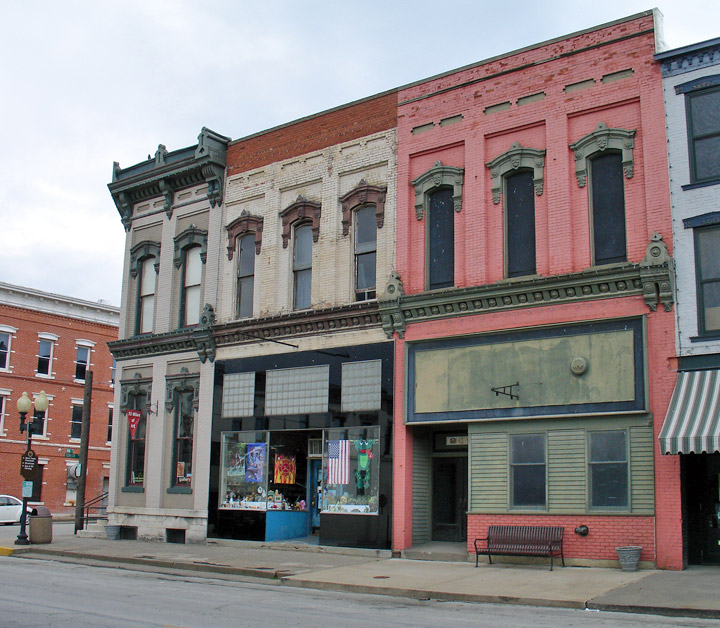 Hannibal was finally founded in 1819 by Moses Bates who platted the town for the Hannibal Company that sold the lots at low prices. He and Jonathan Fleming built the first building in town, a log cabin, near the corner of North Main and Bird Streets. Bates also owned the first steamboat in town, the General Putnam. In 1830, the population was only 30. However, when Hannibal became chartered as a city in 1845, James Brady became the town's first mayor, and the city soon grew to 2020 by 1850. 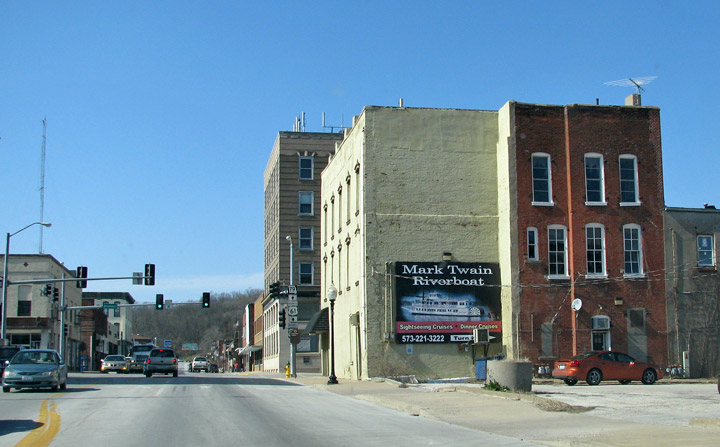 The early industries in Hannibal were pork packing, soap and candle making, coopering, milling of lumber, milling of grain, rope making, and tanning (and NOT the kind we do at the beaches today!). Flat boats laden with grain and hemp tied up at the waterfront, livestock fattened in the back country were driven to Hannibal to market, logs were floated down from Wisconsin and Minnesota and converted into boards as sawmills flourished. Packet steamers arrived daily from St. Louis and Keokuk, Iowa. 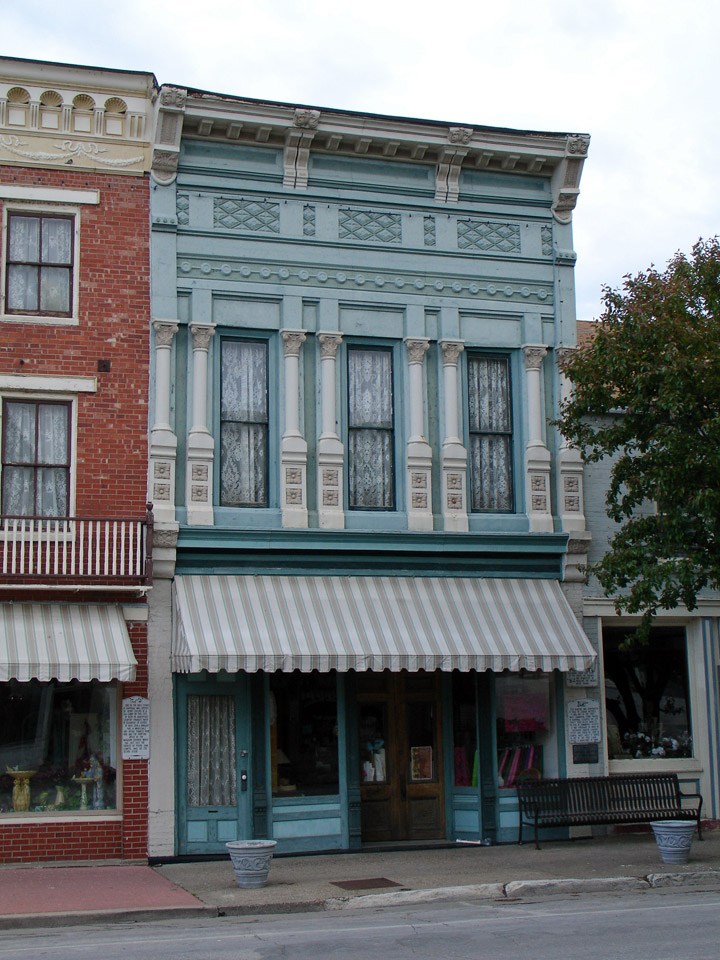 In 1830, the first school was built on the city square. A year later in 1831, the first river ferry boat to the Illinois side, owned by Samuel Stone, was operating. Six years later in 1837, the first newspaper, the Commercial Advertiser, opened for business. 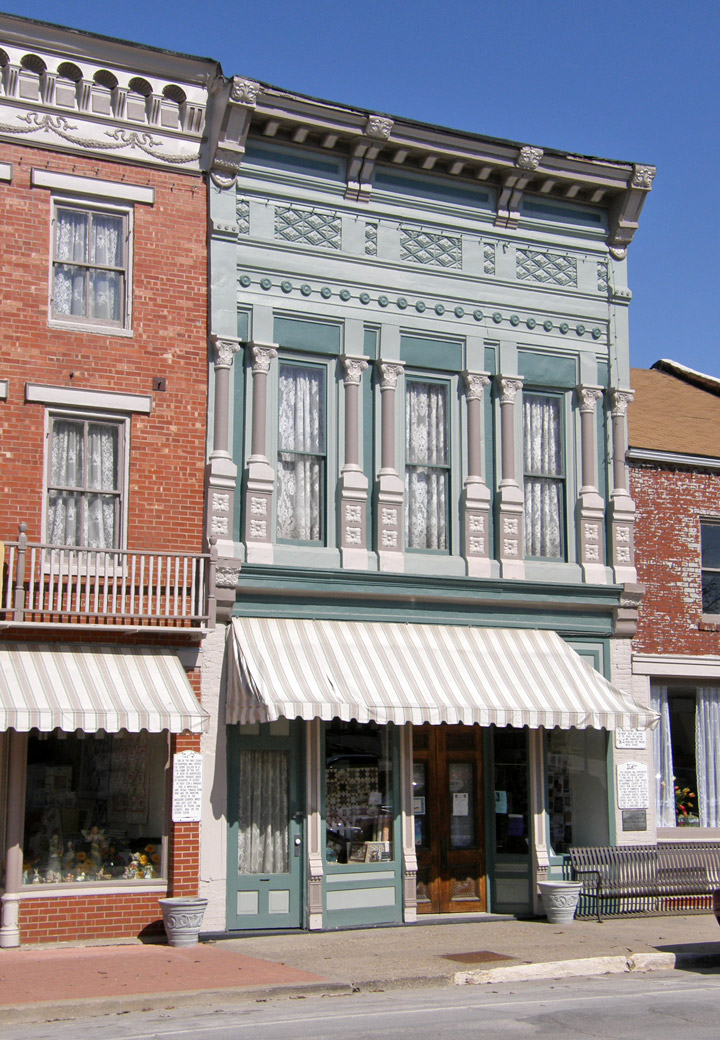 The California Gold Rush in 1849 had a great effect in Hannibal. Over 200 men from the general area went to California, most returning with some measure of financial success. Travelers from the east were outfitted for the overland trip at the local store operated by Tilden Selmes. 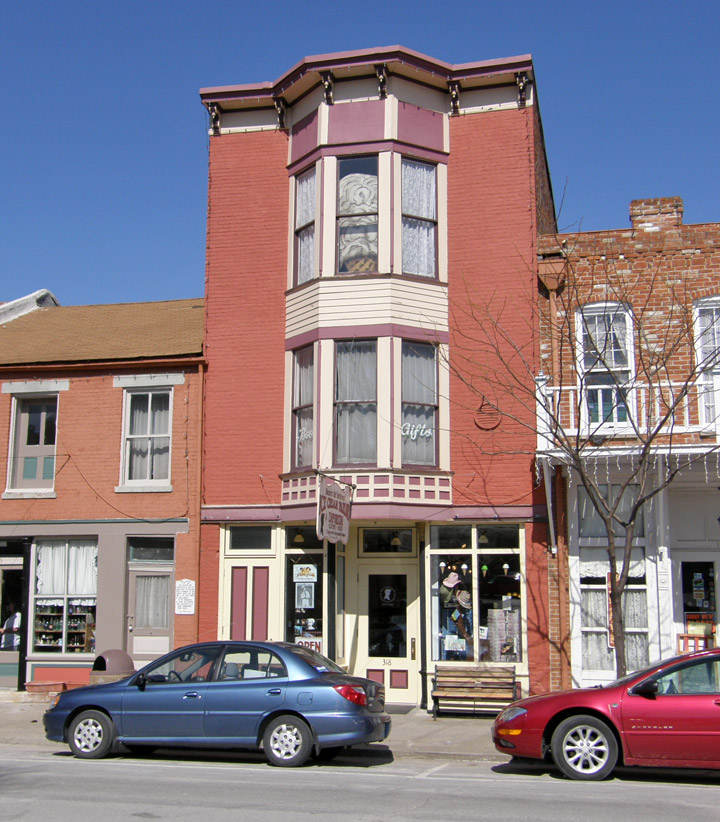 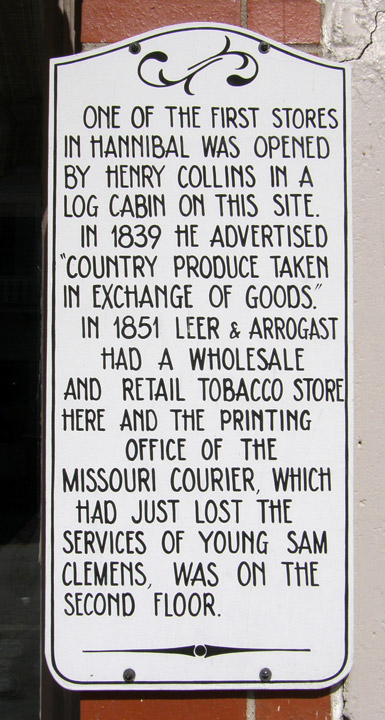 Hannibal has always been known for its rich railroad history. The first railroad to cross the state of Missouri, the Hannibal & St. Joseph Railroad, was completed in 1859. The first run in 1860 to carry the Pony Express mail across the state to St. Joseph, was made by a skillful engineer, Addison Clark, who made the 206 mile run from Palmyra to St. Joseph in 4 hours and 20 minutes--a record not broken for years. The first railway mail car for sorting mail en route was made in the railroad shops at Hannibal in 1862. A model of this car is on display a St. Joseph. At an earlier date, the first locomotive manufactured west of the Mississippi was made at the Hannibal-St. Joseph Shops in Hannibal. It was a 34 ton engine called the General Grant.

Twain's name used all around the town

In Civil War years, the majority of Hannibal citizens favored the Confederate cause, but the city was occupied by Union soldiers throughout the war. 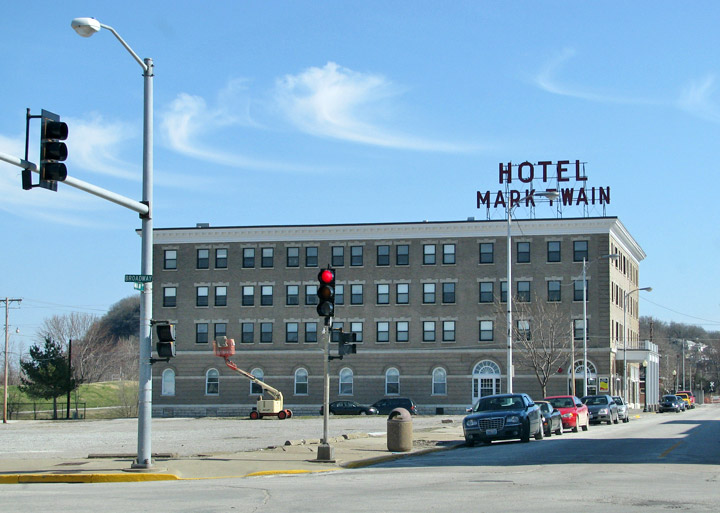 In 1866, the first high school was housed at the corner of Sixth and North Streets and the house is still standing today. That same year the town built the state's first city-owned light and power plant. 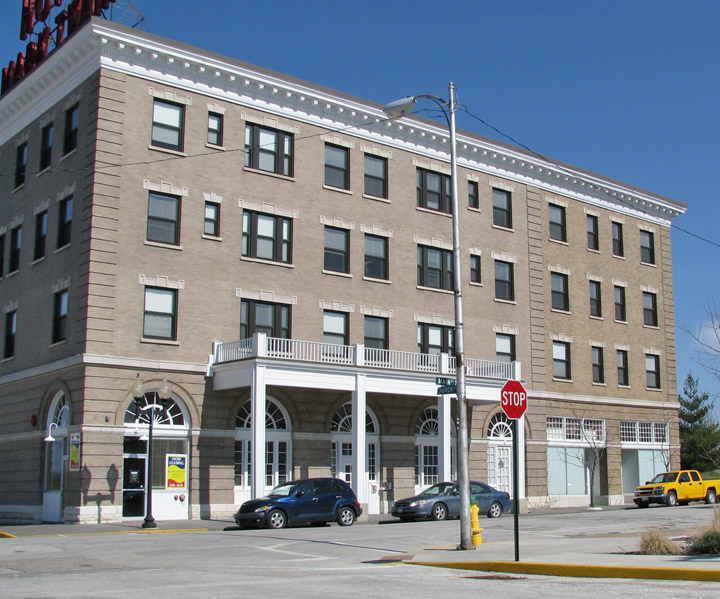 The railway bridge was built in 1871 for the Wabash Railroad and was used for rail, pedestrian, wagon and automobile traffic. Wabash Railroad was absorbed by Norfolk & Western in 1964. N&W later merged with Southern Railway in the 1980's and is now known as Norfolk Southern. The railway bridge was, until a few years ago, a turn style bridge which would revolve on a center pivot to allow barge traffic to pass. A new lift span was recently installed which doubled the width of the barge channel and added greatly to the safety of the bridge and to barges. Today, the bridge is used strictly for freight train traffic. It was the second bridge to cross the Mississippi River touching Missouri & Illinois shores. It also was the only bridge at Hannibal until 1936 when President Roosevelt came to Hannibal to dedicate the new Mark Twain Memorial Bridge for automobiles. This Mark Twain Memorial Bridge is currently being replaced with plans for a new bridge by the late 1990's. 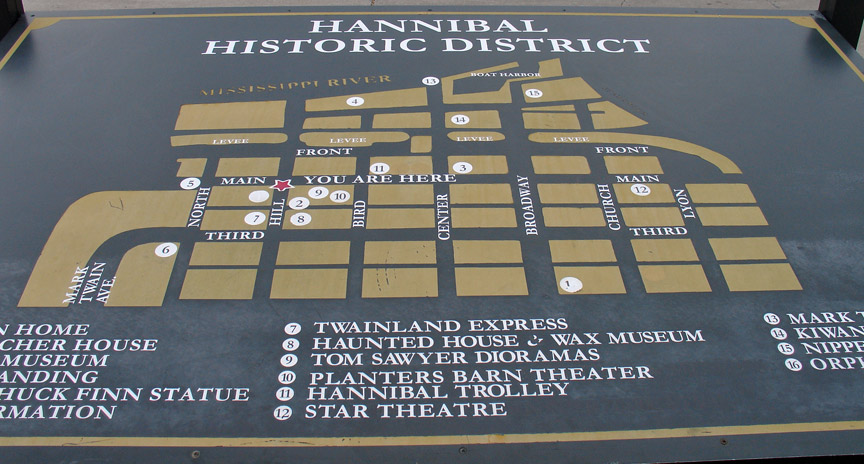 Hannibal's first telephone service began in 1879, the equipment being installed by Charles McDaniel, a pioneer in the field.

Lumbering was also an important industry in the 1870's and 1880's in Hannibal. Logs were floated down river from Wisconsin and Minnesota, processed, and then shipped from the town to points west for building in the pioneer areas. 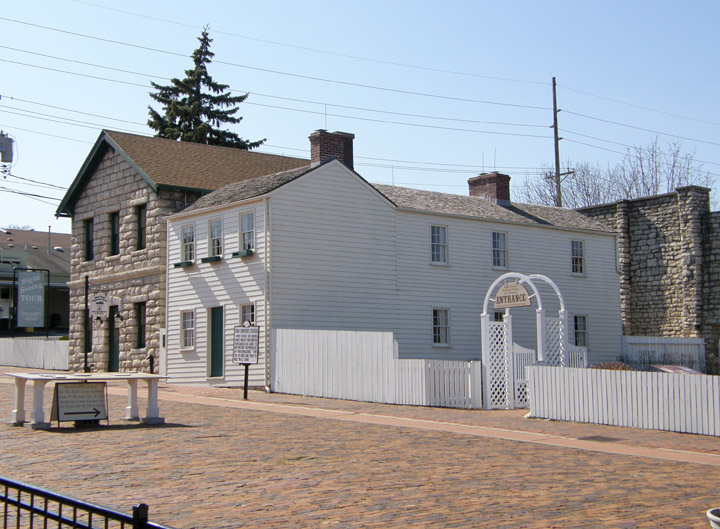 The city's first official water system, at first privately owned, began in 1879. In 1889, the first tax-supported library in Missouri was established. Later in 1902 on February 15, the first Free Public Library west of the Mississippi River was dedicated in Hannibal. A few years later, in 1909 local philanthropist, W.B. Pettibone, gave the city approximately 400 acres for Riverview Park. 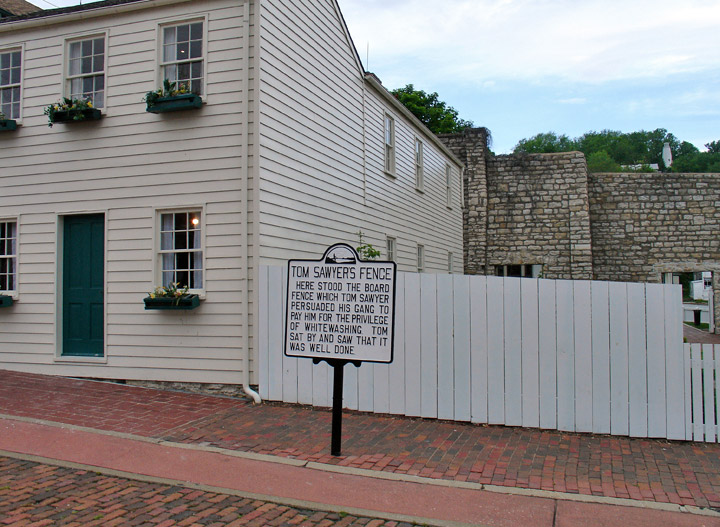 After the turn of the century, industries began to change in the town. Three miles south of town the shale and limestone bluffs attracted one of the largest cement manufacturing plants in the nation. Atlas Portland Cement Company opened in 1903 and is still producing under other ownership. In its early days, it furnished cement for the Panama Canal and the Empire State Building. The largest shoe factory in the United States in the 1920's was the International Shoe Company located here in Hannibal.

Four postal issues commemorating Mark Twain have been released with first-day issues in Hannibal: the ten cent Mark Twain Stamp of 1940, the eight cent Tom Sawyer Stamp of 1972, and the thirty-six cent Mark Twain/Halley's Comet aerogramme of 1985. On August 5, 1990, the Steamboatin' Centennial cancelation was handled on the Delta Queen docked in Hannibal.

Hannibal-LaGrange College and Hannibal College. LaGrange College had formerly been located in LaGrange, Missouri. From 1929 to 1981 the college offered a two-year course. Now the four-year Baptist college offers bachelor's degrees in several disciplines as well as a master's in education. 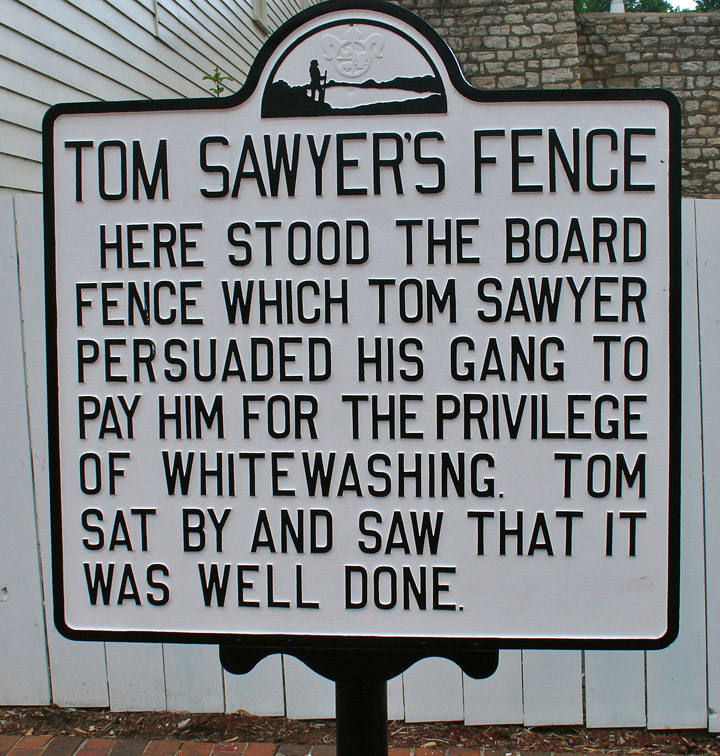 the story of the fence

Several old church buildings in Hannibal are still in use. Three date back to the 1850's: Trinity Episcopal Church, the Eighth and Center Streets Baptist, and the first Catholic Church. Currently, fifty-three churches, representing various denominations, serve the city.

Statues of important people, real and fictional, are scattered about the town. The statue of Congressman William Henry Hatch in Central Park was sculptured by Frederick Hibbard and dedicated in 1914. Hatch (1833-1896) was a Hannibal attorney who was instrumental in securing the passage of agricultural legislation that established the position of Secretary of Agriculture in the Cabinet of the President of the United States. Hibbard also sculpt the Tom and Huck Statue placed at the foot of Cardiff Hill and the Mark Twain Statue located in Riverview Park overlooking the Mississippi River. Hibbard was from the city of Canton, Missouri, 35 miles north of Hannibal.

Three hospitals have served the community over the years: Levering, St. Elizabeth, and the new Hannibal Regional Hospital that recently began operation on the west edge of town(1993).

The Hannibal of Mark Twain 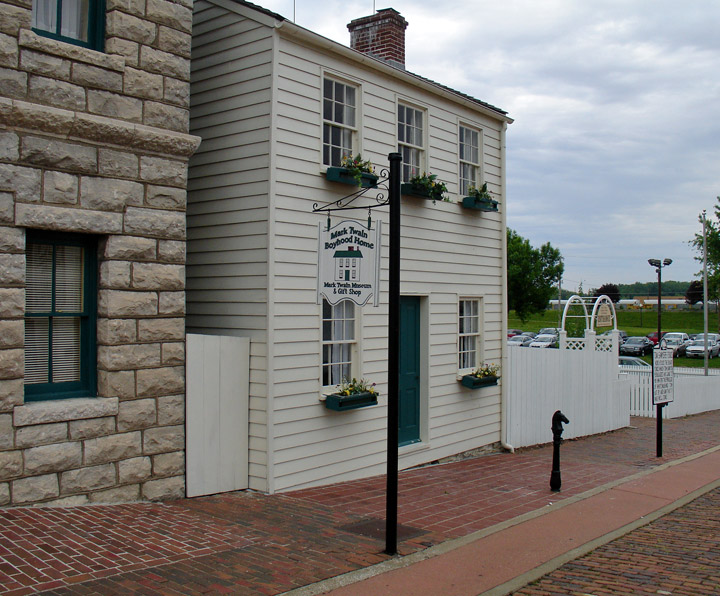 THE MARK TWAIN BOYHOOD HOME - This is the house the Clemens family lived in from 1844 to 1853. Sam Clemens’ adventures were retold later as those of Tom Sawyer.

MARK TWAIN MUSEUM - Located adjacent to the Boyhood Home. This building was built as a WPA project in 1937. Visit Mark Twain displays and our gift shop. 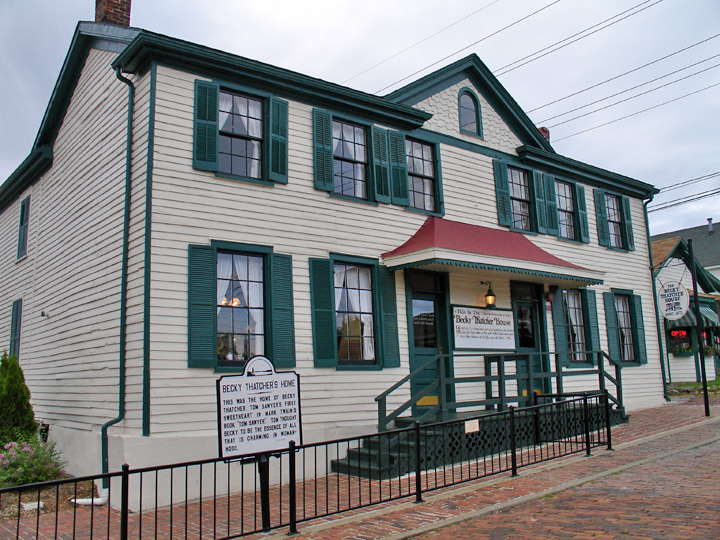 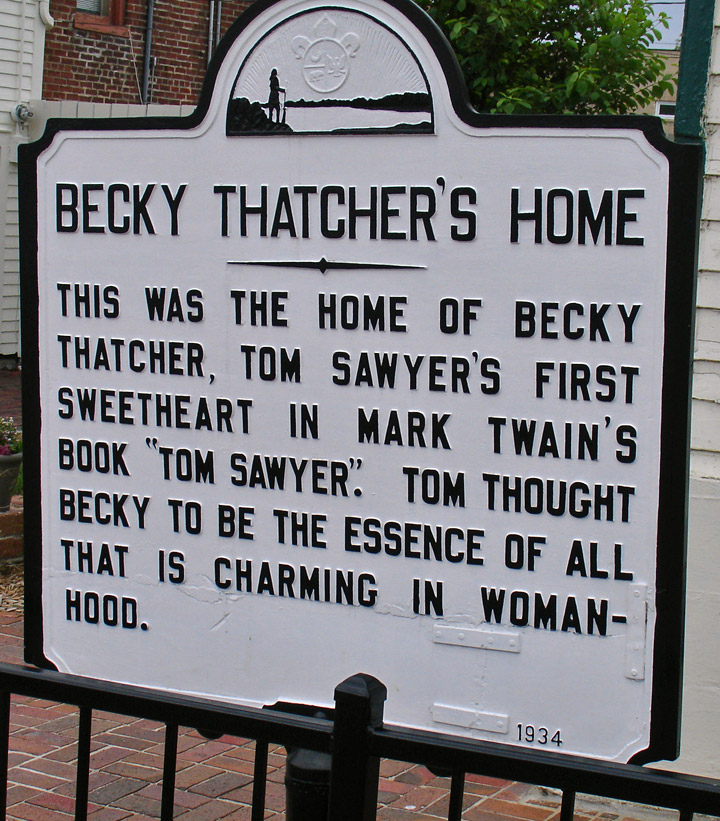 BECKY THATCHER HOUSE - The Hawkins family lived across the street from the Clemens family. Laura Hawkins was the model for Becky Thatcher in The Adventures of Tom Sawyer. Two upstairs rooms are furnished and are on display. The first floor is a book and gift shop. 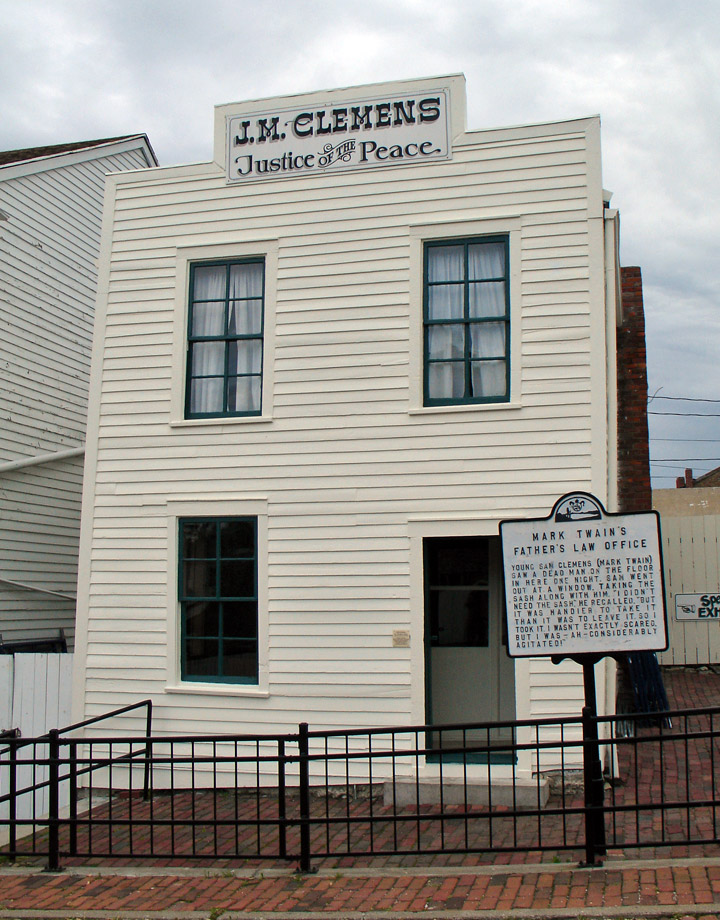 JOHN M. CLEMENS JUSTICE OF THE PEACE OFFICE - Used by Mark Twain’s father, John Clemens, as office and courtroom. It is the model for the courtroom in Tom Sawyer. 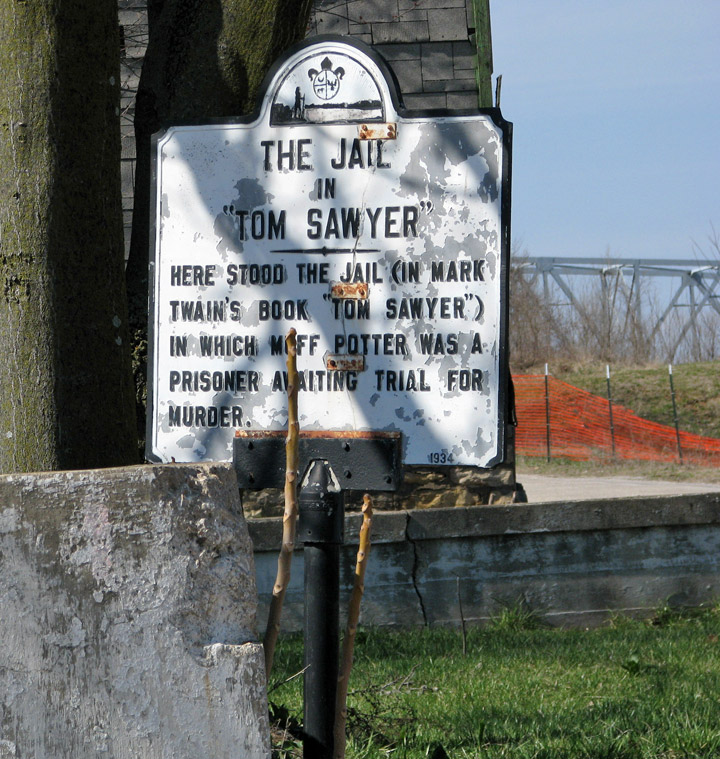 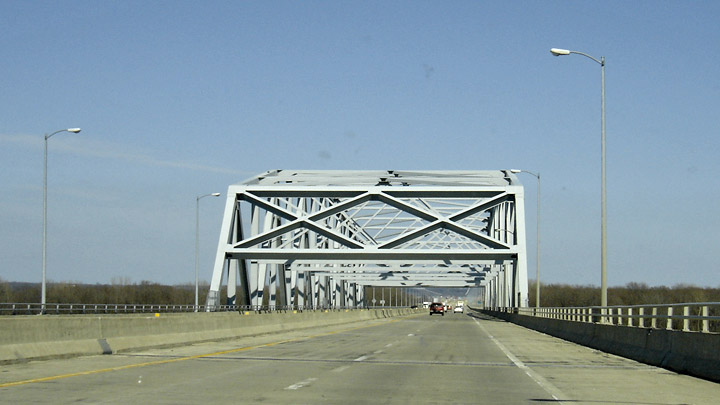