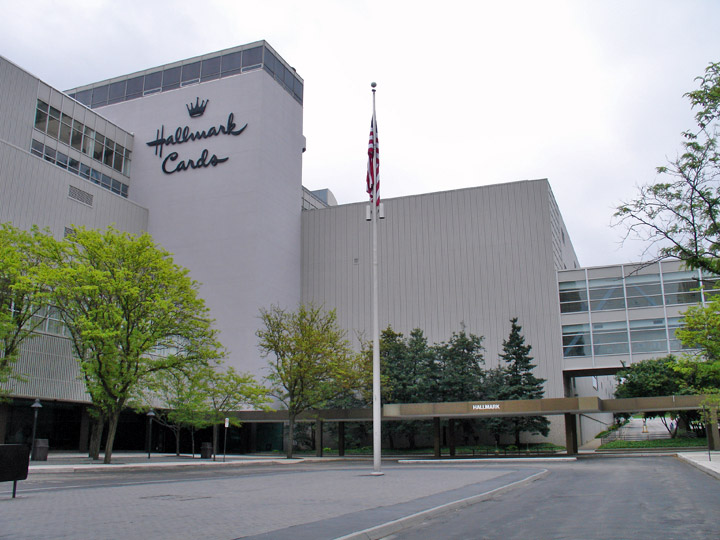 the corporate home of Hallmark Cards

There is no place in Kansas City – or any city – quite like Union Station. This fully restored landmark is Kansas City's most prominent destination for cultural and entertainment activities. 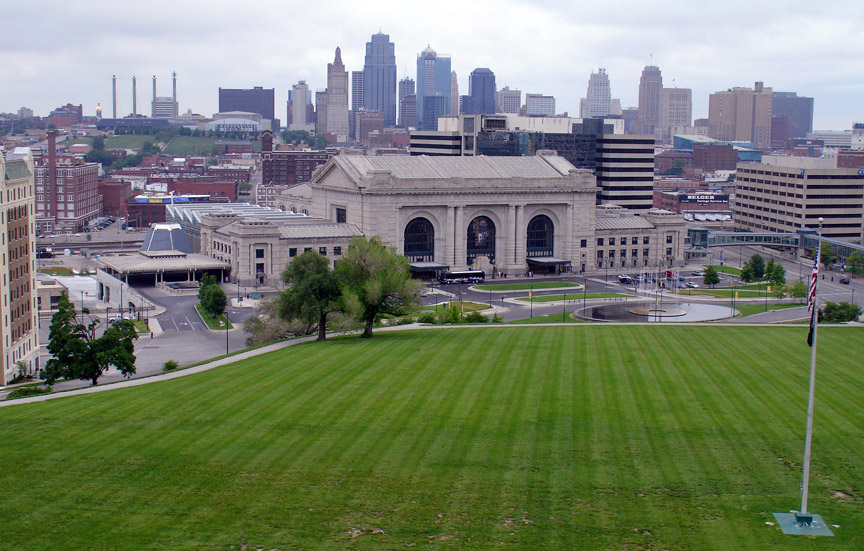 Built in 1914, Union Station encompasses 850,000 square feet and originally featured 900 rooms. In its prime as a working train station, accommodated tens of thousands of passengers every year. At its peak during WWII, an estimated one million travelers passed through the Station. The North Waiting Room (now the Sprint Festival Plaza) could hold 10,000 people and the complex included restaurants, a cigar store, barber shop, railroad offices, the nation's largest Railway Express Building (used for shipping freight and mail) as well as a powerhouse providing steam and power. 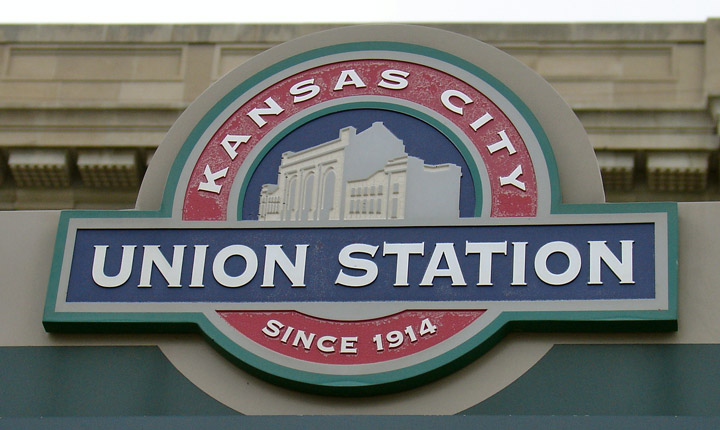 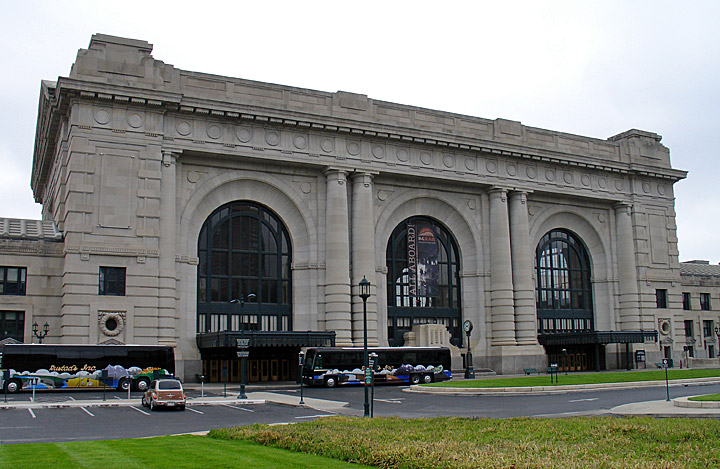 Closed in the 1980s, the Station sat empty and neglected, escaping demolition on several occasions. In 1996, a historic bi-state initiative was passed to fund the Station's renovation, which was completed in 1999. 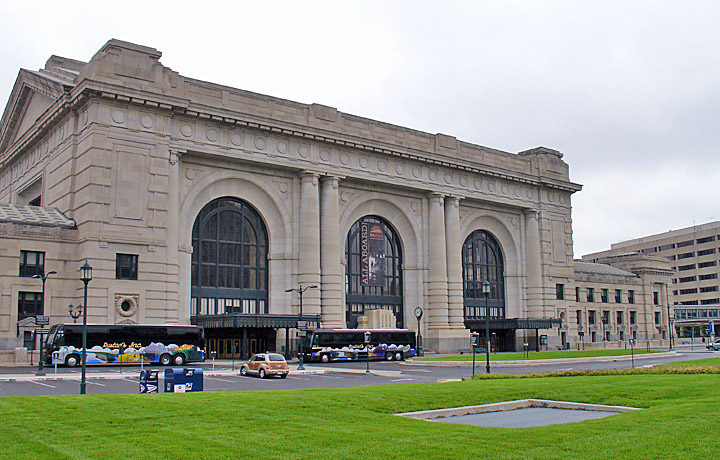 The Station is once again a popular destination for the surrounding community just stopping by for lunch or to mail a letter from the post office in the west end of the Grand Hall. The station also draws tourists from all over the world who marvel at the Grand Hall's 95-foot ceiling, three 3,500-pound chandeliers and the six-foot wide clock hanging in the Station's central arch. 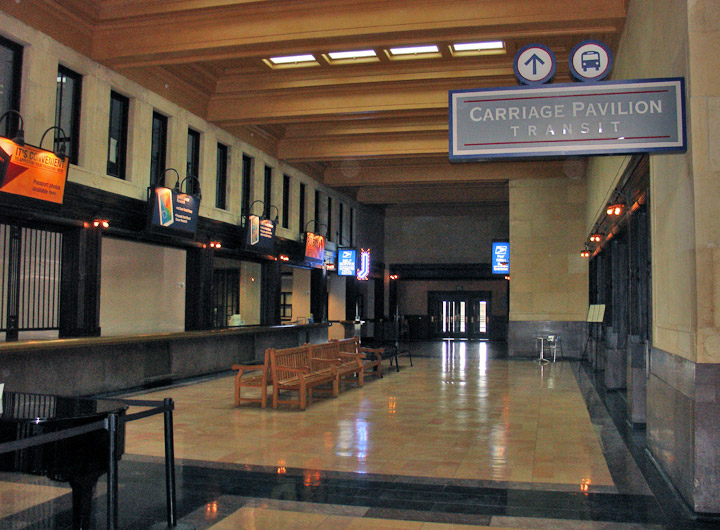 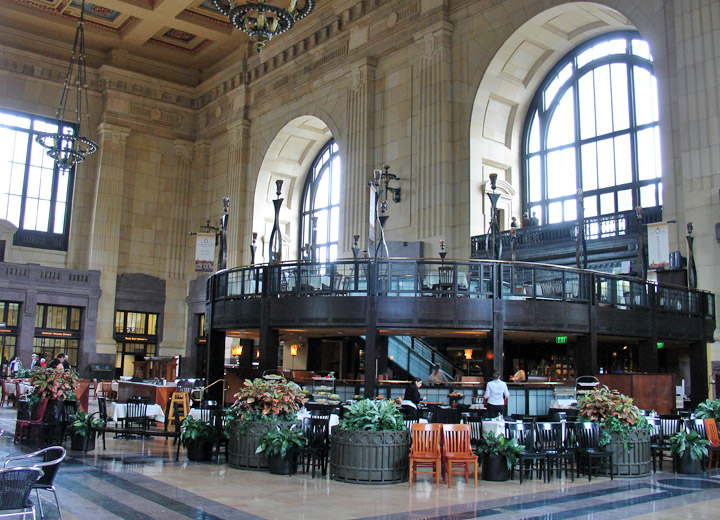 To this we've added a permanent rail exhibit called the KC Rail Experience, exhibit spaces for traveling exhibits produced by the Smithsonian and other national organizations, a planetarium, an interactive science center called Science City and a vibrant Theater District featuring giant-screen movies and live theater, and much more.ore. 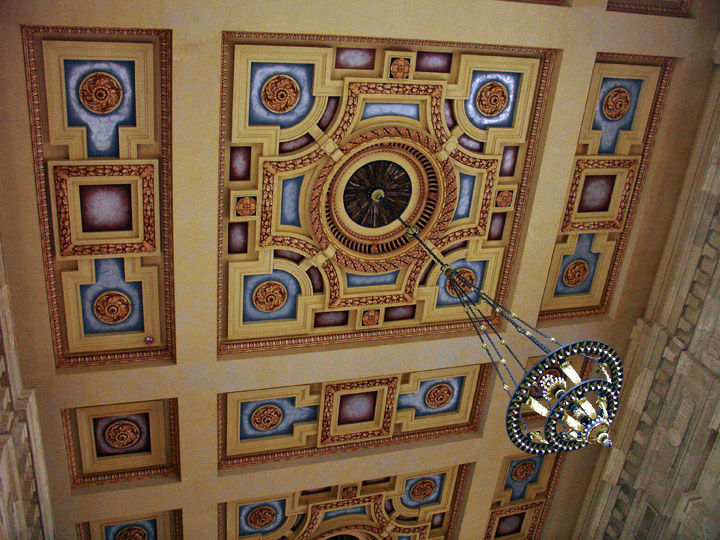 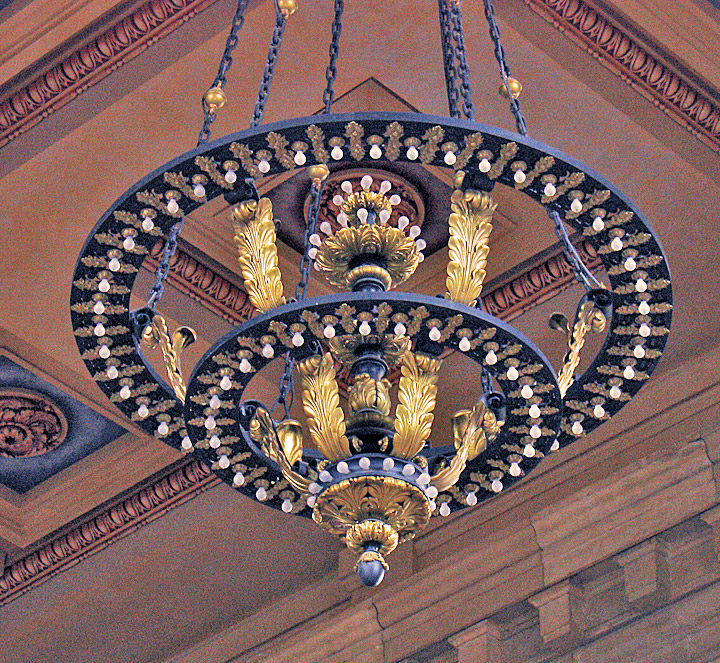 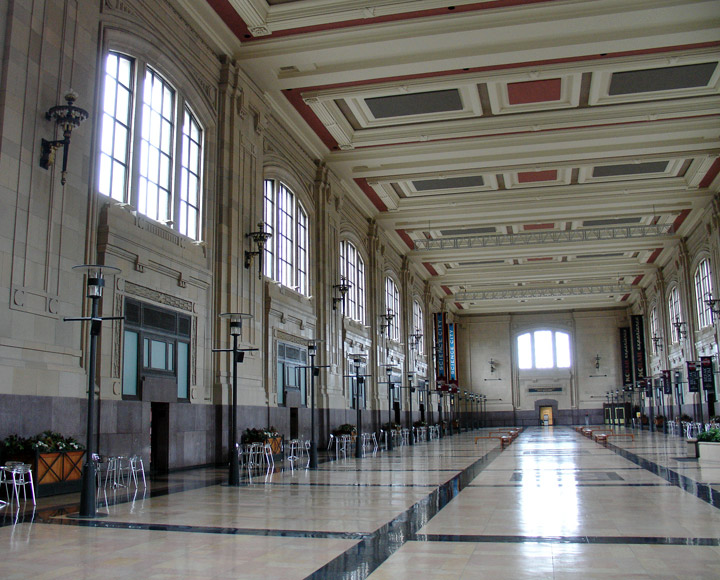 the hallway to the train platforms 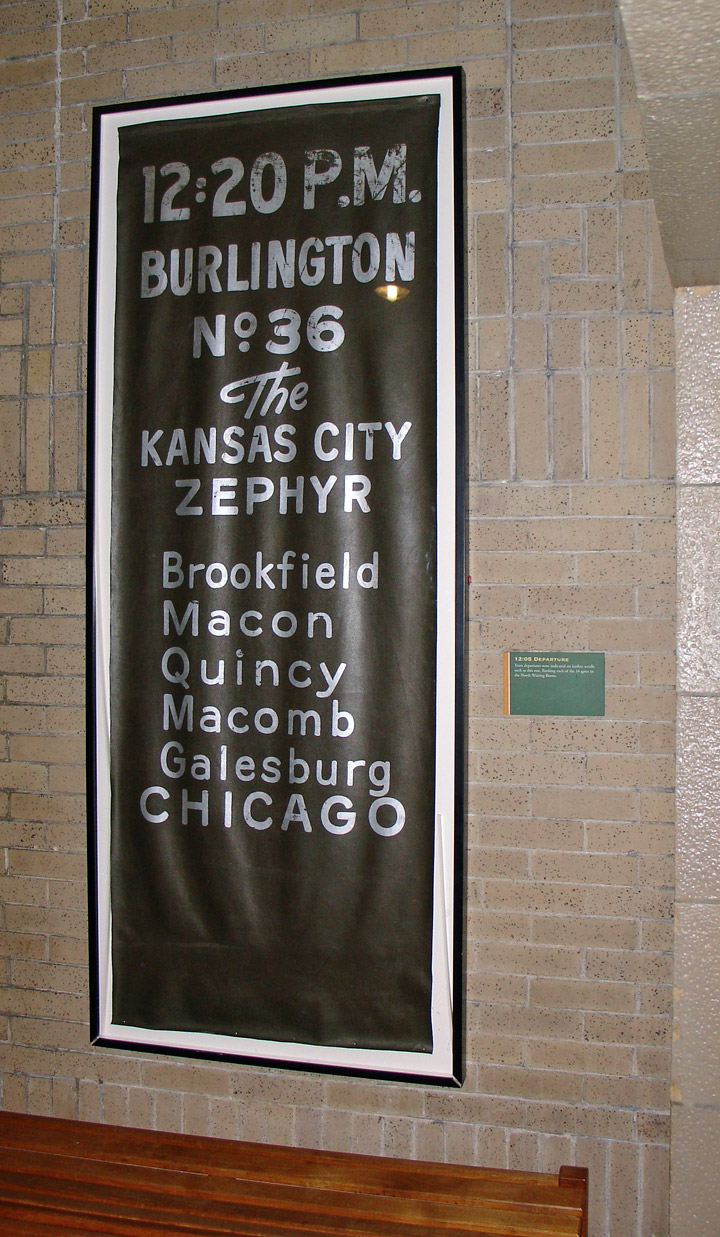 the train to Chicago 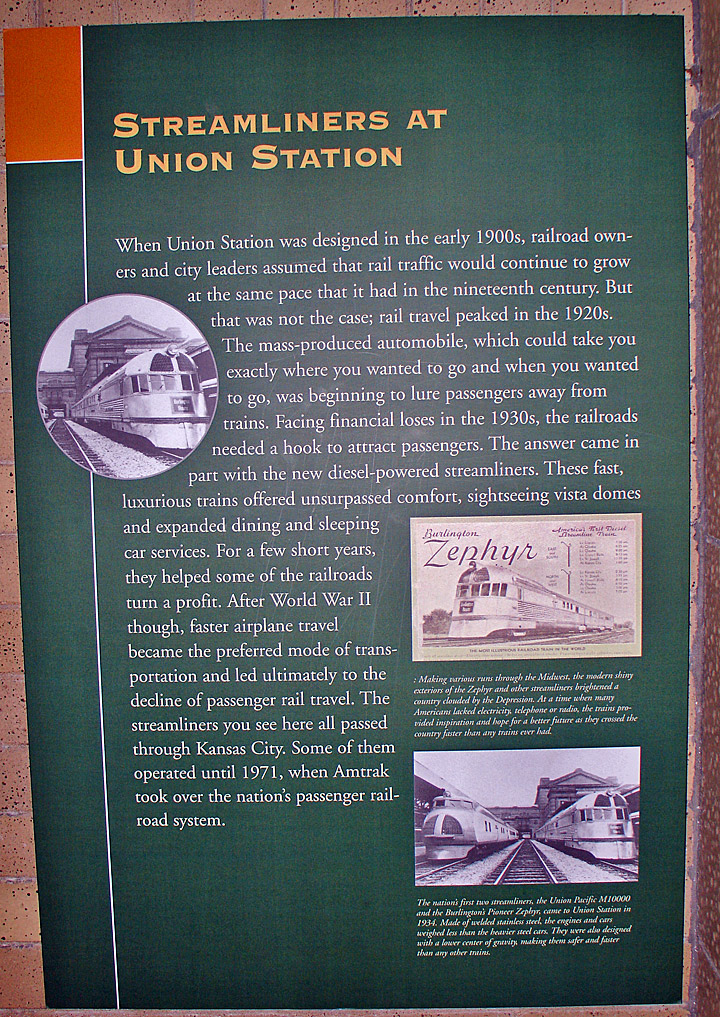 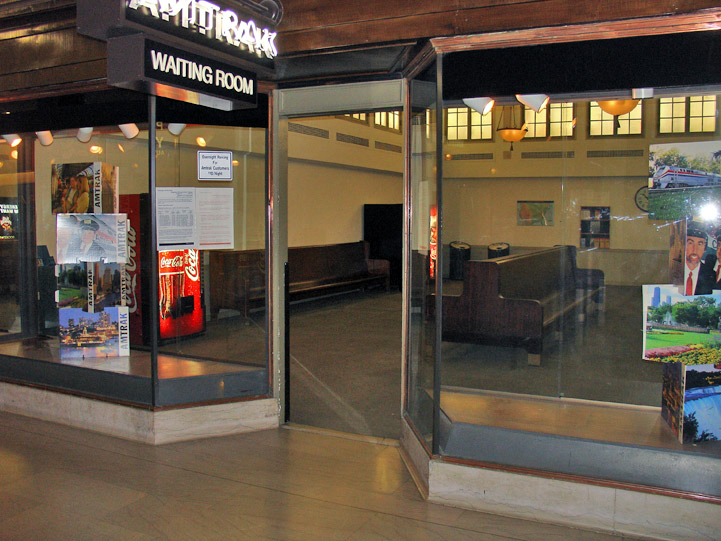 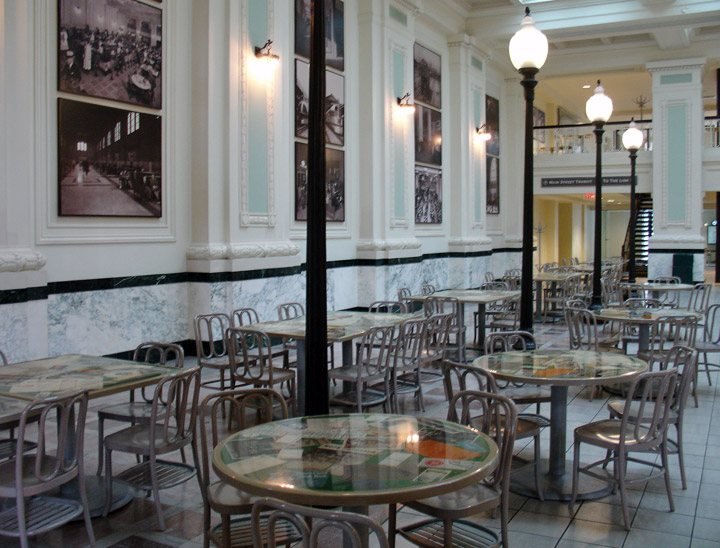 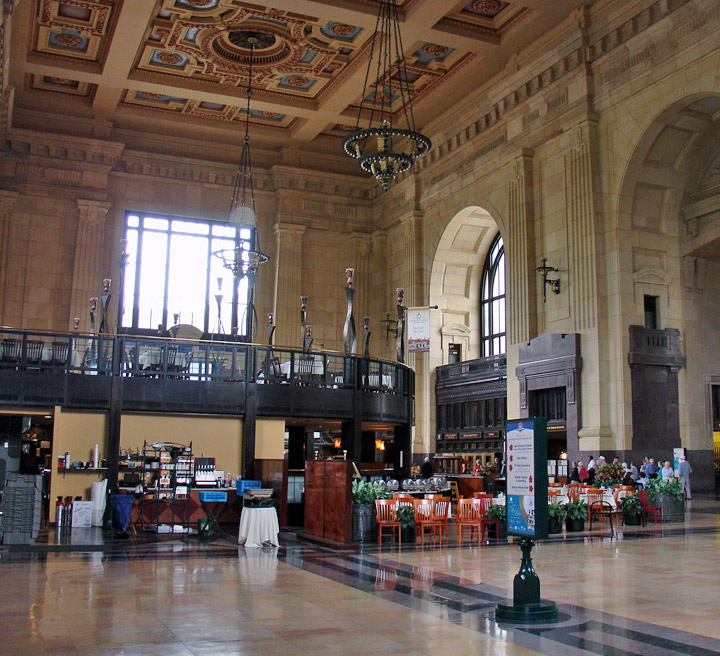 the lobby as it is used today 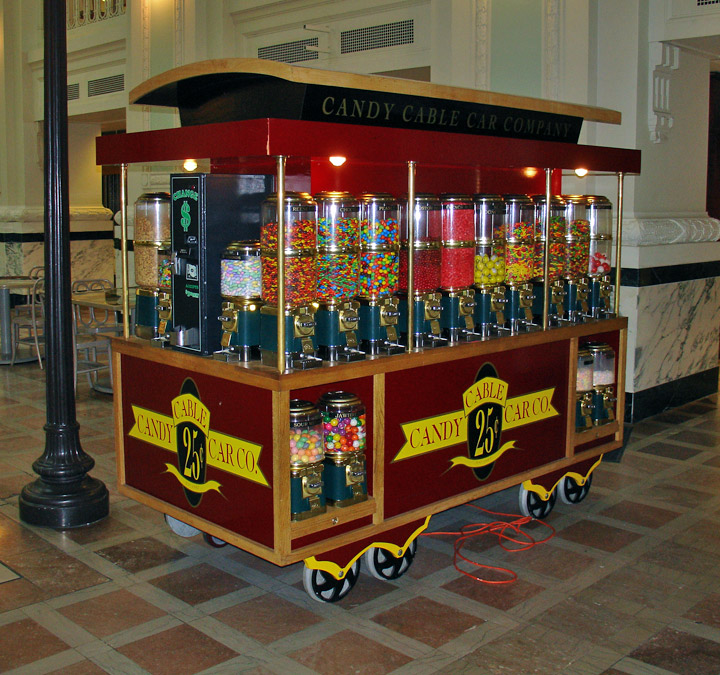 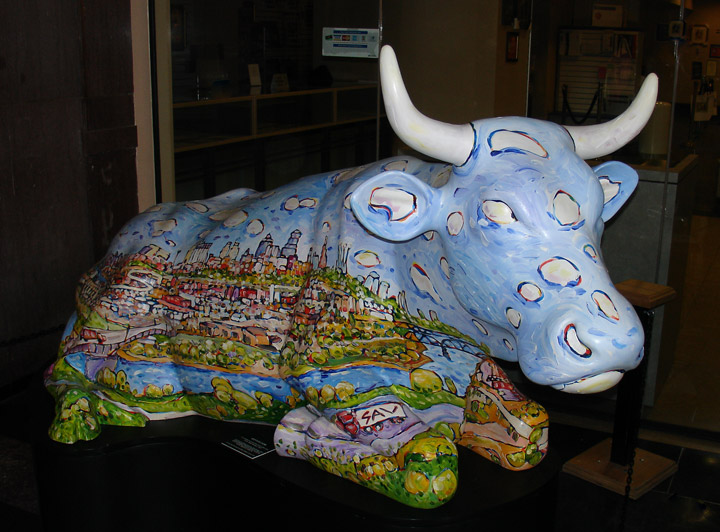 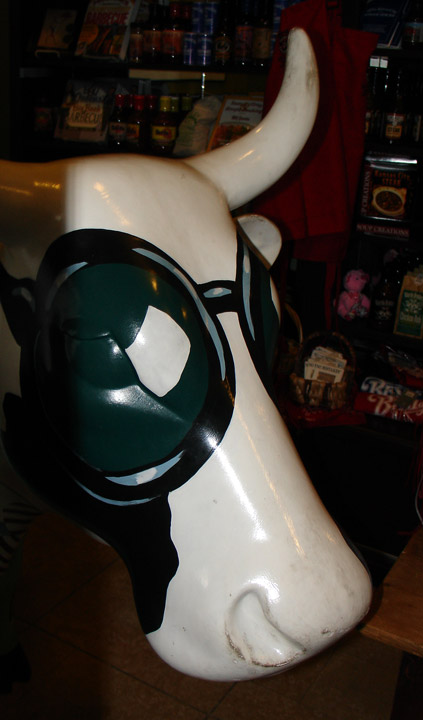 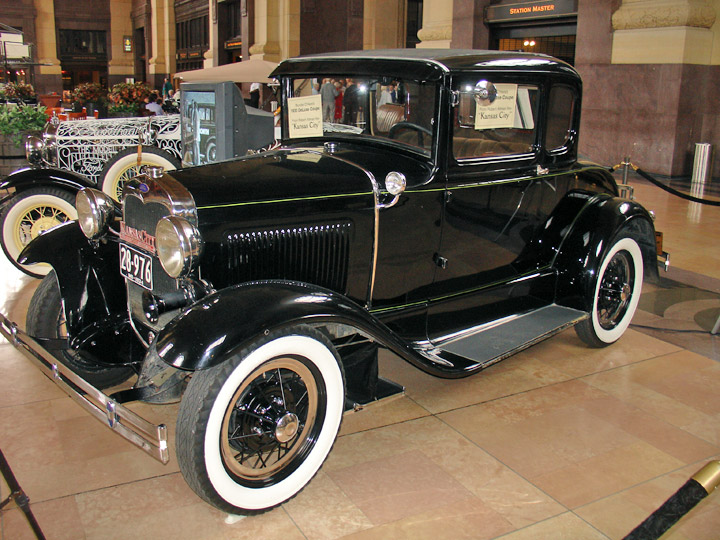 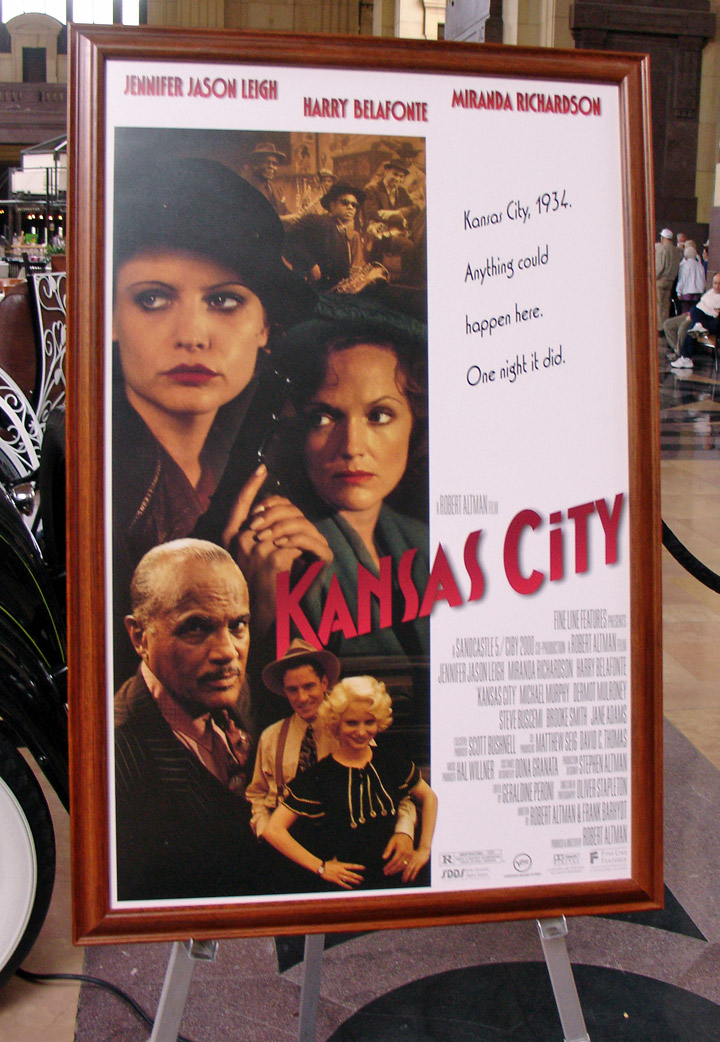 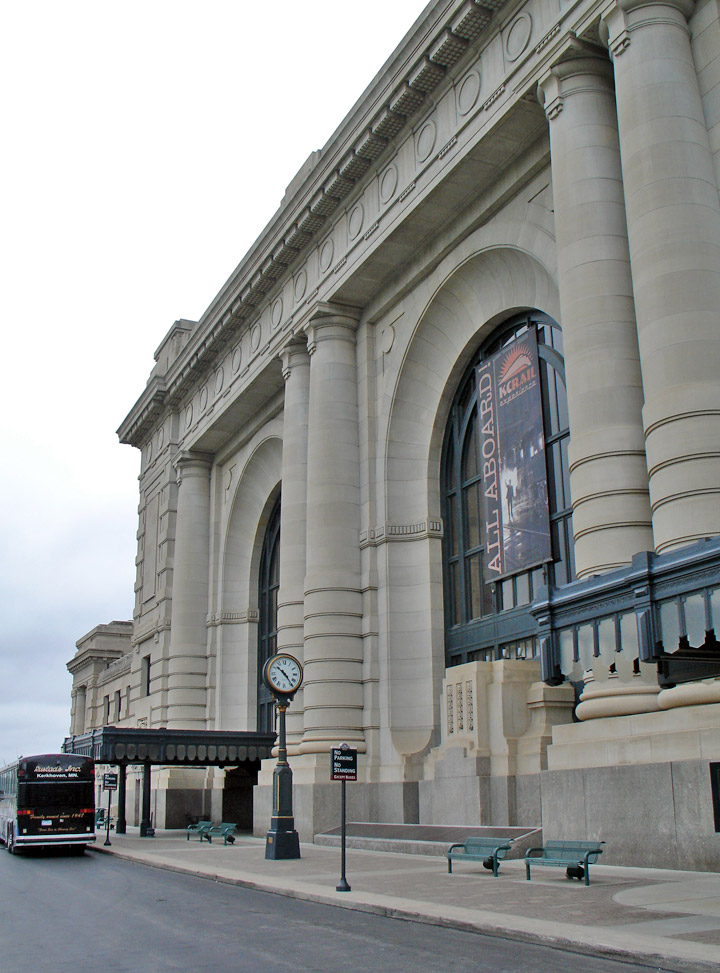 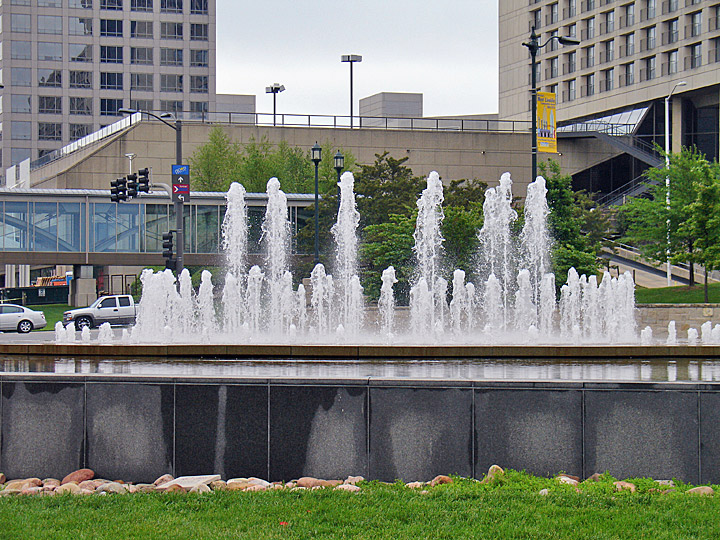 one of many fountains 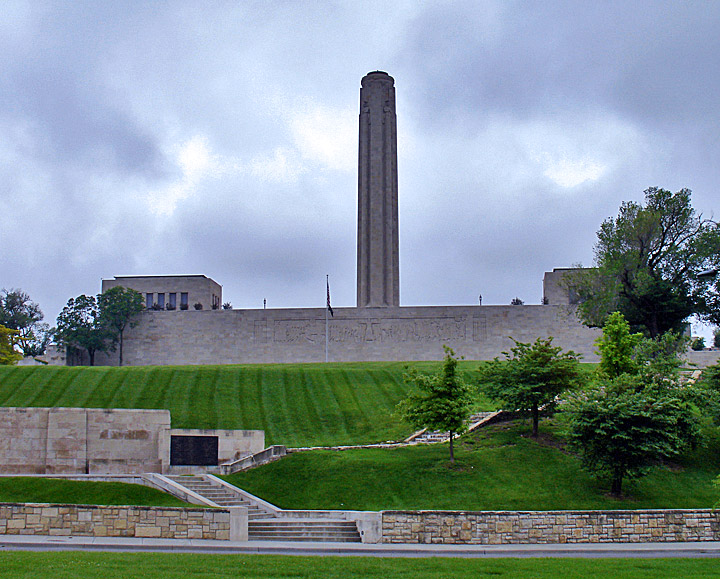 as seen from Union Station

“In honor of those who served in the world war in defense of liberty and our country.” – inscription, on the Liberty Memorial tower in Downtown Kansas City, Missouri, U.S. 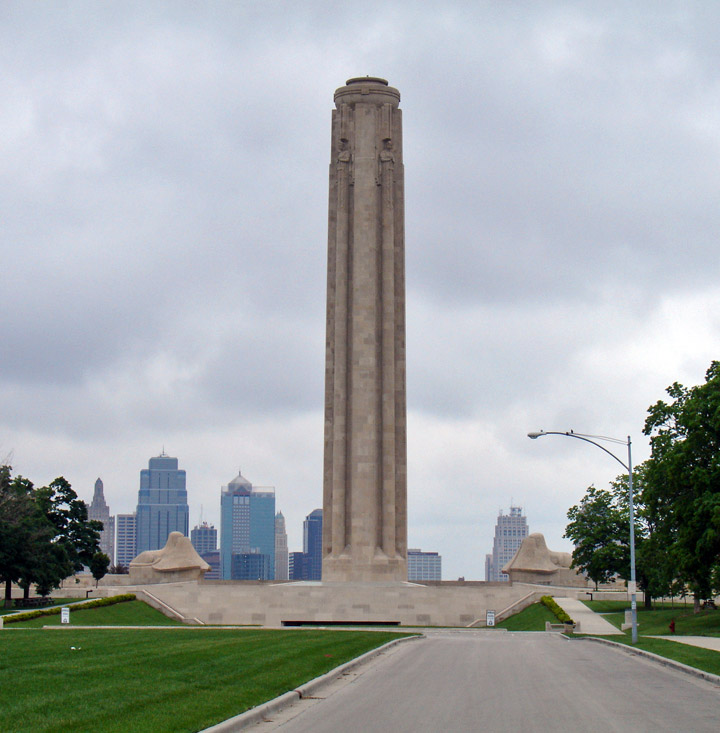 The quote above best depicts the reasons and emotions behind the raising of the Liberty Memorial Monument. World War I (1914-1918), which ended on the Western Front in Europe on November 11, 1918, had dramatically changed the world and deeply affected future generations. 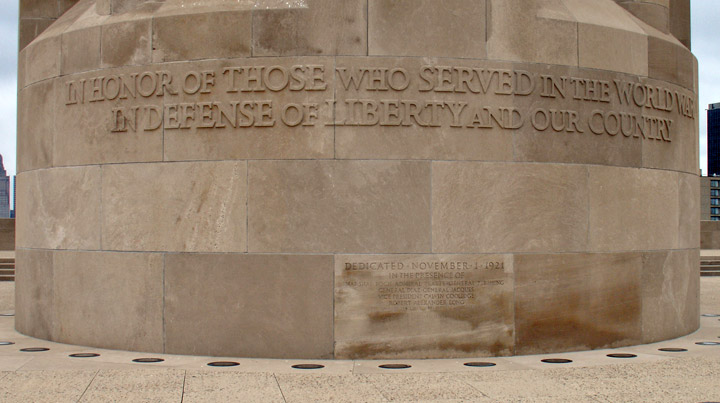 After the guns were silenced and the huge celebrations had died down, concerned citizens in the United States reflected on the past War and on the losses sustained. What could be done to honor and remember, they wondered. Just two weeks after the Armistice, a meeting of Kansas Citians brought forth the idea and need for the creation of a lasting monument to all men and women in the war and to those who died. 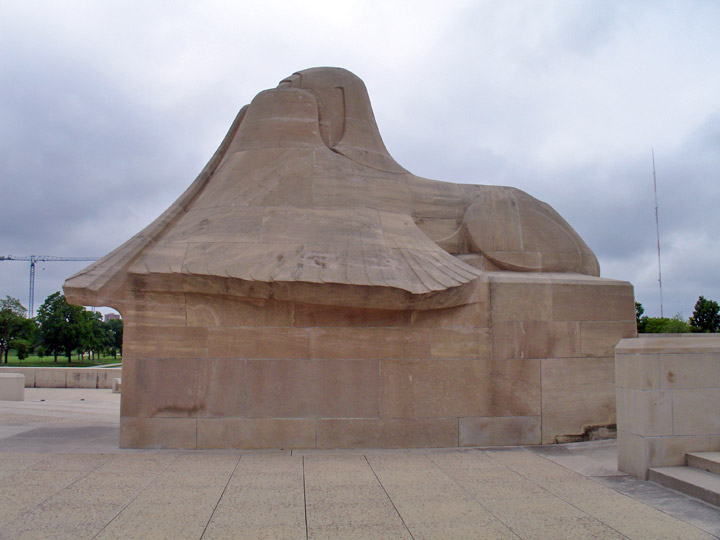 Sphinx in a shroud

R.A. Long, founding president of the Liberty Memorial Association stated: "From its inception it was intended that this Memorial should represent on the part of all people, a living expression for all time of the gratitude of a grateful people to those who offered and who gave their lives in defense of liberty and our country." 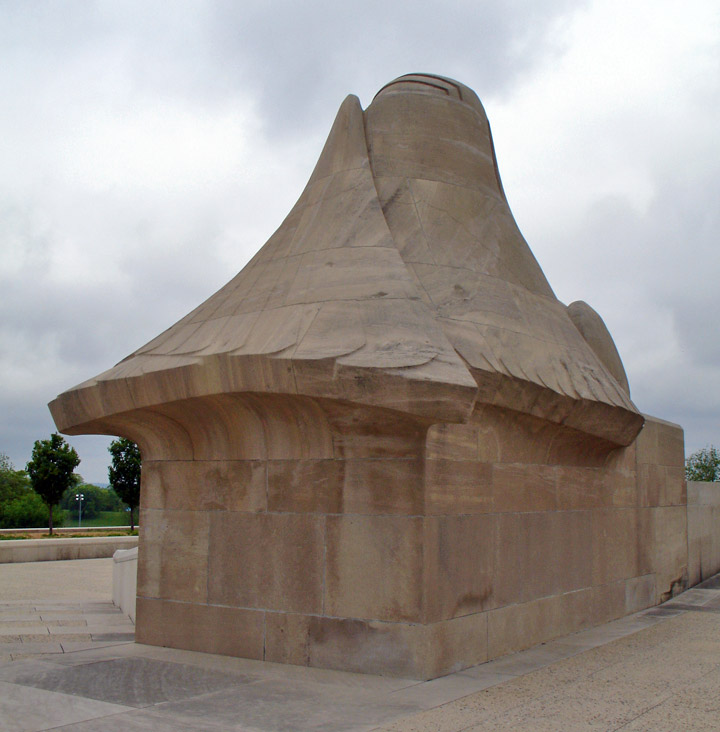 A community-based fund-raising drive in 1919, led by this Association, raised over $2,500,000 in less than two weeks through public subscription in Kansas City and around the nation. This staggering accomplishment reflected the passion of public opinion about the Great War, which so recently ended. Following the drive, a national architectural competition was held for monument designs by the American Institute of Architects. 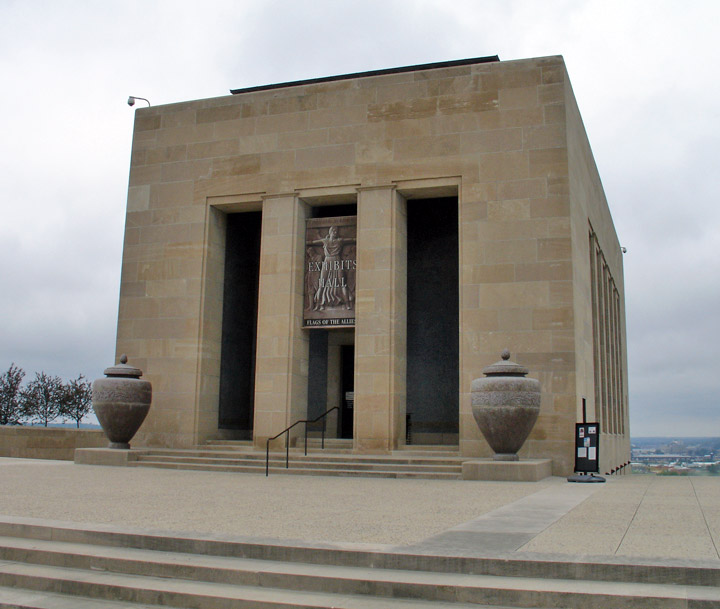 The site for the Liberty Memorial was dedicated on November 1, 1921. The main Allied military leaders spoke to a crowd of close to 200,000 people. It was the only time in history that these leaders were together at one place. In attendance were Lieutenant General Baron Jacques of Belgium; General Armando Diaz of Italy; Marshal Ferdinand Foch of France; General John J. Pershing of the United States; and Admiral Lord Earl Beatty of Great Britain.

After three years of construction, the completed Liberty Memorial opened on November 11, 1926 –eight years after the end of the War. President Calvin Coolidge delivered the dedication speech, in which he spoke of how "the magnitude of this memorial, and the broad base of popular support on which it rests, can scarcely fail to excite national wonder and admiration."