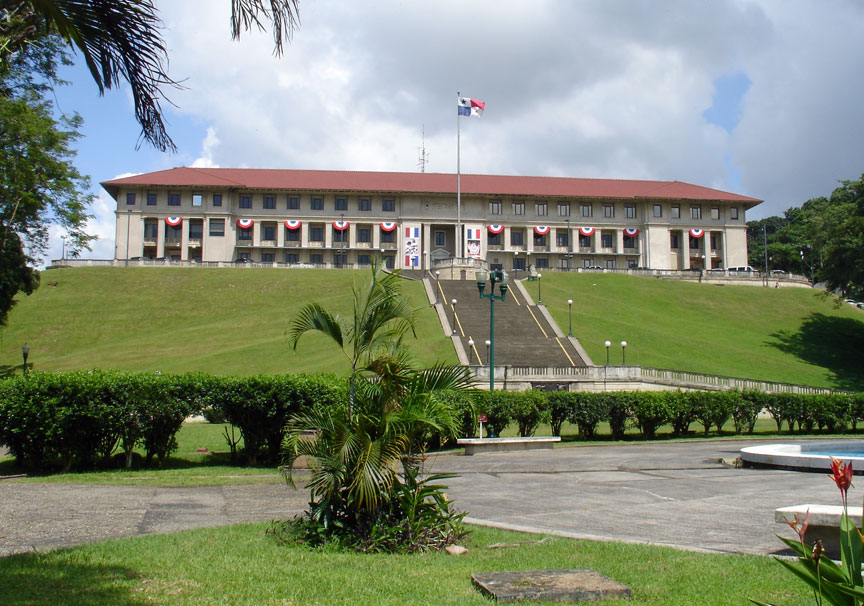 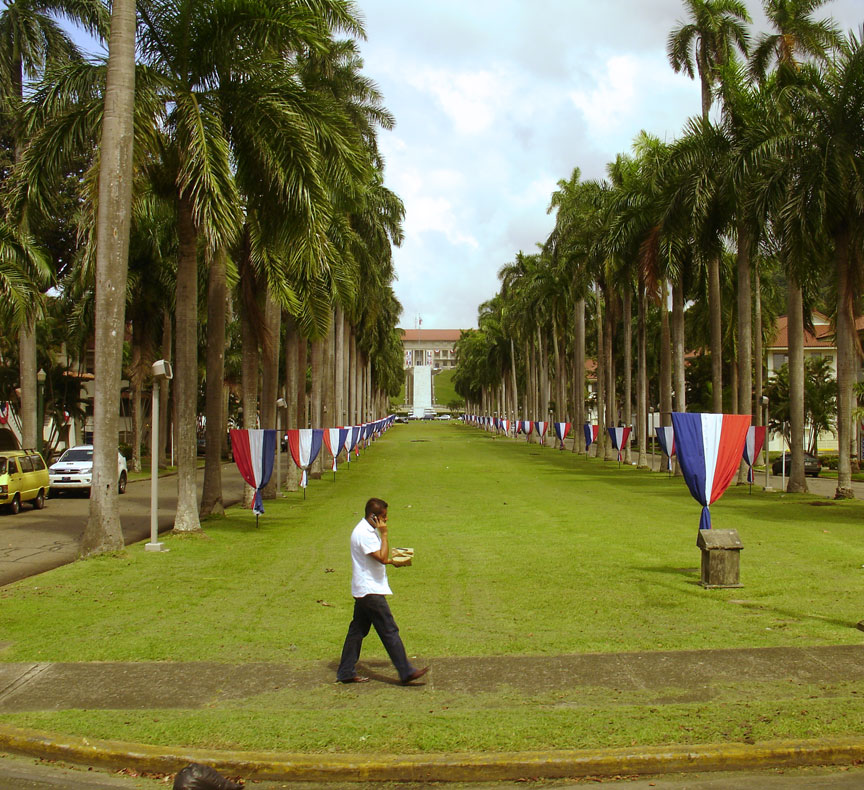 The Panama Canal Administration Building was inaugurated on July 15, 1914, exactly a month before the Canal itself. Since then, this veritable legacy from the past has continued to dominate the Balboa area from atop its rolling hill.

The Administration building houses the Panama Canal Authority's chief administrative offices, such as those of the Administrator, and the Deputy Administrator, located since 1914 in the North wing of the second floor, overlooking Balboa and the Canal's Pacific entrance.

bust of President Roosevelt
in the rotonda

Chief Engineer George W. Goethals set his sights on the construction of a permanent building to physically centralize administrative activities in 1912 - around the  same time the Gatum Locks and lake were receiving their finishing touches.

Austin W. Lord, hired from a New York architectural firm, traveled to Panama to study site conditions and develop designs that would dictate uniformity for a series of buildings in the Canal area..  By 1913, Lord had already developed plans for the Administration Building, the three locks control houses, the Balboa and Christobal train stations, the Gatum hydroelectric plant and the El Prado residences.

Inside one in immediately struck by the beauty of the high-domed rotunda, the main attraction of the historic building.  The dramatic murals, which adorn the cupola, along with the stately marble columns and floor, complete the impression. Exiting the rotunda, one comes upon the main staircase, a work of art in pink Tennessee marble, with elegant Mahogany banisters that denote the luxury in which the imposing structure was conceived.

According to records dating back to the construction era, the entire building cost $879,000, a sizable sum at the time.

The murals that adorn the rotunda were painted by New Yorker William Van Ingen, also celebrated for his  murals in the U.S. Library of Congress and the Philadelphia Mint. They depict the monumental labor involved in building the canal.

Together, these murals narrate the efforts, courage, and heroism of the multinational workforce the gouged through the Isthmus of Panama to unite the World's two greatest oceans.

Goethals is acclaimed for having had the foresight to record the monumental labor involved in the construction of the Canal through these poignant works of art, the largest group of murals by a U.S. artist in exhibit.

monument to Goethals
(Bridge of the Americas, going across the canal, in the background) 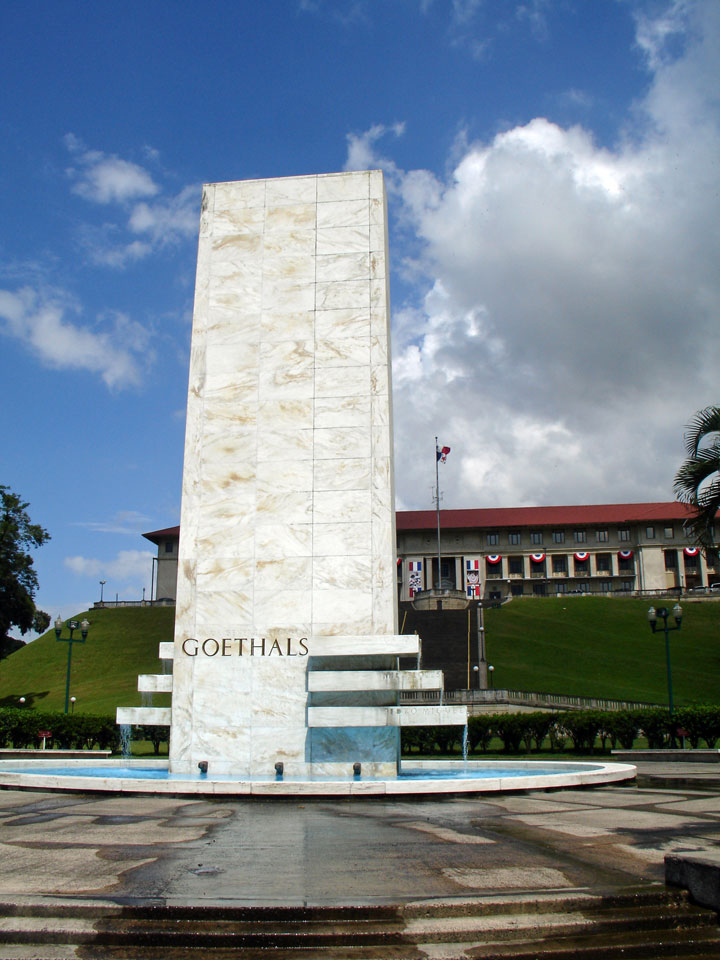 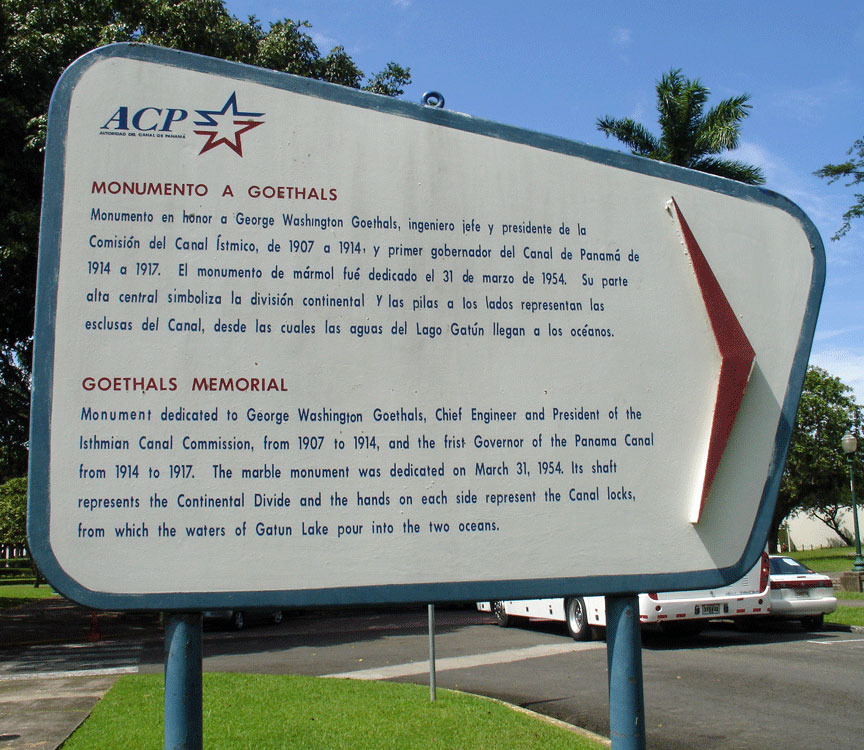 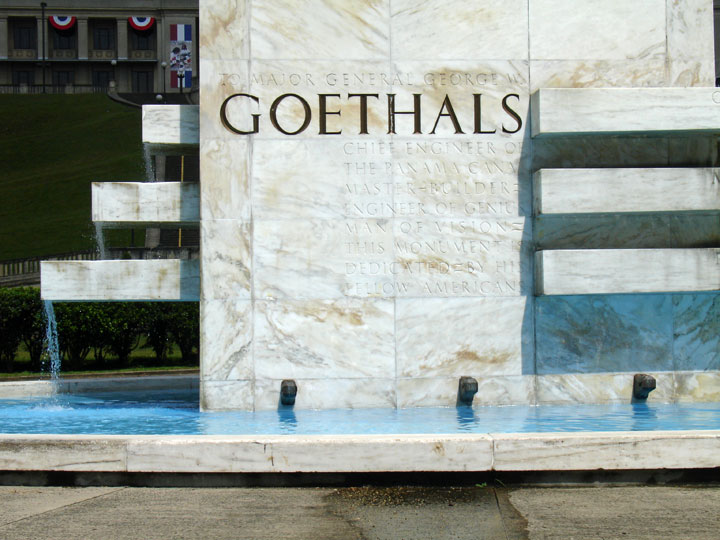 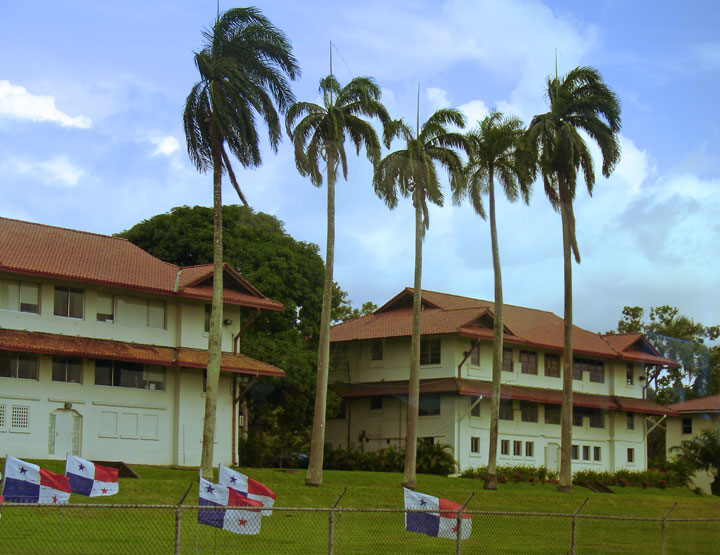 History of The Panama Canal

The Panama Canal is an artificial transportation waterway, built during 1904-1914, that serves as a transport canal for international trade, recreational use and irrigation purposes. To this purpose, it reduces the long distance travel of cargo ships because it connects the Pacific and Atlantic Oceans, thereby reducing their journeys by thousands of miles. The canal, a.k.a. “Big Ditch”, is regarded as the eighth man-made wonder of the world due to its size and the large volume of shipping vessels it can accommodate.

The earliest known attempt to construct the canal was in 1534 when the King of Spain (Charles V) suggested that a route created through Panama would reduce the distances journeyed by ships that travel from Spain to Peru, and provide measures to give the Spanish military an edge over the Portuguese. During 1788-1793, a feasibility study of the canal was carried out by Alessandro Malaspina, who then proposed a plan for the construction. This was later followed by the “Darien Scheme”, an unsuccessful effort designed to create an overland trade route launched in 1698 by the Kingdom of Scotland. In 1855, the Panama Railroad was built, as well as a survey on the proposed route, which was carried out by William Kennish.

French attempts to construct the Panama Canal began under the command of Ferdinand de Lesseps in 1880. Excavation on the region the canal was to be constructed in was hastily done, without properly investigating sensitive regions for hydrology and geology information. Due in part to the lack of planning, there was an outbreak of epidemics which affected and killed a large number of employees such as top French directors and laborers that were assigned to that project. In the long run, the French construction of the canal was abandoned due to these challenges.

Construction on the Panama Canal commenced in 1904 by the United States, after the French equipment and excavations were bought for 40 million dollars by President Theodore Roosevelt. This was possible because at the time the United States expressed interest in building a canal across the Isthmus, the Panamanian ideal was voted on and recognized by the Senate of the United States. The treaty was later endorsed by John M. Hay, United States Secretary of States and Dr Tomas Herran of Columbia.

The canal location was carefully investigated by the United States. The Chief Engineer, John Frank Stevens, convinced President Theodore Roosevelt of the feasibility and quality of a canal built with locks and dams. Diseases were kept under control, especially malaria and yellow fever, mostly thanks to the work of Dr. Carlos Finlay. A Cuban scientist and physician, he identified the mosquito as being the carrier of malaria fever.

Explosives were used to break up hundreds of cubic yards of materials, and were carried away in railroad cars with the help of steam shovels that were fixed on railroad tracks. Some equipment used for the construction includes: enormous steam powered cranes, rock crushers, dredges, cement mixers and power drills. French equipment, such as hydraulic crushers, was replaced by American machinery. In addition, extensive electric generators and large distribution systems were built. And in 1907, George Washington Goethals was appointed as chief engineer of the canal, after the resignation of John Frank Stephens.

The canal was finally completed in 1914, and was officially opened the same year.

Life After The Canal Was Built

The Madden dam was constructed in the 1930s to prevent shortage of water to the canal. It was constructed above Gatun Lake, and across the Chagres River. Madden Lake was also created to act as a backup source to store water for the canal. However, by 1939, a larger lock was constructed and other expansive excavations were carried out to accommodate bigger ships. Today, the 51 miles long Panama Canal is regarded as one of the world’s greatest engineering accomplishments ever achieved.

In 1999, on December 31st, the United States signed over the rights to the Panama Canal to Panama.

More Canals Around The World

Created for various purposes, there are many other canals around the world. Some of these include the Amsterdam-Rhine, Stockholm, Suez, Alappuzha, Nan Madol, Suzhou and Bruges Canals. One of the most well-known canal systems is located in Venice, Italy; it is common to hear a city with canals referred to as having a 'Venetian' quality.