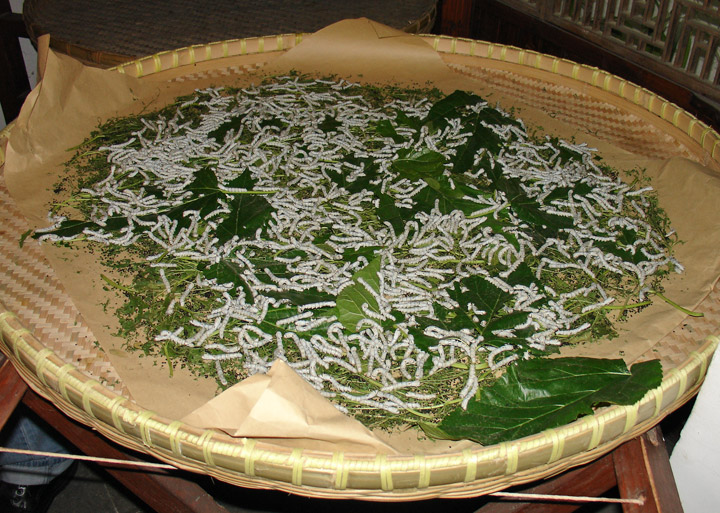 Silk is one of the oldest known textile fibers and, according to Chinese tradition, was used as long ago as the 27th century BC. The silkworm moth was originally a native of China, and for about 30 centuries the gathering and weaving of silk was a secret process, known only to the Chinese. Tradition credits Hsi-ling-shi, the 14-year-old bride of the Emperor Huang Ti, with the discovery of the potential of the cocoon and the invention of the first silk reel. China successfully guarded the secret until AD300, when Japan, and later India, penetrated the secrecy. 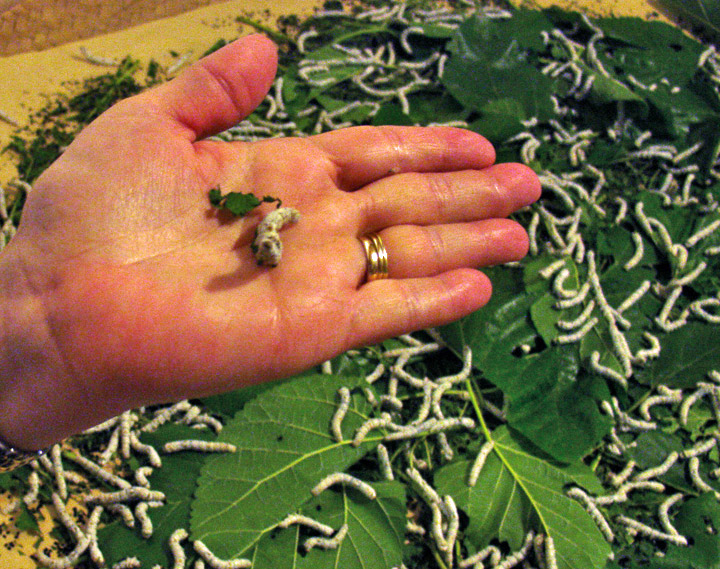 silkworm in the hand

Silkworm, common name for the silk-producing larvae of any of several species of moths. Silkworms possess a pair of specially modified salivary glands called silk glands, or sericteries, which are used in the production of cocoons. The silk glands secrete a clear, viscous fluid that is forced through openings, called spinnerets, on the mouthparts of the larva; the fluid hardens as it comes into contact with air. The diameter of the spinneret determines the thickness of the silk thread produced.

The best-known silkworm is the larvae of the common, domesticated silkworm moth. This moth, native to China, was introduced into Europe and western Asia in the 6th century AD and into North America in the 18th century. The moth has been cultivated for many centuries and is no longer known in the wild state. Breeders have produced many varieties of the moth, the most important of which produce three broods of young annually. 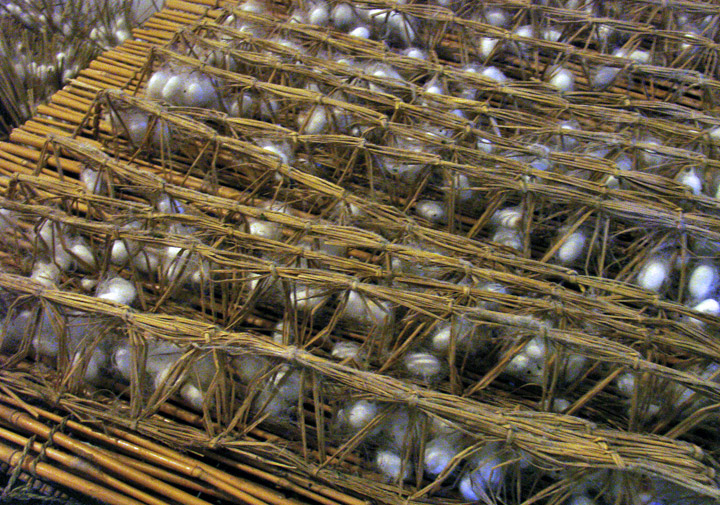 A typical adult silkworm moth is yellow or yellowish-white, with a thick, hairy body, and has a wingspread of about 3.8 cm (about 1.5 in). The adult has rudimentary mouthparts and does not eat during the short period of its mature existence; the female dies almost immediately after depositing the eggs, and the male lives only a short time thereafter. The female deposits 300 to 400 bluish eggs at a time; the eggs are fastened to a flat surface by a gummy substance secreted by the female. The larvae, which hatch in about ten days, are about 0.6 cm (about 0.25 in) long. The larvae feed on leaves of white mulberry, Osage orange, or lettuce. Silkworm caterpillars that are fed mulberry leaves produce the finest quality silk. Mature larvae are about 7.5 cm (about 3 in) long and yellowish-gray or dark gray in color. 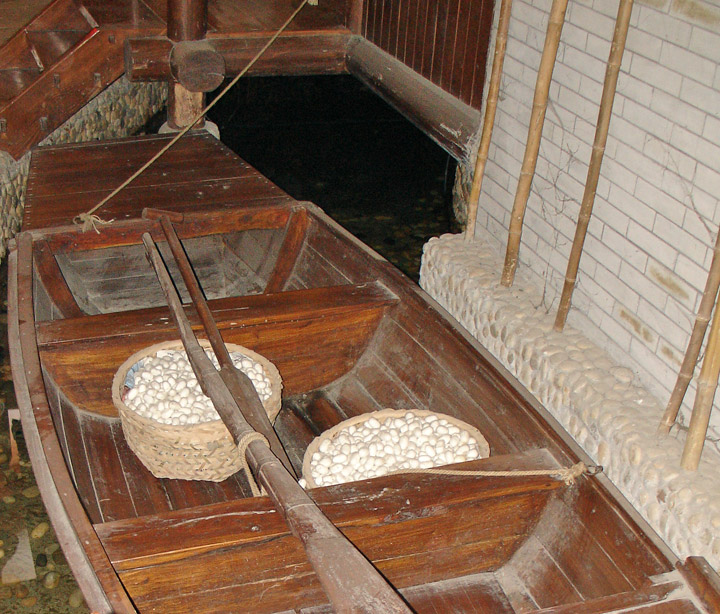 baskets of silk cocoons on the way to the factory

About six weeks after hatching, the common silkworm stops eating and spins its cocoon. The length of the individual fiber composing the cocoon varies from 300 to 900 m (1000 to 3000 ft). The silkworm pupates for about two weeks; if allowed to complete its pupation period, it emerges as an adult moth. Tearing during emergence damages the silken cocoon beyond commercial use. Therefore, in the commercial production of silk, only enough adult moths are allowed to emerge to ensure continuation of the species. Most of the silkworms are killed by heat, either by immersion in boiling water or by drying in ovens. 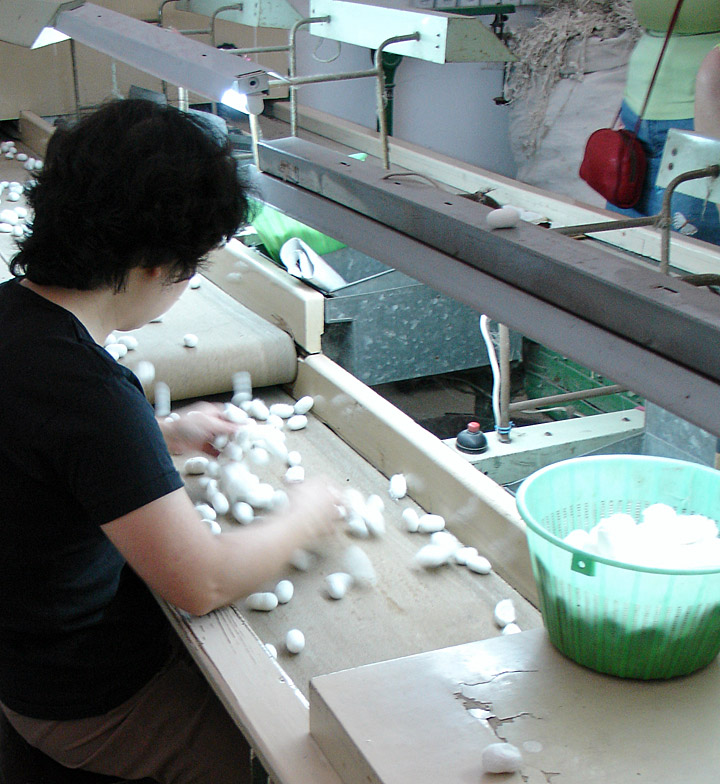 Sericulture, or the raising of silkworms, involves the incubation of the tiny eggs of the silkworm moth until they hatch and become worms. After hatching, the worms are placed under a layer of gauze, on which is spread a layer of finely chopped mulberry leaves. For six weeks, the worms eat almost continuously. At the end of this period, they are ready to spin their cocoons, and branches of trees or shrubs are placed in their rearing houses. The worms climb these branches and make their cocoons in one continuous thread, taking about eight days for the process. The amount of usable silk in each cocoon is small, and about 5500 silkworms are required to produce 1 kg (2.2 lb) of raw silk. 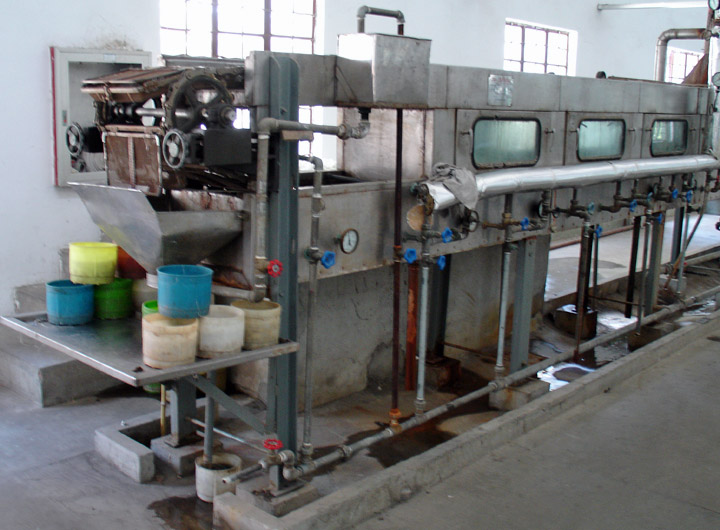 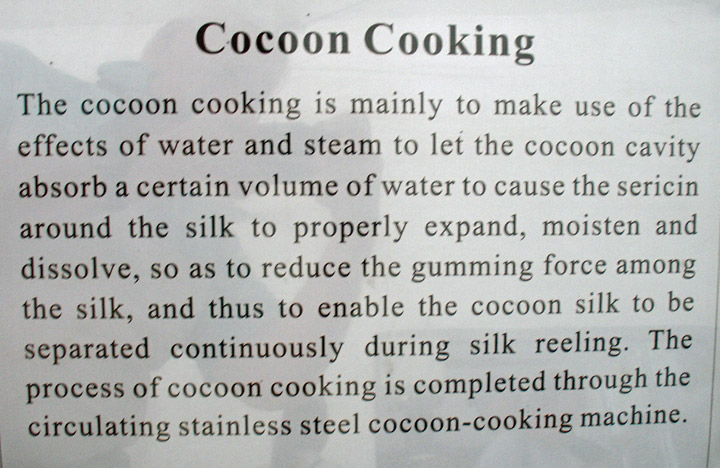 After the complete cocoons have been gathered, the initial step in silk manufacture is to kill the insects inside them. Thus, the cocoons are first boiled or treated in ovens, killing the insects by heat. The silk fiber is obtained from the cocoons by a delicate process known as reeling, or filature. The cocoons are first heated in boiling water to dissolve the gummy substance that holds the cocoon filament in place. After this heating, the filaments from four to eight cocoons are joined and twisted and are then combined with a number of other similarly twisted filaments to make a thread that is wound on a reel. When each cocoon is unwound, it is replaced with another cocoon. The resulting thread, called raw silk, consists usually of 48 individual silk fibers. The thread is continuous and, unlike the threads spun from other natural fibers such as cotton and wool, is made up of extremely long fibers. Along with cocoons damaged by emerging worms used for breeding stock, the filaments from the coarse outer portion of the cocoon, which is removed by brushing before reeling, and the inner portion of the cocoon, which remains after reeling the raw silk, are mixed to produce a low grade of silk staple that is spun into yarn. 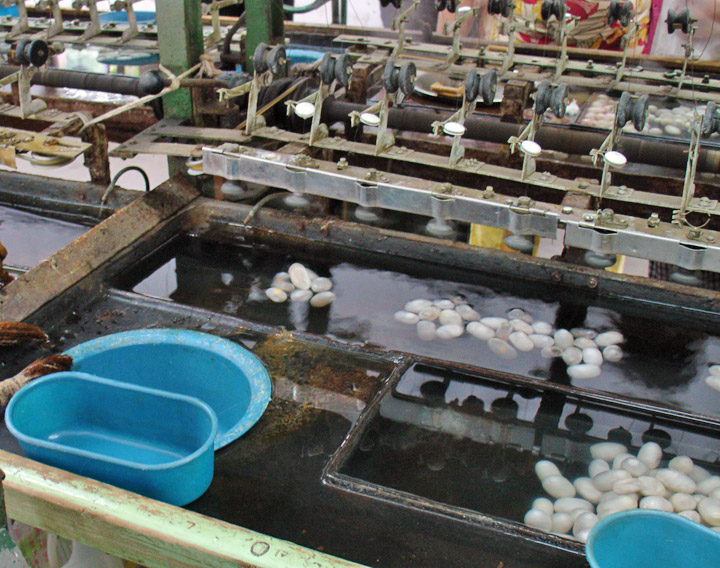 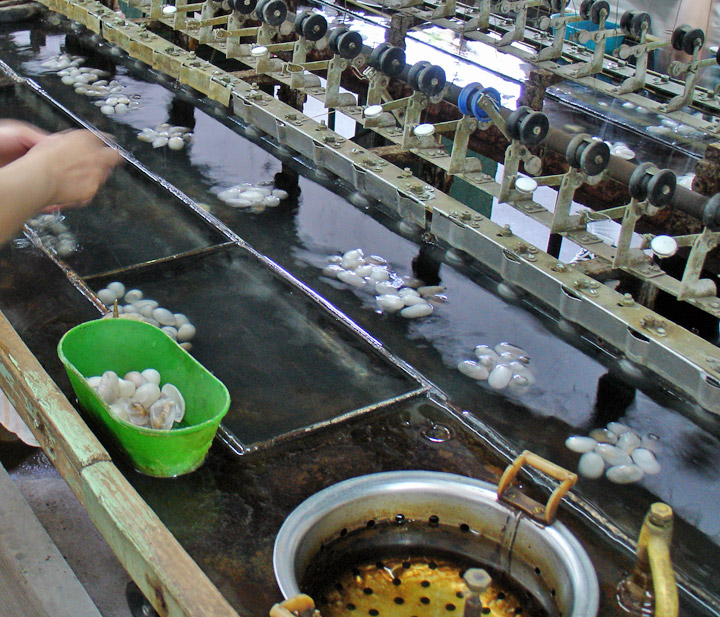 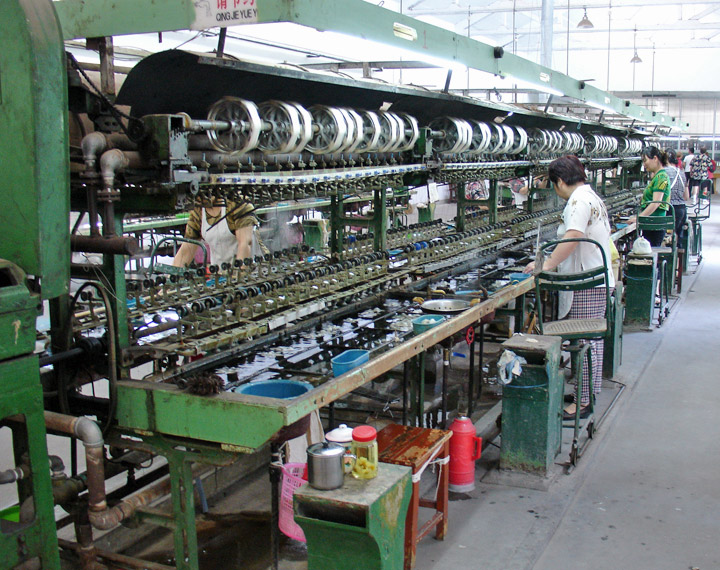 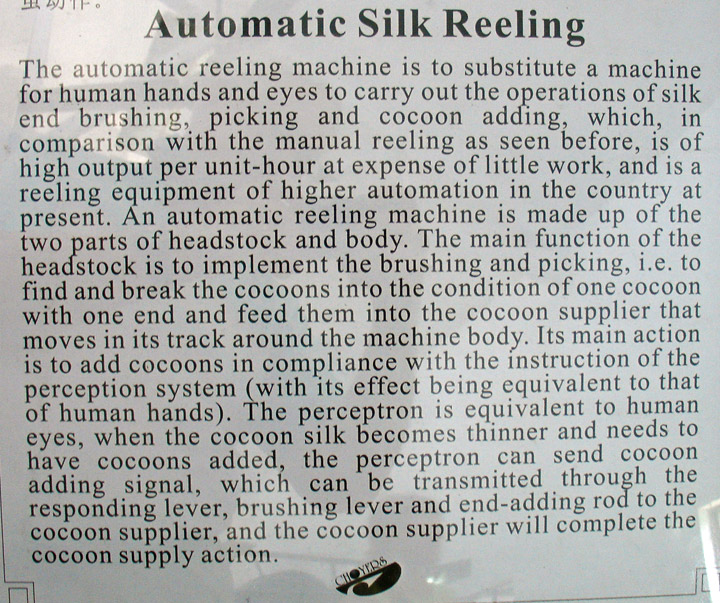 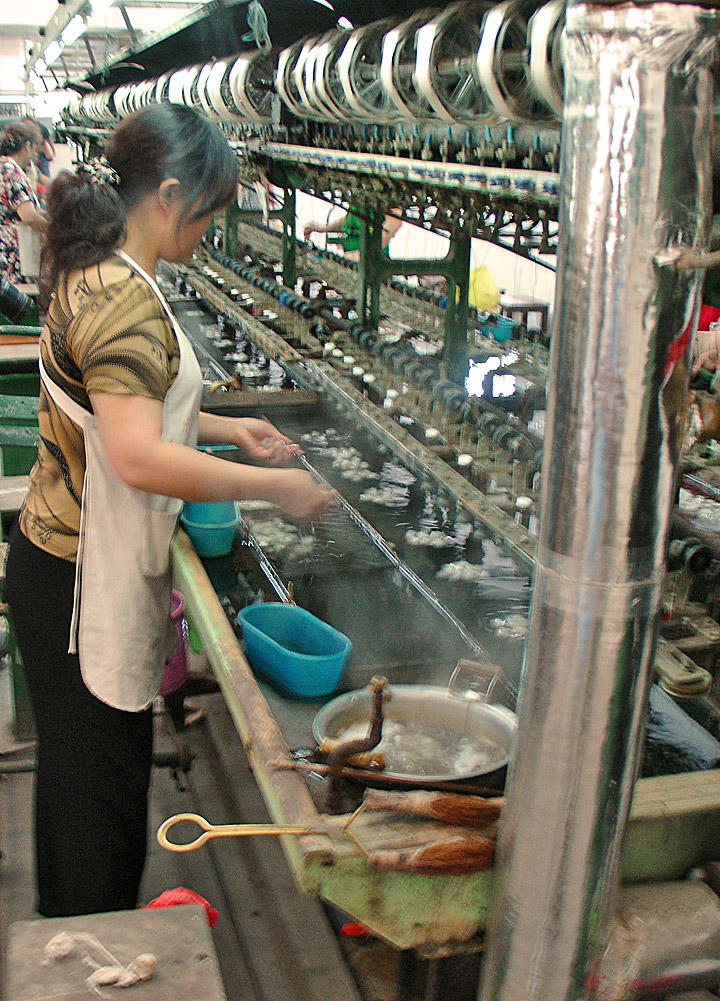 unwinding the silk filament from the cocoon 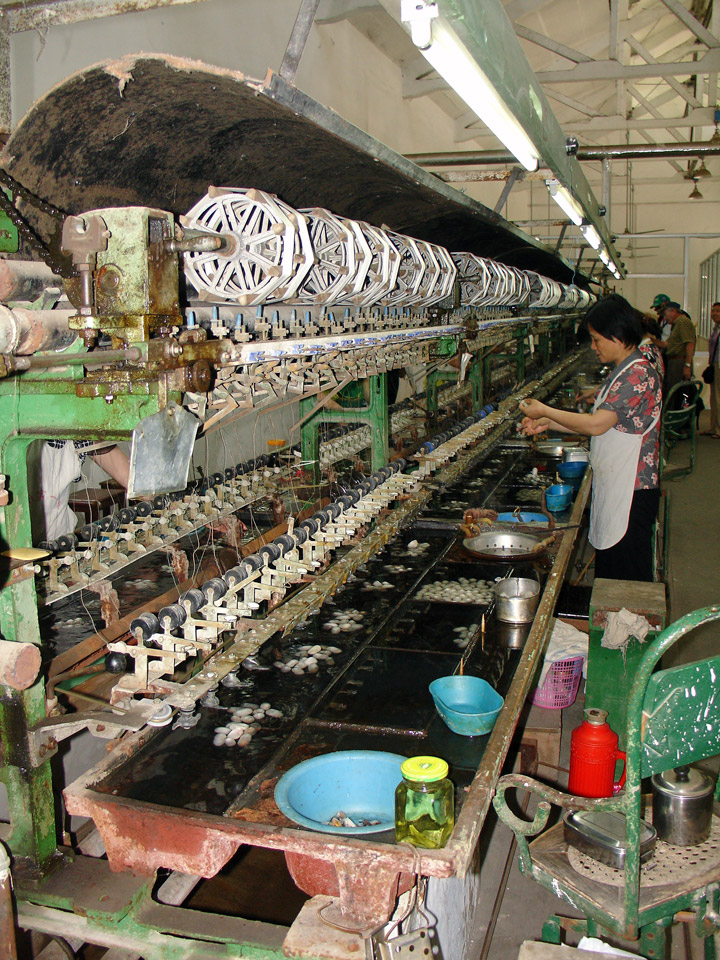 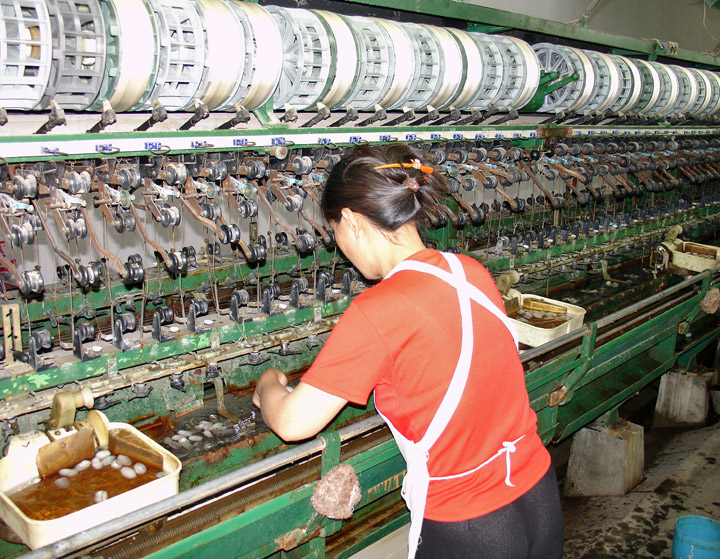 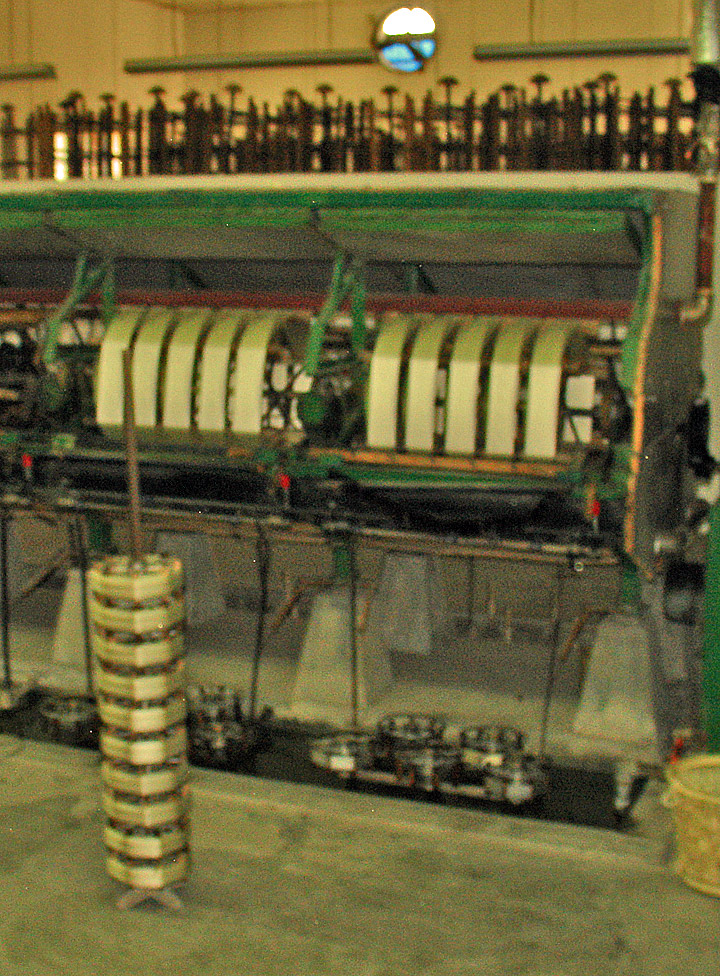 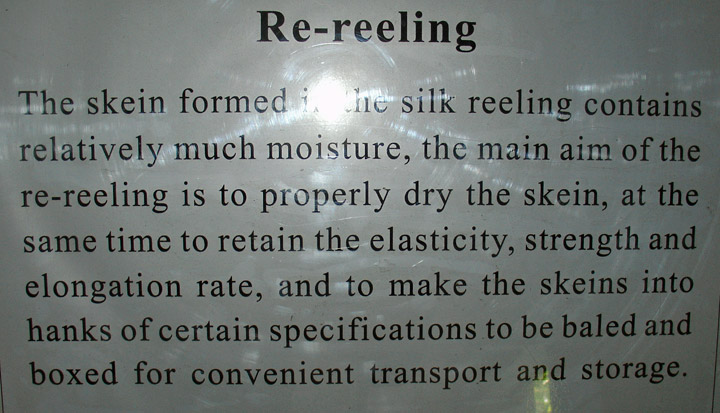 The next step in the processing of silk is the twisting of one or more threads of the raw silk into a strand sufficiently strong for weaving or knitting. This procedure is called throwing. Four different types of silk thread may thus be produced: organzine, crepe, tram, and thrown singles. Organzine is a thread made by giving the raw-silk thread a preliminary twist in one direction and then twisting two of these threads together in the opposite direction at the rate of about 4 turns/cm (10 turns/in). Crepe is similar to organzine but is twisted to a much greater extent, usually between 16 and 32 turns/cm (40 and 80 turns/in). Tram is made by twisting in only one direction two or more raw-silk threads, with 8 to 12 turns/cm (20 to 30 turns/in). Thrown singles are individual raw-silk threads that are twisted in only one direction, the number of turns depending on the quality of thread desired. In general, organzine thread is used for the warp threads of materials, and tram threads for the weft, or filling. Crepe thread is employed in the weaving of characteristic crinkly fabrics, and single thread is used for sheer fabrics. 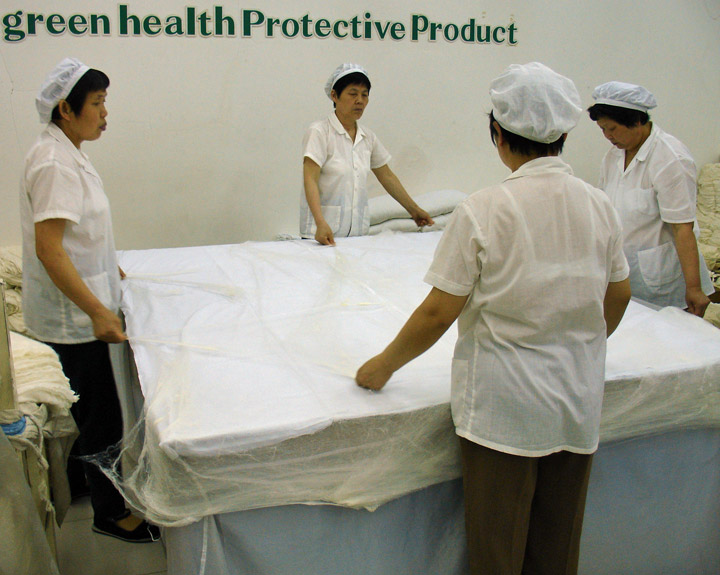 stretching the silk fabric to build up the all silk comforter 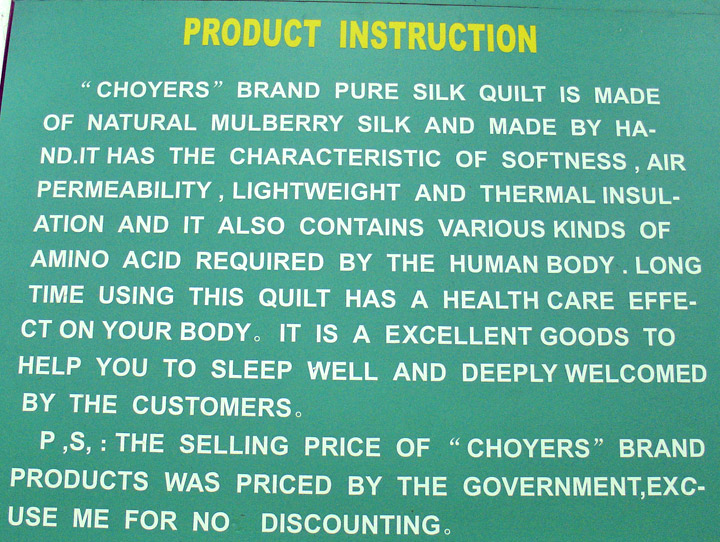 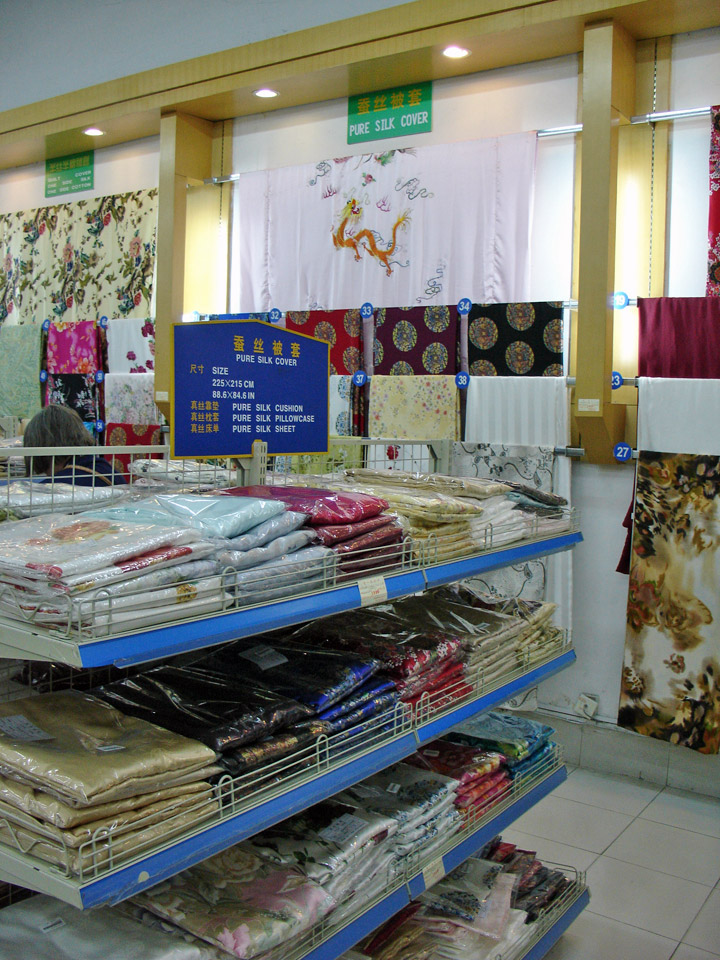 the products for sale in the factory shop 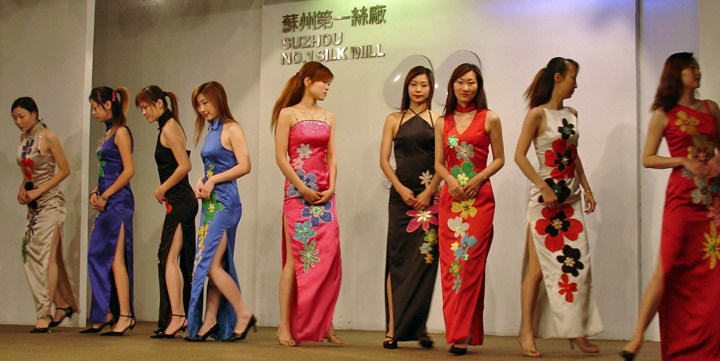 silk garments being shown at the factory Fashion Show