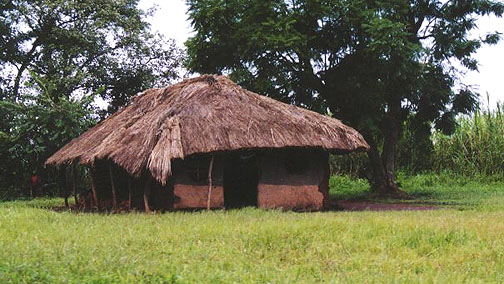 The area of Uganda includes Lake George and Lake Kyoga; parts of Lake Victoria, Lake Edward, and Lake Albert; and the Nile River from its inlet at Lake Victoria to Nimule on the Sudan frontier. The land surface is remarkably diversified, with elevated plains, vast forests, low swamps, arid depressions, and snowcapped peaks, the highest of which is Margherita Peak (5109 m/16,763 ft) in the Ruwenzori Range in the southwest. Much of the south is forested, and most of the north is covered with savanna. 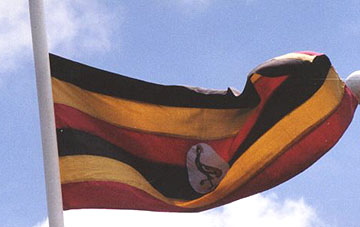 the flag
(African Crane, the State bird, in the center)

A composite of four kingdoms and many tribes, Uganda was a focal point of European rivalry before being ceded to Great Britain in 1890.

In the 1500 years before the Europeans arrived, the lake region of Africa, with its temperate climate and good soil, was a crossroads for invasions of Bantu agriculturists and Nilotic cattle herders. A fusion of these peoples occurred, and by the 15th century Bunyoro, the first of the great kingdoms, was founded. During the next two centuries its armies brought much of central Uganda under its control. These areas were ruled by governors subordinate to the great king of Bunyoro. In the late 18th century, during a period of conflict, the governor of Buganda declared his independence, and the new kingdom quickly became the major lake state. Two smaller kingdoms, Ankole and Toro, also became independent of Bunyoro. Each of these, with variations, modeled its society and political system on the earlier state. Buganda was ruled by a semidivine king (kabaka) who was advised by a council of great nobles (lukiko), and the land was divided among the nobility and farmed by the peasants.

Cattle were symbols of power and were owned by the nobility. The state was defended by a standing and conscript army obedient to the king's desires. Although powerful, Buganda never completely dominated the other kingdoms and scattered Bantu groups. 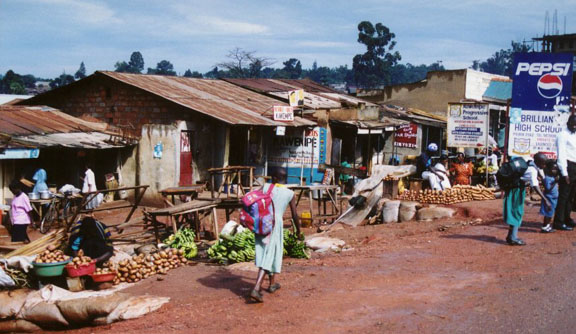 The first Europeans to visit Uganda were the British explorers John Hanning Speke and James Grant when they were searching for the source of the Nile in 1862. They were followed by Samuel White Baker and Charles George Gordon commanding Egyptian troops. 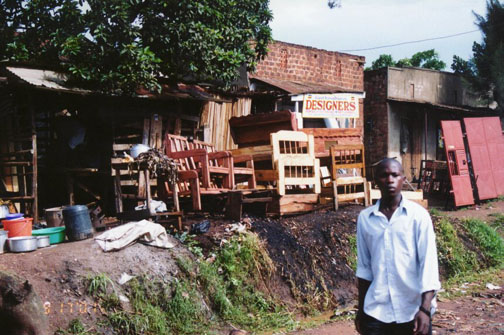 The Anglo-American explorer Henry Morton Stanley, welcomed by Kabaka Mutesa I (reigned 1852-1884), reported the king's eagerness to understand Christianity. Soon both Protestant and Roman Catholic missionaries were working in Buganda. Within a decade the factions they created caused a civil war. 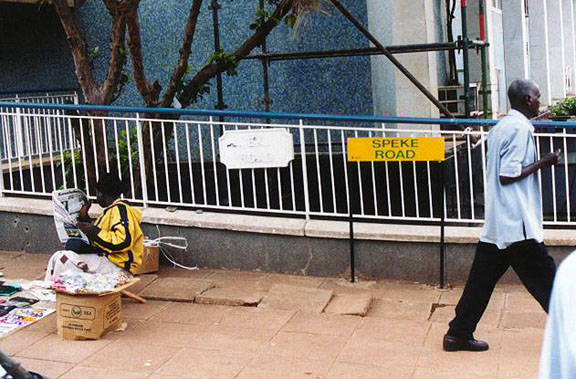 My Photos of Kampala

Once isolated, the region became by 1890 a major object of the European nations' scramble for African territory. Britain, after securing German recognition of its rights, moved to secure Buganda. Frederick Lugard, working for the British East Africa Company, ended the civil disturbances, and his successors used the Bugandan army to help conquer the other kingdoms and tribes. By 1896 a British protectorate administration had extended its authority over most of the region, and the name Uganda was adopted.

Final details concerning the administration of Uganda were settled by a series of agreements in 1900, the most comprehensive of which guaranteed special status to Buganda, including the continuation of its social and political system. Britain's almost 70 years of rule in Uganda was thus a centralized European bureaucracy superimposed on a federation of kingdoms and tribes. This worked well until the independence movements of the 1950s, when Buganda demanded separation from Uganda. Only after Kabaka Mutesa II was exiled for two years in 1953 was it possible to proceed with developing a united government. 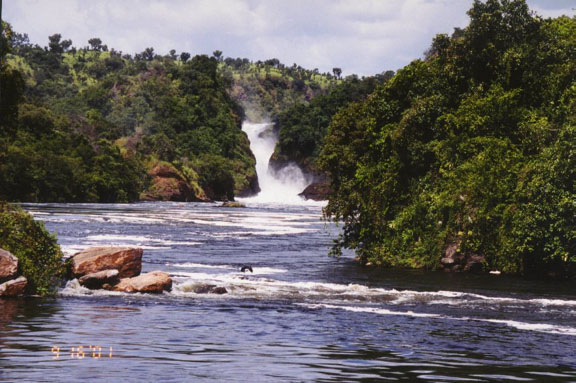 After much experimenting, a federal constitution was promulgated in April 1962. The Uganda People's Congress won the elections, and Milton Obote became prime minister. Independence was granted in October 1962. Dissension continued, however, and in May 1966 Obote sent the army into Buganda and drove the kabaka into exile. He then proclaimed a new republican constitution, which formally abolished the kingships, and became Uganda's first president of a unitary government. Bugandan recalcitrance, a falloff in the economy, and charges of corruption led to an army coup in January 1971. Power devolved upon the army commander, Idi Amin, who began eight years of misrule. He increased the size of the army, eliminated his political opponents, and began a reign of terror directed at the people of Buganda, Obote's Lango tribe, and their neighbors the Acholi. 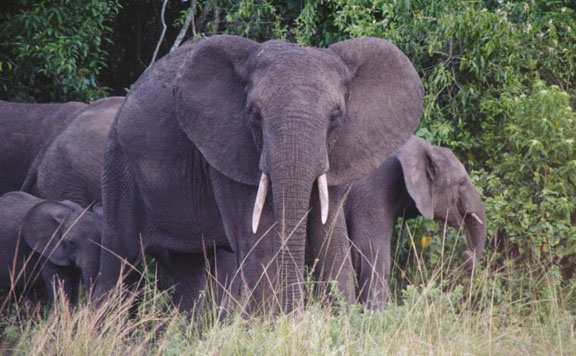 More Photos of Elephants in Uganda

He also expelled approximately 70,000 Asians from the country. By 1978 Uganda was bankrupt, and the government was dependent on massive loans from Arab states friendly to Amin. Uganda went to war with neighboring Tanzania in late 1978, and Tanzanian forces allied with Ugandan rebels drove Amin from the country early the following year. Three provisional presidents served before elections under a new constitution were held in December 1980. Obote's party was successful, and he became president once again of a changed Uganda. Once thriving, the nation had become an economic disaster, with an inflation rate of more than 200 percent, no consumer goods, few jobs, rampant thievery, famine in the north, and no effective government in the countryside. In 1982, after Tanzanian troops had been withdrawn, antigovernment guerrillas became active, and thousands of young men were arrested, suspected of being guerrillas. Thereafter, more than 100,000 Ugandans were killed or starved to death. 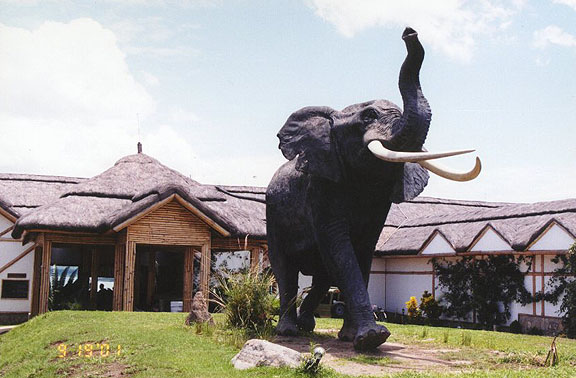 The constitutional government was overthrown in July 1985 in a coup by Acholi army officers; Obote fled the country and settled in Zambia. The new Acholi-dominated regime had little popular support, and quickly fell apart. After four days of fighting in Kampala in January 1986 National Resistance Army leader Yoweri Museveni took over the government. 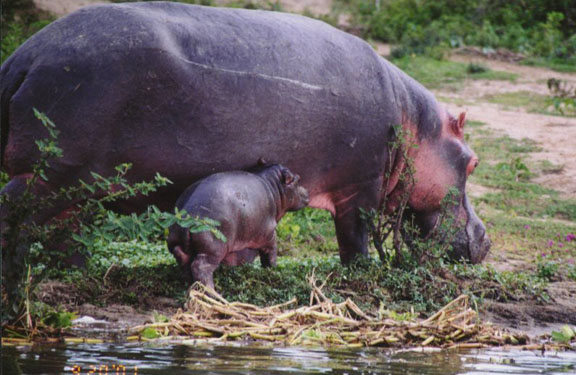 More Photos of Animals in the National Park

Since Museveni's ascension to power, Uganda's economy has prospered. Foreign investment has increased and many Asian Ugandans have returned to open businesses. Museveni forbade the creation and activity of political parties, believing that parties would form along ethnic lines and further divide the nation.

Ruwenzori Mountains
("Mountains of the Moon")

My Photos of the Ruwenzori Mountains

The early 1990s saw an upsurge in terrorism in northern Uganda, the home of Museveni's political enemies. In the mid-1990s hundreds of Ugandan soldiers and civilians were killed in attacks by the Lord's Resistance Army, a Christian fundamentalist rebel faction led by a former faith healer. A new constitution was adopted in 1995 that established a democratic, though nonparty, system of government. Despite unrest and dissent in the north, presidential and legislative elections proceeded as planned in 1996. Museveni won 74 percent of the vote in Uganda's first presidential elections in 16 years. Opposition candidates, forced to run unaffiliated with a political party and limited to one month of campaigning, claimed the vote was unfair, but the elections were widely endorsed by international observers. 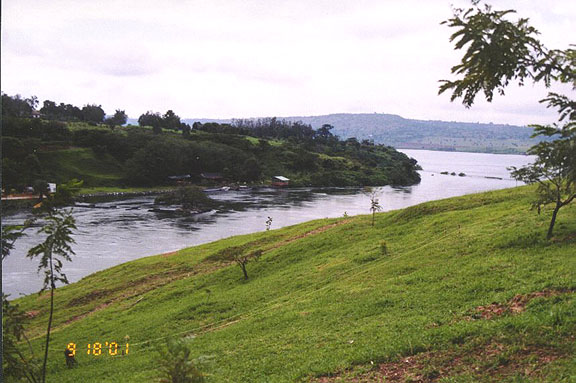 My Photos of Jinja