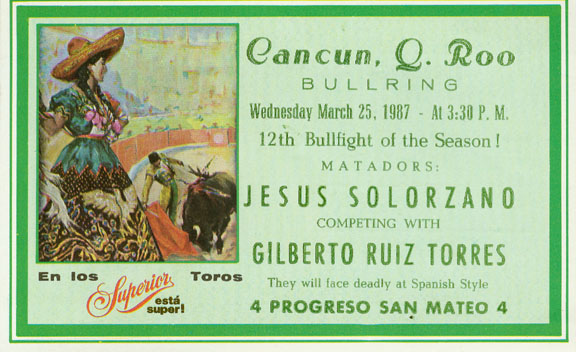 Six bulls, to be killed by three matadors, are usually required for one afternoon's corrida, and each encounter lasts about 15 minutes. At the appointed time, generally five o'clock, the three matadors, each followed by their assistants, the banderilleros and the picadors, march into the ring to the accompaniment of traditional paso doble ("march rhythm") music. The matadors (the term toreador, popularized by the French opera Carmen, is erroneous usage) are the stars of the show. They wear a distinctive costume, consisting of a silk jacket heavily embroidered in gold, skintight pants, and a montera (a bicorne hat). A traje de luces ("suit of lights"), as it is known, can cost several thousand dollars; a top matador must have at least six of them a season. 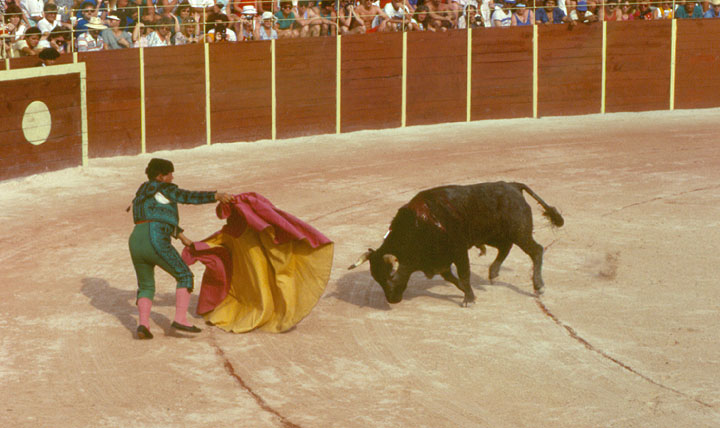 When a bull first comes into the arena out of the toril, or bull pen gate, the matador greets it with a series of maneuvers, or passes, with a large cape; these passes are usually verónicas, the basic cape maneuver (named for the woman who held out a cloth to Christ on his way to the crucifixion). 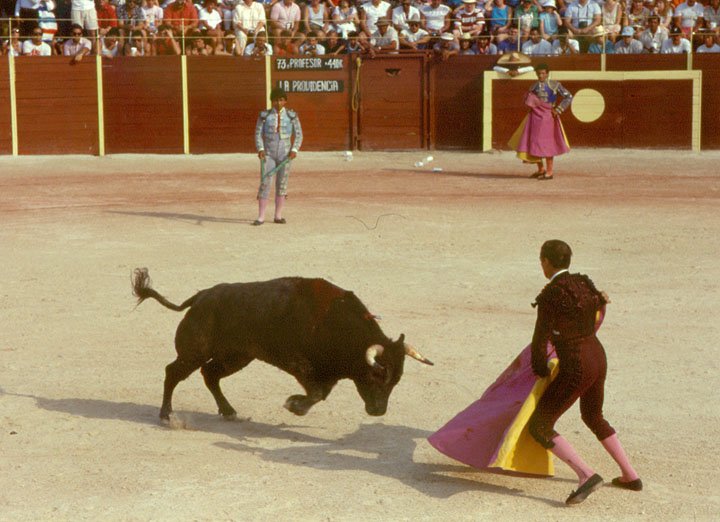 The amount of applause the matador receives is based on his proximity to the horns of the bull, his tranquility in the face of danger, and his grace in swinging the cape in front of an infuriated animal weighing more than 460 kg (more than 1000 lb). The bull instinctively goes for the cloth because it is a large, moving target, not because of its color; bulls are color-blind and charge just as readily at the inside of the cape, which is yellow.

Fighting bulls charge instantly at anything that moves because of their natural instinct and centuries of special breeding. Unlike domestic bulls, they do not have to be trained to charge, nor are they starved or tortured to make them savage. Those animals selected for the corrida are allowed to live a year longer than those assigned to the slaughter house. Bulls to be fought by novilleros ("beginners") are supposed to be three years old and those fought by full matadors are supposed to be at least four. 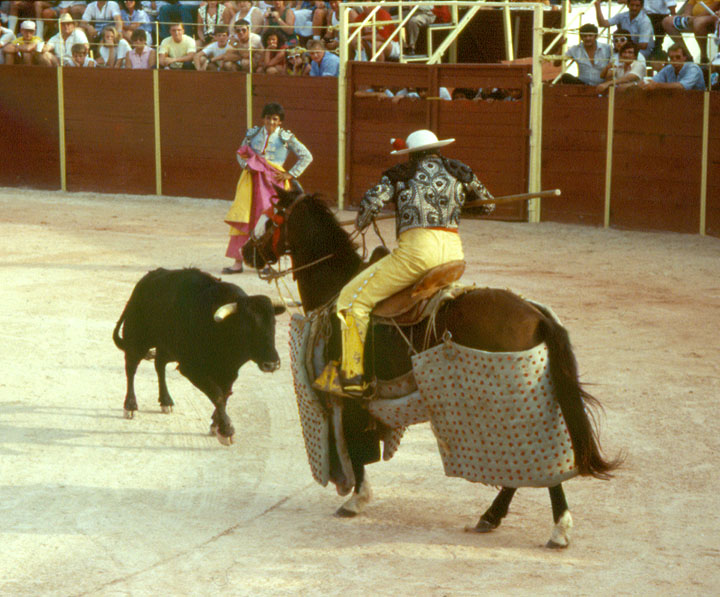 The second part of the corrida consists of the work of the picadors, bearing lances and mounted on horses (padded in compliance with a ruling passed in 1930 and therefore rarely injured). The picadors wear flat-brimmed, beige felt hats called castoreños, silver-embroidered jackets, chamois trousers, and steel leg armor. After three lancings or less, depending on the judgment of the president of the corrida for that day, a trumpet blows, and the banderilleros, working on foot, advance to place their banderillas (brightly adorned, barbed sticks) in the bull's shoulders in order to lower its head for the eventual kill. They wear costumes similar to those of their matadors but their jackets and pants are embroidered in silver. 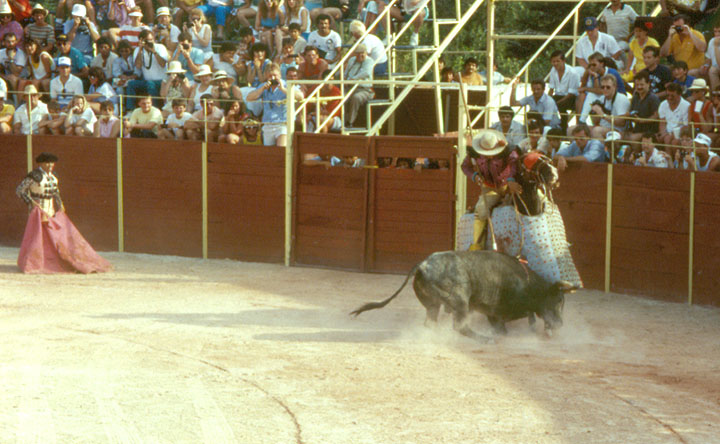 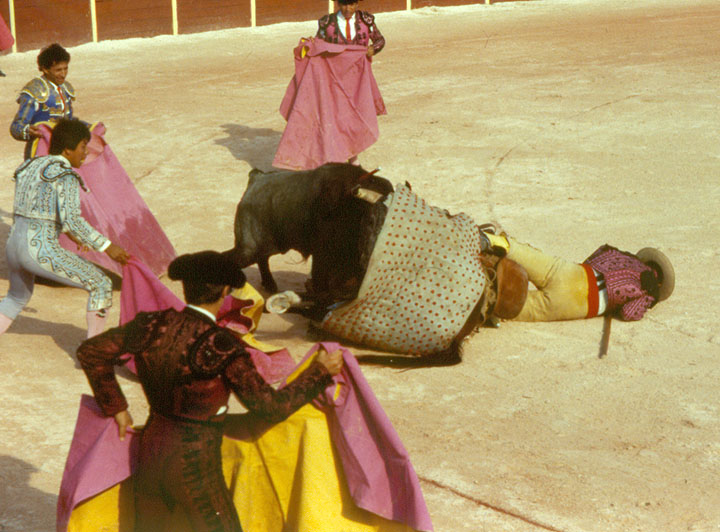 score one for the bull 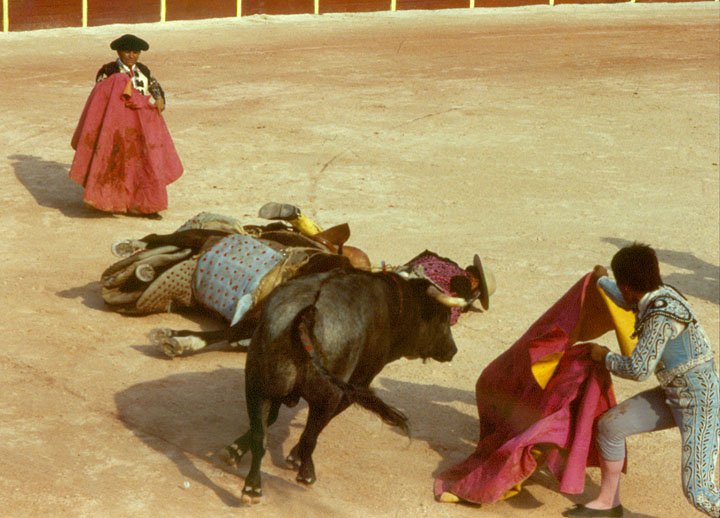 separating the bull from the fallen horse and rider 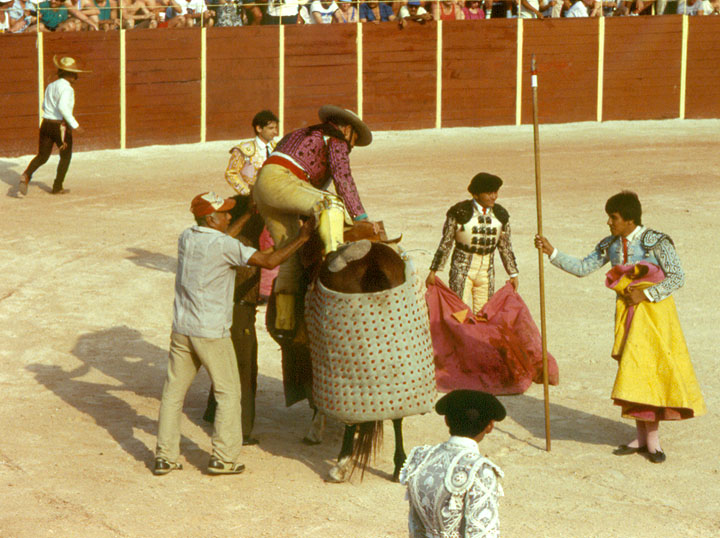 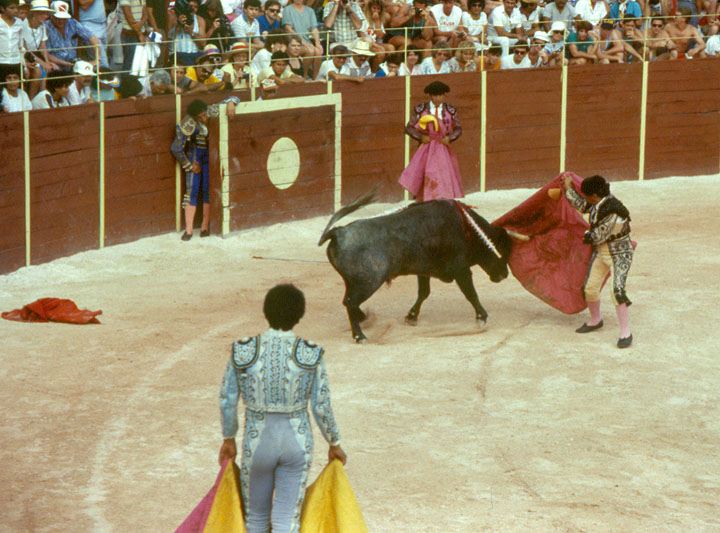 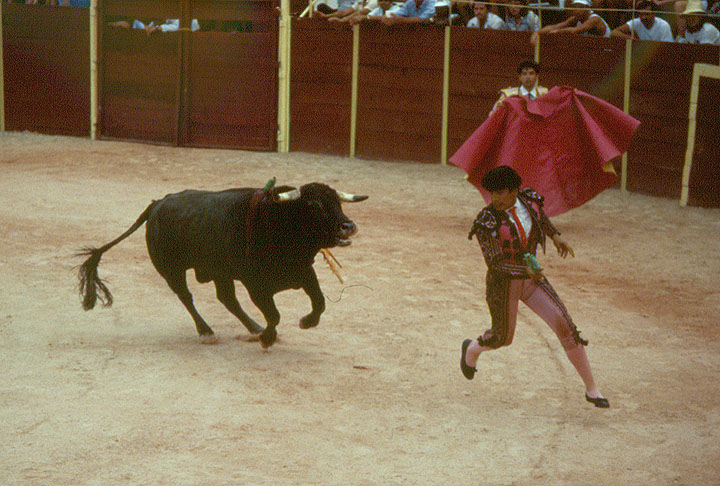 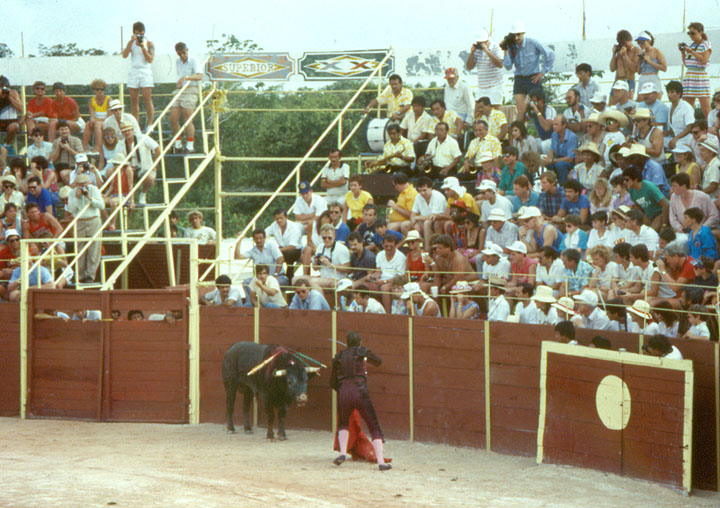 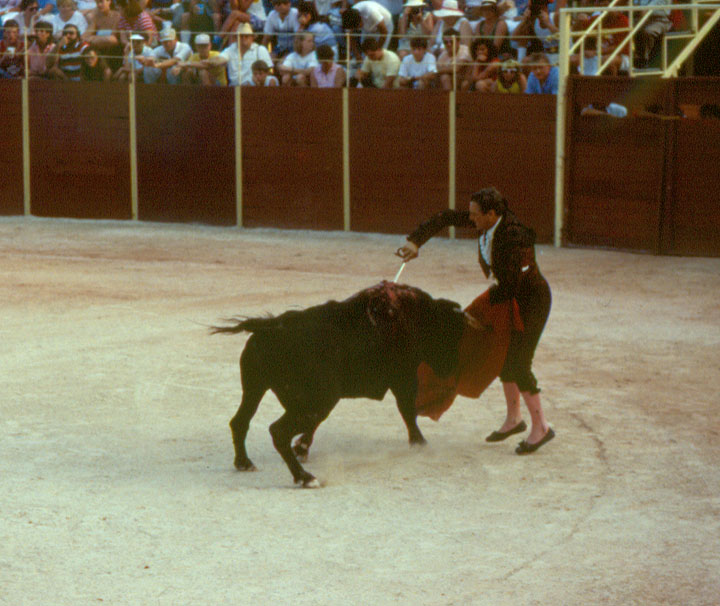 After several minutes spent in making passes, wherein the matador tries to stimulate the excitement of the crowd by working closer and closer to the horns, the fighter takes the sword and lines up the bull for the kill. The blade must go between the shoulder blades; because the space between them is very small, it is imperative that the front feet of the bull be together as the matador hurtles over the horns. The kill, properly done by aiming straight over the bull's horns and plunging the sword between its withers into the aorta region, requires discipline, training, and raw courage; for this reason it is known as the "moment of truth." 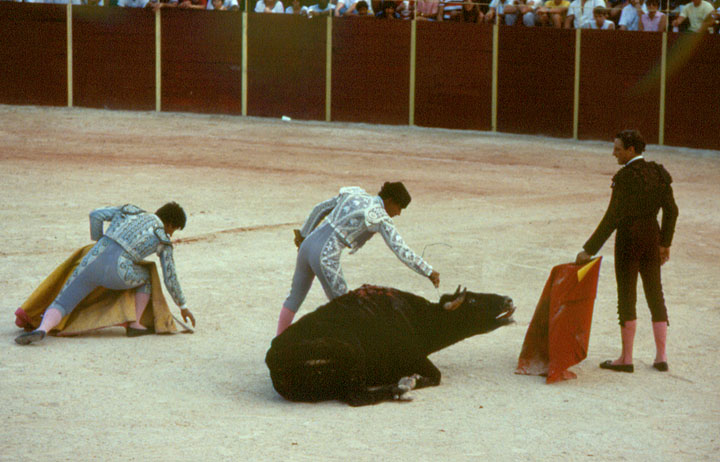 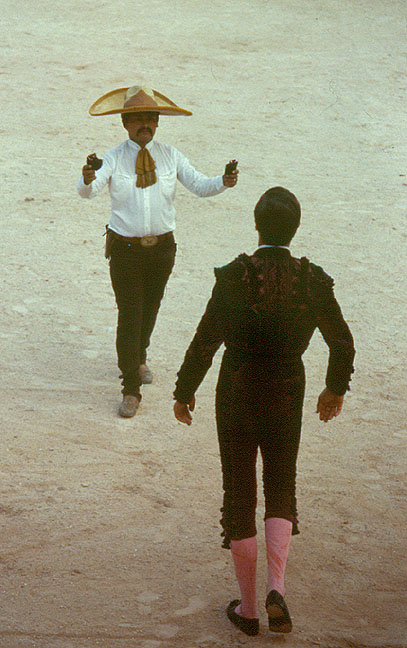 presentation of the ears 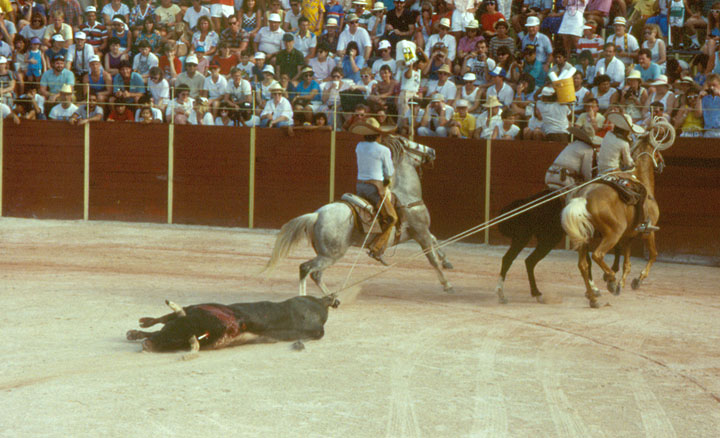 off to become hamburgers

Other Photos from the same Bull Fight