Colonial Cities of Mexico
photos from 1981 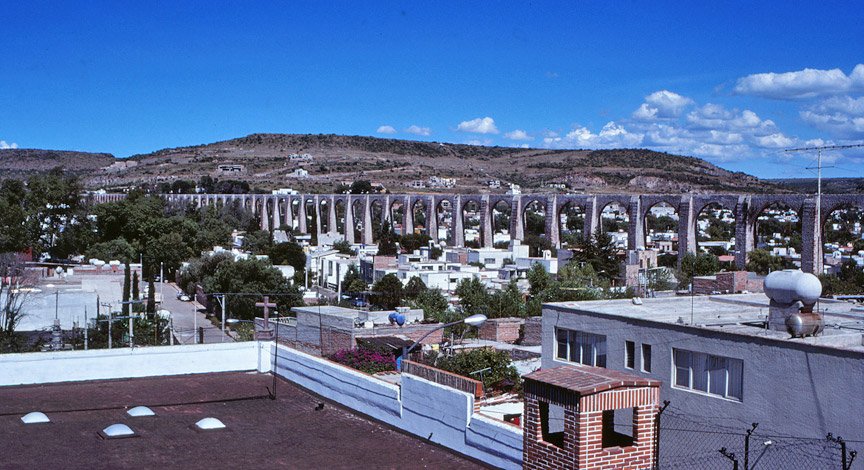 Constructed between 1726 and 1735, the aqueduct of Queretaro has gained national recognition as the symbol of the city. Built of local sandstone, its 74 arches reach nearly 1,400 yards east of the city; the highest arch soars some 75 feet above current-day street level.

The aqueduct brought drinking water into the city from springs located on what are now the outskirts of town. It was put into service in 1738, furnishing water to the convents and filling the public fountains, an event which occasioned two weeks of public celebration. 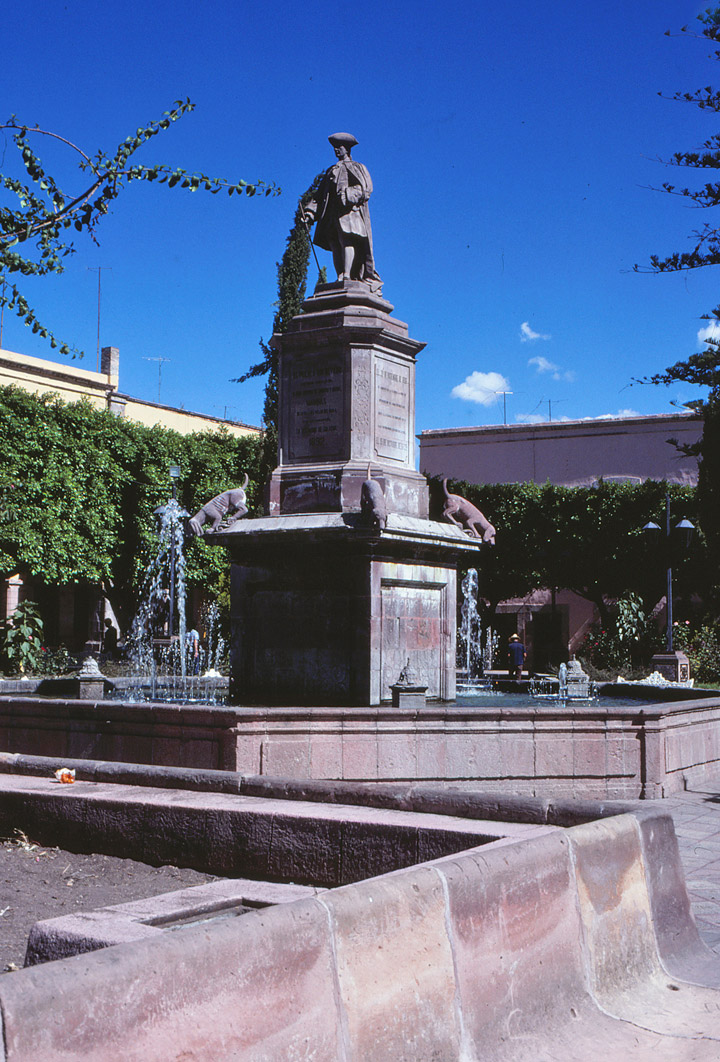 , central Mexico, capital of Querétaro State. It is a center for cotton milling, textile manufacturing, and food processing. It is also noted as a trading center for Mexican opals. The city has a 16th-century cathedral and is the site of Querétaro Historical Museum, the Autonomous University of Querétaro (1618), and a technological institute. An Aztec city, Querétaro was conquered by the Spanish in 1531. In 1810 it was the scene of the conspiracy that sparked the Mexican revolution against Spain. The city was also the site of the surrender (1867) of Emperor Maximilian of Mexico to the forces of the former president of Mexico Benito Pablo Juárez. In 1917 the present constitution of Mexico was adopted at Querétaro. Population (1995) 559,222. 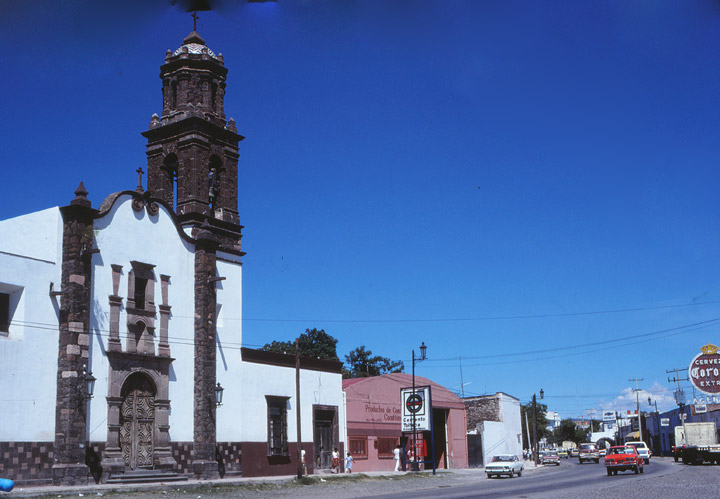 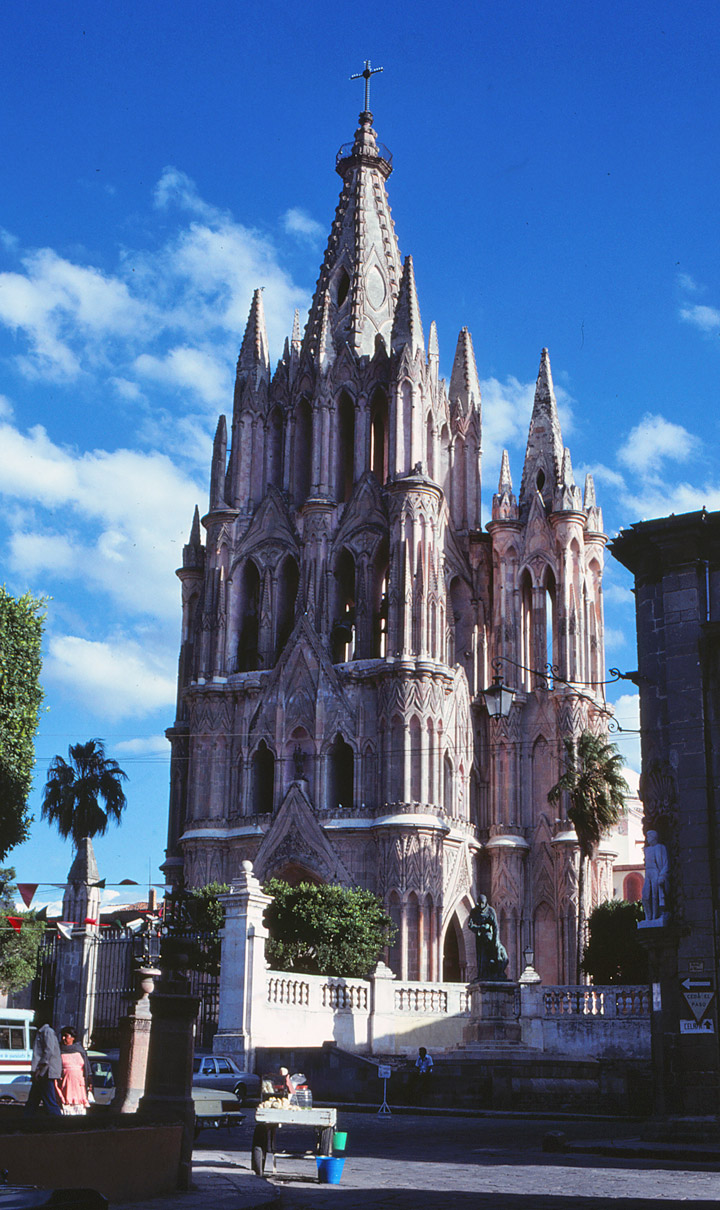 The Parroquia, the pseudo gothic church in the heart of
San Miguel de Allende.

Legend has it that the architect of the facade (added in 1888) of the church had never seen a gothic church and had to take his ideas from picture postcards of the gothic cathedrals of Europe. Apparently not much of a draftsman, he drew pictures of his concept in the dirt in front of the church to show his workmen what he envisioned. 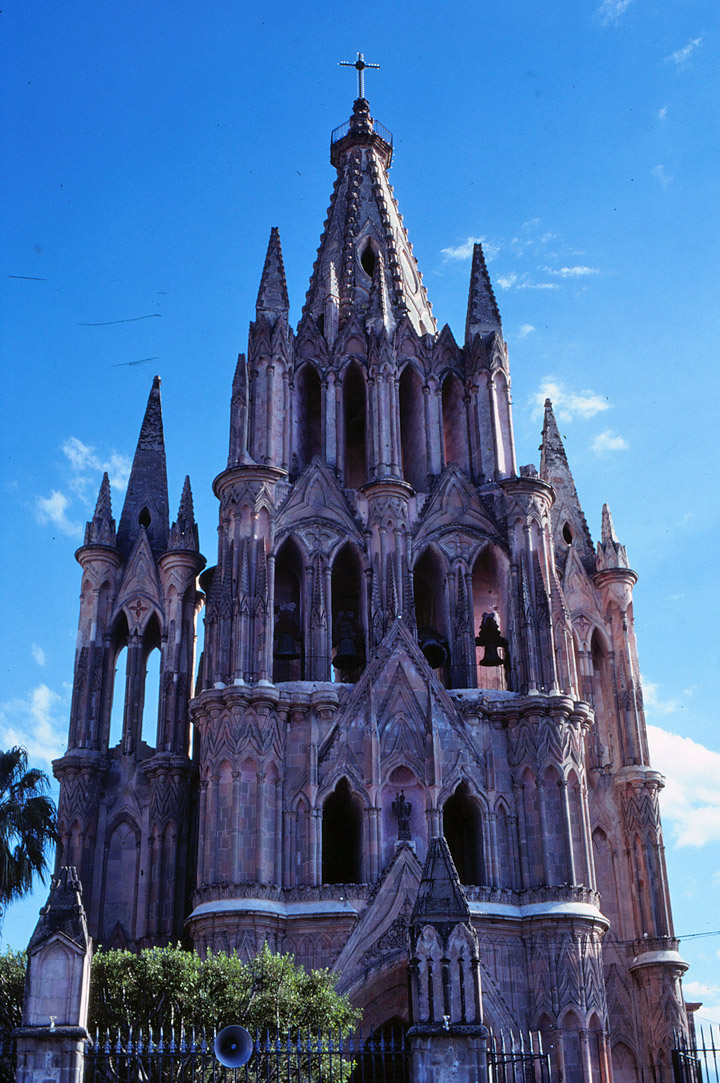 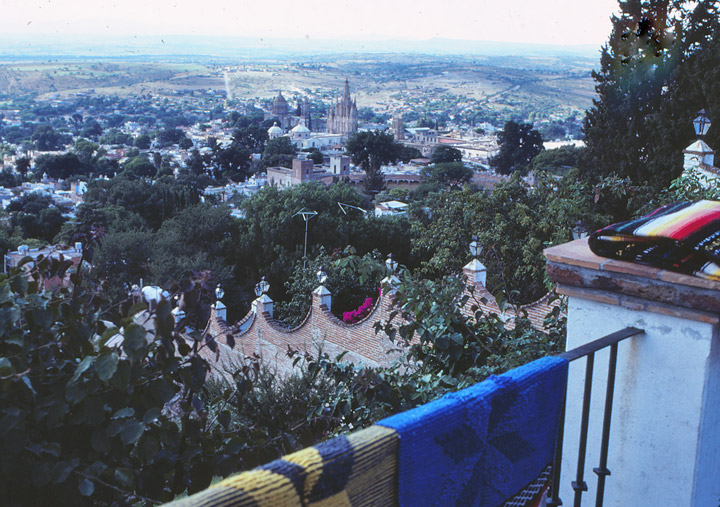 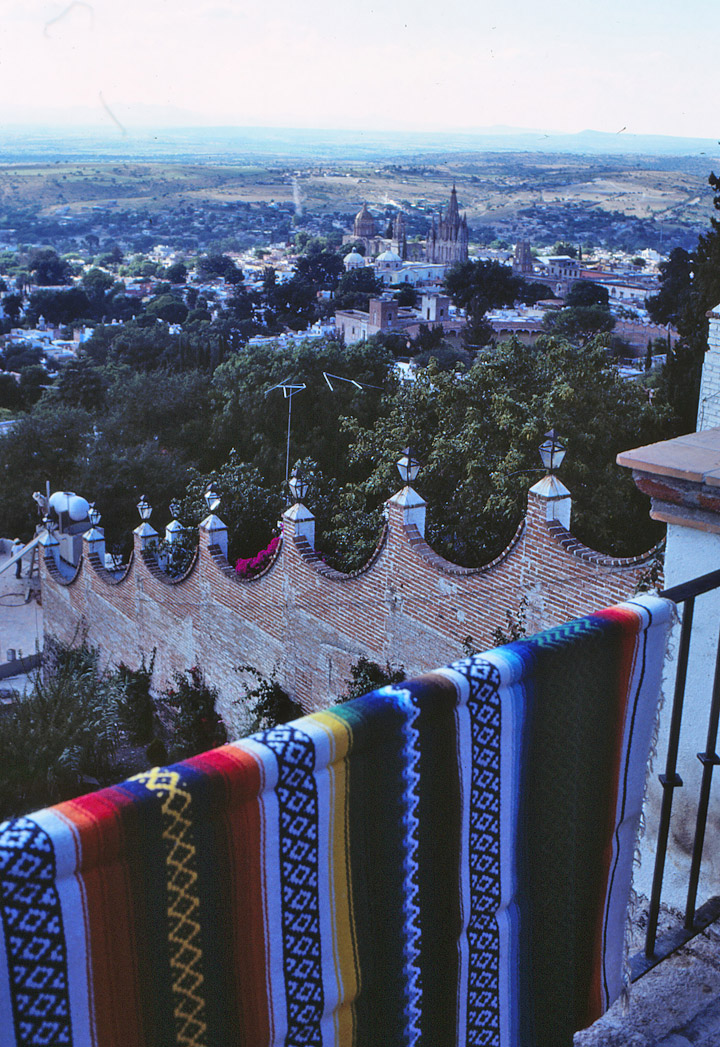 view of the city 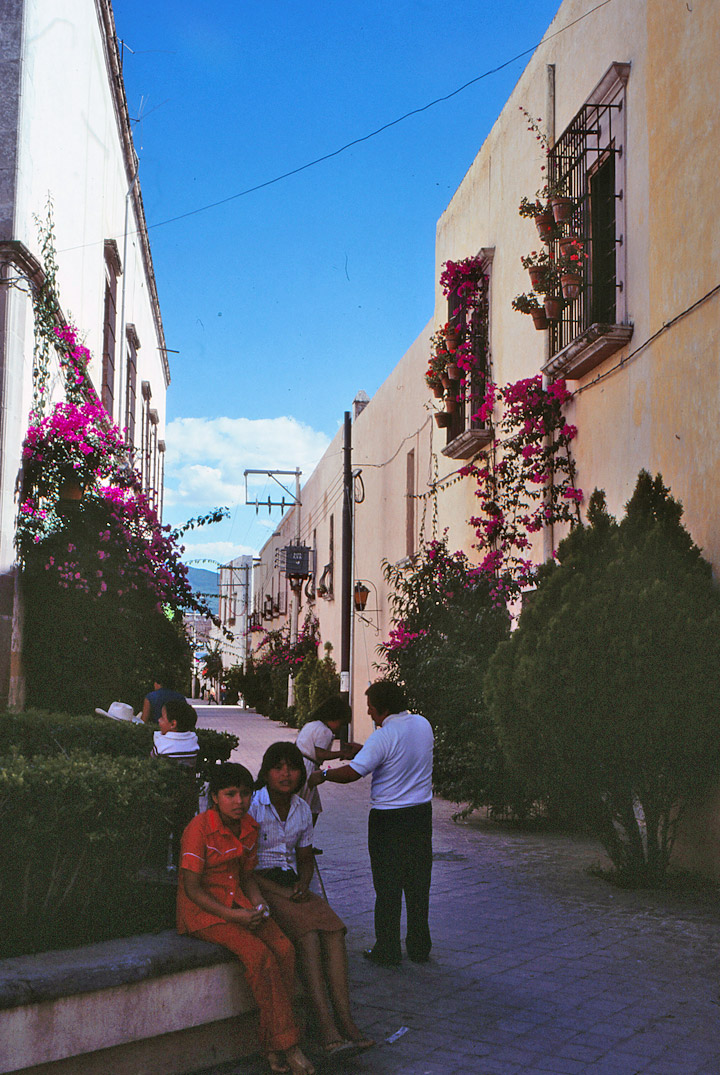 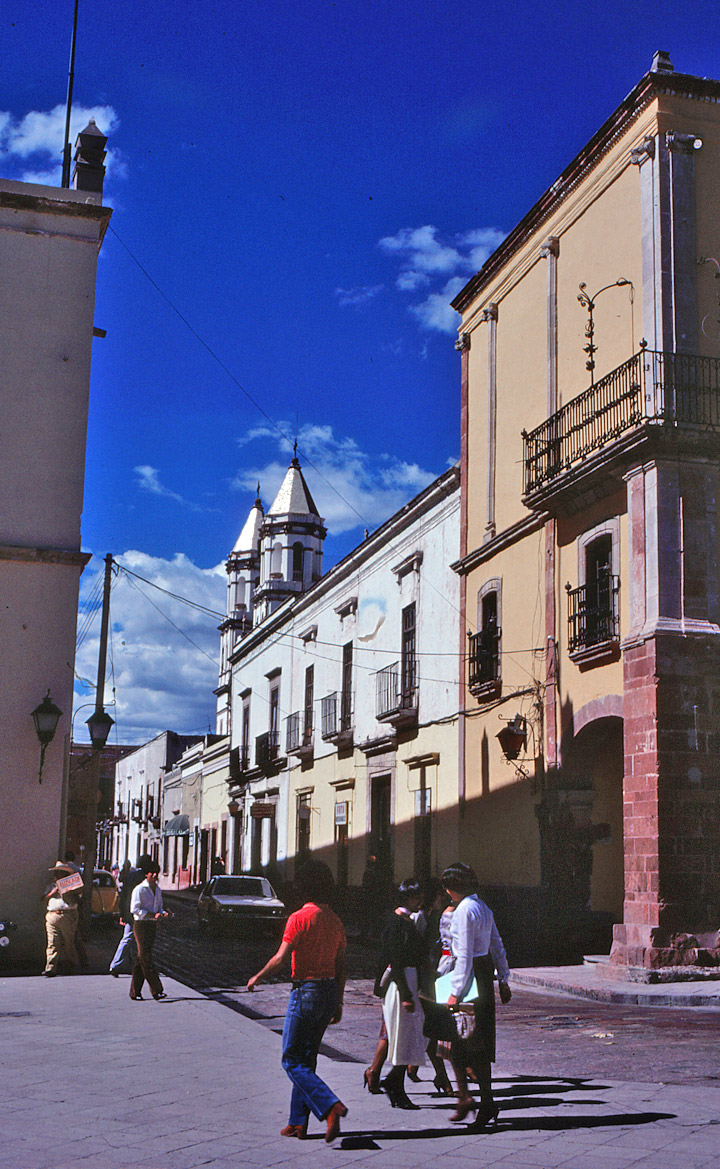 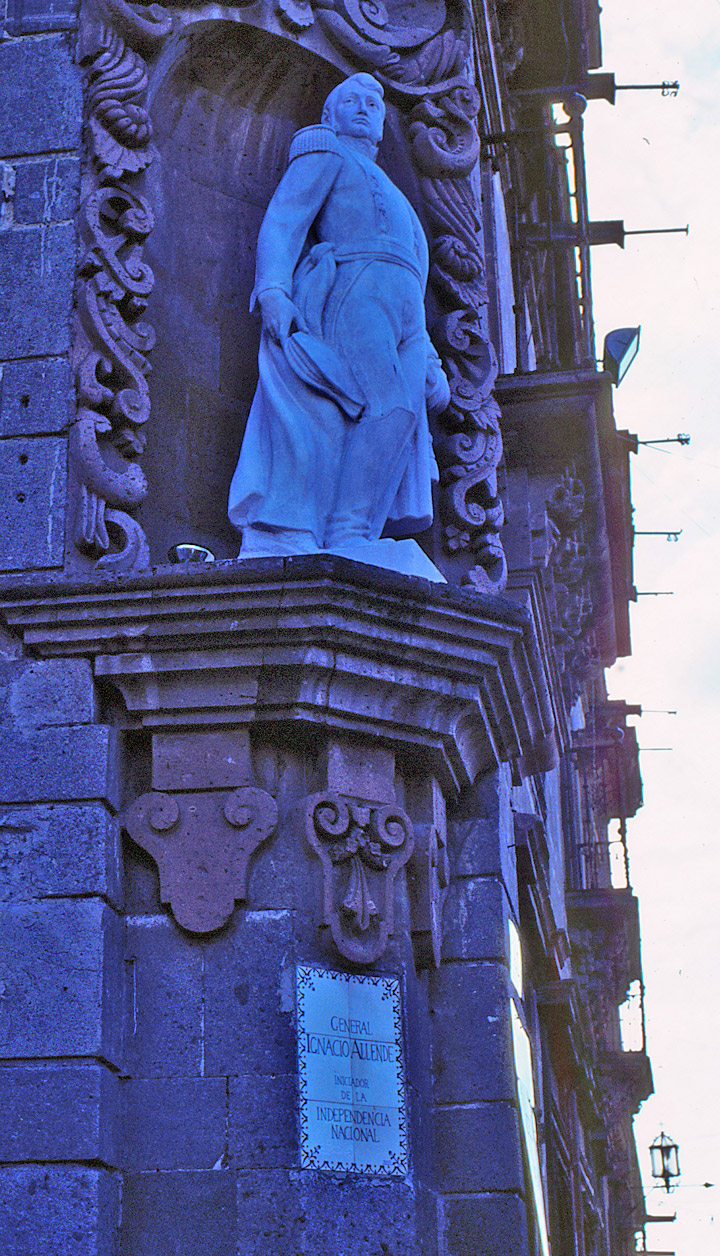 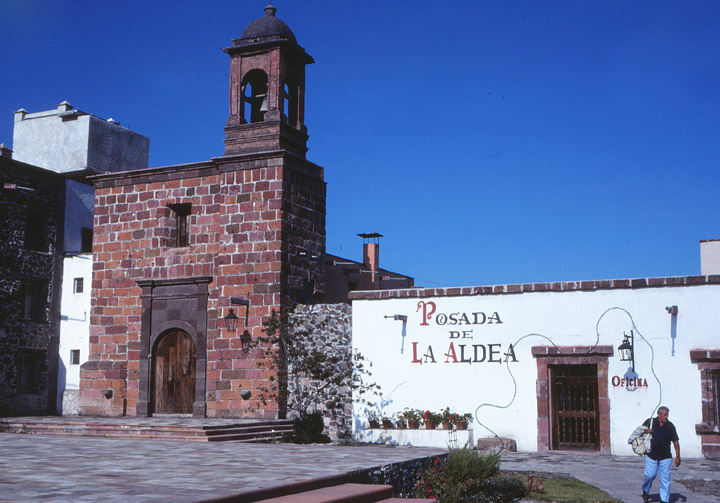 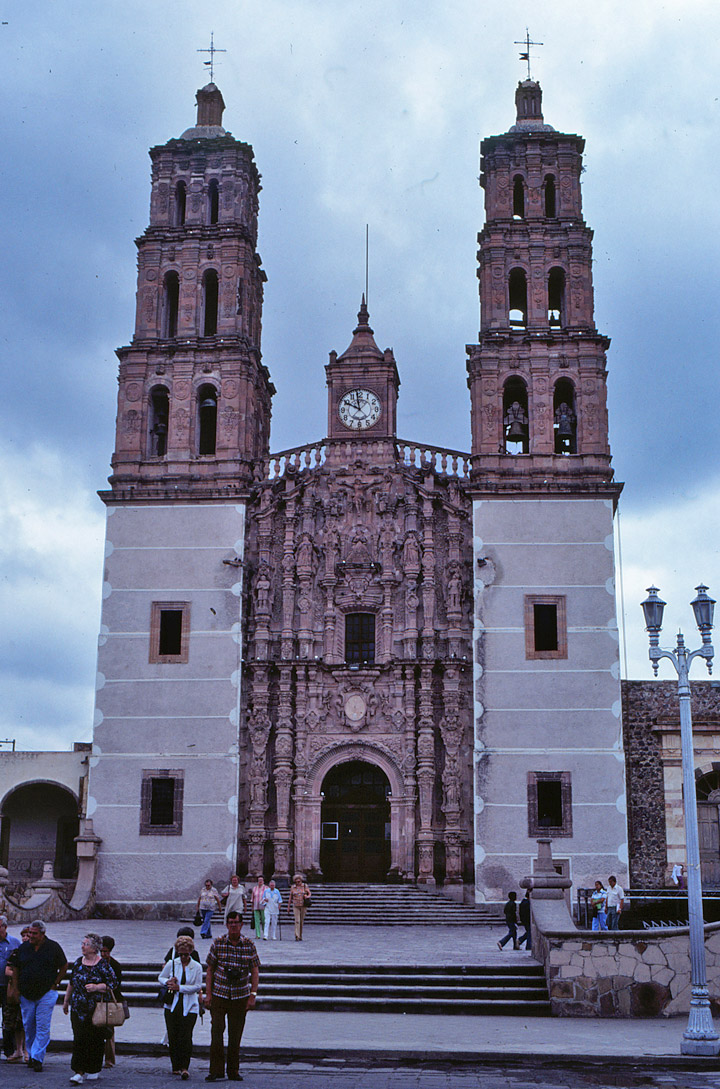 On the night of September 15, 1810, Miguel Hidalgo y Costillo, the 57-year-old parish priest of Dolores, and Ignacio Allende learned that their plans for insurrection against Spain had been discovered. They decided to act immediately and soon after dawn the next morning, September 16, Padre Hidalgo delivered his now famous Grito (Cry for Freedom) from the Parroquia of Dolores. This was the beginning of Mexico's struggle for freedom from Spanish rule which was to drag on until 1824 and take some 600,000 lives.

Dolores of that time was a poor, largely Indian village, but the ragged army of Hidalgo and Allende marched from here to San Miguel, then to Celaya and Salamanca until finally, having grown to a force of some 20,000 men, they had their first real confrontation with royalist troops in Guanajuato.

Hidalgo was captured after a final defeat in Guadalajara, then executed and beheaded on July 30, 1811. His head, along with those of Allende, Aldama and Jimenez, hung from one of the corners of the building in Guanajuato where that first battle had taken place. 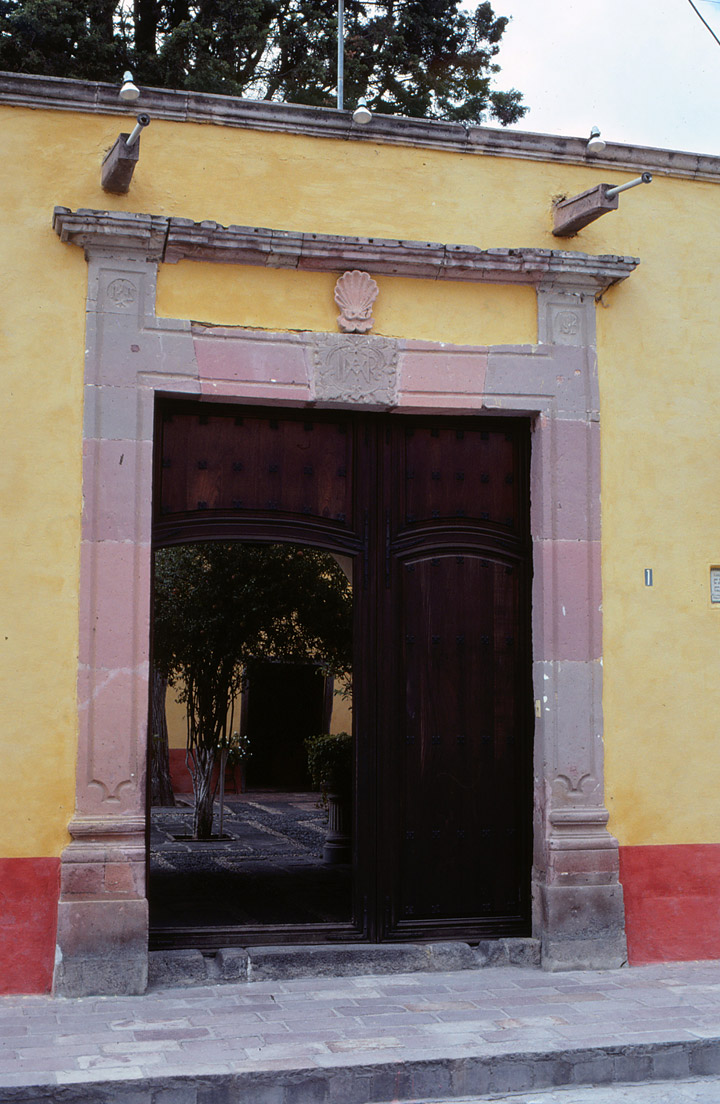 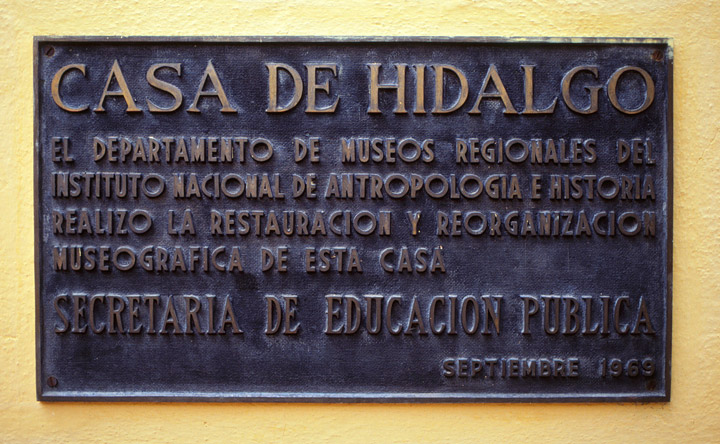 (1753-1811), Mexican priest and revolutionary, educated at Valladolid (now Morelia, Mexico). In 1778 he was ordained a priest and in 1803 was given charge of the parish of Dolores, in Guanajuato. He worked to improve the economic conditions of his parishioners, mostly Native Americans, by teaching them to cultivate vineyards and operate small industries such as brickmaking. In 1809 Hidalgo joined a secret society dedicated to freeing Mexico from the oppression of the Spanish colonial government. On September 16, 1810, Hidalgo, carrying a banner depicting Our Lady of Guadalupe, patron saint of Mexico, proclaimed a crusade and was joined by thousands of Mexicans. He captured the towns of Guanajuato and Guadalajara in October. Although he had the advantage, Hidalgo failed to march on Mexico City. On January 11, 1811, his army was completely routed near Guadalajara by a small force of Spanish soldiers. Hidalgo fled north, but he was captured and shot. After the establishment of the Mexican republic in 1824, the priest was regarded almost as a saint. The state of Hidalgo was named for him, and the town of Dolores became Dolores Hidalgo. September 16, the day on which he proclaimed his revolt, is celebrated as Independence Day. 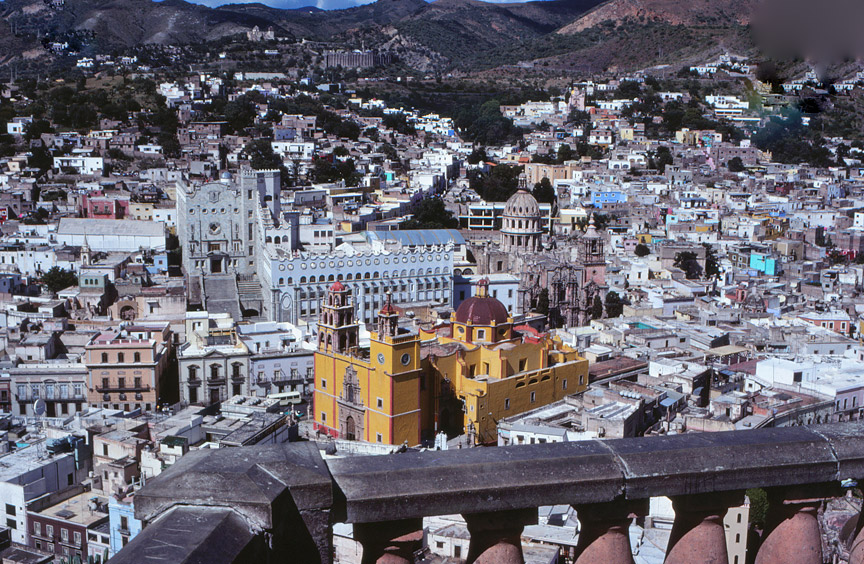 , city in central Mexico, capital of Guanajuato State, about 2010 m (about 6600 ft) above sea level. The city lies in a ravine surrounded by mountains rich with gold and silver mines that have been worked by Native Americans for more than 500 years. The city has several colonial buildings, the most important of which is the Alhóndiga de Granaditas, built as a public granary in 1798 and turned into a fortress by the Spanish. Guanajuato was founded in 1554 and was designated as a city in 1741. It was a center for the Mexican revolt for independence from Spain that began in 1810. Population (1995) 128,171. 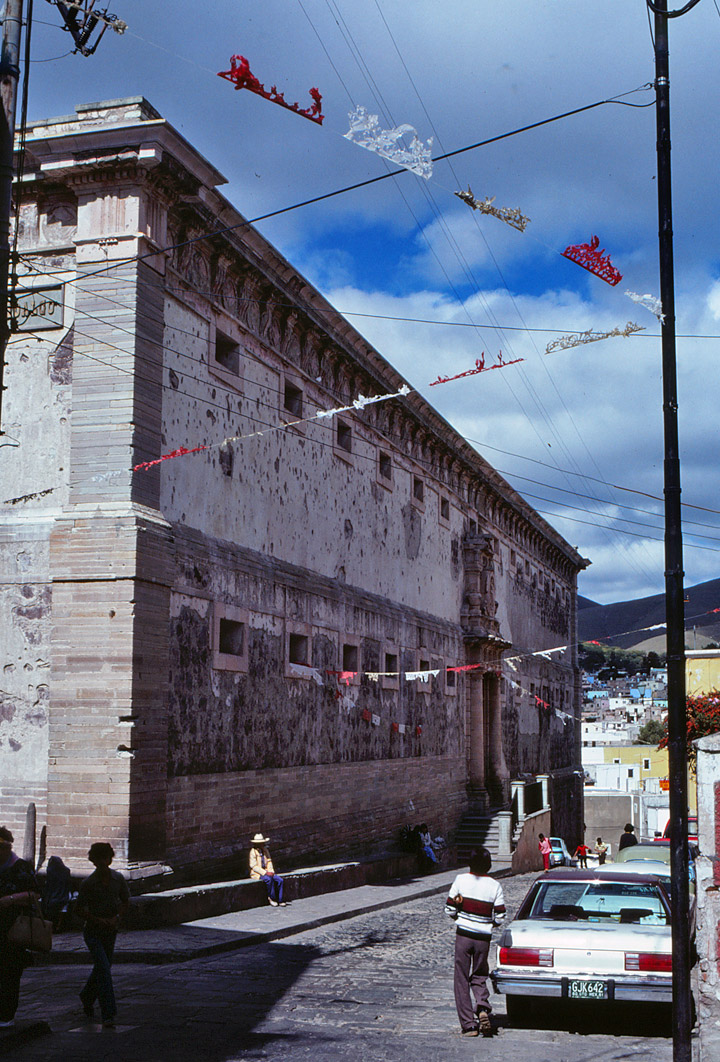 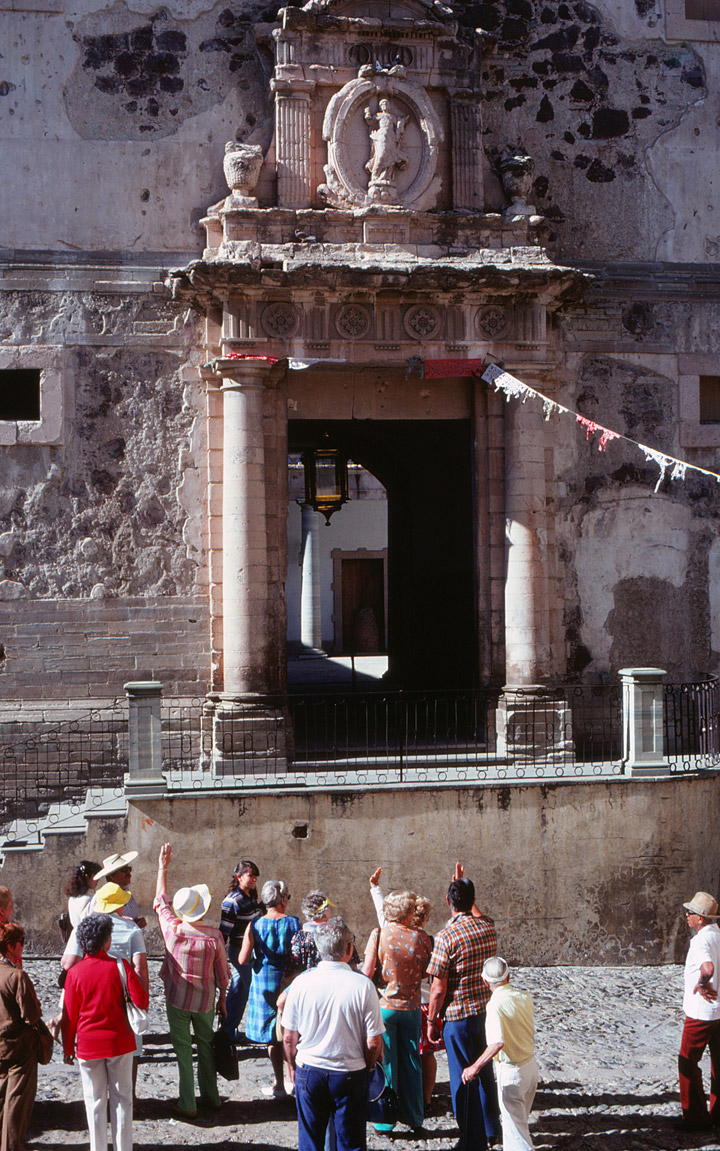 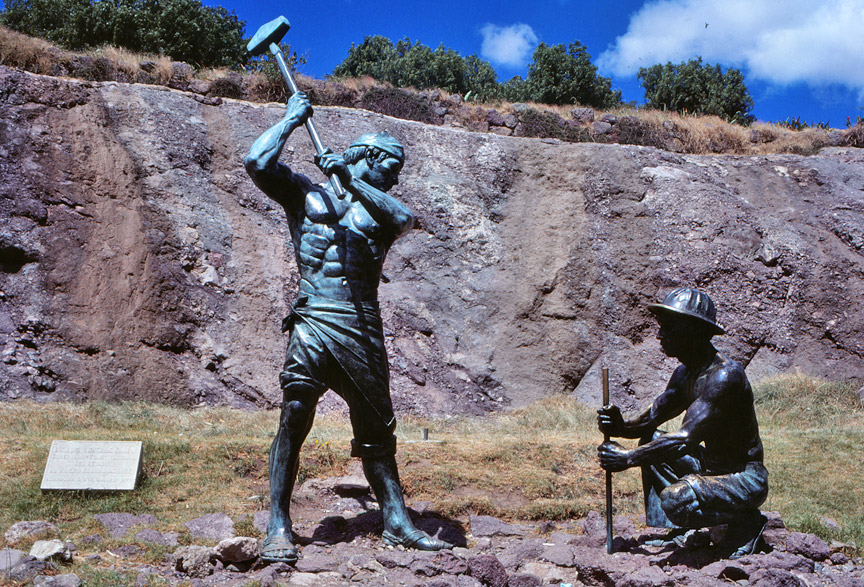 monument to the miners 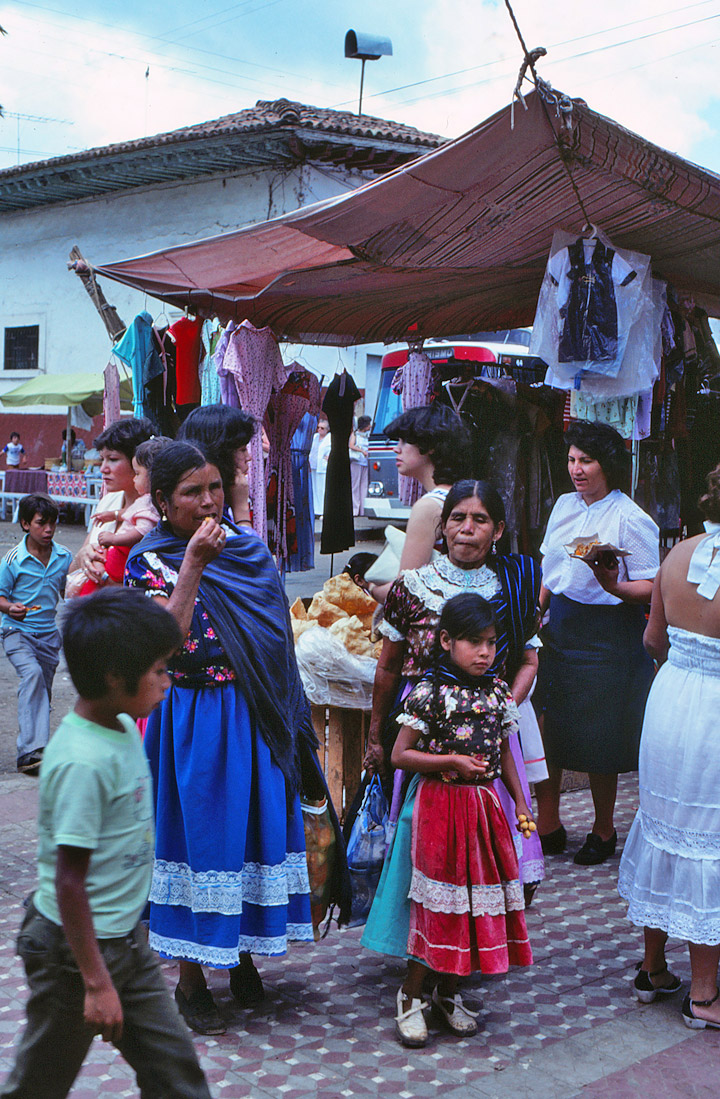 , city, western Mexico, capital of Michoacán State, at an altitude of 1887 m (6190 ft) above sea level. The city is the distribution and market center for the surrounding area, in which beans, corn, and fruit are grown and livestock is raised. Industries in Morelia include flour mills, food-processing plants, and factories producing chemicals. A university (1540) and an institute of technology are here. Founded in 1541 as Valladolid, the city was renamed in 1828 in honor of the patriot José María Morelos y Pavón. Population (1995) 578,061. 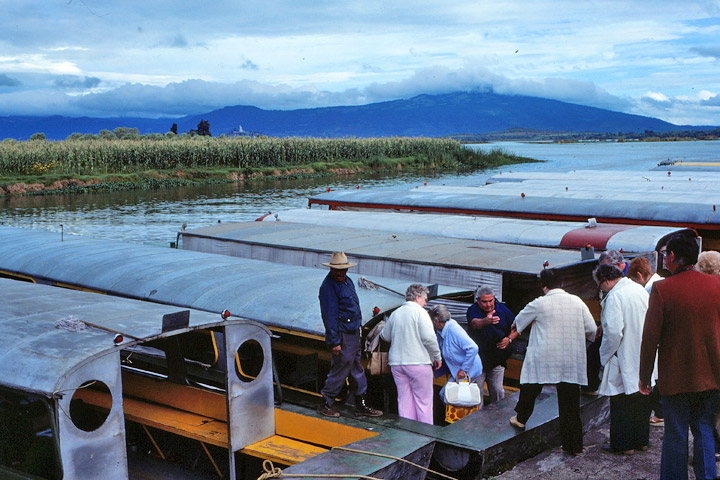 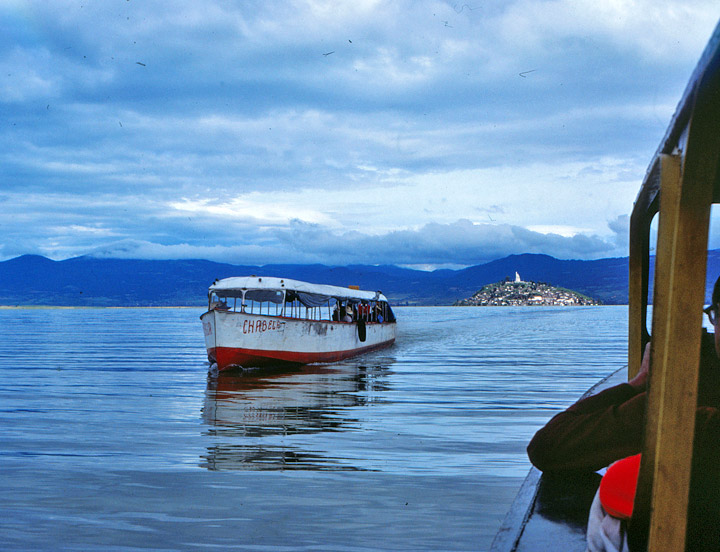 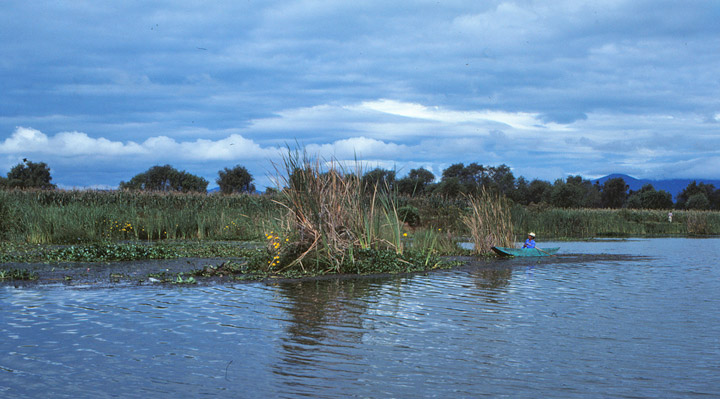 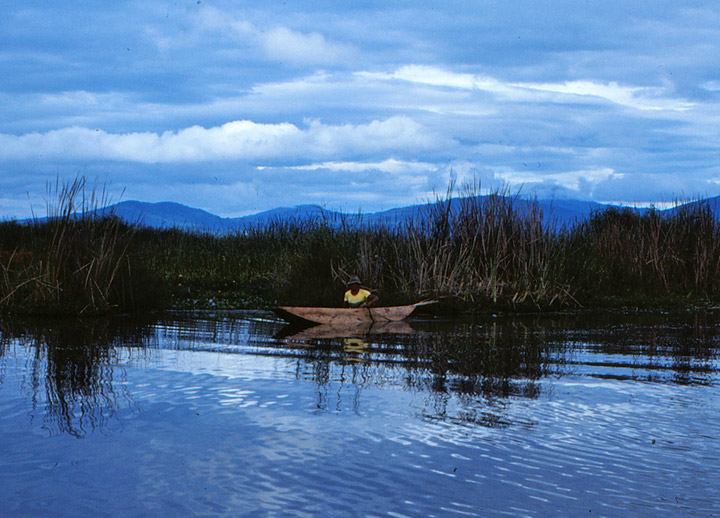 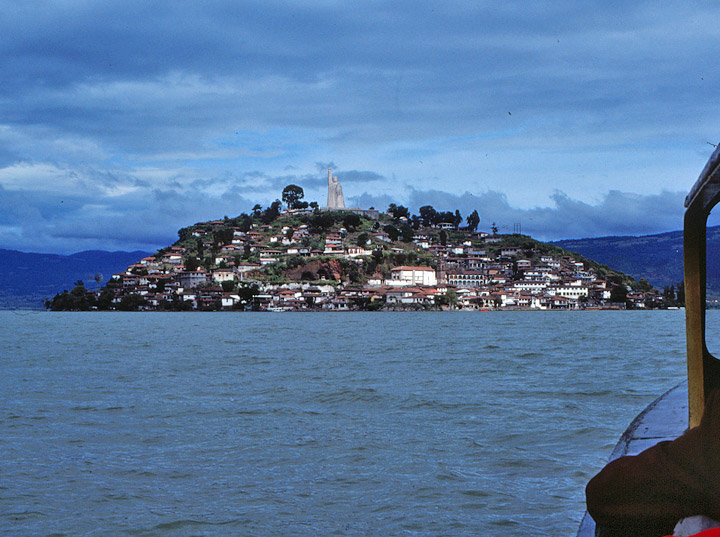 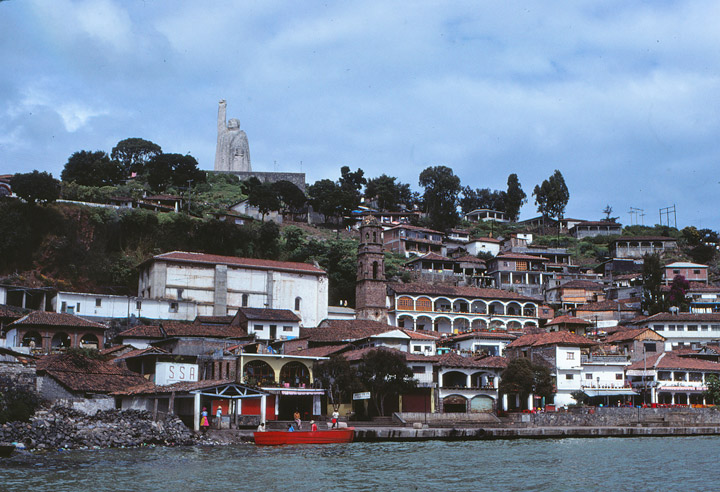 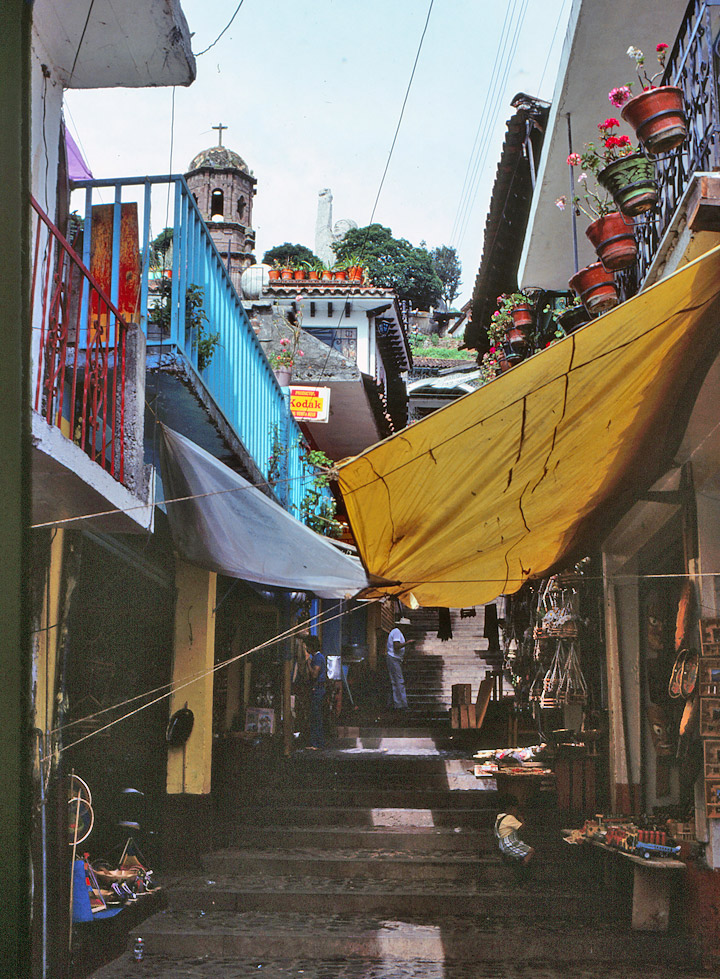 up toward the statue of Morales 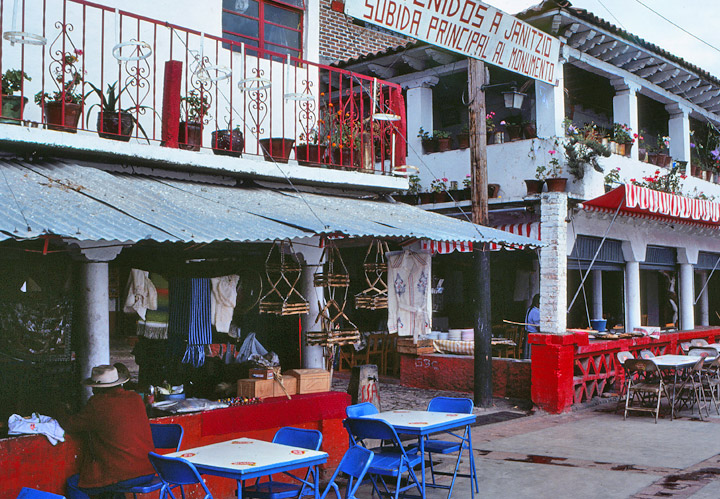 , tribe of Native Americans living in Mexico, in Michoacán State; the tribe's language constitutes an independent linguistic stock. Their ancient history is largely unknown, but evidence shows that they had developed an independent civilization by the time of the Spanish arrival in the 16th century. Their capital was Tzintzuntan, on Lake Pátzcuaro. 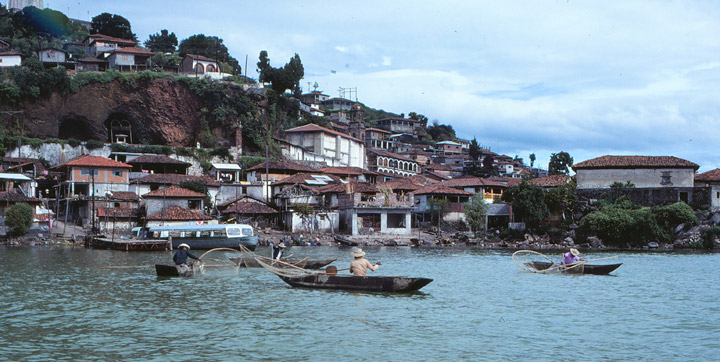 The Tarascan were known for the brilliant mosaics they fashioned from hummingbird feathers. They are noted today for weaving and lacquerwork, and their music has influenced Mexican folk song. Agriculture and fishing are the principal means of livelihood. The Tarascan live in the highlands west of Morelia and Lake Pátzcuaro and north of Uruapan.

Portions of this page's text is from Microsoft Encarta 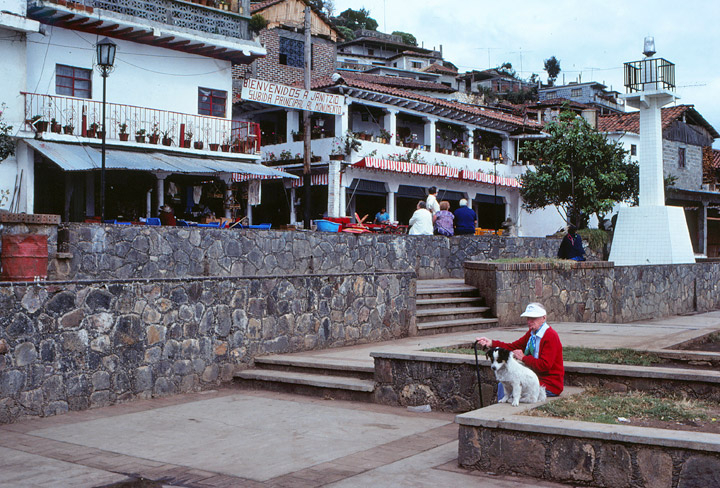 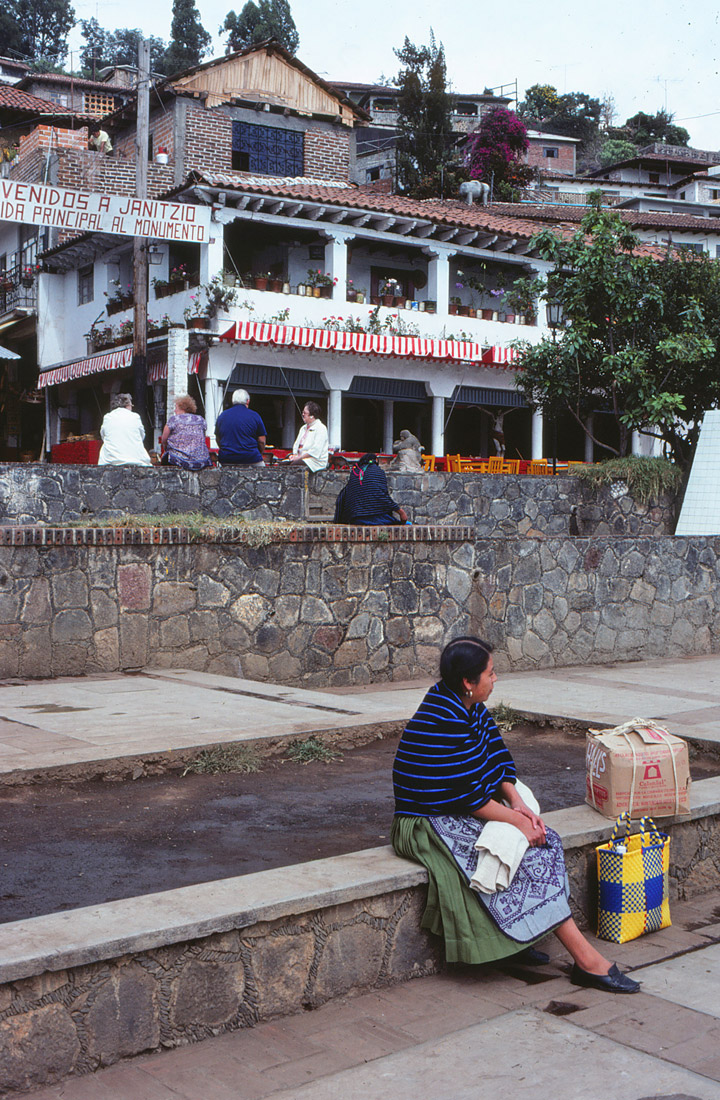 woman with a woven shawl of the style of Michoacán