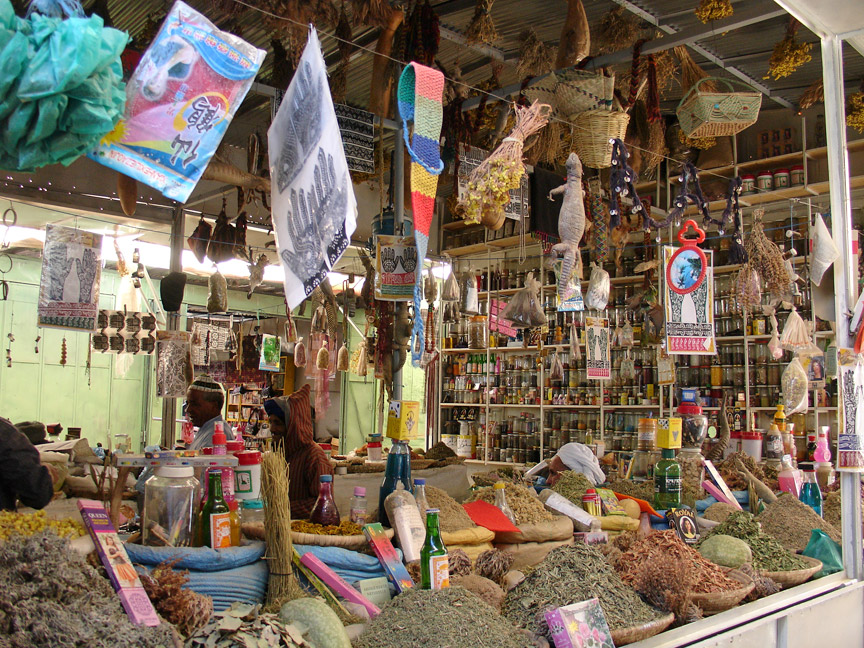 spice stand at the Rissani souk

A spice is a dried seed, fruit, root, bark or vegetative substance used in nutritionally insignificant quantities as a food additive for the purpose of flavoring, and indirectly for the purpose of killing and preventing growth of pathogenic bacteria. 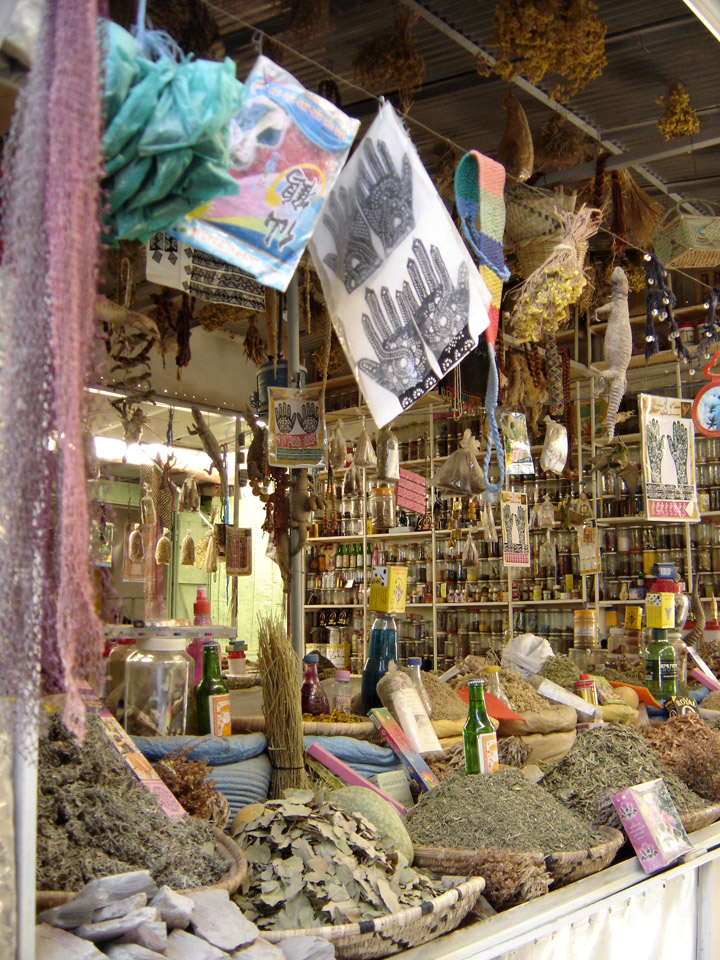 Many of the same substances have other uses in which they are referred to by different terms, e.g. in food preservation, medicine, religious rituals, cosmetics, perfumery or as vegetables. For example, turmeric is also used as a preservative; licorice as a medicine; garlic as a vegetable and nutmeg as a recreational drug. 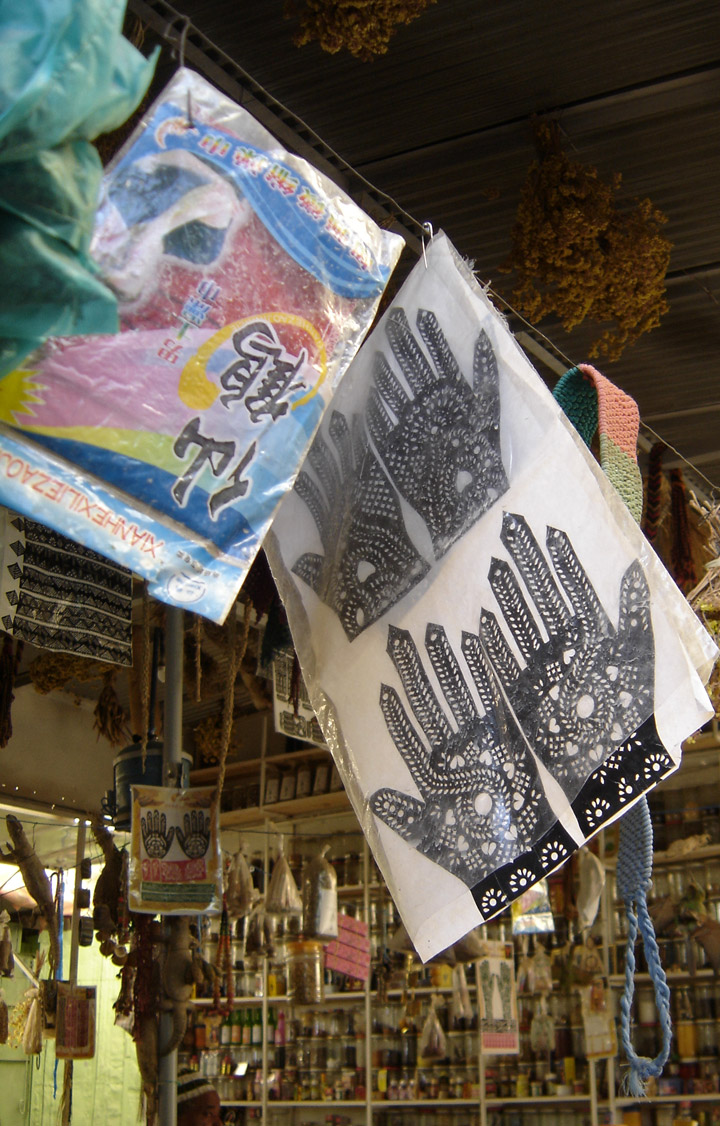 The Hand of Fatima

The Hamsa (Arabic: خمسة, Khamsa, literally "five", Hebrew: חמסה, Khamsa‎) is a symbol used in amulets, charms and jewelry to protect against the "evil eye."

Some associate the significance of the five fingers to the five books of the Torah for Jews, the Five Pillars of Islam for Sunnis, or the five People of the Cloak for Shi'ites. This symbolism may have evolved at a later stage, in view of the fact that archaeological evidence suggests the hamsa predates both religions.

In recent years some activists for Middle East peace have chosen to wear the hamsa as a symbol of the similarities of origins and tradition between the Islamic and Jewish faiths. The fingers can point up or down.

The hamsa is widespread in Arab countries, and is sold in many different forms in the marketplaces of Egypt, Morocco, Algeria and Tunisia. It is often painted on the fronts of homes. Nevertheless, many Muslims regard this as a superstition. They believe that only God (Allah) protects them, and the hamsa is tantamount to shirk, or idolatry. The symbol may have originated in Punic religion, where it was associated with Tanit. Hamsa plaques, often made of turquoise-colored ceramics, are very common in modern Egypt. 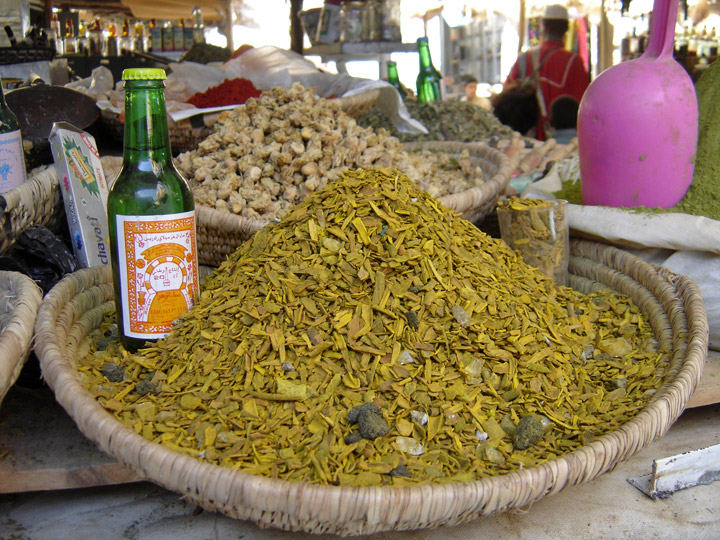 Spices are distinguished from herbs, which are leafy, green plant parts used for flavoring purposes. Herbs, such as basil or oregano, may be used fresh, and are commonly chopped into smaller pieces; spices, however, are dried and usually ground into a powder. 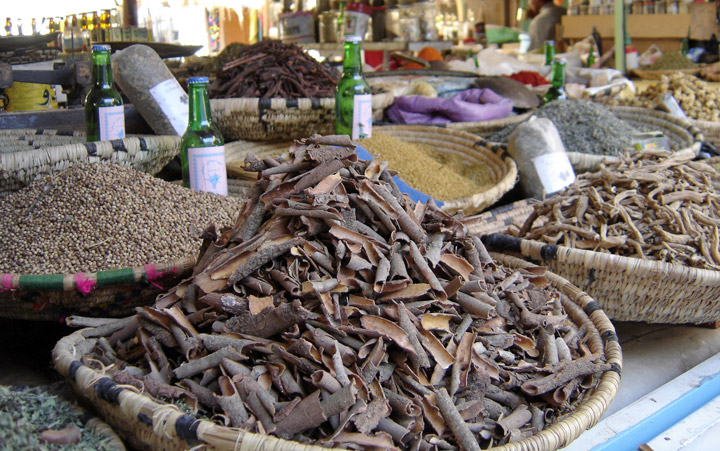 Salt is a very common seasoning, often mistakenly considered as a spice, but it is in fact a mineral product.

The basic classification of spices is as follows:
* Leaves and/or branches of aromatic plants, all or part of the plant can be used as one pleases. Basil, bay leaf, parsley, rosemary, tarragon, and thyme are all good examples.
* Ripened fruits or seeds of plants. Examples include dill, fennel, mustard, and pepper.
* Roots or bulbs of certain plants, garlic and ginger, for example. 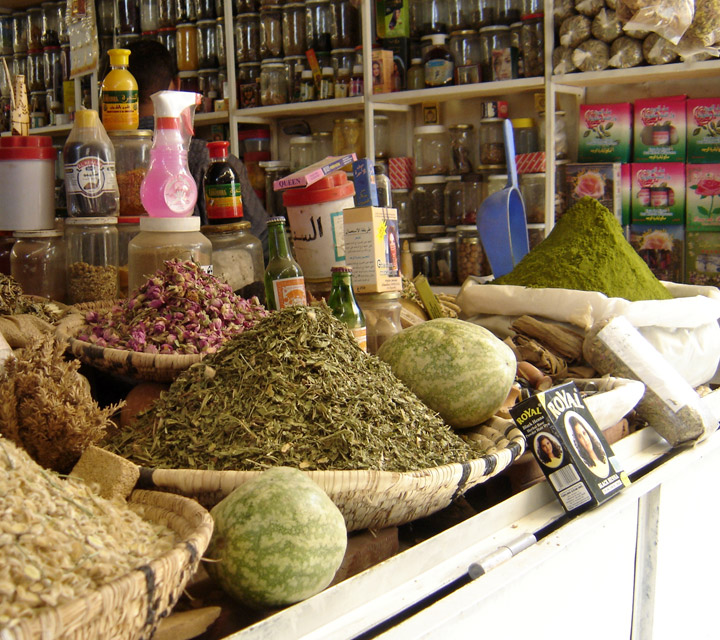 Spices have been prominent in human history virtually since their inception. Spices were among the most valuable items of trade in the ancient and medieval world. The culinary use of spices originated in the Indian Sub continent and South-East Asia. In the story of Genesis, Joseph was sold into slavery by his brothers to spice merchants. In the biblical poem Song of Solomon, the male speaker compares his beloved to many forms of spices. Generally, Egyptian, Chinese, Indian and Mesopotamian sources do not refer to known spices. 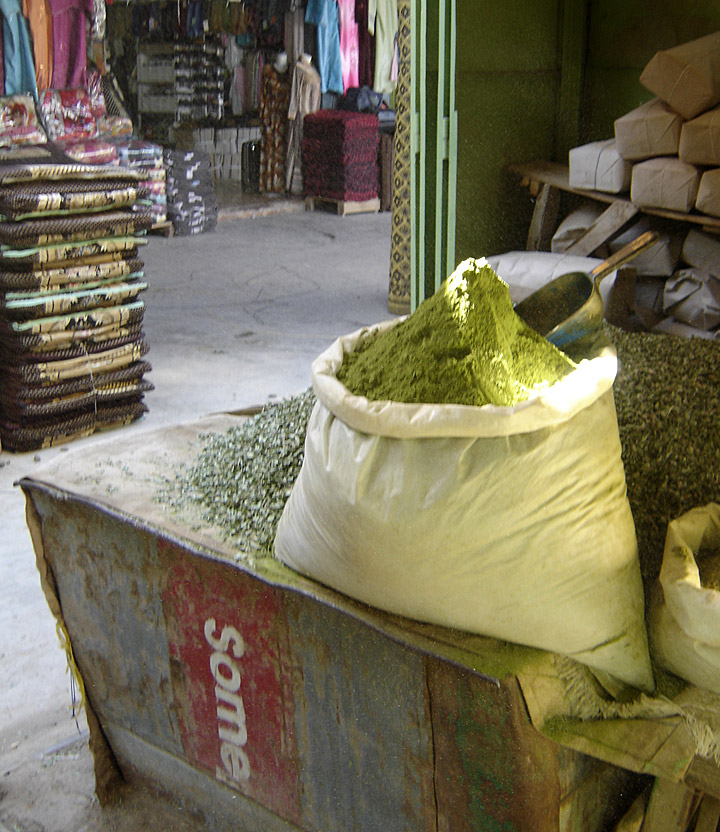 The spice trade developed throughout the Middle East in around 2000 BC with cinnamon, Indonesian cinnamon and pepper. 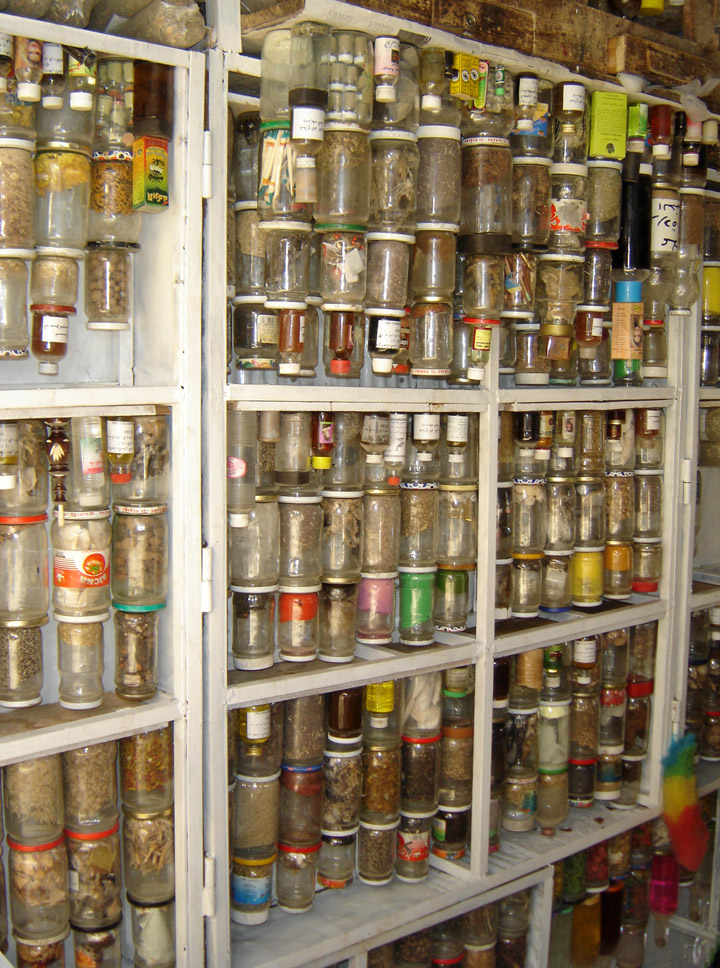 A recent archaeological discovery suggests that the clove, indigenous to the Indonesian island of Ternate in the Maluku Islands, could have been introduced to the Middle East very early on. Digs found a clove burnt onto the floor of a burned down kitchen in the Mesopotamian site of Terqa, in what is now modern-day Syria, dated to 1700 BC. The ancient Indian epic of Ramayana mentions cloves. In any case, it is known that the Romans had cloves in the 1st century AD because Pliny the Elder spoke of them in his writings. 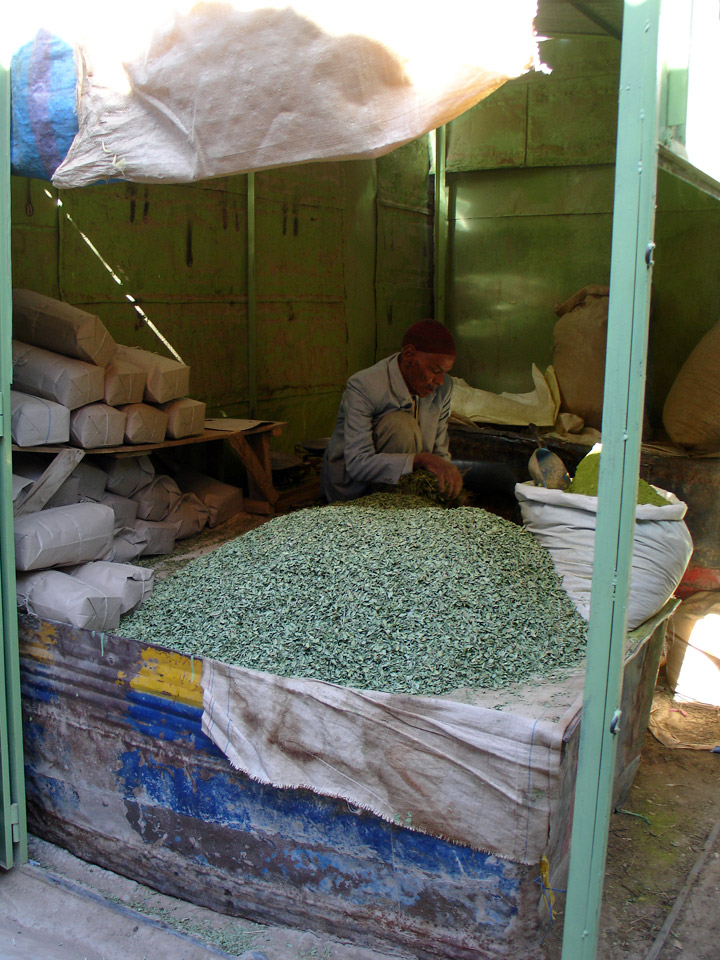 In South Asia, nutmeg, which originates from the Banda Islands in the Moluccas, has a Sanskrit name. Sanskrit is the language of the sacred Hindu texts, this shows how old the usage of this spice is in this region. Historians estimate that nutmeg was introduced to Europe in the 6th century BC. 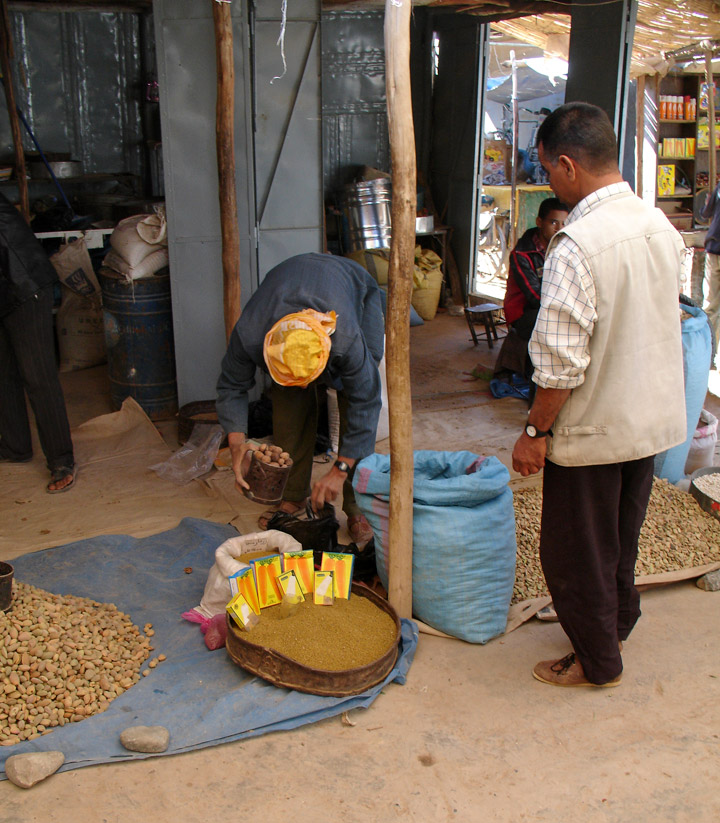 Indonesian merchants went around China, India, the Middle East and the east coast of Africa. Arab merchants controlled the routes through the Middle East and India until Roman times with the discovery of new sea routes. This made the city of Alexandria in Egypt the main trading centre for spices because of its port. 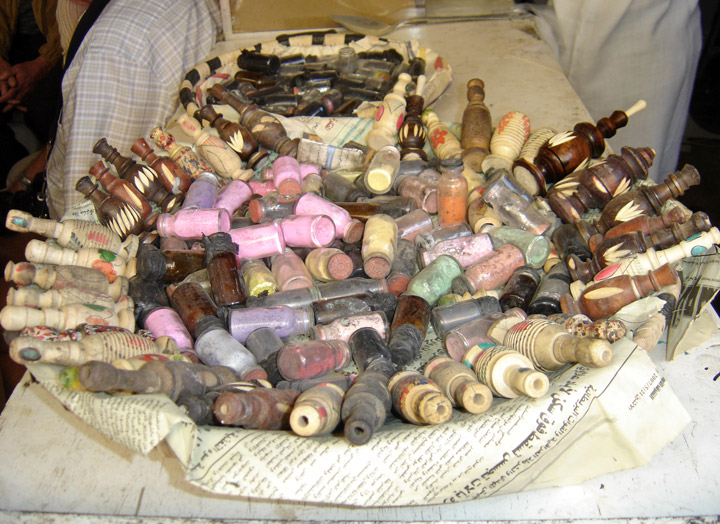 Spices were among the most luxurious products available in the Middle Ages, the most common being black pepper, cinnamon (and the cheaper alternative cassia), cumin, nutmeg, ginger and cloves. They were all imported from plantations in Asia and Africa, which made them extremely expensive. From the 8th until the 15th century, the Republic of Venice had the monopoly on spice trade with the Middle East, and along it with the neighboring Italian city-states. The trade made the region phenomenally rich. It has been estimated that around 1,000 tons of pepper and 1,000 tons of the other common spices were imported into Western Europe each year during the Late Middle Ages. The value of these goods was the equivalent of a yearly supply of grain for 1.5 million people. While pepper was the most common spice, the most exclusive was saffron, used as much for its vivid yellow-red color as for its flavor. Spices that have now fallen into some obscurity include grains of paradise, a relative of cardamom which almost entirely replaced pepper in late medieval north French cooking, long pepper, mace, spikenard, galangal and cubeb. A popular modern-day misconception is that medieval cooks used liberal amounts of spices, particularly black pepper, merely to disguise the taste of spoiled meat. However, a medieval feast was as much a culinary event as it was a display of the host's vast resources and generosity, and as most nobles had a wide selection of fresh or preserved meats, fish or seafood to choose from, the use of ruinously expensive spices on cheap, rotting meat would have made little sense. 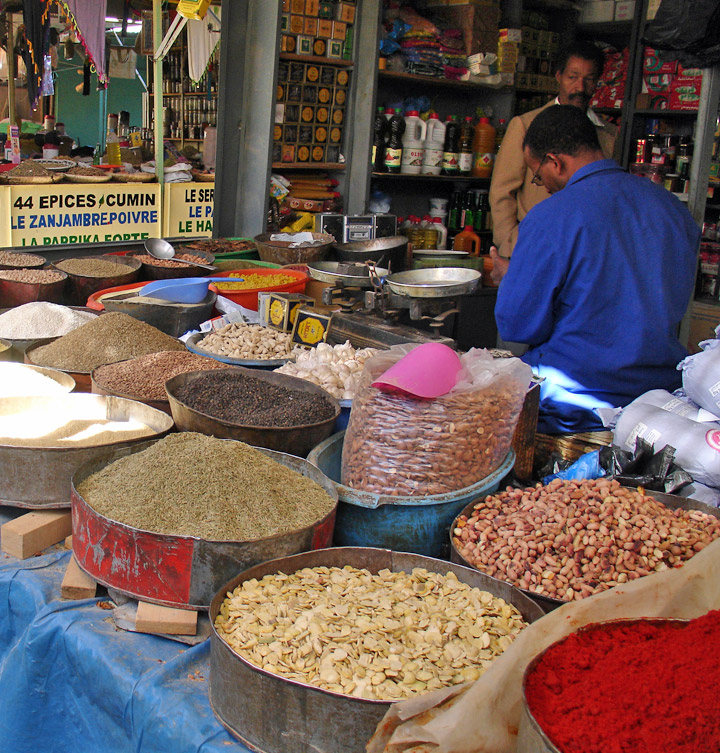 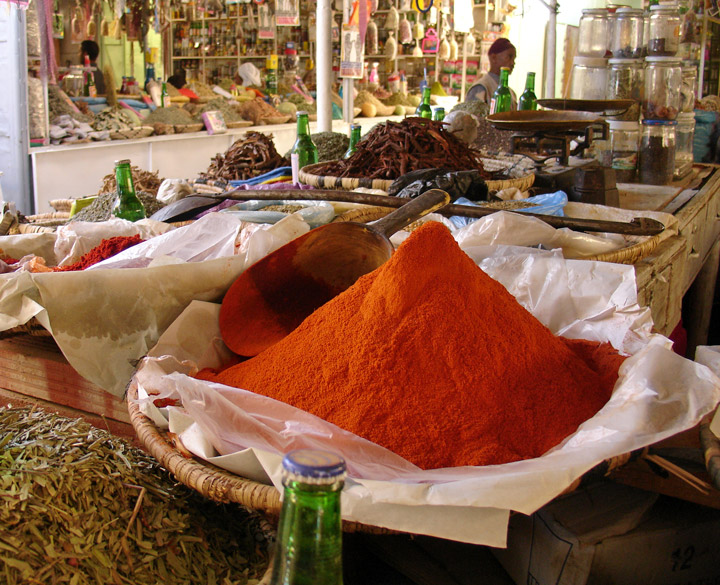 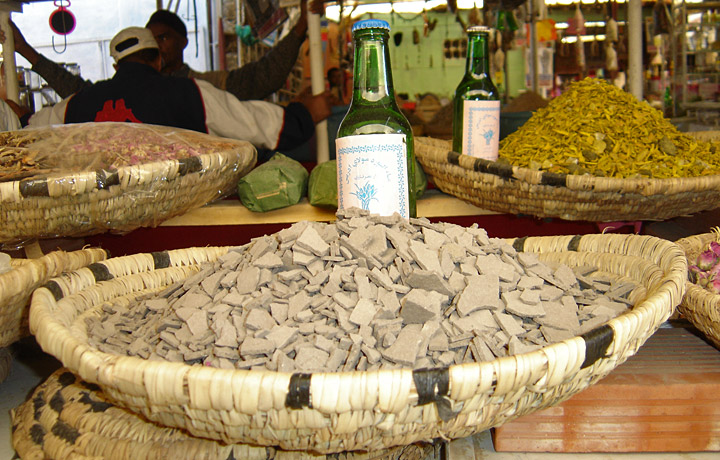 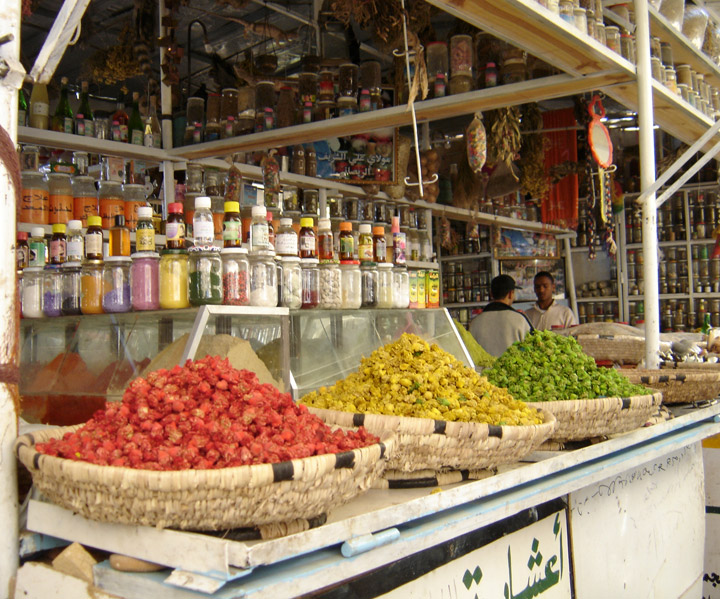 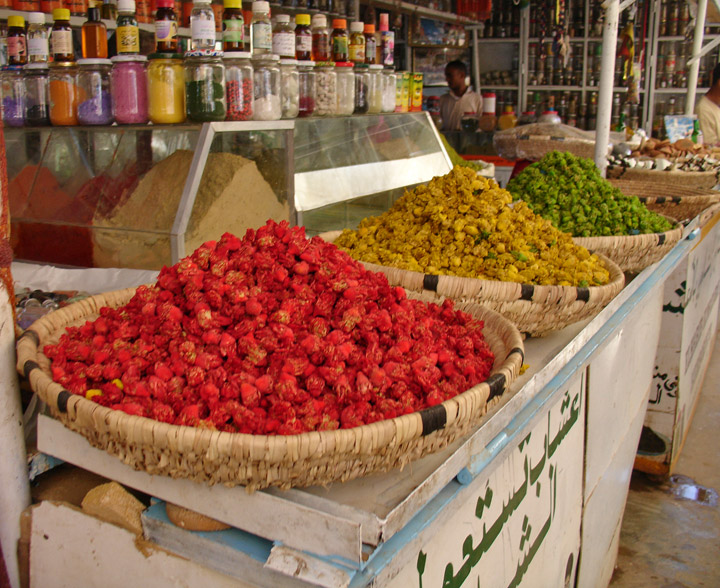 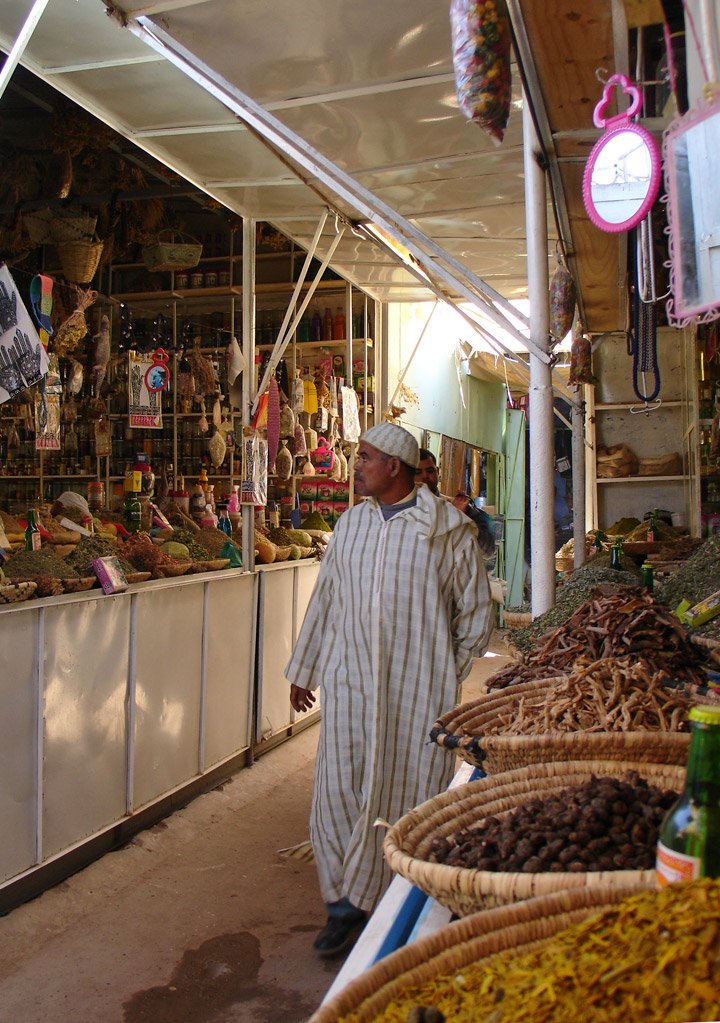 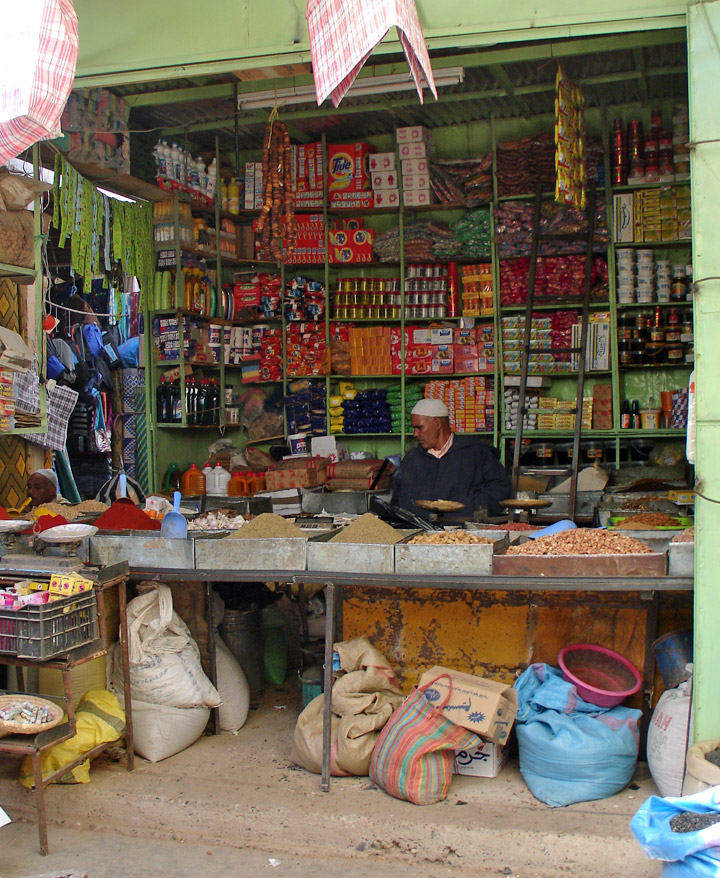 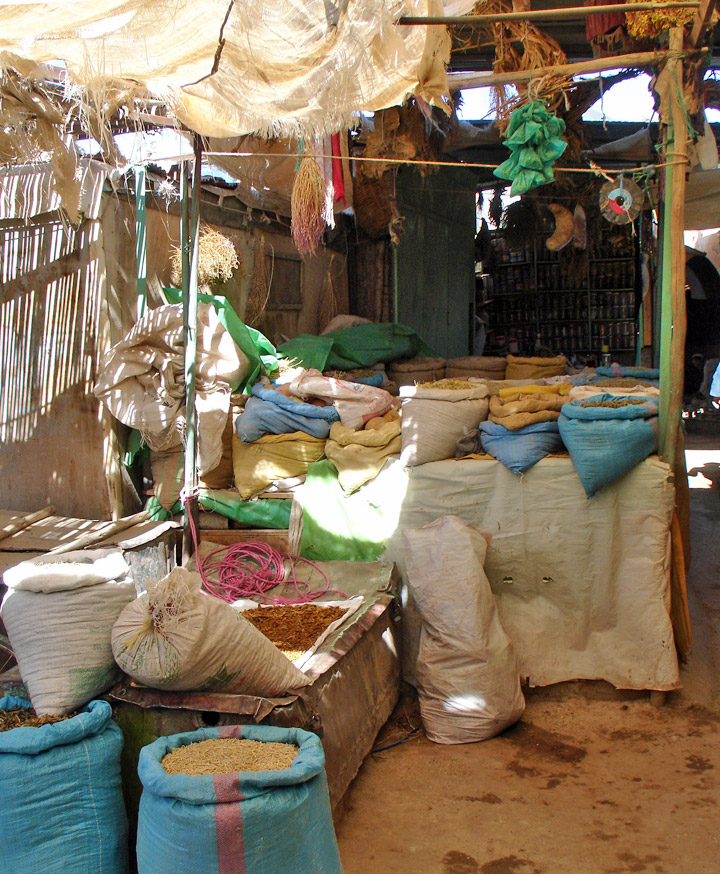 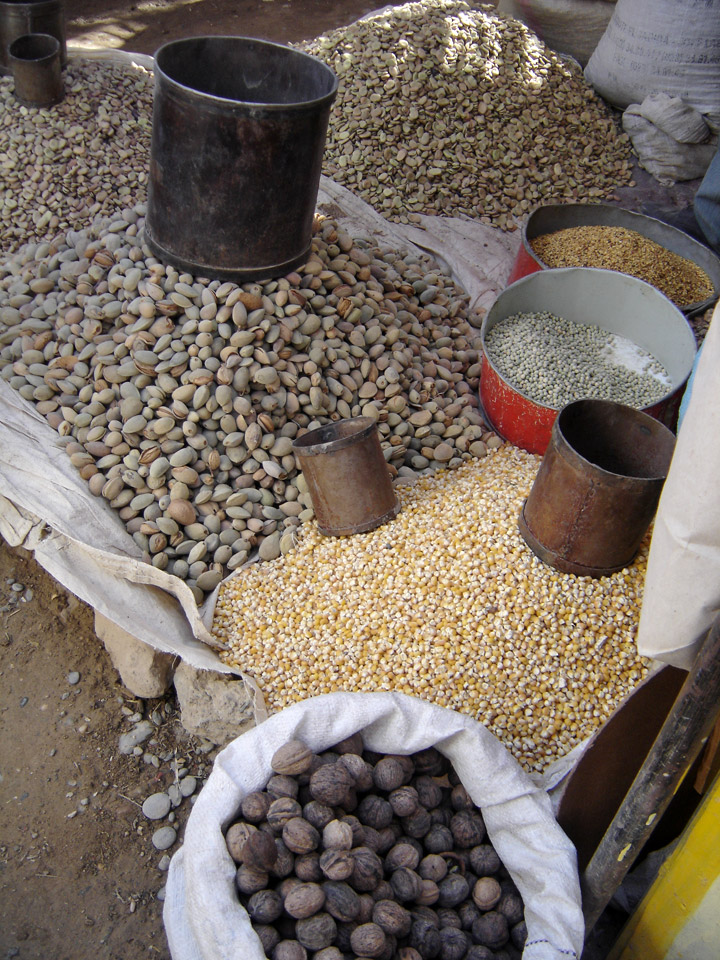 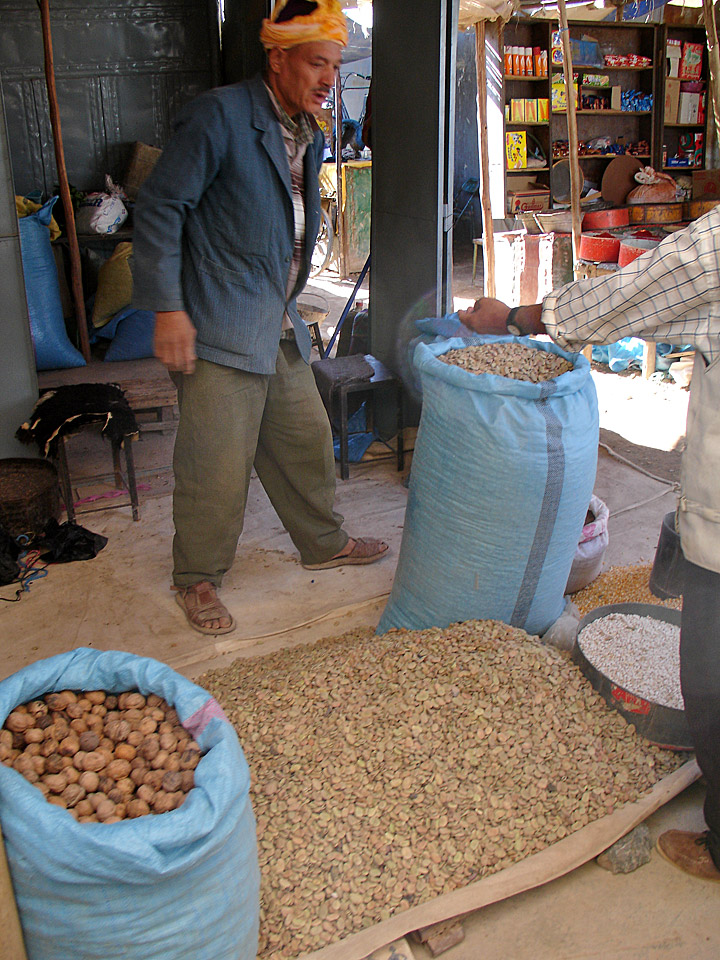 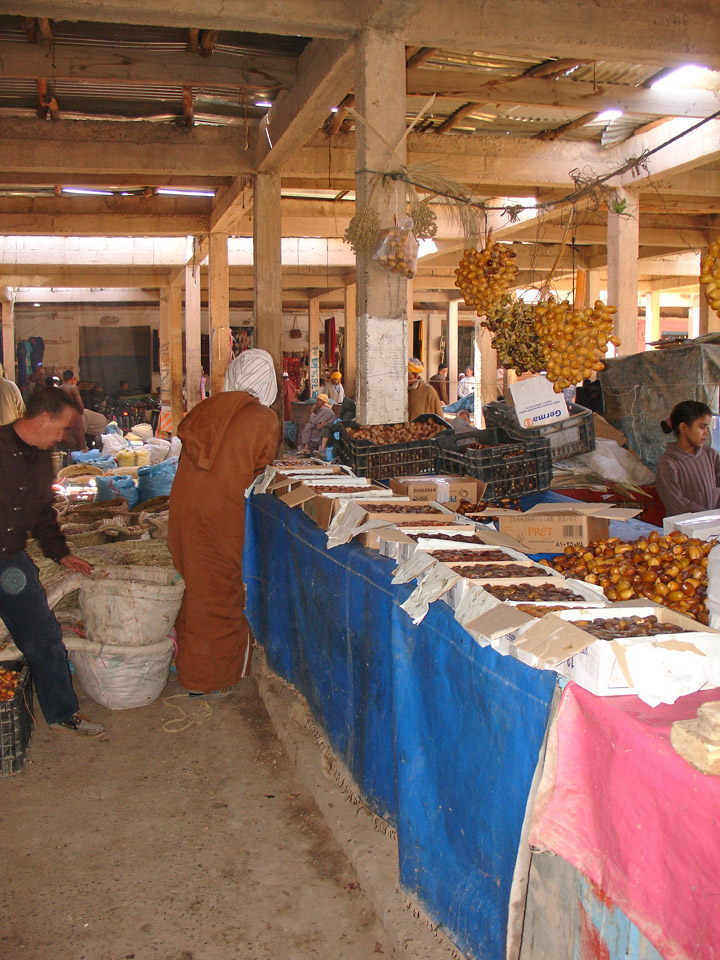 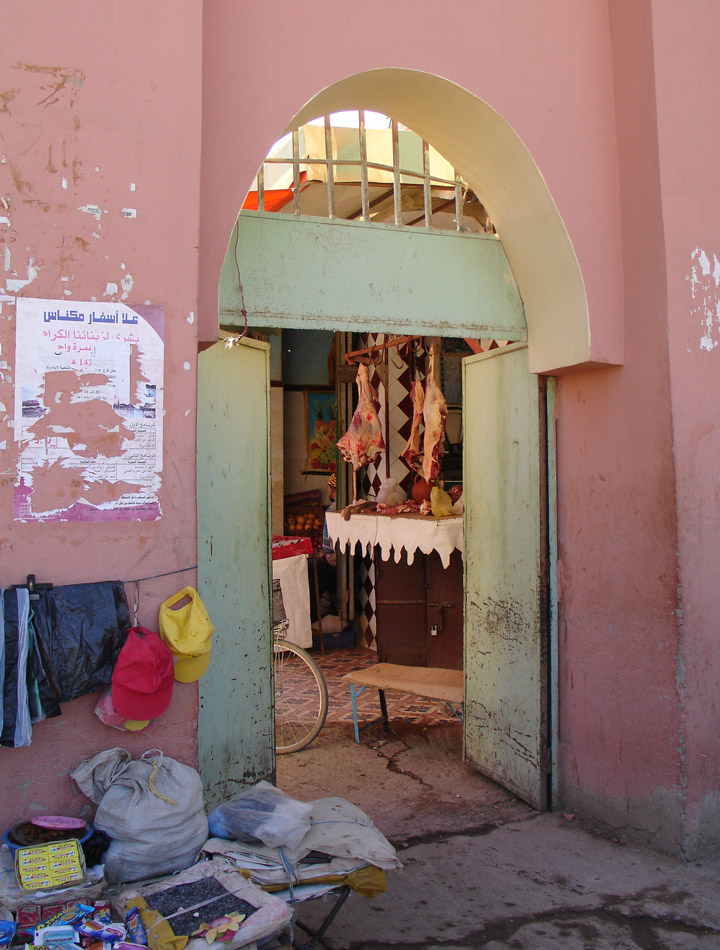 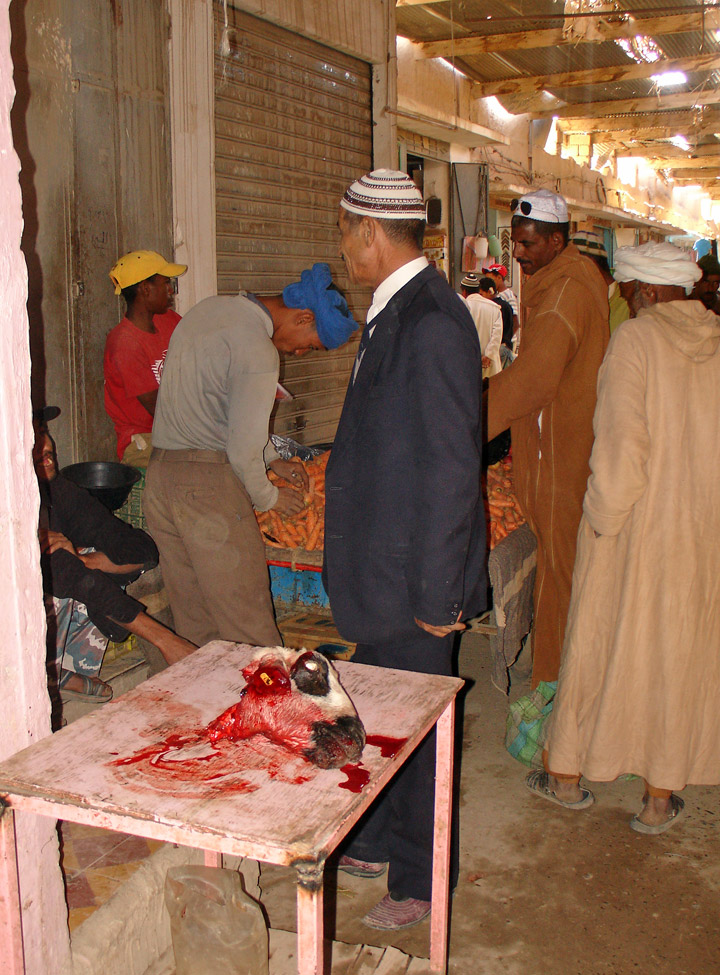 only the head remaining 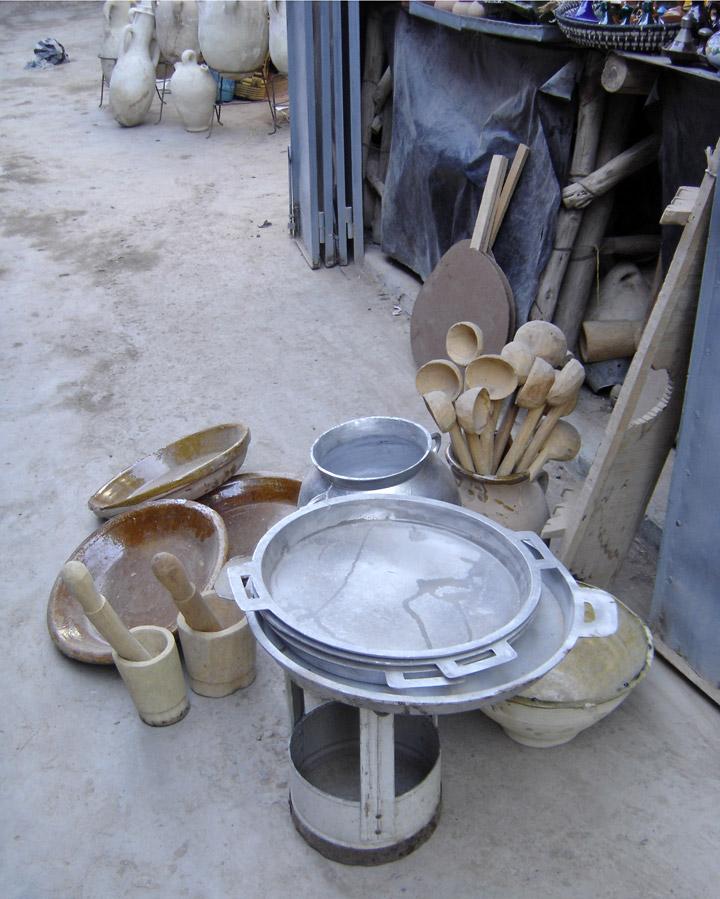 Mortar and Pestle for grinding the spices 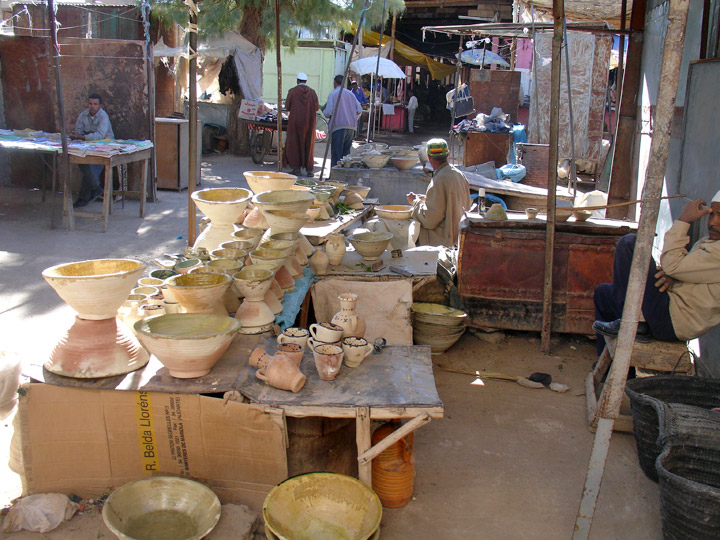 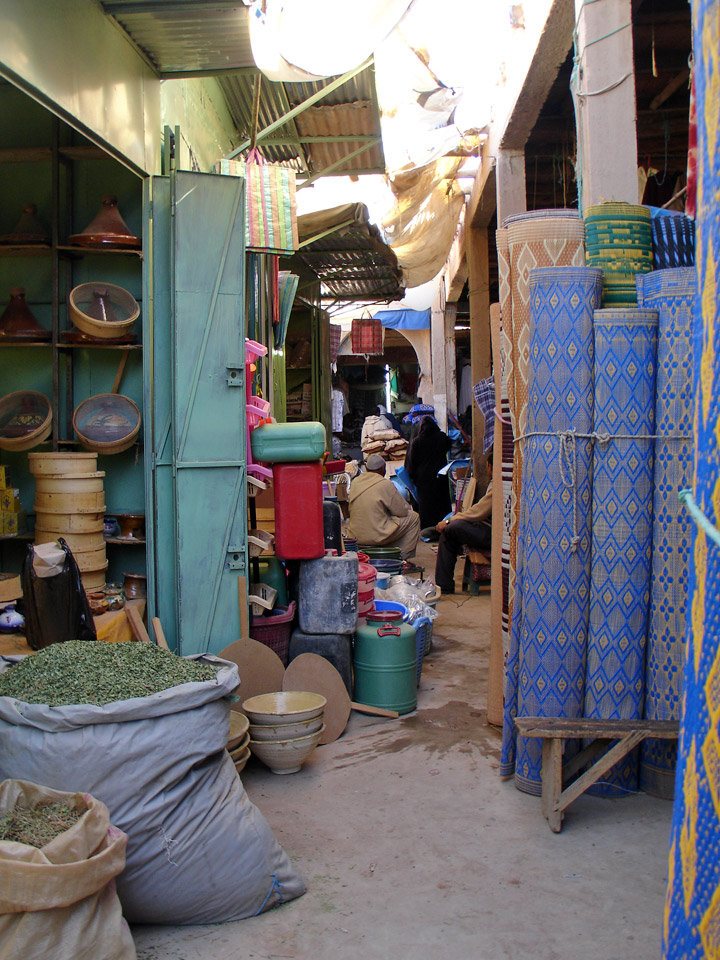 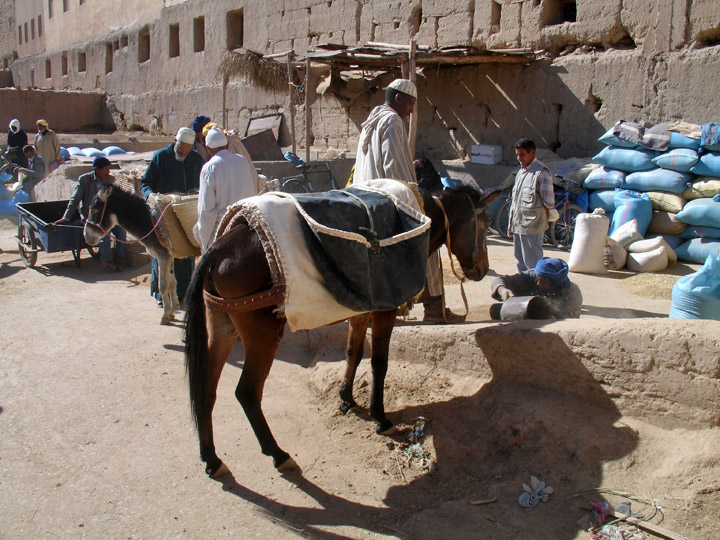 all brought into the souk by mules 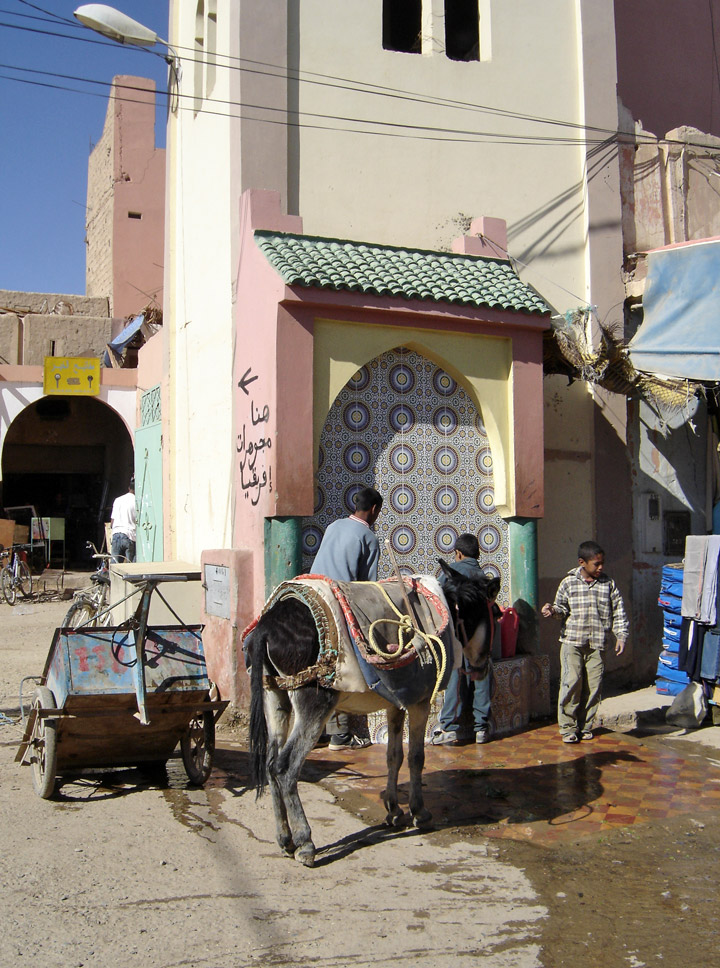 but they also get to drink