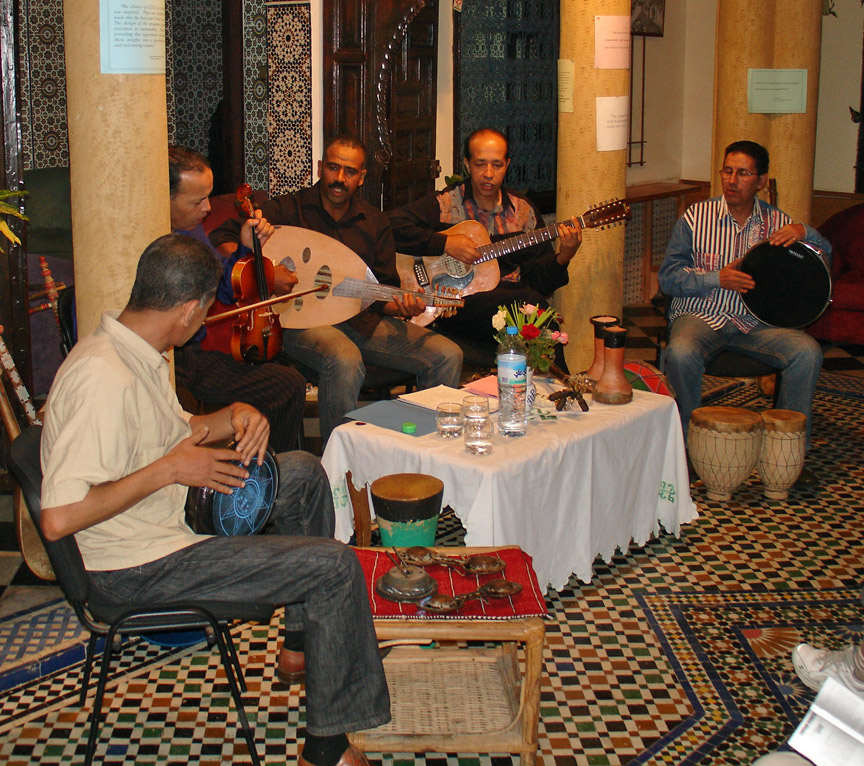 Morocco is inhabited mostly by Arabs along with Berbers and other minorities. Its music is predominantly Arab, but Andalusian and other imported influences have had a major effect on the country's musical character. Rock-influenced chaabi bands are widespread, as is trance music with historical origins in Muslim music. 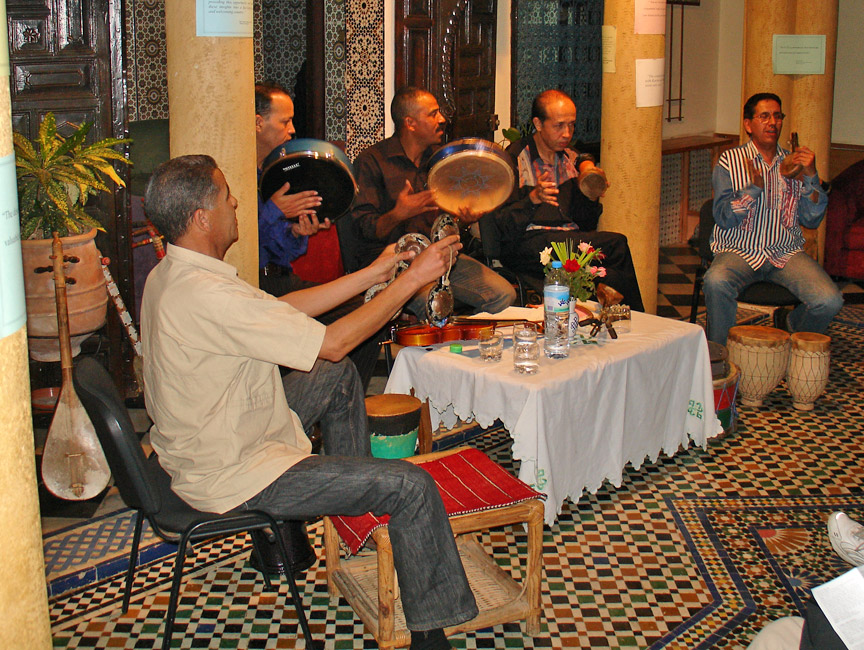 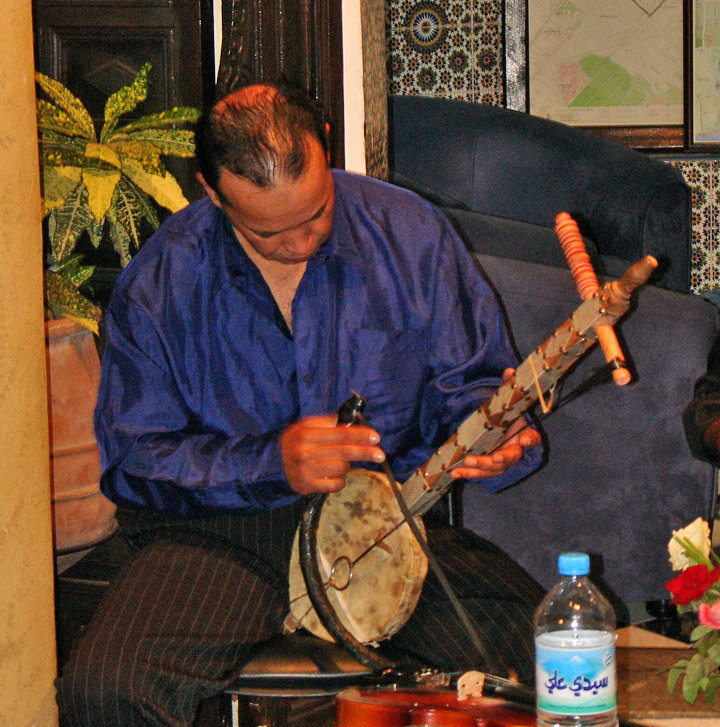 There used to be twenty-four nuba linked to each hour of the day, but only four nuba have survived in their entirety, and seven in fragmentary form. An entire nuba can last six or seven hours and are divided into five parts called mizan, each with a corresponding rhythm. 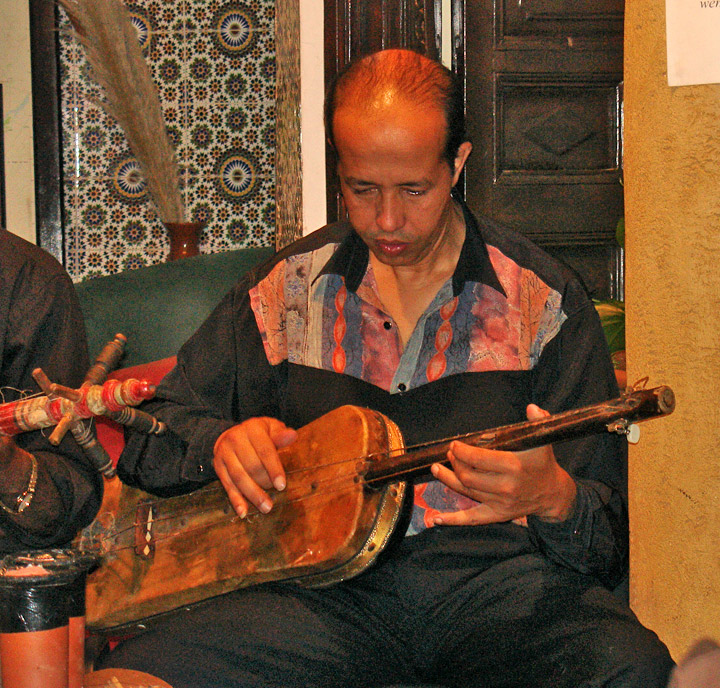 Each mizan begins with instrumental preludes called either tuashia, m'shaliya or bughya, followed by as many as twenty songs (sana'a) in the entire mizan. 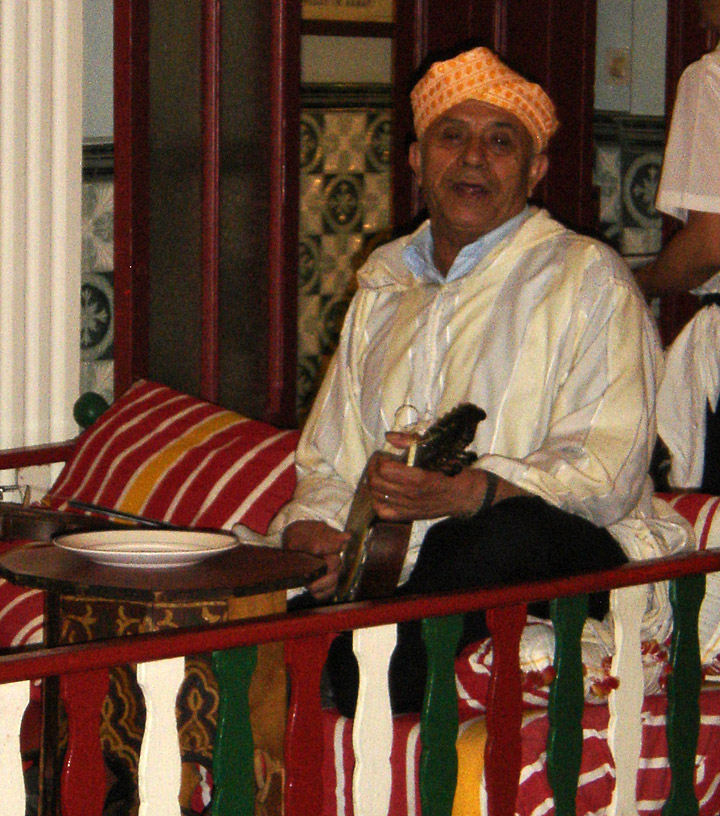 Andalusian classical schools are spread across Morocco, having left Spain when the Moors and Jews were driven out of the country. Valencia's school is now in Fez, while Granada's is located in Tetouan and Chefchaouen. Cities like Tangier and Meknes have their own orchestras as well. 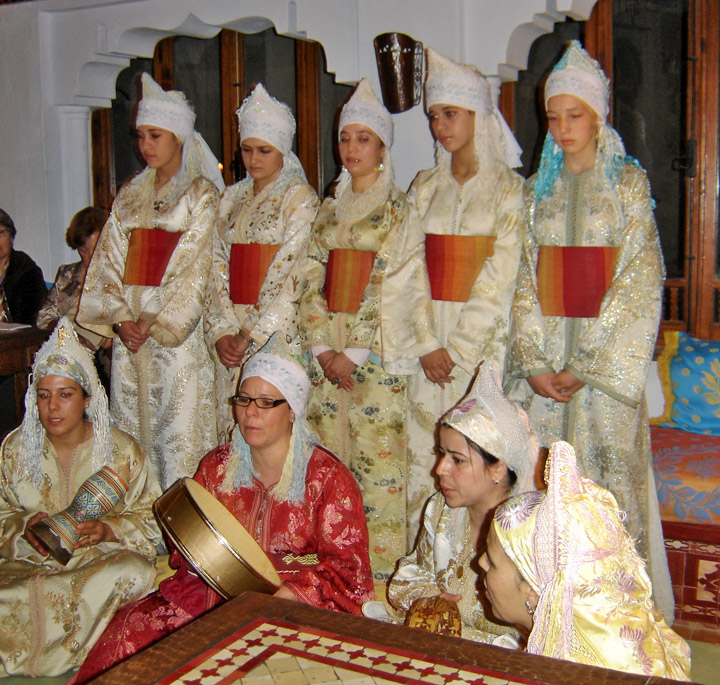 Jews in Morocco played an important role in the perpetuation of this oral tradition. In fact, the late Rabbi David Bouzaglo was known to have a conservatory of sorts in Casablanca where a number of Arab and Jewish musicians trained in al-Ala. 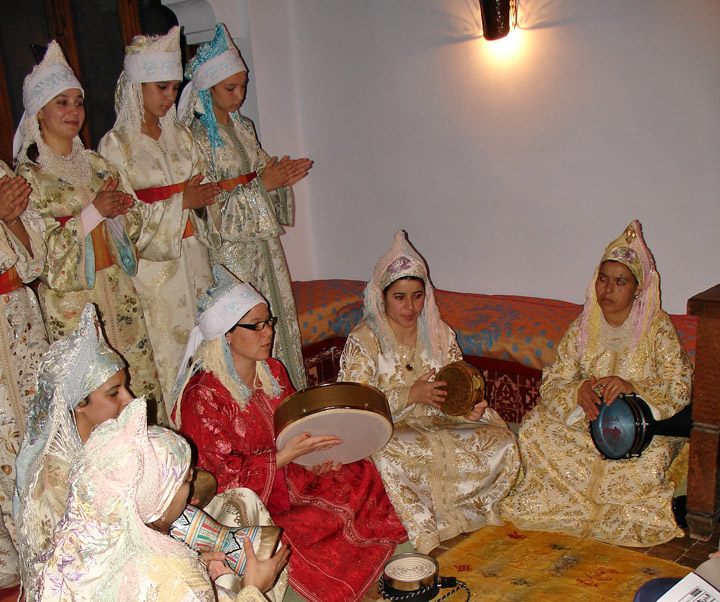 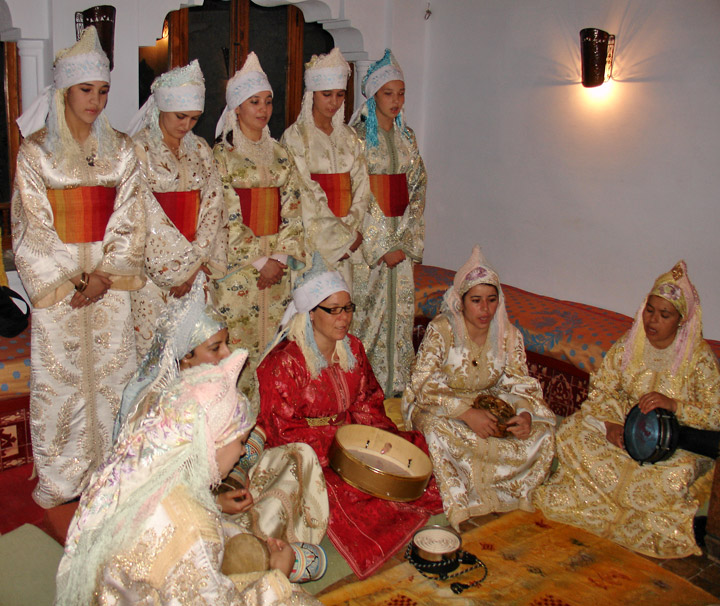 Gharnati is primarily Algerian, but is also popular in Rabat and Oujda in Morocco. It is arranged in nuba like al-âla; there are four unfinished nuba and twelve complete ones. Orchestras consist of kvîtra, mandolin, banjo, oud and kamenjah. The word "Gharnati" comes from the Andalusian city of Granada. 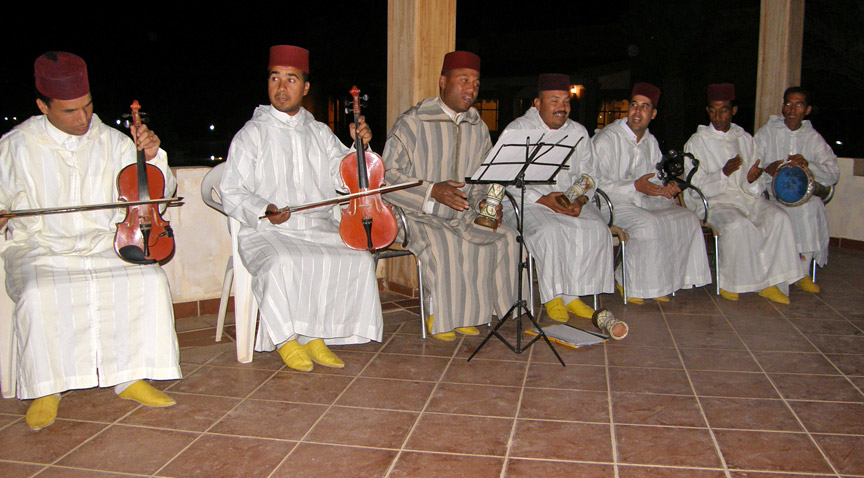 There are three varieties of Berber folk music: village and ritual music, and the music performed by professional musicians. 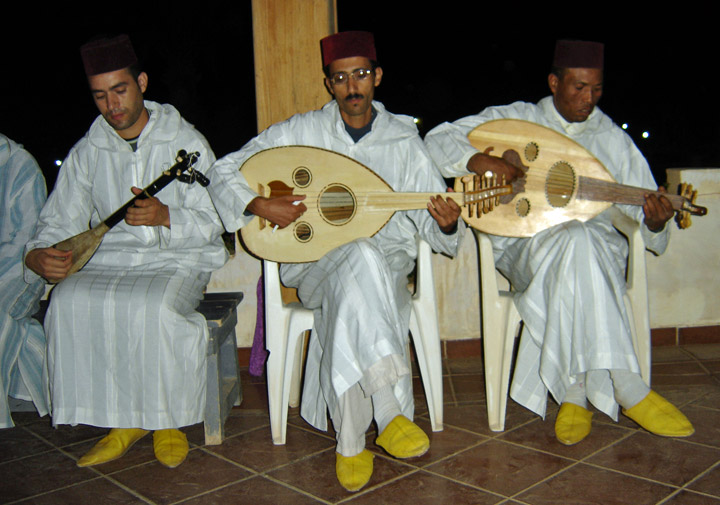 Village music is performed collectively for dancing, including ahidus and ahouach dances. Instruments include flutes and drums. These dances begin with a chanted prayer. Ritual music is performed at regular ceremonies to celebrate marriages and other important life events. Ritual music is also used as protection against evil spirits. Professional musicians (imdyazn) travel in groups of four, led by a poet (amydaz). The amydaz performs improvised poems, often accompanied by drums and rabab (a one-stringed fiddle), along with a bou oughanim who plays a double clarinet and acts as a clown for the group. 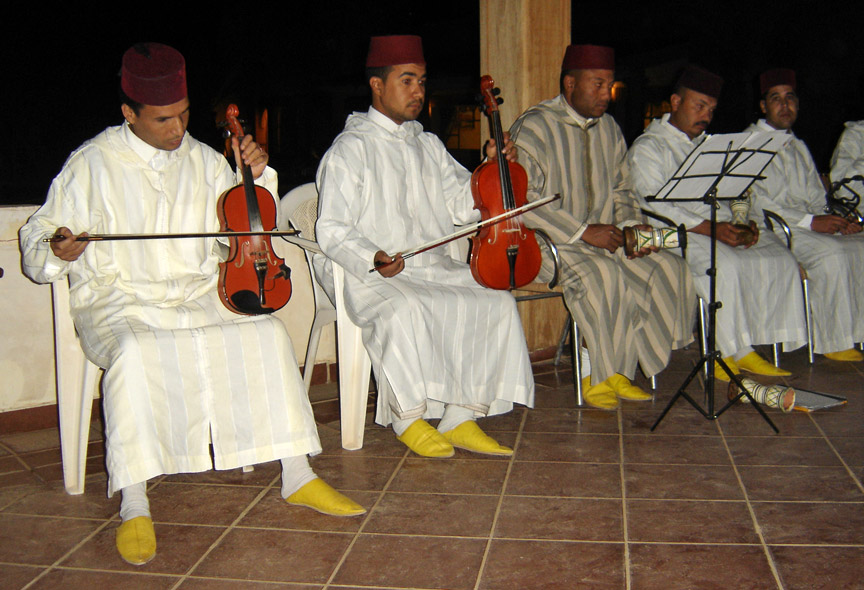 The Chleuh Berbers have professional musicians called rwais who play in ensembles consisting of lutes, rababs and cymbals, with any number of vocalist. The leader, or rayes, leads the choreography and music of the group. These performances begin with an instrumental astara on rabab, which also gives the notes of the melody which follows. The next phase is the amarg, or sung poetry, and then ammussu, a danced overture, tammust, an energetic song, aberdag, a dance, and finally the rhythmically swift tabbayt. There is some variation in the presentation of the order, but the astara always begins, and the tabbayt always ends. 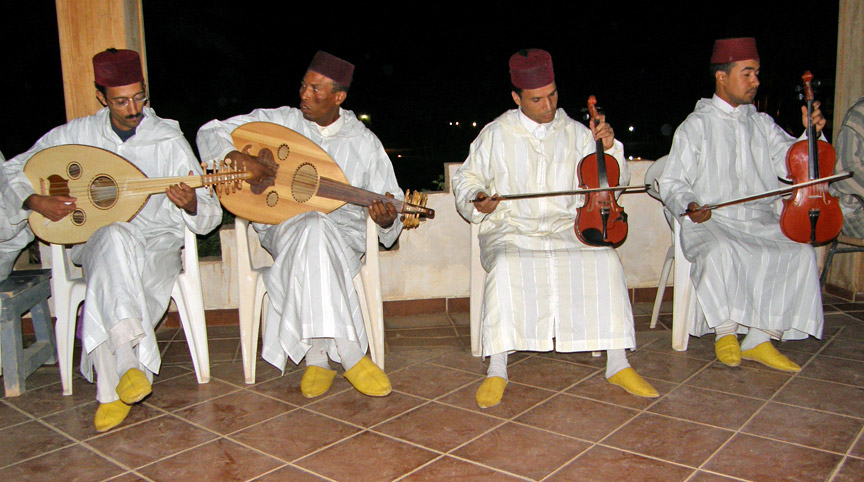 Chaabi (popular) is a music consisting of numerous varieties which are descended from the multifarious forms of Moroccan folk music. Chaabi was originally performed in markets, but is now found at any celebration or meeting. 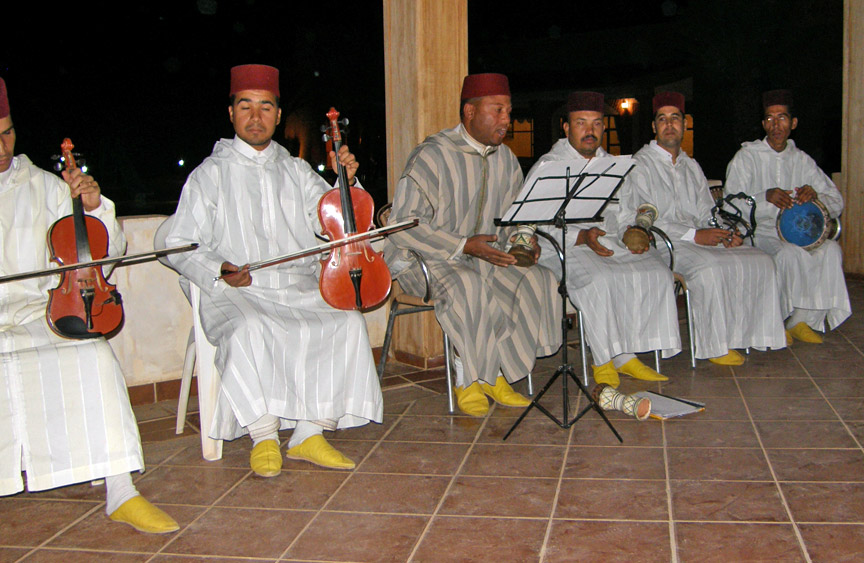 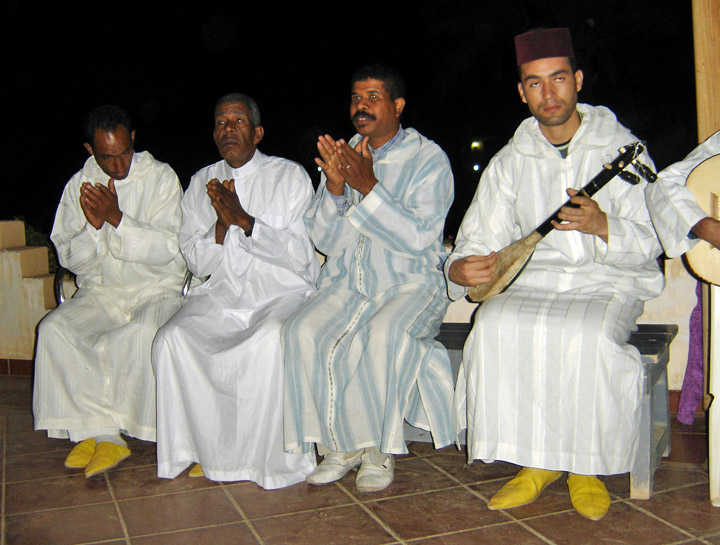 A sophisticated form of chaabi evolved in the 1970s competing with popular Egyptian and Lebanese music. These chaabi groups consisted of a lute and a hadjuj, with some form of drum. Eventually, new instruments like buzuks and electric guitars were added. The three most important early groups were Lemchaheb, Nass El Ghiwane and Jil Jilala. All three bands featured politicized lyrics that got the songwriters in trouble with the government. 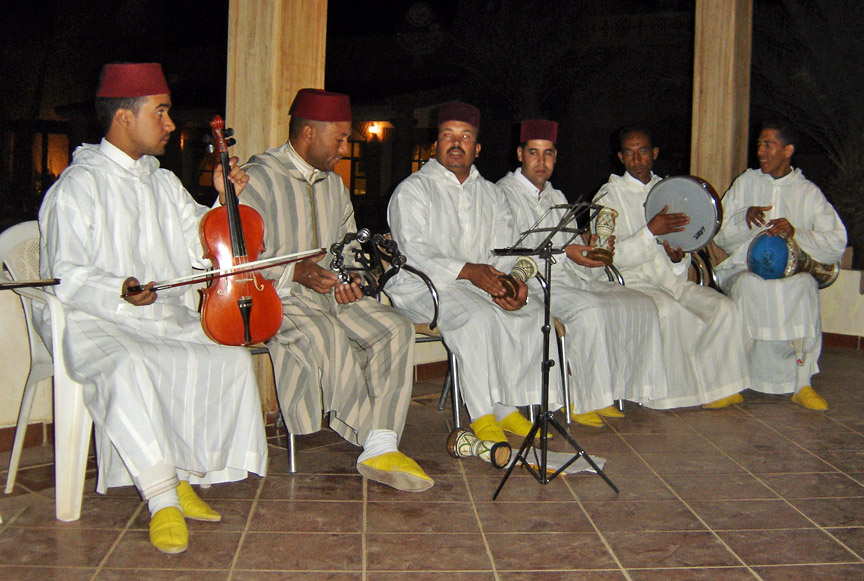 Short Video of this group 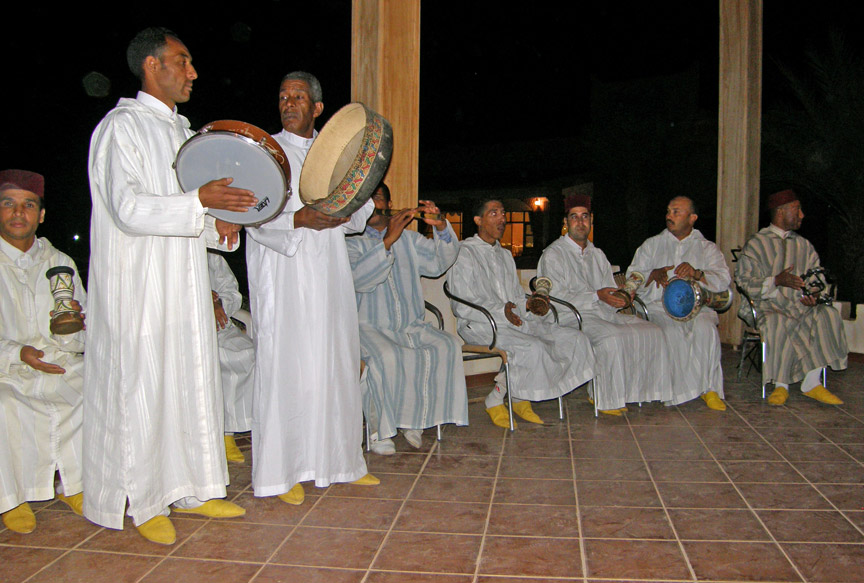 Gnawa music is considered a mystical music. It was gradually brought to Morocco by Sub-Saharan Africans and later became part of the Moroccan tradition. The ritual of the gnawa (or gnaoua) follow rules, that are part from the muslim sufi tradition and partly of African animistic origin similar to the traditions that are found in the african diaspora, Brazil, Cuba, Haiti and so forth. The centre of the ritual is the so-called "leelah" (the night), also called "derdeba", the night of trance. Here the seven spirits are evoked through around 100 chants. Especially in the muslim month of Sha'aban, which is just before Ramadan, there are "leelahs" held in the gnawa community. always danced with a glass of beer in hands for drinking. 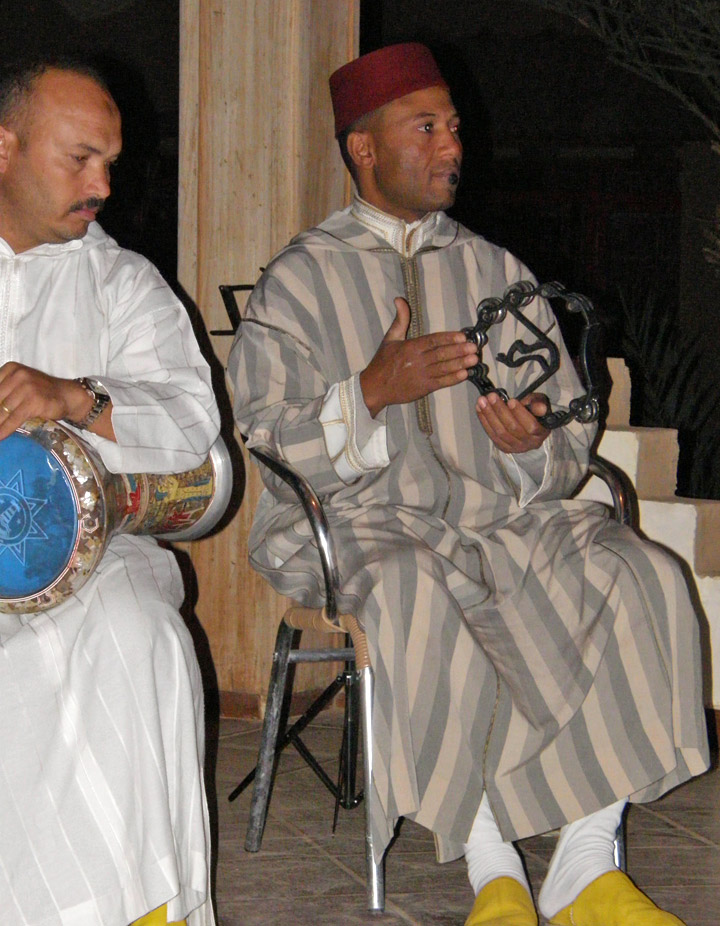 Milhûn is a form of sung poetry which uses many of the same modes and instruments as al-âla. A milhûn suite comprises two parts, the taqsim overture played on an oud or violin in a free rhythm to introduce the mode for the rest of the piece, followed by the qassida, or sung poem which is itself divided into three parts. These are the solo verses (al-aqsâm), choral refrain (al-harba) and crescendoing chorus that completes the suite (al-dîdka). 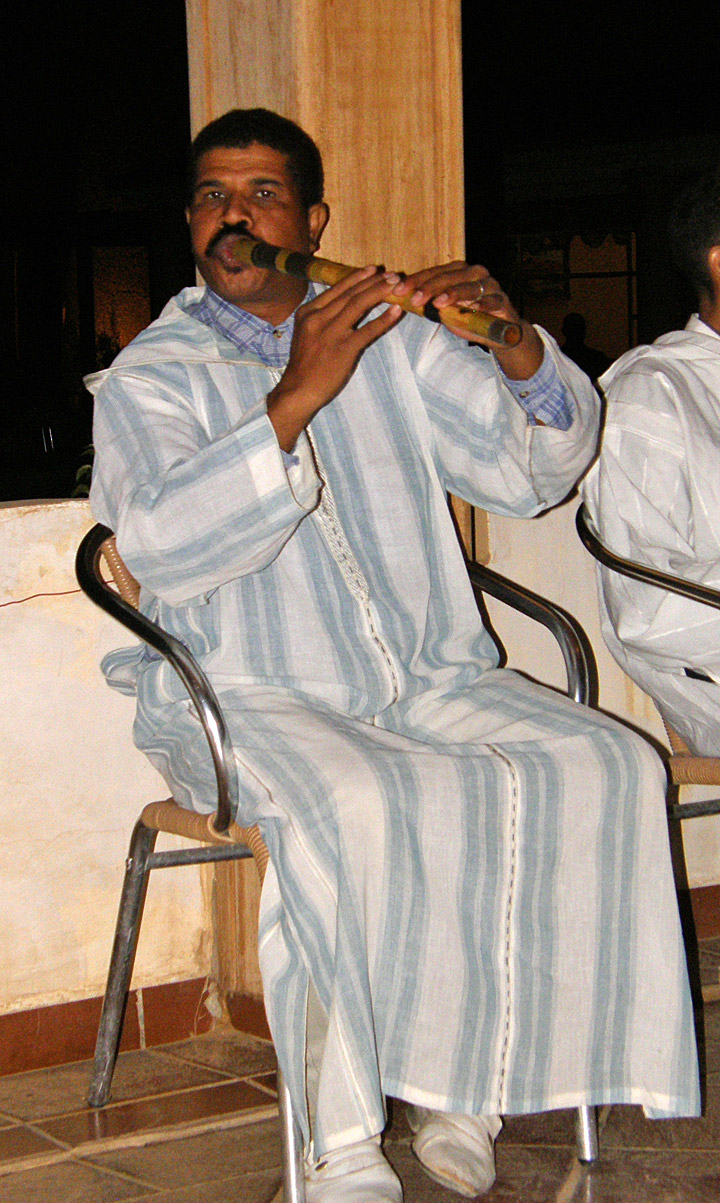 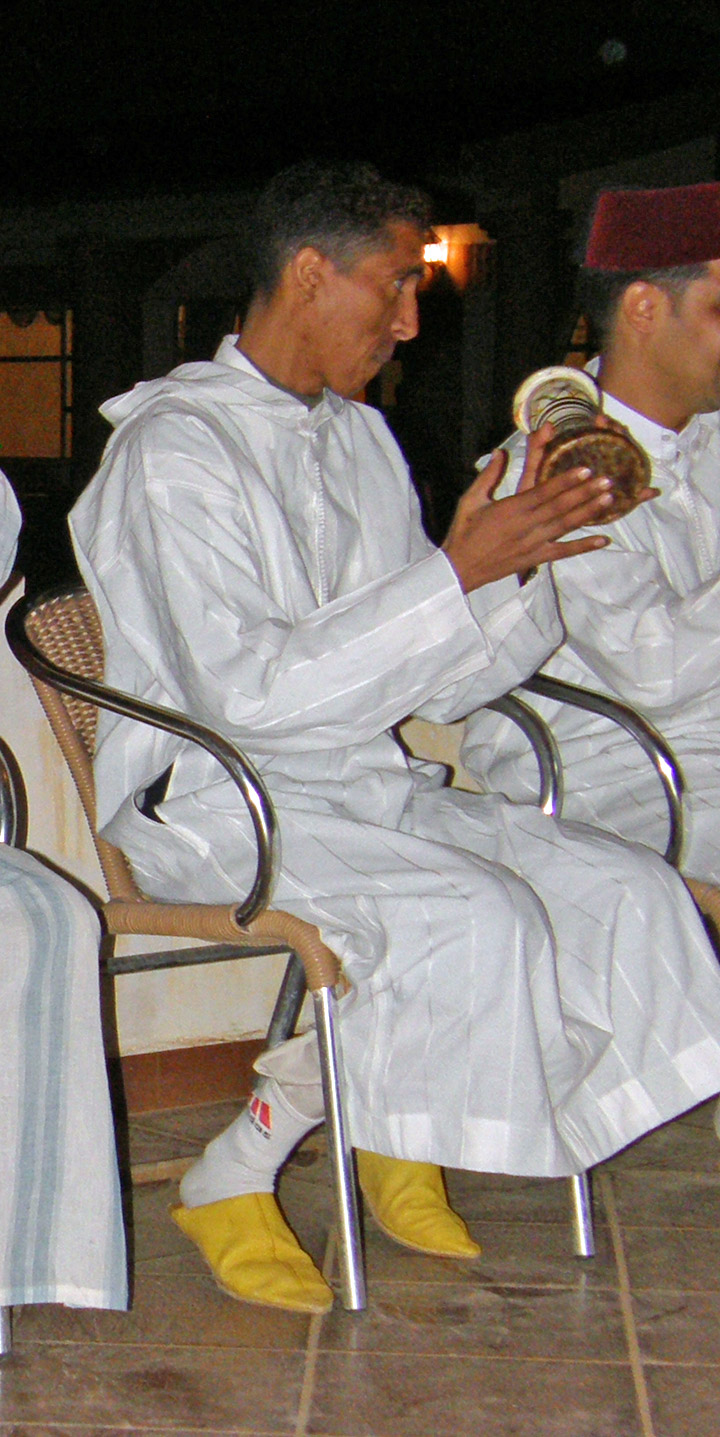 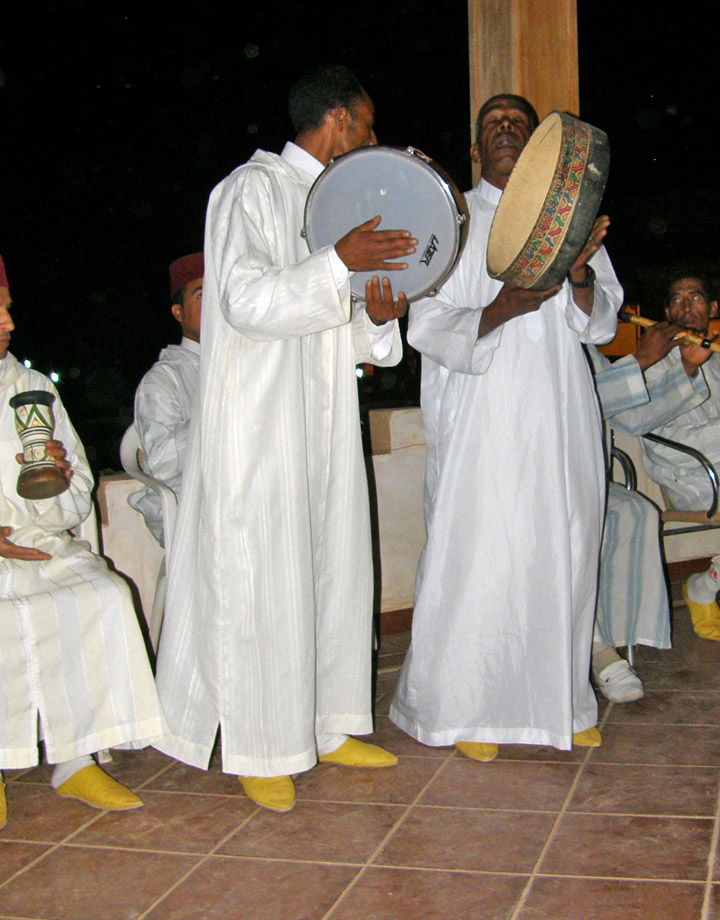 Rai is more closely associated with Algeria in the international music scene, but Morocco has produced its own stars like Cheb Mimoun and Hanino. Especially in the eastern regions of Morocco Oujda and Berkane the Rai-style has gained a lot of popularity in the beginning of the early 90s. The two major cities in the east of Morocco, Berkane and Oujda have became centres of the new revived Rai-style in Morocco. The huge presence of Algerian-born people in the East is the major factor of popularity. 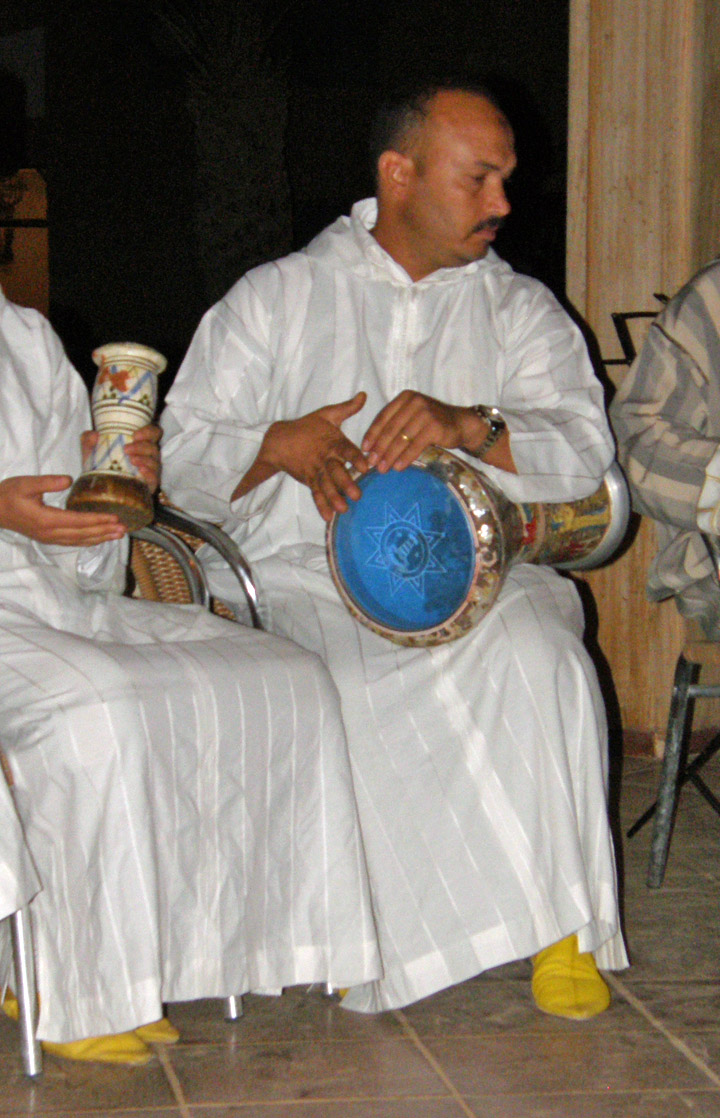 Morocco is home to the Western Tradition of Sephardic music, which is descended from the Jews expelled from Spain several centuries ago. This tradition is now more closely associated with Israel. 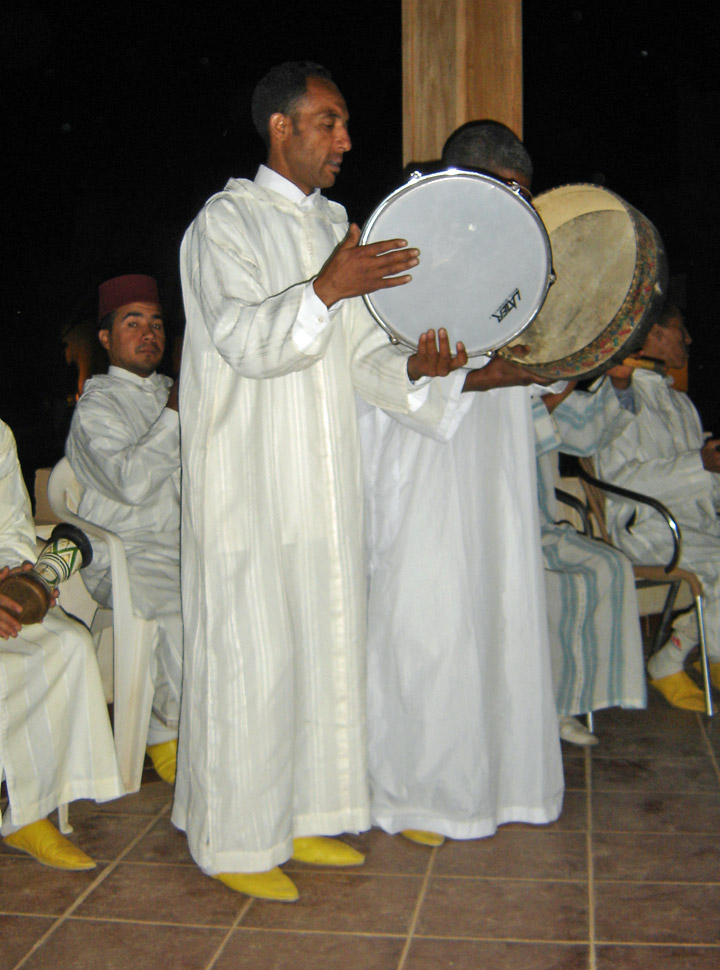 Sufi brotherhoods (tarikas) are common in Morocco, and music is an integral part of their spiritual tradition, in contrast to most other forms of Islam, which do not use music. This music is an attempt at reaching a trance state which inspires mystical ecstasy. The brothers hold hands in a circle and chant or dance. Sufi music is usually without rhythm. 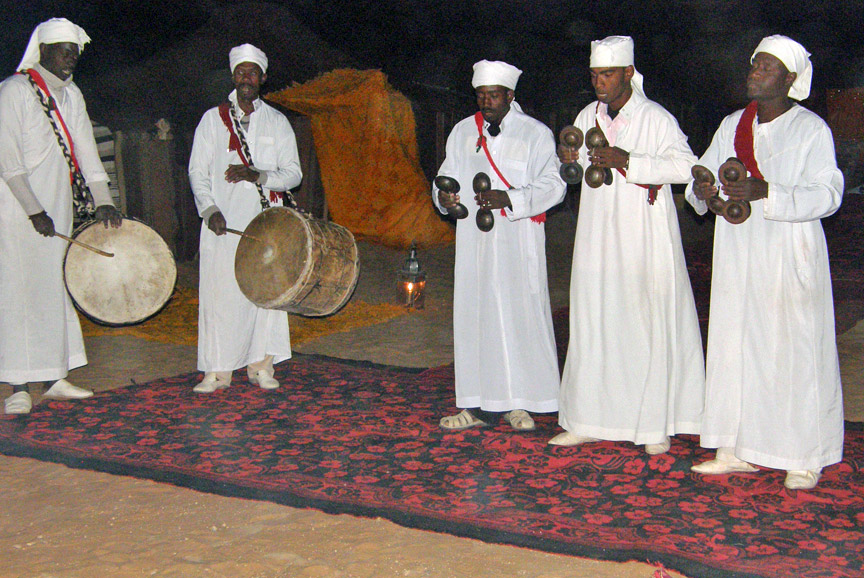 Marrakech and other regions in southern Morocco are home to the Gnawa Brotherhood, which claims descent from the Ethiopian muezzin Sidi Bilal. Gnaoua ceremonies (deiceba) are used to protect against mental illness, scorpion stings and malicious spirits. Deiceba may be related to Sub-Saharan African ceremonies and use a long-necked lute of African origin called the guembri, as well as castanets called garagab. 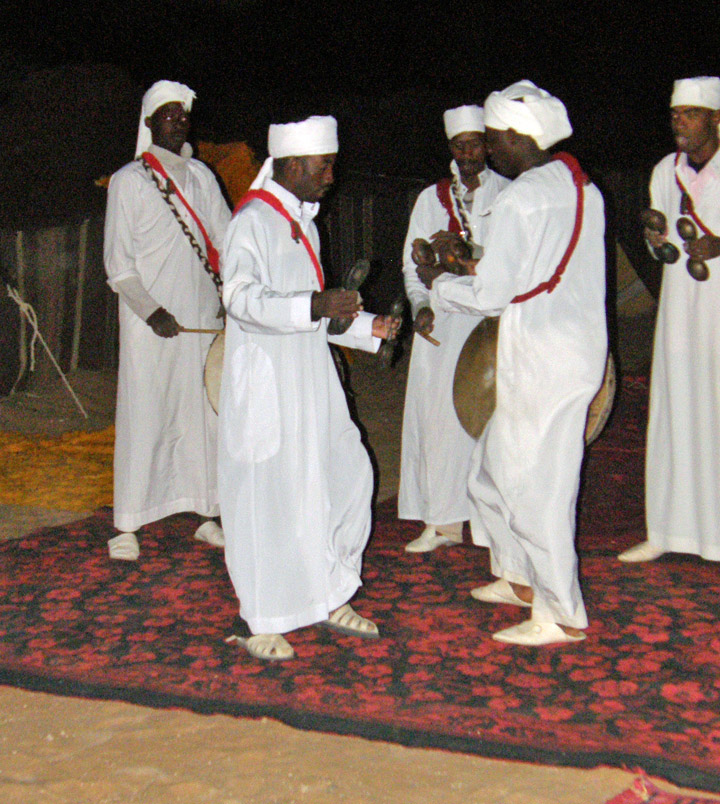 The Jilala are another brotherhood, known for their hypnotic and otherworldly music. They are devotees of Moulay Abdelkader Jilali. Instruments include the bendir (frame drum) and qsbah (flute). 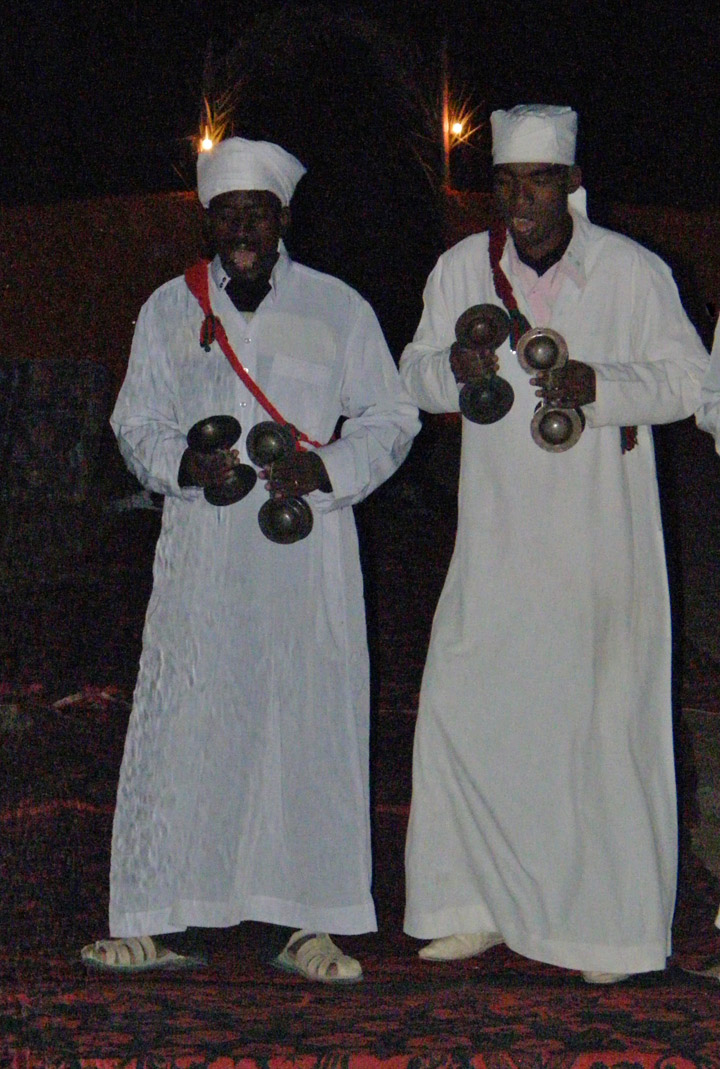 Other brotherhoods include Hamadcha (founded by Sidi Ali ben Hamdouch), Aissaoua (founded by Sidi Mohamed ben Aissa, Derkaoua, Haddaoua, Cherkaoua, Dar Damana (the sufi saints of Ouezzane). A well-known local cult is in village of Jajouka in the Ahl Srif Mountains, home of music group, Master Musicians of Jajouka. This cult commonly flourished near the sanctuary of a local saint. Jajouka musicians play healing music said to be written by their ninth century patron saint Sidi Achmed Schiech. They also perform a ritual called Boujeloud which is likened to the worship of the God Pan. 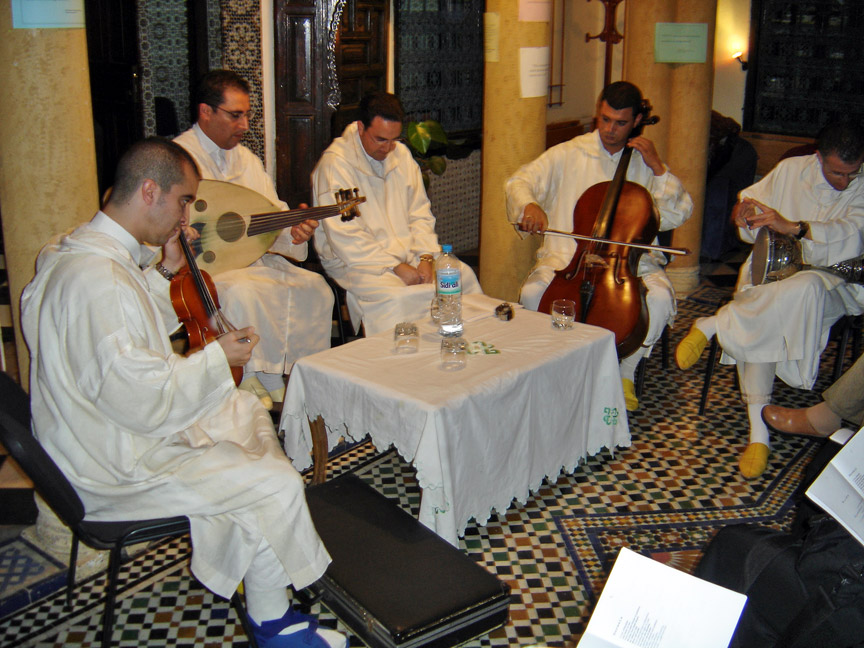