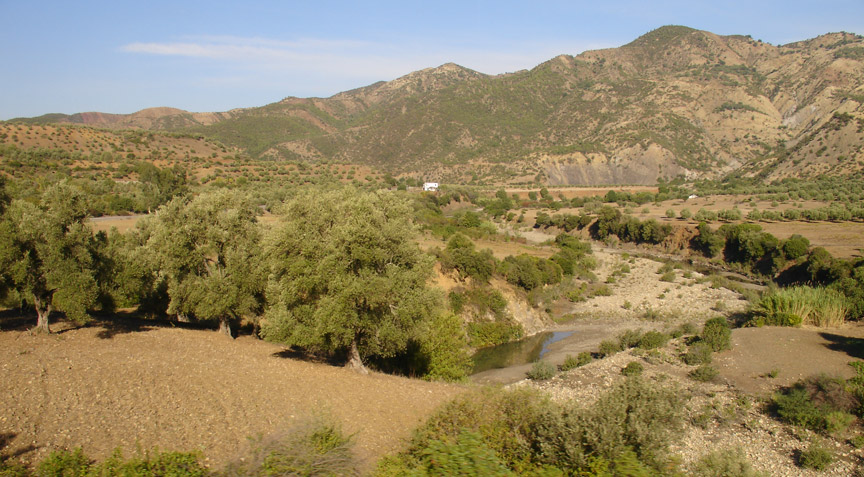 Berbers are the indigenous peoples of North Africa west of the Nile Valley. They are discontinuously distributed from the Atlantic to the Siwa oasis, in Egypt, and from the Mediterranean to the Niger River. They speak various Berber languages, which together form a branch of the Afroasiatic language family. Between fourteen and twenty-five million Berber-speakers live within this region, most densely in Morocco and becoming generally scarcer eastward through the rest of the Maghreb and beyond. 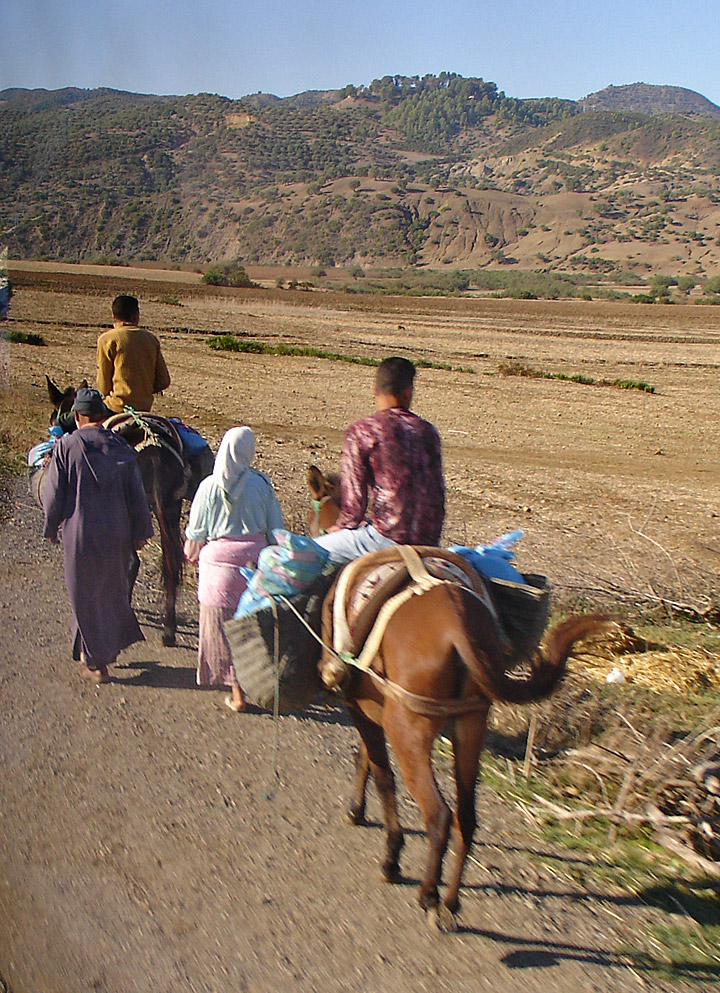 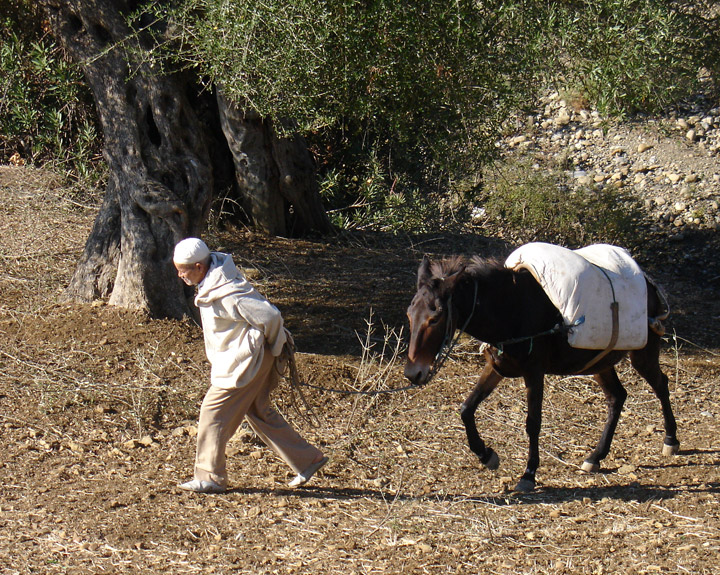 Many Berbers call themselves some variant of the word Imazighen (singular Amazigh), meaning "free men". This is common in Morocco, but elsewhere within the Berber homeland a local, more particular term, such as Kabyle or Chaoui, is more often used instead. Historically Berbers have been variously known, for instance as Libyans by the ancient Greeks, as Numidians and Mauri by the Romans, and as Moors by medieval Europeans. The modern English term is borrowed from Arabic, but the deeper etymology of "Berber" is not certain. 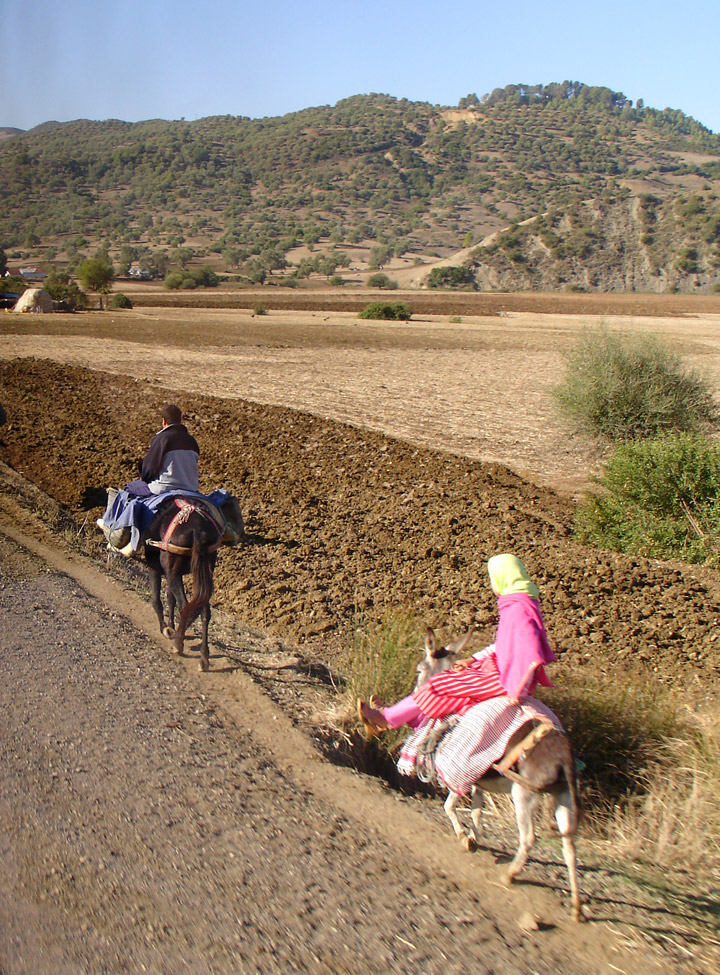 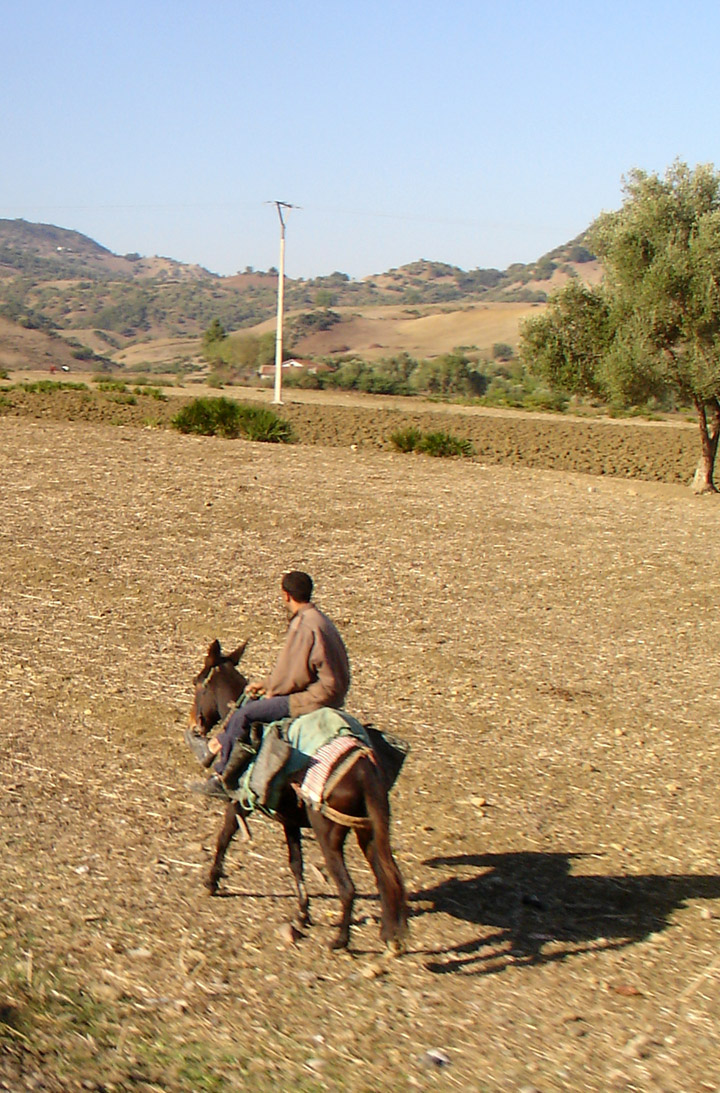 The Berbers have lived in North Africa between western Egypt and the Atlantic Ocean for as far back as records of the area go. The earliest inhabitants of the region are found on the Saharan rock art. References to them also occur frequently in ancient Egyptian, Greek, and Roman sources.[5] Berber groups are first mentioned in writing by the ancient Egyptians during the Predynastic Period, and during the New Kingdom the Egyptians later fought against the Meshwesh and Libu tribes on their western borders. From about 945 BC the Egyptians were ruled by Meshwesh immigrants who founded the Twenty-second Dynasty under Shoshenq I, beginning a long period of Berber rule in Egypt. They long remained the main population of the Western Desert—the Byzantine chroniclers often complained of the Mazikes (Amazigh) raiding outlying monasteries there. 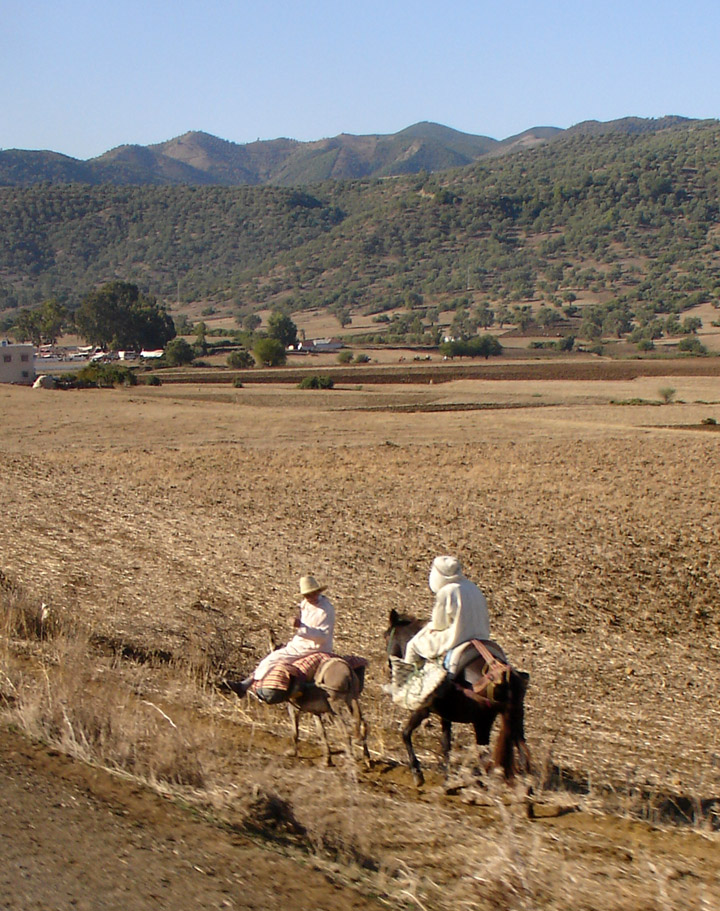 For many centuries the Berbers inhabited the coast of North Africa from Egypt to the Atlantic Ocean. Over time, the coastal regions of North Africa saw a long parade of invaders, settlers, and colonists including Phoenicians (who founded Carthage), Greeks (mainly in Cyrene, Libya), Romans, Vandals and Alans, Byzantines, Arabs, Ottomans, and the French and Spanish. Most if not all of these invaders have left some imprint upon the modern Berbers as have slaves brought from Southern Europe to the Barbary Coast by Barbary pirates (one estimate places the number of Europeans brought to North Africa during the Ottoman period as high as 1.25 million). Berber interactions with neighboring Sudanic empires, sub-Saharan Africans, and nomads from East Africa have also left varying impressions upon the people across the vast expanse of north Africa. 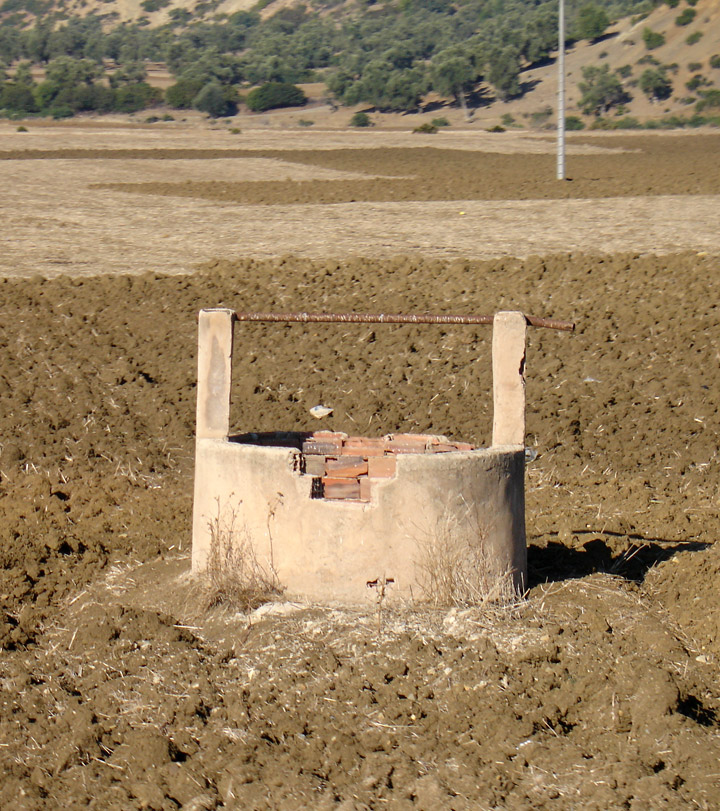 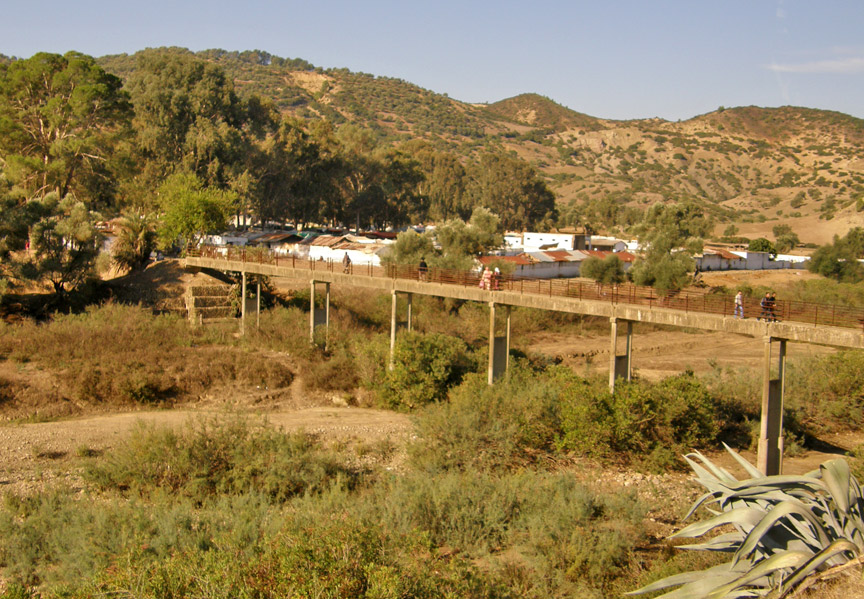 The areas of North Africa which retained the Berber language and traditions have, in general, been those least exposed to foreign rule—in particular, the highlands of Kabylie in Algeria and the Chleuh and Riffian peoples in Morocco, most of which even in Roman and Ottoman times remained largely separate and independent. The Phoenicians never even penetrated beyond the port cities along the coast. While many peoples have made contact and exchanged goods and services with native North Africans, full contact had been only with the Romans whereby the Numidian and Mauritanian provinces had been fully integrated as Provinces of the Roman Republic, and their peoples Roman Citizens. Amongst the people who had entered and settled with the autochthonous people of North Africa, are the 80,000 families of Germanic Vandals also referred to as "The Barbarians" by the Romans and the Mediterraneans in general who neither perished nor returned to Germania, but mixed with the natives and ultimately resulted in the eviction of the Roman forces from North Africa. 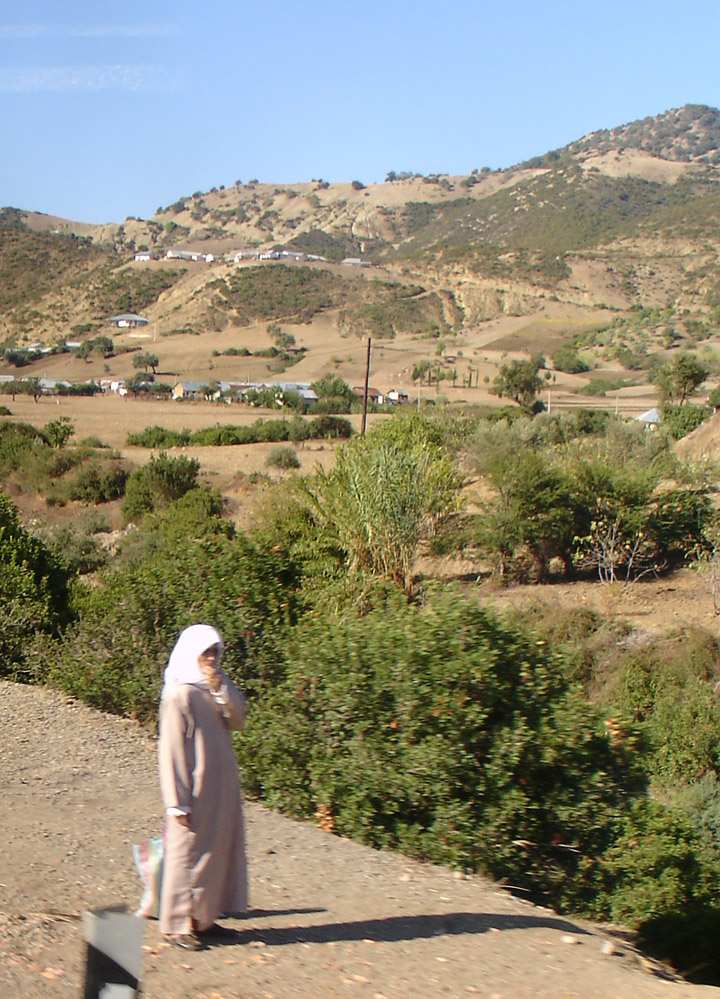 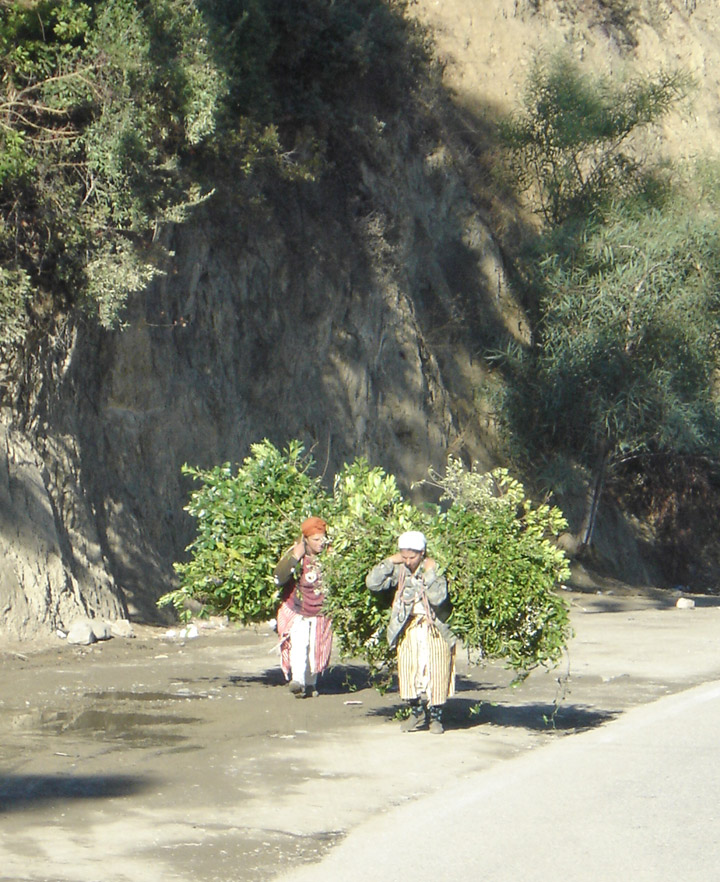 Until the 7th century, the region of North Africa practiced many religions including various forms of indigenous rituals. 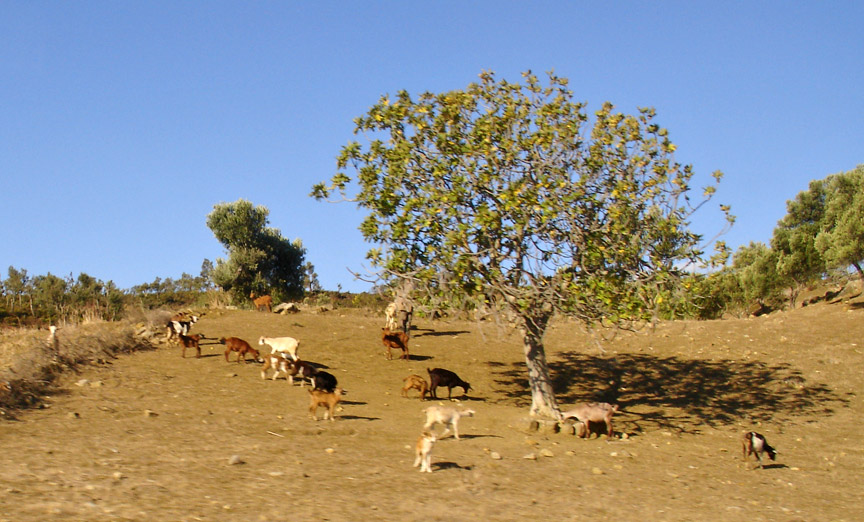 Before the ninth century, Northwest Africa was largely Berber-speaking. It was primarily Sufi Muslim, with Jewish populations in the valleys and Christians in the highlands. This was particularly true in the Algerian Aures and Kabyle regions, from which came several Berber Roman Emperors, Saint Augustine, along with the roots of Roman Catholicism. The main spoken language was Tamazight Berber, with Greek and Latin the chief written languages. The process of word borrowing started only around the ninth century with the Fatimids of Egypt. The Banu Hilal reduced the Zirids to a few coastal towns and took over much of the plains. Governments in Algeria, Tunisia, and Morocco encouraged the Arabization of the region, as had the French colonial regime that preceded them. 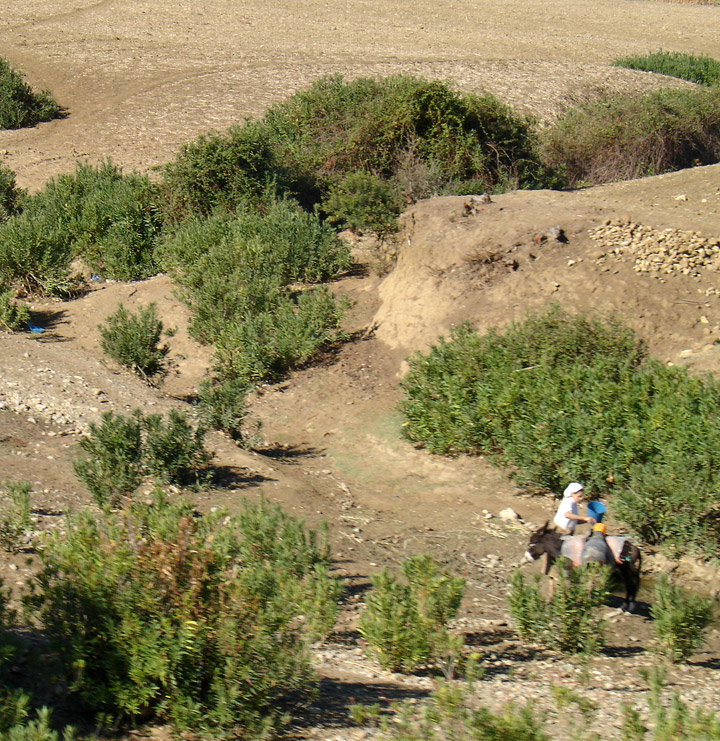 getting water from the stream bed 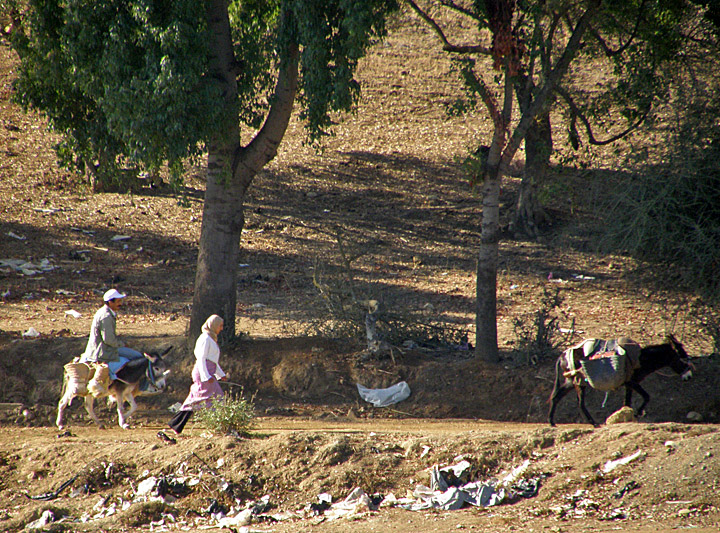 The Berbers live mainly in Morocco (30% of the population) and in Algeria (about 8%-15% of the population), as well as Libya and Tunisia, though exact statistics are unavailable. Most North Africans who consider themselves Arab also have mainly Berber ancestry. Prominent Berber groups include the Kabyles of northern Algeria, who number approximately 4 million and have kept, to a large degree, their original language and culture; and the Chleuh (Francophone plural of Arabic "Shalh" and Tashelhiyt ) of south Morocco, numbering about 8 million. Other groups include the Riffians of north Morocco, the Chaouia of Algeria, and the Tuareg of the Sahara. There are approximately 2.2 million Berber immigrants in Europe, especially the Riffians in the Netherlands and Kabyles in France. Some proportion of the inhabitants of the Canary Islands are descended from the aboriginal Guanches--usually considered to have common origins with Berbers--among whom a few Canary Islander customs, such as the eating of gofio, originated. 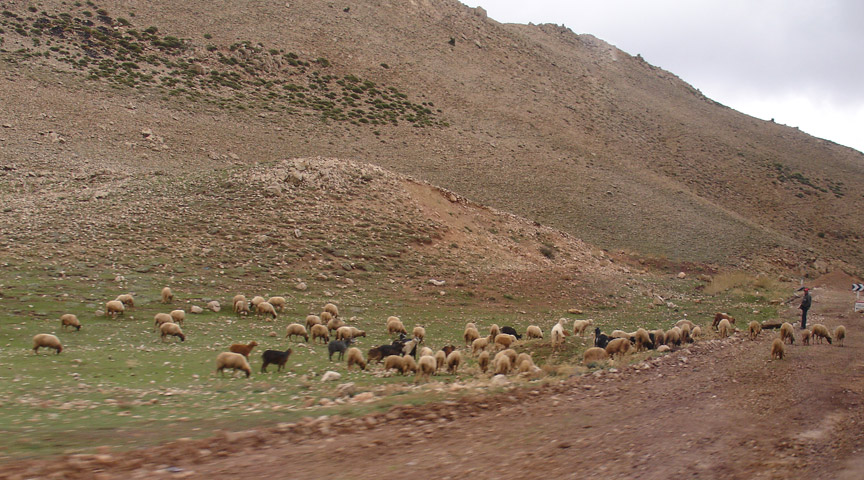 Shepard and his sheep 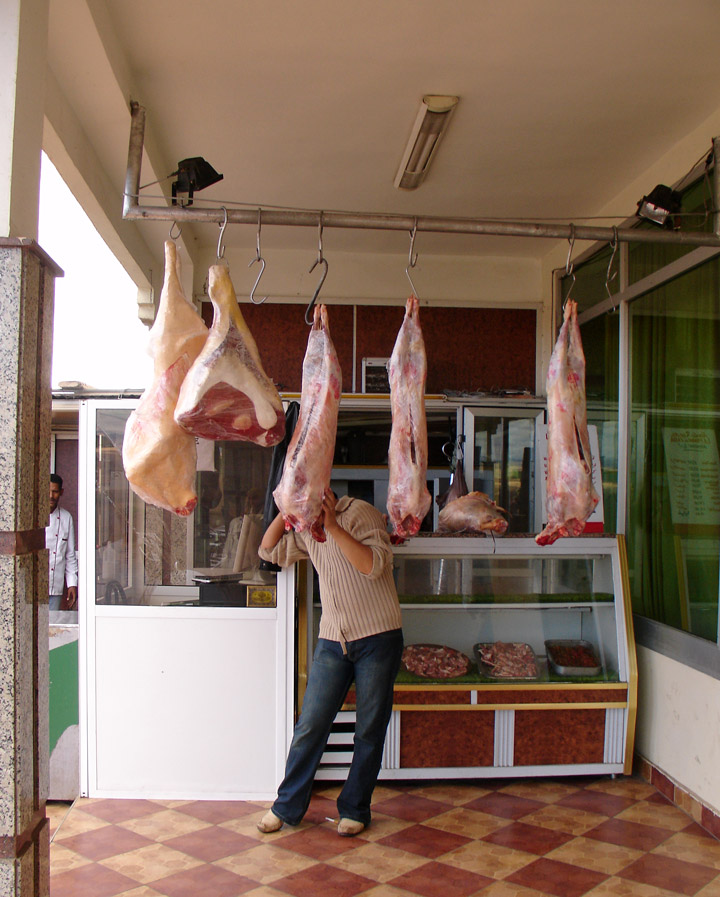 Although stereotyped in the West as nomads, most Berbers were in fact traditionally farmers, living in the mountains relatively close to the Mediterranean coast, or oasis dwellers; the Tuareg and Zenaga of the southern Sahara, however, were nomadic. Some groups, such as the Chaouis, practiced transhumance. 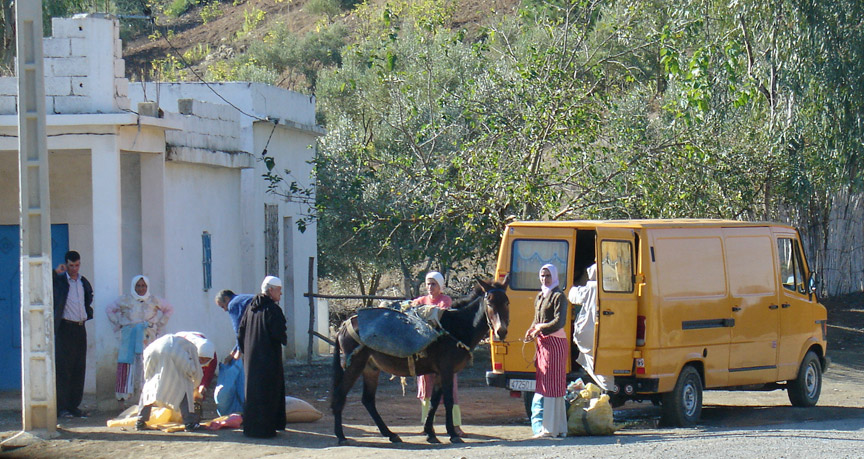 Political tensions have arisen between some Berber groups (especially the Kabyle) and North African governments over the past few decades, partly over linguistic and cultural issues; for instance, in Morocco, giving children Berber names was banned. 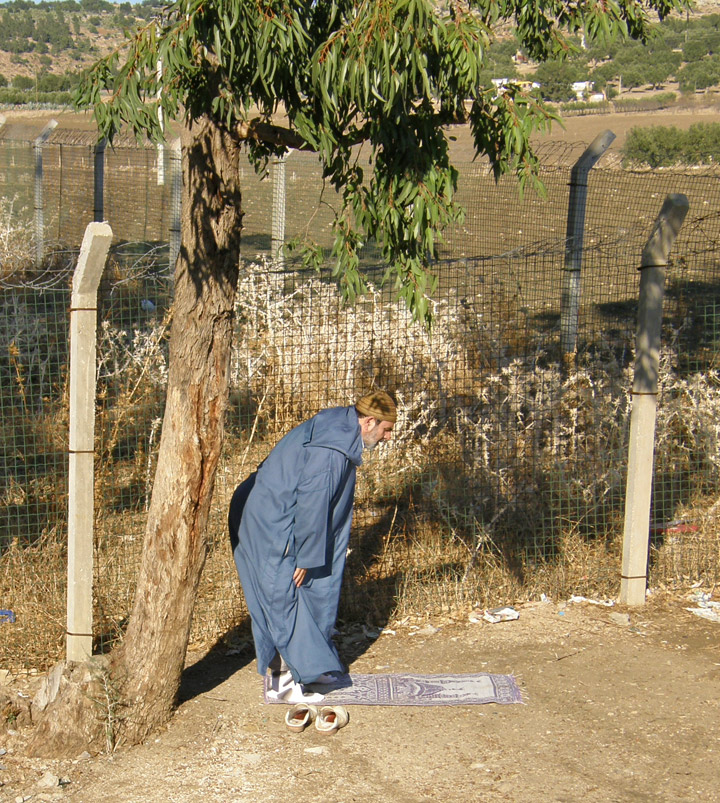 shoes off, on his carpet 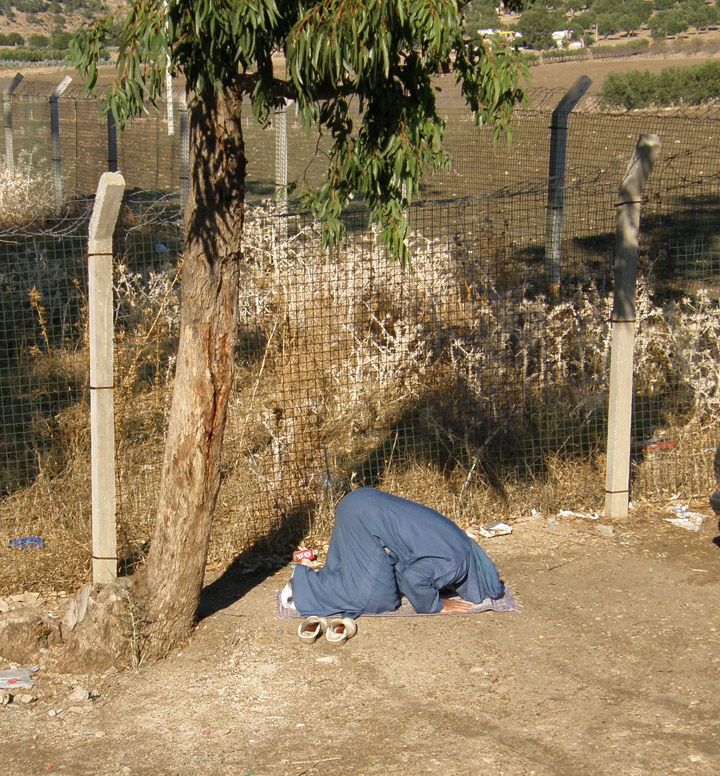 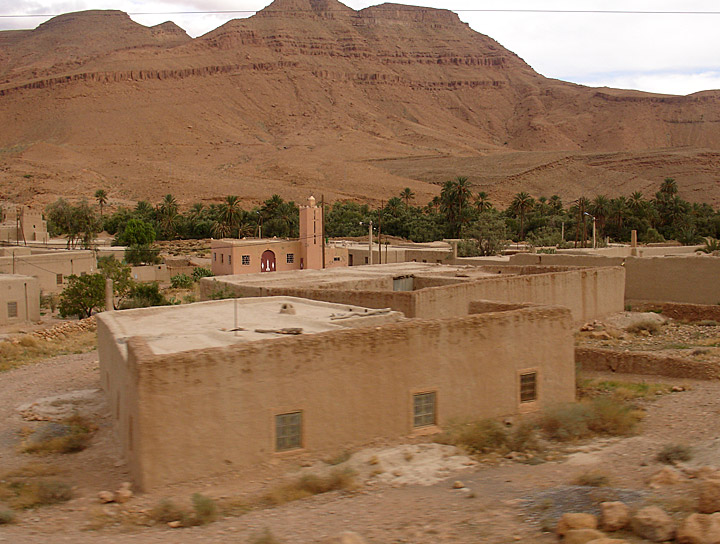 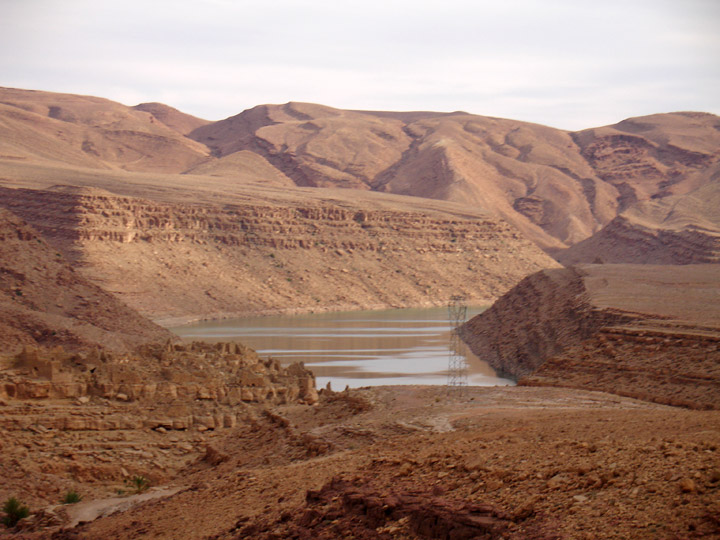