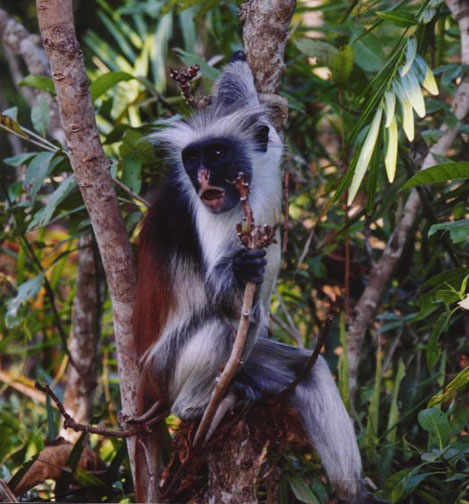 One of the most striking features of the red colobus is a crown of long, white hairs which fans out around the face in tufts. The face is mainly black but notice the pink areas around the mouth and nose. If you look closely you will see that individual monkeys have different face patterns. 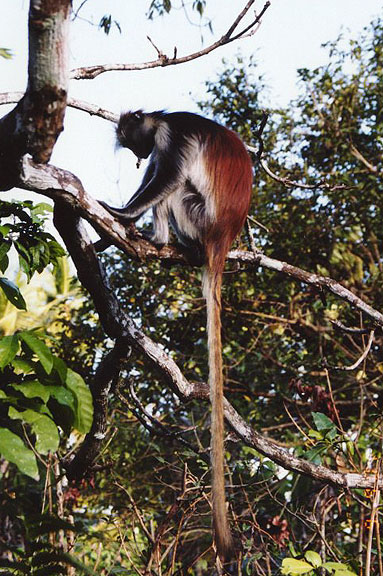 The back of the head and back are very red, separated by a black stripe across the shoulders which continues down the arms. The tail has varying shades of red, often graduating to a sandy orange. Adult males and females are almost equal in body size. Notice how few adult males there are in the group. There are usually only from one to four adult males, with many more adult females and young of different ages. To distinguish infants of less than three months look out for their black backs; these change to red by six months. 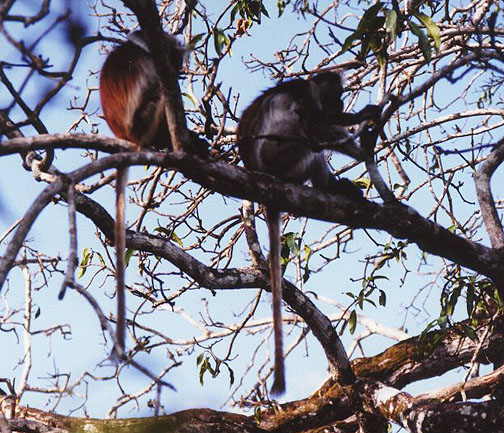 HOW DO THEY LIVE?

The monkeys are highly social and live in groups of about thirty to fifty individuals. They begin feeding early in the morning and are most active during the cooler parts of the day. If you hear loud calls from the adult males it often means the group is about to move from tree to tree to eat. Red colobus eat young leaves, flowers, leaf shoots, unripe fruit and seeds. The most common kinds of trees that colobus feed on are black plum, various species of wild fig trees, and red mahogany, as well as introduced species such as Indian almond, coconut and mango. Unlike other monkeys, red colobus do not eat ripe fruit as they are unable to digest sugars. Their four-chambered stomachs break down their food using bacteria which are kept active by feeding regularly throughout the day. The colobus also eat charcoal and this may help their digestive system to cope with the poisons the leaves contain. 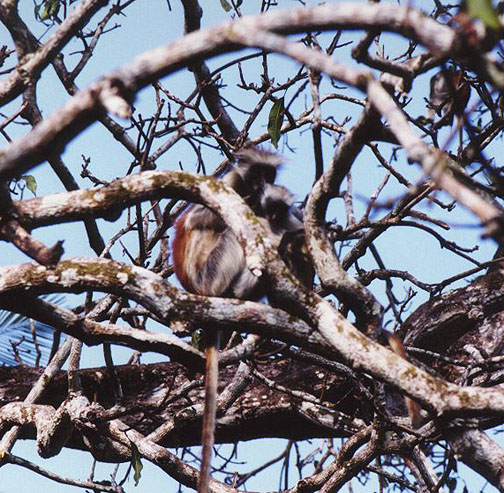 The resting periods between meals are good times to see the monkeys playing and grooming. You may observe mothers feeding their young, which they do for approximately seventeen months, although sometimes adult males suckle too, 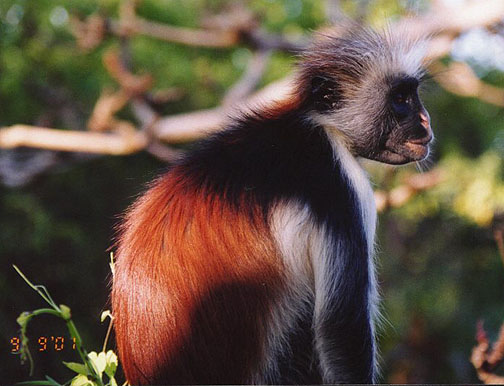 Zanzibar red colobus live in a wide variety of drier areas of coastal thickets and coral rag scrub, as well as mangrove swamps and agricultural areas. About one third of the red colobus live in and around Jozani Forest- Ironically, the easiest monkeys to see are on farm land adjacent to the reserve. They are used to people and the low vegetation means they come close to the ground.

In Zanzibar Kiswahili, the name for the red colobus is kima punju -- "poison monkey"- and this has associations with a kind of poison used by evil-doers. Local people believe that when the monkeys have fed in an area, the trees and crops die. And dogs are thought to lose their fur if they eat the colobus. The term punju is also used to differentiate the smell of the colobus from Sykes and vervet monkeys. Colobus smell stronger and are therefore never kept as pets. 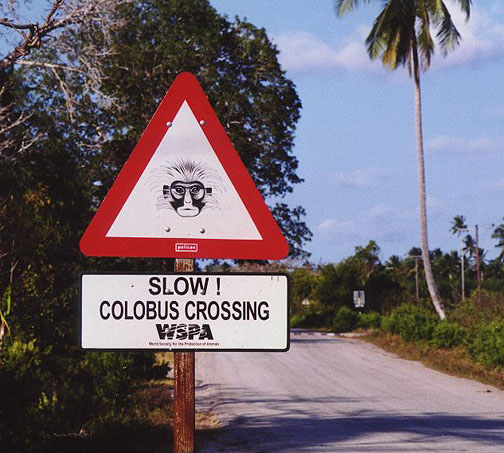