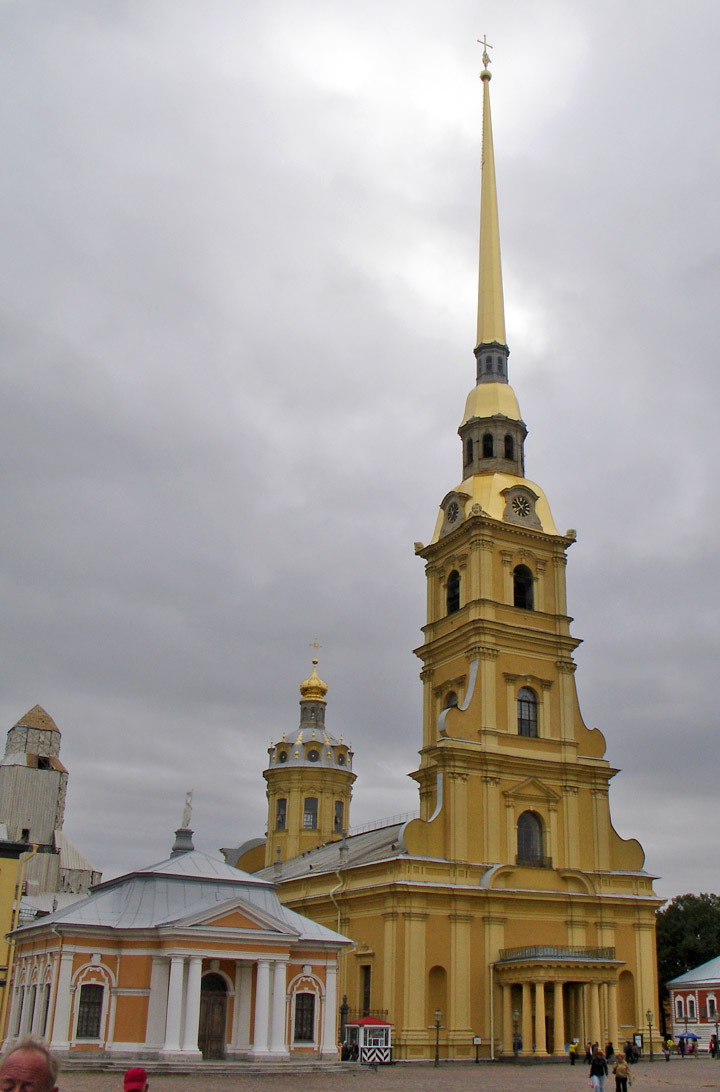 The Peter and Paul Cathedral

The Peter and Paul Cathedral is located inside the Peter and Paul Fortress in St. Petersburg, Russia. The fortress, originally built under Peter the Great and designed by Domenico Trezzini, is the first and oldest landmark in St. Petersburg built between 1703 and 1733 on Zayachy Island along the Neva River. Peter's main reason for building the fort was for protection against a potential attack by the Swedes.

The cathedral is named after Saints Peter and Paul The current cathedral is the second one on the site. The first, built soon after Peter's founding of the city, was consecrated by Archbishop Iov of Novgorod in April 1704. The current building, the first stone church in St. Petersburg, was designed by Trezzini and built between 1712 and 1733. Its spire reaches a height of 404 feet and features an angel holding a cross at its top. This angel is one of the most important symbols of St. Petersburg. When renovators were working to clean the angel in 1997, they found a note bottle left in one of the folds of the angel's gown. In the note, renovators from 1953 apologized for they felt was rushed and shoddy work (Khrushchev wanted the angel refurbished for the 150th anniversary of the city that year). It is said that the renovators in 1997 left another message for future generations, but the contents of that message have not been revealed. 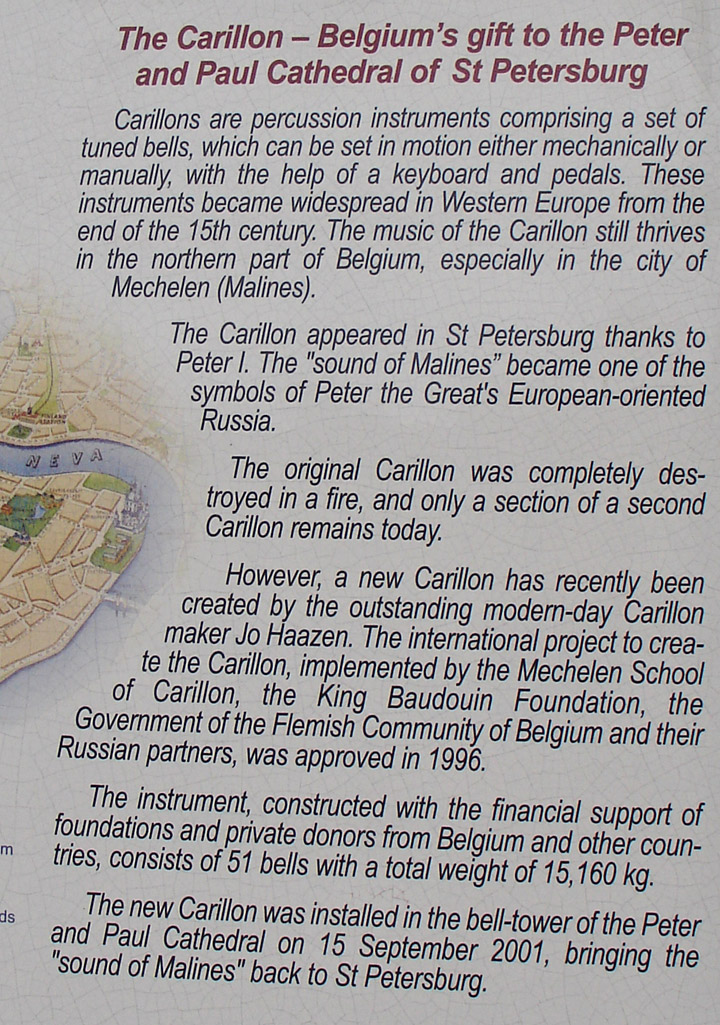 The cathedral was closed in 1919 and turned into a museum in 1924. It is still a museum, but religious services have been held there since 2000. 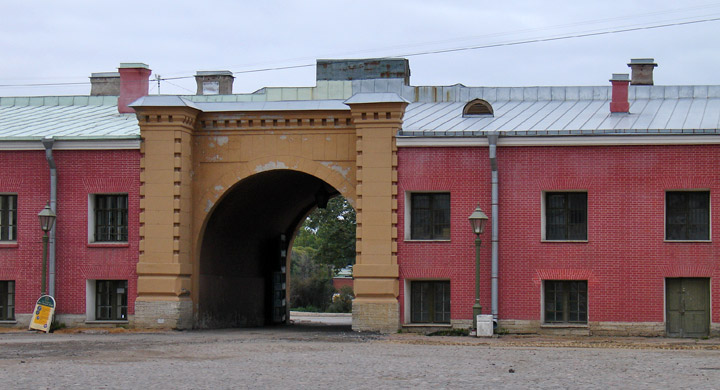 one of the walls of the Peter and Paul Fortress

The cathedral houses the remains of almost all the Russian Emperors and Empresses from Peter the Great to Nicholas II and his family who were finally laid to rest in July 1998. Of the Post-Petrine rulers, only Peter II and Ivan VI are not buried here. Peter II is in the Cathedral of Michael the Archangel in the Moscow Kremlin. Ivan VI was executed and buried in the fortress of Shlisselburg.) The cathedral has a typical Flemish carillon, a gift of the Flemish city of Mechelen, Flanders. 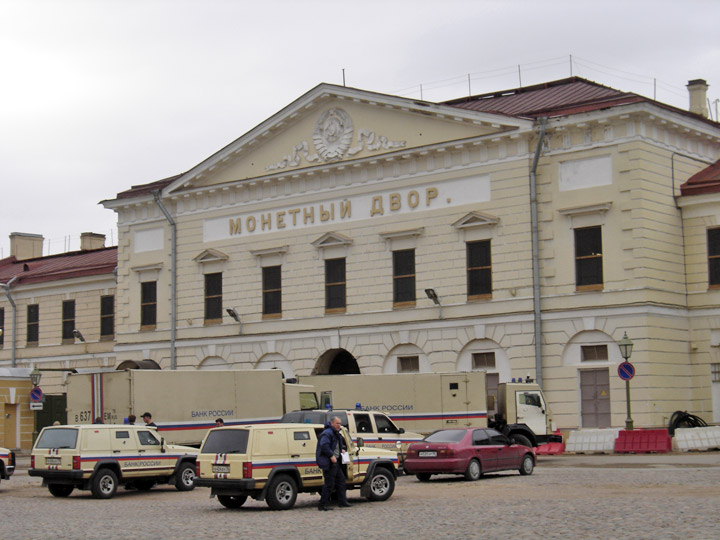 On September 28, 2006, 78 years after her death, Maria Feodorovna, Empress of Russia, was reinterred in the Cathedral of St Peter and Paul. Wife of Tsar Alexander III, and mother of Nicholas II, (the last Russian Tsar), Maria Feodorovna died on 13 October 1928 in exile in her native Denmark. and was buried in Roskilde Cathedral in Denmark. In 2005, the governments of Denmark and Russia agreed that the Empress's remains should be returned to Saint Petersburg in accordance with her wish to be interred next to her husband 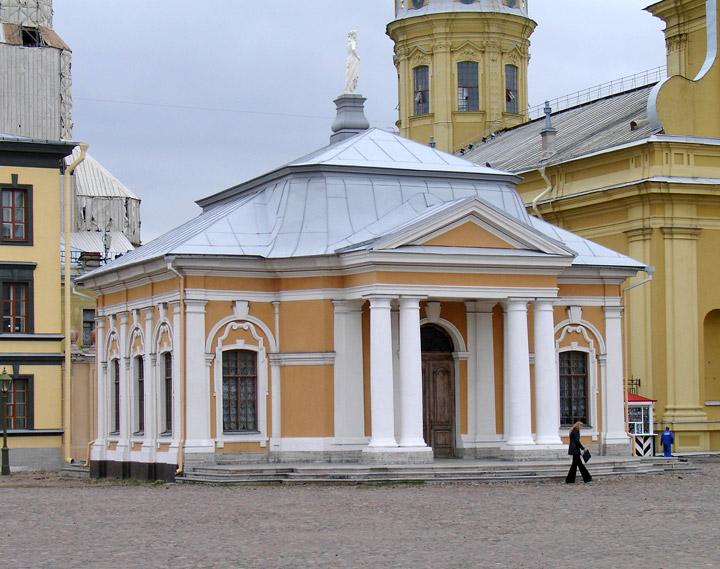 the chapel connected to the cathedral

The cathedral was the cathedral church (i.e., the seat of the bishop; the term cathedral, sobor in Russian, can mean the seat of a bishop, but it can also mean simply a large or important church) of the city until 1859 (when St. Isaac's became the city's cathedral.) The current cathedral church of St. Petersburg is the Kazan Cathedral on Nevsky Prospect. 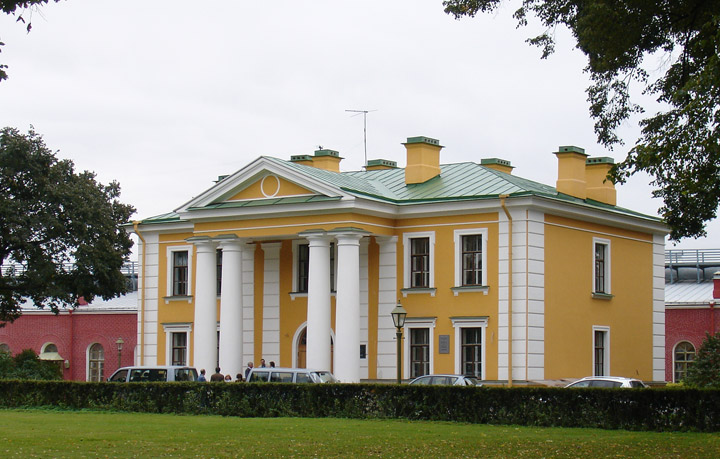 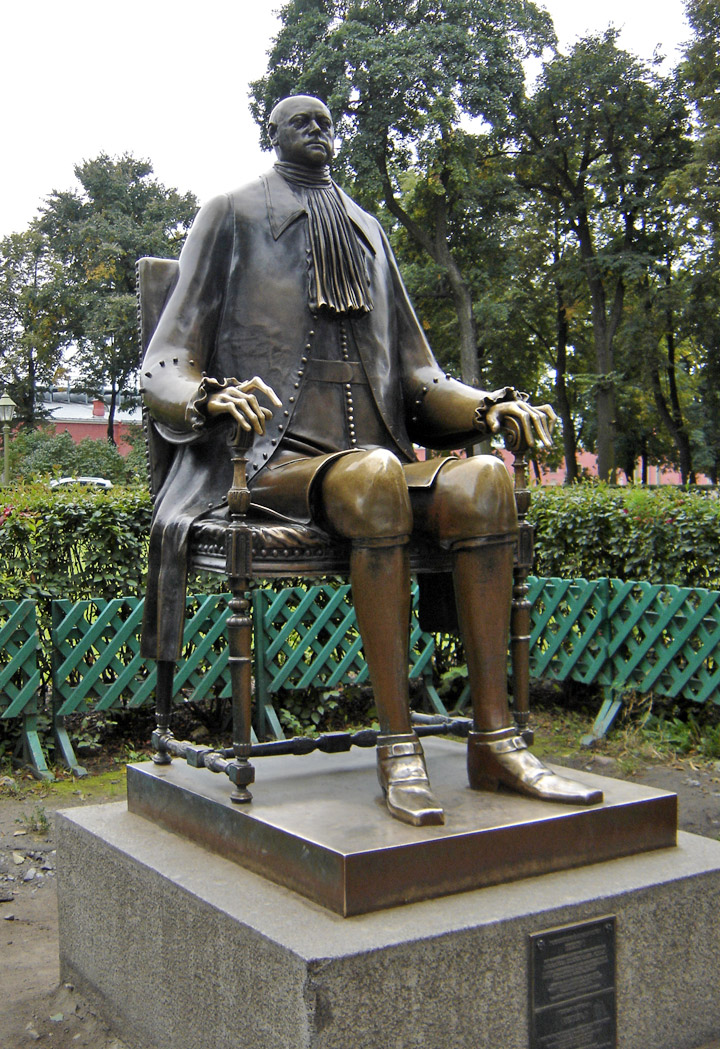 contemporary statue of Peter the Great

Interior of the Cathedral 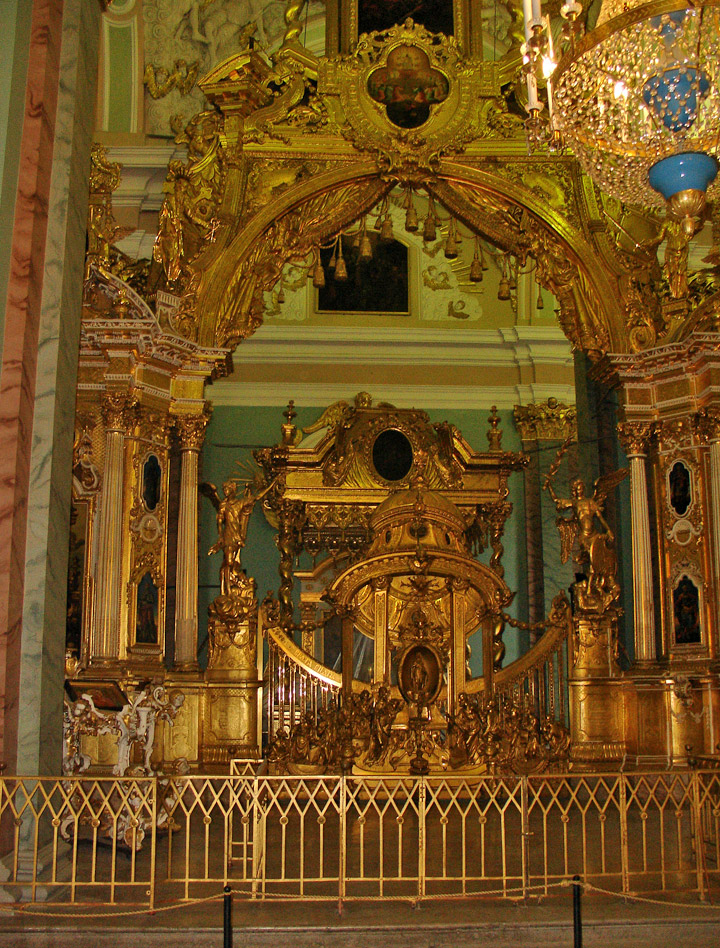 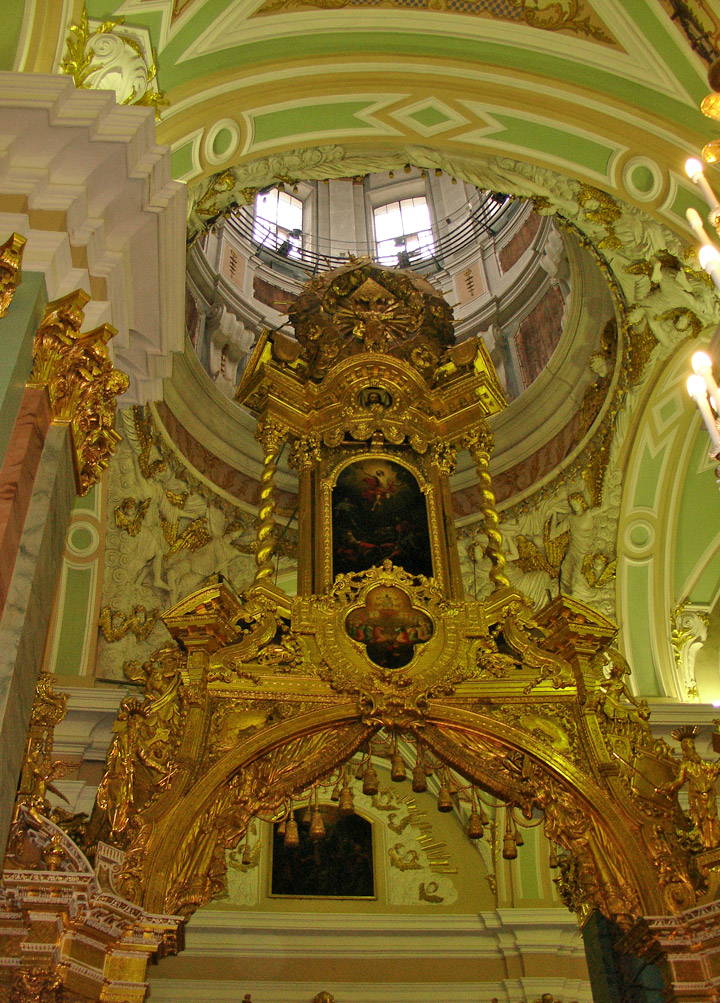 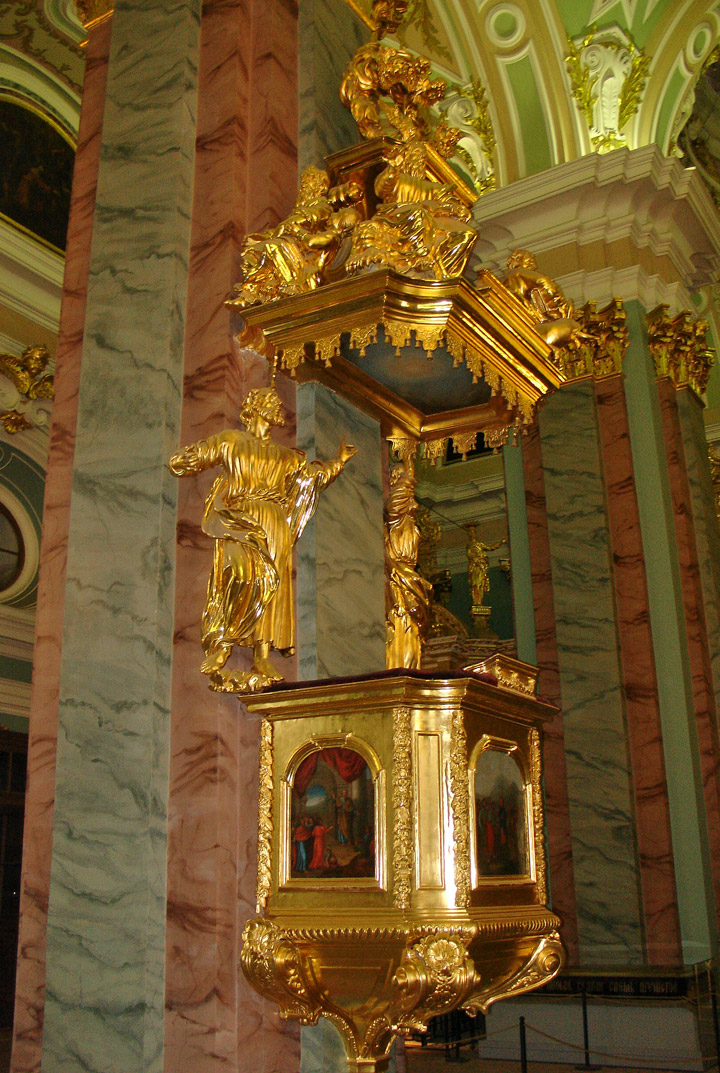 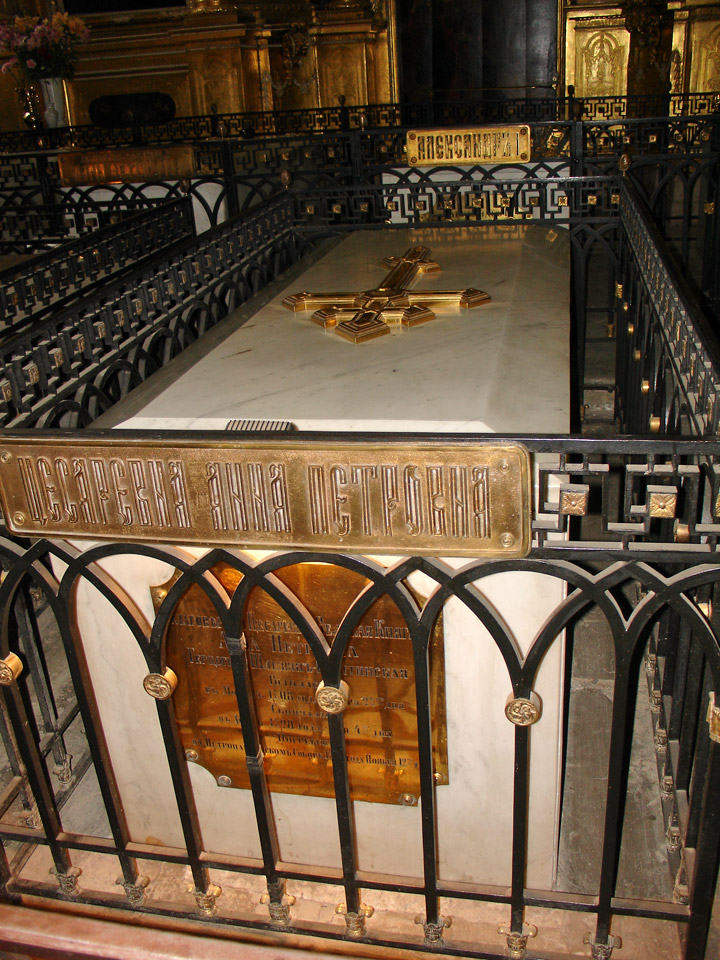 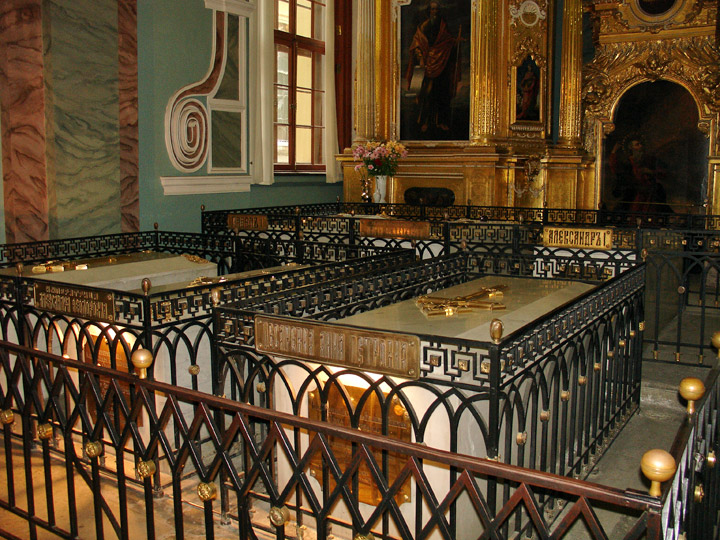 under these monuments the Tsars are buried in the ground 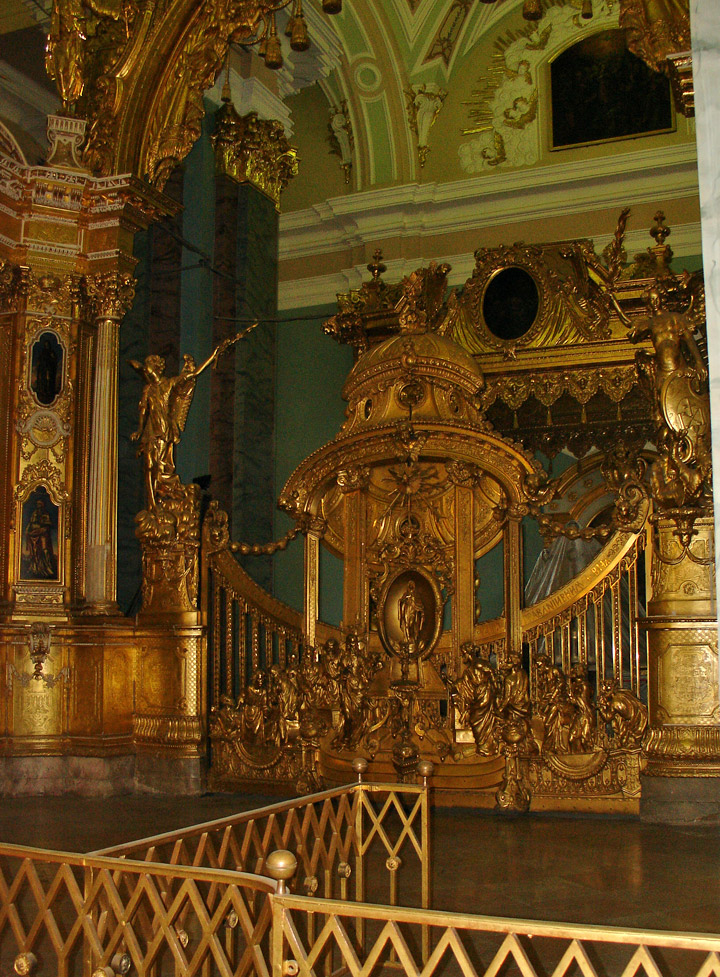 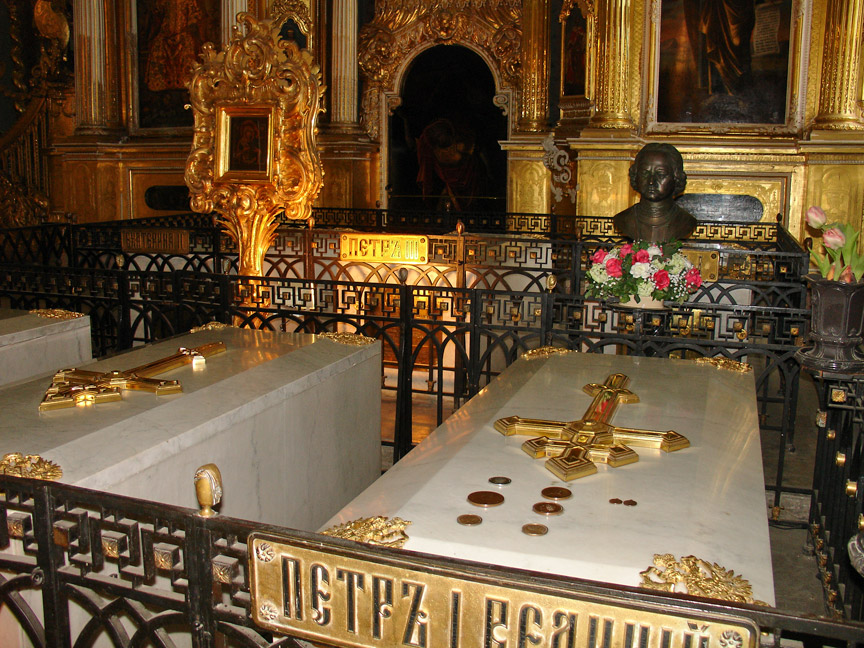 Peter's grave site is behind on the right under his bust 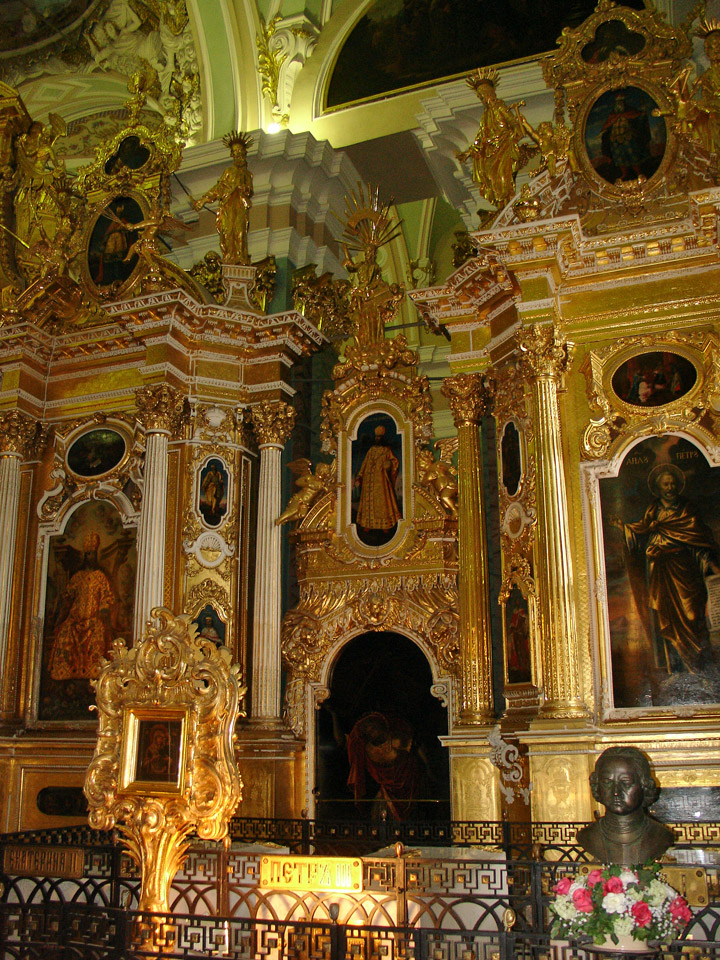 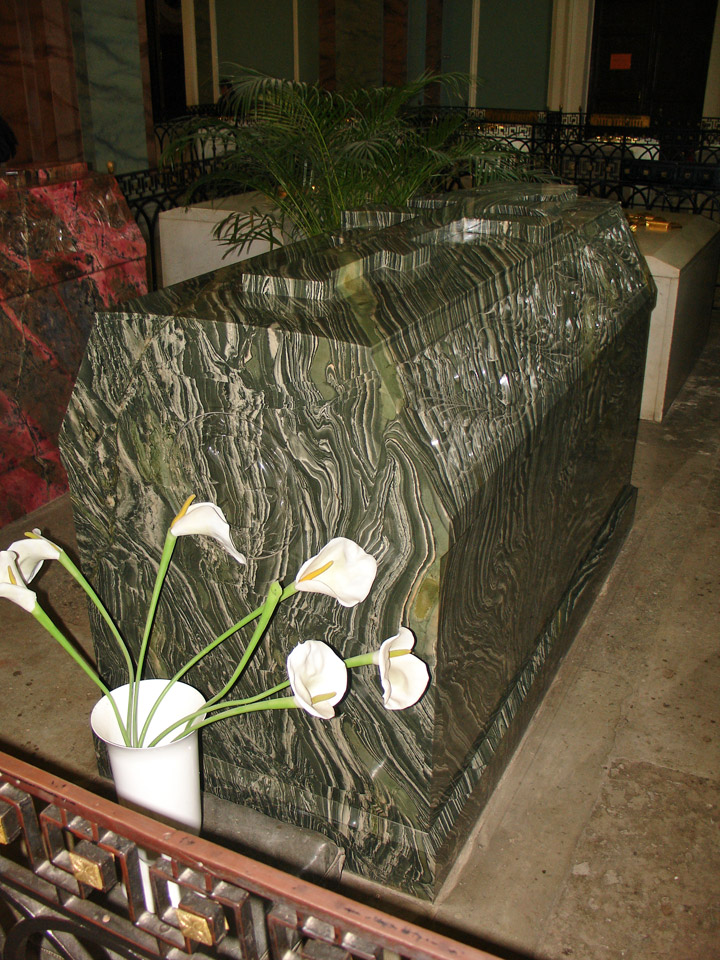 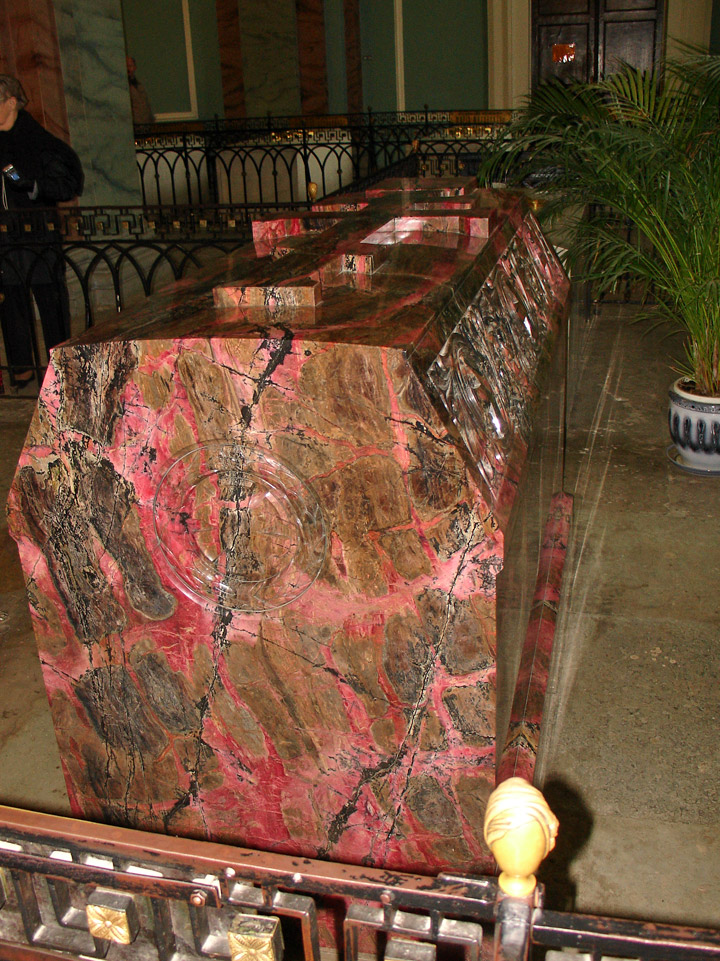 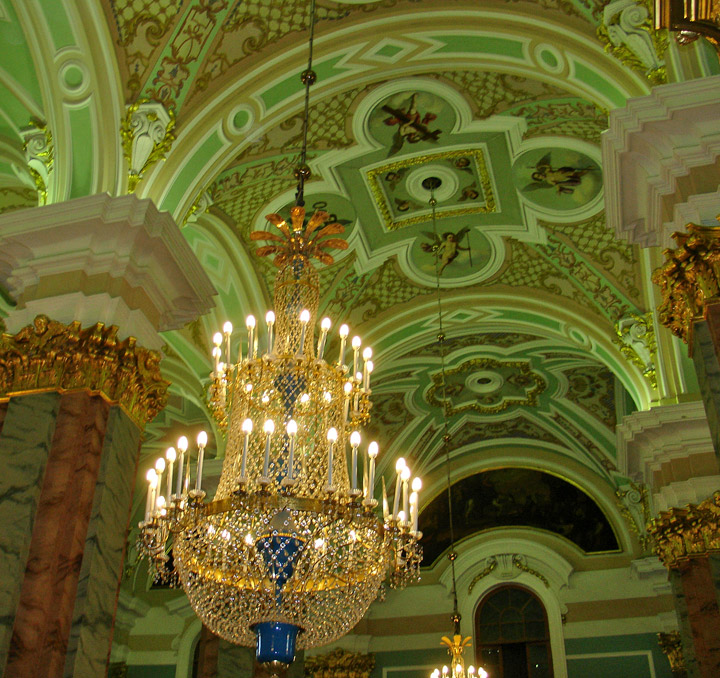 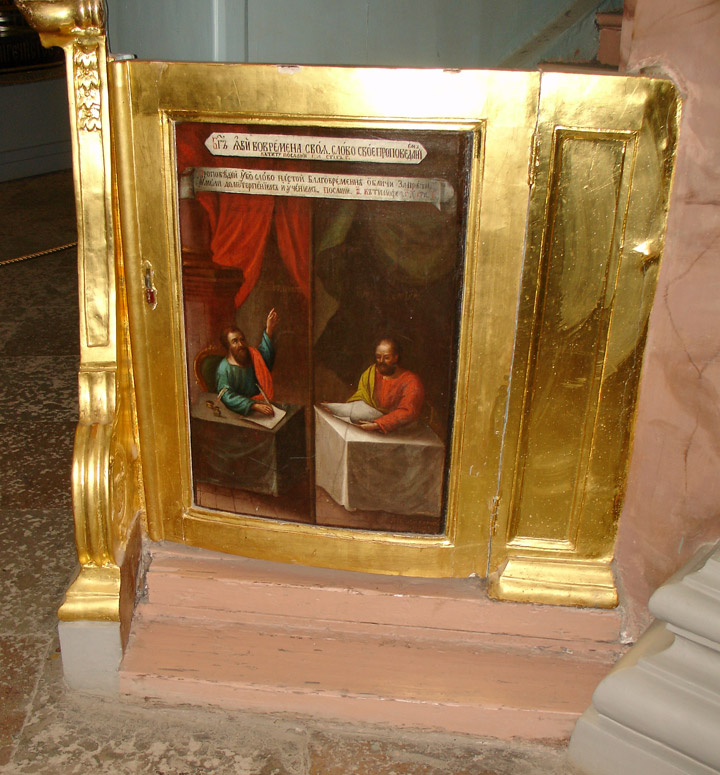 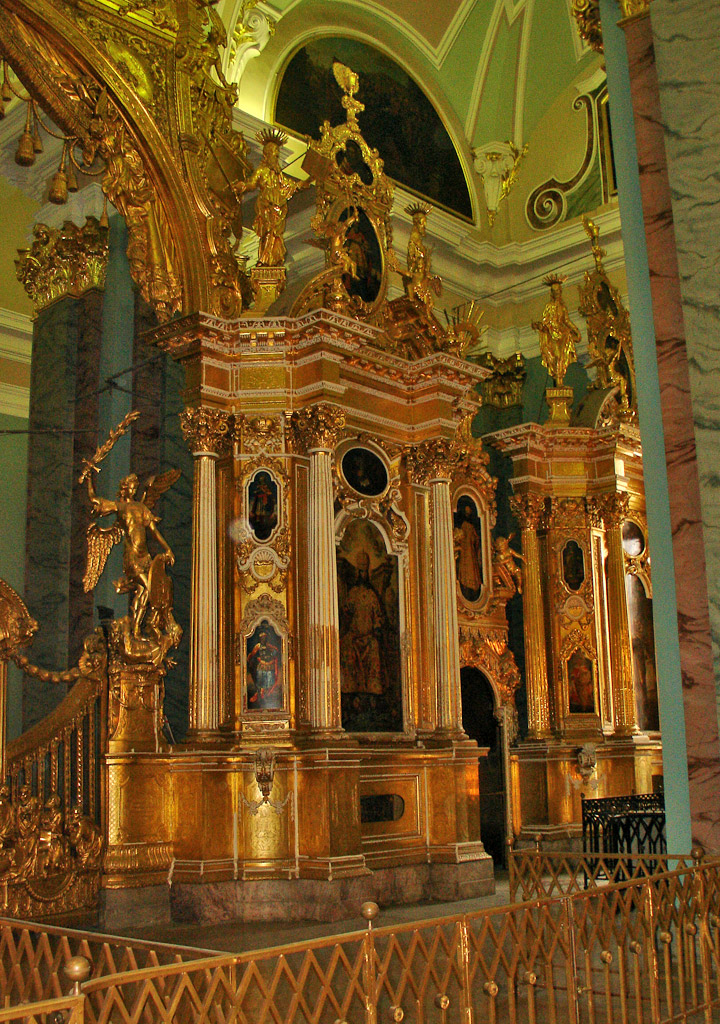 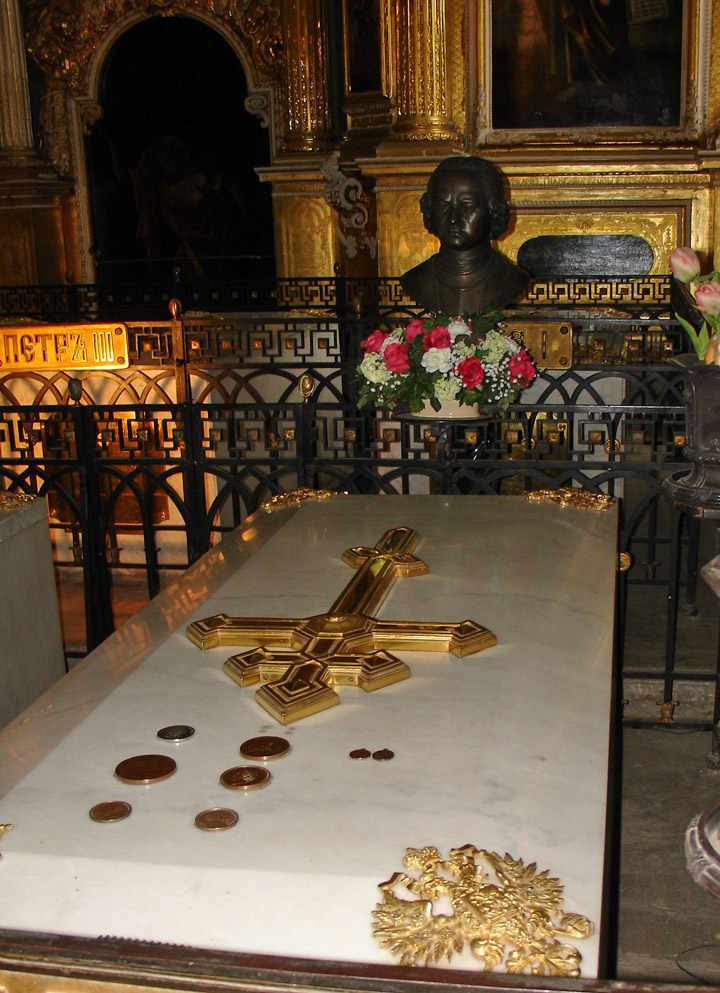 Peter the Great in the right hand corner 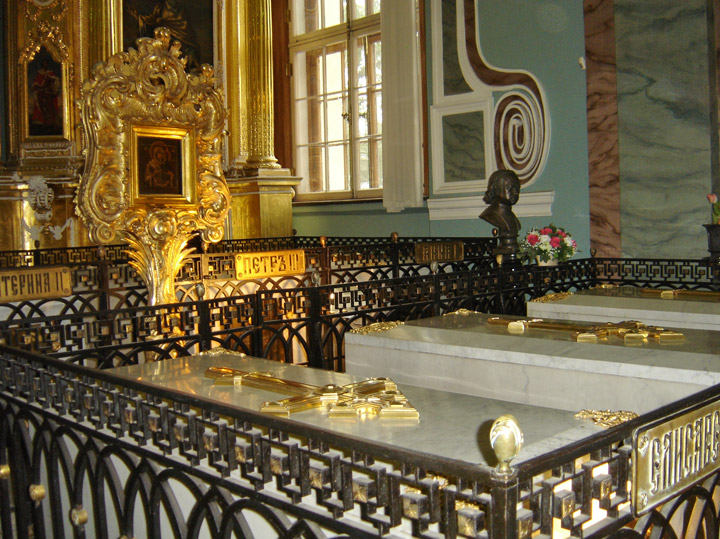 Catherine's grave is on the left in the back row 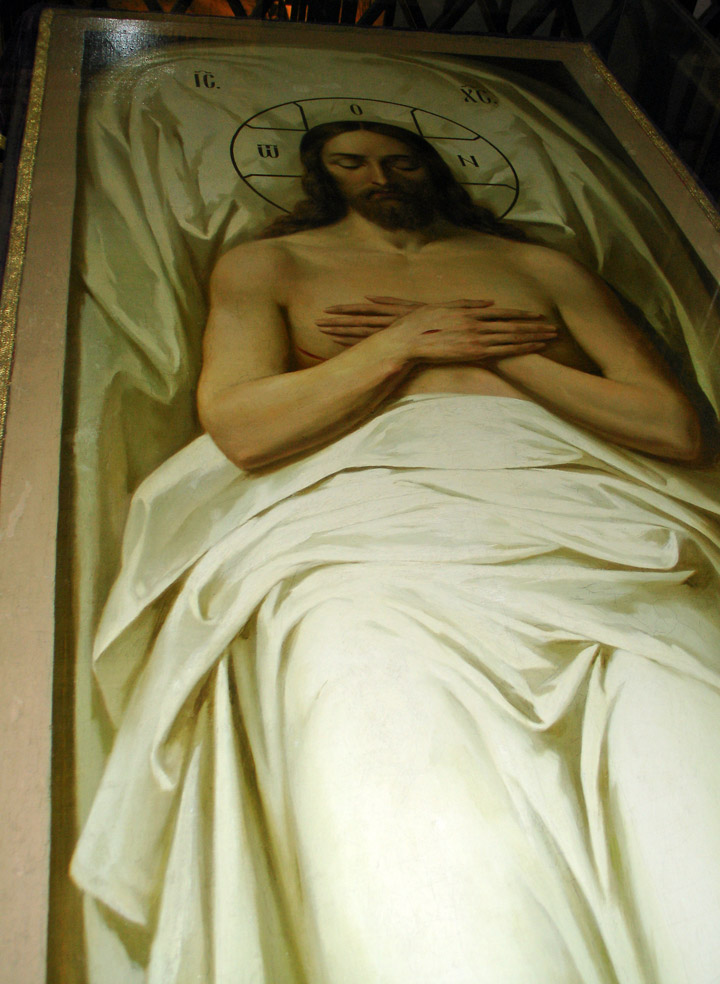 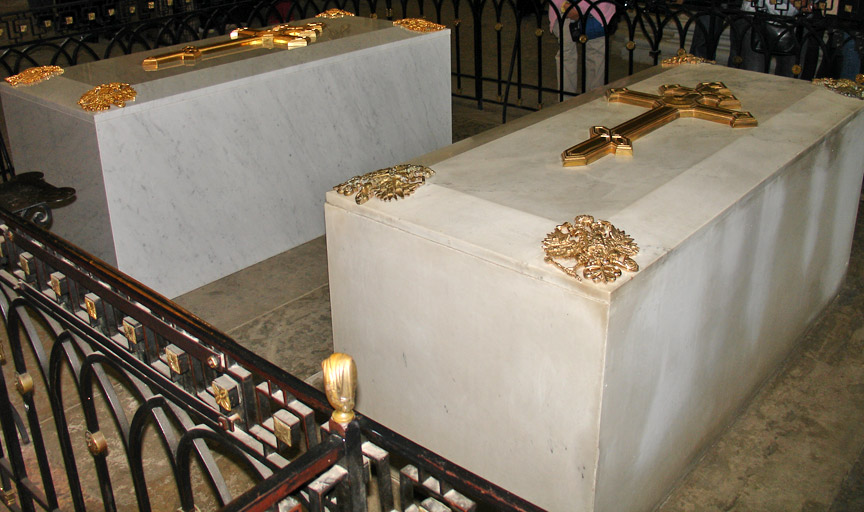 On September 28, 2006, 78 years after her death,
Maria Feodorovna, Empress of Russia, was reinterred
(on the left)
her husband, Alexander III, on the right 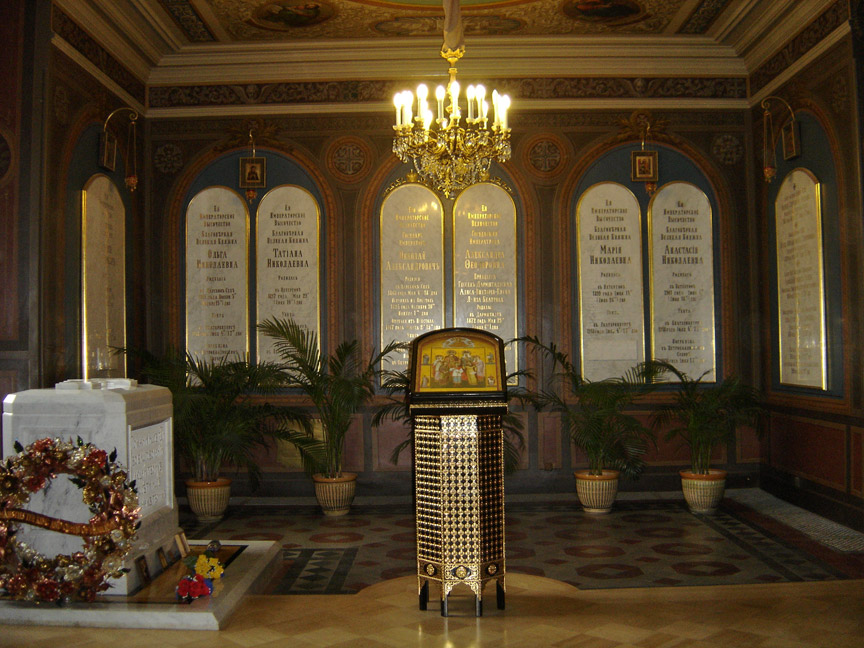 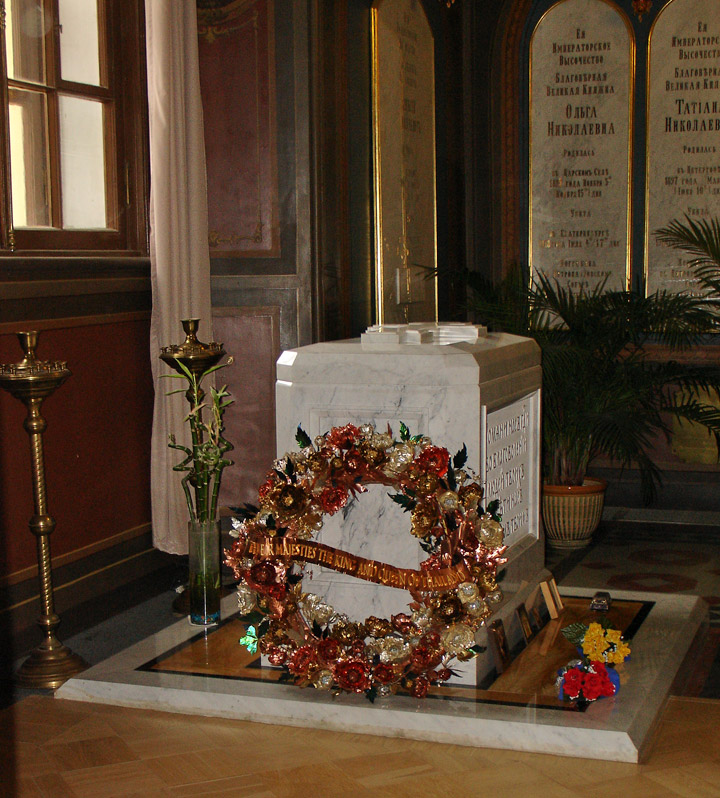 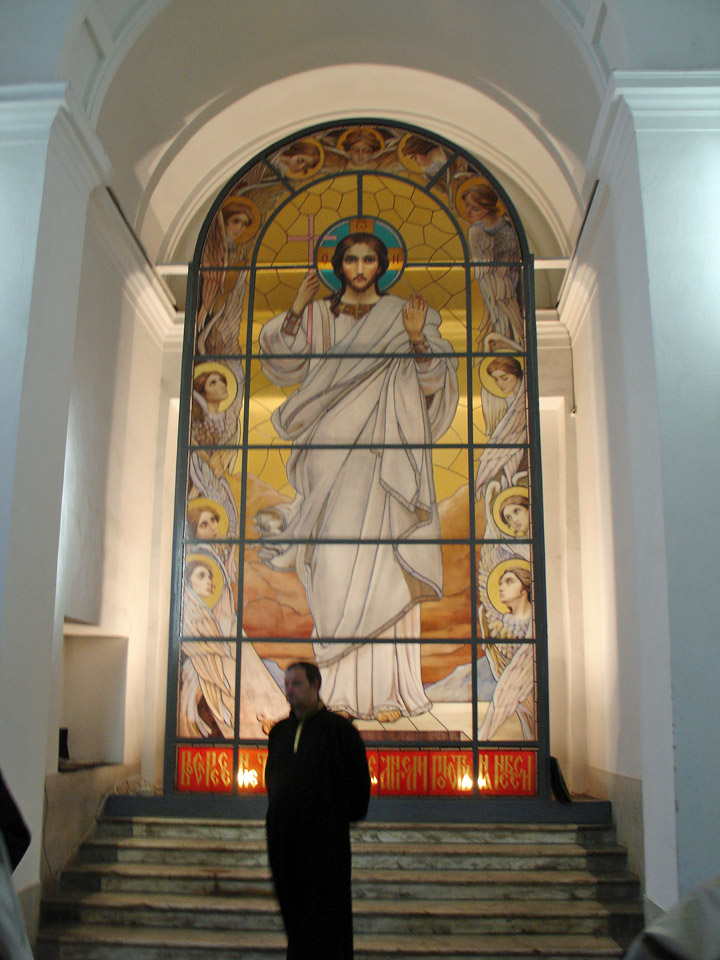 window in the side chapel 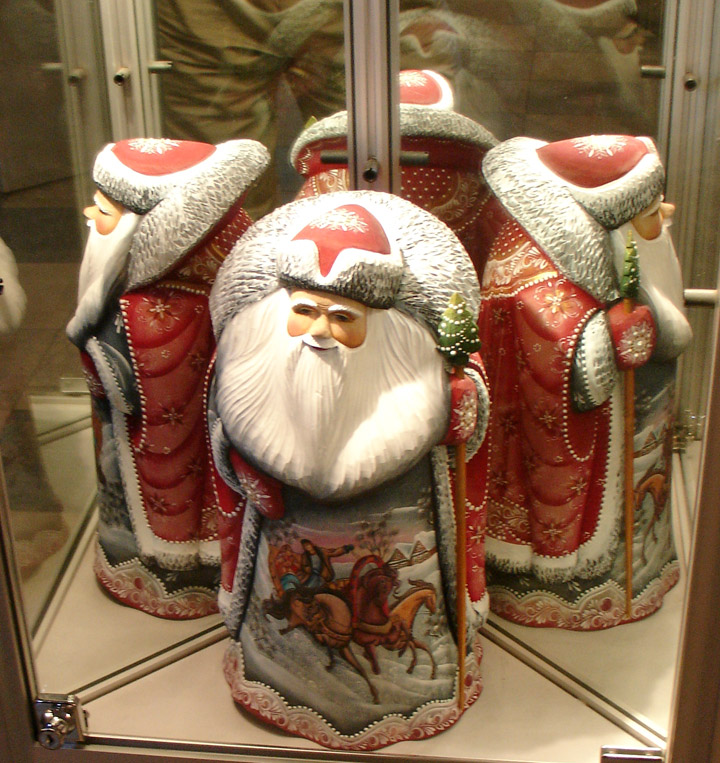 which also has a gift shop