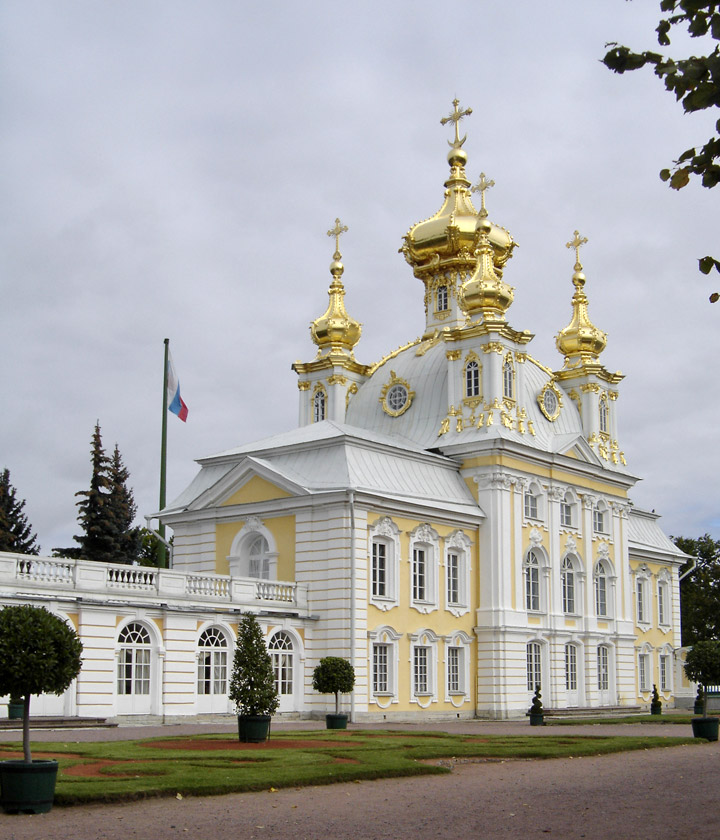 Peterhof (Russian: Петерго́ф, Petergof, originally named Peterhof which in the Germanic languages German and Dutch means "Peter's Court" is a series of palaces and gardens, laid out on the orders of Peter the Great, and sometimes called the "Russian Versailles". It is located about twenty kilometers west and six kilometers south of St. Petersburg, overlooking the Gulf of Finland, an arm of the Baltic Sea. "Peterhof" may also refer to the adjacent town of 82,000 people. The palace-ensemble along with the city center is a UNESCO World Heritage Site. 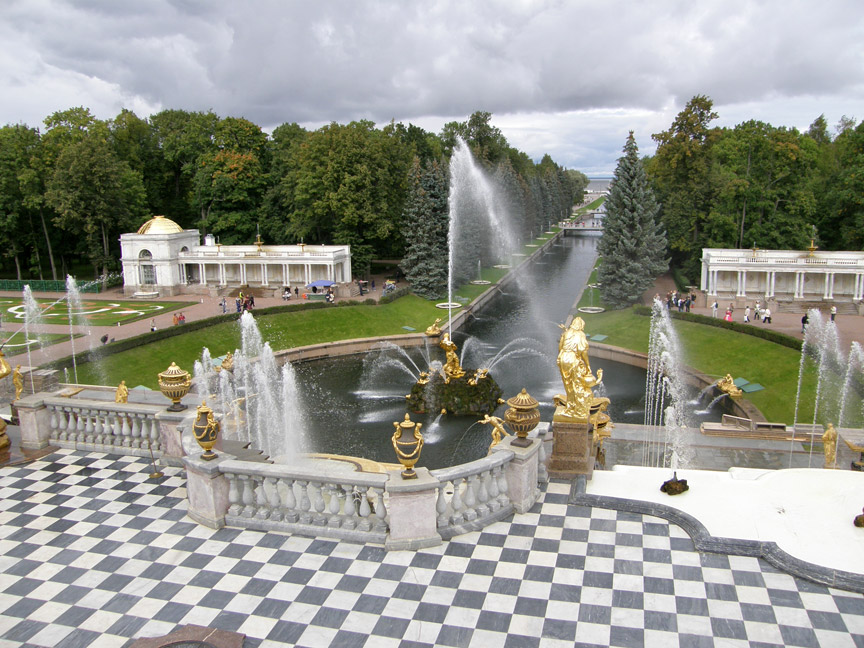 More Photos of the Fountains

The dominant natural feature of Peterhof is a sixteen-metre-high bluff lying less than a hundred metres from the shore. The so-called Lower Gardens (Nizhny Sad), at 1.02 sq km comprising the better part of Peterhof's land area, are confined between this bluff and the shore, stretching east and west for roughly 200 metres. The majority of Peterhof's fountains are contained here, as are several small palaces and outbuildings. East of the Lower Gardens lies the Alexandria Park with 19th-century Gothic Revival structures such as the Kapella. 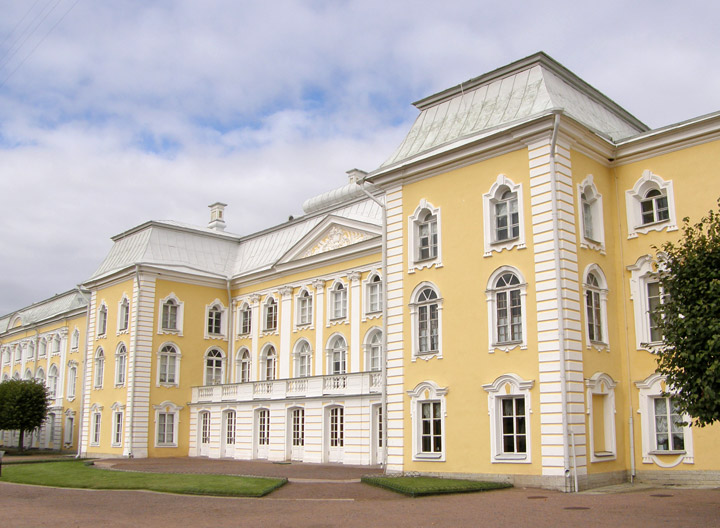 Atop the bluff, near the middle of the Lower Gardens, stands the Grand Palace (Bolshoi Dvorets). Behind (south) of it are the comparatively small Upper Gardens (Verhnyy Sad). Upon the bluff's face below the Palace is the Grand Cascade (Bolshoi Kaskad). This and the Grand Palace are the centerpiece of the entire complex. At its foot begins the Sea Channel (Morskoi Kanal), one of the most extensive waterworks of the Baroque period, which bisects the Lower Gardens. 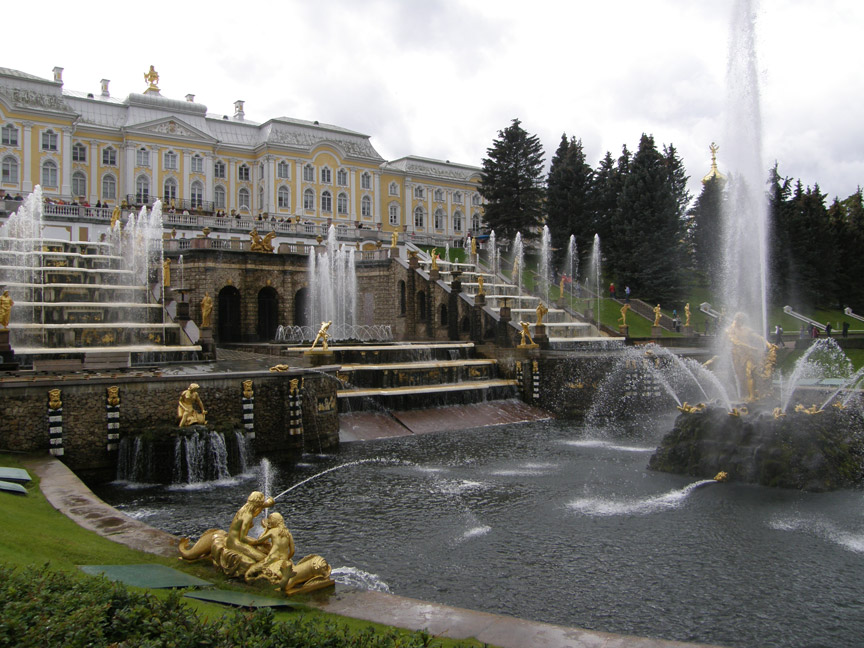 The Grand Cascade is modeled on one constructed for Louis XIV at his Château de Marly, which is likewise memorialized in one of the park's outbuildings. 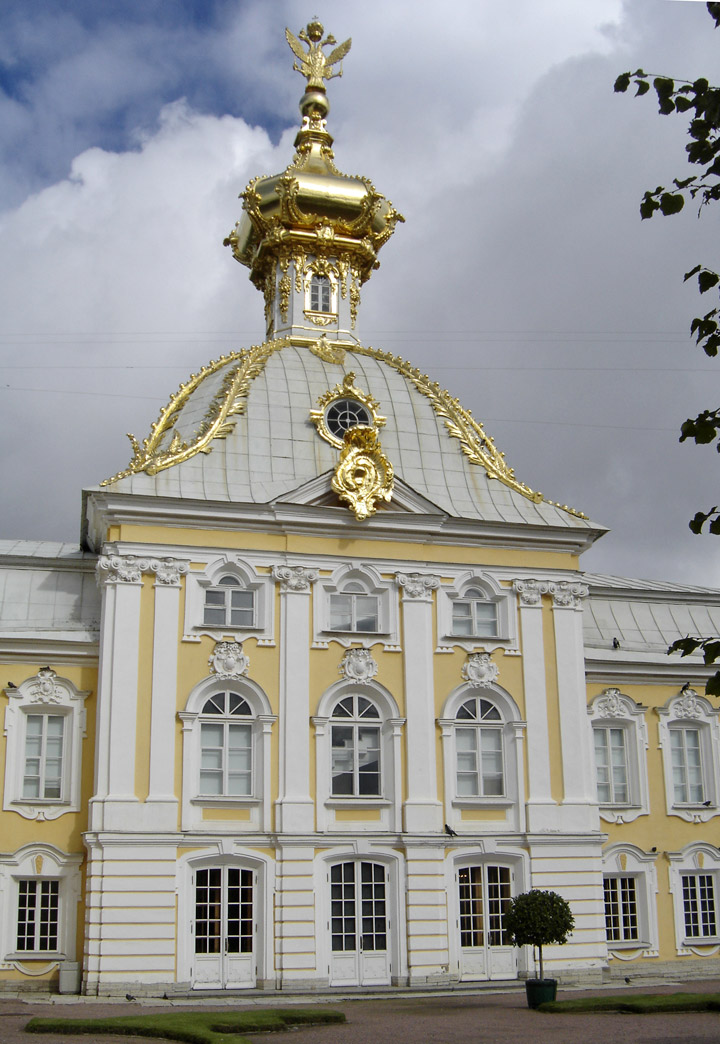 At the center of the cascade is an artificial grotto with two stories, faced inside and out with hewn brown stone. It currently contains a modest museum of the fountains' history. One of the exhibits is a table carrying a bowl of (artificial) fruit, a replica of a similar table built under Peter's direction. The table is rigged with jets of water that soak visitors when they reach for the fruit, a feature from Mannerist gardens that remained popular in Germany. The grotto is connected to the palace above and behind by a hidden corridor. 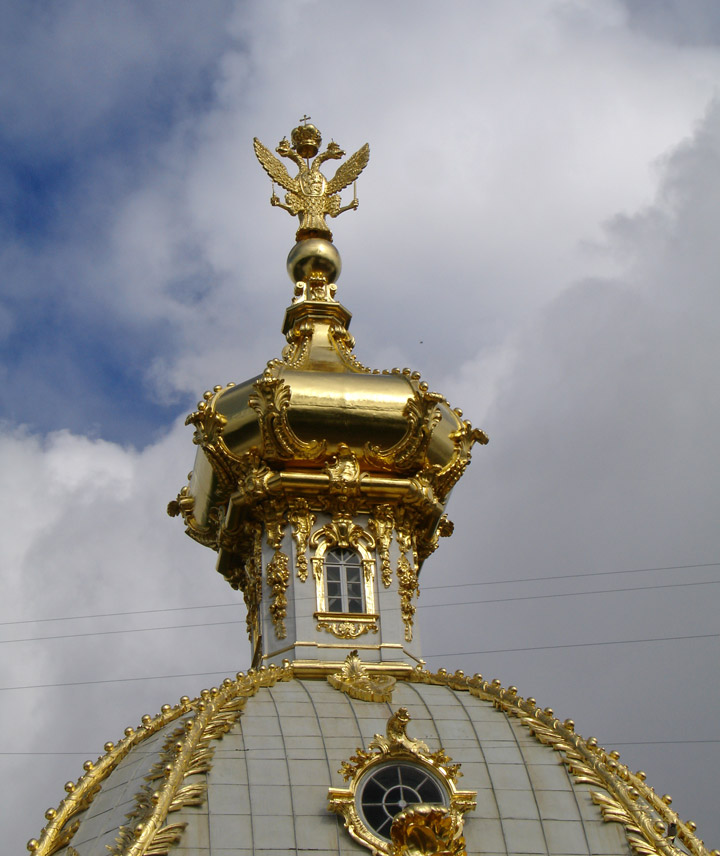 The fountains of the Grand Cascade are located below the grotto and on either side of it. Their waters flow into a semicircular pool, the terminus of the fountain-lined Sea Channel. In the 1730s, the large Samson Fountain was placed in this pool. It depicts the moment when Samson tears open the jaws of a lion, representing Russia's victory over Sweden in the Great Northern War, and is doubly symbolic. The lion is an element of the Swedish coat of arms, and one of the great victories of the war was won on St Samson's Day. From the lion's mouth shoots a 20-metre-high vertical jet of water, the highest in all of Peterhof. This masterpiece by Mikhail Kozlovsky was looted by the invading Germans during the Second World War; see "History" below. A replica of the statue was installed in 1947.7. 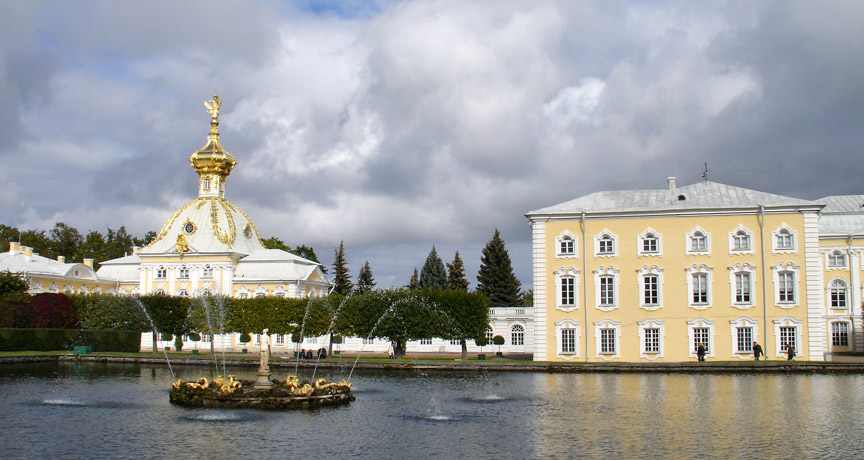 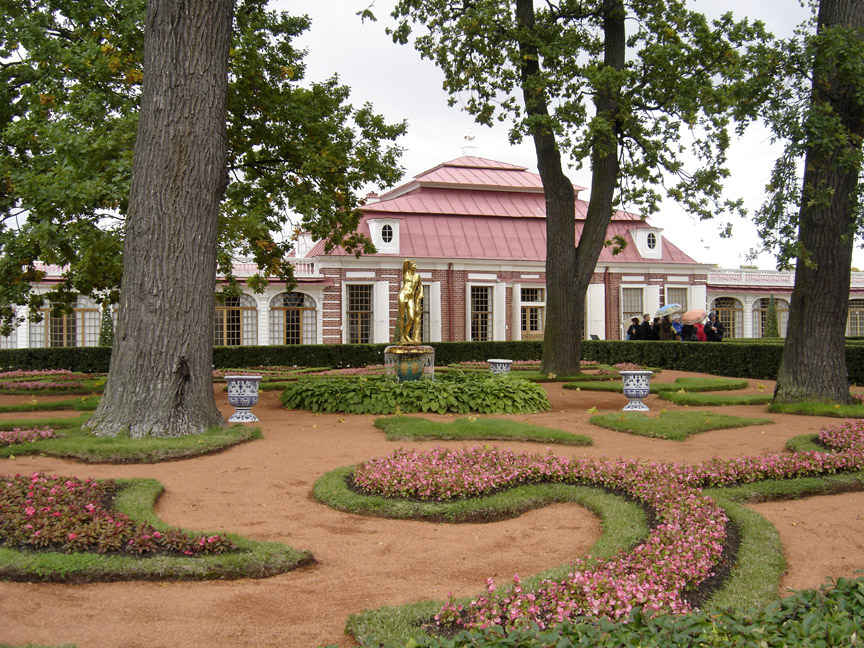 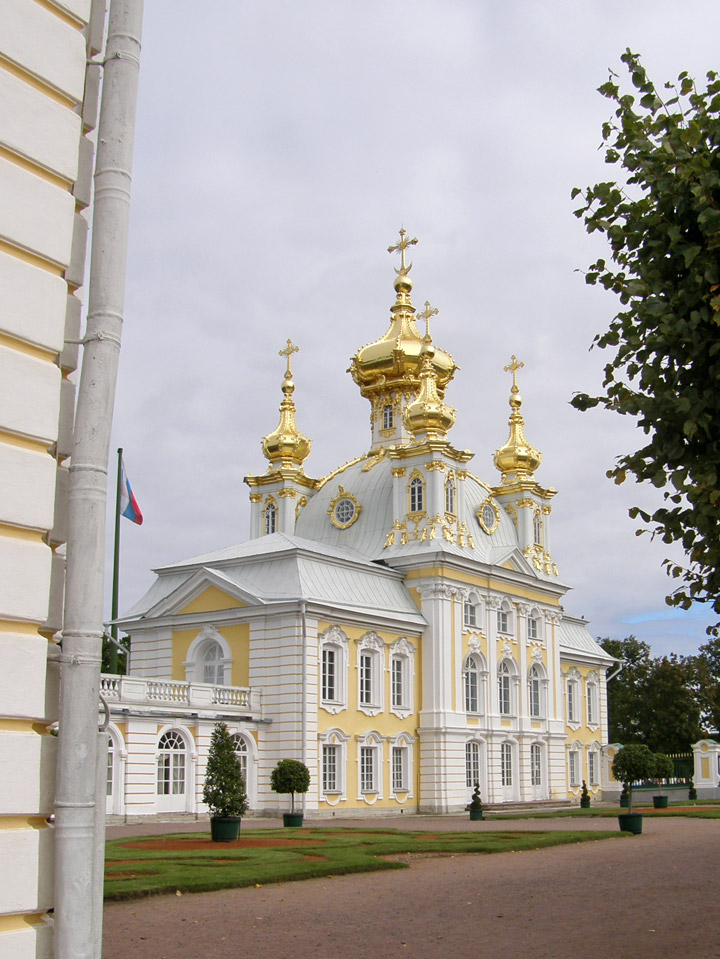 The many fountains located here exhibit an unusual degree of creativity. One of the most notable designs is entitled 'The Sun'. A disk radiating water jets from its edge creates an image of the sun's rays, and the whole structure rotates about a vertical axis so that the direction in which the "sun" faces is constantly changing. 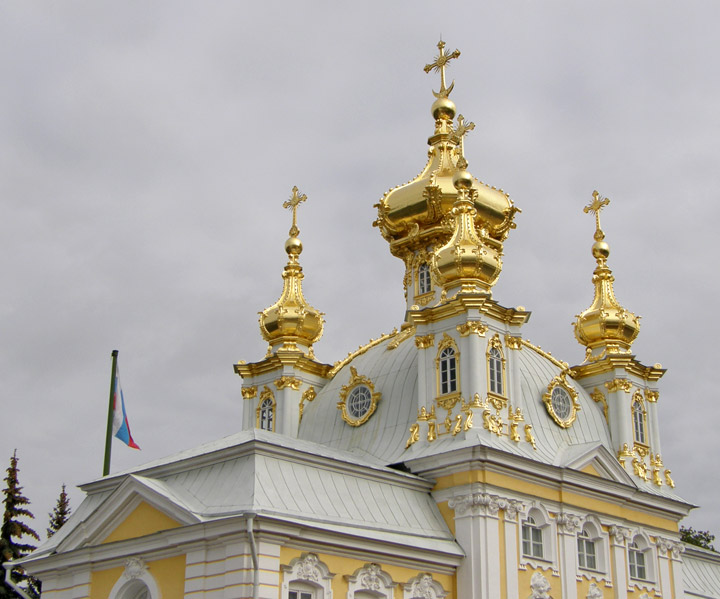 Several fountains are designed with the specific purpose of soaking visitors. Two take the form of gangly trees rigged with jets that activate when someone approaches. Another, disguised as an umbrella with a circular bench set around the stem, drops a curtain of water from its rim when someone enters to take a seat. 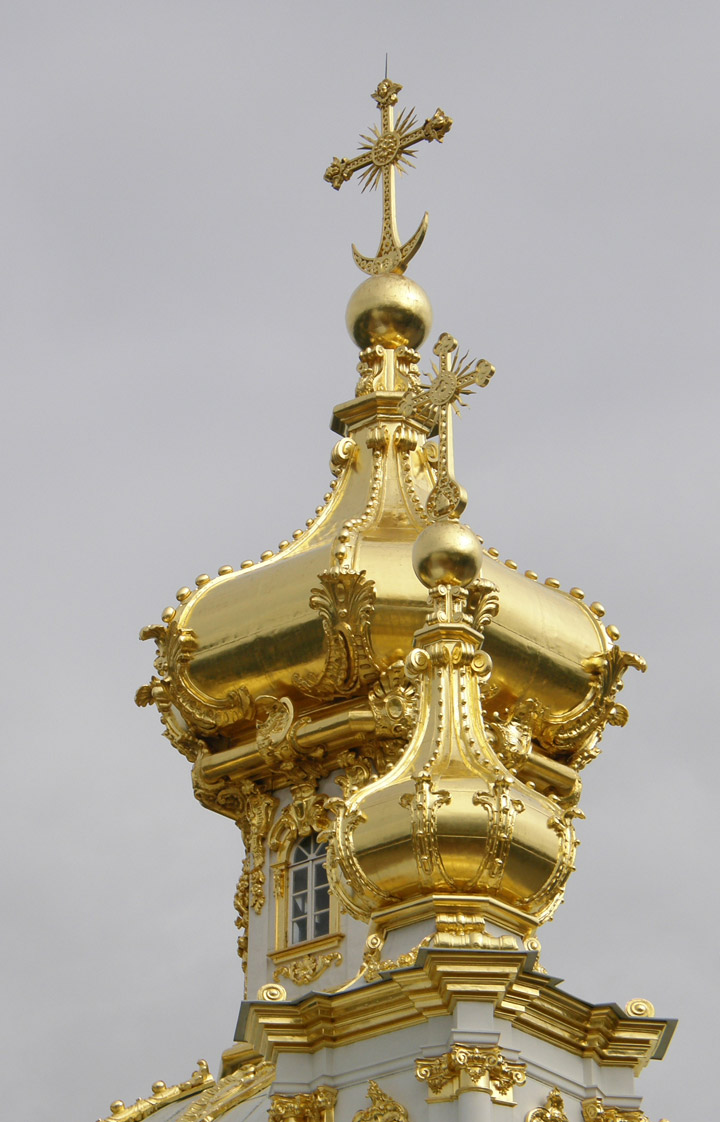 The same bluff that provides a setting for the Grand Cascade houses two other, very different cascades. West of the Grand Palace is the Golden Mountain (Zolotaia Gora), decorated with marble statuary that contrasts with the riotous gilded figures of the Grand Cascade. To the east is the Chess Mountain (Shahmatnaia Gora), a broad chute whose surface is tiled black and white like a chessboard. 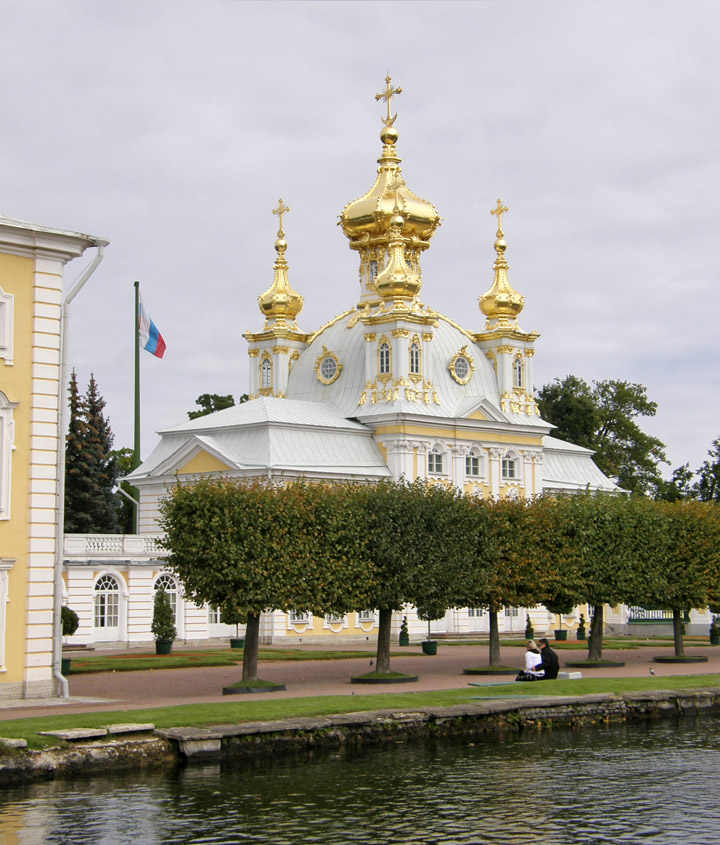 The most prominently positioned fountains of Peterhof are 'Adam' and 'Eve'. They occupy symmetric positions on either side of the Sea Channel, each at the conjunction of eight paths. 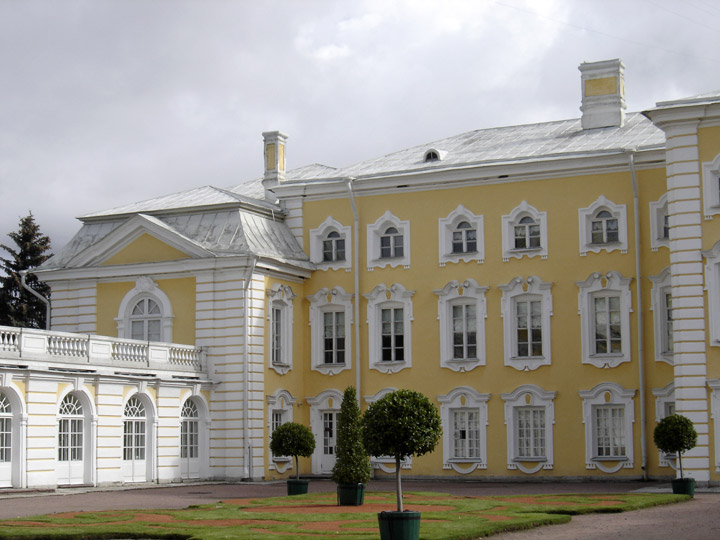 The largest of Peterhof's palaces looks truly imposing when seen from the Lower or Upper Gardens, but in fact it is quite narrow and not overly large. Of its approximately thirty rooms, several deserve mention.ion. 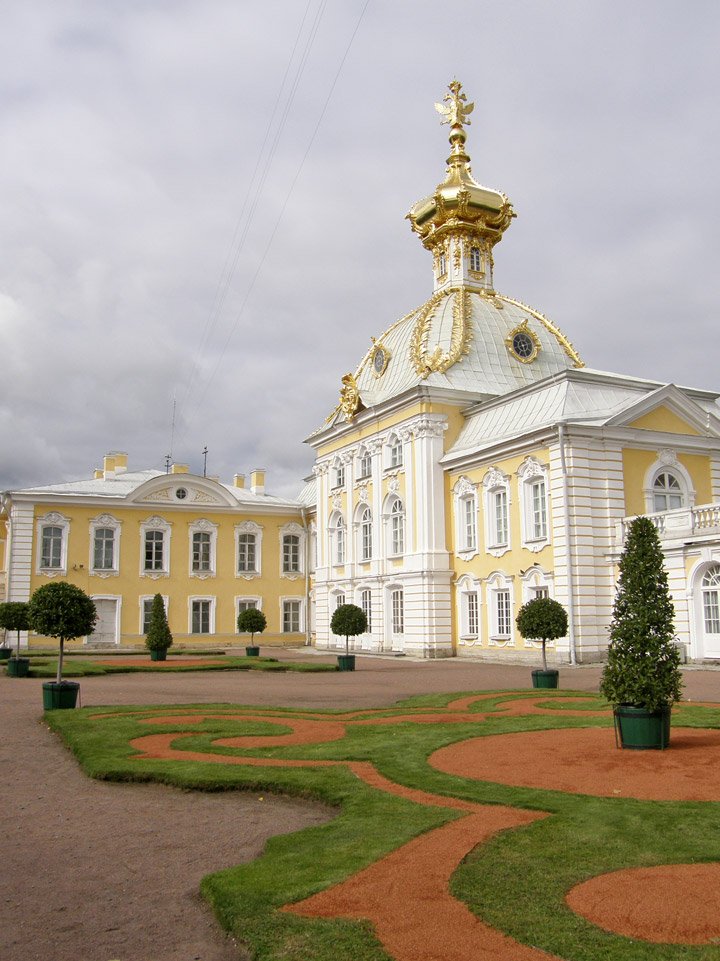 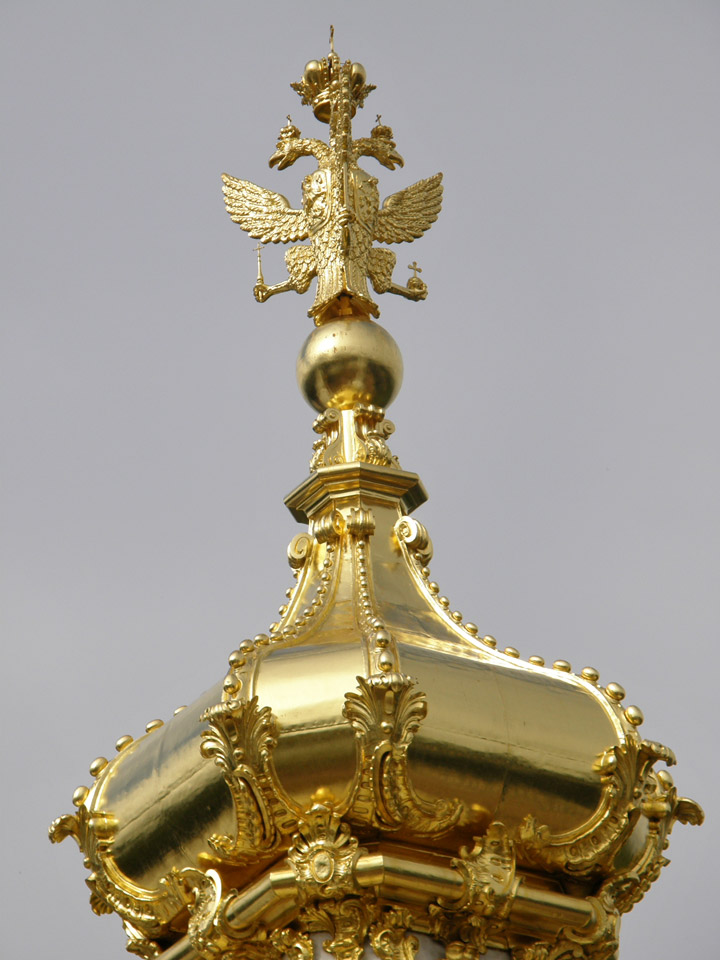 The East and West Chinese Cabinets were decorated between 1766 and 1769 to exhibit objects of decorative art imported from the East. The walls were decorated with imitation Oriental patterns by Russian craftsmen, and hung with Chinese landscape paintings in yellow and black lacquer.uer. 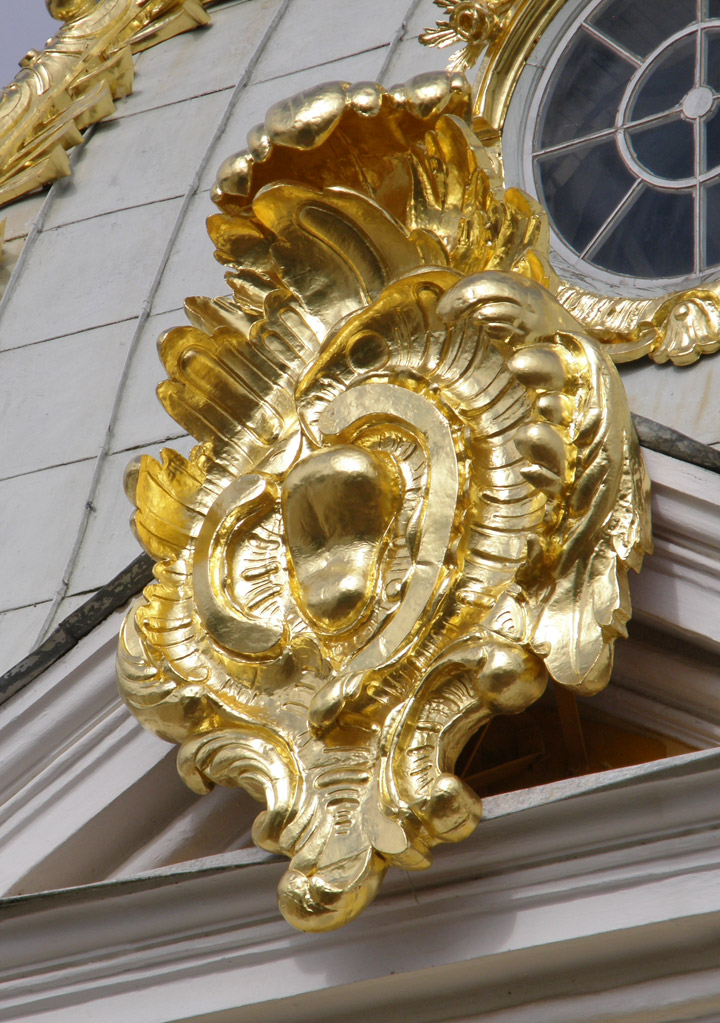 Another room, positioned at the center of the palace, bears the name of the Picture Hall. Its walls are almost entirely covered by a series of 368 paintings, mostly of variously dressed women, differing in appearance and even age, yet most were drawn from a single model. These were purchased in 1764 from the widow of the Italian artist P. Rotari, who died in St. Petersburg. 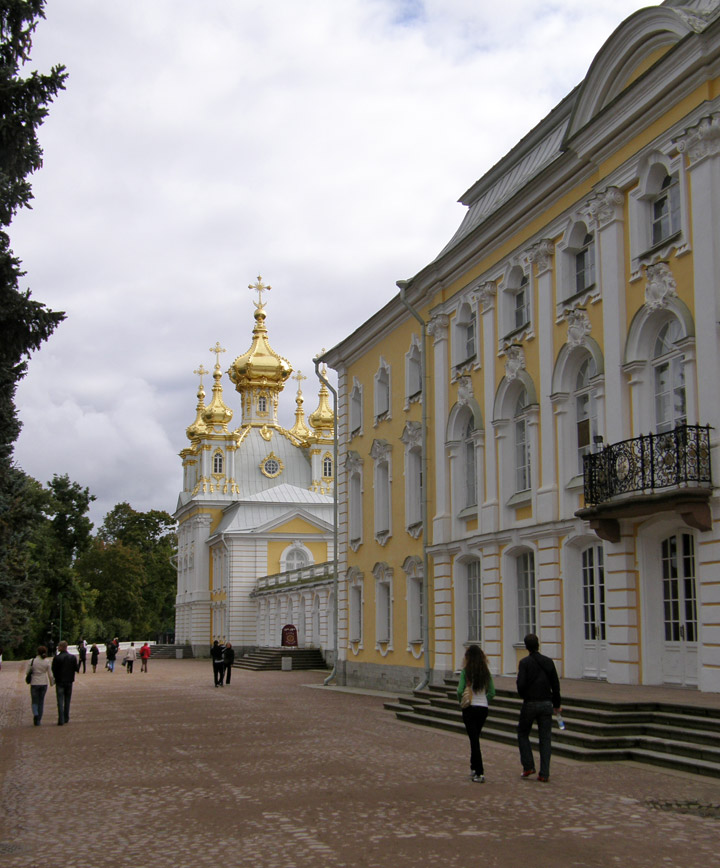 The Grand Palace is not the only historic royal building in Peterhof. The palaces of Monplaisir and Marly, as well as the pavilion known as the 'Hermitage', were all raised during the initial construction of Peterhof during the reign of Peter the Great. The Lower Gardens also contain a large greenhouse, and in the Alexandrine Park stands the palace of Nicholas I. 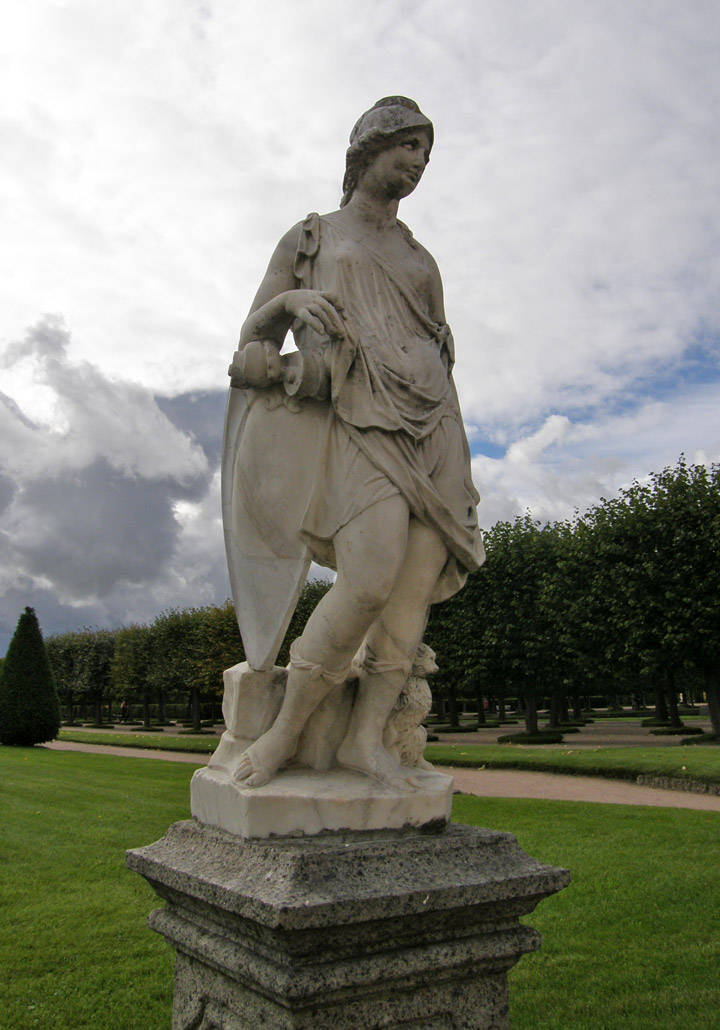 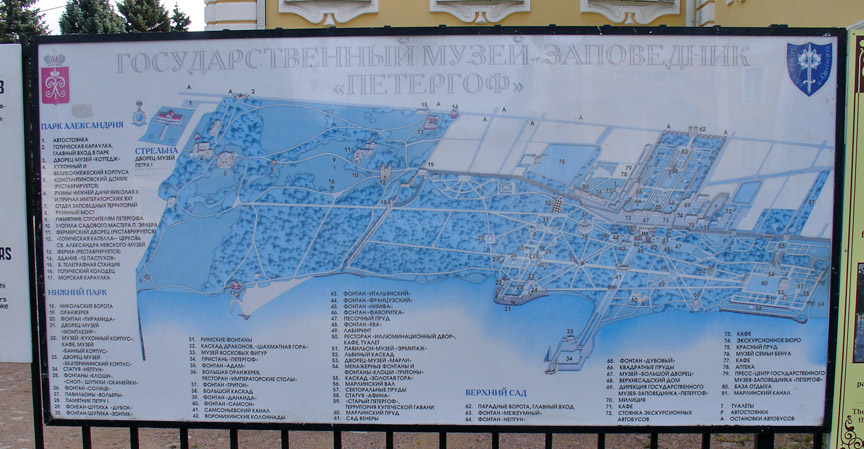 map of the grounds

In the time of Peter the Great, the sea floor just north of the Peterhof site and to the east toward St. Petersburg was too shallow for either commercial ships or warships. However, to the west of Peterhof, the sea floor dropped off to be deep enough for sea-going vessels. Accordingly, when Peter the Great decided to build St. Petersburg at the eastern end of the Gulf of Finland, he first captured the Kotlin Island clearly visible from the Peterhof site just to the northeast in the middle of the Gulf. At Kotlin Island he would build the commercial harbor for St. Petersburg as well as the Kronstadt fortifications across the 20 kilometers of shallow sea to provision and defend the Navy that he would build. 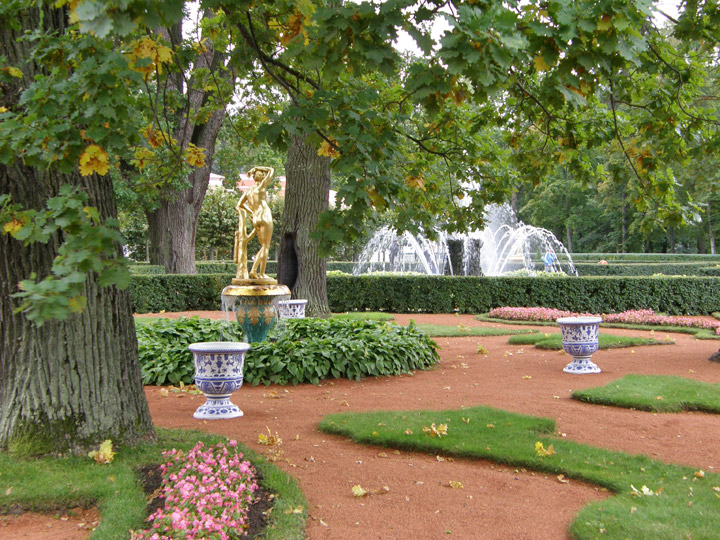 Peter the Great first mentions the Peterhof site in his journal in 1705, during the Great Northern War, as a good place to construct a landing for use in traveling to and from the island fortress of Kronstadt. And in 1714, Peter began construction of the Monplaisir ("my pleasure") Palace based on his own sketches of the palace that he wanted close to the shoreline. This was Peter's Summer Palace that he would use on his way coming and going from Europe through the harbor at Kronstadt. On the walls of this seacoast palace hung hundreds of paintings that Peter brought from Europe and allowed to weather Russian winters without heat together with the dampness of being so close to the sea. [12] And in the seaward corner of his Monplaisir Palace, Peter made his Maritime Study from which he could see Kronstadt Island to the left and St. Petersburg to the right. [13] Later, he expanded his plans to include a vaster royal château of palaces and gardens further inland, on the model of Versailles. Each of the tsars after Peter expanded on the inland palaces and gardens of Peterhof, but the major contributions by Peter the Great were completed by 1725. Peter had also entertained plans of a similar palace at Strelna, a short way to the east, but these plans were abandoned. 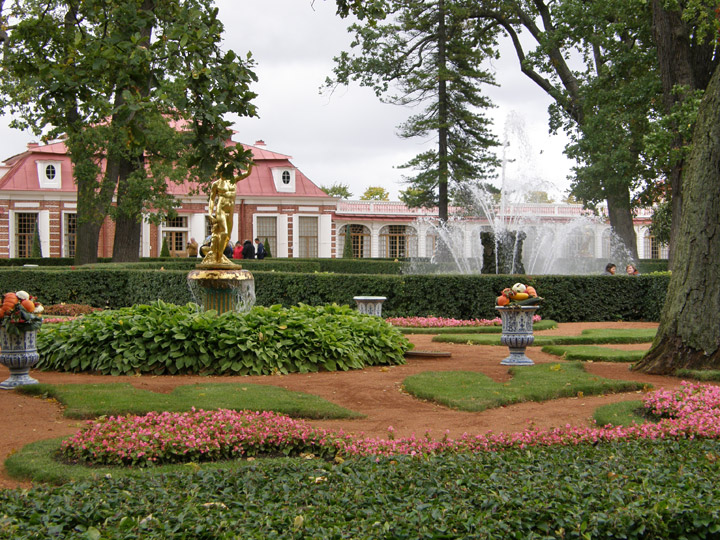 Peterhof originally appeared quite differently than it does today. Many of the fountains had not yet been installed. The entire Alexandrine Park and Upper Gardens didn't exist. (The latter was used to grow vegetables, and its ponds, then numbering only three, for fish.) The Samson Fountain and its massive pedestal had not yet been installed in the Sea Channel, and the channel itself was used as a grand marine entrance into the complex. 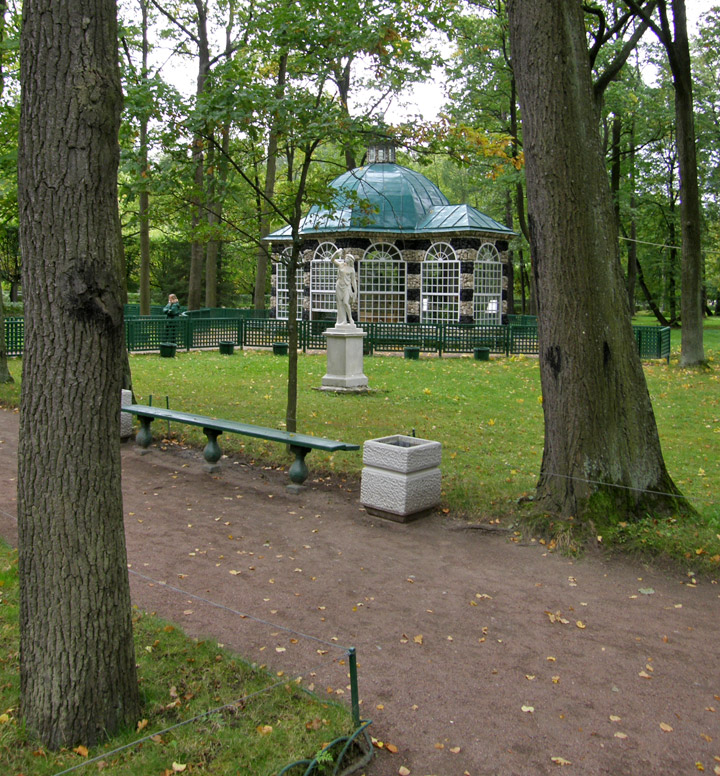 Perhaps the most important change augmenting Peter's design was the elevation of the Grand Palace to central status and prominence. The Grand Palace was originally called simply 'Upper', and was hardly larger than any of the other structures of the complex. The addition of wings, undertaken between 1745 and 1755, was one of the many projects commissioned from the Italian architect Bartolomeo Rastrelli by Elizabeth of Russia. Likewise, the Grand Cascade was more sparsely decorated when initially built. 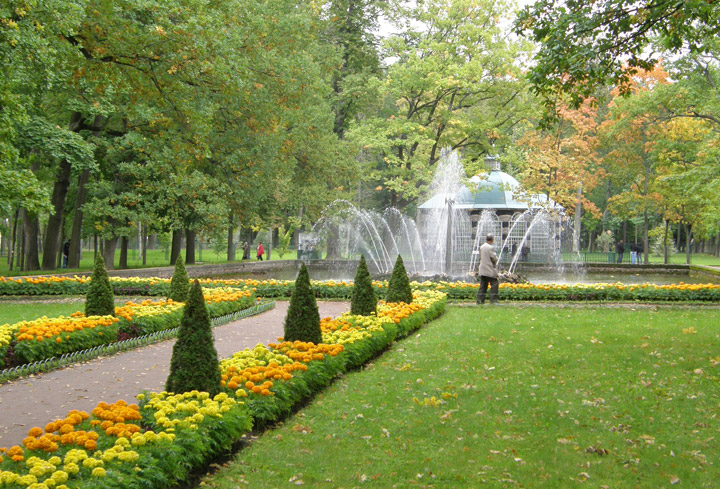 The augmentation of Peterhof's original fountains and the addition of new ones continued well into the 19th century. 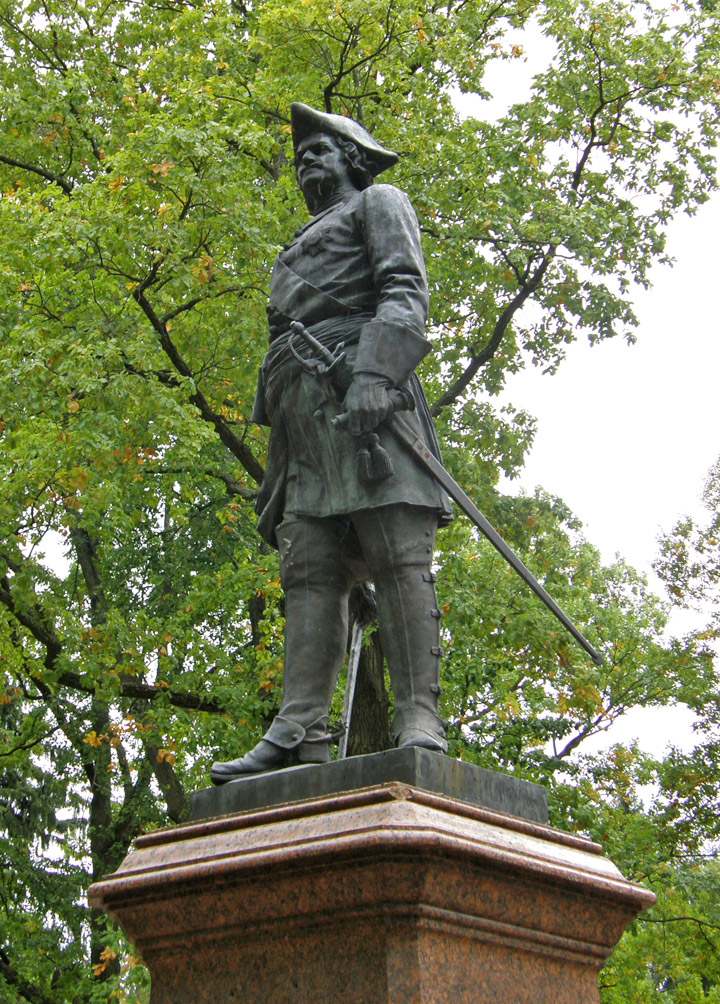 Peterhof, like Tsarskoye Selo, was captured by German troops in 1941 and held until 1944. In the few months that elapsed between the outbreak of war in the west and the appearance of the German Army, employees were only able to save a portion of the treasures of the palaces and fountains. An attempt was made to dismantle and bury the fountain sculptures, but three-quarters, including all of the largest ones, remained in place. The occupying forces of the German Army largely destroyed[citation needed] Peterhof, particularly out of spite[citation needed] after the breaking of the siege of Leningrad. Many of the fountains were destroyed, and the palace was partially exploded and left to burn. Restoration work began almost immediately after the end of the war and continues to this day. It progressed remarkably quickly, and is still being carried out. 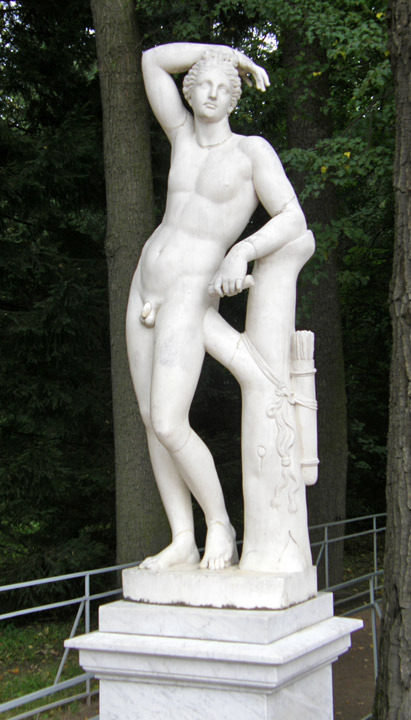 The name was changed to 'Petrodvoréts' ("Peter's Palace") in 1944 as a result of wartime anti-German sentiment and propaganda, but the original name was restored in 1997 by the post-Soviet government of Russia. 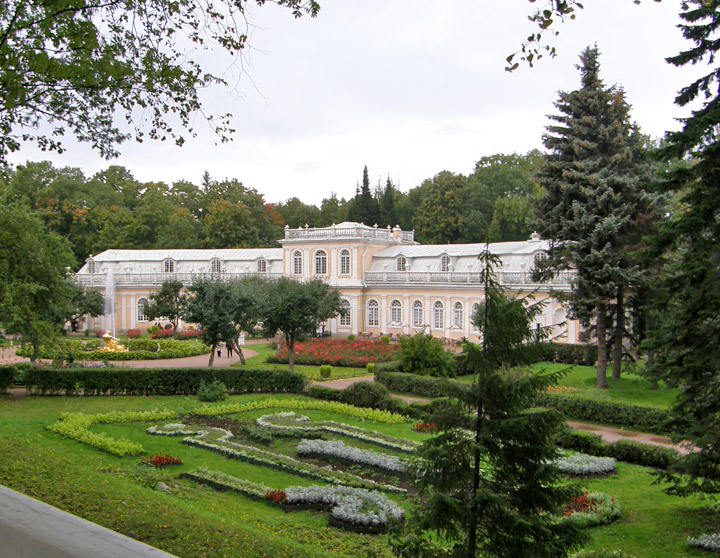 In 2003, St Petersburg celebrated its 300th anniversary. As a result, much of the building and statuary in Peterhof has been restored and new gilt-work abounds.