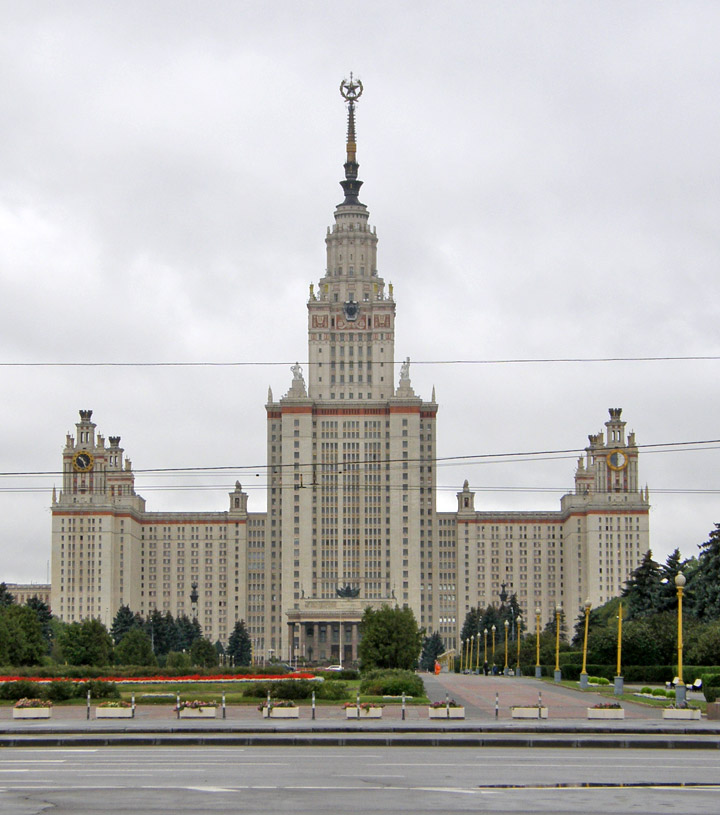 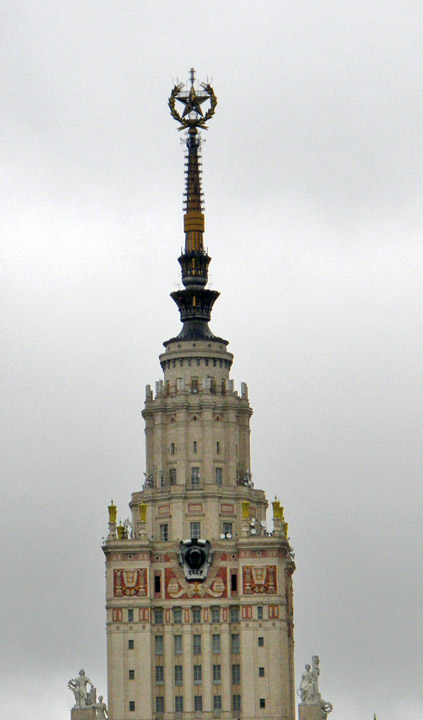 Moscow (Moskva) (Russian: Москва́) is the capital of Russia and the country's economic, financial, educational, and transportation centre. It is located on the Moskva River in the Central Federal District, in the European part of Russia. Moscow (Moskva) is the most populous city in Europe, whose population constitutes about 7% of the total Russian population.  Historically, it was the capital of the former Soviet Union and the Grand Duchy of Moscow, the pre-Imperial Russian state. It is the site of the Kremlin, which now serves as the ceremonial residence of the President of Russia. 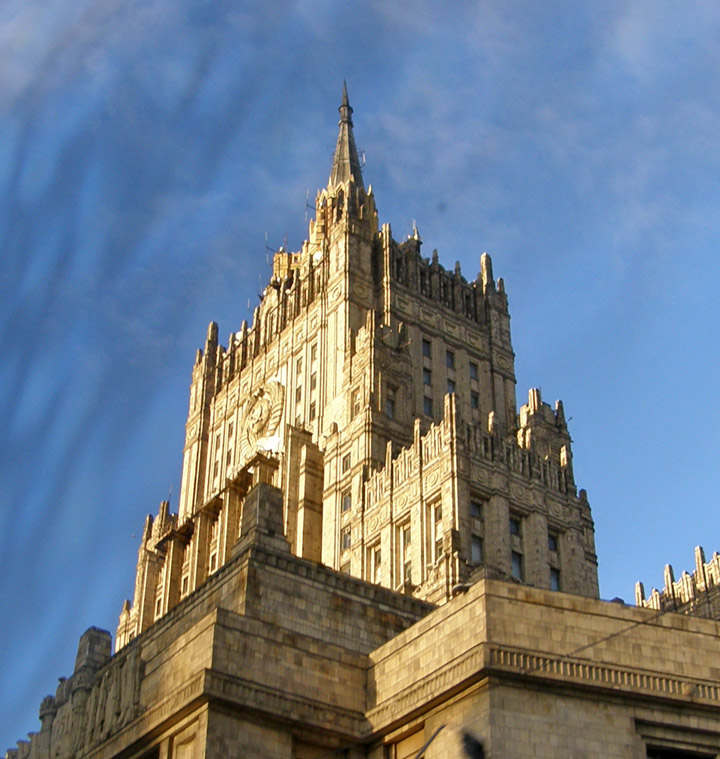 Moscow also remains a major economic centre and is home to a large number of Russian billionaires; it was recently named as the most expensive city in the world for expatriate employees. It is home to many scientific and educational institutions, as well as numerous sport facilities. It possesses a complex transport system that includes the world's busiest metro system, which is famous for its architecture. 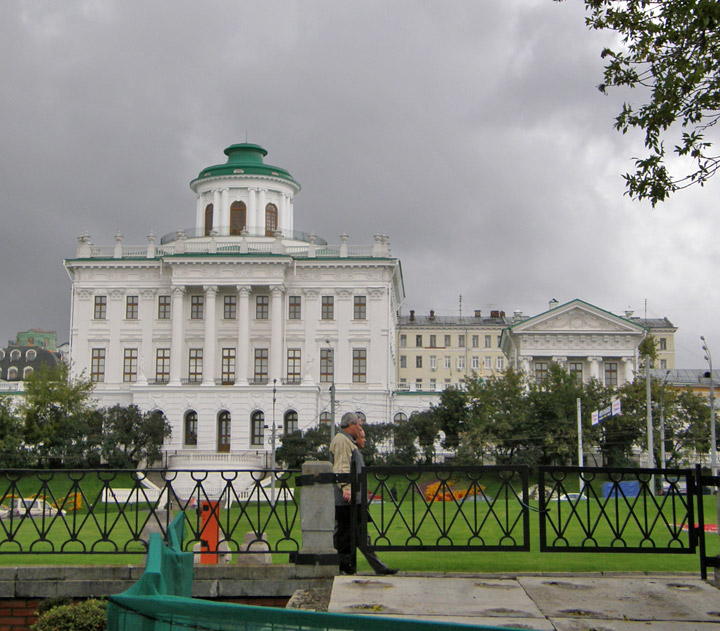 Library near the Kremlin 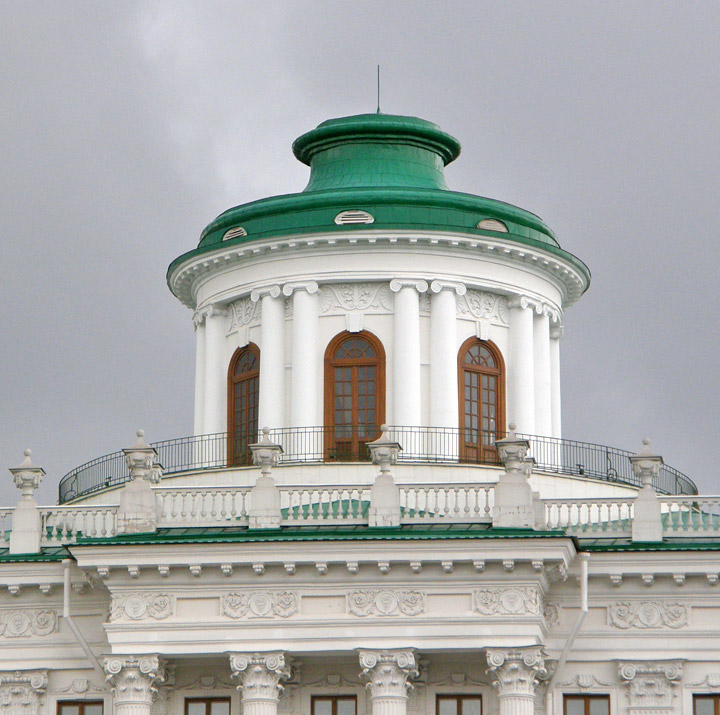 The city is named after the river (old Russian: гра́д Моско́в, literally the city by the Moskva River). The origin of the name is unknown, although several theories exist. One theory suggests that the source of the name is an ancient Finnic language, in which it means "dark" and "turbid". 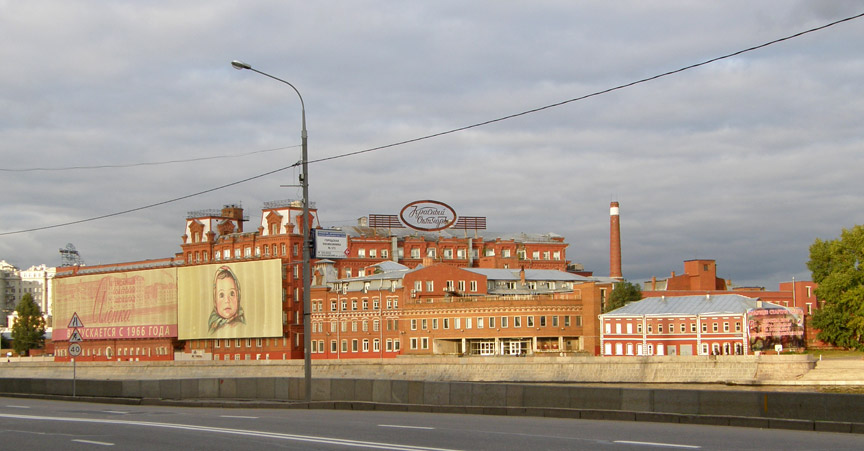 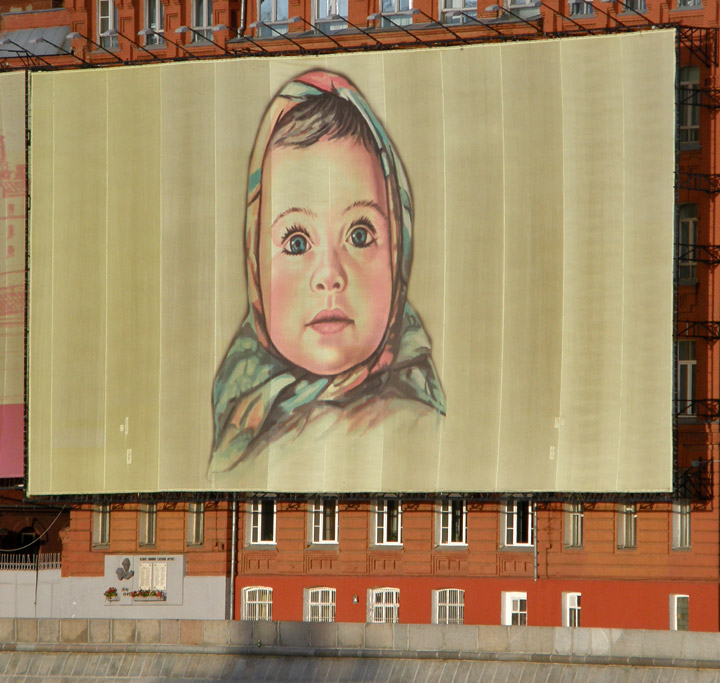 The first Russian reference to Moscow dates from 1147 when Yuri Dolgoruki called upon the prince of the Novgorod Republic to "come to me, brother, to Moscow." Nine years later, in 1156, Prince Yuri Dolgoruki of Rostov ordered the construction of a wooden wall, which had to be rebuilt multiple times, to surround the emerging city. After the sacking of 1237-1238, when the Mongol-Tatars burned the city to the ground and killed its inhabitants, Moscow recovered and became the capital of an independent principality in 1327. Its favorable position on the headwaters of the Volga River contributed to steady expansion. Moscow developed into a stable and prosperous principality for many years and attracted a large number of refugees from across Russia. 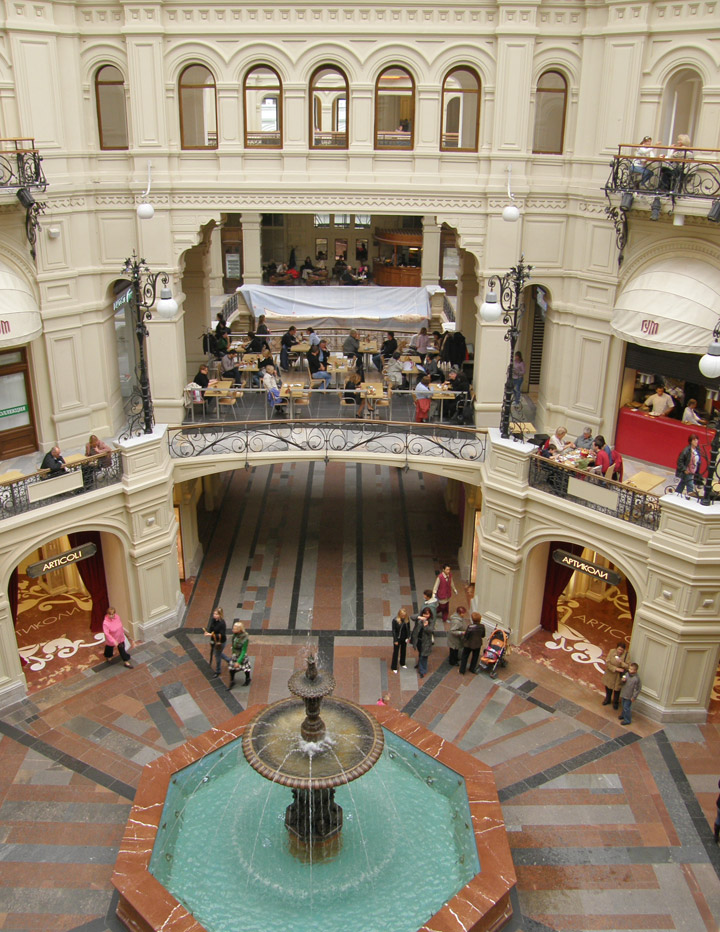 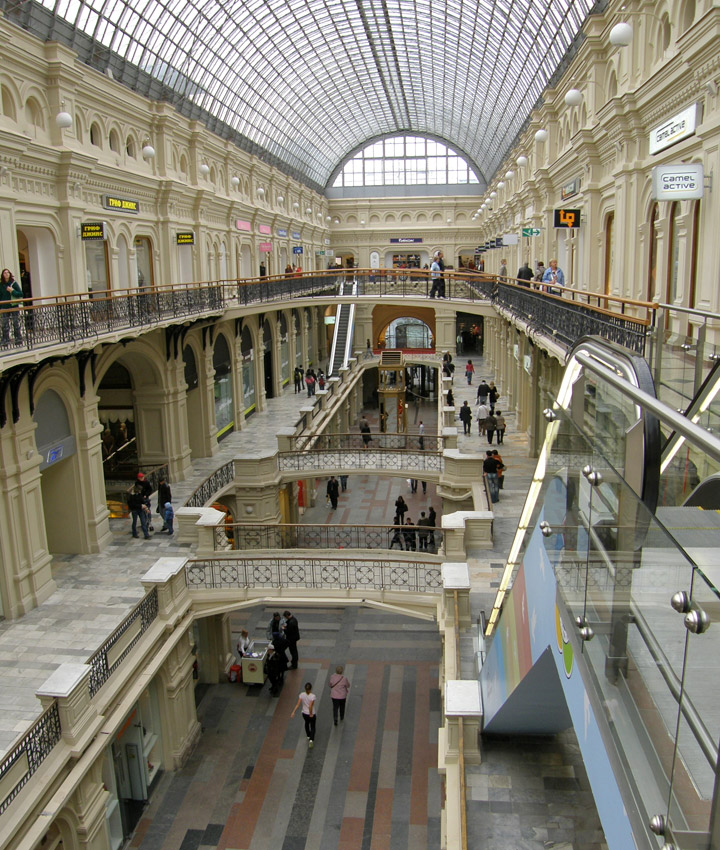 Under Ivan I the city replaced Tver as capital of Vladimir-Suzdal and became the sole collector of taxes for the Mongol-Tatar rulers. By paying high tribute, Ivan won an important concession from the Khan. Unlike other principalities, Moscow was not divided among his sons but was passed intact to his eldest. In 1380, prince Dmitri Donskoi of Moscow led a united Russian army to an important victory over the Tatars in the Battle of Kulikovo. Although this victory is regarded as important its result was somewhat exaggerated; the battle wasn't decisive. After 2 years of battle Moscow was completely destroyed by khan Tokhtamysh. In 1480, Ivan III had finally broken the Russians free from Tatar control, allowing Moscow to become the centre of power in Russia. Ivan III relocated the Russian capital to Moscow (the previous capital was Vladimir), and the city became the capital of an empire that would eventually encompass all of present-day Russia and other lands. In 1571, the Crimean Tatars attacked and sacked Moscow, burning everything but the Kremlin. 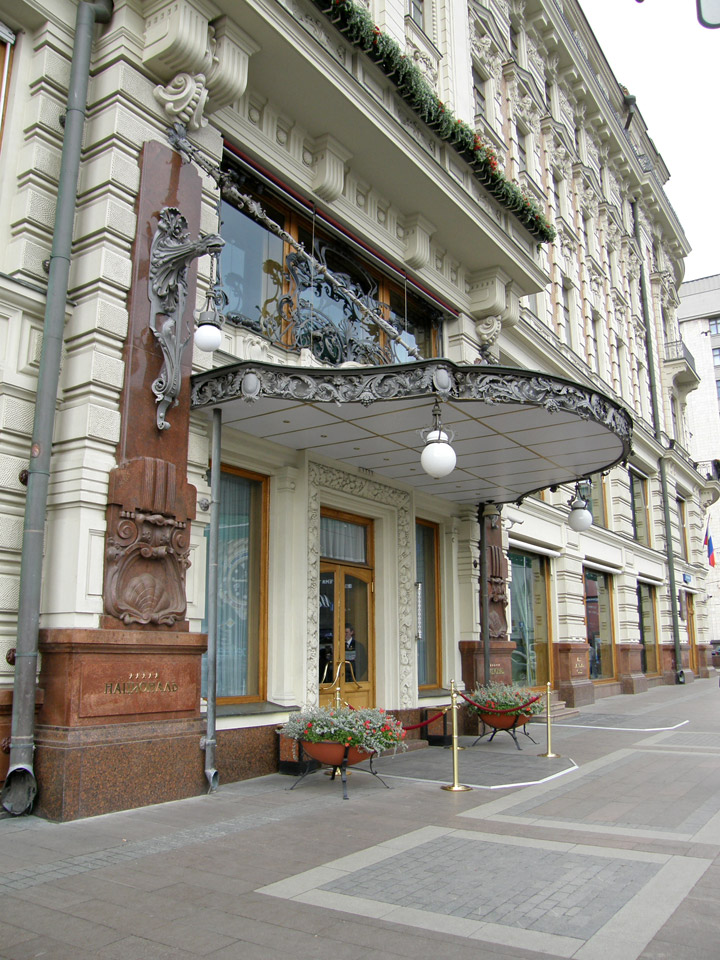 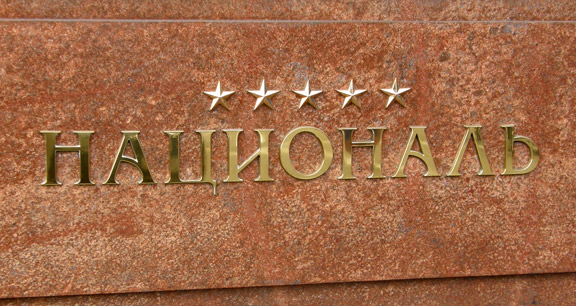 In 1609 the Swedish-Finnish army led by Count Jacobus (Jaakko) De la Gardie ("Lazy Jaakko") and Evert (Eetvartti) Horn started their march from Velikiy Novgorod towards Moscow to help Tsar Vasili Shuiski, entered Moscow in 1610 and suppressed the rebellion against Tsar, but leaving it early next year 1611, following which the Polish-Lithuanian army invaded. 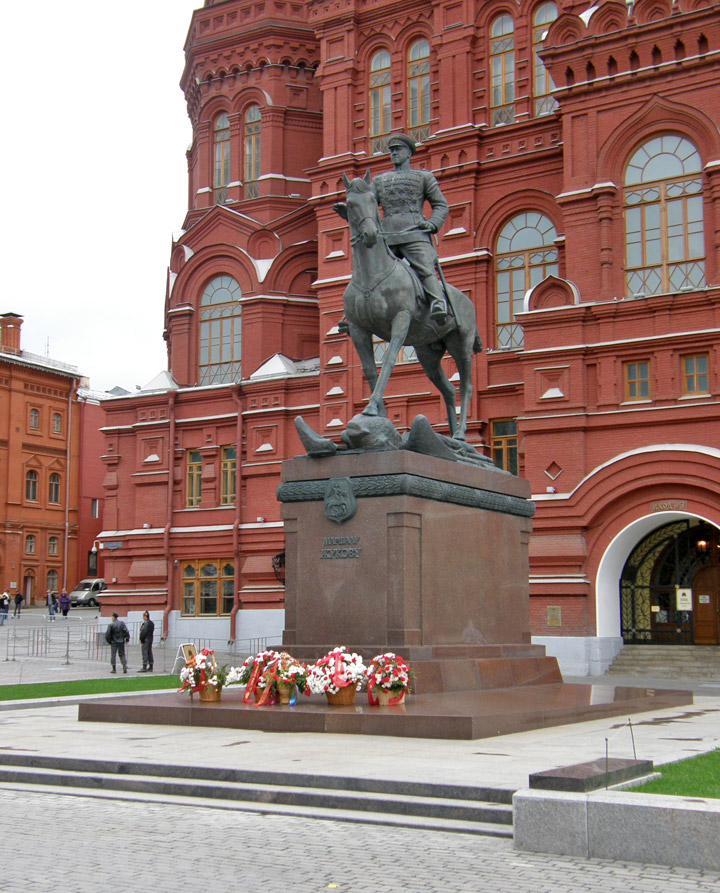 Soviet military commander who, in the course of World War II, led the Red Army to liberate the Soviet Union from the Axis Powers' occupation,
to advance through much of Eastern Europe, and to conquer Germany's capital, Berlin.

The 17th century was rich in popular risings, such as the liberation of Moscow from the Polish-Lithuanian invaders (1612), the Salt Riot (1648), the Copper Riot (1662), and the Moscow Uprising of 1682. The city ceased to be Russia's capital in 1712, after the founding of St. Petersburg by Peter the Great on the Baltic coast in 1703. When Napoleon invaded Russia in 1812, the Muscovites burned the city and evacuated, as Napoleon's forces were approaching on 14 September. Napoleon's army, plagued by hunger, cold, and poor supply lines, was forced to retreat and was nearly annihilated by the devastating Russian winter and sporadic attacks by Russian military forces. In January 1905, the institution of the City Governor, or Mayor, was officially introduced in Moscow, and Alexander Adrianov became Moscow's first official mayor. Following the Russian Revolution of 1917, on March 12, 1918, Moscow became the capital of the Russian Soviet Federative Socialist Republic and the Soviet Union less than five years later. 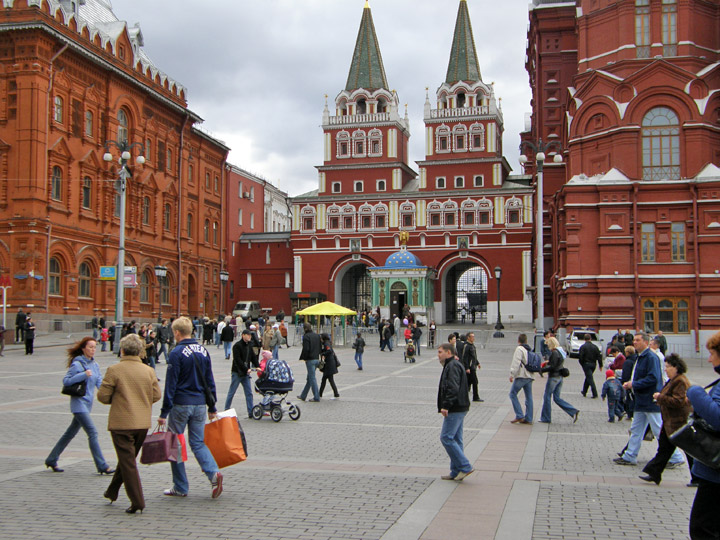 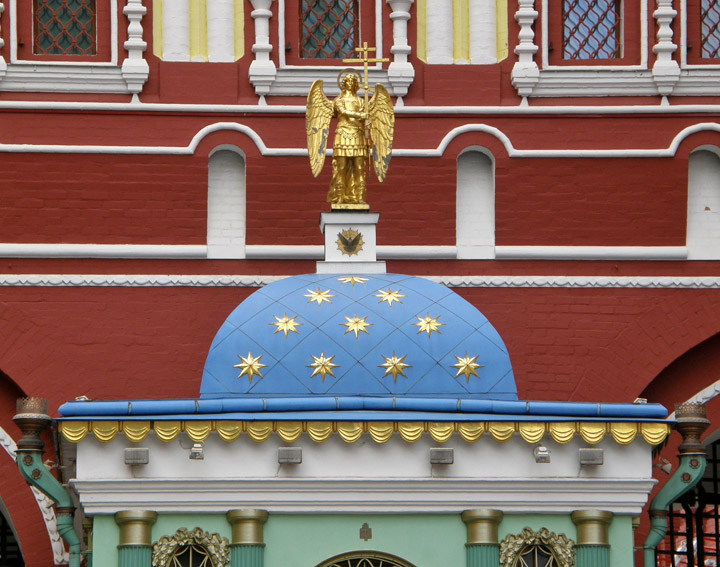 During the Great Patriotic War (a part of World War II after German invasion in the USSR), the Soviet State Committee of Defence and the General Staff of the Red Army was located in Moscow. In 1941, sixteen divisions of the national volunteers (more than 160,000 people), twenty-five battalions (18,500 people) and four engineering regiments were formed among the Muscovites. In November 1941, German Army Group Centre was stopped at the outskirts of the city and then driven off in the course of the Battle of Moscow. Many factories were evacuated, together with much of the government, and from October 20 the city was declared to be under siege. Its remaining inhabitants built and manned antitank defenses, while the city was bombarded from the air. It is of some note that Stalin refused to leave the city, meaning the general staff and the council of people's commissars remained in the city as well. Despite the siege and the bombings, the construction of Moscow's metro system, continued through the war and by the end of the war several new metro lines were opened. On May 1, 1944 a medal For the defense of Moscow and in 1947 another medal In memory of the 800th anniversary of Moscow were instituted. On May 8, 1965 in commemoration of the 20th anniversary of the victory in World War II, Moscow was one of twelve Soviet cities awarded the title of the Hero City. In 1980, it hosted the Summer Olympic Games. 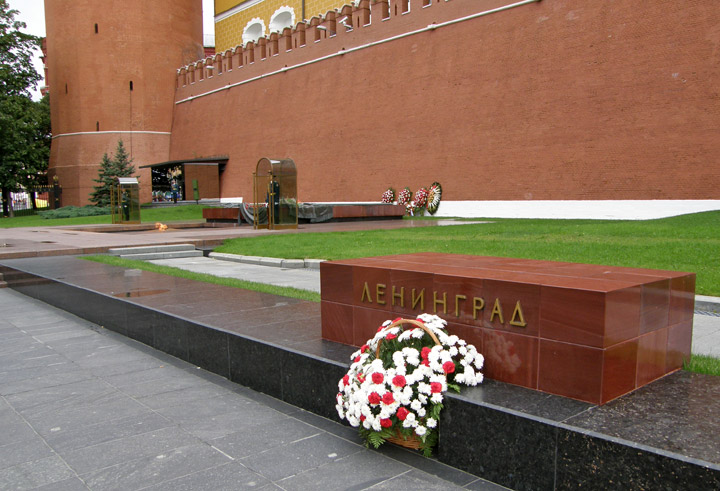 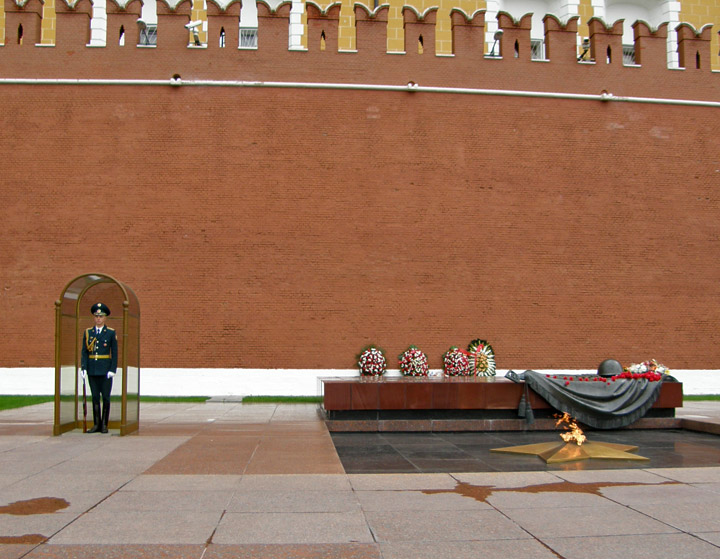 Eternal Flame of the Unknown Soldier

In 1991 Moscow was the scene of a coup attempt by the government members opposed to the reforms of Mikhail Gorbachev. When the USSR was dissolved in the same year, Moscow continued to be the capital of Russia. Since then, the emergence of a market economy in Moscow has produced an explosion of Western-style retailing, services, architecture, and lifestyles. 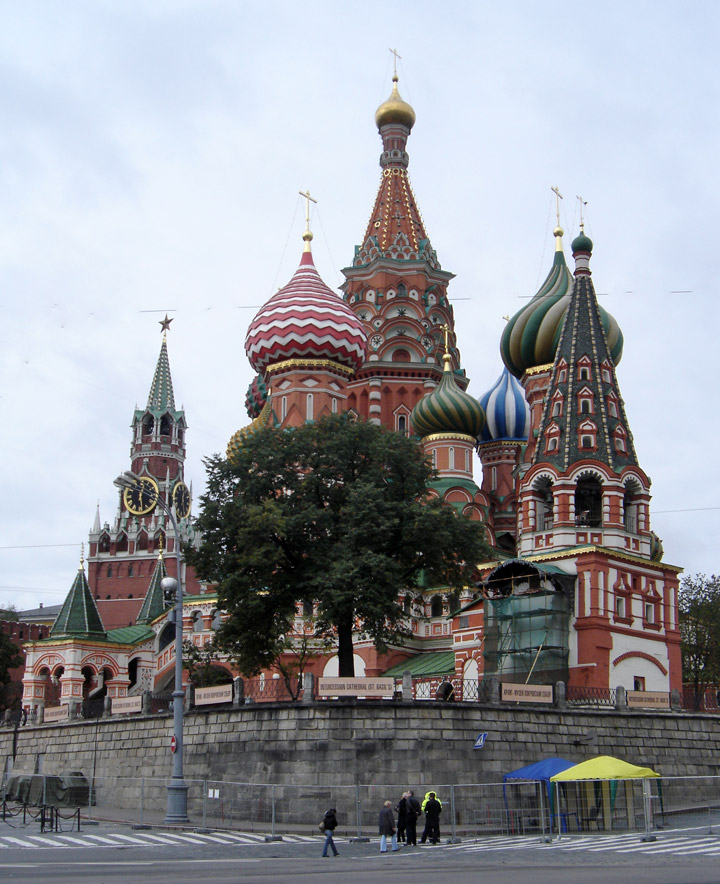 Moscow's architecture and performing arts culture are world-renowned. Moscow is also well known as the site of Saint Basil's Cathedral, with its elegant onion domes, as well as the Cathedral of Christ the Savior and the Seven Sisters. The Patriarch of Moscow, whose residence is the Danilov Monastery, serves as the head of the Russian Orthodox Church. Moscow also hosted the 1980 Summer Olympics. For a long time the view of the city was dominated by numerous Orthodox churches. The look of the city changed drastically during Soviet times, mostly due to Joseph Stalin, who oversaw a large-scale effort to modernise the city. He introduced broad avenues and roadways, some of them over ten lanes wide, but he also destroyed a great number of historically significant architectural works. The Sukharev Tower, as well as numerous mansions and stores lining the major streets, and various works of religious architecture, such as the Kazan Cathedral and the Cathedral of Christ the Saviour, were all destroyed during Stalin's rule. During the 1990s, however, both the latter were rebuilt. 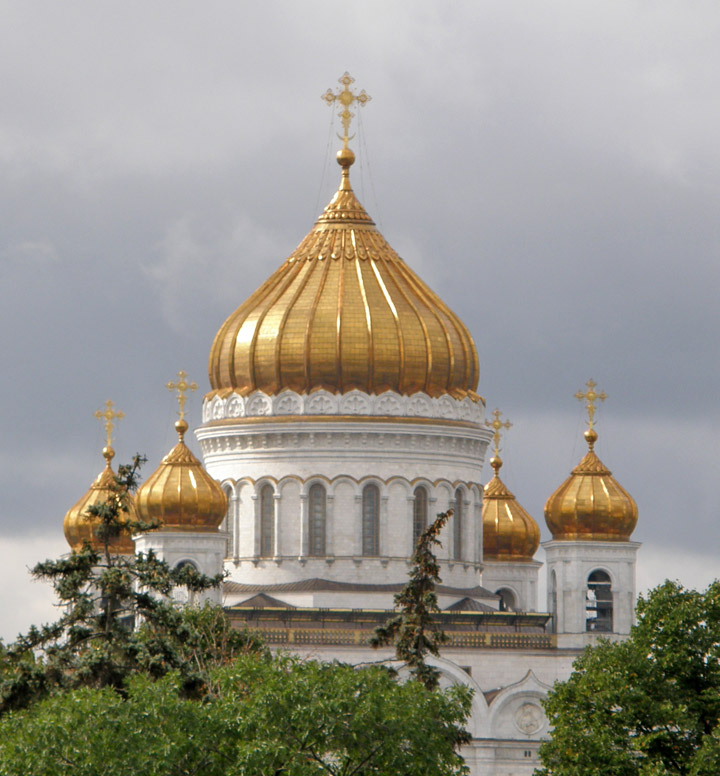 Cathedral of Christ the Savior

More Photos of Cathedral of Christ the Savior

Architect Vladimir Shukhov was responsible for building several of Moscow's landmarks during early Soviet Russia. The Shukhov Tower, just one of many hyperboloid towers designed by Shukhov, was built between 1919 and 1922 as a transmission tower for a Russian broadcasting company. Shukhov also left a lasting legacy to the Constructivist architecture of early Soviet Russia. He designed spacious elongated shop galleries, most notably the Upper Trade Rows (GUM) on Red Square, bridged with innovative metal-and-glass vaults. 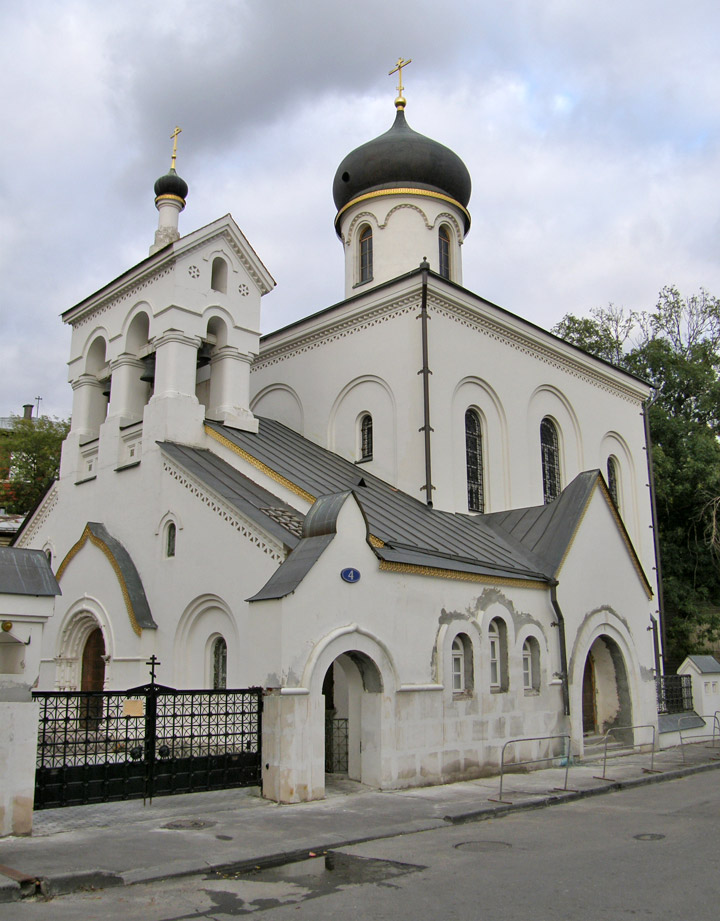 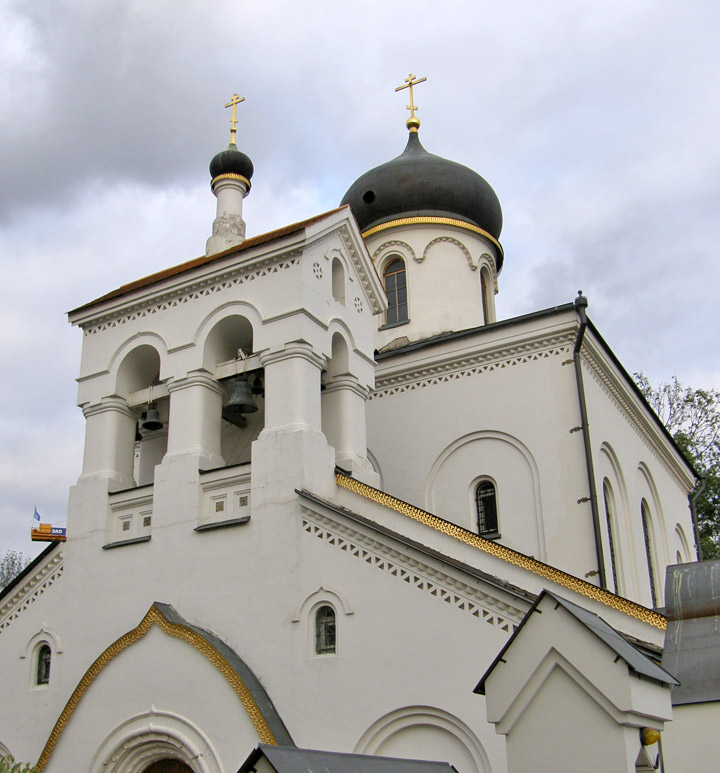 Stalin, however, is also credited with building the The Seven Sisters, comprising seven, cathedral-like structures. A defining feature of Moscow's skyline, their imposing form was allegedly inspired by the Manhattan Municipal Building in New York City, and their style - with intricate exteriors and a large central spire - has been described as Stalinist Gothic architecture. All seven towers can be seen from most elevations in the city; they are among the tallest constructions in central Moscow apart from the Ostankino Tower which, when it was completed in 1967, was the tallest free-standing land structure in the world and today remains the world's second-tallest. The Soviet policy of providing mandatory housing for every citizen and his or her family, and the rapid growth of the Muscovite population in Soviet times, also led to the construction of large, monotonous housing blocks, which can often be differentiated by age, sturdiness of construction, or 'style' according to the neighbourhood and the materials used. Most of these date from the post-Stalin era and the styles are often named after the leader then in power - Brezhnev, Khrushchev, etc - and they are usually ill-maintained. 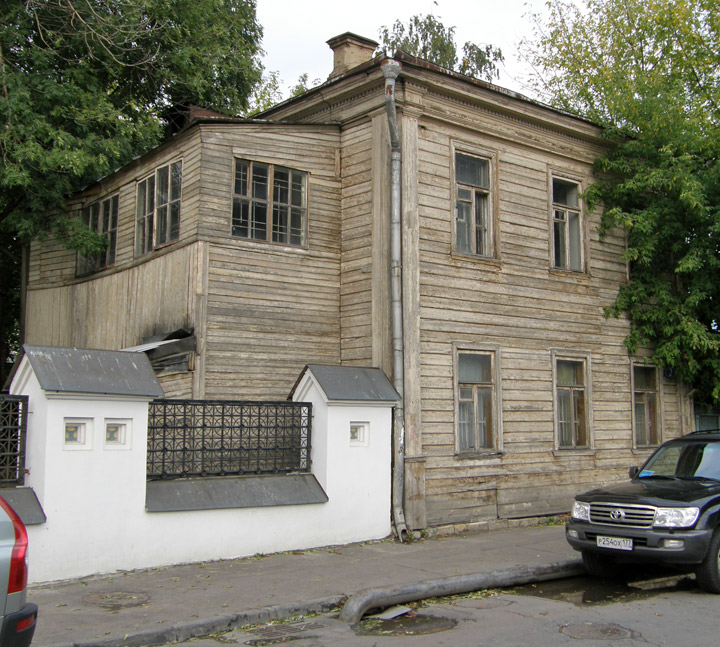 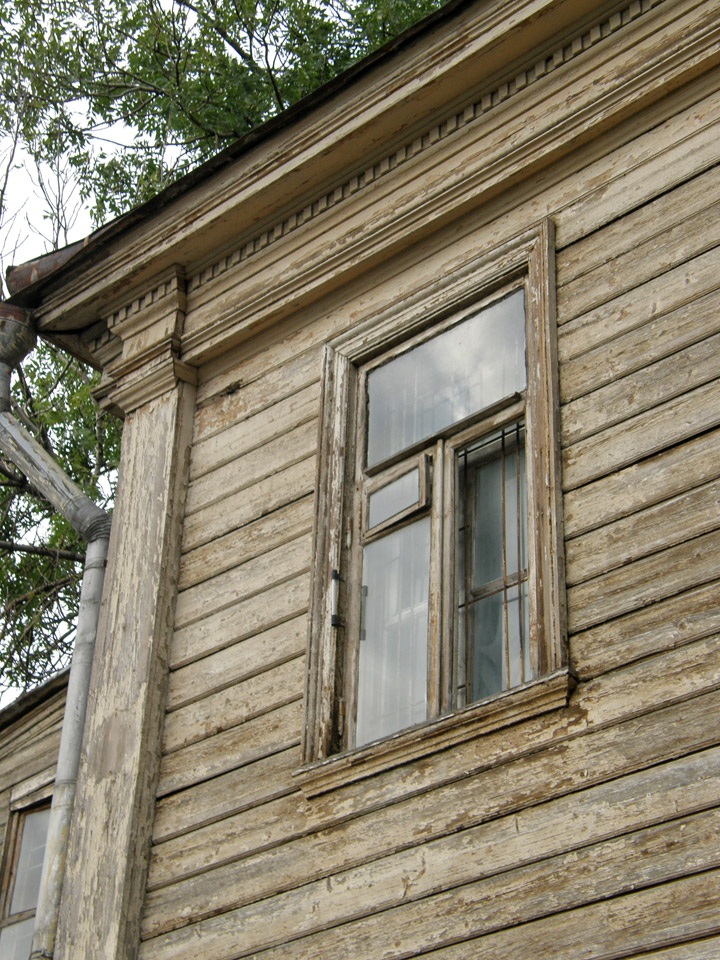 The Stalinist-era constructions, usually in the central city, are massive and usually ornamented with Socialist realism motifs that imitate classical themes. However, small churches - almost always Eastern Orthodox - that provide glimpses of the city's past still dot various parts of the city. The Old Arbat, a popular tourist street that was once the heart of a bohemian area, preserves most of its buildings from prior to the twentieth century. Many buildings found off the main streets of the inner city (behind the Stalinist facades of Tverskaya Street, for example) are also examples of the bourgeois decadence in Tsarist times. Ostankino, Kuskovo, Uzkoye and other large estates just outside Moscow originally belong to nobles from the Tsarist era, and some convents and monasteries, both inside and outside the city, are open to Muscovites and tourists. 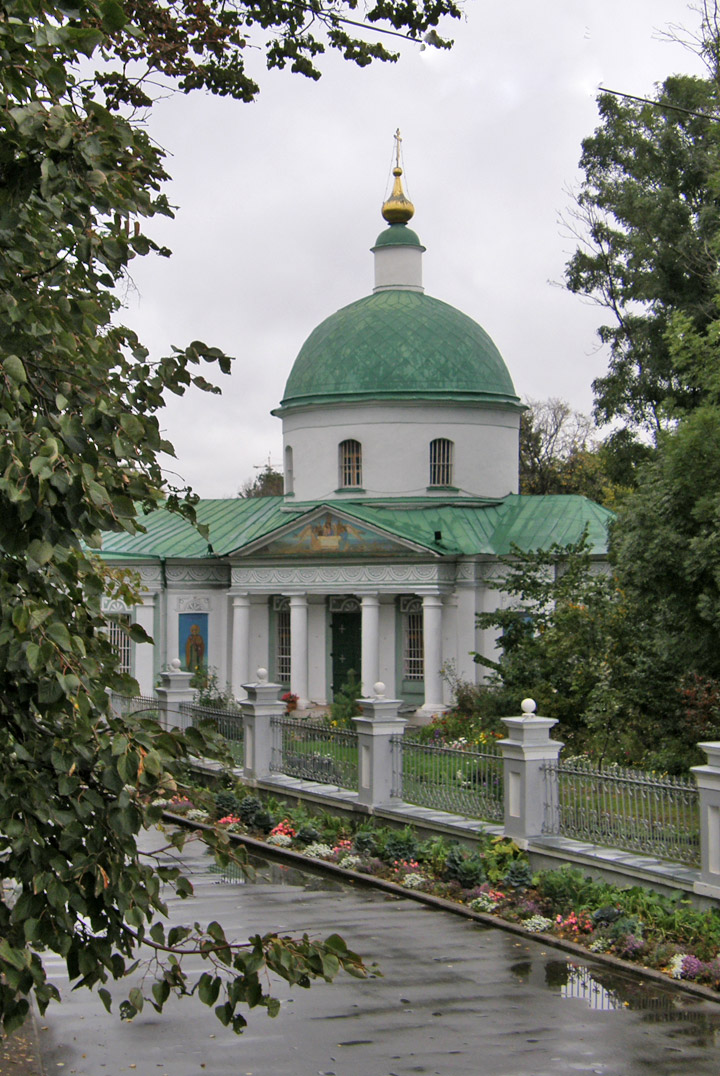 Attempts are being made to restore many of the city's best-kept examples of pre-Soviet architecture. These revamped structures are easily spotted by their bright new colors and spotless facades. There are a few examples of notable, early Soviet avant-garde work too, such as the house of the architect Konstantin Melnikov in the Arbat area. Later examples of interesting Soviet architecture are usually marked by their impressive size and the semi-Modernist styles employed, such as with the Novy Arbat project, familiarly known as "false teeth of Moscow" and notorious for the wide-scale disruption of a historic area in the Moscow downtown involved in the project. 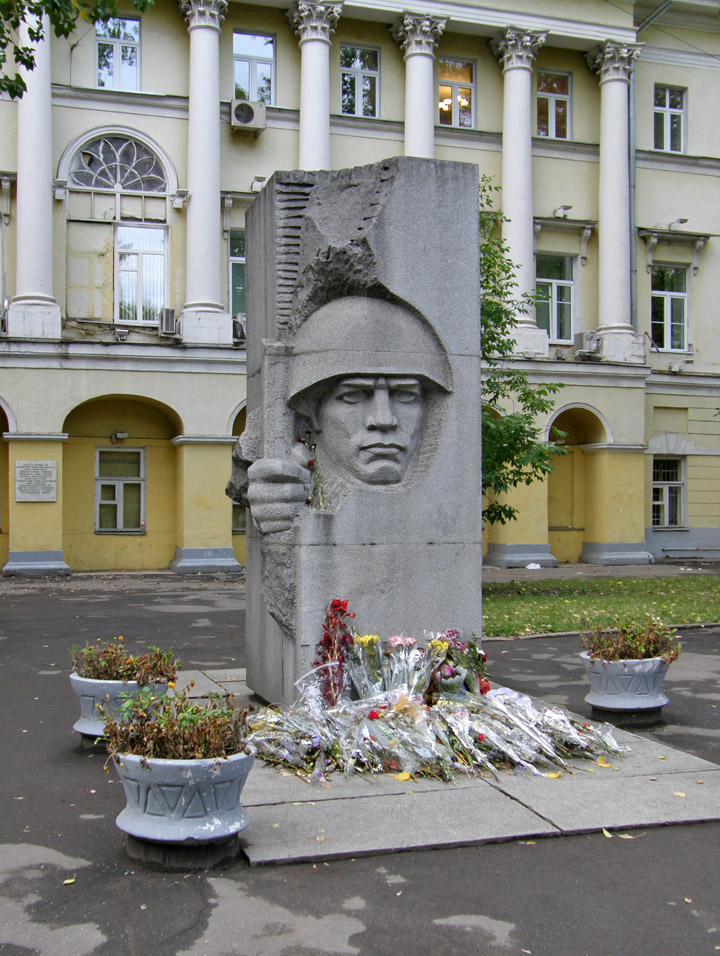 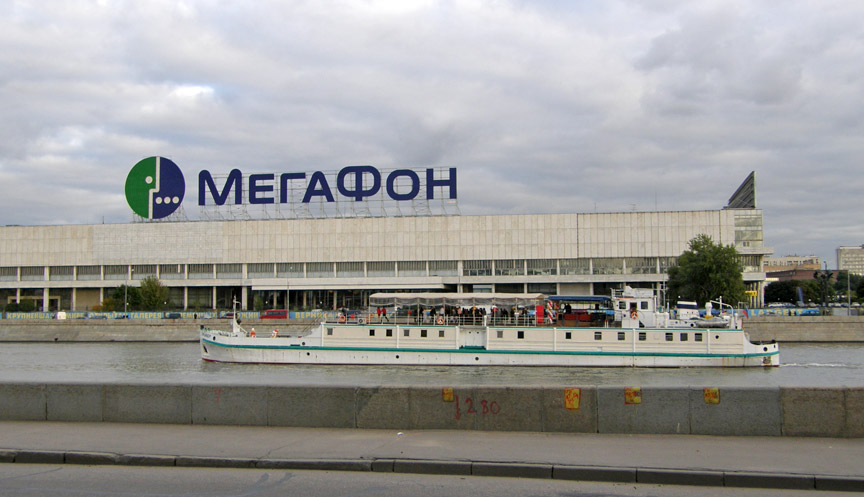 cruise boat on the Moskva River 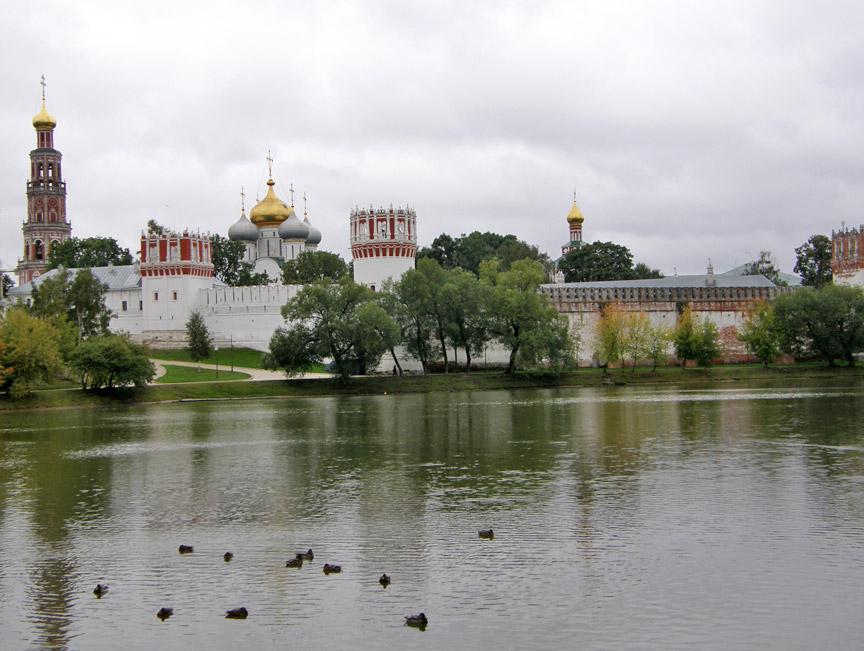 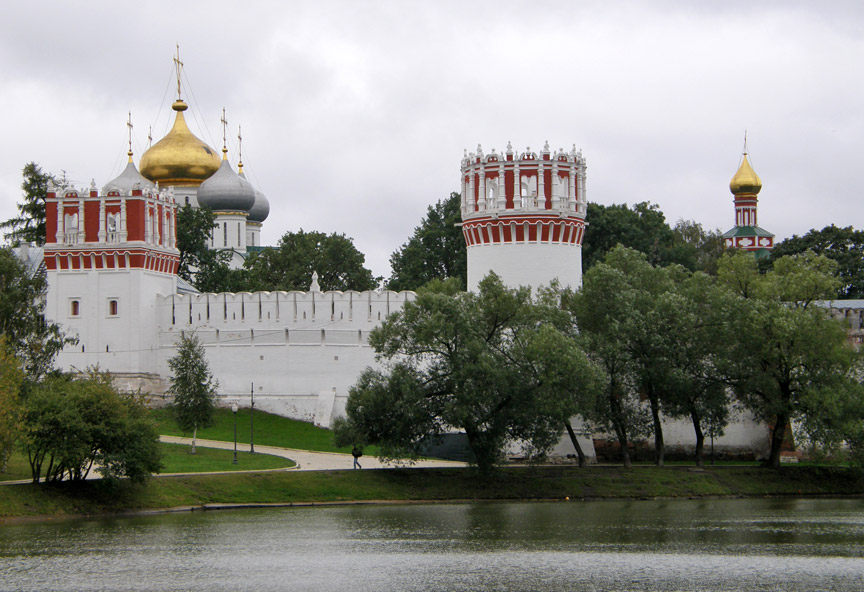 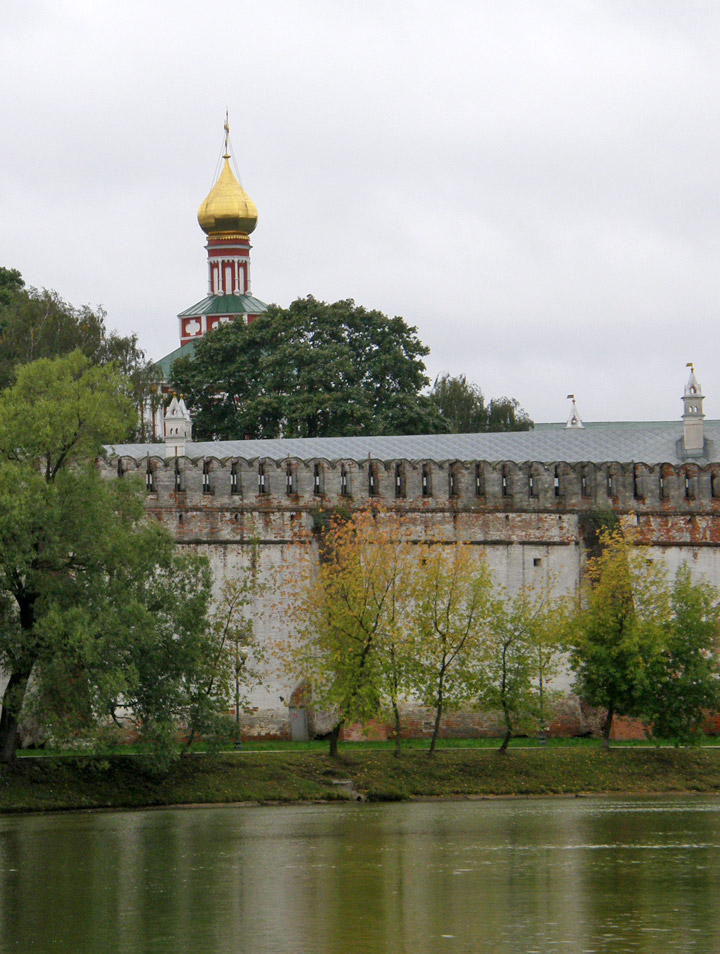 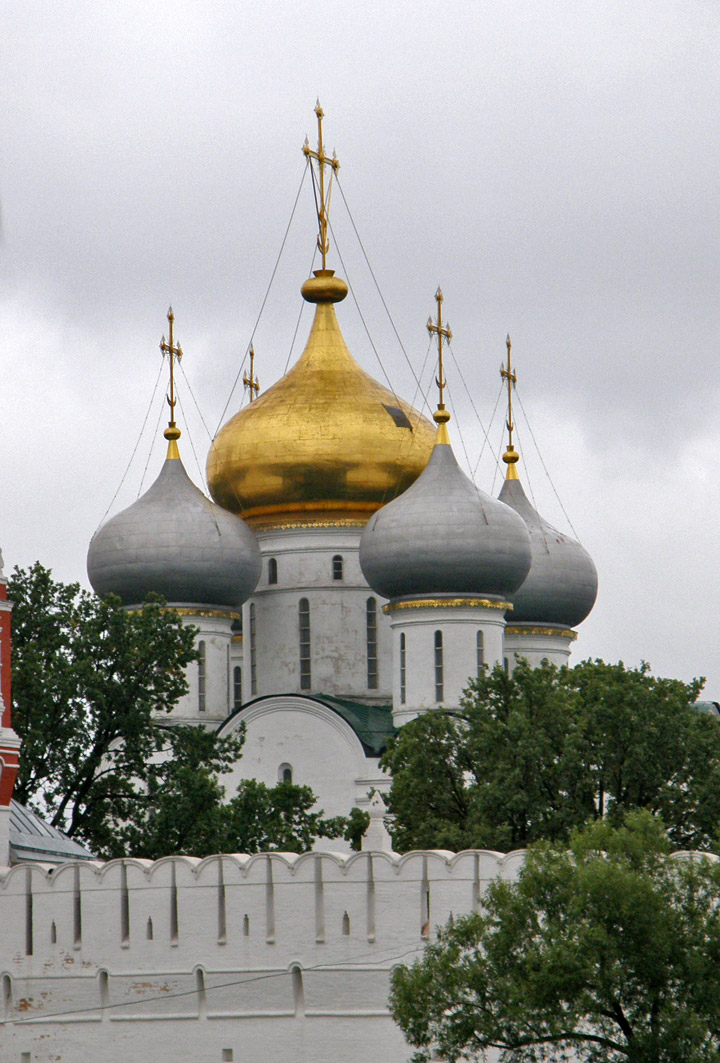 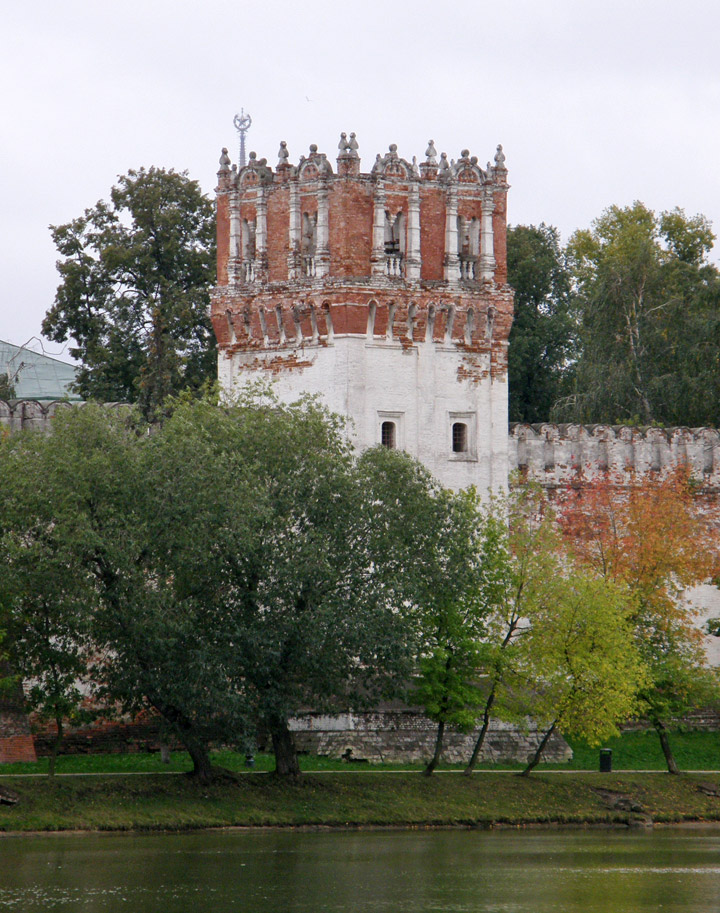