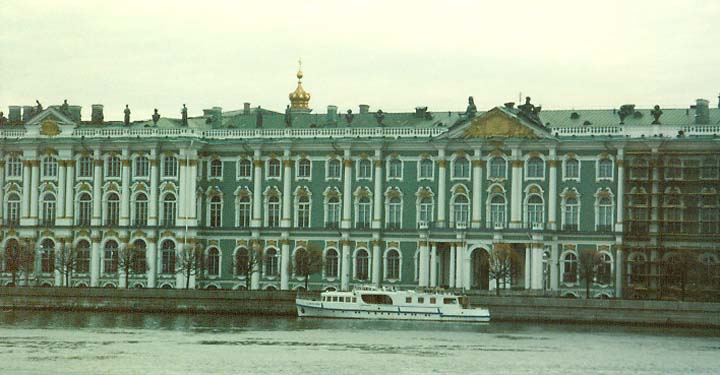 winter palace along the Neva river

More Photos of the Hermitage Museum

(Russian Sankt Peterburg), second largest city and largest seaport in Russia, located in the northwestern part of the country, at the head of the Gulf of Finland (an arm of the Baltic Sea). The capital of Russia for two centuries (1712-1918), Saint Petersburg is one of the most beautiful cities in Europe, noted for its lavish palaces and grand cathedrals. It is also a major rail junction and an industrial, cultural, and scientific center. The city is located on both banks of the Neva River and on a number of river islands. 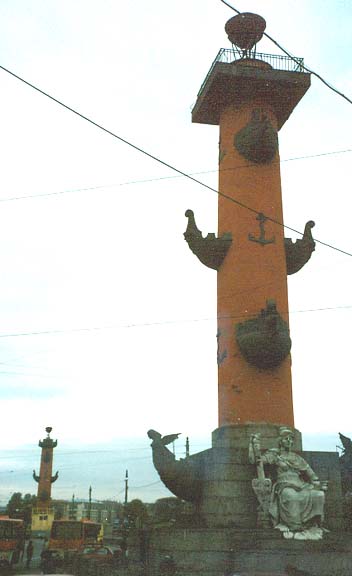 More Photos of the Beacons

Saint Petersburg has been renamed three times since its founding. Construction of the city began in 1703, ordered by Russian tsar (later emperor) Peter the Great, who named it Saint Petersburg after his patron saint. After World War I broke out in 1914, the city's Germanic name was changed to Petrograd. In 1924, upon the death of Soviet leader Vladimir Lenin, its name was changed to Leningrad. Finally, in June 1991, six months before the Union of Soviet Socialist Republics (USSR) officially dissolved and Russia emerged as an independent country, the city reverted to its original name.

Saint Petersburg’s climate is one of strong contrasts. It is affected by air masses coming off the Atlantic Ocean and by polar continental air, which in winter is very dry and cold. Saint Petersburg has cold winters, with temperatures in January averaging -10° C (14° F); the summers are generally cool, with the temperature in July averaging 17° C (63° F). Although the city’s harbor is frozen for three to four months of each year, icebreakers keep it open for much of the winter season. 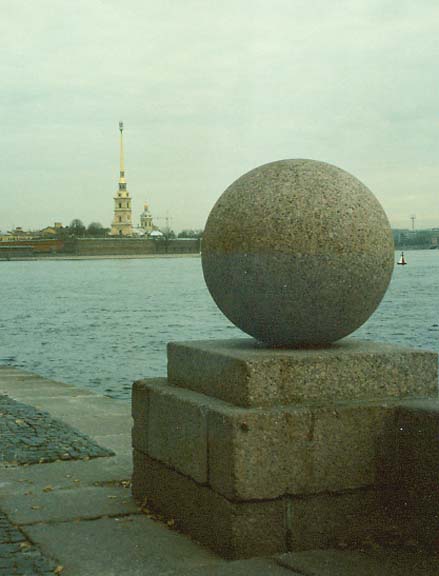 Located in the Neva River delta, Saint Petersburg spreads over the mainland and 42 river islands and is divided by more than 60 river branches and 20 canals. A 32-km (20-mi) stretch of the Neva flows within the city’s boundaries. More than 300 bridges connect the various parts of the city that are separated by waterways. While the city proper occupies about 600 sq km (about 230 sq mi), the entire Saint Petersburg metropolitan area covers about 1500 sq km (about 580 sq mi). Saint Petersburg proper is divided into 21 administrative districts, including 5 suburbs. Most of the city’s industry is located on the outskirts of the city. The dockyards are to the west, along the Gulf of Finland. 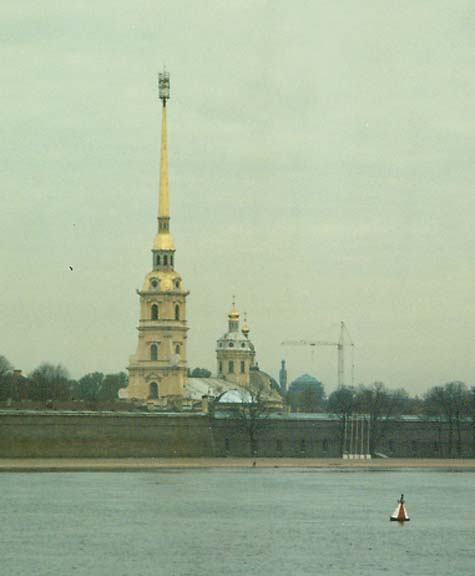 Cathedral of SS Peter & Paul
inside the fortress

The commercial areas are in the city center, close to Nevsky Prospekt, the stylish shopping boulevard famous for its magnificent buildings and large department stores. Situated on the south bank of the Neva and circumscribed to the east and south by the Fontanka River is the Admiralty district, the hub of the city, where the main avenues of central Saint Petersburg come together. The district houses the Admiralty fortress and dockyard, which was a shipyard before it became part of a naval college in 1925. Upriver from the fortress is Palace Square, where the ornate Winter Palace (built in 1762)—the winter residence of Russia’s former imperial rulers—is located. The Winter Palace now houses the world-famous Hermitage Museum. Directly across from the Admiralty district is Vasilevsky Island, the largest of all the islands in the Neva and home of the Naval Museum. 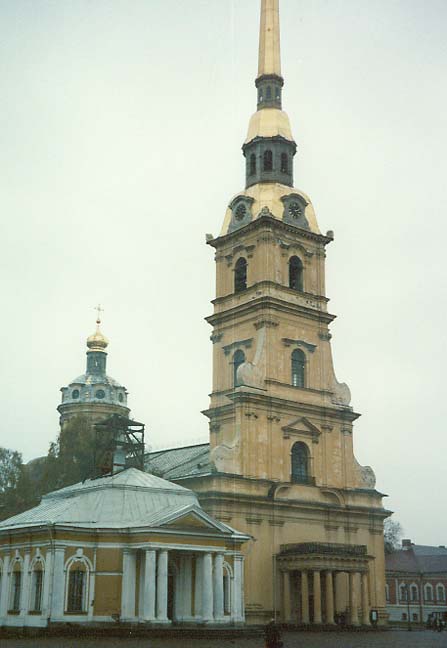 Cathedral of SS Peter & Paul
(where the Tsars are entombed)

Farther up the river, on Zayachy Island, is the Peter and Paul Fortress. It was built in 1703, before construction of the city itself began. The fortress held political prisoners until the beginning of the 20th century. The Peter and Paul Cathedral, located inside the fortress, is the burial place of the tsars and the tallest historical building (122 m/400 ft) in the city. The headquarters of Saint Petersburg’s municipal government are located in the Mariinsky Palace, which was built in 1844 on Saint Isaac's Square in the Admiralty district for Emperor Nicholas I’s daughter Maria. Also on Saint Isaac’s Square is the Cathedral of Saint Isaac, which was built between 1768 and 1858. Far to the east of the Admiralty district is the Smolny Institute, founded by Catherine the Great in the 1700s to serve as a boarding school for upper-class girls. The current building—built to replace the original structure in the early 1800s—housed the first Soviet government from the time it took power in October (or November, in the Western, or New Style, calendar) 1917 until March 1918. The Smolny now houses the offices of the city’s mayor. 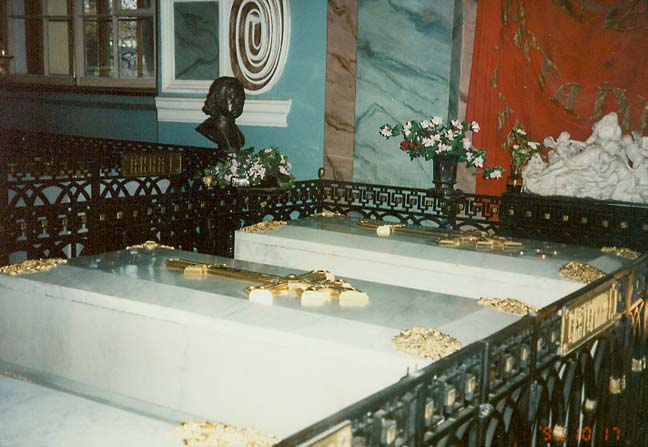 tombs of the Tsars

Outside the city proper, Saint Petersburg’s metropolitan area is home to some of Russia's most renowned historical sites. Among them is the royal village of Tsarskoye Selo (now Pushkin), where the Catherine Palace, a magnificent structure built in the mid-18th century, is located. Pushkin is situated 27 km (17 mi) south of Saint Petersburg. Pavlovsk, located less than 2 km (1 mi) south of Pushkin, is home to the Great Palace of Emperor Paul I (built from 1782 to 1786). On the Gulf of Finland, 40 km (25 mi) west of Saint Petersburg, is the former imperial residence of Petrodvorets, named for the city’s founder. Large-scale housing developments were built on the outskirts of the city in the period following World War II (1939-1945); they house the bulk of Saint Petersburg’s residents. Although most units are equipped with indoor plumbing, electricity, and telephones, the buildings are often run-down and crowded. 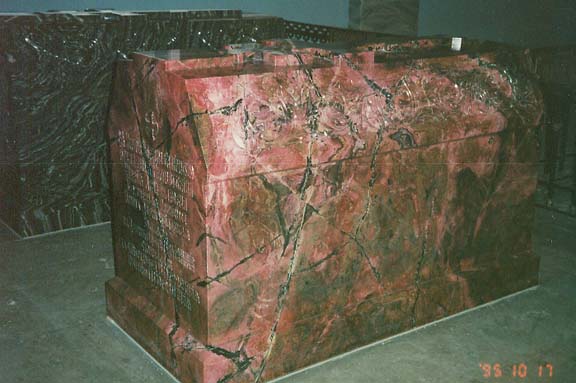 The population of Saint Petersburg proper (1995) was 5,149,689. Following significant population growth in the 1960s—a period of marked industrial expansion—the city's annual growth rate slowed considerably in the 1970s and 1980s. Stagnant population growth has been a trend in Russia’s urban areas and is attributable to such factors as a drop in the country’s birth rate and a rise in the mortality rate due to declining health standards. A slight decline in the city's population in recent years is linked to a drop in economic productivity and increased unemployment rate among city residents. 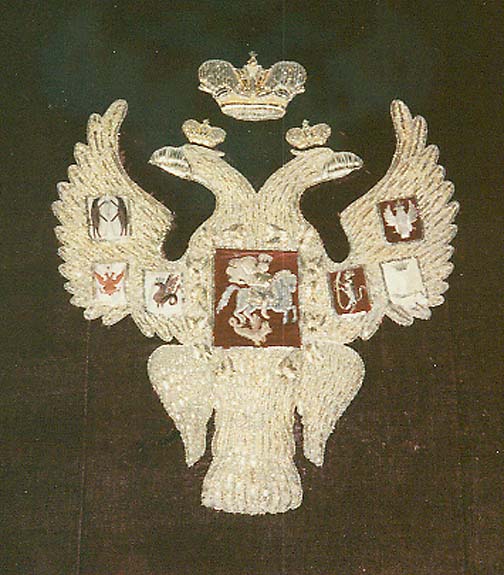 the double eagle of the Tsars
(on a coffin cover) 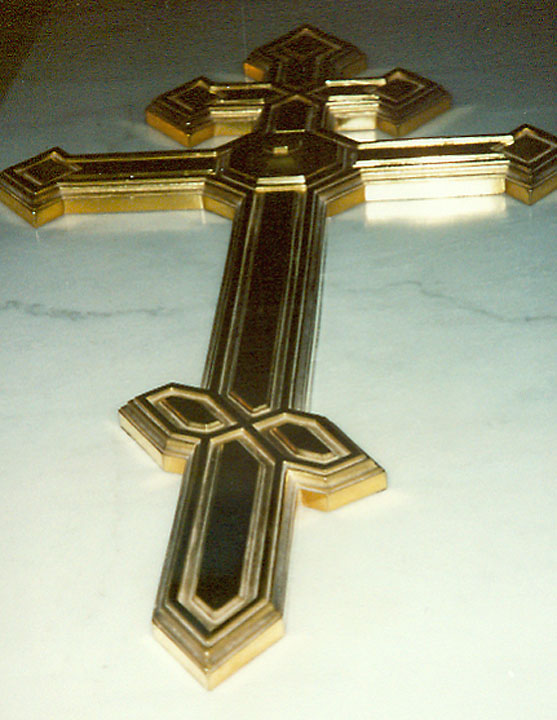 Ever since its founding, Saint Petersburg has been a multinational city. Although Russians constitute the dominant ethnic group (about 92 percent of the population), the city also has significant numbers of Ukrainians (about 3 percent of the population), followed by Jews (considered a separate ethnic group in Russia), Belarusians, and Tatars. The main religion is Russian Orthodox Christianity, but Roman Catholics, Jews, and Muslims are also well represented in the city. As in other large Russian cities, the primary spoken language is Russian. 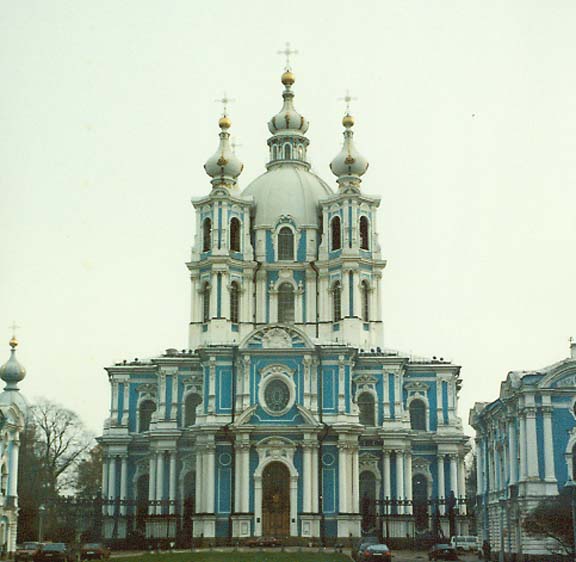 Saint Petersburg is the home of Saint Petersburg University (established in 1819), about 200 scientific institutes, and more than 40 colleges. Among the city's numerous libraries are the Russian National Library (formerly the M. E. Saltykov-Shchedrin Public Library; founded in 1795) and the Library of the Academy of Sciences (built from 1783 to 1789), one of the oldest scientific establishments in Saint Petersburg.

Church of the Resurrection of Christ 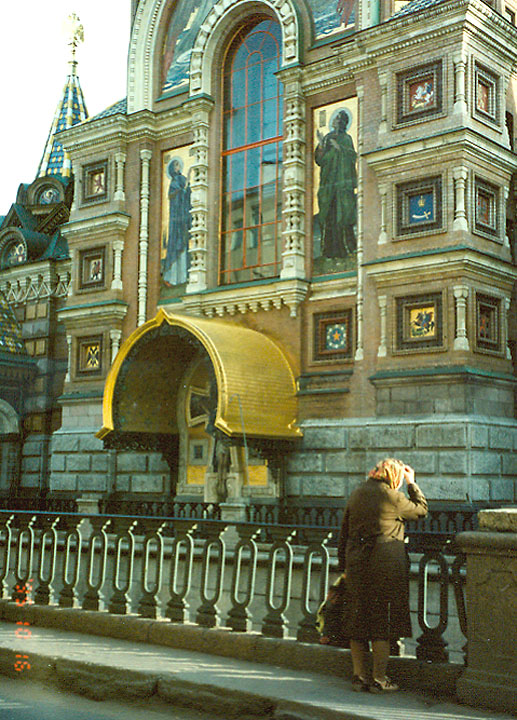 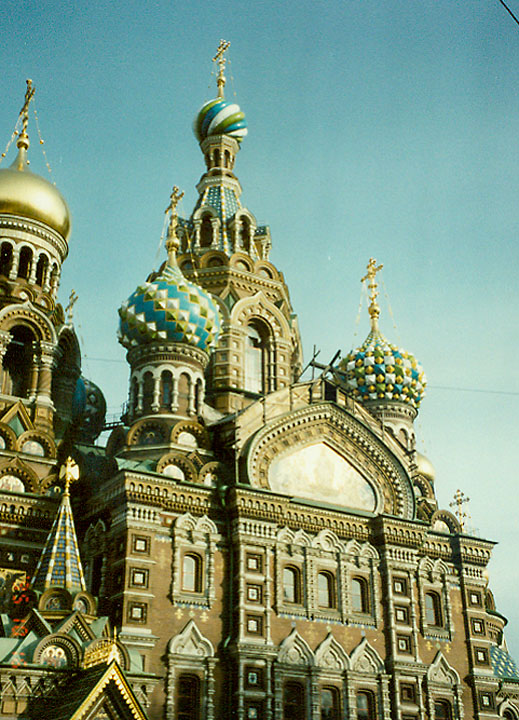 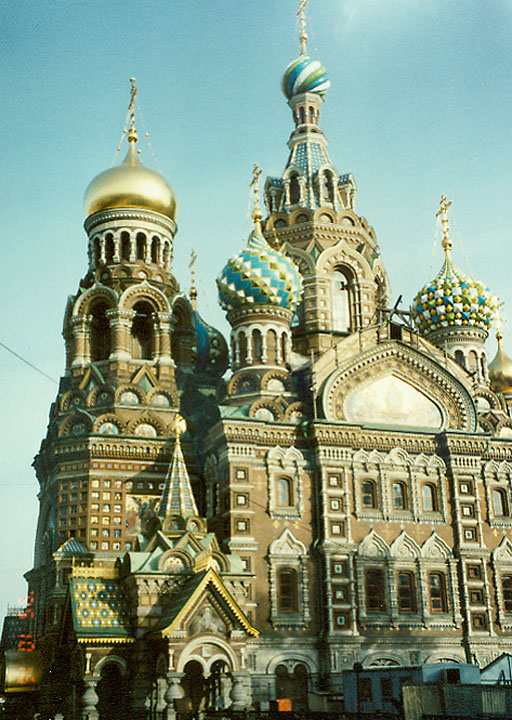 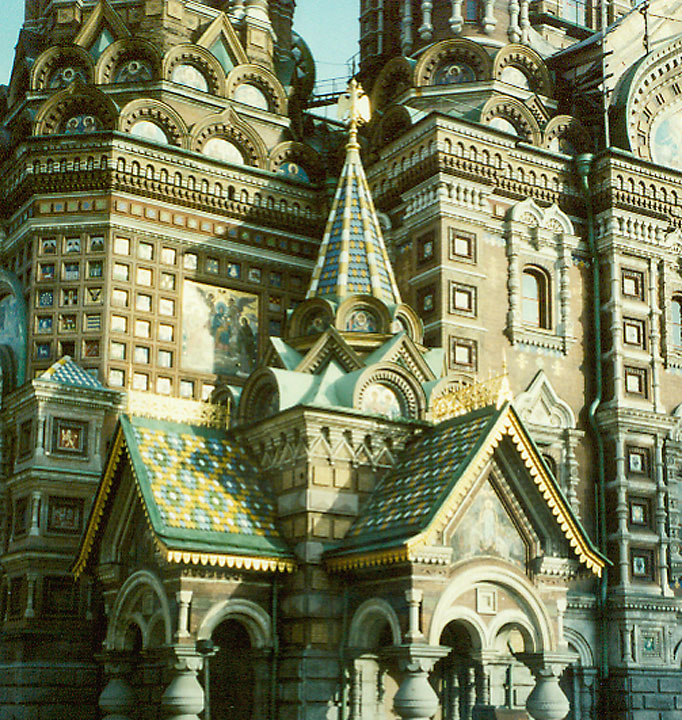 More Photos of this church 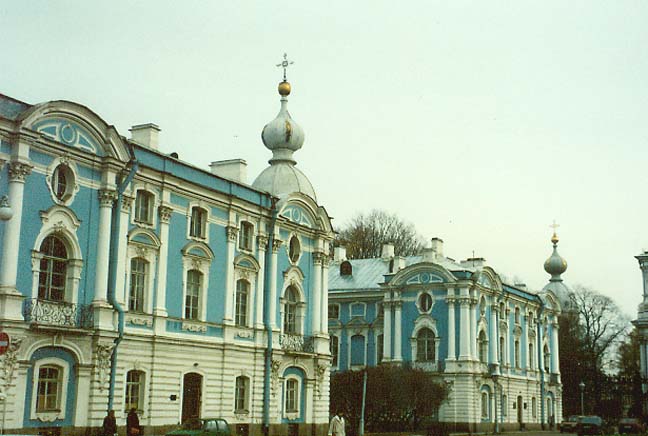 As a leading cultural center, Saint Petersburg has inspired great works of literature by Russian authors such as Aleksandr Pushkin, Fyodor Dostoyevsky, Ivan Turgenev, and Nikolay Gogol. The city is also a thriving center for dance, music, and theater. Ever since the first school of Russian ballet opened in the city in 1738, it has been the center of Russian classical dance. The Mariinsky Opera and Ballet Theater (known as the Kirov from 1935 to 1991) has been the home of some of Russia's most famous dancers, including Rudolph Nureyev and Mikhail Baryshnikov. Among the composers who spent their lives in Saint Petersburg are Peter Tchaikovsky and Dmitry Shostakovich. Shostakovich’s famous Seventh Symphony was premiered in 1942 at the Shostakovich Philharmonia Concert Hall, where today world-famous musicians appear regularly. The Pushkin Dramatic Theater is known for its classical and modern drama productions, while the Theater of Musical Comedy is highly regarded for its original repertoire. Saint Petersburg celebrates music and arts during a week-long festival held in midsummer. 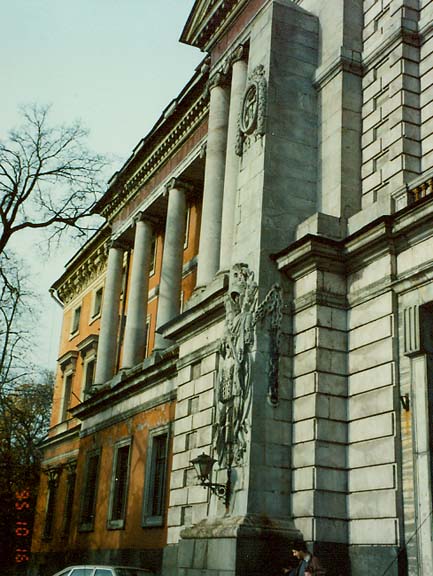 Saint Petersburg is also home to some of the finest museums in the world. The most famous is the State Hermitage Museum, founded in 1764 by Russian empress Catherine the Great as a museum for the royal court. The Hermitage has a vast collection of Russian, Asian, and Western European art. Other museums in the city are the Russian Museum, which has one of the best collections of Russian art in the country, and the Ethnographic Museum of Russia, with exhibits on the peoples of Russia and the former Soviet Union. 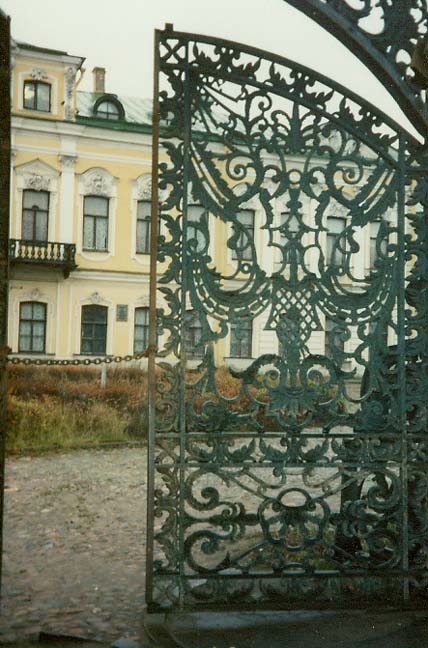 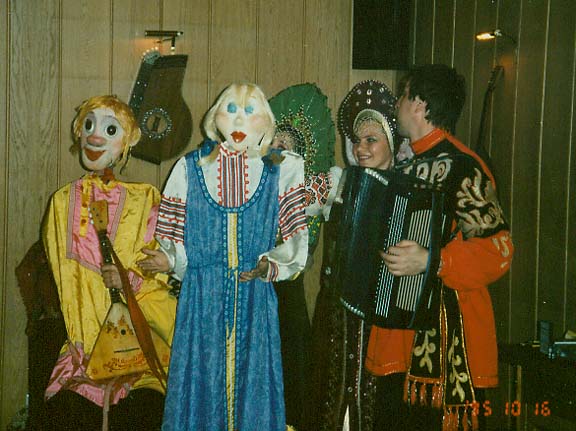 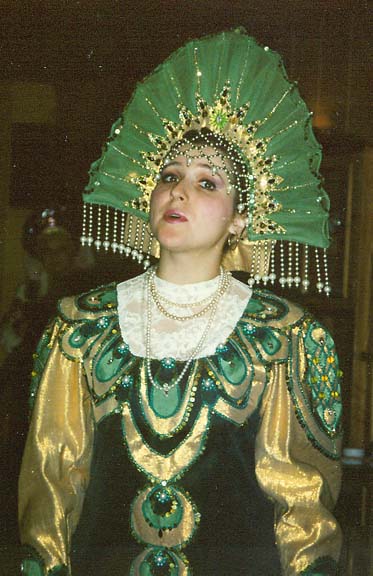 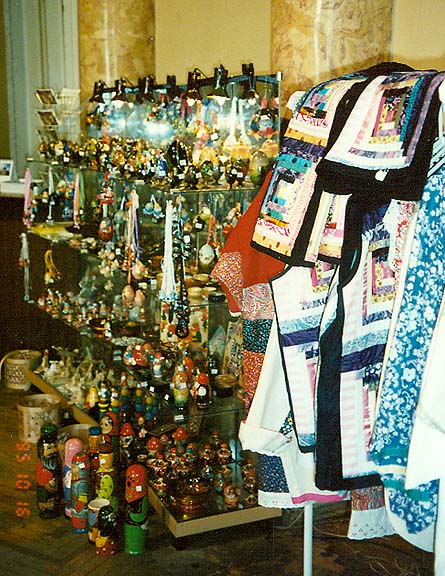 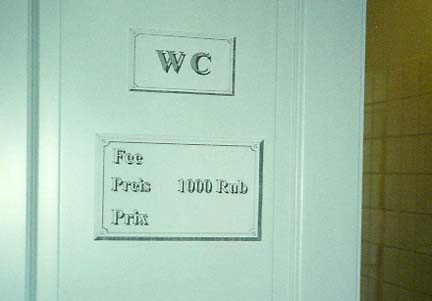 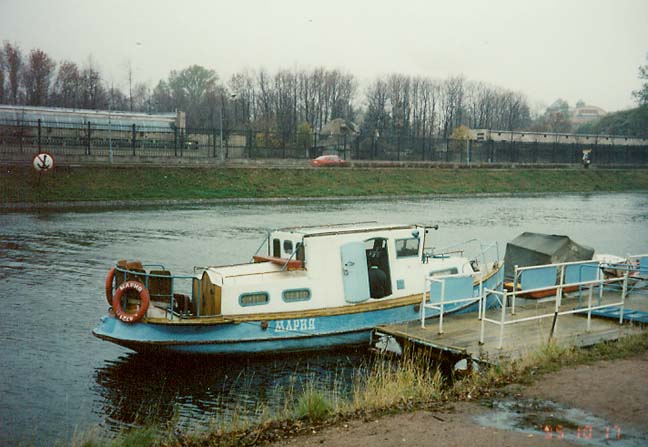 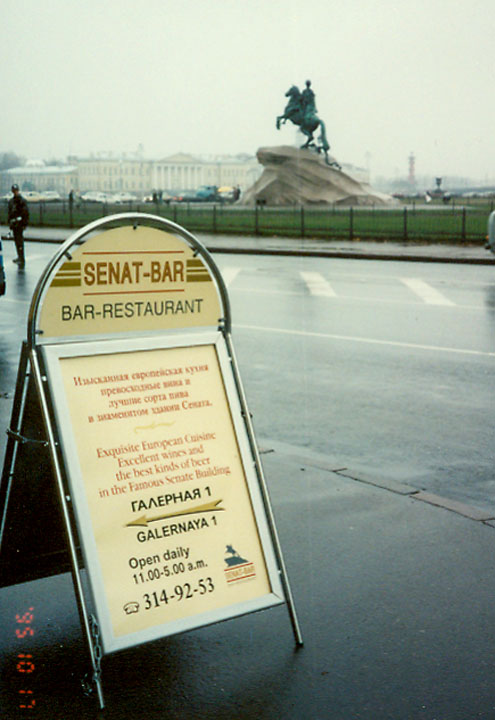 or have a gourmet meal in sight of Peter the Greatreat 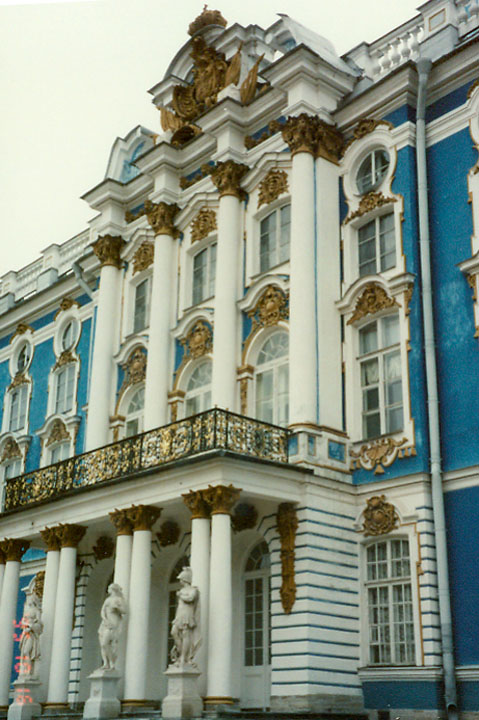 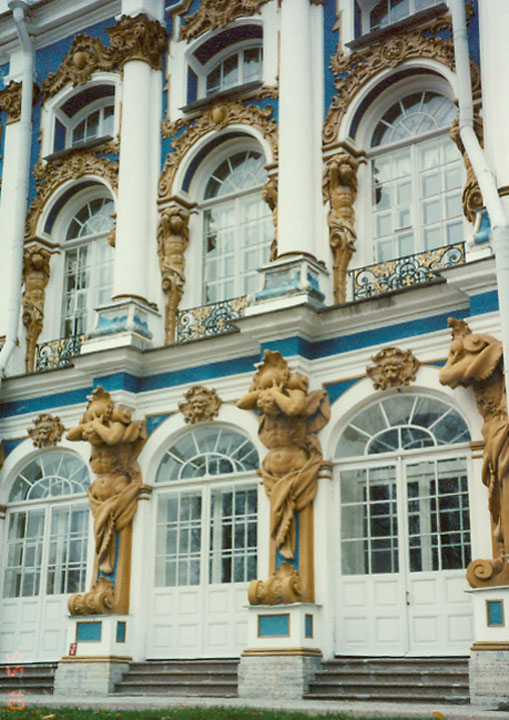 More Photos of the Summer Palace 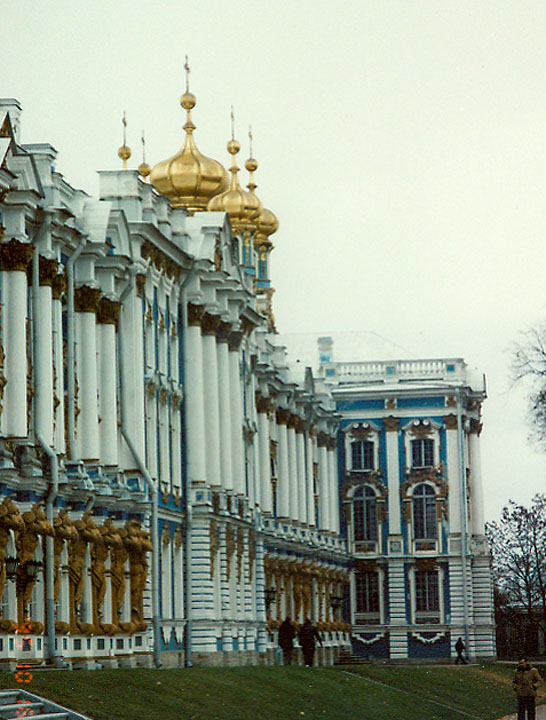 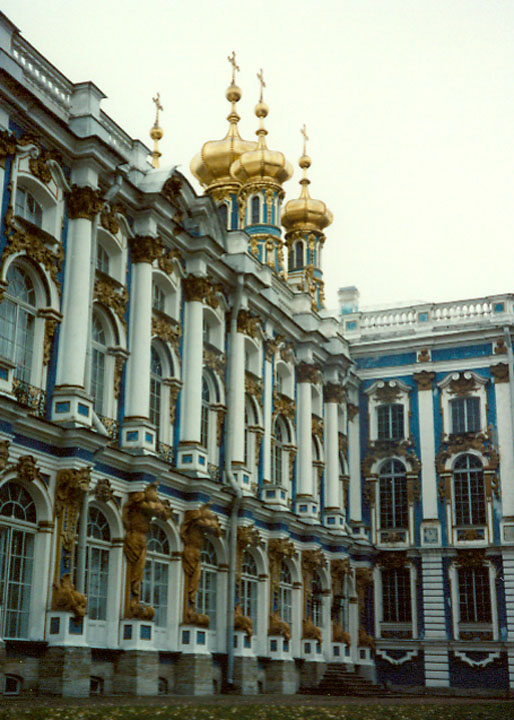 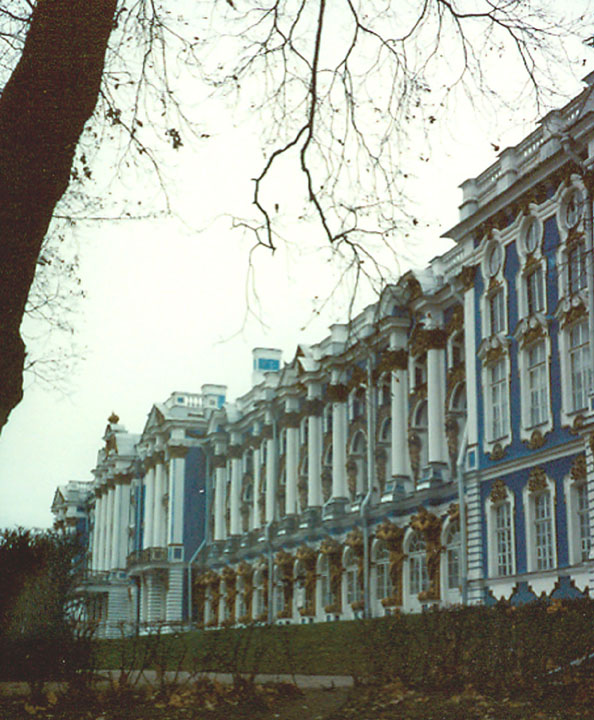 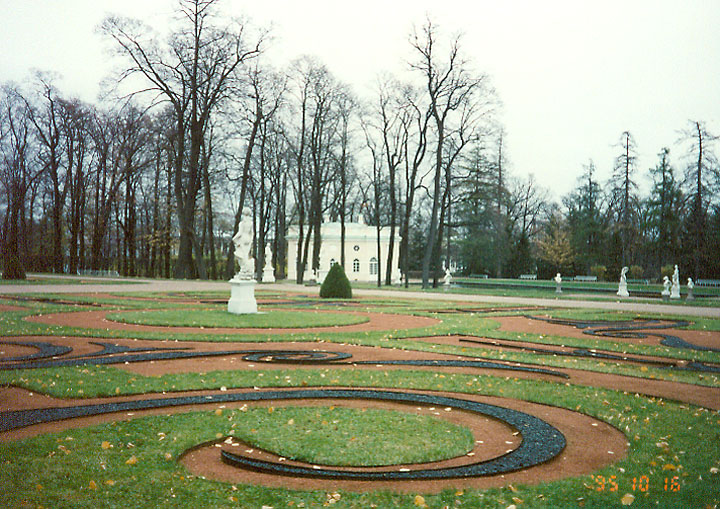