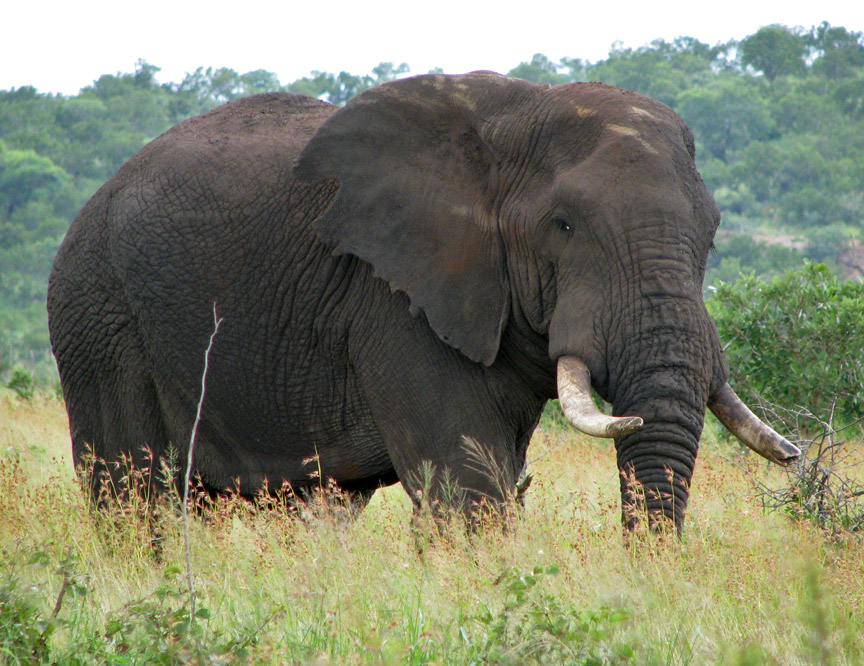 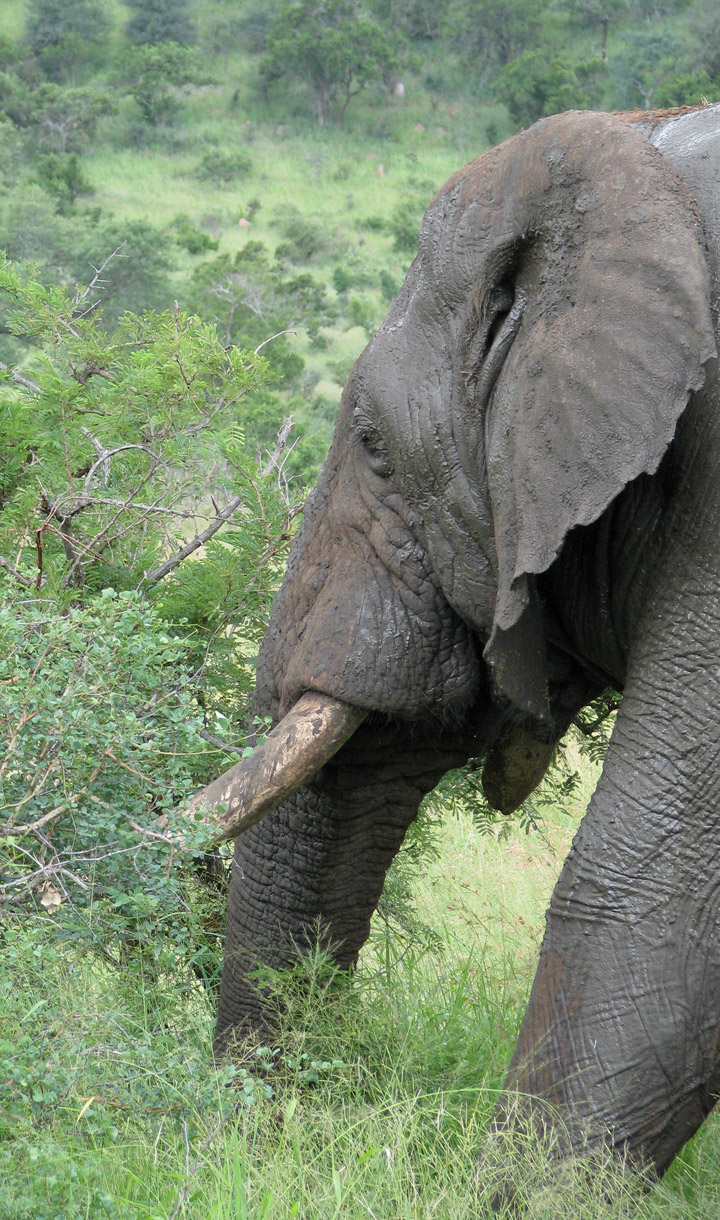 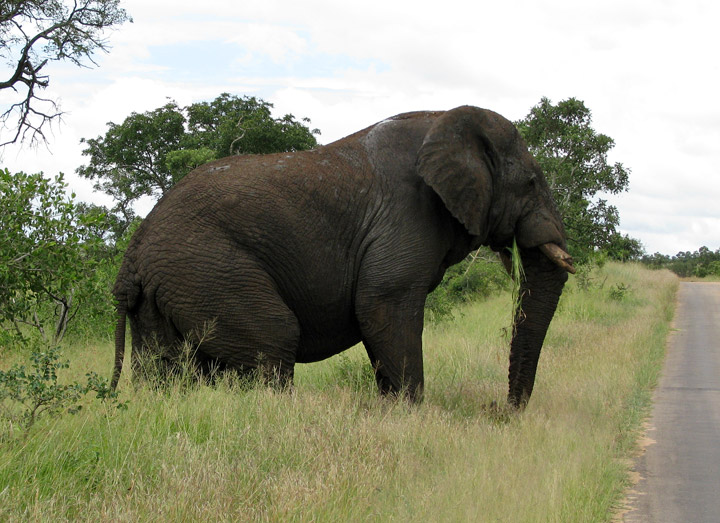 coming out of the bush 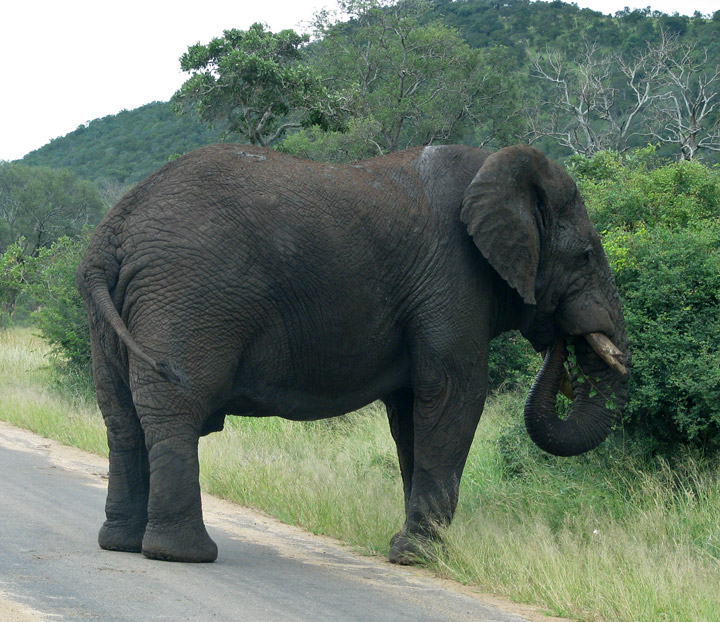 The animal is characterized by its large head; two large ears that cover its shoulders and radiate excess heat; a large and muscular trunk; two prominent tusks, which are well-developed in both sexes, although more commonly in males; a short neck; a large, barrel-like body; four long and heavy legs; and a relatively short tail. 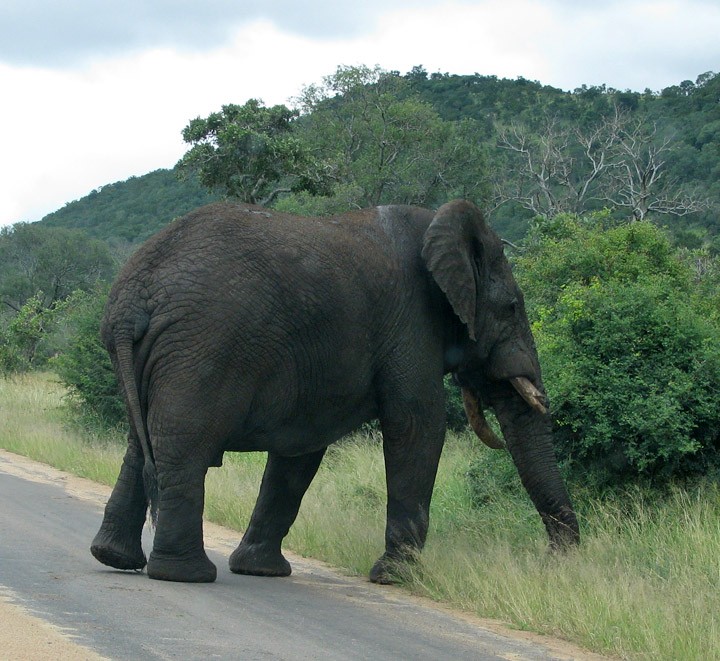 The animal is protected by a heavy but flexible layer of gray-brown skin, dotted with mostly undeveloped patches of hair and long, black hair at the tip of its tail. Its back feet have three toes that form a hoof, while the number of toes on the front feet have varied between four and five. The front is smoother and less convex than that of the Asian Elephant. 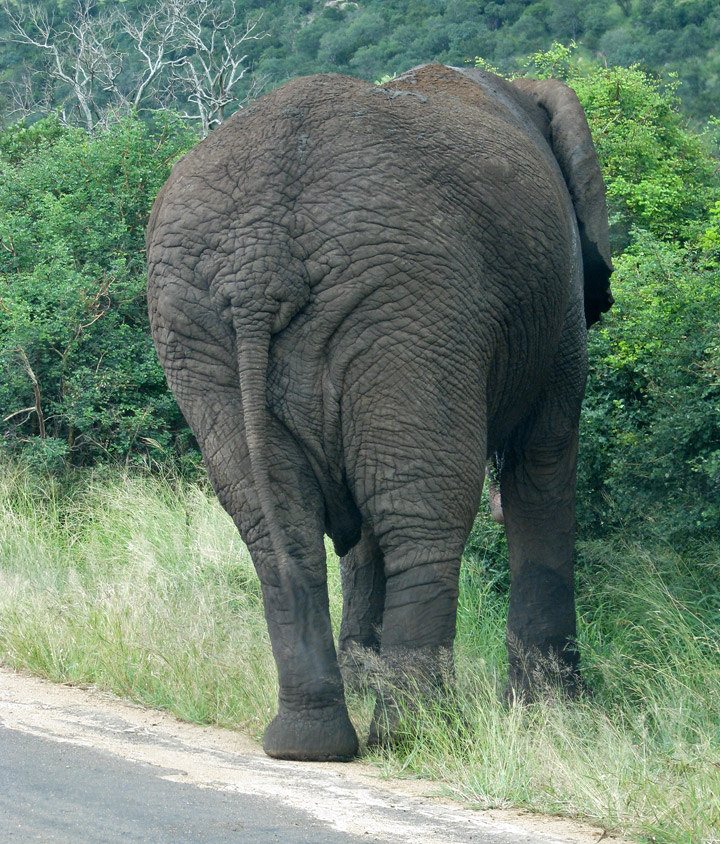 The trunk is the most characteristic feature of the African Bush Elephant. It is formed by the fusion and elongation of the nose and upper lip, forming a flexible and strong organ made purely of muscle. 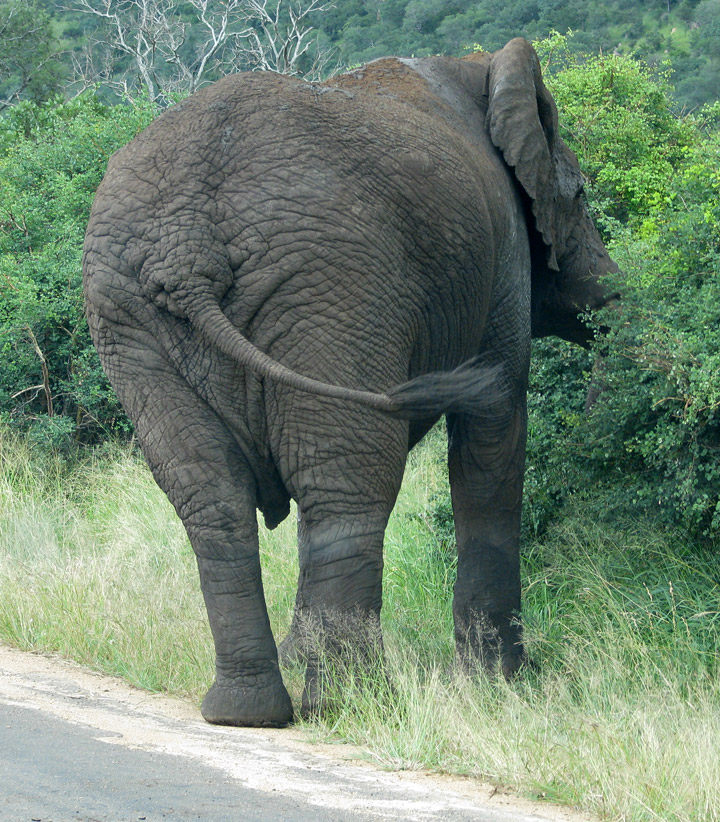 and back into the bush

Little scientific research has been carried out into elephants' cognitive or perceptual abilities. An exception is a recent report that African elephants are able to use seismic vibrations at infrasound frequencies for communication. 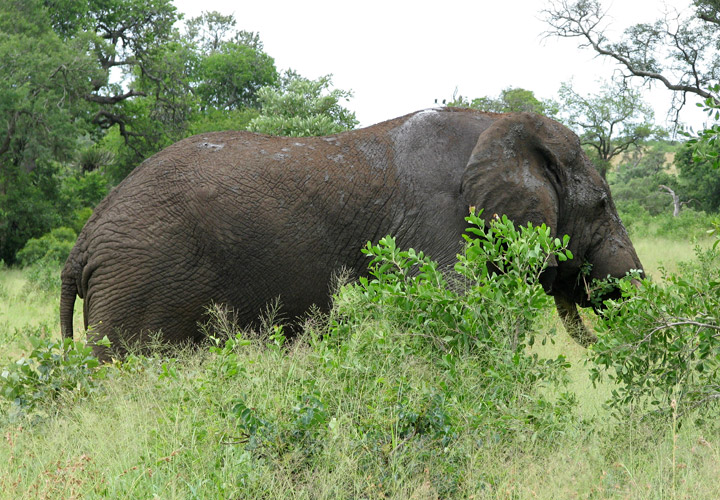 African elephants are herbivorous. Their diet varies according to their habitat; elephants living in forests, partial deserts, and grasslands all eat different proportions of herbs and tree or shrubbery leaves. Elephants inhabiting the shores of Lake Kariba have been recorded eating underwater plant life. In order to break down the plants they consume, the African Bush Elephant has four large molars, two in each mandible of the jaw. Each of these molars is 10 cm wide and 30 cm long. Over time, these molars are worn away and new ones are grown to replace them as the elephant ages. Around the age of 15 their milk teeth are replaced by new ones that last until the age of 30, and then by another set which wear off past the age of 40, being replaced by the last set of teeth that last approximately until the age of 65–70. Not much later, the animal dies of starvation from not being able to feed correctly. There are known cases of over 80 year old specimens in captivity. 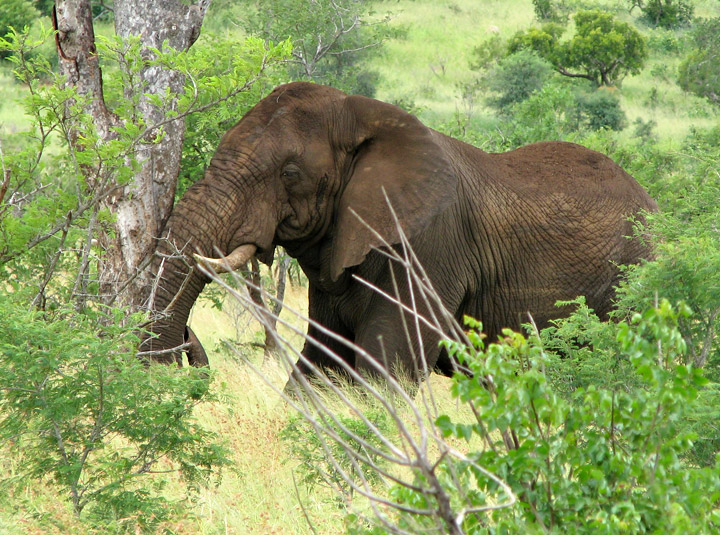 These animals typically ingest an average of 225 kg of vegetal matter daily, which is defecated without being fully digested. That, combined with the long distances that they can cover daily in search of more food, contributes notably to the dispersion of many plant seeds that germinate in the middle of a nutrient-filled feces mound. Elephants rip apart all kind of plants, and knock down trees with the tusks if they are not able to reach the tree leaves. In some national parks there is overpopulation, so that managers of overpopulated parks often contact other parks with fewer specimens to transfer excess individuals. 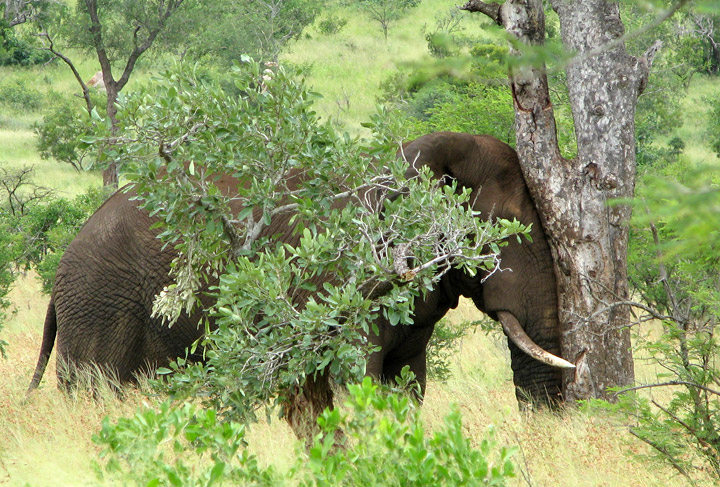 brushing against the tree

The African Bush Elephant is an intelligent animal. Experiments with reasoning and learning show that they are the smartest ungulates together with their Asian cousins. This is mostly due to their large brain. 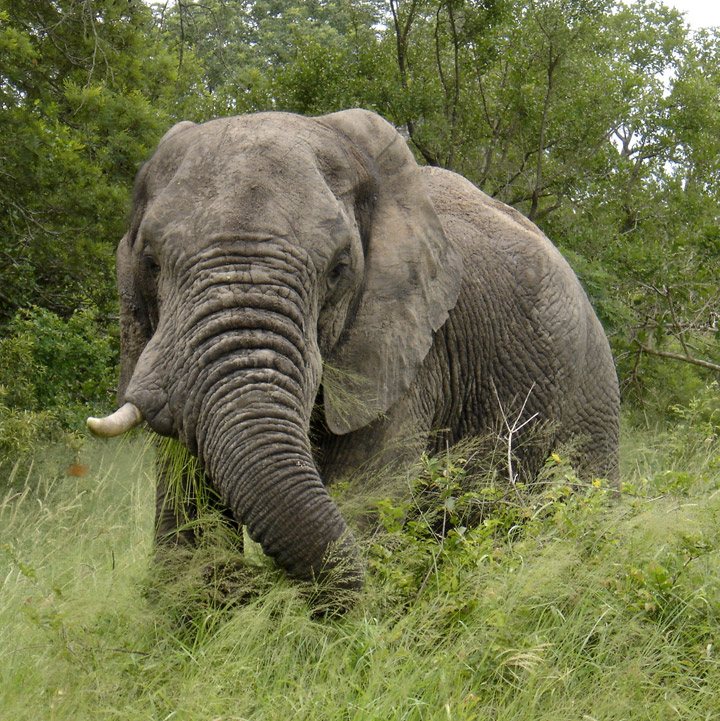 Herds are made up of related females and their young, directed by the eldest female, called the matriarch. Infrequently, an adult male goes with them, but those usually leave the pack when reaching adolescence to form herds with other elephants of the same age. Later, they spread out, carrying out a lonely life, approaching the female herds only during the mating season. Nevertheless, elephants do not get too far from their families and recognize them when re-encountered. Sometimes, several female herds can blend for a period of time, reaching even hundreds of individuals. 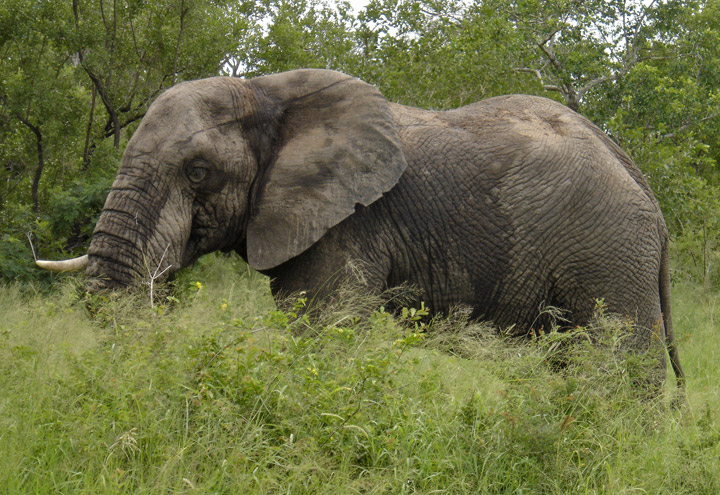 The matriarch is the one who decides the route and shows to each other member of the herd all the water sources she knows, which the rest will memorize in the future. The relations among the members of the herd is very tight; when a female gives birth to a baby the rest go to acknowledge it touching her with the trunk; and when an old elephant dies the rest of the herd will stay by the corpse for a while. The famous elephant graveyards are a myth, but it is true that these animals can recognize a carcass of its species when they find one during their trips, and even if it is a stranger, they form around it and sometimes they even touch its forehead with their trunk. 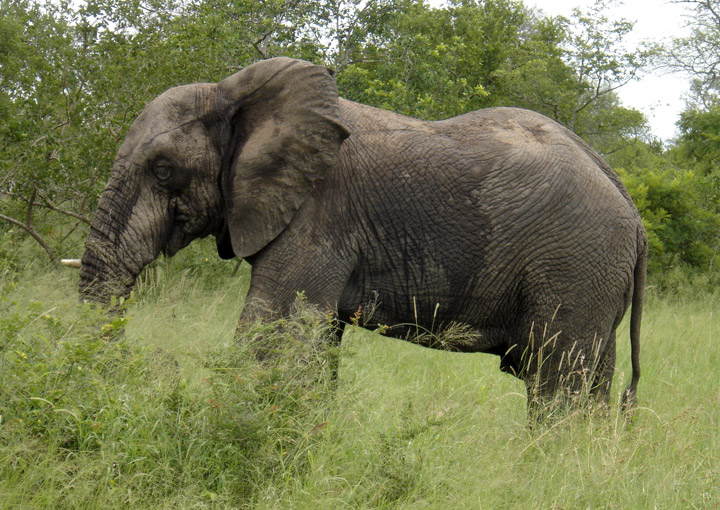 Mating happens when the female feels ready, an event that can occur anytime during the year. When she is ready, she starts emitting infrasound that attract the males, sometimes from kilometers away. The adult males start arriving at the herd during the following days and begin fighting, causing some injuries and even broken tusks. The female shows her acceptance of the victor by rubbing her body against his. They mate, and then both go their own way. After 22 months of gestation (the longest among mammals), the female gives birth to a single 90 cm high calf which weighs more than 100 kg. The baby feeds on the mothers milk until the age of 5, but also eats solid food from as early as 6 months old. Just a few days after birth the calf can follow the herd by foot. 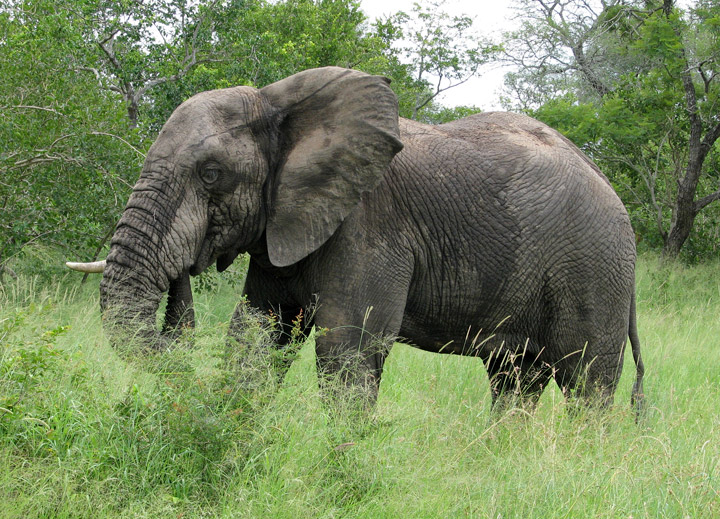 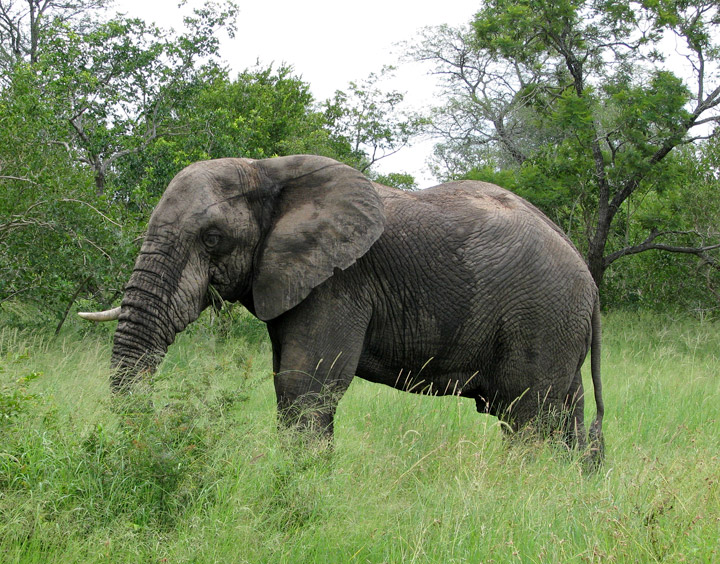 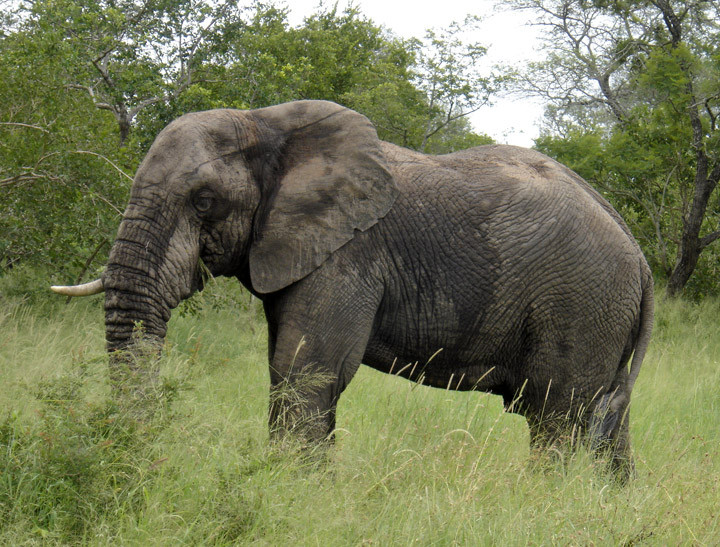 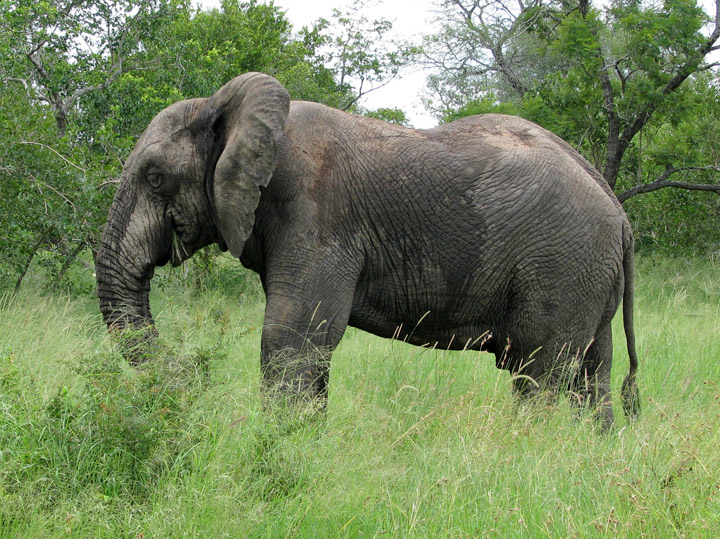 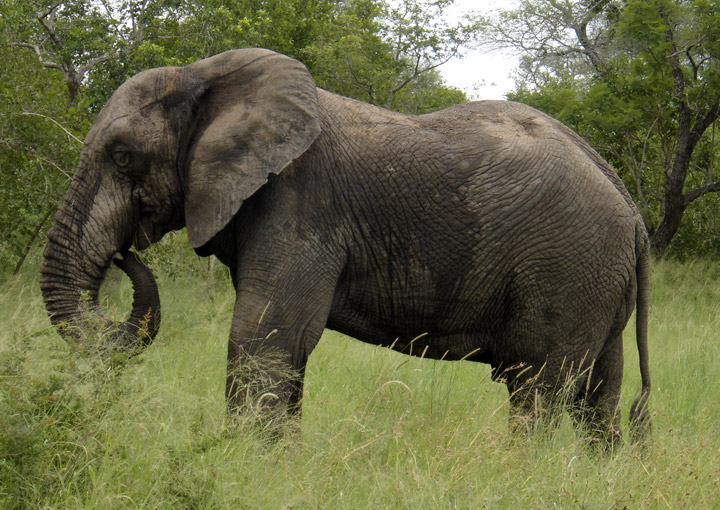 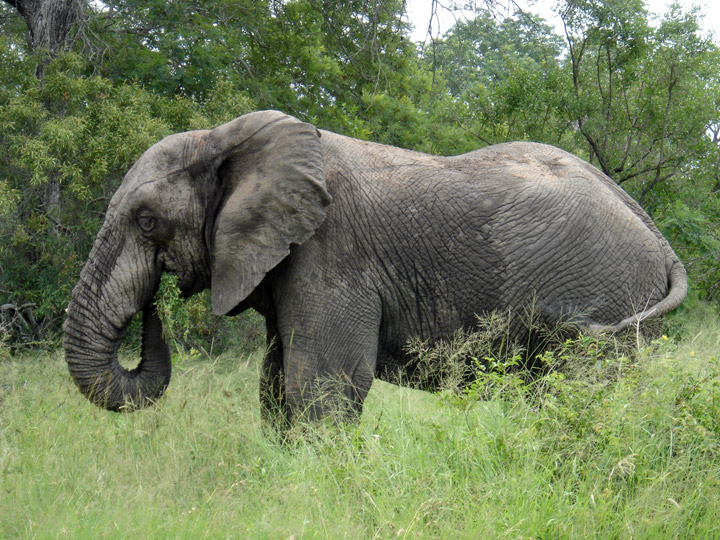 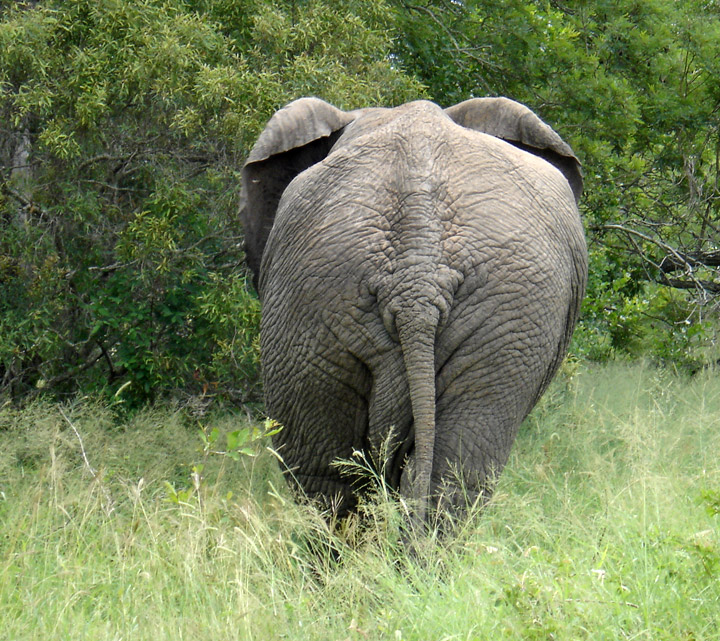