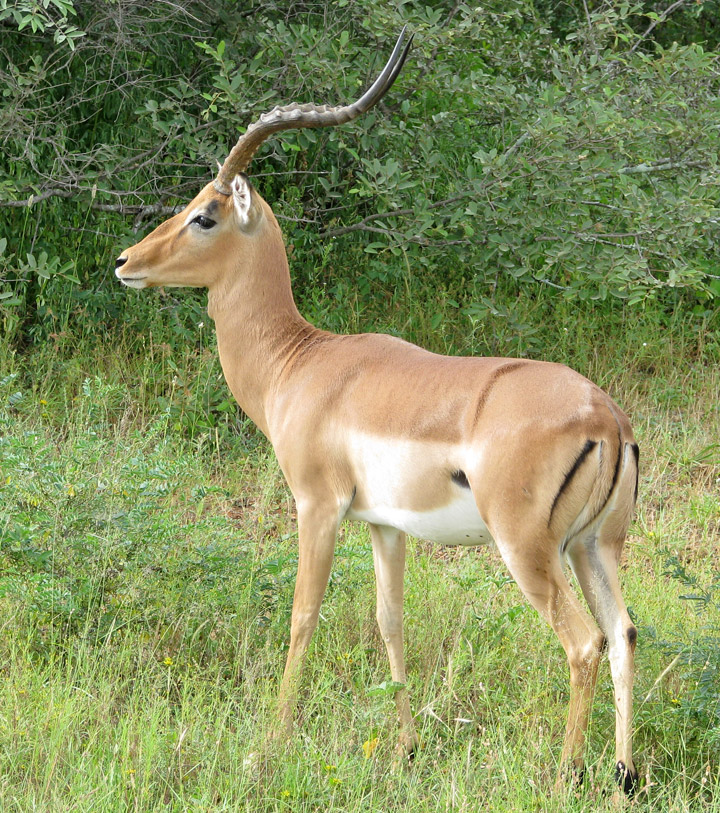 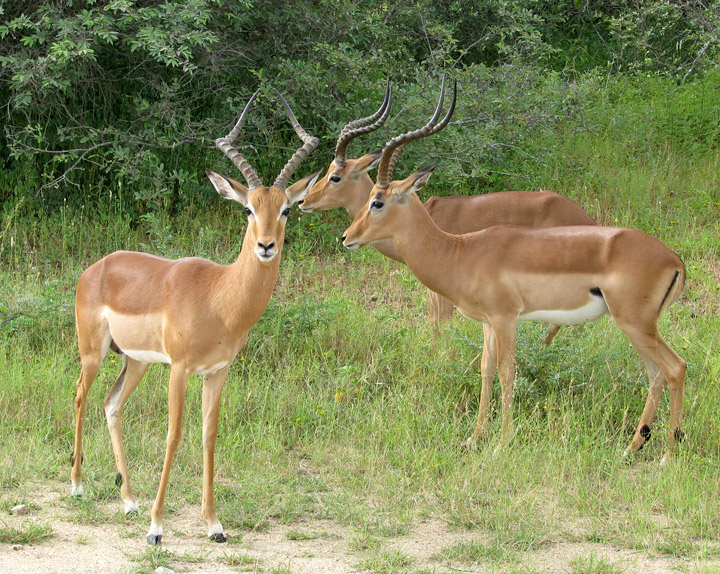 Average mass for an Impala is approximately 75 kilograms. They are reddish-brown in color with lighter flanks, have white underbellies and a characteristic "M" marking on its rear, which gives it the popular name "MacDonalds of the Bush. Males have lyre-shaped horns which can reach up to 90 centimeters in length. 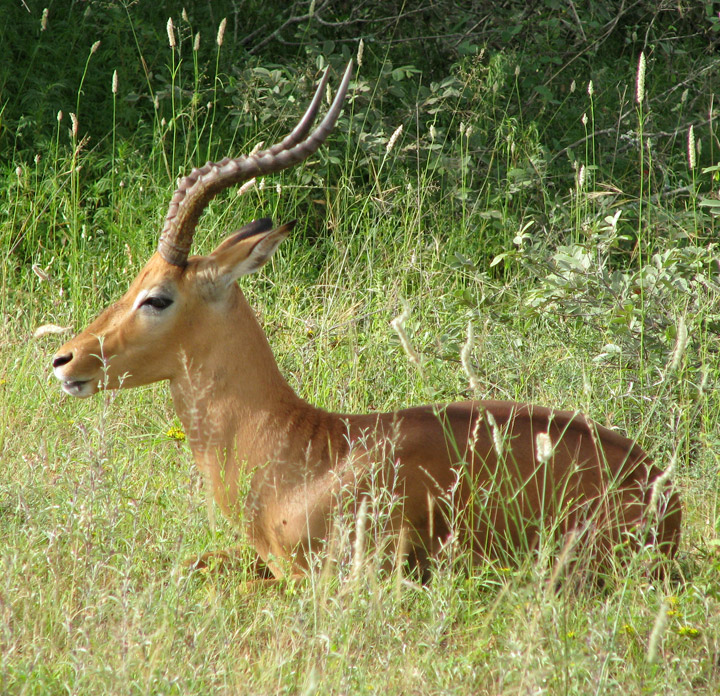 Impala are among the dominant species in many savannas. They can adapt to different environment by being grazers in some areas and browsers in others. They graze when the grass is green and growing and browse at other times. They will browse on formcsgaybs, shoots, seedpods and foliage. 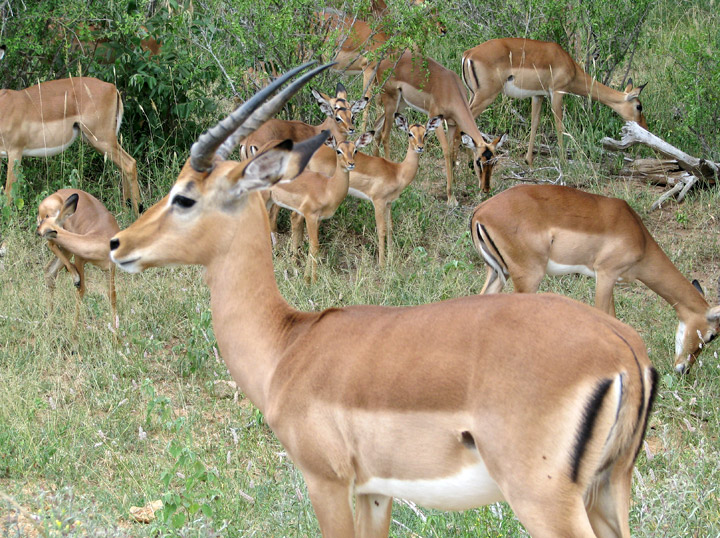 Herds will use specific areas for their excrement. Impala are active during both day and night and are dependent on water. A herd is normally an indicator of water close by. Impala can thrive in areas where pure grazers can not survive. 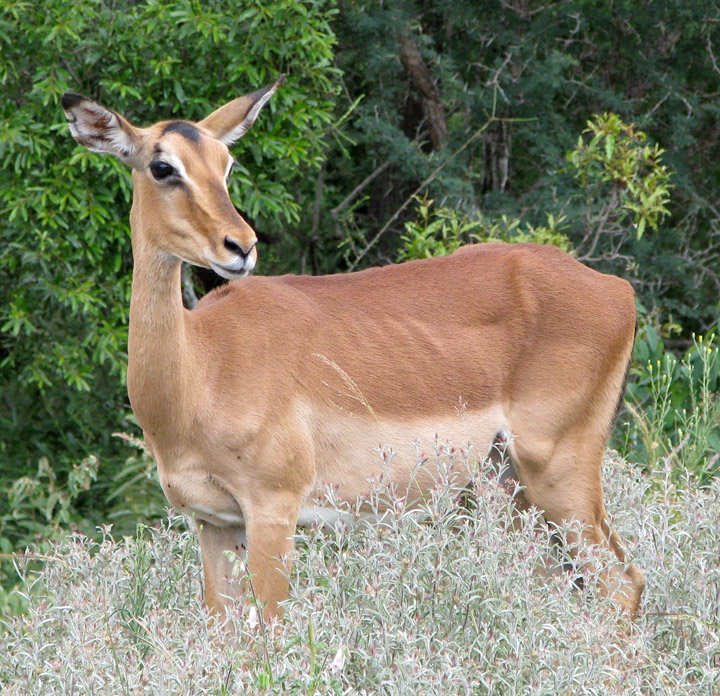 When frightened or startled the whole impala herd starts leaping about in order to confuse their predator. They can jump distances more than 9 meters (30 feet) and 2.5 meters (8 feet) high. Leopards, cheetah, Nile crocodiles, lions, spotted hyenas and wild dogs prey on impala. 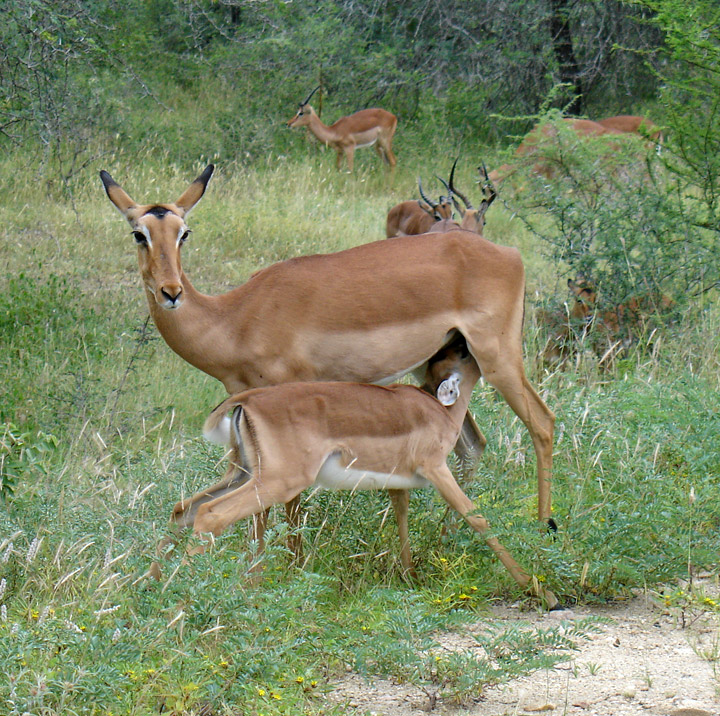 Females and young form herds of up to two hundred individuals. When food is plentiful, adult males will establish territories and round up any female herd that enter their grounds and will chase away bachelor males that follow. They will even chase away recently weaned males. A male impala tries to prevent any female from leaving is territory. During the dry seasons, territories are abandoned as herds must travel farther to find food. Large, mixed tranquil herds of females and males form. 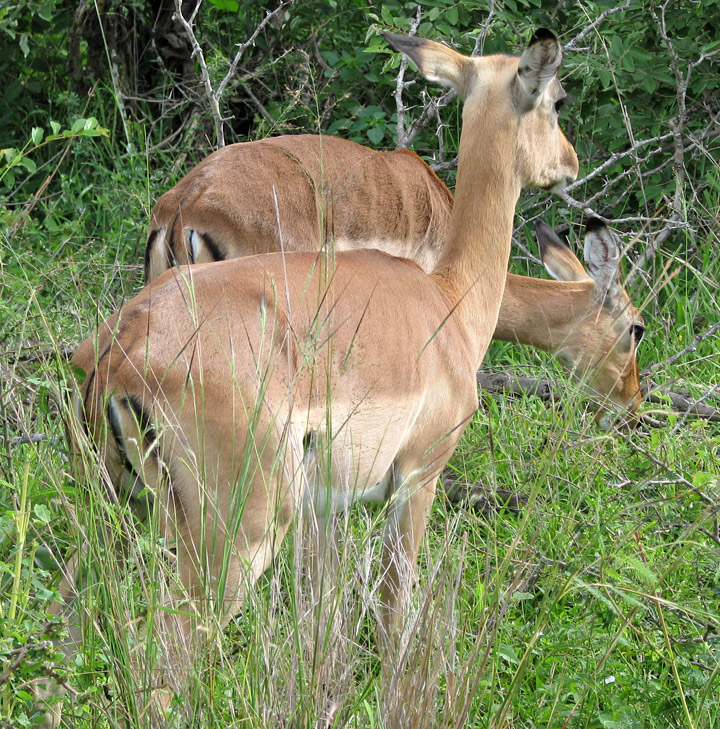 Young male impala who have been made to leave their previous herd form bachelor herds of around thirty individuals. Males that are able to dominate their herd are contenders for assuming control of their territory. 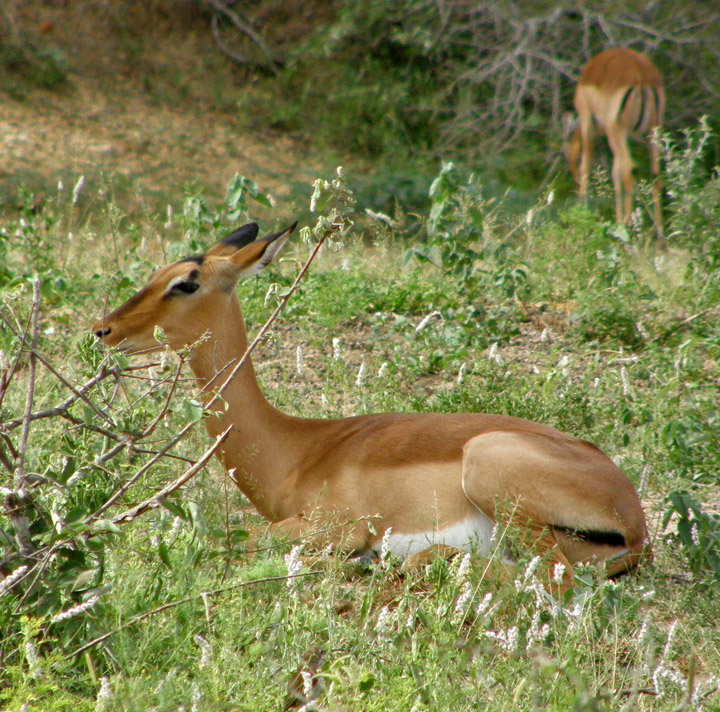 The breeding season of impala, also called rutting, begins toward the end of the wet season in May. The entire affair typically lasts approximately three weeks. While young are born after seven months, the mother has the ability to prolong giving birth for an additional month if conditions are harsh. When giving birth a female impala will isolate herself from the herd despite numerous attempts by the male to keep her in his territory. The impala mother will keep the fawn in an isolated spot for a few days or even leave it lying out in hiding for a couple days, weeks, or more before returning to the herd. There the fawn will join a nursery group and will go to its mother only to nurse and when predators are near. Fawns are suckled for 4 to 6 months. Males who mature are forced out of the group and will join bachelor herds. 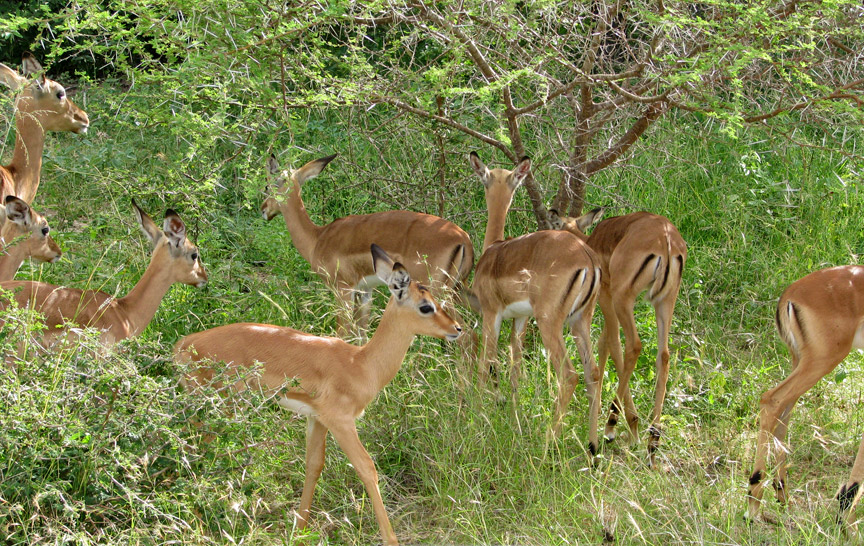 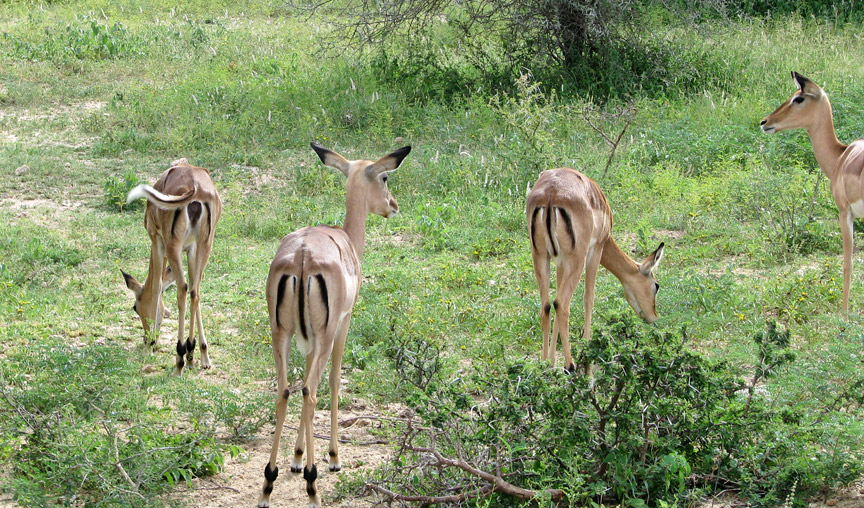 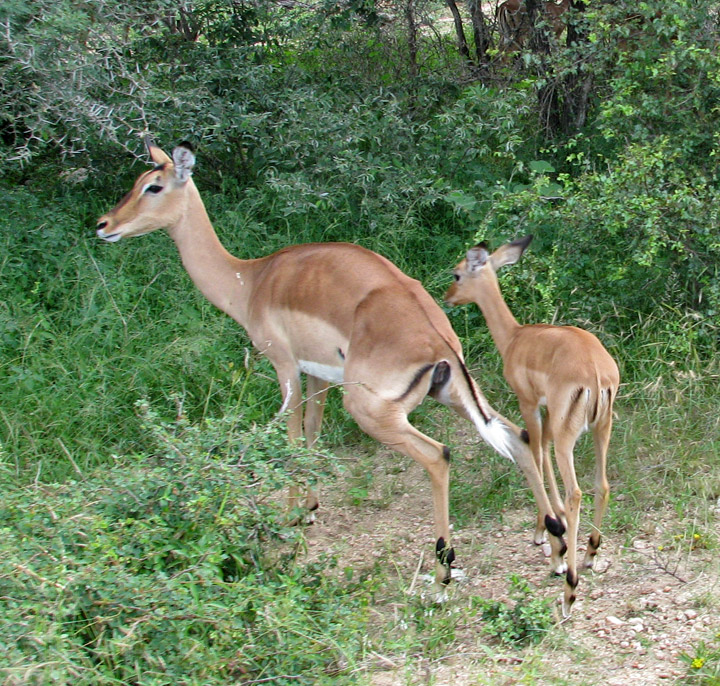 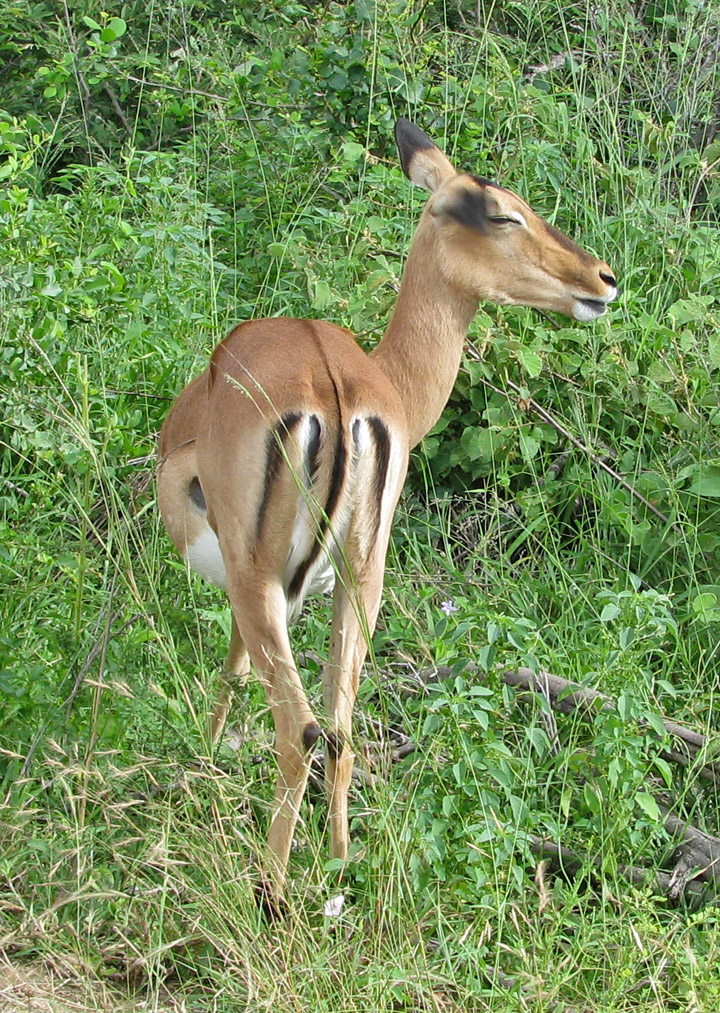 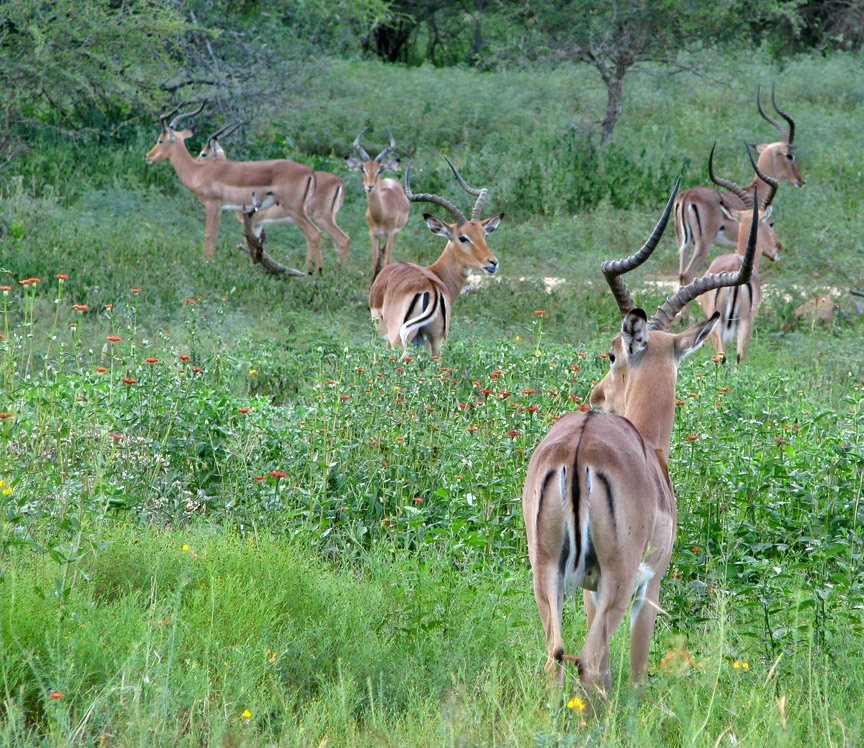 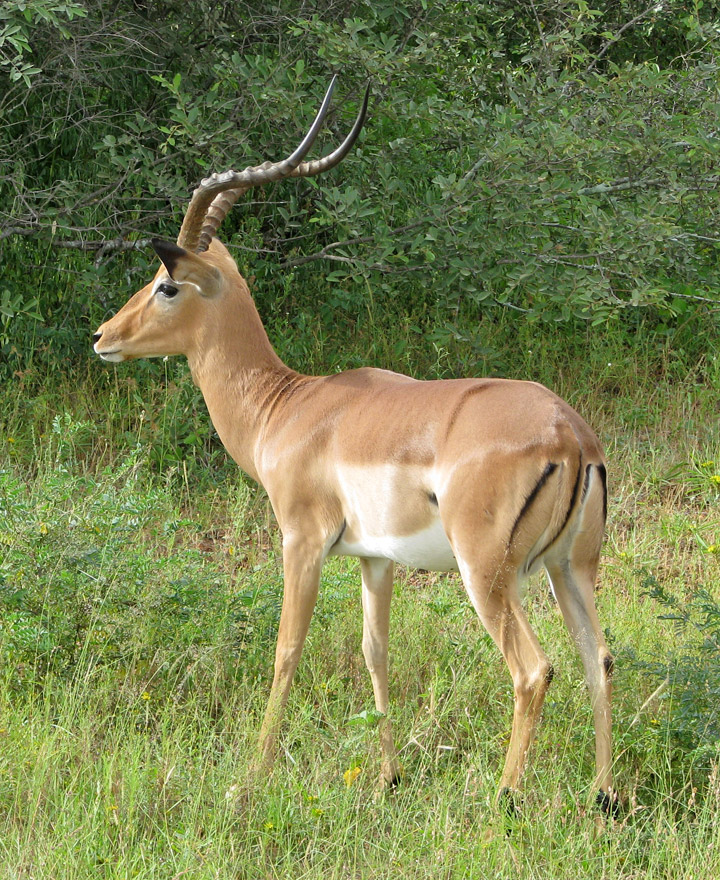 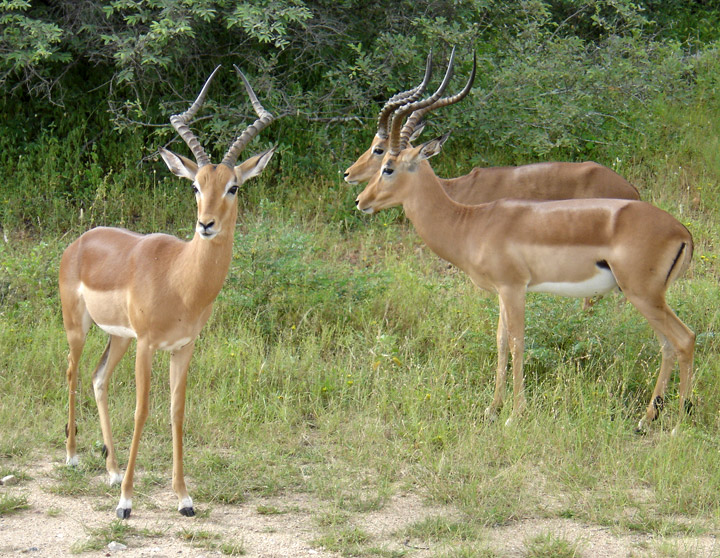