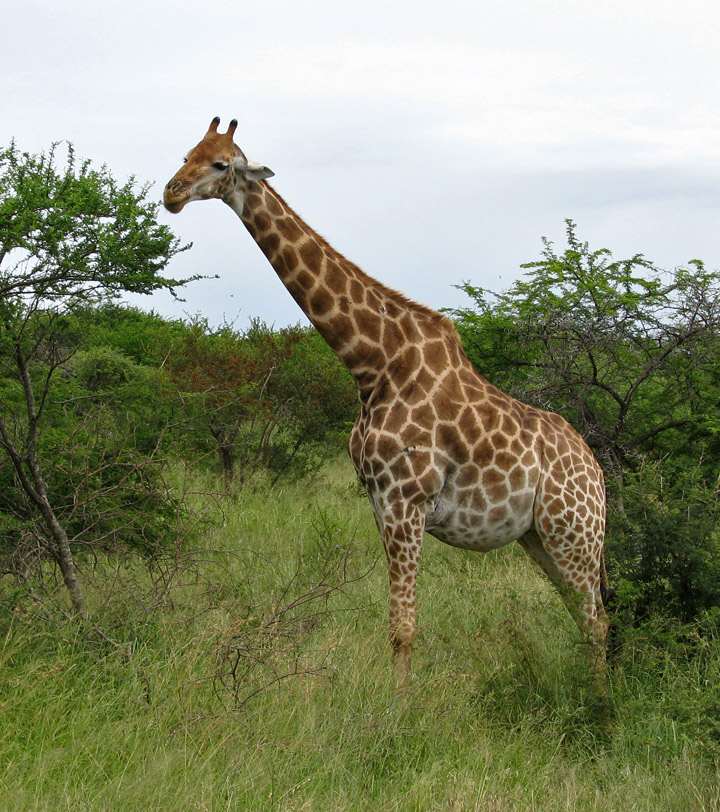 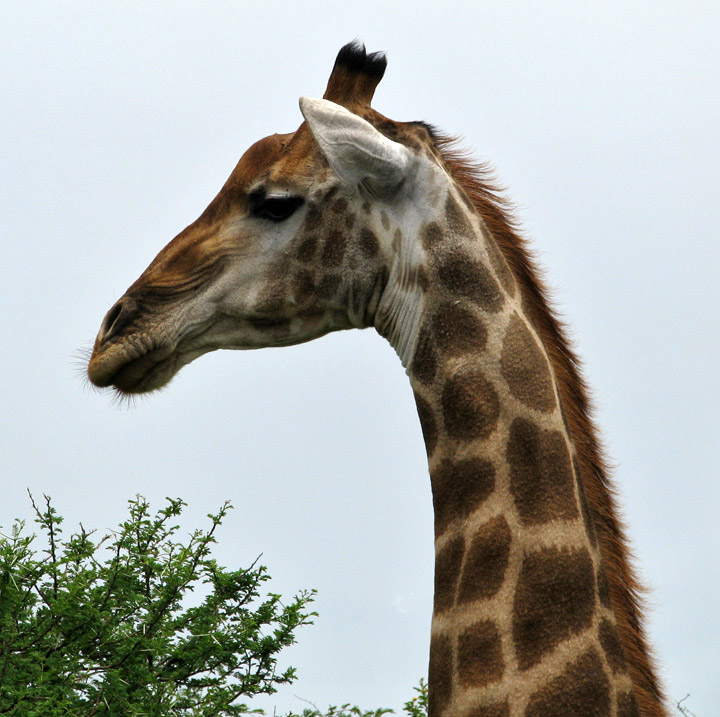 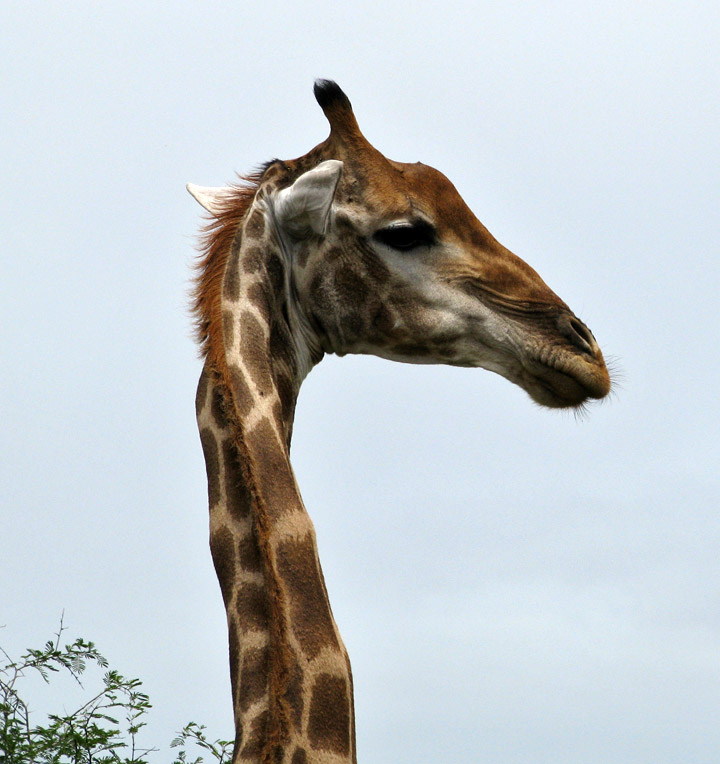 twisted to the right

The giraffe is related to deer and cattle, but is placed in a separate family, the Giraffidae, consisting only of the giraffe and its closest relative, the okapi. Its range extends from Chad to South Africa. 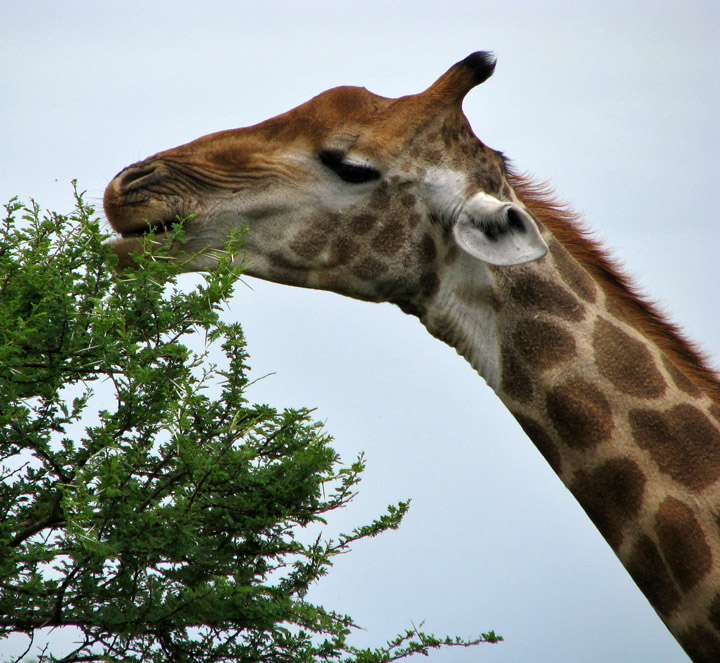 eating from the top of the tree

Giraffes can inhabit savannas, grasslands, or open woodlands. They prefer areas enriched with acacia growth. They drink large quantities of water and, as a result, they can spend long periods of time in dry, arid areas. When searching for more food they will venture into areas with denser foliage. 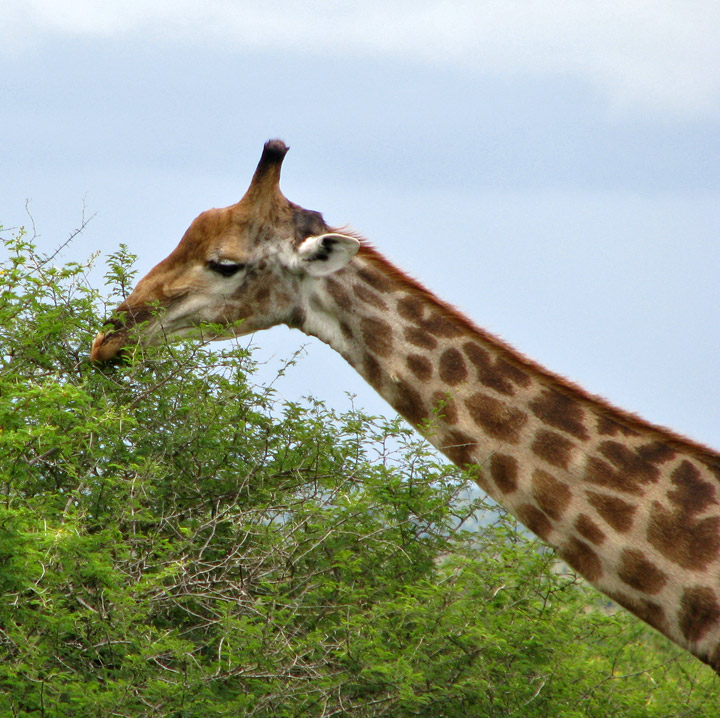 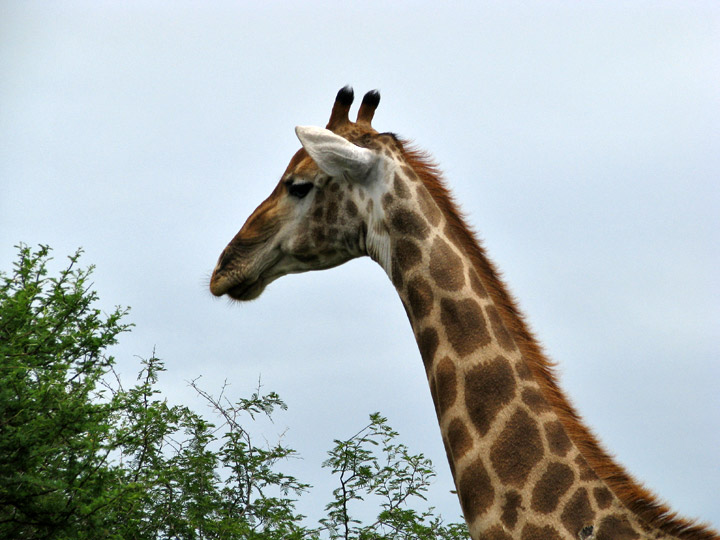 Both sexes have horns, although the horns of a female are smaller. The prominent horns are formed from ossified cartilage and are called ossicones. The appearance of horns is a reliable method of identifying the sex of giraffes, with the females displaying tufts of hair on the top of the horns, where as males' horns tend to be bald on top — an effect of necking in combat. Males sometimes develop calcium deposits which form bumps on their skull as they age, which can give the appearance of up to three further horns. 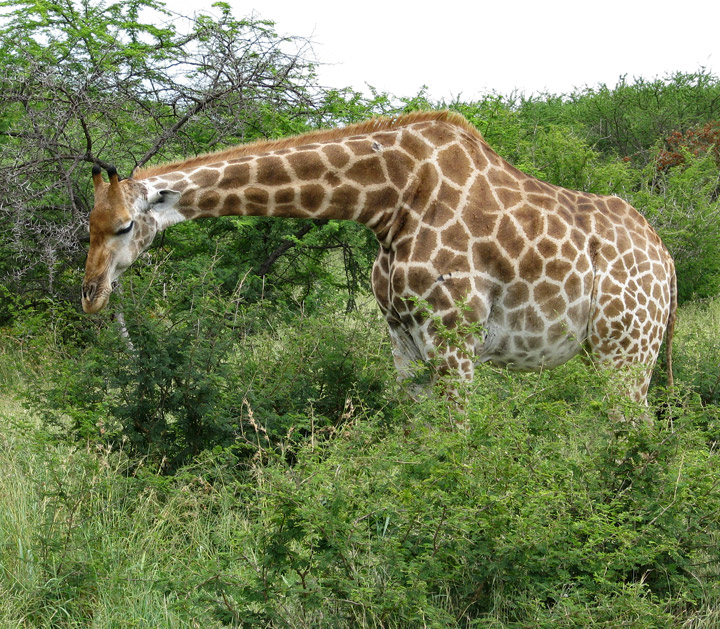 Giraffes have long necks, which they use to browse the leaves of trees. They possess seven vertebrae in the neck (the usual number for a mammal) that are elongated. The vertebrae are separated by highly flexible joints. The base of the neck has spines which project upward and form a hump over the shoulders. They have anchor muscles that hold the neck upright. 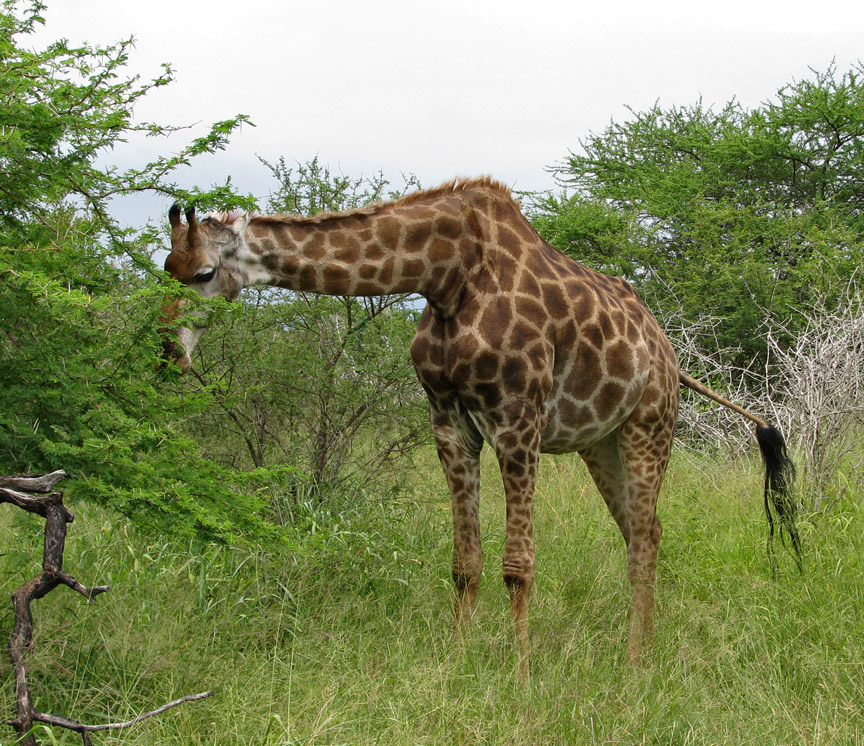 Giraffes also have slightly elongated forelegs, about 10% longer than their hind legs. The pace of the giraffe is an amble, though when pursued it can run extremely fast. It can not sustain a lengthy chase. Its leg length compels an unusual gait with the left legs moving together followed by right (similar to pacing) at low speed, and the back legs crossing outside the front at high speed. When hunting adult giraffes, lions try to knock the lanky animal off its feet and pull it down. Giraffes are difficult and dangerous prey though, and when attacked the giraffe defends itself by kicking with great force. A single well-placed kick from an adult giraffe can shatter a lion's skull or break its spine. Lions are the only predators which pose a serious threat to an adult giraffe. 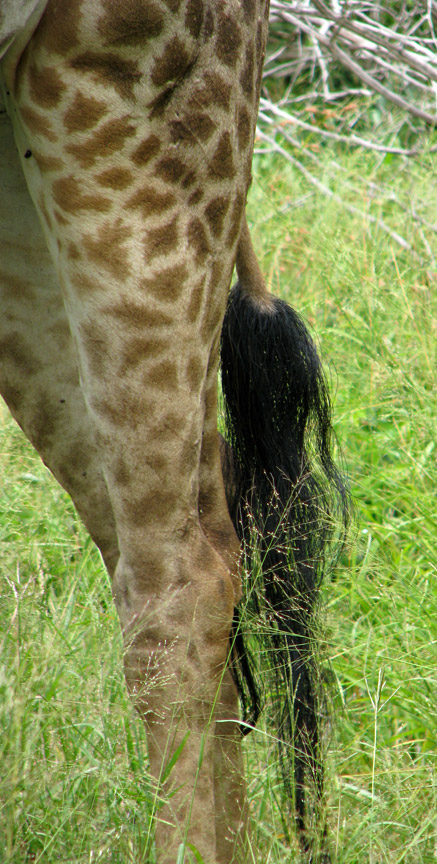 Modifications to the giraffe's structure have evolved, particularly to the circulatory system. A giraffe's heart, which can weigh up to 10 kg (22 lb) and measure about 60 cm (2 ft) long, has to generate around double the normal blood pressure for an average large mammal in order to maintain blood flow to the brain against gravity. In the upper neck, a complex pressure-regulation system called the rete mirabile prevents excess blood flow to the brain when the giraffe lowers its head to drink. Conversely, the blood vessels in the lower legs are under great pressure (because of the weight of fluid pressing down on them). In other animals such pressure would force the blood out through the capillary walls; giraffes, however, have a very tight sheath of thick skin over their lower limbs which maintains high extravascular pressure in exactly the same way as a pilot's g-suit. 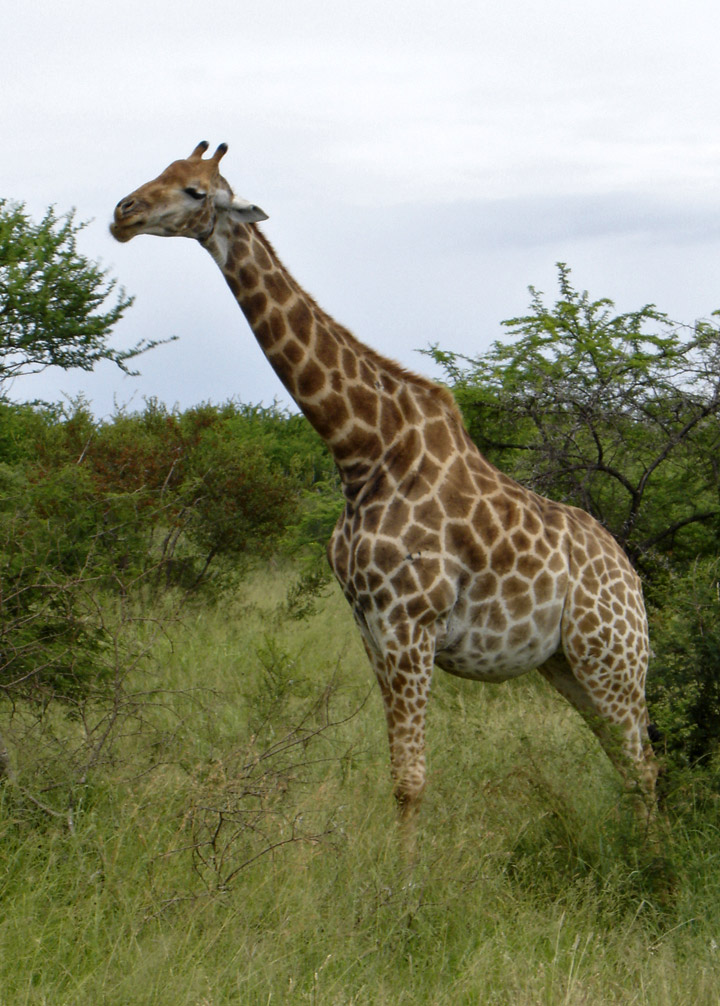 Female giraffes associate in groups of a dozen or so members, occasionally including a few younger males. Males tend to live in "bachelor" herds, with older males often leading solitary lives. Reproduction is polygamous, with a few older males impregnating all the fertile females in a herd. Male giraffes determine female fertility by tasting the female's urine in order to detect estrus, in a multi-step process known as the flehmen response. 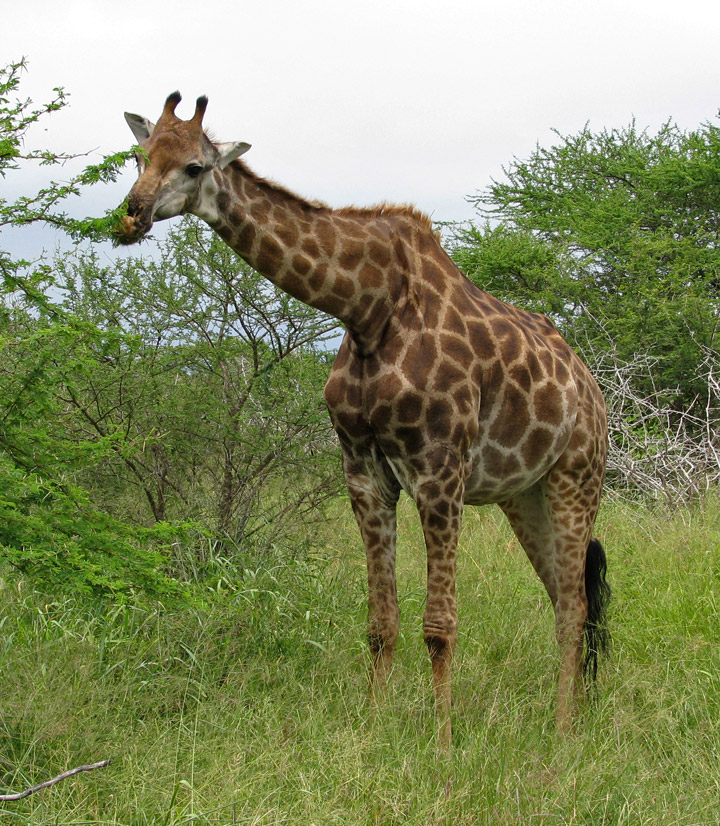 Giraffes will mingle with the other herbivores in the African bush. They are beneficial to be around because of their height. A giraffe is tall enough to have a much wider scope of an area and will watch out for predators. 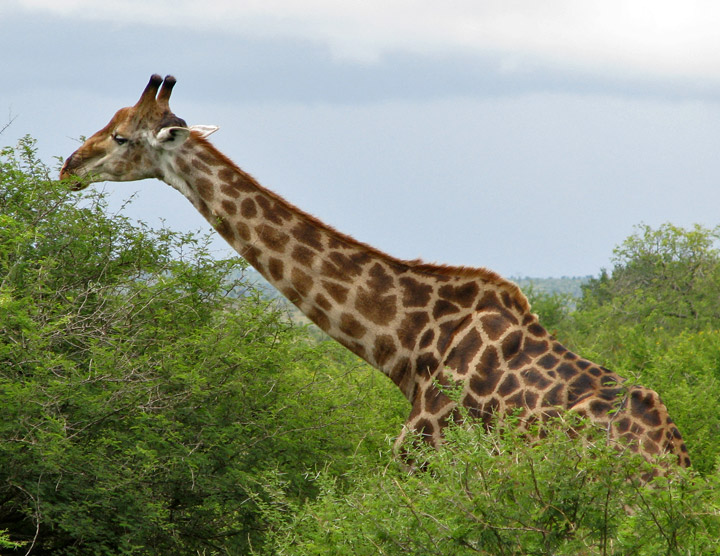 Giraffe gestation lasts between 14 and 15 months, after which a single calf is born. The mother gives birth standing up and the embryonic sack usually bursts when the baby falls to the ground. Newborn giraffes are about 1.8 m (6 ft) tall. Within a few hours of being born, calves can run around and are indistinguishable from a week-old calf; however, for the first two weeks, they spend most of their time lying down, guarded by the mother. The young can fall prey to lions, leopards, spotted hyenas, and wild dogs. It has been speculated that their characteristic spotted pattern provides a certain degree of camouflage. Only 25 to 50% of giraffe calves reach adulthood; the life expectancy is between 20 and 25 years in the wild and 28 years in captivity (Encyclopedia of Animals). 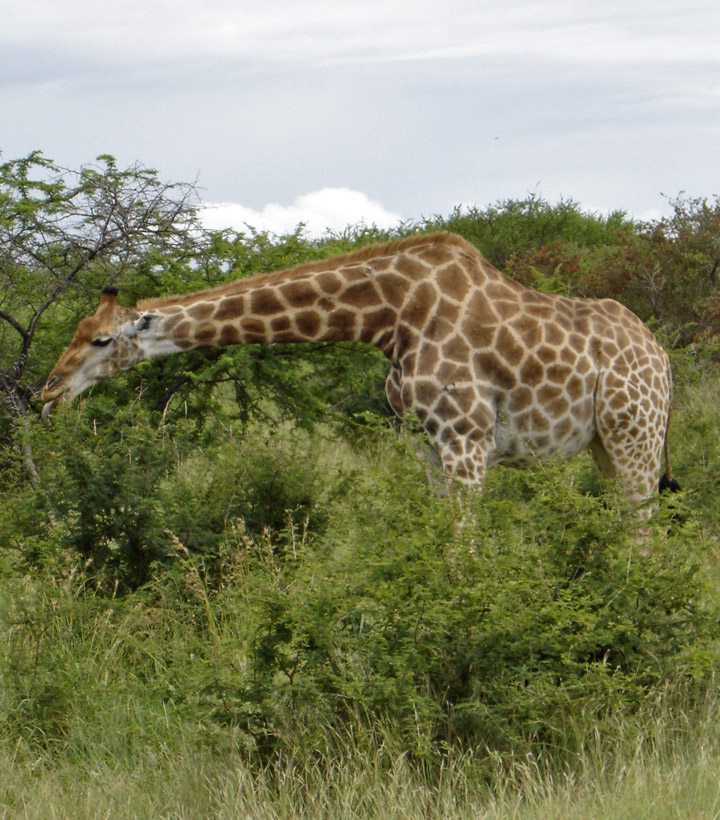 As noted above, males often engage in necking, which has been described as having various functions. One of these is combat. Battles can be fatal, but are more often less severe. The longer the neck, and the heavier the head at the end of the neck, the greater the force a giraffe is able to deliver in a blow. It has also been observed that males that are successful in necking have greater access to estrous females, so the length of the neck may be a product of sexual selection. 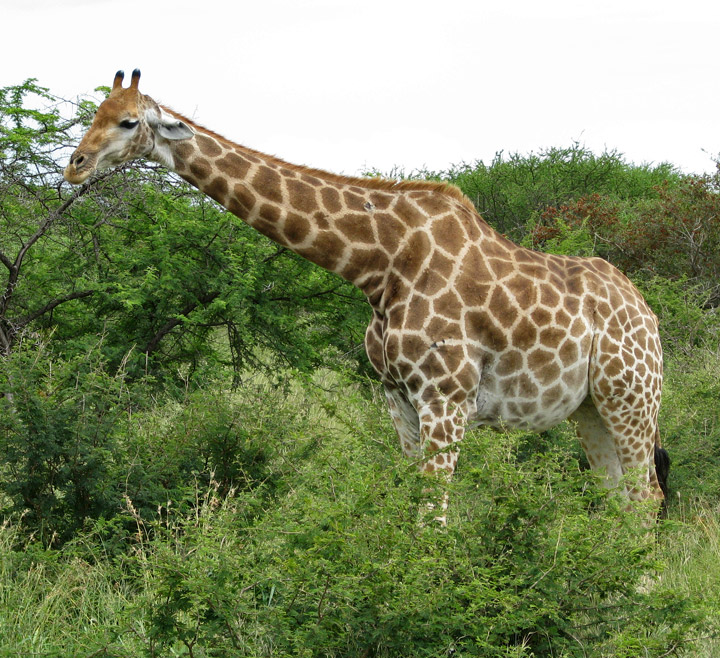 After a necking duel, a giraffe can land a powerful blow with his head — occasionally knocking a male opponent to the ground. These fights rarely last more than a few minutes or end in physical harm. 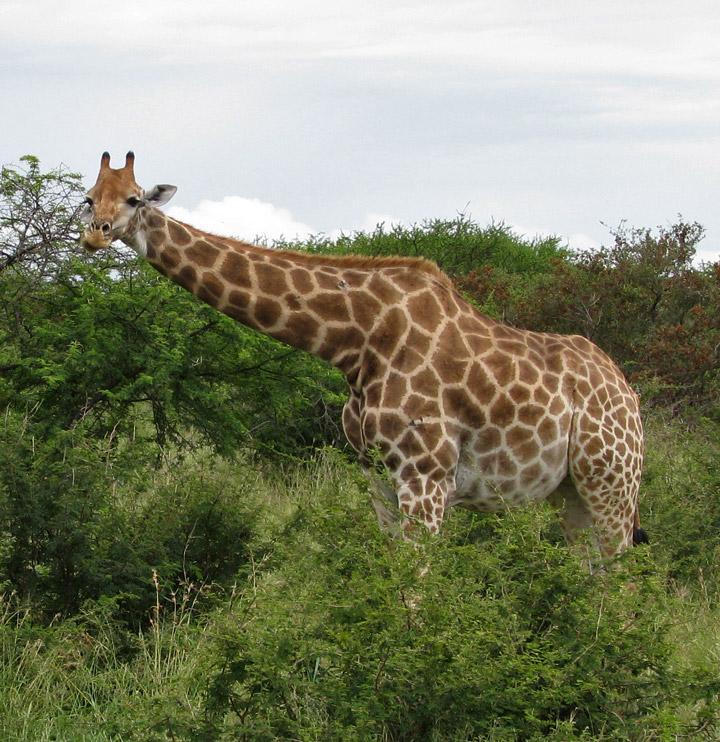 Another function of necking is affectionate and sexual, in which two males will caress and court each other, leading up to mounting and climax. Same sex relations are more frequent than heterosexual behavior. In one area 94% of mounting incidents were of a homosexual nature. The proportion of same sex courtships varies between 30 and 75%, and at any given time one in twenty males will be engaged in affectionate necking behavior with another male. Females, on the other hand, only appear to have same sex relations in 1% of mounting incidents.