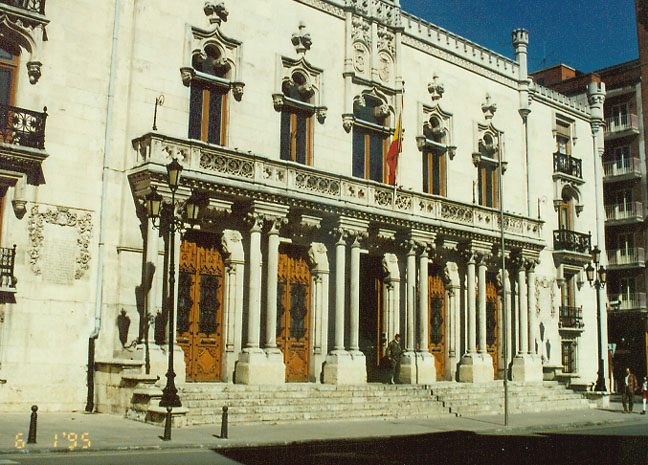 Burgos, a city in Castilla-Leon situated in the Pilgrim's Road to Santiago de Compostela, still preserves important vestiges of its medieval splendour. The city, which was the capital of the unified kingdom of Castilla-Leon for five centuries, boasts a masterpiece of Spanish Gothic architecture: the cathedral of Burgos, declared World Heritage. Aside from a visit to the historic quarter, we can take a quite interesting walk along the banks of the Duero and Arlanza rivers. Great places to approach a delicious, varied cuisine.

The city of Burgos, crossed by the Arlanzón River, is a few kilometres away from the prehistoric site of Atapuerca, which was declared World Heritage. A military hamlet in its origins, the city slowly became a powerful commercial city in the Middle Ages. A critical factor in this development was that Burgos was the capital of the unified kingdom of Castilla-Leon between the 10th and 15th centuries; its privileged location on the Pilgrim's Road to Santiago de Compostela, and the monopoly it held over the trade of merino wool, also contributed. All that splendour left a profound mark on present-day Burgos. 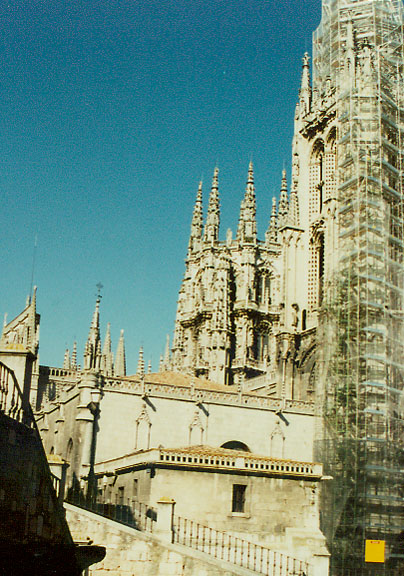 On the foothill of the fortified Castle Hill, which has the best views of the city, the medieval quarter unfolds. Some of the remarkable buildings of this place include the Mudejar Arch of San Esteban, and the Gothic church by the same name, which houses the Reredos Museum. Another important temple is the one devoted to San Nicolás, where we can see a magnificent polychromatic alabaster reredos. 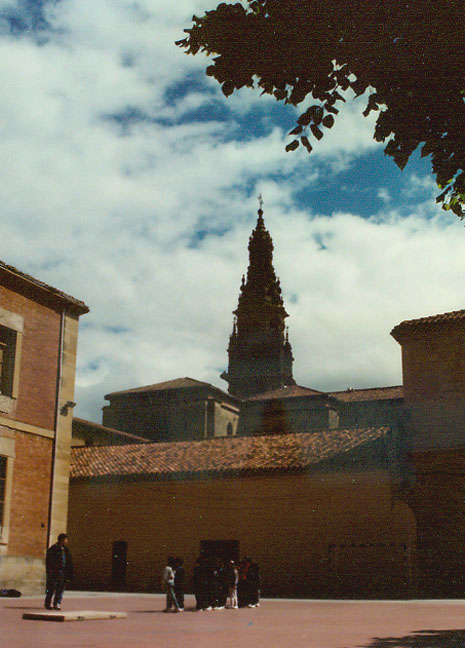 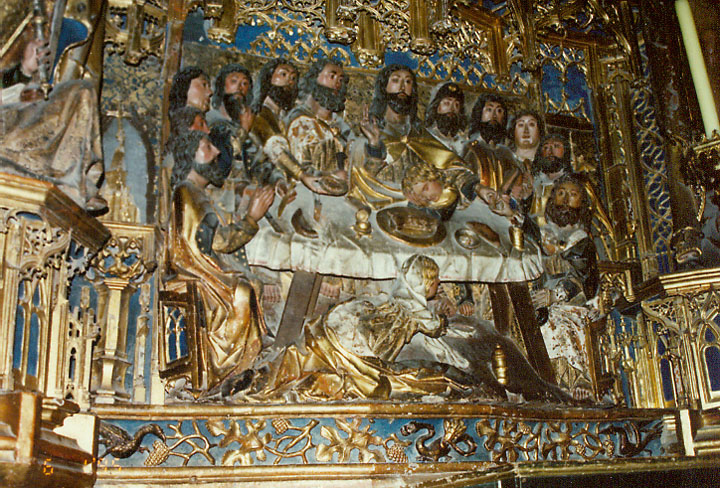 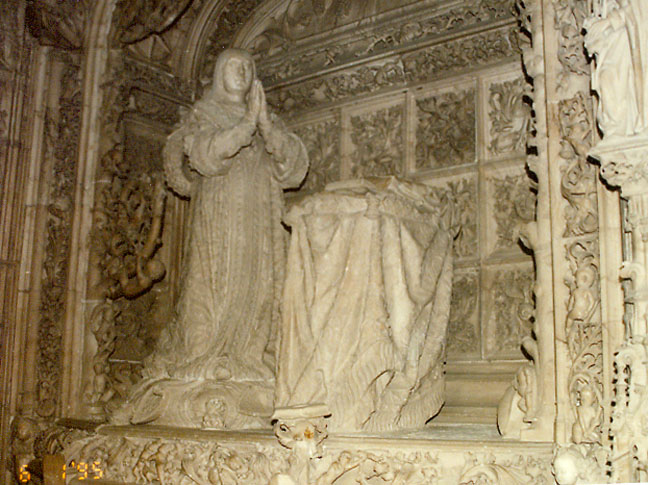 the Saint at prayer 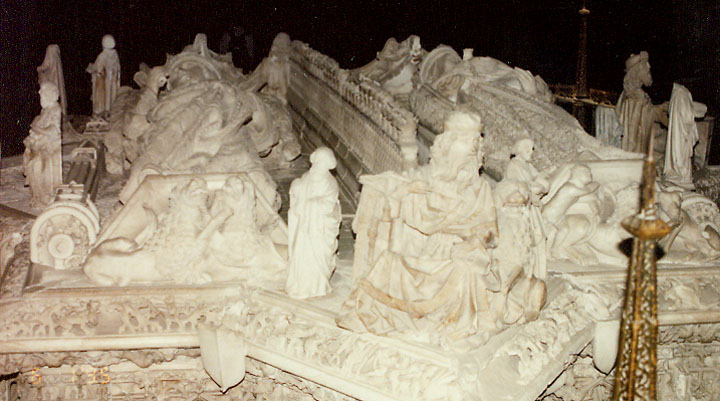 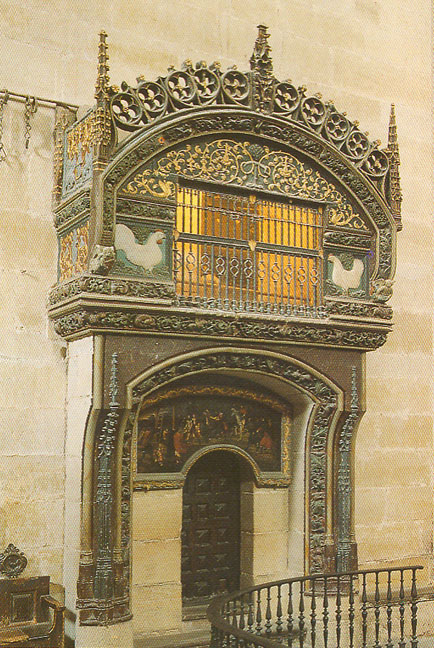 THE MIRACLE OF THE COCK AND HEN

Tradition tells that, among the many pilgrims to Santiago de Compostela who stopped in this city to venerate the reliquaries of Santo Domingo de la Calzada, there was a married couple from Da Santis, in the Archbishopric of Cologne, with their eighteen year old son, Hugonell.  The girl at the inn where they stayed fell in love with the youth but, in the light of his indifference, decided to take her revenge. She put a silver cup in his luggage and, when they went on, she denounced the robbery to the Corregidor.  The laws of the time (the Jurisdiction of Alfonso X  El Sabio) punished the crime of robbery with death and, once caught and judged, the innocent pilgrim was hanged.  When his parents left for Santiago de Compostela, they went to see their hanged offspring and, when they came to the place, they heard his voice telling them that “Santo Domingo de Ia Calzada” had saved his life. They went straight to the house of the city’s Corregidor and told him of the miracle.  Incredulous, the Corregidor replied that their son was about as alive as the roast cock and hen he was about to eat.  At that very moment, the cock and hen became covered in feathers and leaped from the plate and began to crow.  Since then, these famous lines have been said:

In memory of this event, a live cock and hen, always white, are kept throughout the year: they are donated, and changed every month. Opposite this niche, which was built to commemorate this miracle, and under the window, there is a piece of wood from the gallows on which tie pilgrim was hanged.  The first reference to the cock and hen is in a document dating from 1350. in the Cathedra Archive.

But beyond all doubt, the architectural masterpiece of Burgos is the cathedral, declared World Heritage Site by UNESCO. Erected on top a Romanesque temple, the cathedral was built following a Norman French Gothic model. The filigree work in the spires of the towers, and in the exterior of the High Constable Chapel, are some of the masterpieces found in this cathedral. Such beauty and incredible genius lead to a long list of exceptional works of art in its interior. These include the starry dome that covers the tombs of El Cid and Doña Jimena, the choir, the sarcophagi, and the Golden Staircase, built by Spanish architect and sculptor Diego de Siloé, a prominent figure during the Spanish Renaissance. 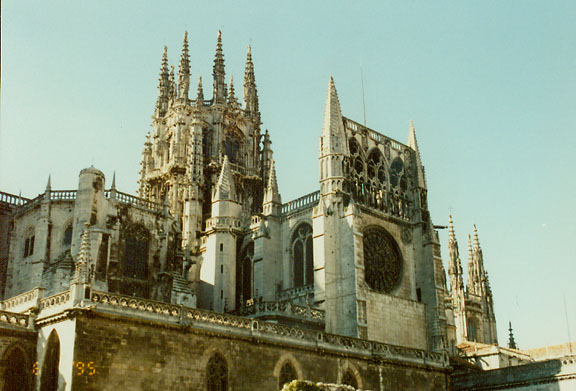 Beautiful examples of civil architecture include Casa de Miranda, which houses the Burgos Museum, with an important collection of archaeologic artefacts, and Casa de Angulo, which houses the Museum of Fine Arts. The most remarkable house, however, is Casa del Cordón, where the Catholic Monarchs received Christopher Columbus after he returned from his second trip to the New World. 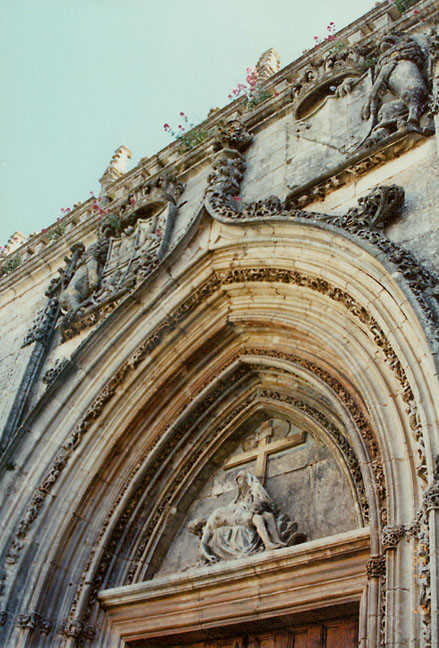 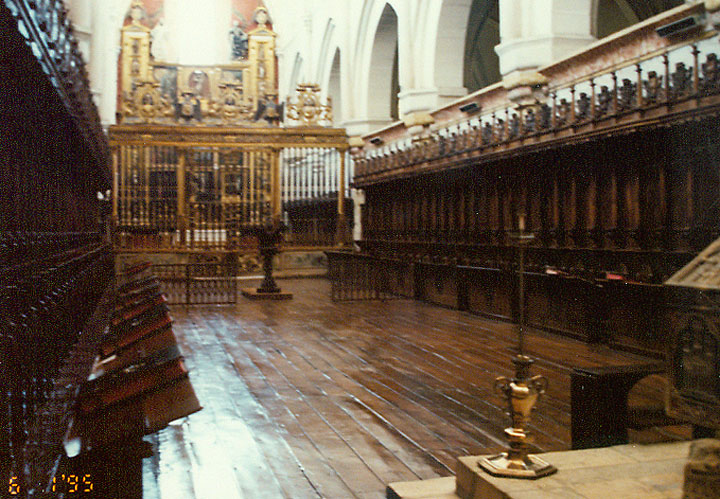 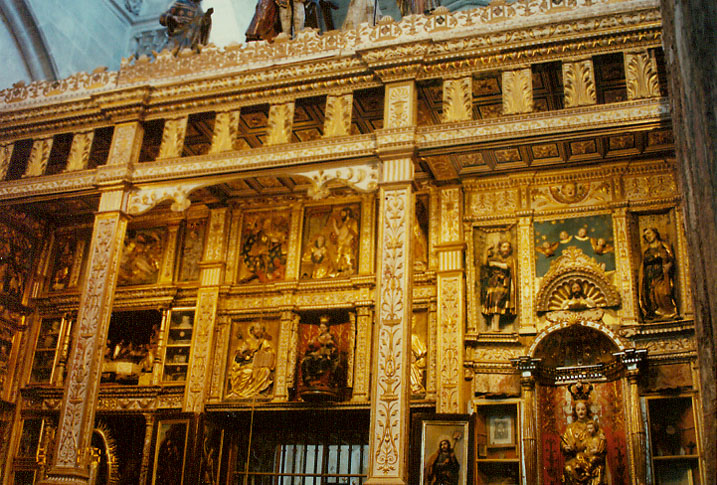 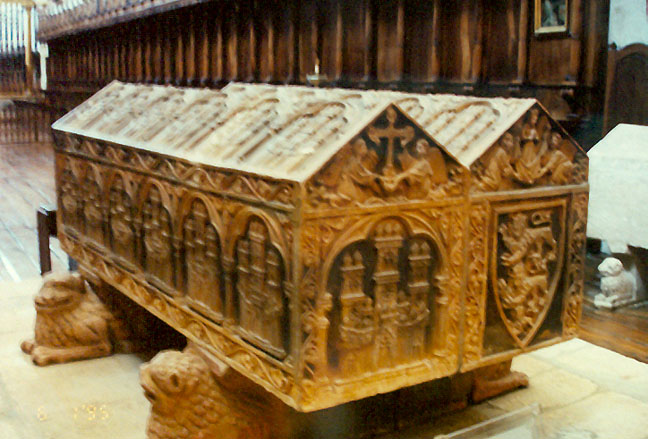 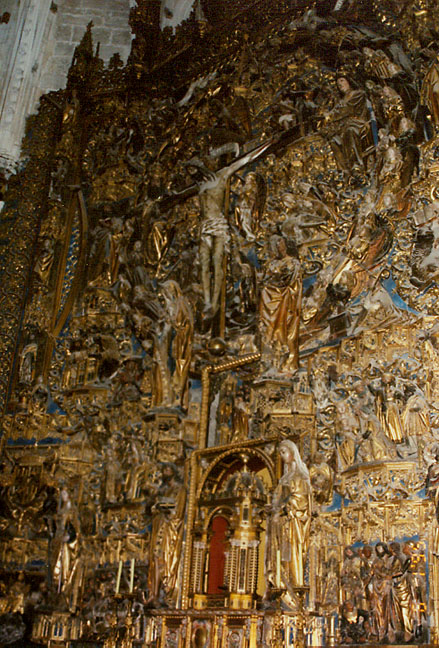 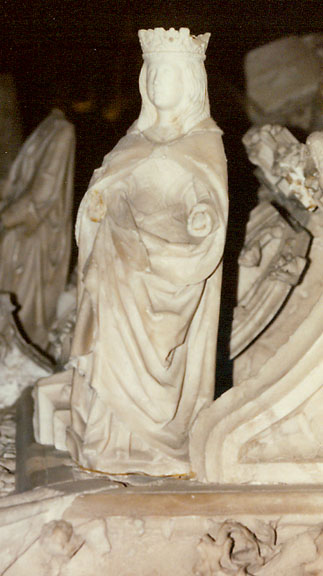 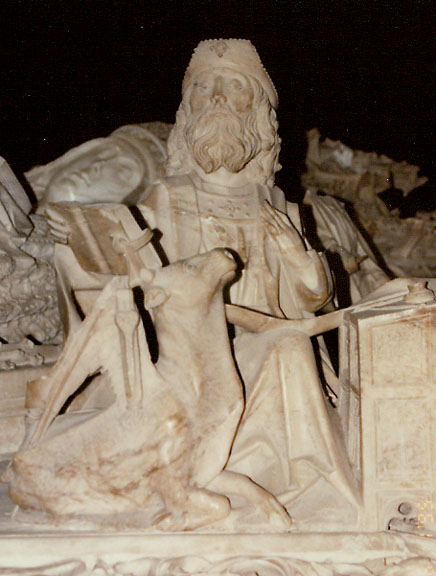 tomb figures with a lamb 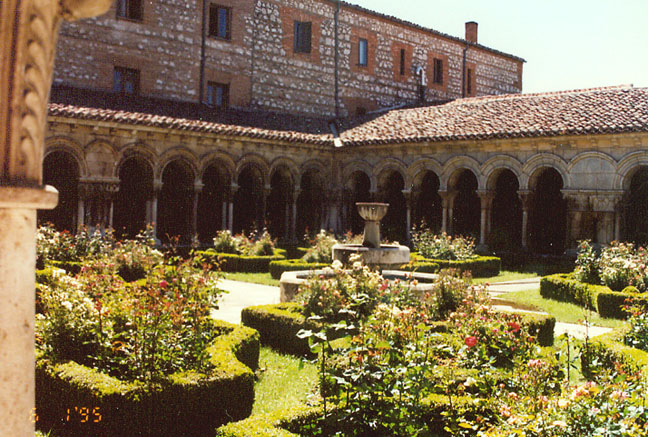 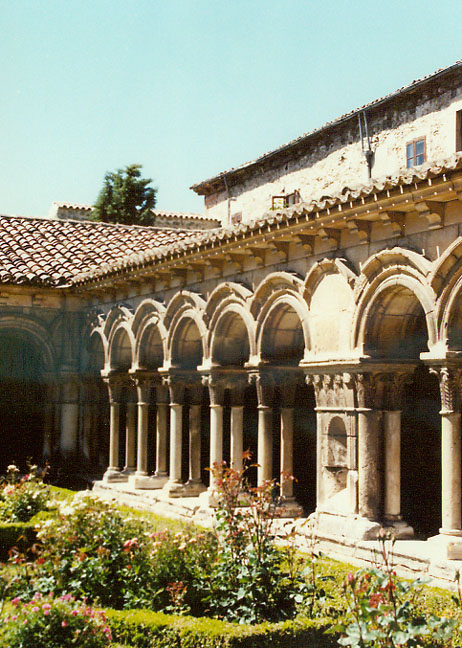 To both ends of the historic quarter of Burgos we find important buildings. In the west end lays the Royal Monastery of Huelgas Reales, with an impressive Gothic cloister, and the famous Chapel of Saint James the Apostle. Next to it is the Museo de Ricas Telas, a textile museum that exhibits, among other things, the historic banner that was snatched from the Arabs in the Battle of Navas de Tolosa, in 1212. East of the capital, in the Carthusian monastery of Miraflores we find an amazing polychromatic reredos, among other works of art. The legend is that this reredos was plated with the first shipment of gold that arrived after the Discovery of America.

The privileged location of the capital of Burgos lets the visitor cover the whole province by following interesting routes to the heart of Castilla-Leon. One of these routes goes from Burgos along the bank of the Arlanza River, unveiling medieval churches and convents, feudal castles, and Renaissance palaces. These authentic gems of the architecture of Burgos are located in towns such as Lerma, Santo Domingo de Silos, and Quintanilla de las Viñas. 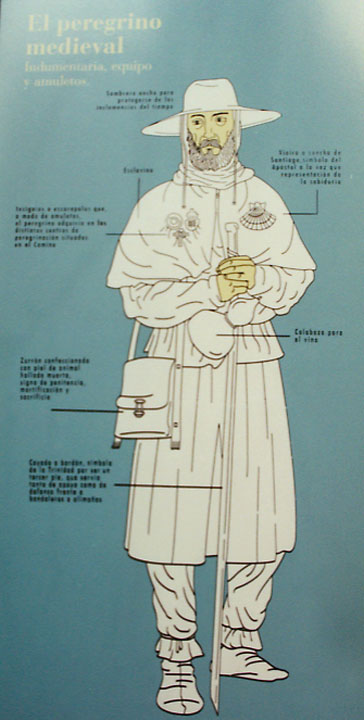 The Pilgrim's Road to Santiago de Compostela, declared World Heritage, goes across the province of Burgos. It consists of an artistic and cultural route lined with churches, hermitages, and pilgrim hospitals, along the towns of Belorado, Villafranca Montes de Oca, and Castrogeriz. 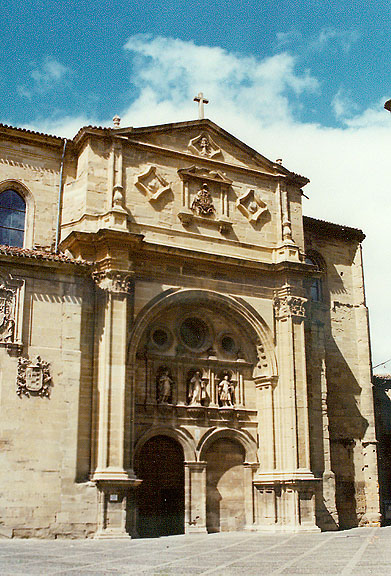 Ribera del Duero, the birthplace of one of the most acclaimed Designations of Origin for wine, surprises the visitor with beautiful historic towns. Aranda, Peñaranda, and Roa (all within the region of Duero) exhibit Gothic relieves, Renaissance coffered ceilings, and interesting cellars.

Popular architecture spreads around thick valleys, high plateaux, and bleak lands. There are lots of towns where, in addition to admiring their artistic and cultural patrimony, one can play environmentally-sound, outdoor sports. These include Miranda del Ebro, Treviño, and Villasana de Mena. 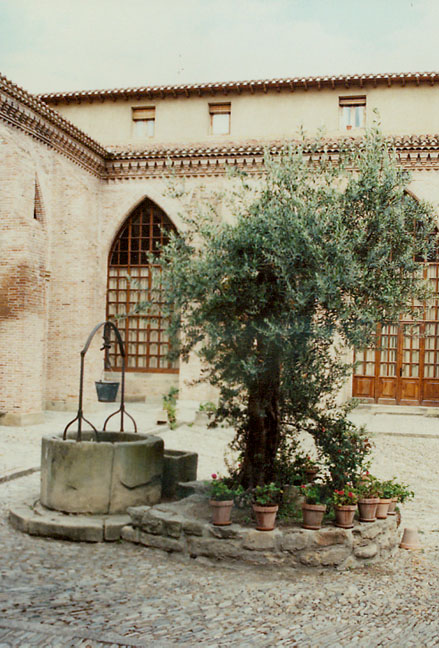 well in the courtyard

Something that all these places have in common is their charismatic cuisine. Burgos cuisine is enriched by a great variety of local products, like pulses, cured sausages, game meat, etc. Suckling lamb baked in a wood-fired oven, soused trout, and cod stew are some of its best main courses. For dessert, try the delicious "yemas" (a sweet made with egg yolks and sugar), fresh cheese with honey and walnuts, or caramel almonds. All this should be had with some of the famous wines that hold the label Designation of Origin - Ribera del Duero.