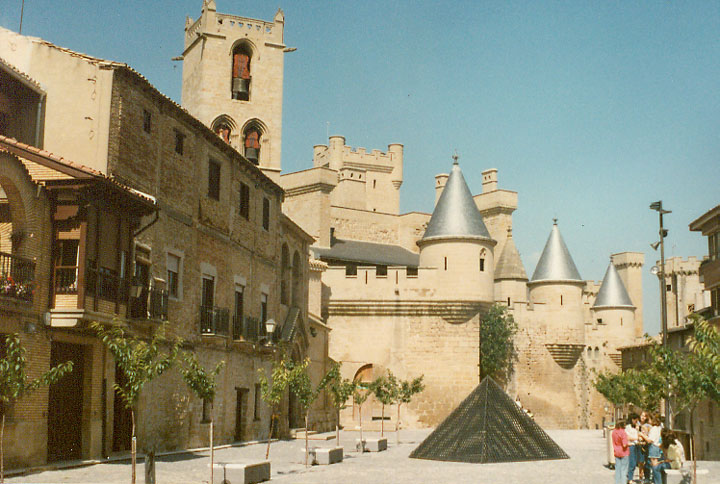 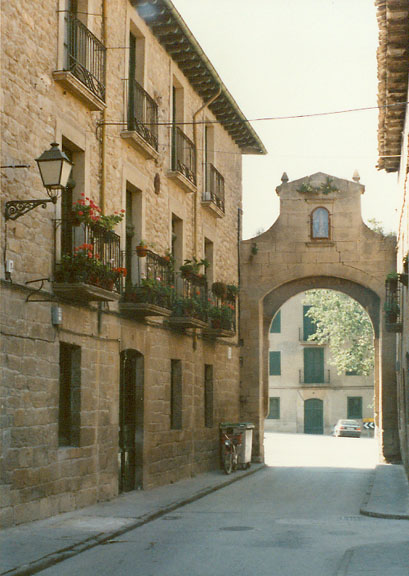 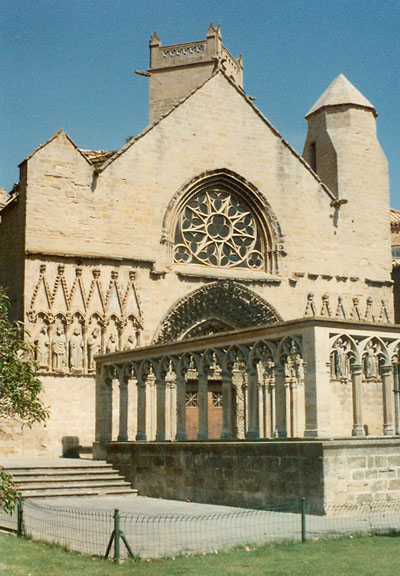 church on the Camino de Santiago 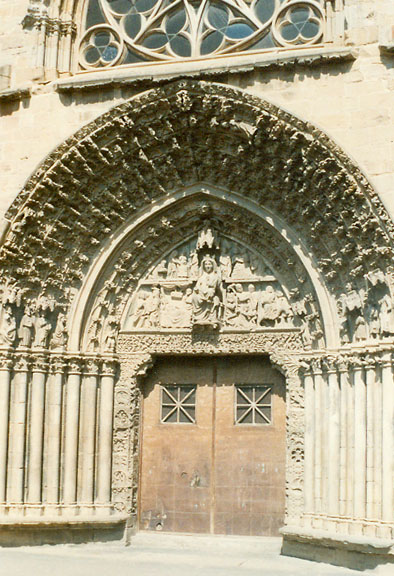 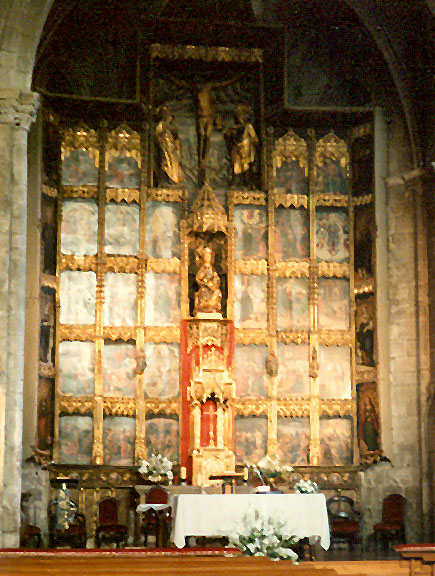 detail of mother and child 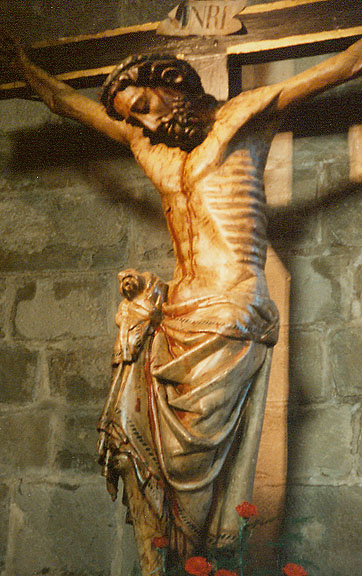 Christ on the cross 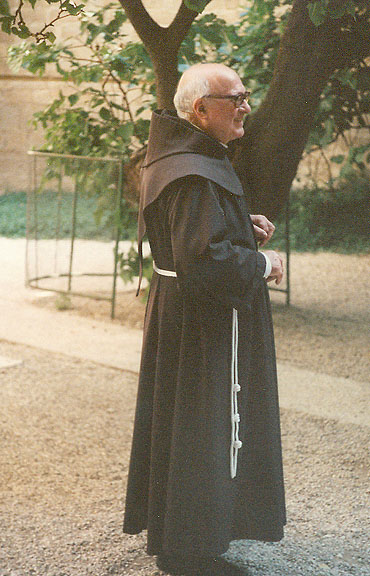 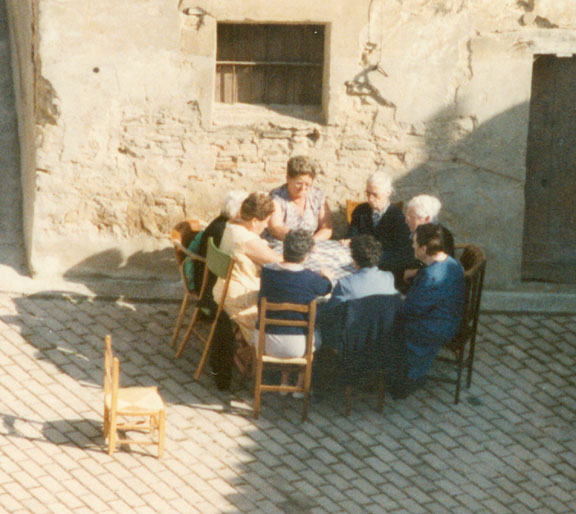 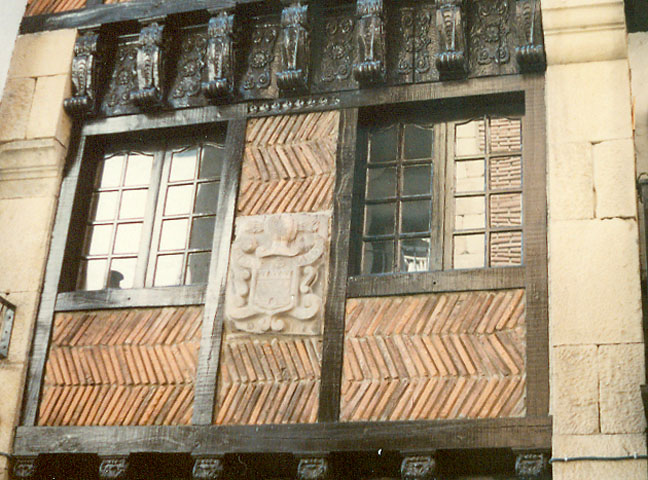 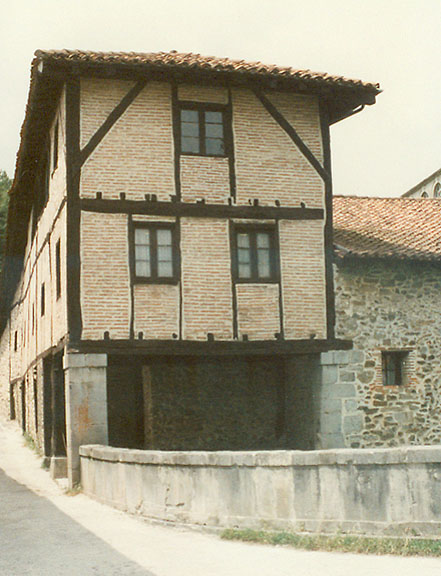 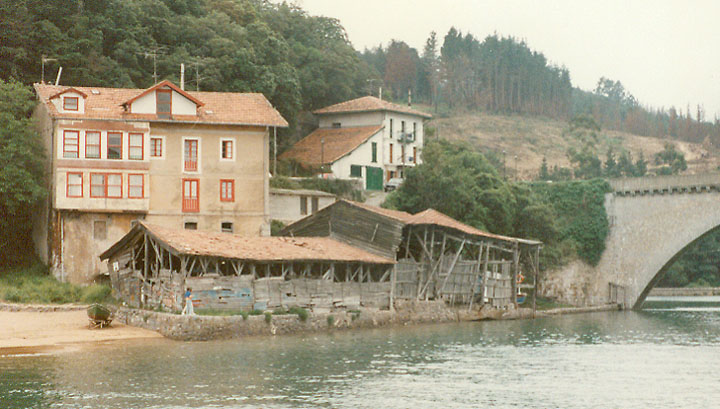 Vitoria-Gasteiz, founded towards the end of the 12th century, is today a city of exceptional urban design. The Basque capital has a medieval city centre, in which it is possible to find countless places of great traditional flavour, such as Plaza de la Virgen Blanca (White Virgin Square), and historic buildings like the cathedral of Santa María. From here, the city harmonically unfolds into the Romantic new suburbs, a network of wide avenues, gardens, and buildings that are a reminder of the grandeur and stateliness of Vitoria.

In addition, Vitoria enjoys an intense cultural life, as evidenced year after year by its most renowned event: the Jazz Festival. Its traditional, delicious recipes —based on fresh orchard products and always accompanied by a unique Basque wine— will not disappoint. 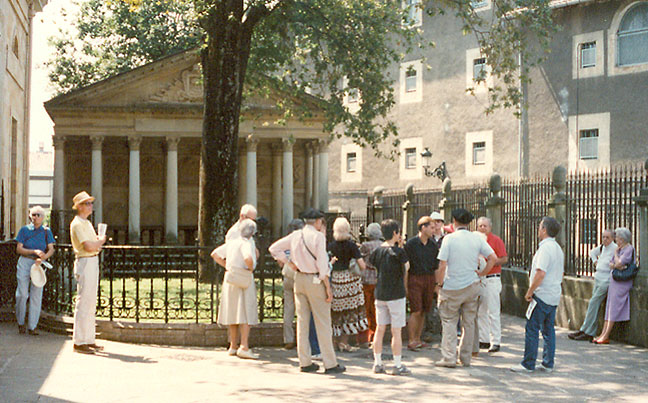 explaining the traditions of the Basque

Present day Vitoria was founded on a small hill in 1181 by Navarrese King Sancho VI, under the name of Nueva Victoria. Later on, in 1200, this fortified town went to the Castilian monarch Alfonso VIII. Soon, a flourishing vocation for crafts began to emerge in the village. In the 15th century, Juan II of Castile granted Vitoria the title of city. Through the 18th and 19th centuries, the expansion of the city into the new suburbs took place.

The Basque capital reveals a medieval quarter where it is possible to find the most charming little corners, gardens, and tree-lined boulevards, which make the capital of Alava a remarkable green space that does not disturb the careful urban layout, where medieval streets harmoniously intermingle with Renaissance palaces, and Neoclassical churches. The nerve centre of the city is Plaza de la Virgen Blanca (the White Virgen Square), presided over by the Battle of Vitoria monument. It is also the site of the church of San Miguel, which houses the image of the White Virgin, the city's patron saint. The present building dates between the 14th and 16th centuries, as evidenced by the mixture of Gothic and Renaissance elements. The church has a rectangular floor-plan, with three naves crowned with flamboyant Gothic ribs, and a high reredos, made by Gregorio Fernández. 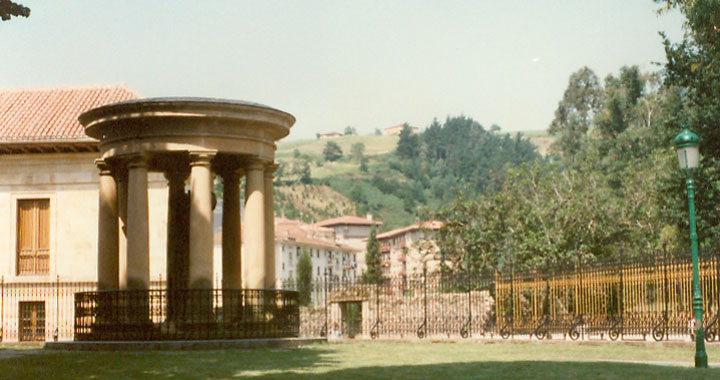 at Vitoria, the capital of the Basque region of Spain

The Gothic portico of San Miguel leads to the estate of Los Arquillos, an arcaded walk that connects the historic quarter with the nineteenth-century suburbs. We are in front of the church of Saint Vincent, and the Palace of Villa Suso (16th century), located in Plaza del Machete, place where traditionally city-council officials were sworn in.

The cathedral of Santa María, also known as the Old Cathedral, was erected at the highest part of the city. The construction of this magnificent Gothic temple began in the 13th century, and continued into the 14th. Later remodelling was done as the city grew. In 1496, the church became a collegiate church, until finally, in 1861, it achieved the rank of cathedral. The imposing building, declared Historic-Artistic Monument, has a pronounced Latin cross floor-plan, crowned with ogive vaults, as well as a magnificent ambulatory. From the exterior, we can see the monumental sculptures of the fourteenth-century main front, very worthy of mention; the sculpture in the central front, is devoted to the Virgin; the left front is dedicated to San Gil, while the right front depicts the Last Judgement, and Santiago the Apostle.

The surrounding area of the cathedral holds the most ancient streets of the city, as revealed by their guild names: "Cuchillería" (Cutlers), "Herrería" (Blacksmiths), "Correría" (Couriers), etc. Taking a stroll around this area, we will see the most significant Renaissance palaces in the capital. On Herrería street we will find the Escoriaza-Esquibel palace, with its gorgeous plateresque courtyard, as well as the Urbina Zárate palace; on Correría, we will admire the Portalón (Large Doorway), the House of Maturana-Verástegui, and the Tower of Anda; finally, on Cuchillería, we find the Palace of Bendaña (16th century), and Casa del Cordón, declared Historic-Artistic Monument. This old trading house from the Low Middle Ages, (built in the 15th century), has a Gothic façade with two pointed arches. Before leaving the old quarter, admire the Palace of Floral de Álava, home to the City Council, built in the 19th century, and the slender Tower of Doña Otxanda, the present site of the Natural Science Museum. This fortified structure, built in the 15th century on top of an older one, was commissioned by Andrés Martínez de Iruña, and Catalina de Álava. The New Suburbs

Around the historic quarter, the rationalist Vitoria, the Vitoria of the nineteenth-century expansion, unfolds. In the new suburbs that arose as a consequence of this expansion, we find the square Plaza de los Fueros , designed by the prestigious Basque artist Eduardo Chillida during the '80s. Further ahead we will find the cathedral of María Inmaculada, also known as New Cathedral, built in the early 20th century, following a Neogothic style. Next to the temple, we will see the Basque Parliament (19th century), the site of the present autonomous parliament. 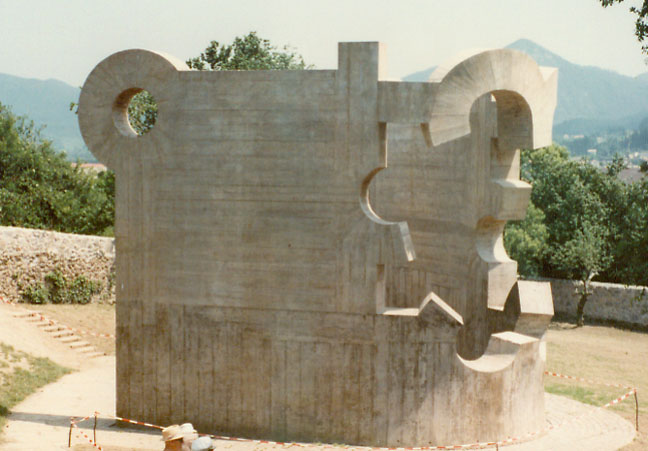 Both buildings flank the gates to the central Florida Park, one of the most emblematic in the city. It was built back in 1820, and it is remarkable for the wide variety of plant species that it houses. Other green spaces found in the capital include the Judizmendi Park, situated on top of an old Jewish cemetery, and the San Juan de Arriaga Park, the largest in the city. Among the many small palaces in this Romantic city, it is well worth it to stop before the Augusti Palace, home to the Museum of Fine Arts. This eclectic building, built in 1912, has been declared Historic-Artistic Monument. The Palace of Ajuria Enea, also from the beginning of the 20th century, is a clear example of Basque stately architecture, and it is presently the site of the Basque Government.

Vitoria enjoys an intense cultural life. Its extensive musical tradition shows at the Vitoria Jazz Festival. Each year in July, internationally acclaimed musicians bring the most varied styles to the Basque capital, brightening the streets of Vitoria for a week. A perfect excuse to come and discover the charm of the capital of Alava.

The Parador de Argómaniz (Argomaniz Inn), a majestic Renaissance palace, is located only 12 kilometres away from Vitoria-Gasteiz. There you can sample some of the most typical dishes of the region, such as the perretxikos (a kind of mushroom), the snails with sauce, and the goxua (a sponge cake with whipped cream and caramel). The Vitoria-style beans (habas a la vitoriana), the vegetable stew (menestra de verduras), the fried peppers (fritada de pimientos), and the white haricot bean stew (alubias pochas) are some of the specialities that make up this rich, traditional cuisine. The region of Rioja Alavesa produces excellent wines, which are included in the Designation of Origin - Rioja.

The Pilgrim's Road to Santiago de Compostela has left a particular artistic mark in the province. The Zalduondo country house, home to the Ethnographic Museum, is the first stop of the pilgrimage in Alavan territory. In this town we can admire the Lazarraga Renaissance palace, and the parish church. Erected in the vicinity of Eguilaz, the Dolmen of Aizkomendi is one of the megalithic compounds of the Basque Country. The journey continues to Salvatierra, a medieval village with remains of the old wall, and large Renaissance houses; worthy of mention are the churches of San Juan and Santa María. Upon reaching Alegría and Vitoria-Gasteiz, the path continues to Domingo de la Calzada, in the Rioja territory.

The natural heritage of Álava is tremendously diverse. This fact is proven by the amount of protected spaces that it has, among which it is worth mentioning the Valderejo Nature Reserves, to the west of the province, the Izki Nature Reserve, which preserves one of the most extensive melojo-oak forests, and the Área de Gorbeia Nature Reserve, located at the boundary between the and Biscay, considered to be one of the biggest natural tourist attractions in the Basque Country. 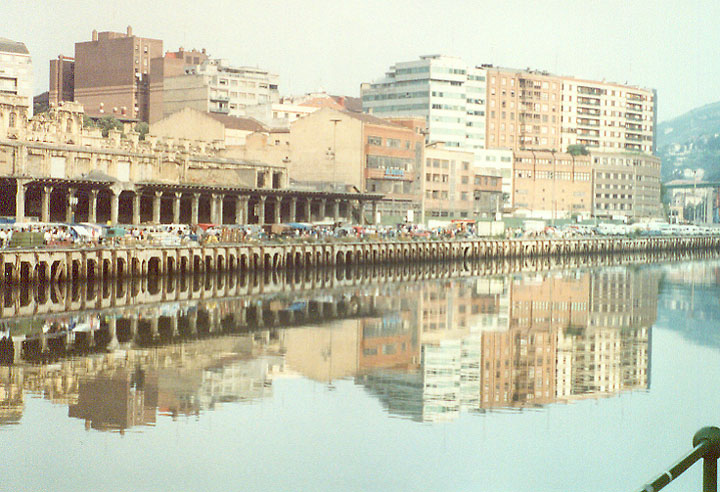 on the Nervión River

Bilbao, city and seaport in northern Spain, on the Nervión River, near the Bay of Biscay, capital of Vizcaya Province, in the Basque Country autonomous region. Bilbao consists of an old section, on the right bank of the Nervión, and a modern section, dating from the late 19th century, on the left bank. Several bridges connect the old and new sections. Several railroads and highways and an international airport serve Bilbao. A subway system opened in 1995. One of the major industrial centers of Spain, the city is within a large iron-ore mining region. The chief industries are shipbuilding and the manufacture of cement, chemicals, foodstuffs, iron and steel, machinery, paper, and textiles. Bilbao is an important seaport, and iron ore, cereal grains, and wine are major exports. The chief imports are coal and timber. The Semana Grande is a major bullfighting event held in Bilbao each August. 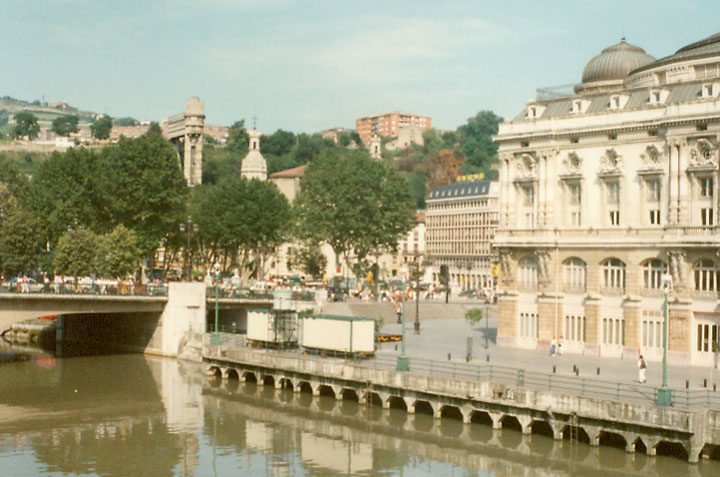 The city has several churches, among them the Gothic Church of Santiago, which dates from the 14th century. It also has a number of museums, including a collection of archaeological finds relating to the history of the Basques. In October 1997 the Guggenheim Museum Bilbao, with its collection of modern art, opened on Bilbao's waterfront. Among the city's educational institutions is the University of Deusto, a Jesuit university founded in 1886. The author and philosopher Miguel de Unamuno y Jugo was born in Bilbao. 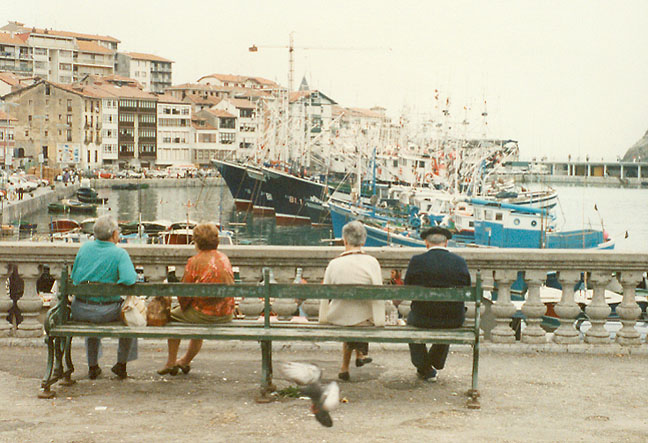 Founded in 1300, Bilbao swiftly became one of the leading seaports of Spain. The fortunes of the city declined during the 17th and 18th centuries. In the 19th century the demand for iron ore and steel throughout Europe led to renewed industrial growth in Bilbao. The city withstood two great sieges by the Carlists from 1835 to 1836 and in 1874. During the Spanish Civil War (1936-1939), Bilbao was the capital of a previous, short-lived autonomous state of the Basques that was under Loyalist control. The old section of Bilbao was severely damaged by a flood in 1983, but has since been restored. Population (1998 estimate) 358,467. 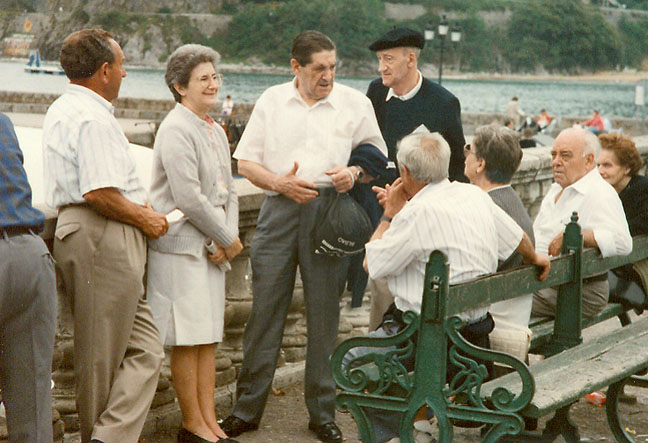 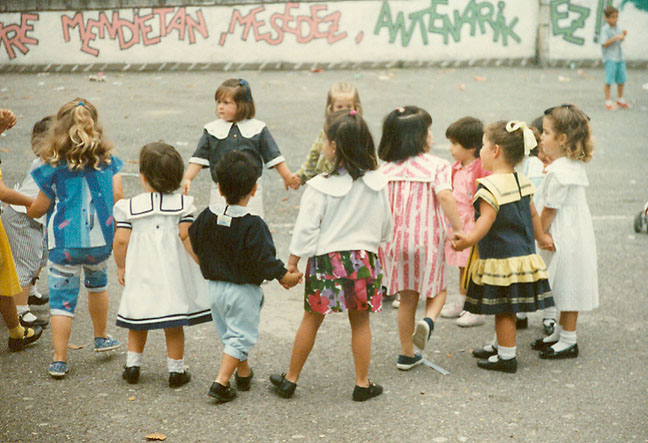