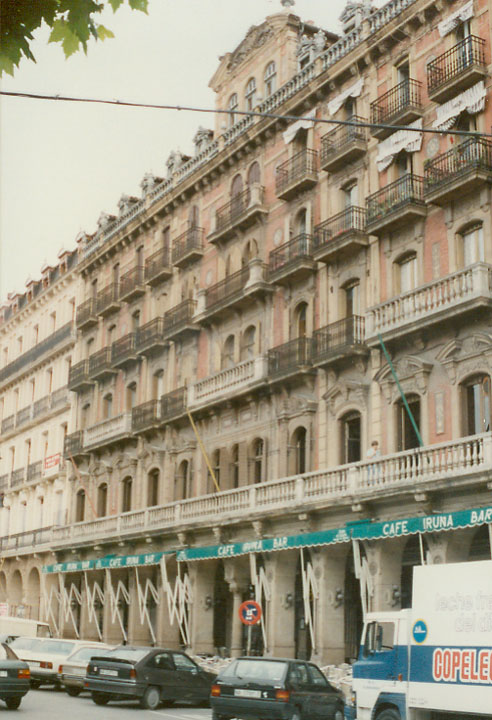 During the Spanish Civil War (1936-1939), he was in Spain as a newspaper correspondent. 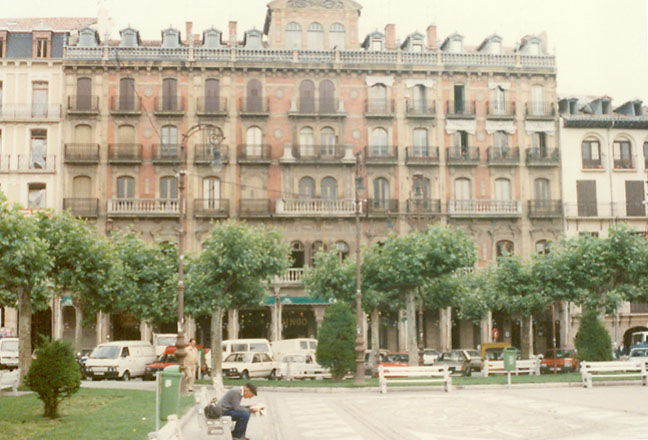 spent many hours at the street Cafe

On the fertile plain of the river Arga sits Pamplona, a city full of history and deep-rooted traditions. The streets and squares of its historic quarter still preserve a significant collection of monumental buildings dominated by its churches and medieval walls.

Pamplona is a city where tradition and modernity live harmoniously side by side. Founded by the Roman general Pompey in 75 BC, the city's importance grew in the 10th century with the kingdom of Pamplona. During the reign of Sancho III el Mayor (11th century), the current route of the Pilgrim's Road to Santiago de Compostela was traced through the lands of Navarre, a fact which would mark both the appearance of the city and the very history of the place. A visit to the capital of the Navarre province begins with the Pamplona of the hamlets, a series of districts of medieval origin which were the source of the current urban centre. In the central plaza Consistorial stands the stately baroque façade of the City Hall. The building, erected in 1752, commemorates the union of the hamlets of San Cernín, San Nicolás and Navarrería. 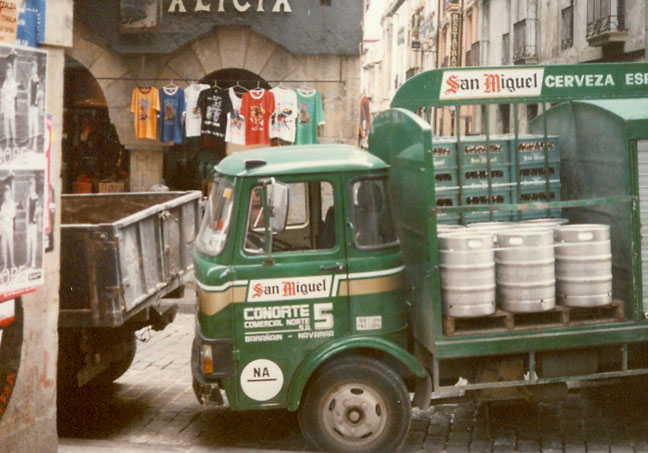 beer truck on the street where the bulls run

Link to BBC running of the Bulls

Next door to the City Hall, you can admire the Gothic church of San Saturnino or San Cernín, built in the 13th century. Its two towers, previously crowned with crenellations, give us a glimpse of its former defensive function. Meanwhile, over the old cloister is its baroque chapel of the Virgen del Camino, joint patron of the city.

The neighbouring Cámara de Comptos (13th century), the oldest building in the city, was the site of the former Court of Auditors of Navarre between the 14th and 19th centuries. 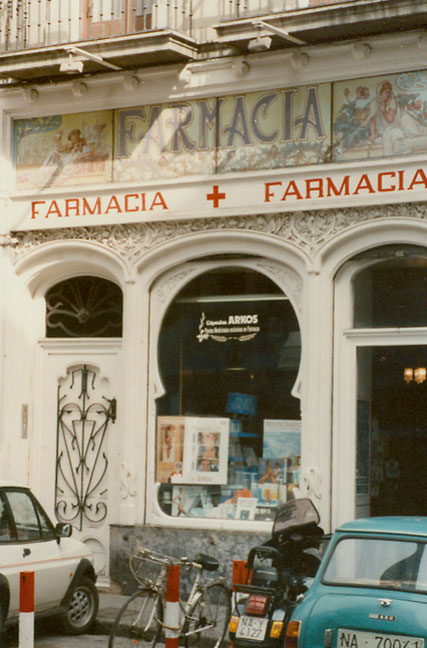 Leaving along calle Mayor you reach the church of San Lorenzo (19th century), which houses the baroque chapel of the city's patron saint, San Fermín, and, lastly, the baroque basilica of the Agustinas Recoletas, which preserves a beautiful churrigueresque reredos inside. 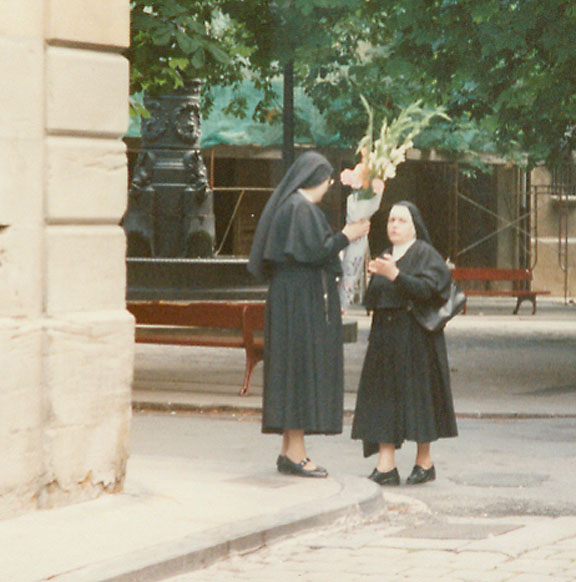 On the hill of Santo Domingo you can see other buildings of the former Iruña. The plateresque façade of the interesting Museum of Navarre, which houses a major collection of archaeological pieces and works of art, and the Gothic church of Santo Domingo, from the 16th century and which boasts a fine baroque façade from the 17th century. 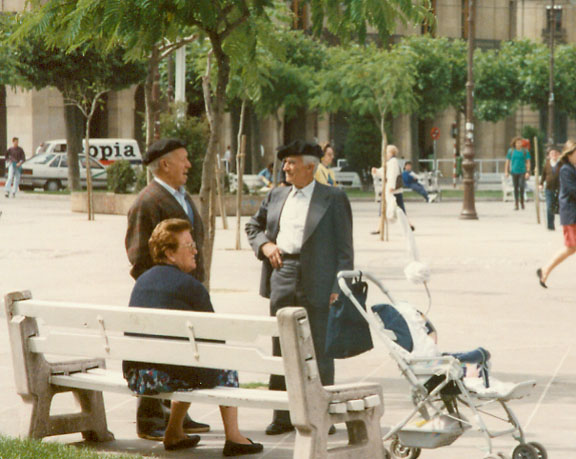 The Castle square, with trees and surrounded by beautiful 18th-century buildings, has become the very heart of the city. The Palace of Navarre, site of Navarre's government, was built in the mid-19th century and preserves its Neoclassic façade. Outstanding inside are the Throne Room, in the baroque style, and the reredos of the Chapel, as well as a portrait of Felipe VII painted by Goya. 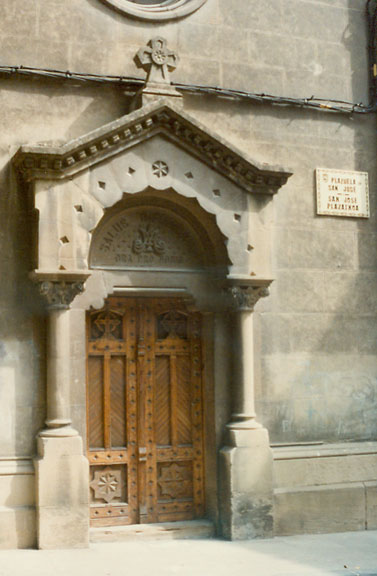 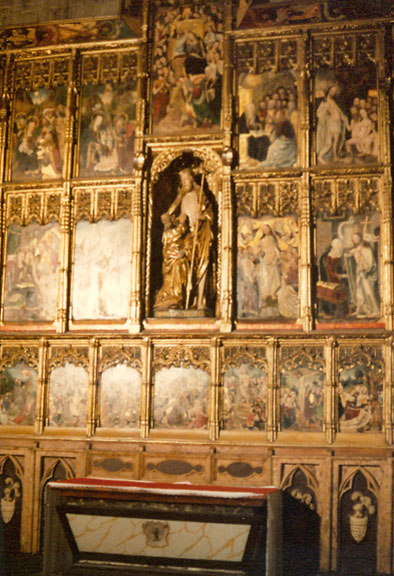 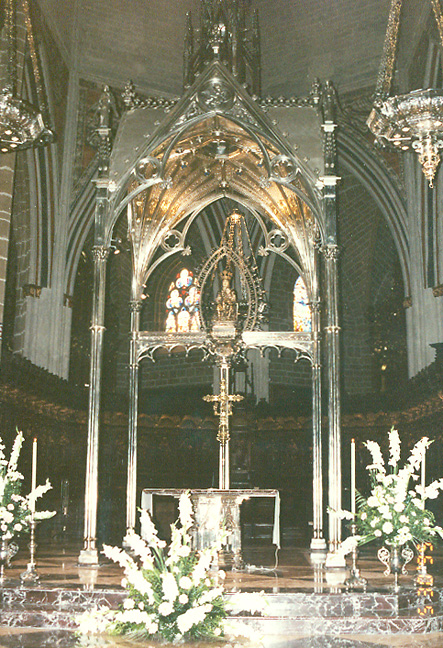 Equally outstanding is the Gothic cloister (13th-15th centuries), with its Puerta del Amparo, the Barbazana chapel and the Puerta Preciosa. The Diocesan Museum contains an interesting collection of works of sacred art, outstanding among which is a group of medieval sculptures of the Virgin and several pieces of French medieval precious metalwork. 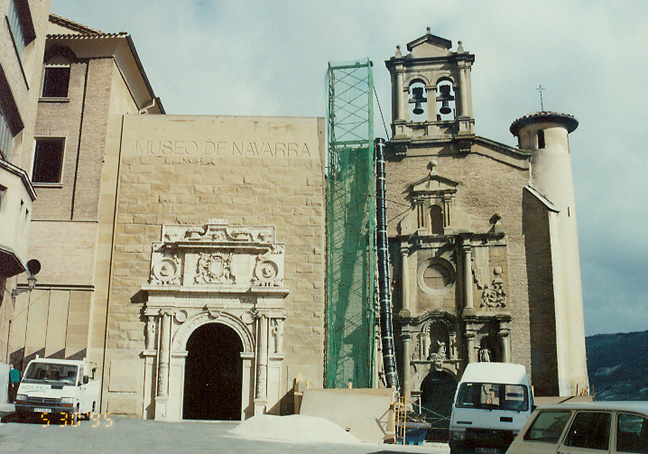 Going down one of the adjacent streets, you arrive at the neighbourhood of la Navarrería, in the centre of which stands the Cathedral of Santa María la Real. The cathedral complex was begun in the mid-13th century, on the site of the former Romanesque cathedral, although work on it was not completed until the 16th century. This magnificent building has three naves in the Gothic style, as well as several Neoclassic additions. The central nave houses the mausoleum of King Carlos III the Noble and his wife (15th century), worked from alabaster and considered to be one of the most important series of sculptures in Navarre. The high altar is dominated by the image of the Virgen del Sagrario, before which the monarchs of Navarre swore oaths during their coronation ceremonies. 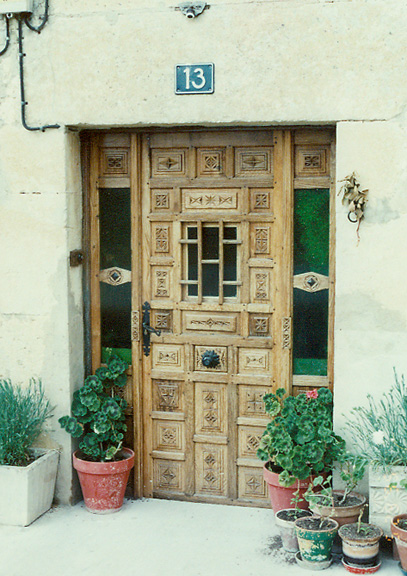 Next to the cathedral premises are some noblemen's houses, such as Itúrbide, from the 17th century and which preserves the family coat of arms, and the palace of Goyeneche, built a century later. The city's newer districts have extensive green areas: the Ciudadela park, la Taconera park and the gardens of la Media Luna are fine examples of a city which has enjoyed model urban growth. Gastronomy, festivals and surrounding area Pamplona's old town is an idea place to sample the delights of the varied gastronomy of Navarre. In any of its restaurants you can taste the traditional produce of Navarre's fertile fields –asparagus, "piquillo" red peppers, beans-. Roast lamb or lamb cooked with tomatoes and peppers is the most emblematic dish, always accompanied by a fine wine with the Designation of Origin Navarra guarantee and a "pacharán" (traditional aniseed liquor) for dessert. In order to understand Pamplona and its inhabitants at festival time, the visit to the city must be made during the Sanfermines (6-14 July), declared to be of International Tourist Interest. One of the greatest attractions of these festivals in honour of the city's patron saint is the running of the bulls (a tradition which involves running in front of bulls), which mainly takes place on the hill of Santo Domingo, continuing afterwards along calle Mercaderes until the crossroads with Estafeta, which leads to the Bullring.

However, before taking part, you are recommended to be in good shape and to take certain precautions, such as only entering at the authorized points and avoiding calling the animals. It is also important to book accommodation well in advance. 45 km from the capital of Navarre, in the historic medieval town of Olite, is the Parador Príncipe de Viana. This establishment stands next to a 15th-century palace-castle, declared to be a National Monument, with outstanding towers and crenellations. 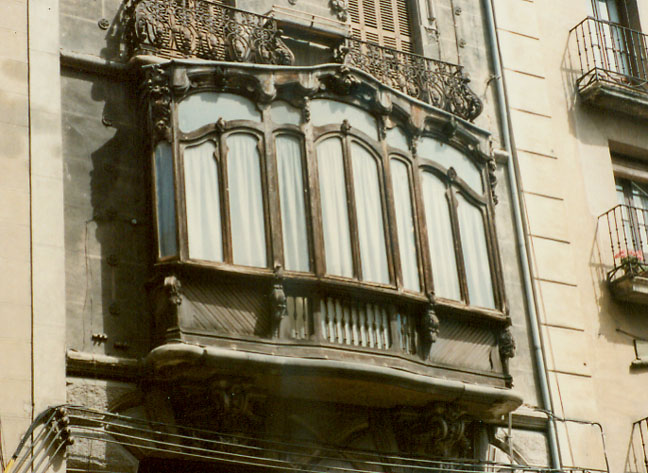 One of the most important valleys is Baztán, which stretches out surrounded by mountains and contains villages such as Berroeta, Aniz, Ziga, etc, all of them with a great many medieval towers and palaces. Fine examples of these constructions can be found in the capital of the valley, Elizondo, from where you can go on to visit Urdax and Zugarramurdi, these last villages famous for their caves and for being the old site of sorcerers' covens.

In the Eastern Pyrenees the main feature is the Pilgrim's Road to Santiago de Compostela. Coming down from France, it enters the lands of Navarre until arriving at Roncesvalles, a town established as a sanctuary and hospital in 1132 and a first staging post for pilgrims. Following the chain of mountains eastwards is the Selva de Irati, a unique natural area which hosts one of the largest beechwoods in the south of Europe. Another point of interest in the eastern Pyrenees is Valle de Salazar and Ochagavía, the most populated town in the region. 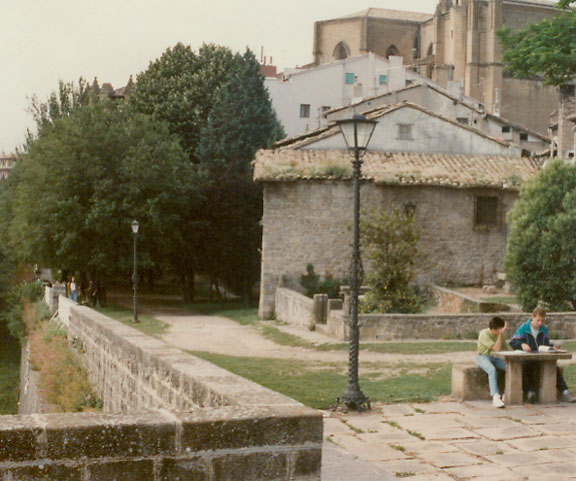 along the city wall

Also near Pamplona you can enjoy sites of great natural beauty. To the west is the Urbasa and Andía Nature Reserve. To the north, the villages and valleys of the Pyrenees in Navarre provide some of the most beautiful landscapes in the entire province. In the Atlantic Pyrenees, at the western-most end, are major natural spaces, such as the Bertiz Nature Reserve. 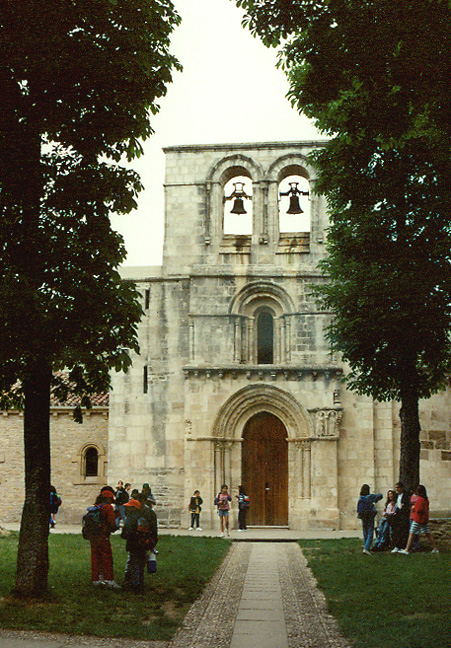 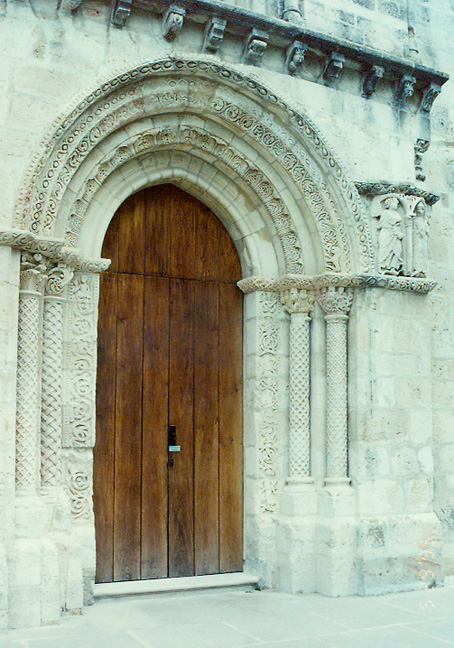 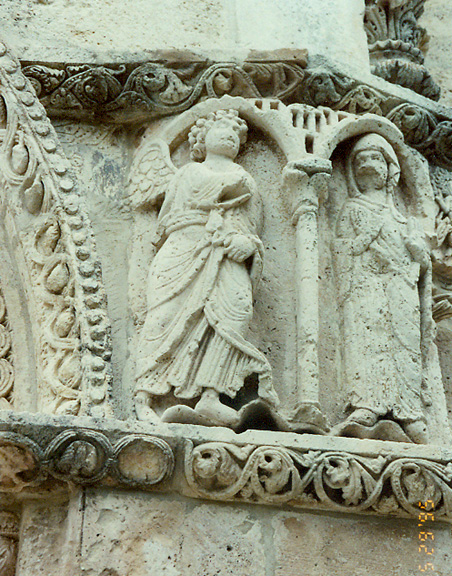 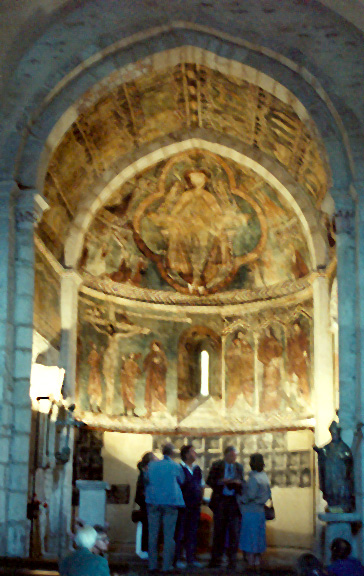 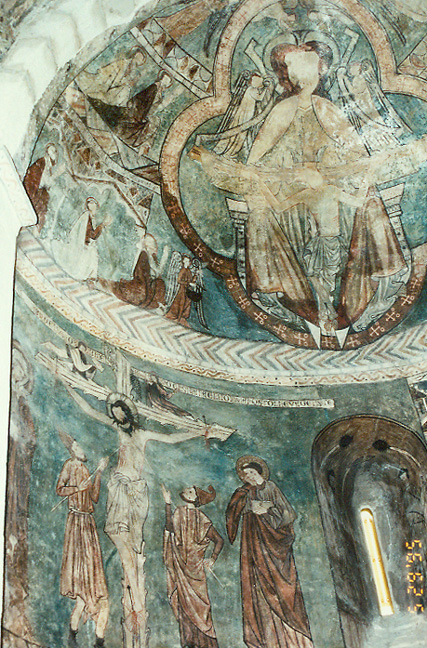 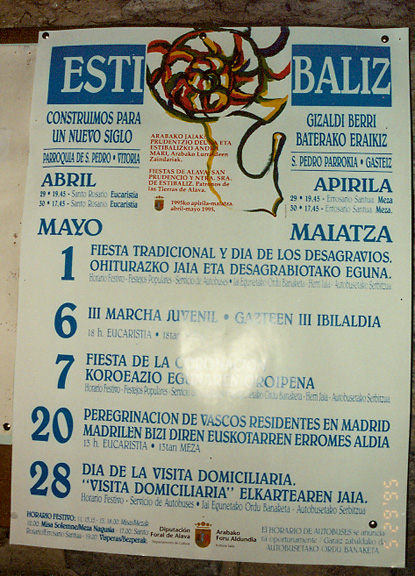 services listed in Spanish and Basque 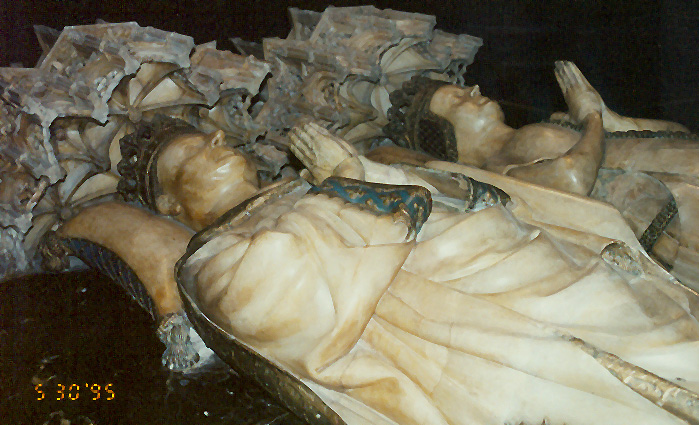