Toledo (Spain), city, central Spain, capital of Castile-La Mancha region and of Toledo Province, on the Tajo (Tagus) River, near Madrid. The city is built on a promontory, about 732 m (about 2400 ft) above sea level, bordered on three sides by a gorge in the Tajo, with the land side protected by an inner and outer wall. The most famous industry is the manufacture of swords, both by private companies and by a government factory. Other manufactures include beer, confectionery, church ornaments, textiles, bricks, and fans. 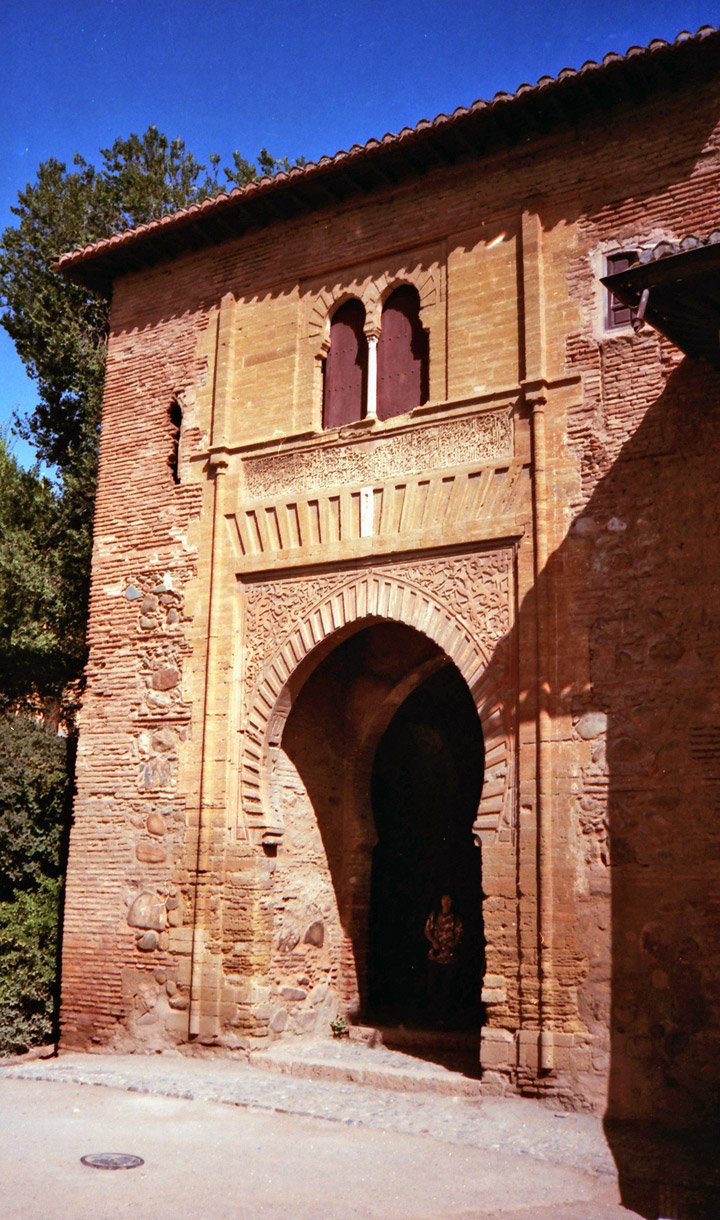 Toledo has many towers, old gates, narrow, winding streets, massive houses, and predominantly Moorish architecture, which give it a medieval atmosphere. 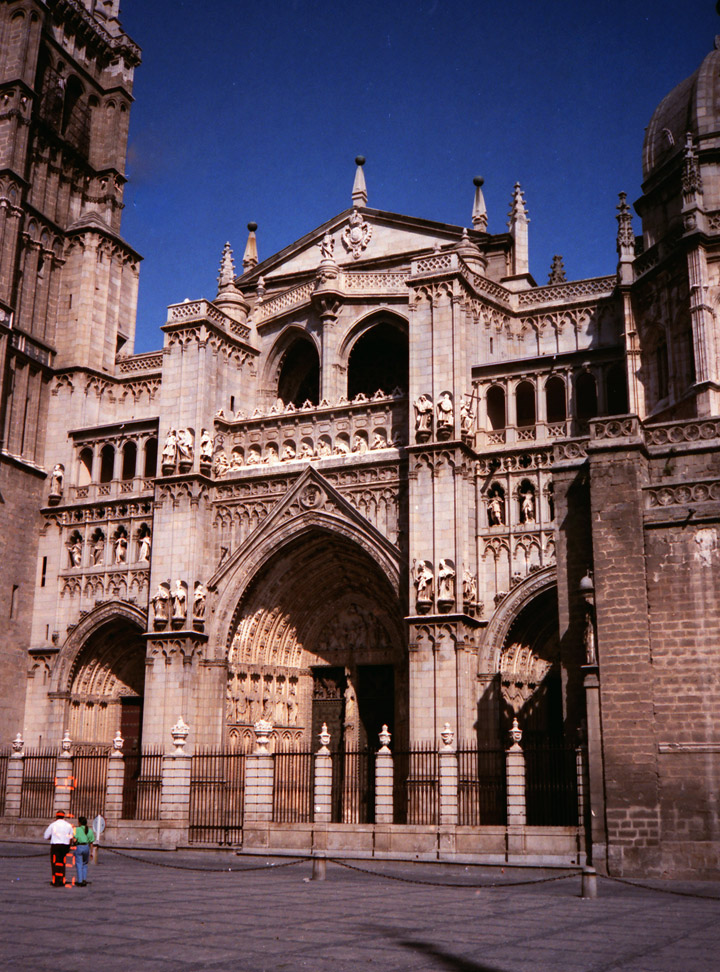 In the center of the city rises the principal edifice, a Gothic cathedral (1227-1493) with 40 chapels. Other noteworthy architectural features are the Gothic Church of San Juan de los Reyes and its adjoining convent, a gift (1476) of Ferdinand V, king of Castile, and his wife Isabella I; El Tránsito, a synagogue (1366) that was converted to a church after the expulsion of the Jews in 1492; and the Church of Santo Tomé, originally a mosque and rebuilt as a Gothic church in the 14th century. 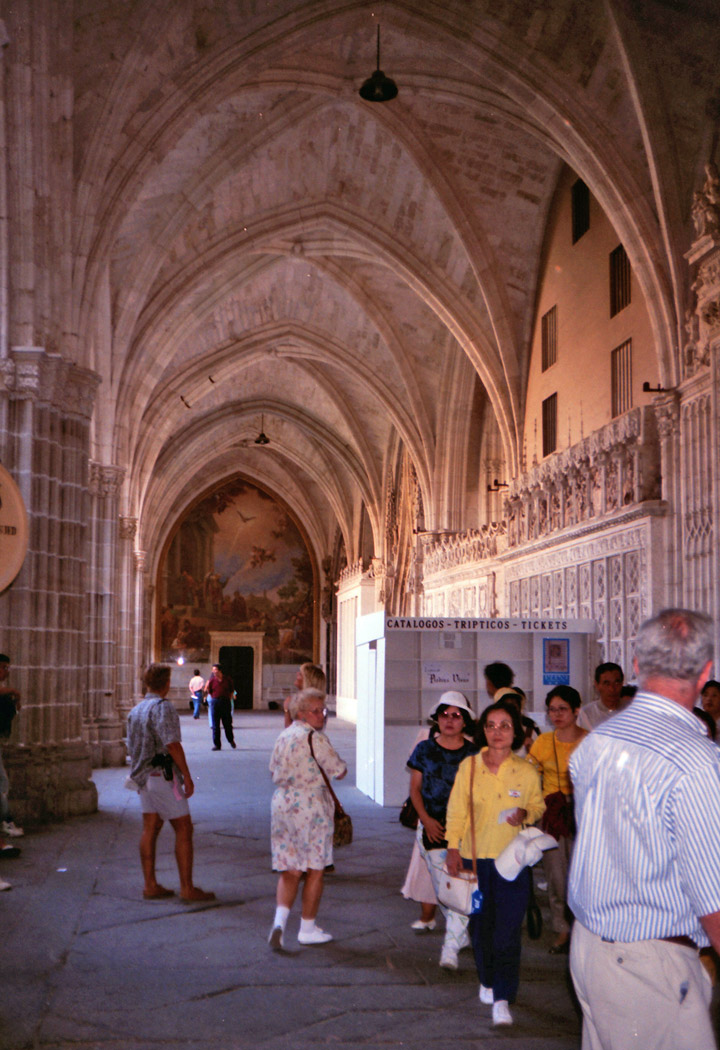 The churches of Toledo contain some of the greatest works of art in Spain, notably those by the painter El Greco. 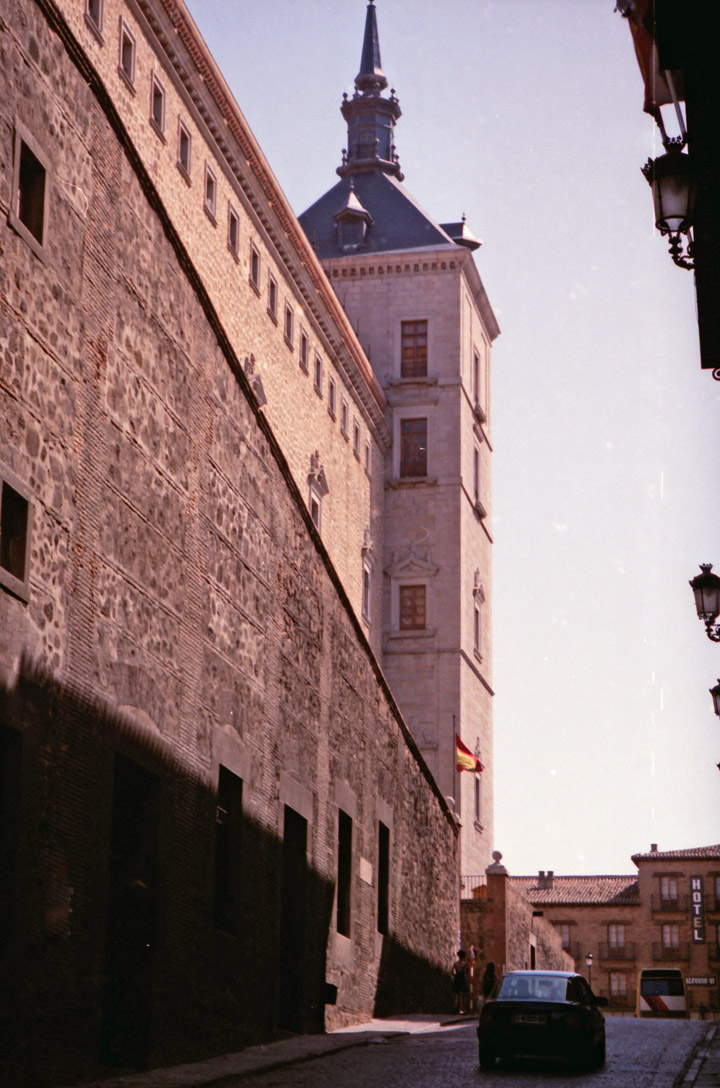 On the highest ground stands the Alcázar, a vast, square edifice with four towers, now a military academy, around which the houses of Toledo are grouped in a semicircle. The Plaza de Zocodover, built in the 7th century and later rebuilt by Moorish invaders, is a fashionable promenade and was long the site on which victims of the Inquisition were burned and bullfights took place. 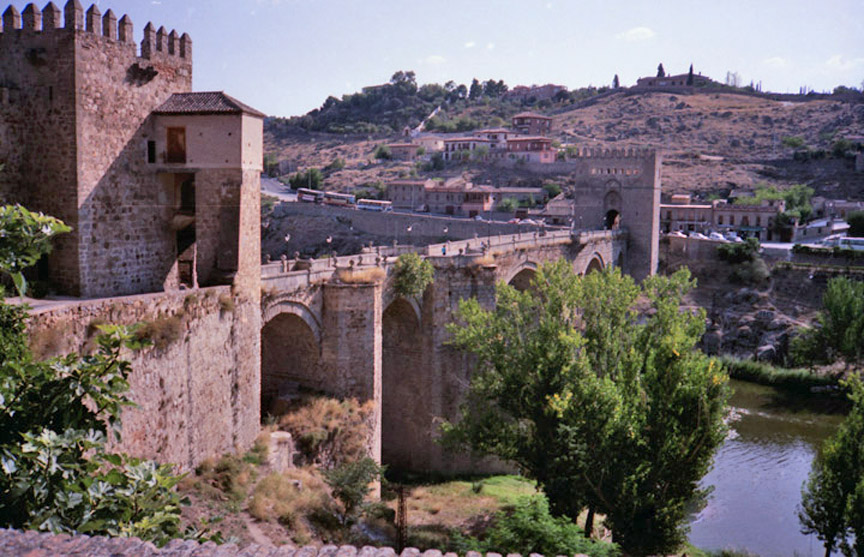 Of pre-Roman origin, the city fell to the Romans about 193BC and was named Toletum. From about AD534 to 712, Toledo was the capital of the Visigothic kingdom in Spain and became a great ecclesiastical center. After its conquest (712) by the Arabs, the city became an important Moorish center and in the 11th century the capital of a short-lived Moorish kingdom (1035-85). In 1085, after a memorable siege, the city was captured by the forces of Castile and annexed to the Castilian realms, of which it was made the capital (1087-1560). From July to September 1936, during the Spanish Civil War, rebel forces in the Alcázar were besieged for 70 days by Loyalist, or Republican, forces. Population (1991) 63,561. 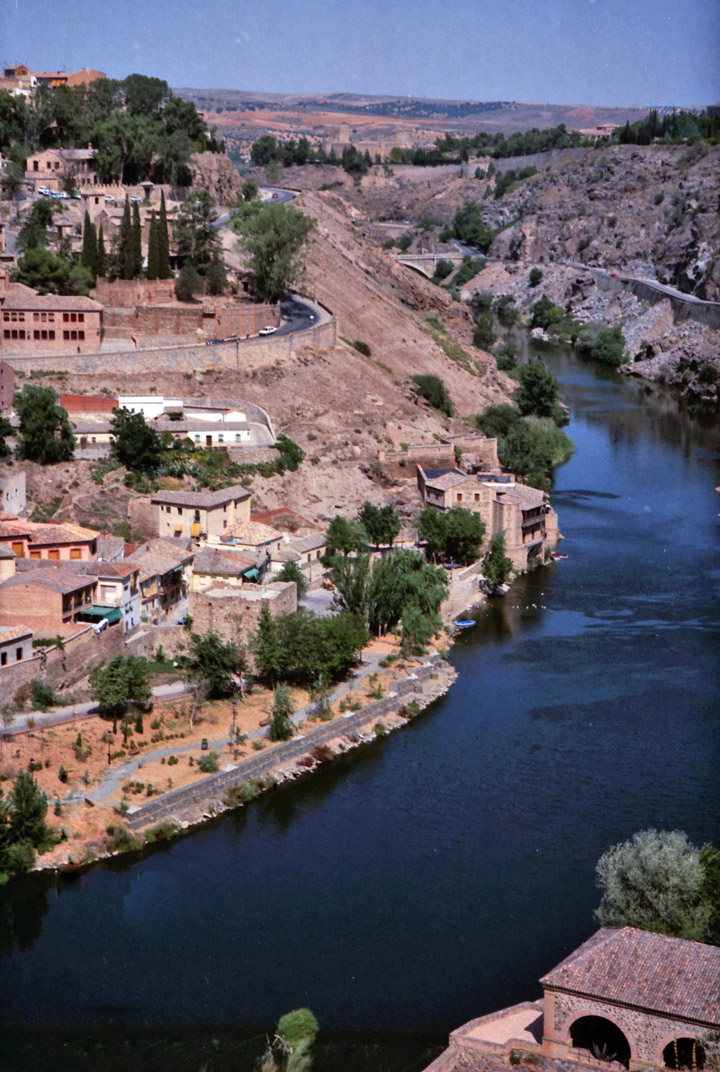 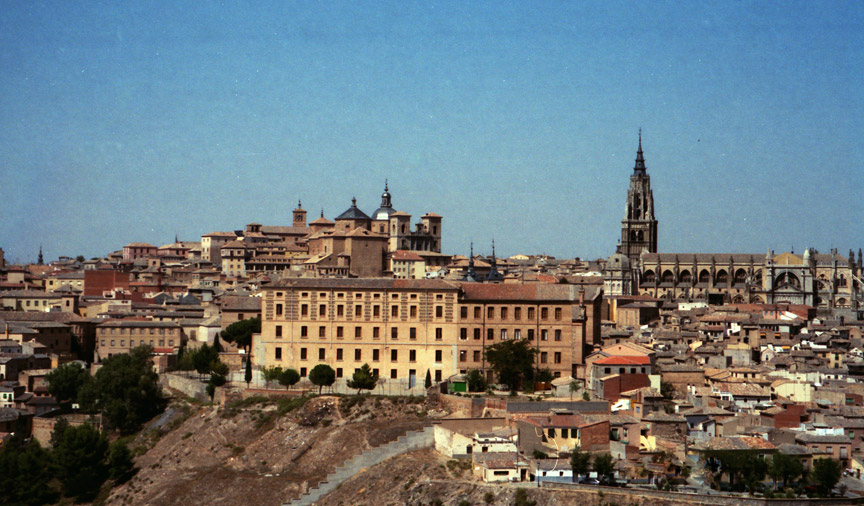 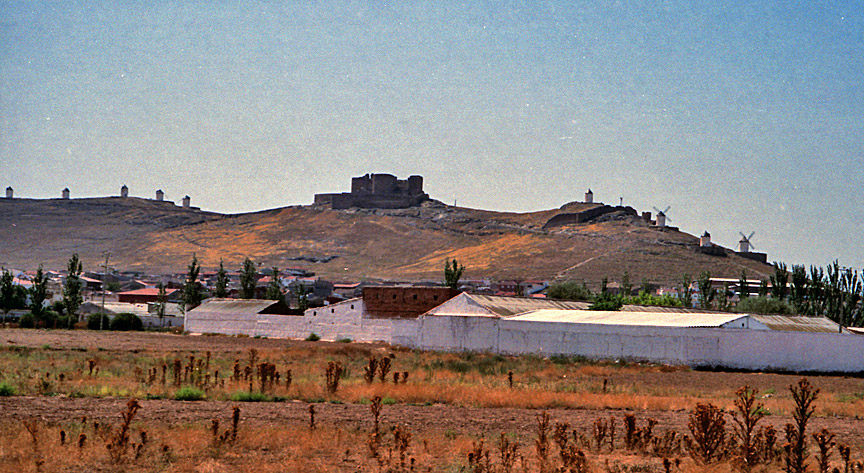 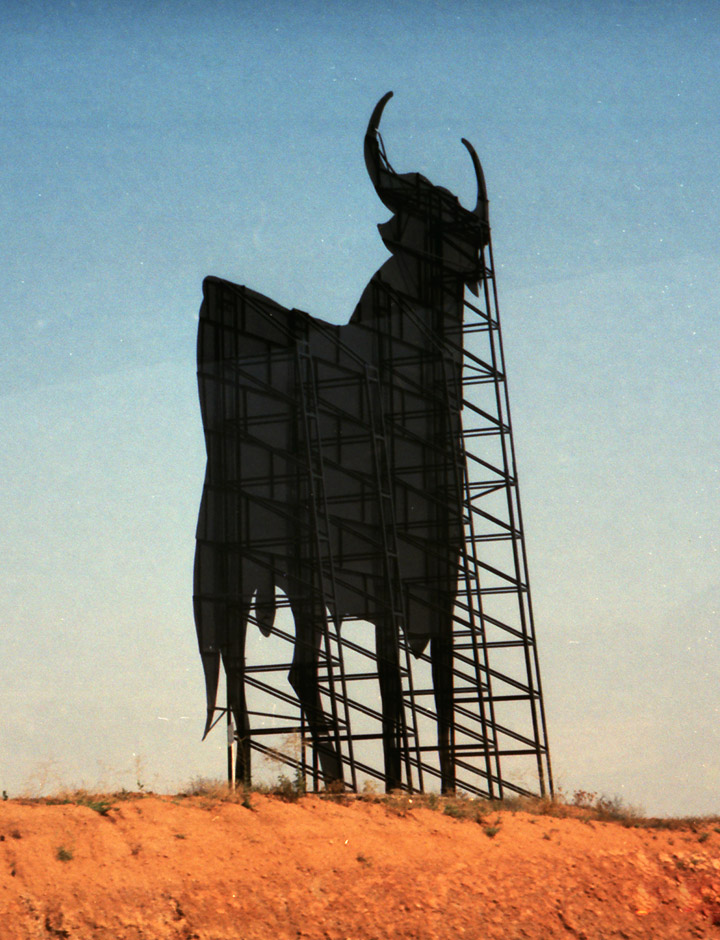 Granada (city, Spain), city in southern Spain, capital of Granada Province, in Andalucía, at the foot of the Sierra Nevada Mountains, at the confluence of the Genil and Darro rivers. Industries in the city, which is the trading center for the surrounding agricultural area, include sugar refining, brewing and distilling, and the manufacture of munitions, chemicals, leather products, and textiles. Tourism is important to the local economy.

The most important vestige of Granada's splendid Moorish civilization is the remaining section of the Alhambra, the fortress-palace of the Moorish rulers. 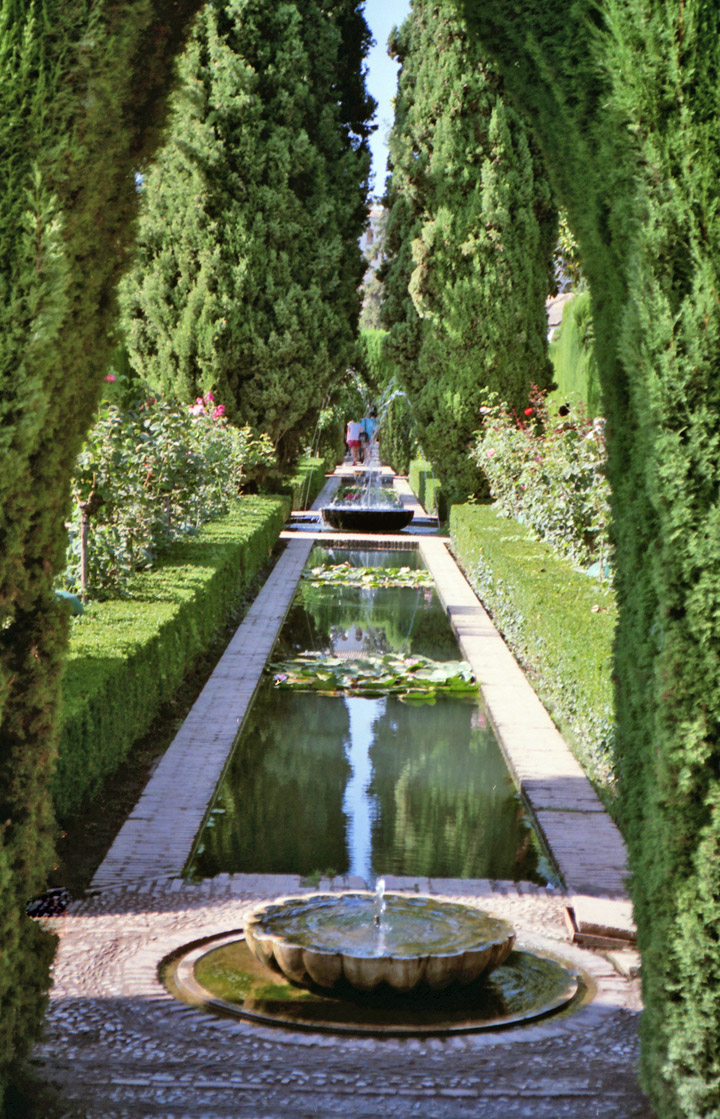 garden of the Alhambra

Other important buildings include the university, chartered in 1531 by Charles V, emperor of the Holy Roman Empire, and the cathedral, built between 1523 and 1703. Adjoining the cathedral is the Royal Chapel, containing the tombs of Ferdinand V and Isabella I, joint sovereigns of Castile.

Granada was founded in the 8th century by the Moors near the site of an ancient Roman settlement. Between 1036 and 1234, it was a part of Moorish Spain. At the end of that period, when the Moors were deprived of most of their Spanish possessions, the city replaced Córdoba as the capital of the remaining Moorish territory, called the kingdom of Granada. The city of Granada then entered its most flourishing era, becoming a rich trading center and attaining a reputation as a center for art, literature, and science. The city continued to prosper for about a century after the Spanish conquest of the kingdom of Granada in 1492. During the Spanish Civil War (1936-1939) the Nationalists captured the city, but the Loyalists held the rest of Granada Province until the end of the conflict. Population (1991) 254,034.