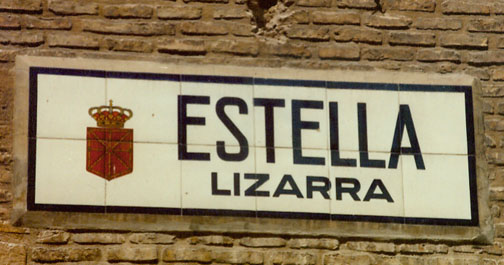 As it passes through Navarre, the Pilgrim's Road to Santiago de Compostela, with World Heritage status, leads us to Estella. This town, crossed by the river Ega, has a medieval old town where the Roman and Gothic constructions are a testimony to its historic splendour. 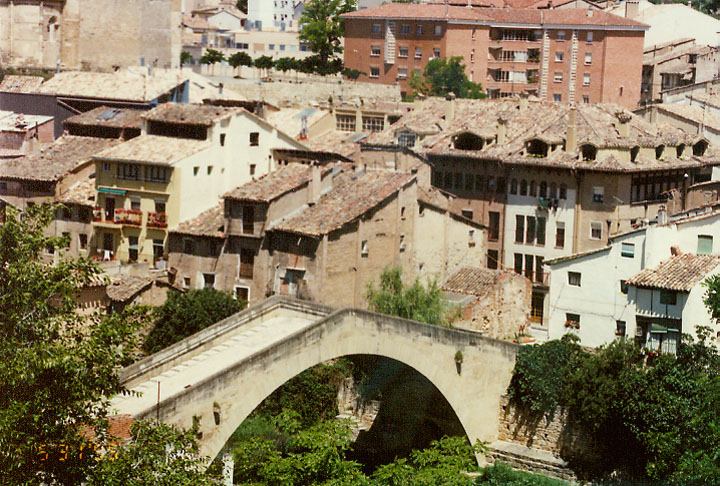 view of the city

The capital of the area of Tierra Estella has its origins in Roman and "Vascon" settlements, but it was the king of Navarre, Sancho Ramírez, who founded the current city to attend to the great many pilgrims. Its position on the Pilgrim's Road to Santiago de Compostela and the fact that it became the site of the royal court, contributed to its economic prosperity throughout the entire Middle Ages. 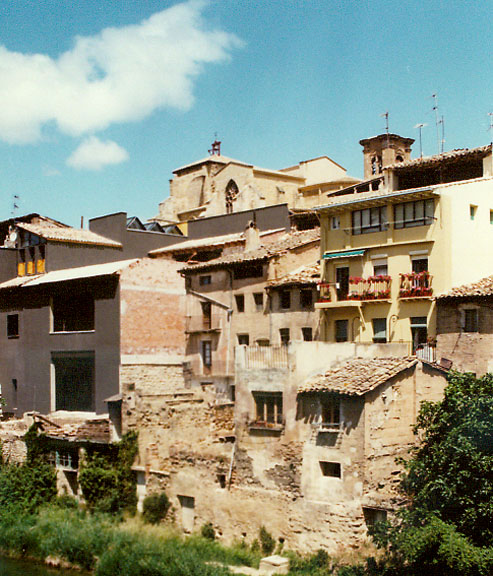 Typically medieval streets lead us to Romanesque architectural gems. At the top of a great staircase is the Cistercian church of San Pedro de la Rúa. The Romanesque features of its structure and decoration can be seen in its façade and cloister. Semicircular arches, vegetable and representational decoration lead us to the decorated capital of its cloister, a beautiful spot for strolling and taking in the excellent execution of the biblical scenes. 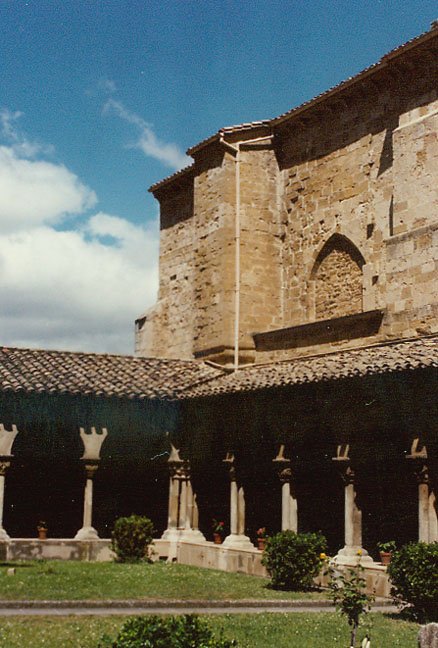 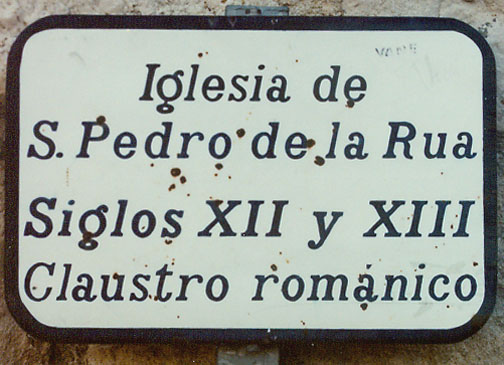 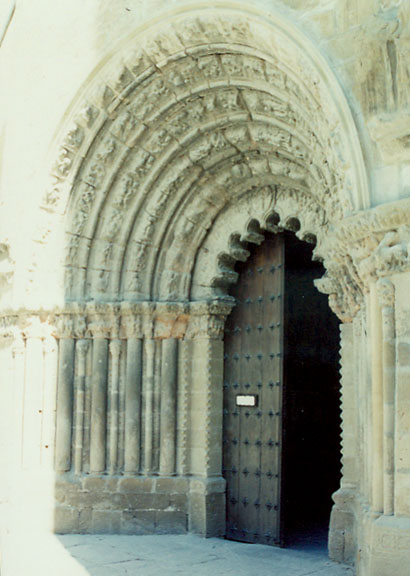 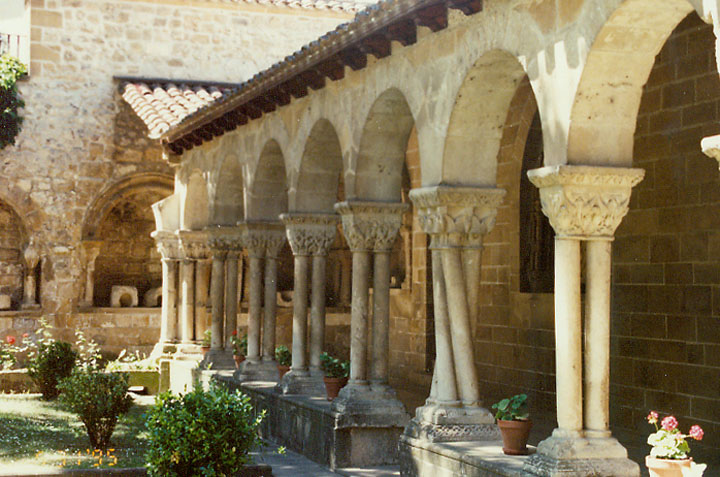 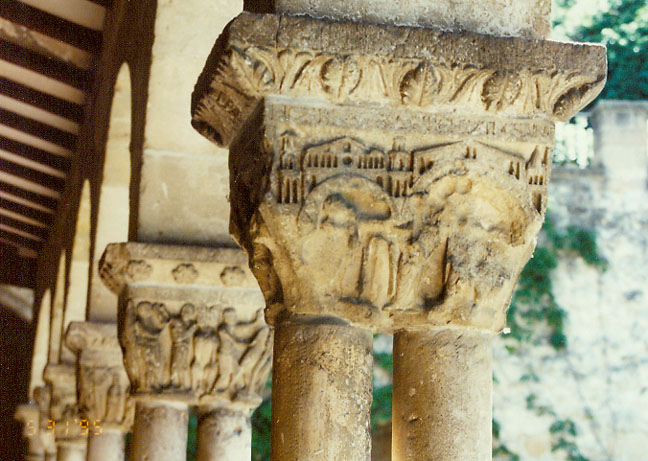 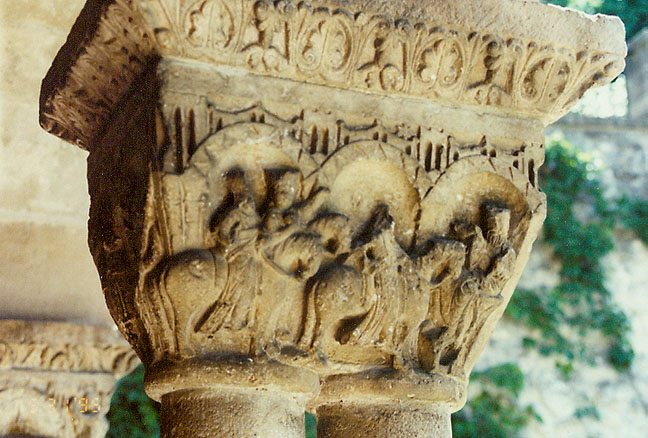 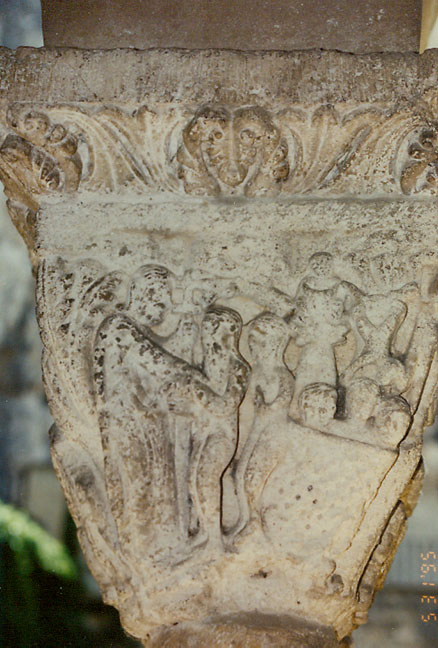 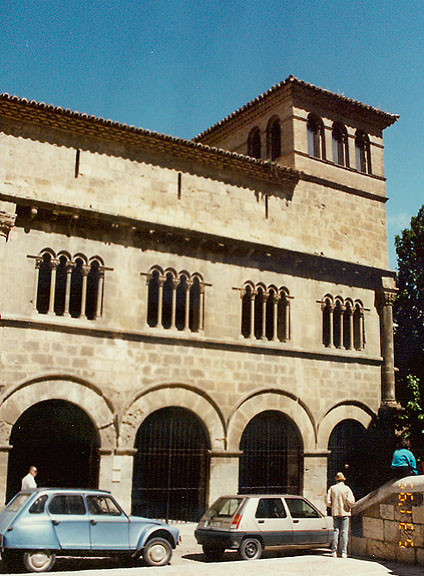 Palace of the Kings of Navarre 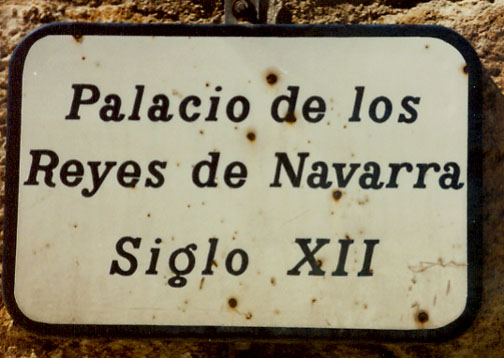 It is worth stopping at the Palace of the Kings of Navarre, also named after the Dukes of Granada de Ega. It is a delightful example of Romanesque civil architecture, singular because of its rarity. As well as its two floors, outstanding is the decorated capital representing an episode from the Legend of Roldán, a rare motif in Romanesque art. Its other capitals have typically Cistercian vegetable decoration. It currently houses the Gustavo de Maeztu Museum. 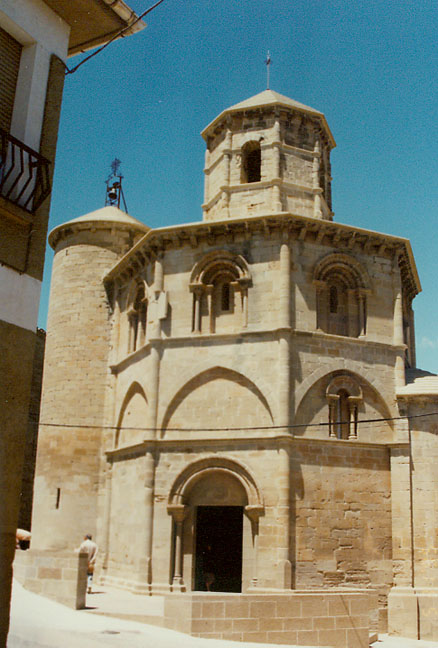 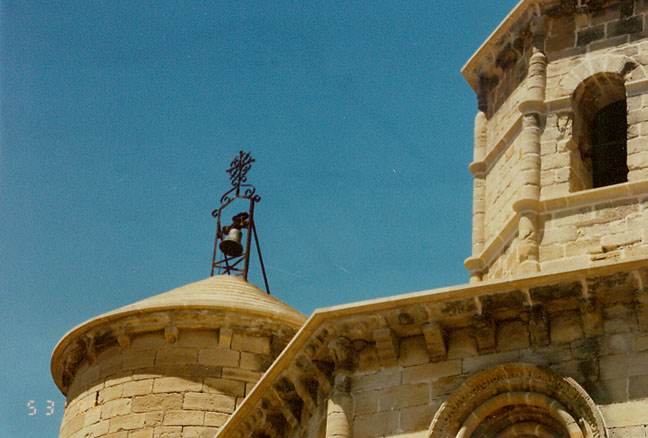 One of the representative Romanesque main fronts is to be found in the church of San Miguel. The figure of the Pantócrator (a representation of Jesus Christ in his majesty) inside the mandorla and the tetramorphs (figures of the four evangelists) are some of the most representative and characteristic features of the late Romanesque period. A Flemish Gothic carving of San Miguel and a reredos from the 18th century are some of the key points inside. 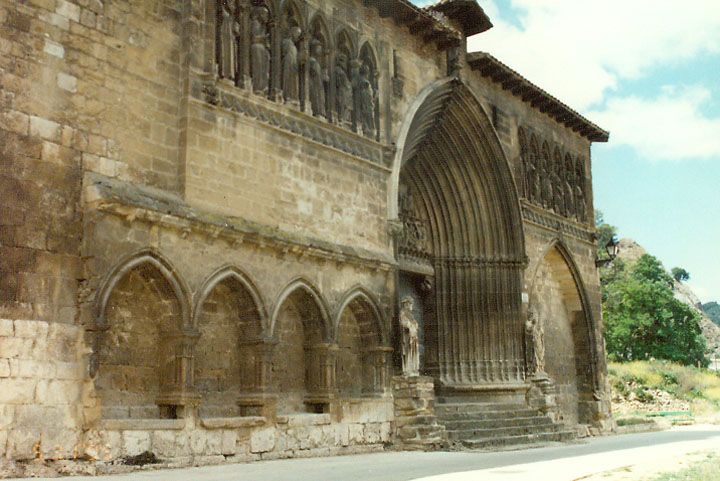 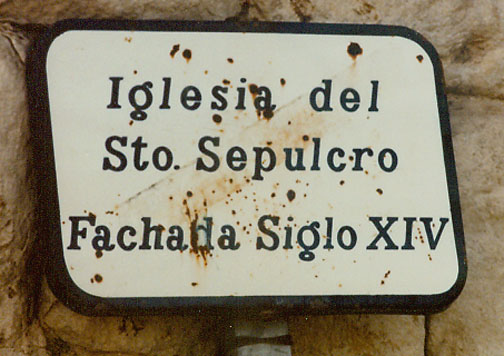 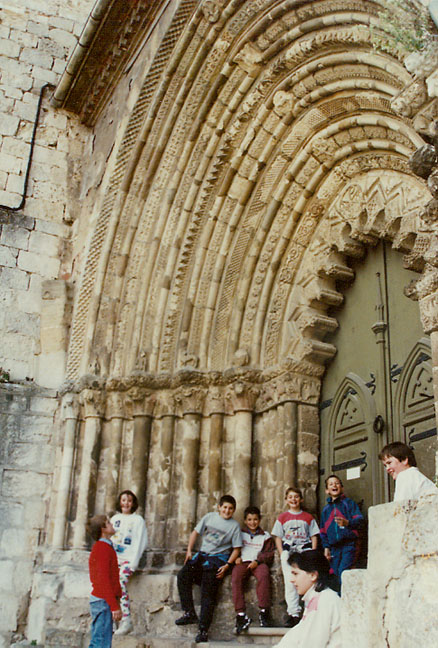 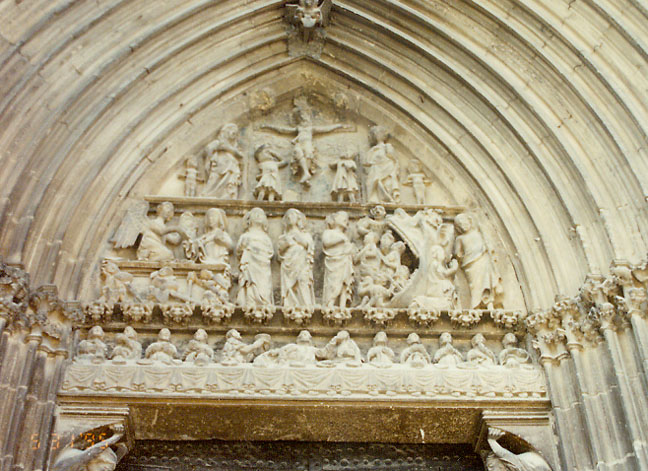 Major examples of Estella's Gothic architecture are the church of Santo Sepulcro and the Convent of Santo Domingo. The evolution between the late Romanesque and early Gothic periods can be appreciated on the main front of the Santo Sepulcro. Twelve archivolts flanked by two rows of apostles and a tympanum with sculptures of the life and death of Christ are the most striking features on its main front. The convent, meanwhile, has a single extended nave. 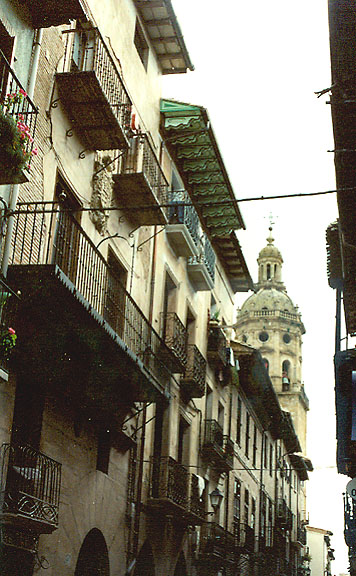 The historic quarter, on both sides of the river Ega, which is crossed via the Prison Bridge, also has Renaissance palaces such as San Cristóbal (today the Fray Diego de Estella Arts Centre), and baroque constructions, such as the Courthouse.

Plaza de los Fueros is the centre of the city, the place where the traditional market is held and where the Neoclassic façade of the church of San Juan stands. The square and the surrounding streets house the medieval market, when all the stallholders dress in period costume and offer their wares as in years gone by. The convent of Recoletas, the ruins of San Pedro de Lizarra and the Basilica of Nuestra Señora del Puy are the next stops. It is a modern church of Gothic inspiration built in the 1950s which houses a silver-plated Gothic carving of the city's patron. The Paseo de los Llanos walk, running parallel to the river, leads us to the convent of Santa Clara and on the road to La Rioja, the church of Nuestra Señora de Rocamador. 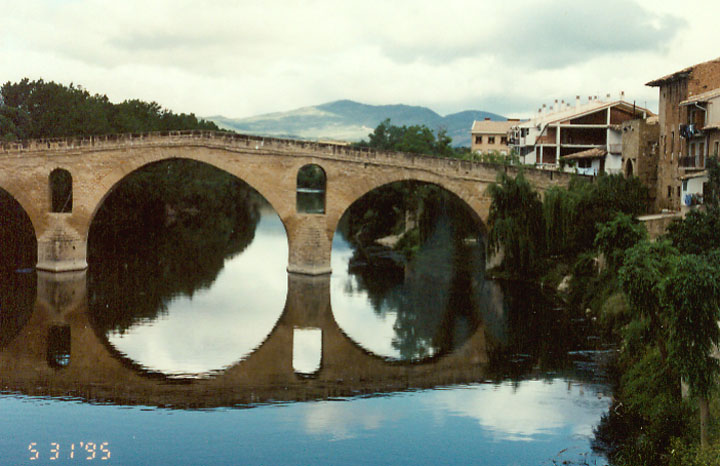 bridge used by the Pilgrim's Road to Santiago de Compostela 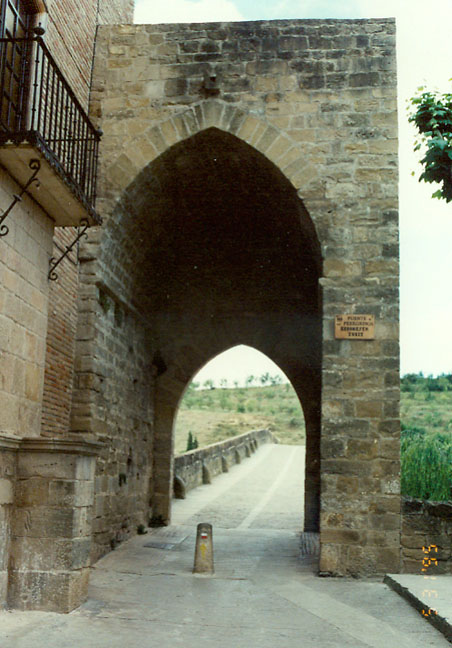 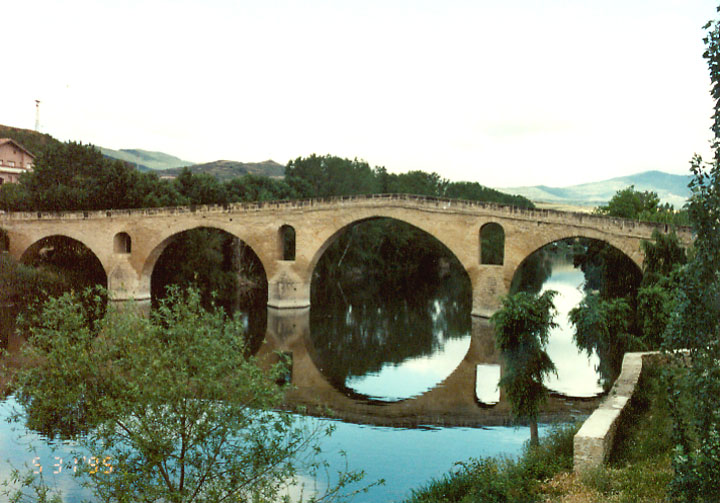 Navarre to the full Navarre offers us beautiful natural landscapes, among which are various protected reserves. To the west, the Urbasa and Andía Nature Reserve. To the north, the villages and valleys of the Navarre Pyrenees provide some of the most beautiful landscapes in the entire province. In the Atlantic Pyrenees, the most western, are major natural spaces, such as the Bertiz Nature Reserve.

One of the most important valleys is Baztán, which stretches out surrounded by mountains and with villages such as Berroeta, Aniz, Ziga, etc., all of them with a large number of medieval towers and palaces. Good examples of these constructions can be found in the capital of the valley, Elizondo, from where it is possible to go on to visit Urdax and Zugarramurdi, these latter places known for their caves and for being the old site of sorcerers' covens. 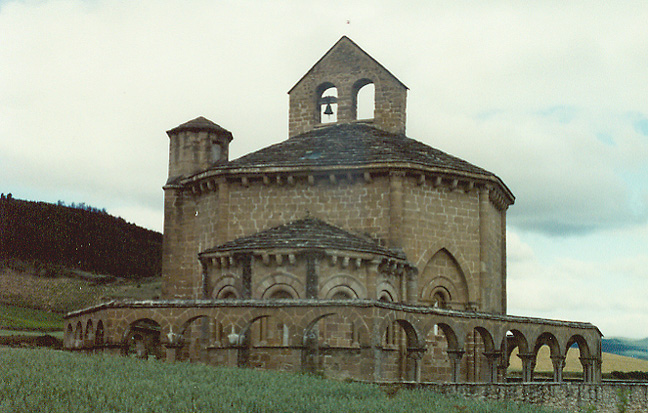 church on the Pilgrim's Road to Santiago de Compostela 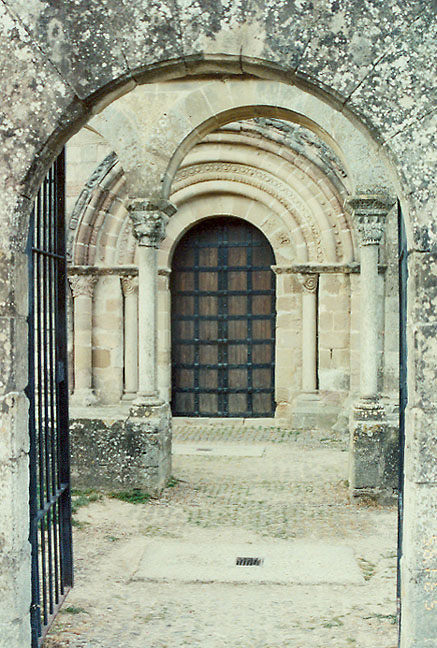 the entrance for overnight shelter and prayer 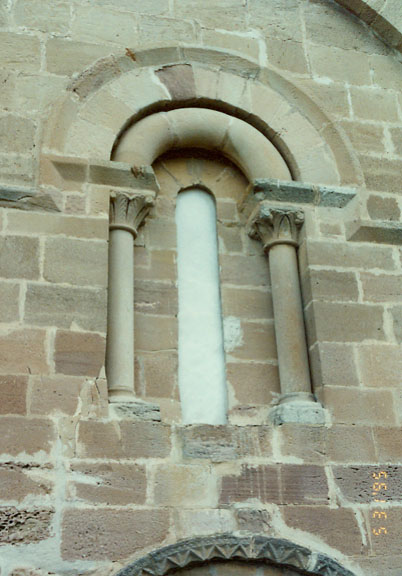 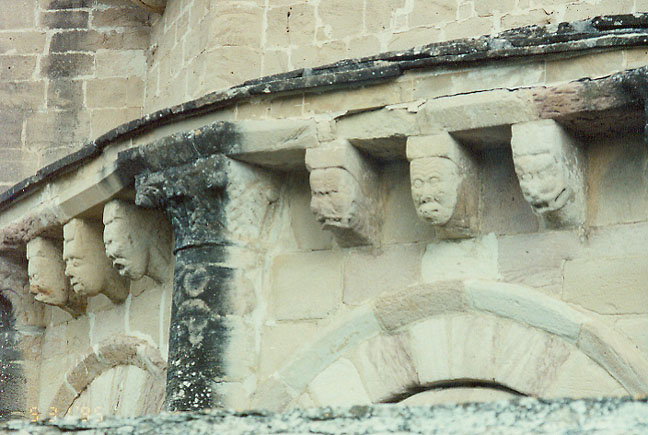 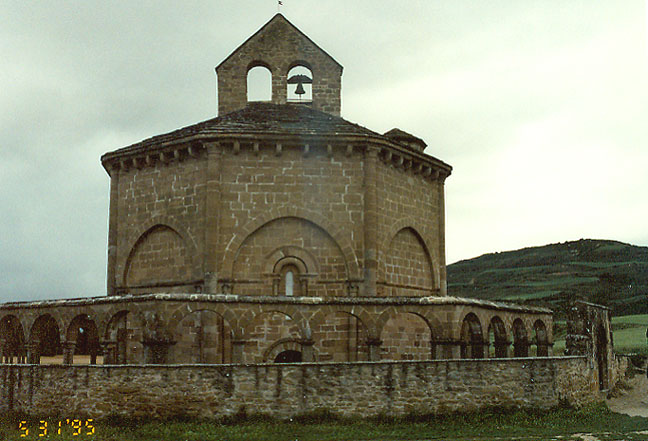 In the Eastern Pyrenees the main feature is the Pilgrim's Road to Santiago de Compostela. Coming down from France, it enters Navarre until reaching Roncesvalles, a town established as a sanctuary and hospital in 1132 and a first staging post for pilgrims. Following the mountain chain eastwards is the Selva de Irati, a unique natural area which is host to one of the largest beechwoods in the south of Europe. Another point of interest in the eastern Pyrenees is Valle de Salazar and Ochagavía, the most populated town in this area. 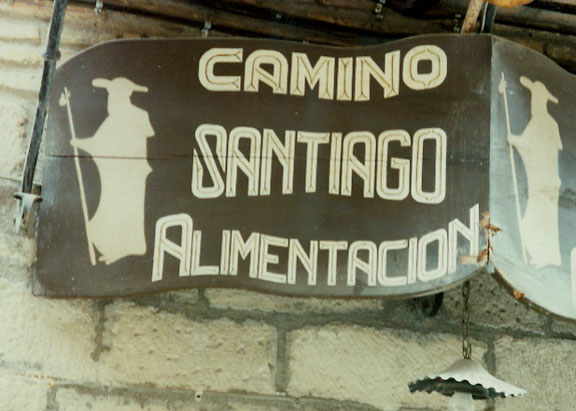 provisions along the Pilgrim's Road to Santiago de Compostela

Any of these places are ideal to sample the delights of the varied gastronomy of Navarre and taste the traditional produce of Navarre's fertile fields –asparagus, "piquillo" red peppers, beans-. Roast lamb or lamb cooked with tomatoes and peppe 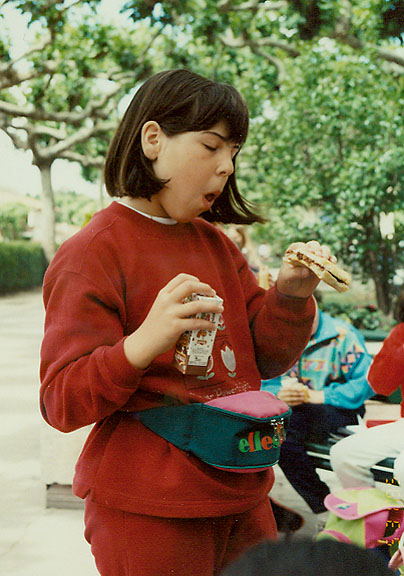 modern day Pilgrim having a snack