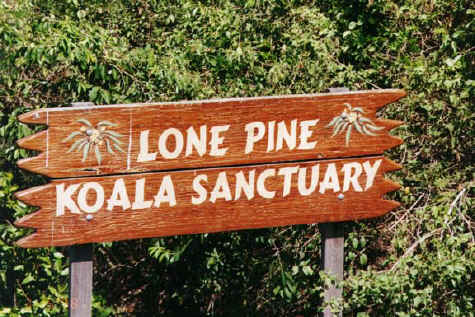 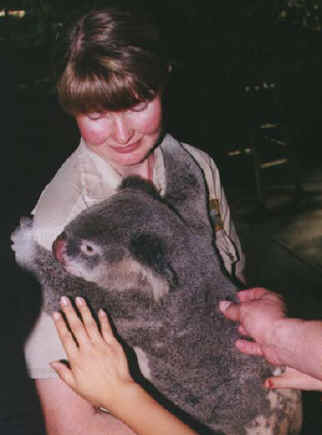 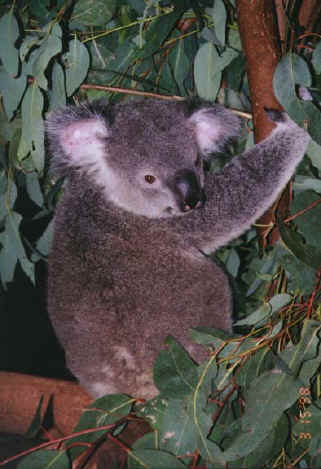 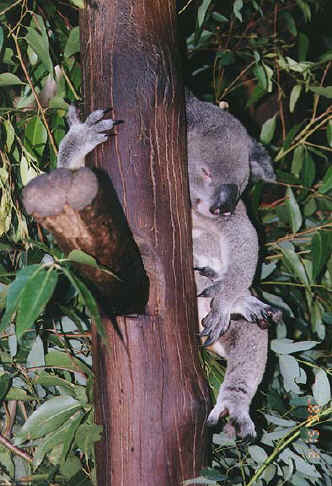 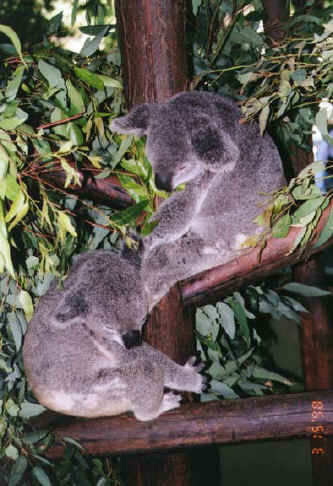 (Phascolarctos cinereus), arboreal “bear” of coastal eastern Australia, a marsupial mammal belonging to the family Phalangeridae, sometimes considered a separate family, Phascolarctidae. The koala is about 60 to85 centimetres (21 to 33 inches) long and virtually tailless, with a stout, pale gray or yellowish body; broad face; big, round leathery nose; small, yellow eyes; and fluffy ears. Its feet are strong-clawed, and the two innermost digits of the front foot in addition to the innermost digit of the hind foot are opposable. The koala feeds, very selectively, on eucalyptus leaves. To aid in digesting about 1.3 kilograms (3 pounds) of leaves daily, it has a caecum (intestinal pouch) about 7 metres (23 feet) long. Unlike other tree-dwelling marsupials, the koala has a pouch opening rearward. It bears one offspring at a time; the youngster remains in the pouch for as long as seven months, clings to the mother's back until it is about a year old, and is weaned on the mother's excreta. A koala may live to about 20 years of age.

Formerly killed for their fur and decimated further by disease, koalas dwindled in numbers from several million to a few hundred thousand, and they continue to decline because of human encroachments upon their natural habitats and because of the continued spread of disease. 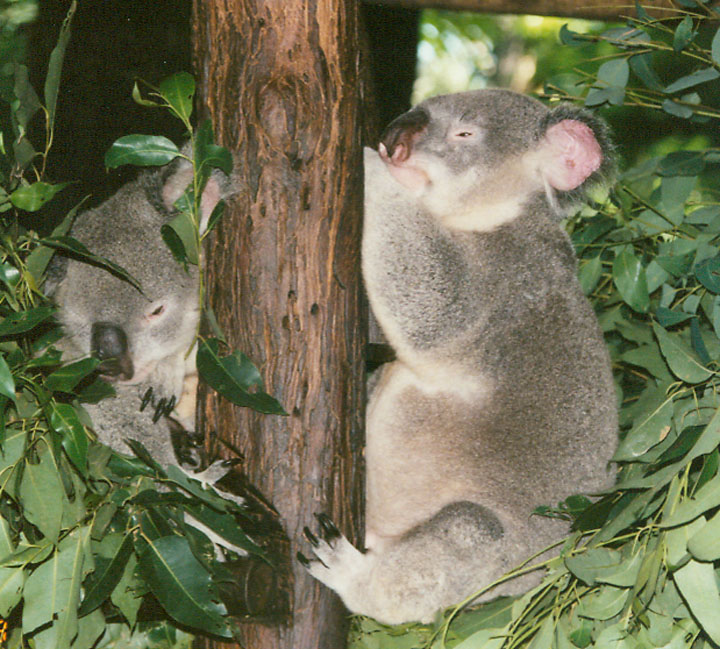 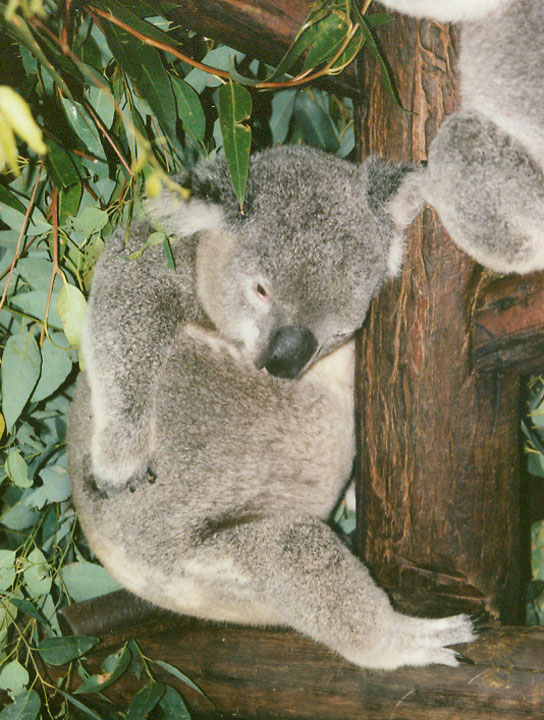 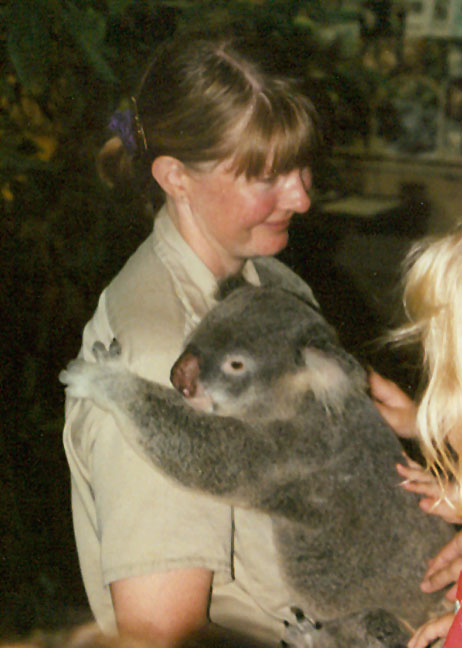 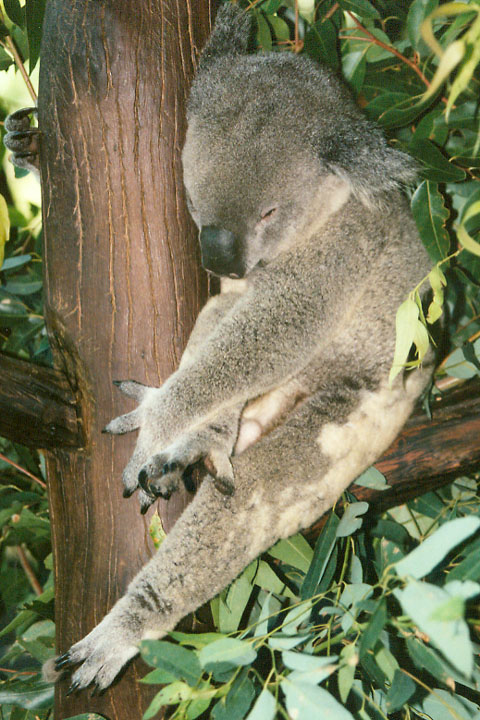 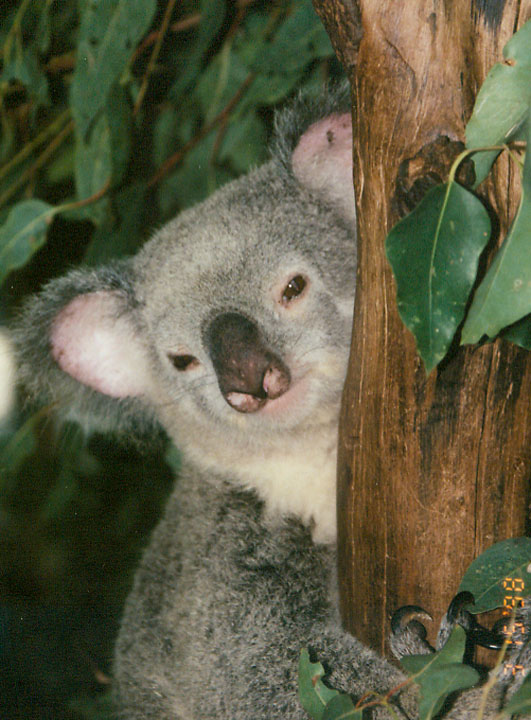 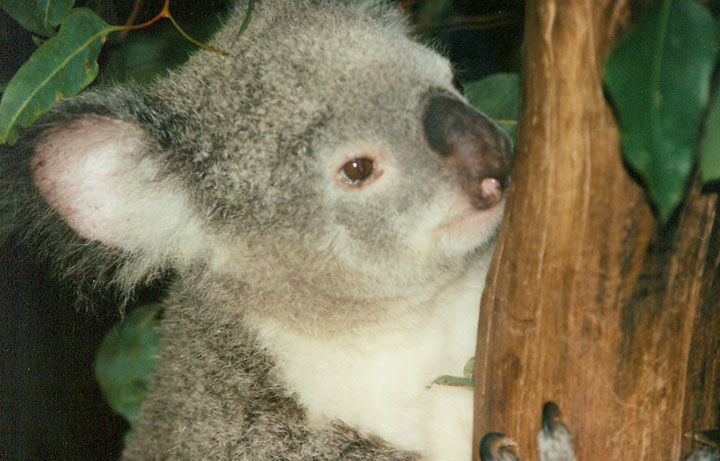 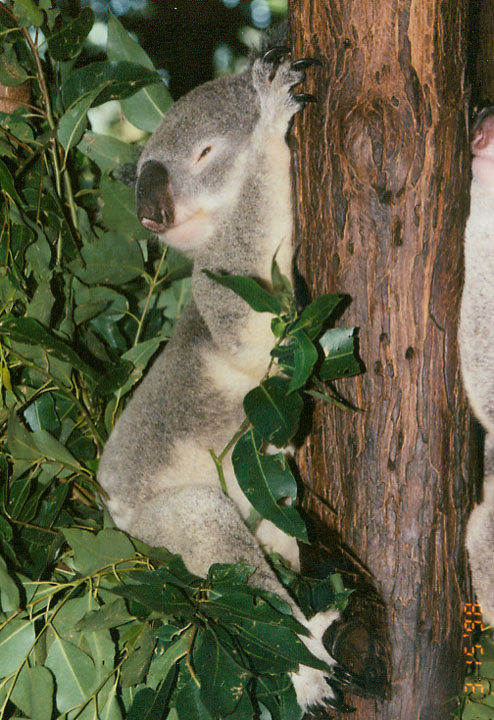 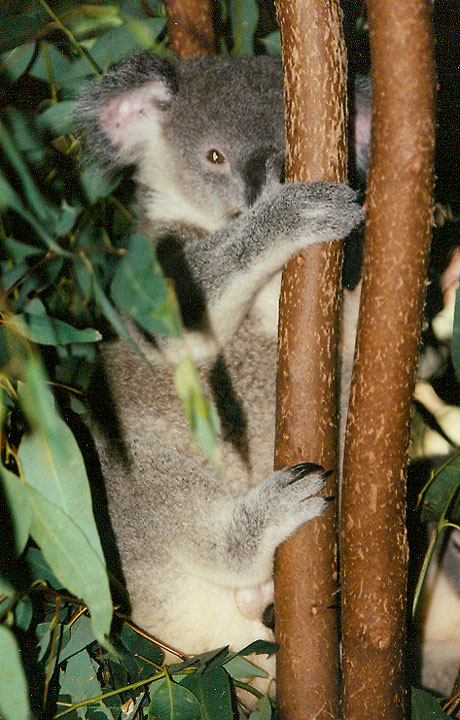 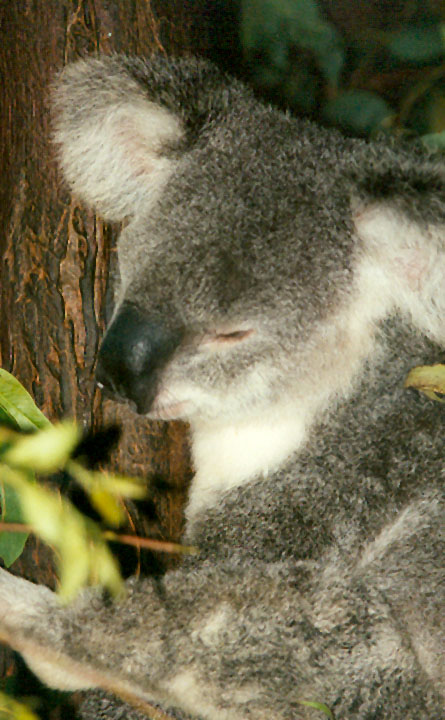 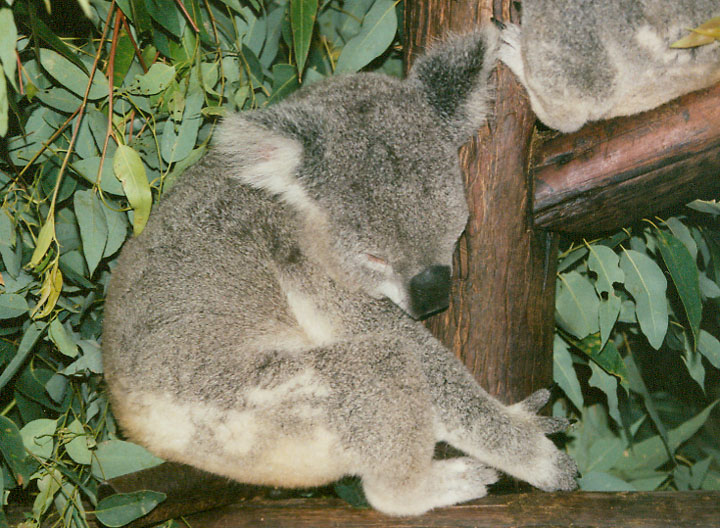 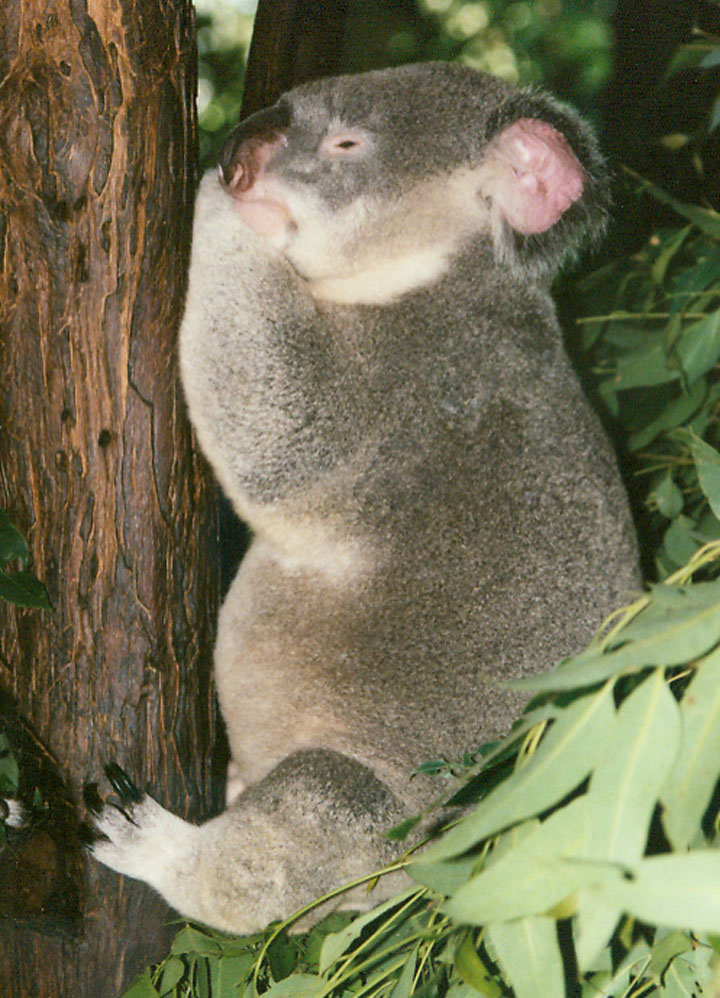 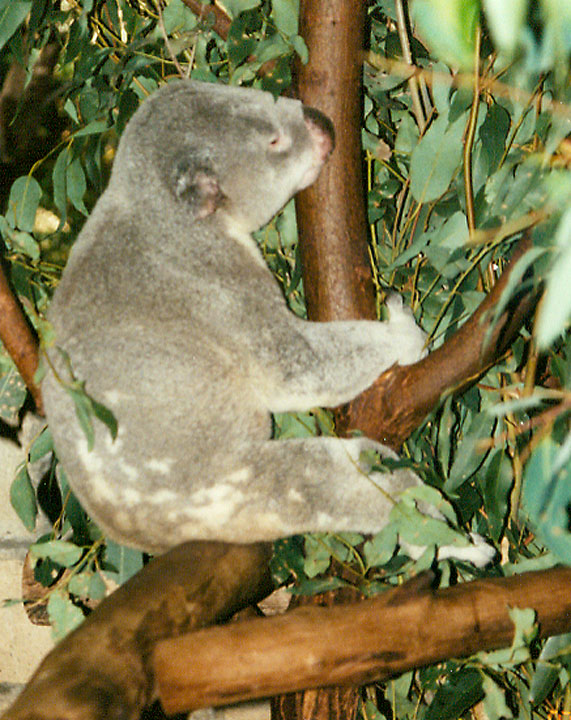 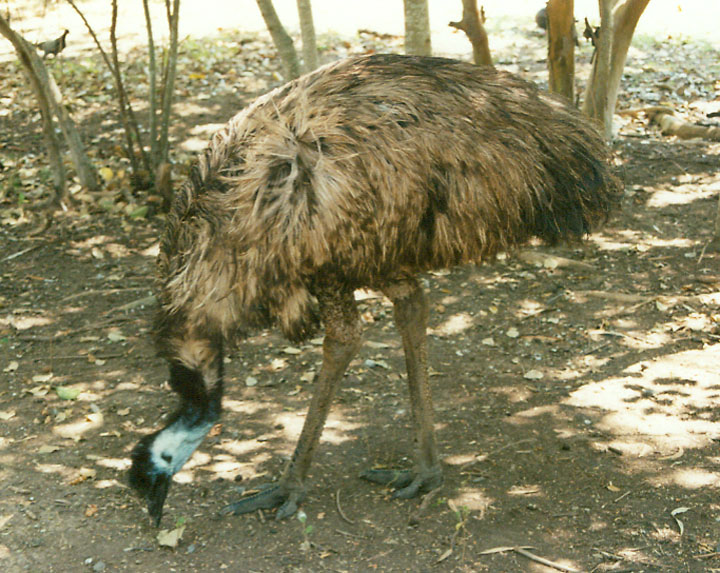 flightless bird of Australia and second largest living bird: the emu is more than 1.5 m (5 feet) tall and may weigh more than 45 kilograms (100 pounds). The emu is the sole living member of the family Dromaiidae (or Dromiceiidae) of the order Casuariiformes, which also includes the cassowaries.

The common emu, Dromaius (or Dromiceius) novaehollandiae, the only survivor of several forms exterminated by settlers, is stout bodied and long legged, like its relative the cassowary. Both sexes are brownish, with dark-gray head and neck. Emus can dash away at nearly 50 kilometres per hour (30 mph); if cornered they kick with their big, three-toed feet. Emus mate for life; the male incubates from 7 to 10 dark-green eggs, 13 centimetres (5 inches) long, in a ground nest for about 60 days. The striped young soon run with the adults. In small flocks emus forage for fruits and insects but may also damage crops. The peculiar structure of the trachea of the emu is correlated with the loud booming note of the bird during the breeding season. Three subspecies are recognized, inhabiting northern, southeastern, and southwestern Australia; a fourth, now extinct, lived on Tasmania. 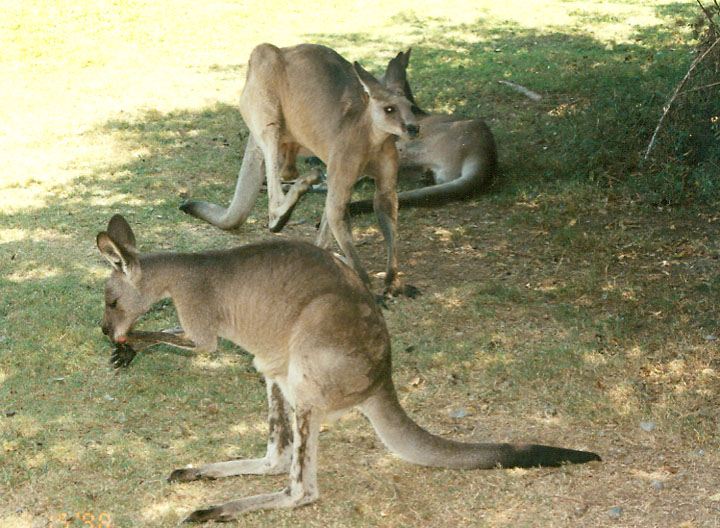 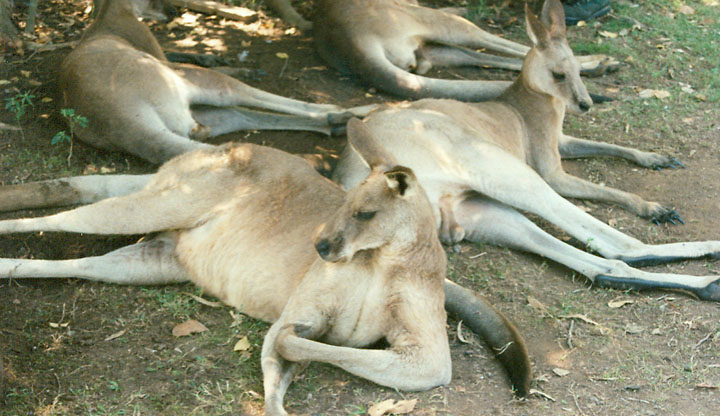 The gray kangaroo, is found mostly in open forests of eastern and southwestern Australia and Tasmania. It is long-haired and silvery gray in eastern coastal regions but short-haired and dark gray inland. The red kangaroo, which is found throughout Australia's interior grasslands, is the largest and most powerful species. A male may attain a head-body length of 1.5 m (5 feet); have a tail 1 m (3 feet) long; stand 2 m (6 feet) tall; and weigh 90 kg (200 pounds). A gray kangaroo can clear more than 9 m (30 feet) at a bound—13.5 m (44 feet) has been recorded—and attain a speed of 48 kilometres per hour (30 miles per hour). The wallaroo, a smaller and stockier animal, may be dark gray to pinkish brown; it lives in rocky country throughout Australia except Victoria. These large kangaroos travel in groups (mobs) under the leadership of the largest male (“old man,” or “boomer”), which dominates younger rivals by biting, kicking, and boxing.

Return to Photos of Australia