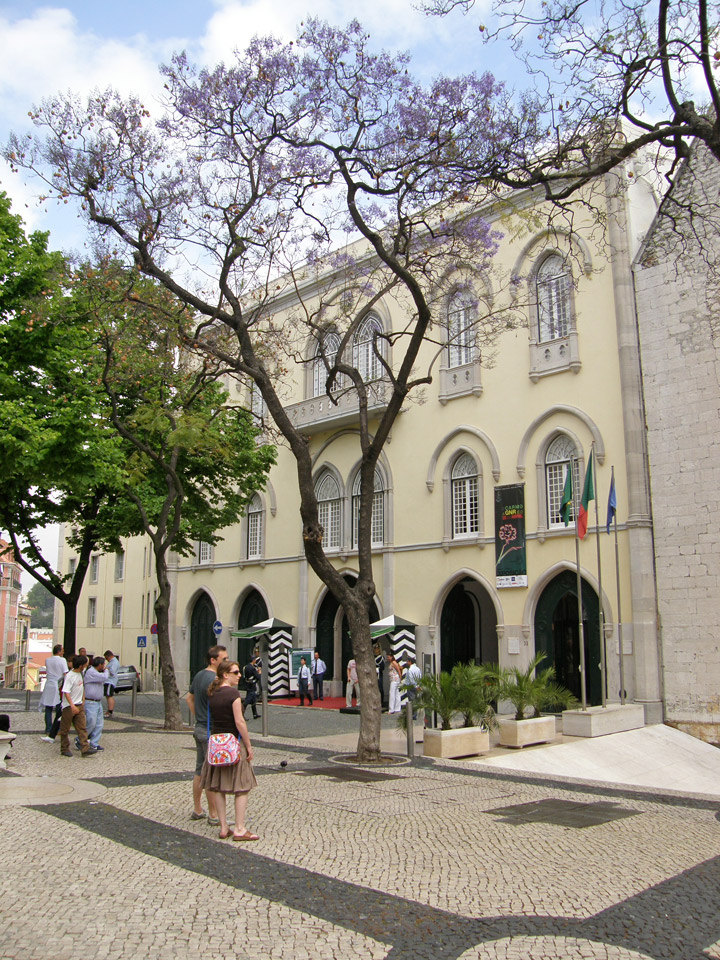 The Carmo Convent (Portuguese: Convento da Ordem do Carmo) is a monument located in the city of Lisbon, in Portugal. The mediaeval convent was ruined in the 1755 Lisbon Earthquake, and the ruins of its Gothic church (the Carmo Church or Igreja do Carmo) are the main trace of the great earthquake still visible in the city. 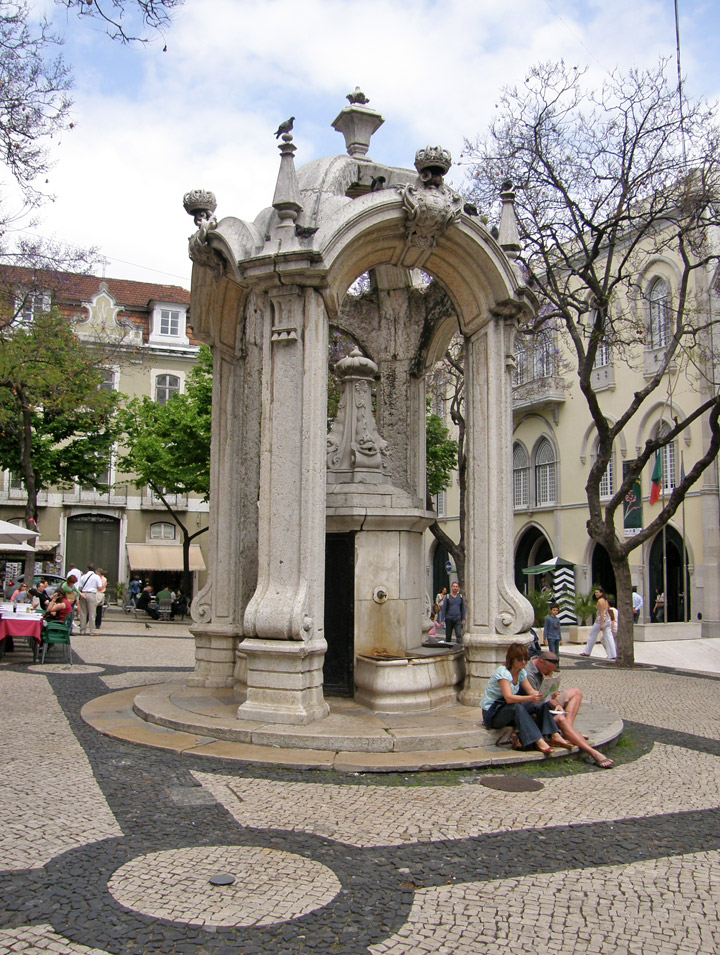 The Carmo Convent is located in the Chiado neighbourhood, on a hill overlooking the Rossio square and facing the Lisbon Castle hill. It is located in front of a quiet square (Carmo Square), very close to the Santa Justa Lift. 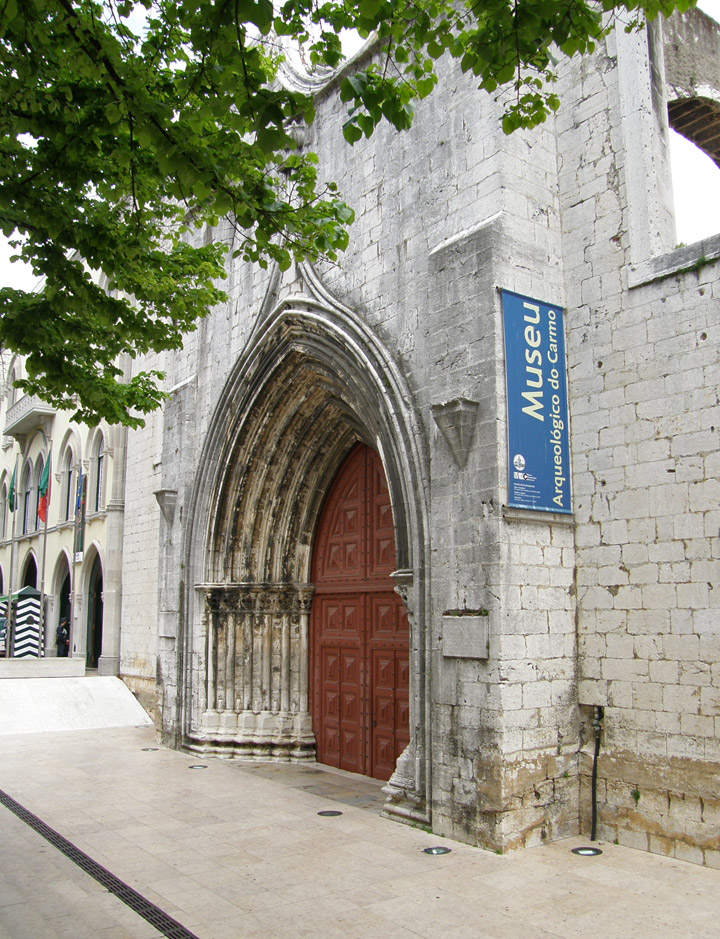 Nowadays the ruined Carmo Church is used as an archaeological museum (the Museu Arqueológico do Carmo or Carmo Archaeological Museum). 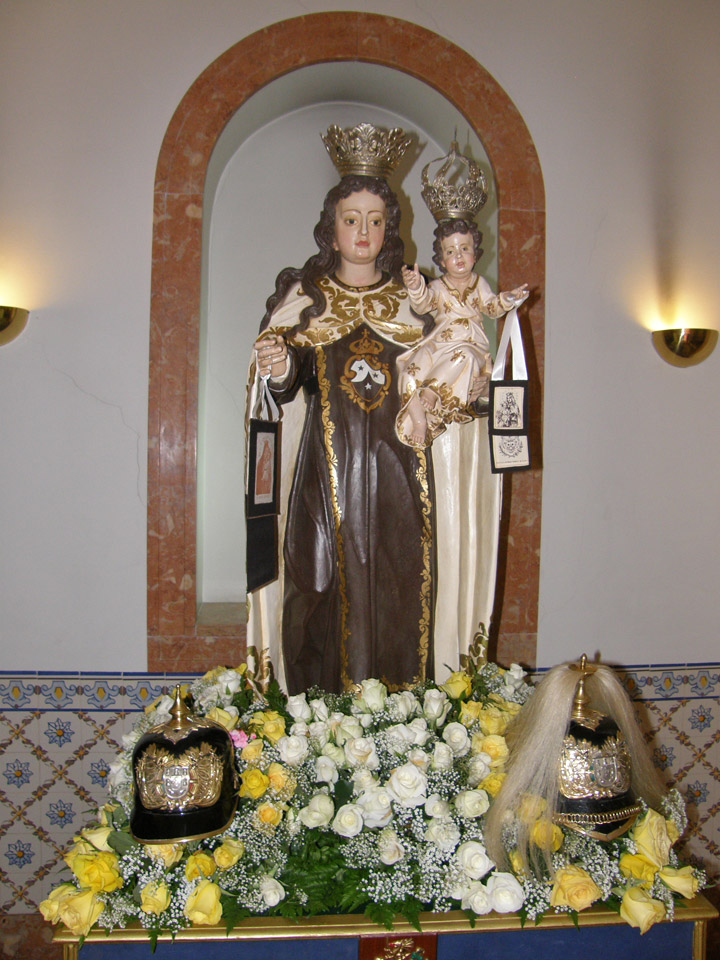 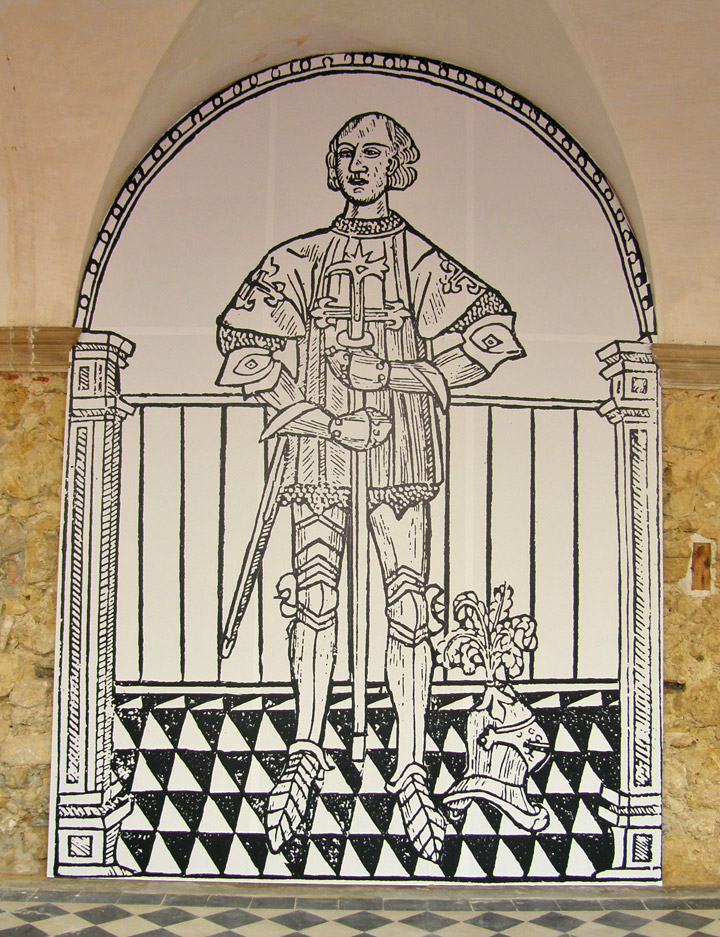 The Carmo Convent was initially inhabited by Carmelites from Moura (southern Portugal), which entered the convent in 1392. In 1404, the pious Álvares Pereira donated his wealth to the convent and, in 1423, he also became a brother of the convent. 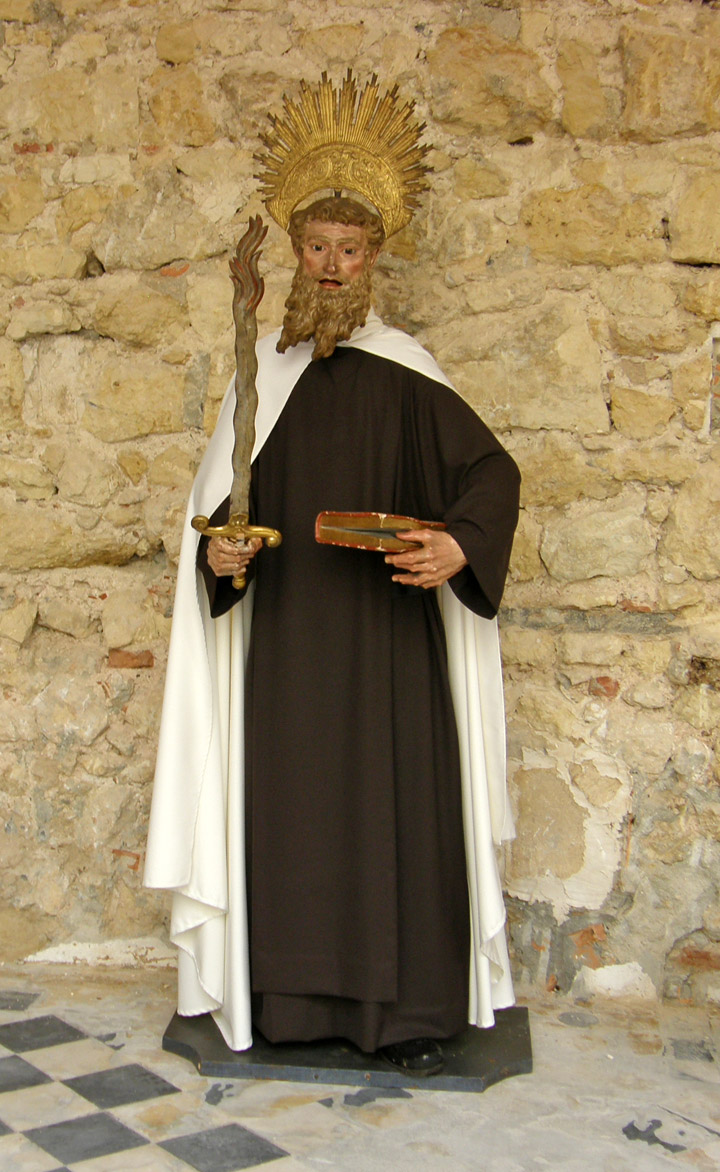 On November 1, 1755, the great earthquake destroyed most of the convent and its church. The Convent library and its 5000 books were all lost. The convent was remodelled and eventually became a military quarter. The church was never fully rebuilt and, after a period as wood storage house, it was donated in 1864 to the Association of Portuguese Archaeologists, which turned the ruined building into a museum. 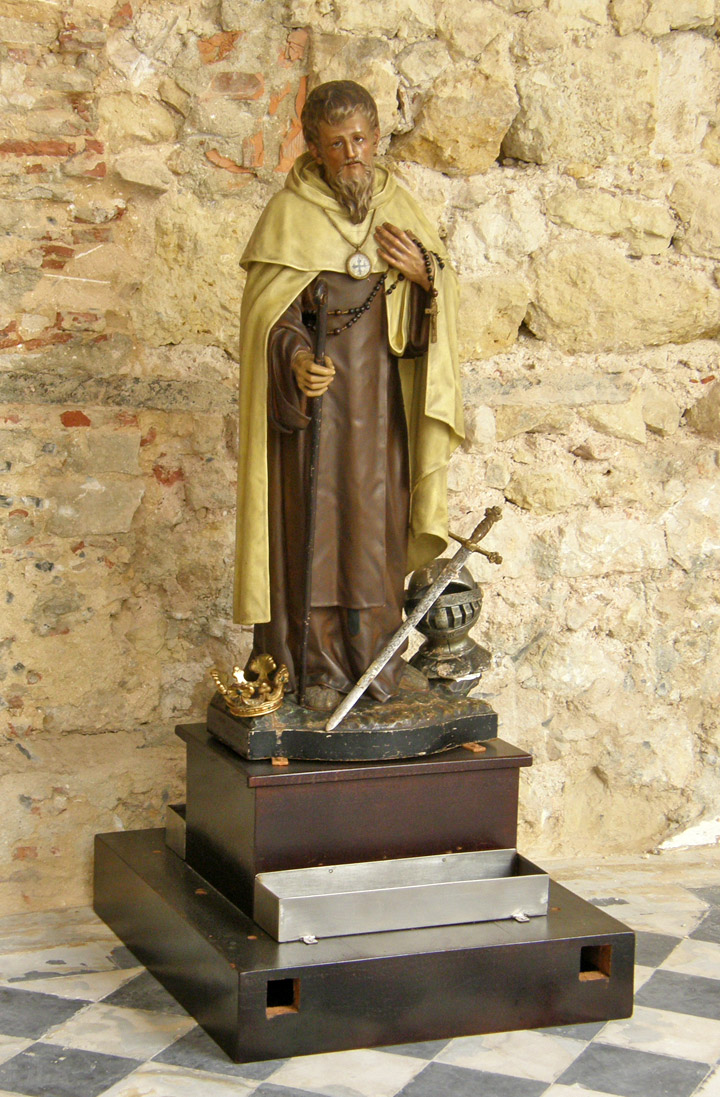 In the 20th century, during the Carnation Revolution, the Carmo Headquarters was the last stronghold of the Presidente of the Estado Novo, Marcelo Caetano, and the military loyal to him. The old Carmo Convent building is now used by the Municipal Guard (Guarda Republicana). 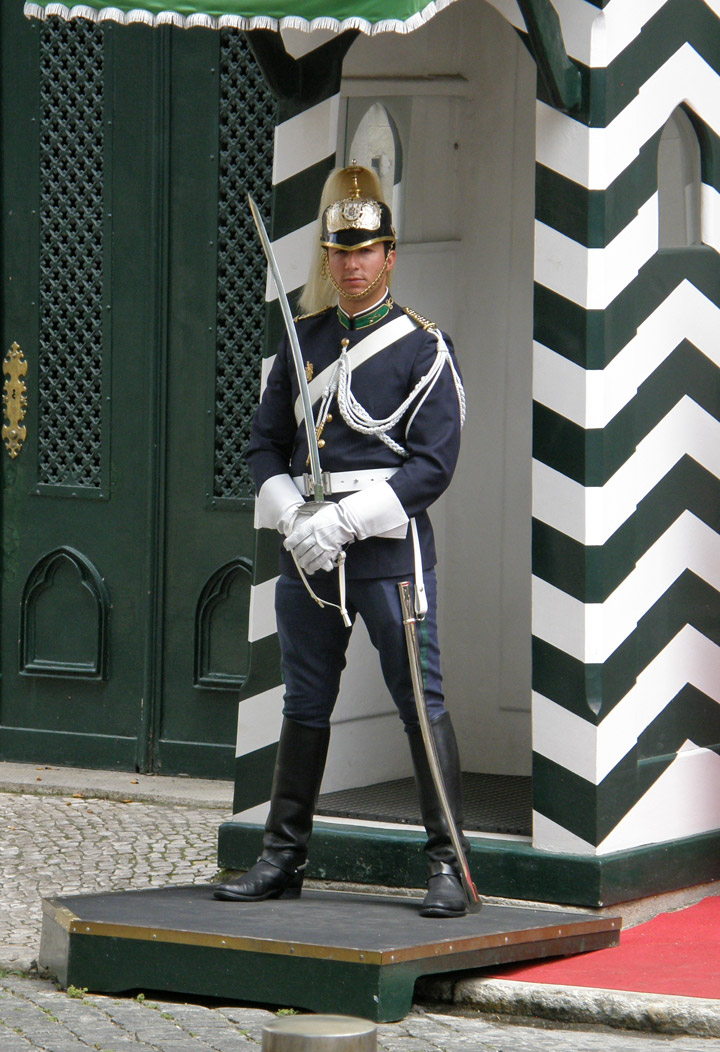 The Carmo Convent and its Church were built between 1389 and 1423 in the plain Gothic style typical for the mendicant religious orders. There are also influences from the Monastery of Batalha , which had been founded by King John I and was being built at that same time. Compared to the other Gothic churches of the city, the Carmo Church was said to be the most imposing in its architecture and decoration. 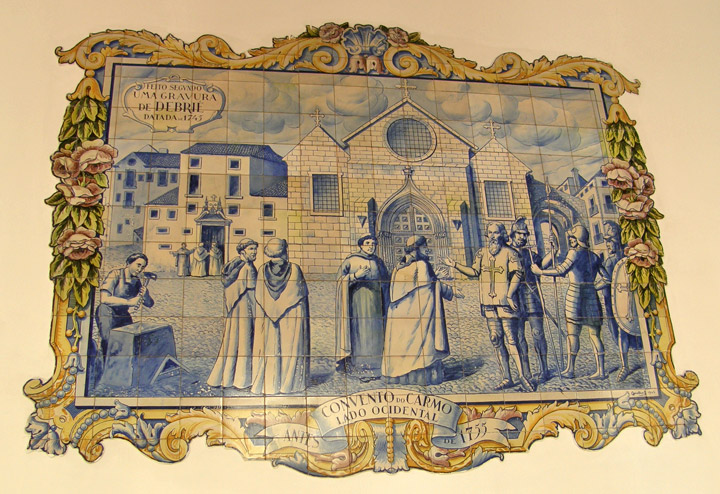 The church has a Latin cross floor plan. The main facade has a portal with several archivolts and capitals decorated with vegetal and anthropomorphic motifs. The rose window over the portal is partially destroyed. The south side of the church is reinforced by five flying buttresses, added in 1399 after the south wall collapsed during the construction work. The old convent, located to the right of the facade, has been rebuilt in neo-Gothic style in the early 20th century. 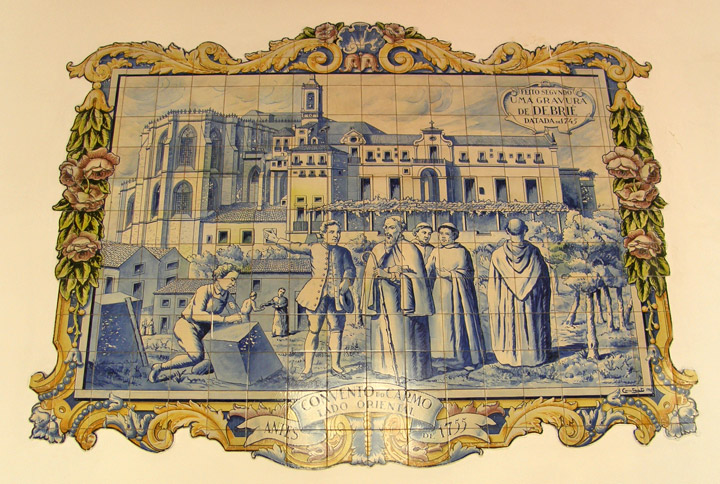 The church interior has a nave with three aisles and an apse with a main chapel and four side chapels. The stone roof over the nave collapsed after the earthquake and was never rebuilt, and only the pointed arches between the pillars have survived. 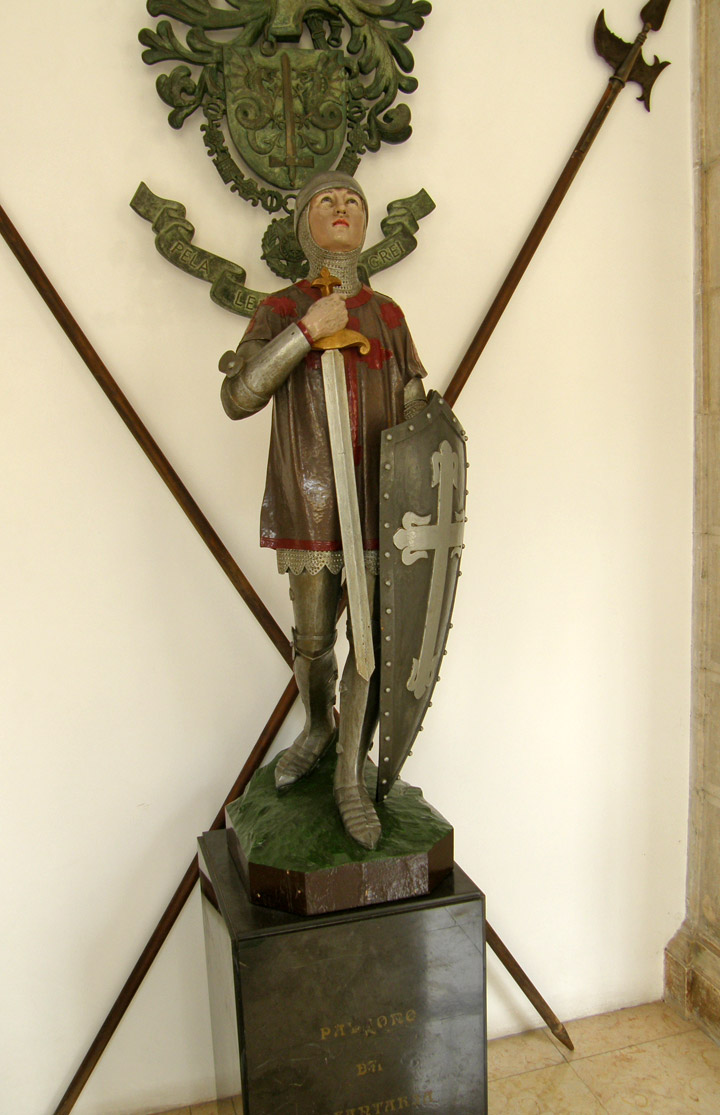 The nave and apse of the Carmo Church are the setting for a small archaeological museum, with pieces from all periods of Portuguese history. The nave has a series of tombs, fountains, windows and other architectural relics from different places and styles. 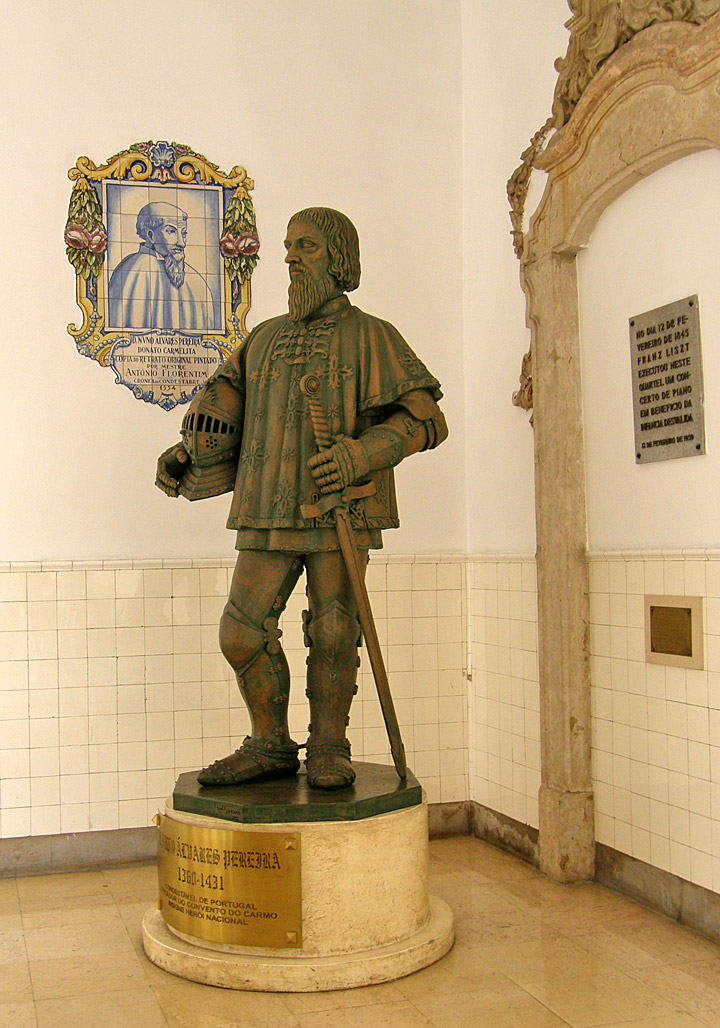 The old apse chapels are also used as exhibition rooms. One of them houses notable pre-historical objects excavated from a fortification near Azambuja (3500–1500 BC). 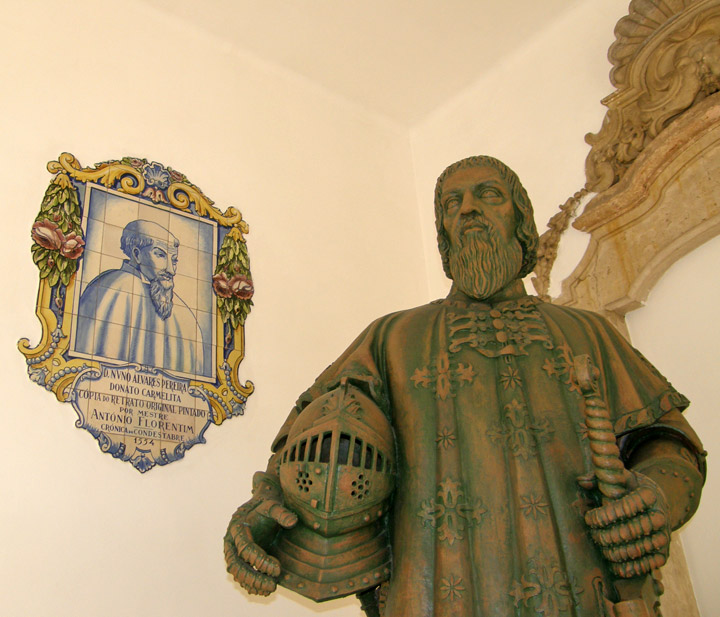 The group of Gothic tombs include that of Fernão Sanches, a bastard son of King Dinis I, (early 14th century), decorated with scenes of boar hunting, as well as the magnificent tomb of King Ferdinand I (reign 1367-1383), transferred to the museum from the Franciscan Convent of Santarém. Other notable exhibits include a statue of a 12th century king (perhaps Afonso Henriques), Spanish-Moorish azulejos and objects from the Roman and Visigoth periods. 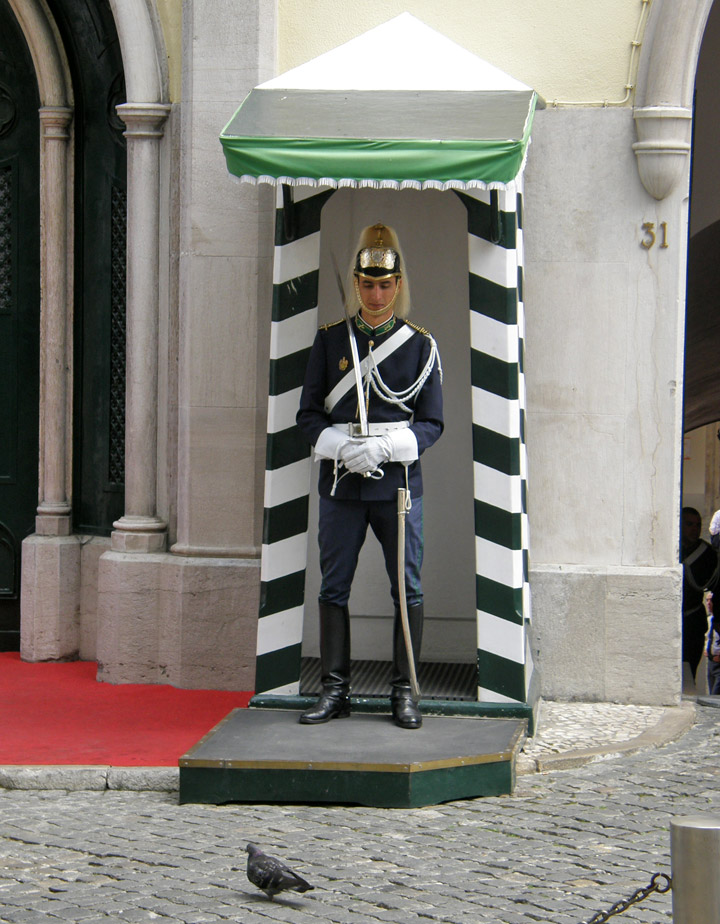 guard for the special exposition 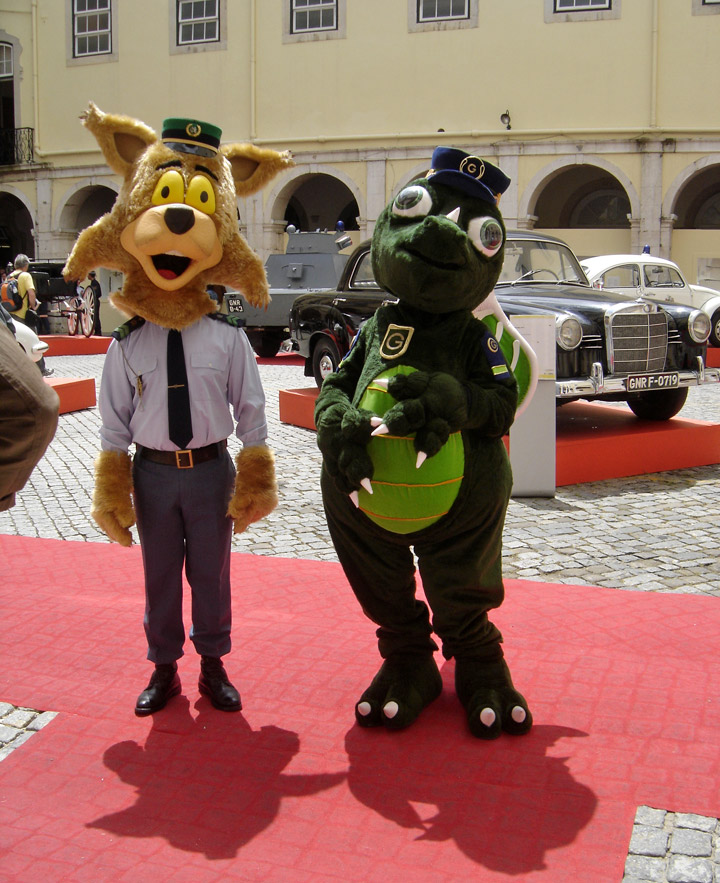 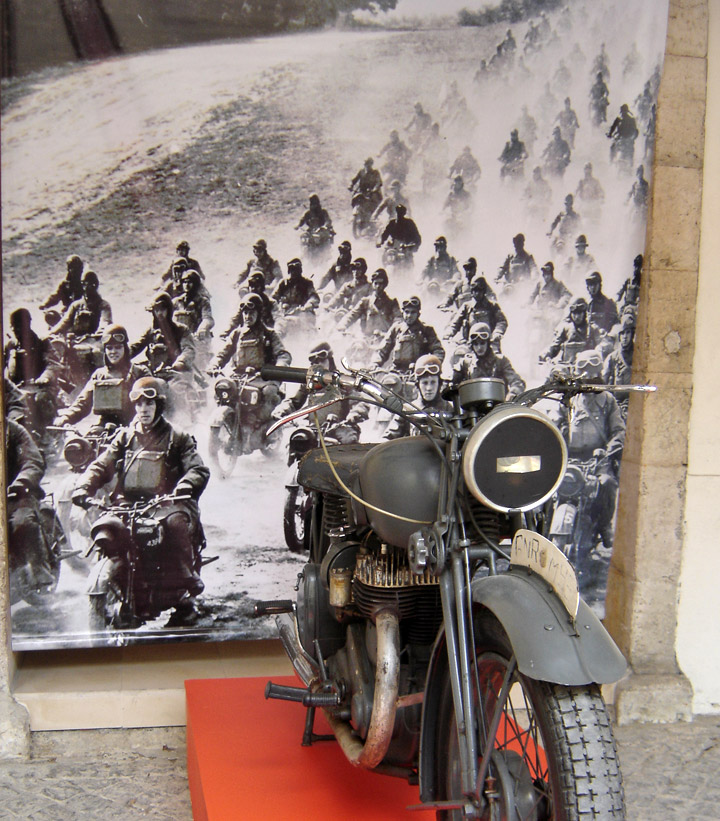 honoring of the motorcycle guarda 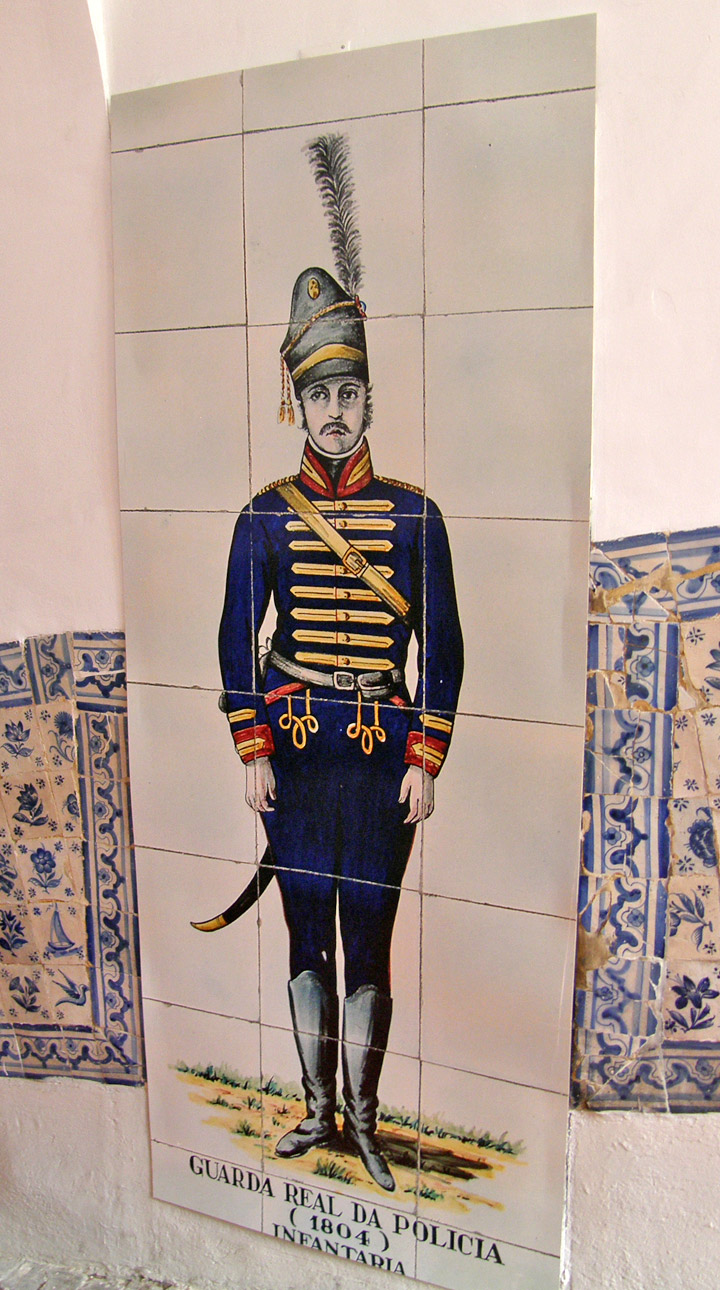 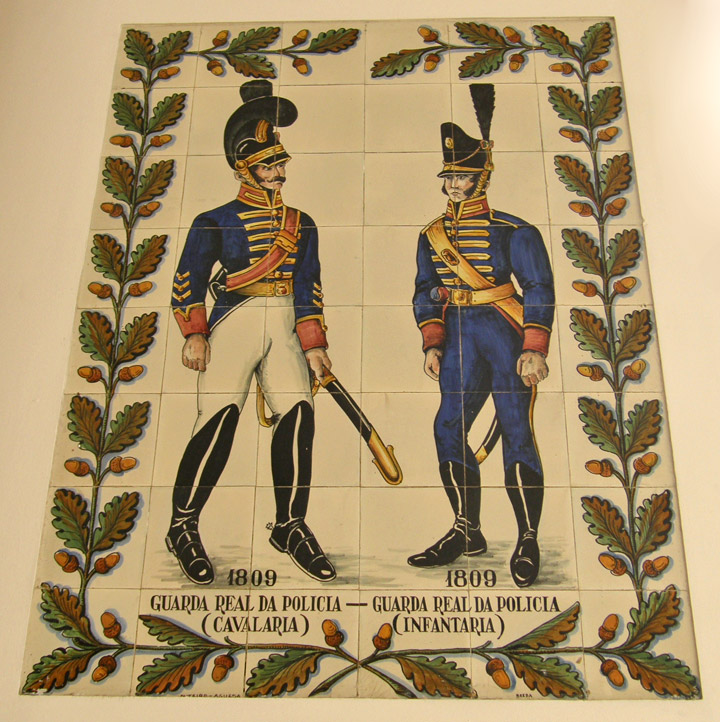 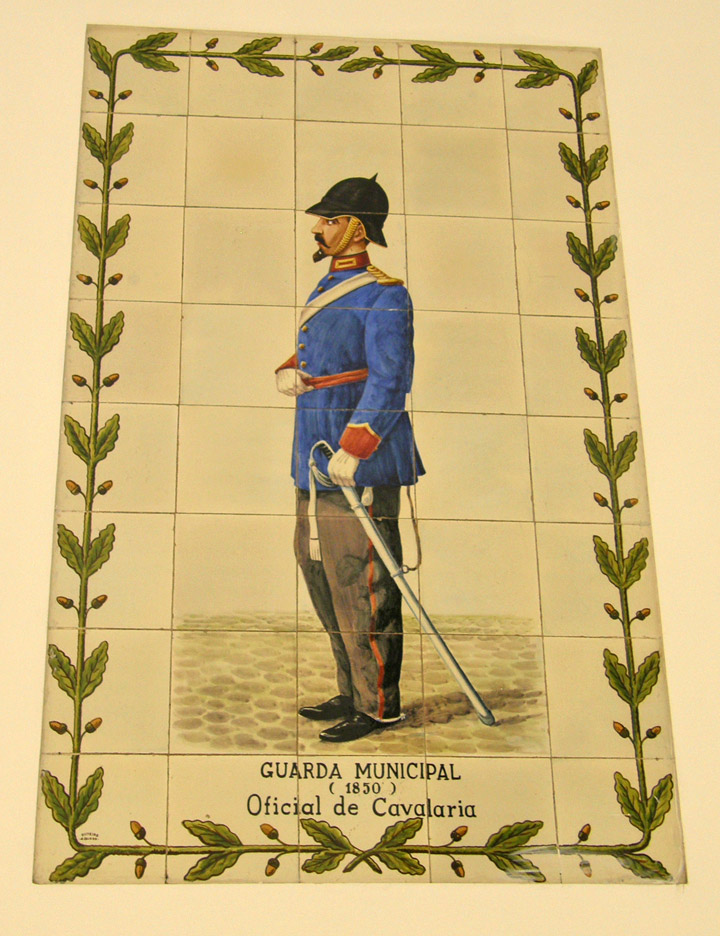 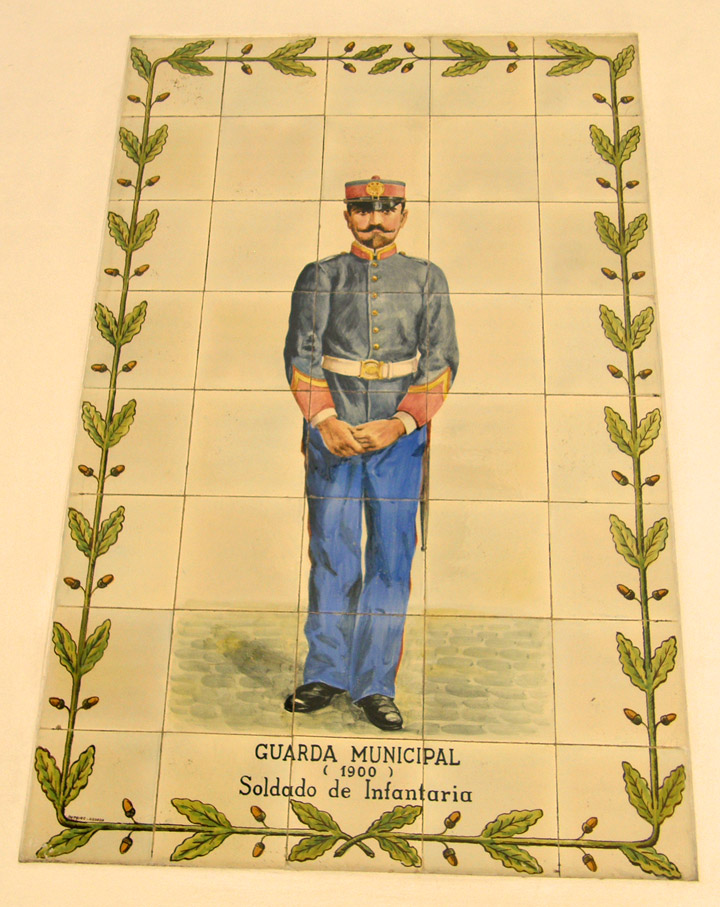 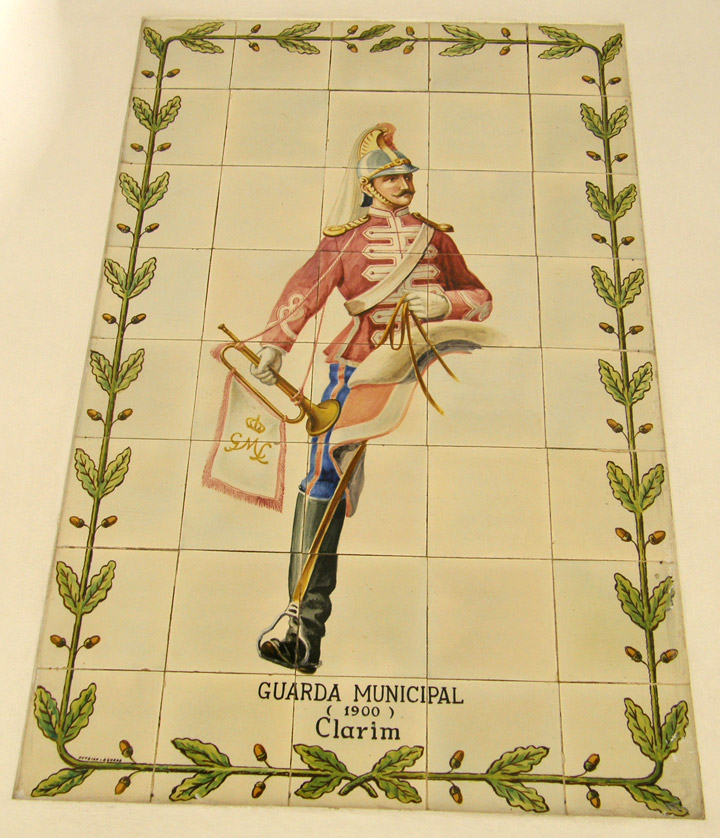 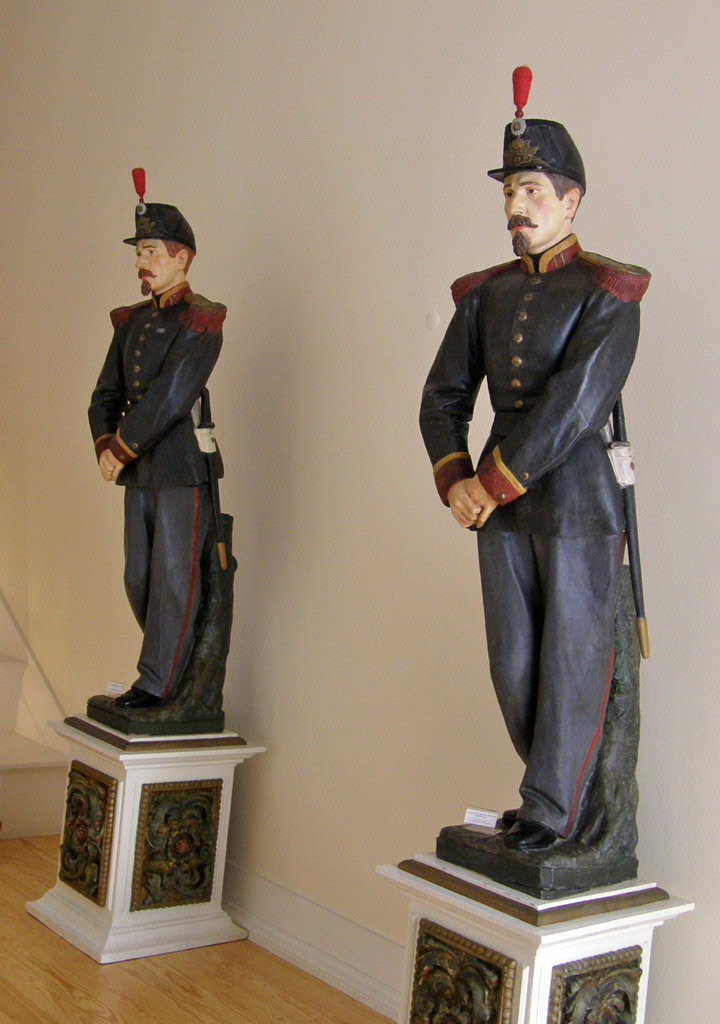 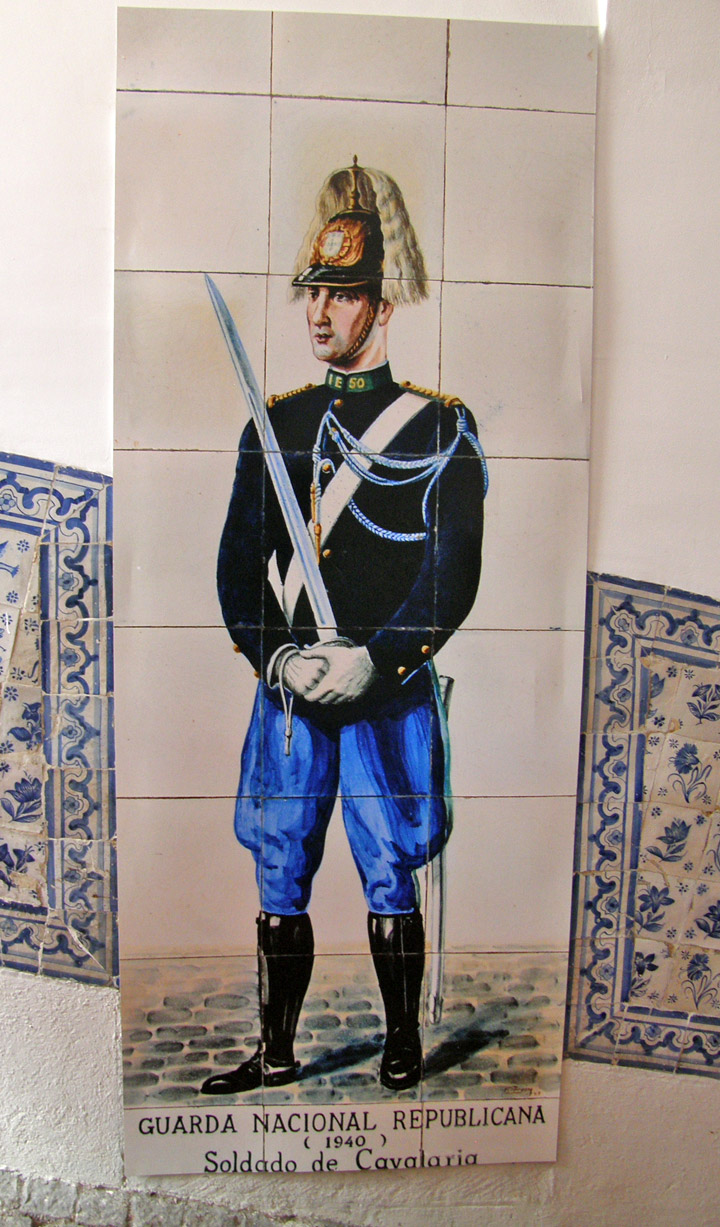