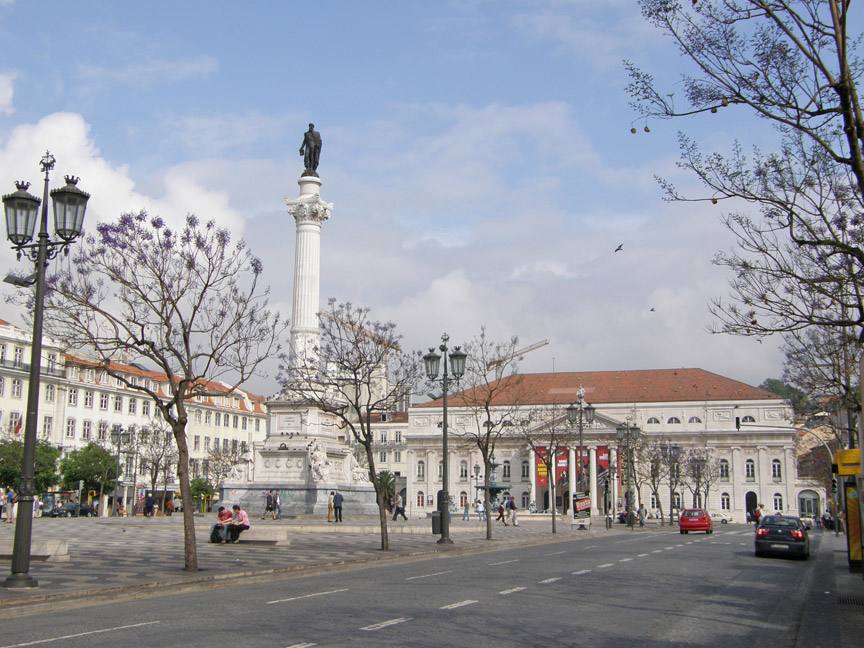 The Rossio is the popular name of the Pedro IV Square (Portuguese: Praça de D. Pedro IV) in the city of Lisbon, in Portugal. It is located in the Pombaline Downtown of Lisbon and has been one of its main squares since the Middle Ages. It has been the setting of popular revolts and celebrations, bullfights and executions, and is now a preferred meeting place of Lisbon natives and tourists alike.

The current name of the Rossio pays hommage to Pedro IV, King of Portugal as well as first Emperor of Brasil (as Pedro I). His bronze statue is seen on top of a column in the middle of the square.

The Rossio became an important place in the city during the 13th and 14th centuries, when the population of the city expanded to the lower area surrounding the Lisbon Castle hill. The name "rossio" is roughly equivalent to the word "commons" in English, and refers to a commonly owned terrain. 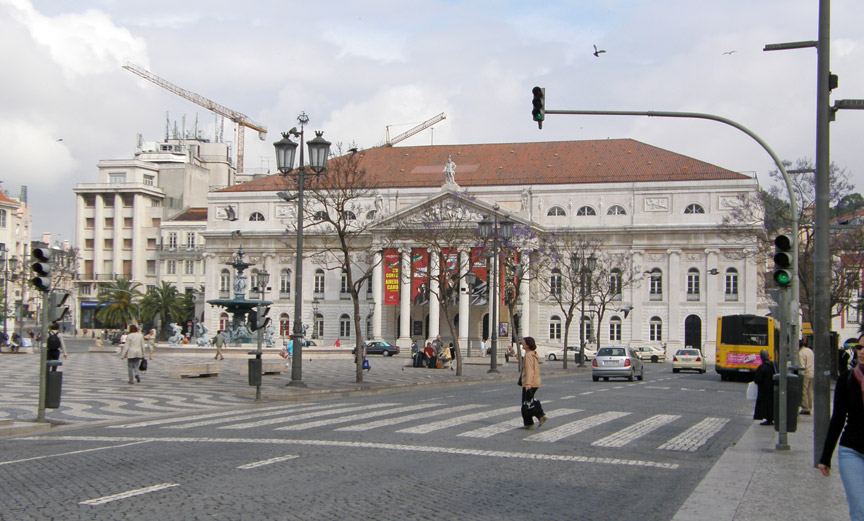 Around 1450, the Palace of Estaus, destined to house foreign dignataries and noblemen visiting Lisbon, was built on the north side of the square. After the Inquisition was installed in Lisbon, the Palace of Estaus became its seat, and the Rossio was frequently used as setting for public executions. The first auto-da-fé took place in 1540. 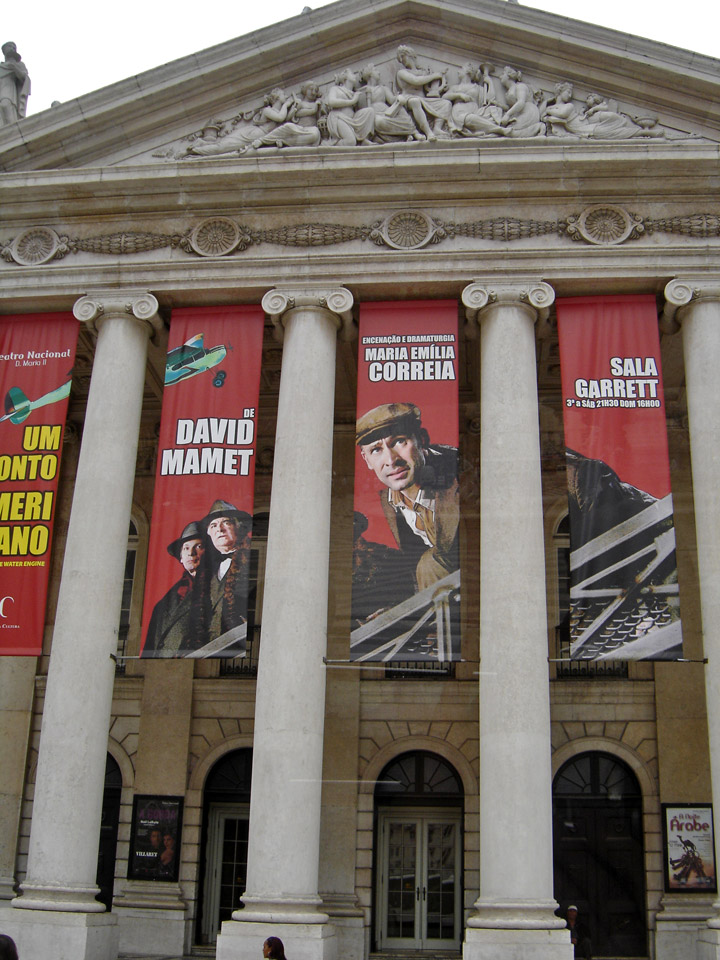 In 1492, King John II ordered the building of one of the most important civil and charitative infrastructures in old Lisbon, the All-Saints Royal Hospital (Hospital Real de Todos os Santos). The Hospital was finished in 1504, during the reign of King Manuel I, and occupied the whole eastern side of the square. Old pictures show the façade of the Hospital to consist of a long building with an arched gallery. The portal to the chapel of the Hospital, facing the Rossio, had a magnificent façade in manueline style. 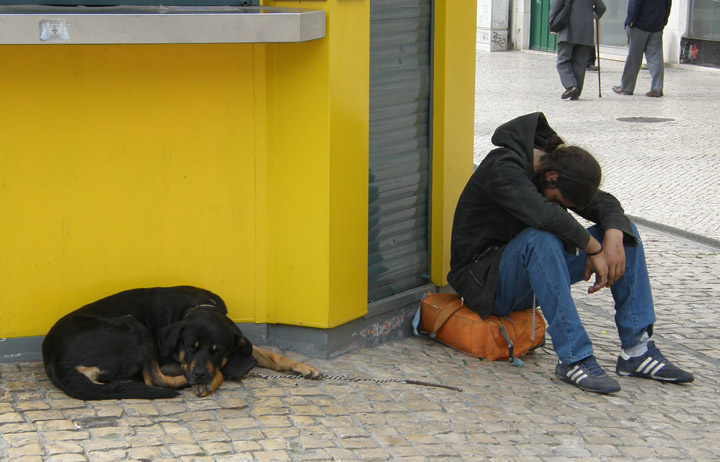 Near the northeastern corner of the square, actually in the neighboring St Domingo Square, is located the Palace of the Almadas, recognizable by its early 18th century red façade. In 1640, this Palace was the meeting point of Portuguese noblemen who conspired against Spain and led to the independence of Portugal from Spanish rule. The building is also called the Palace of the Independence for this reason. 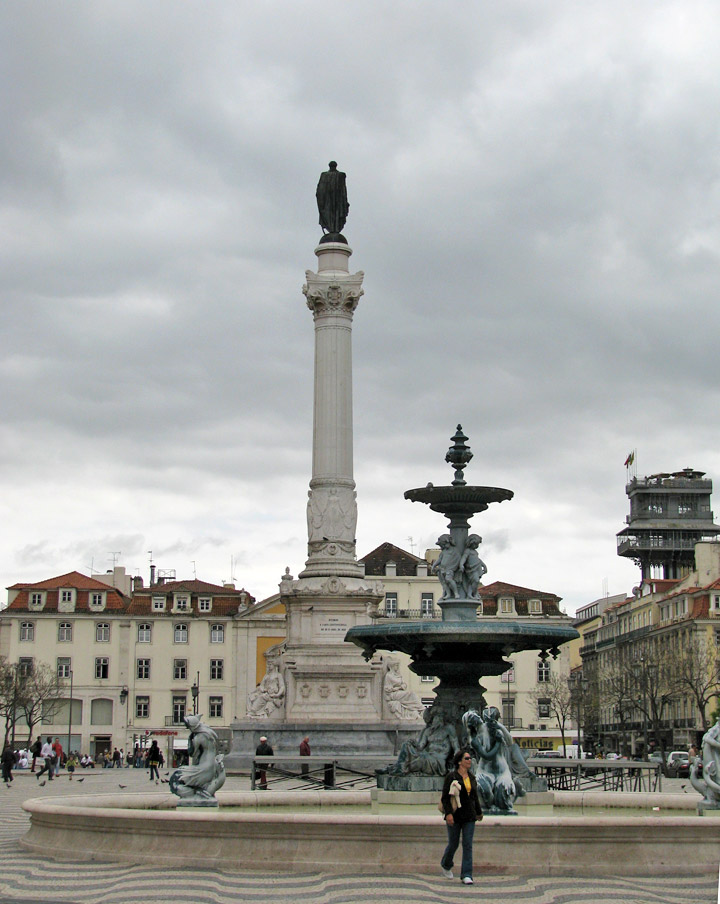 view of the Santa Justa lift

The Convent of St Domingo was established in the 13th century by the Rossio. Their church was greatly damaged by the 1755 Earthquake and was rebuilt in baroque style. Its façade dominates the small St Domingo square.

Most buildings around the Rossio date from the reconstruction of the Pombaline Downtown carried out after the great 1755 Lisbon Earthquake, which levelled most structures in the area, including the magnificent All-Saints Hospital. Only the Palace of the Independence survived the catastrophic earthquake. The rebuilding of the Rossio was undertaken in the second half of the 18th century by architects Eugenio dos Santos and Carlos Mardel, responsible for the typical Pombaline appearance of the buildings around the square. 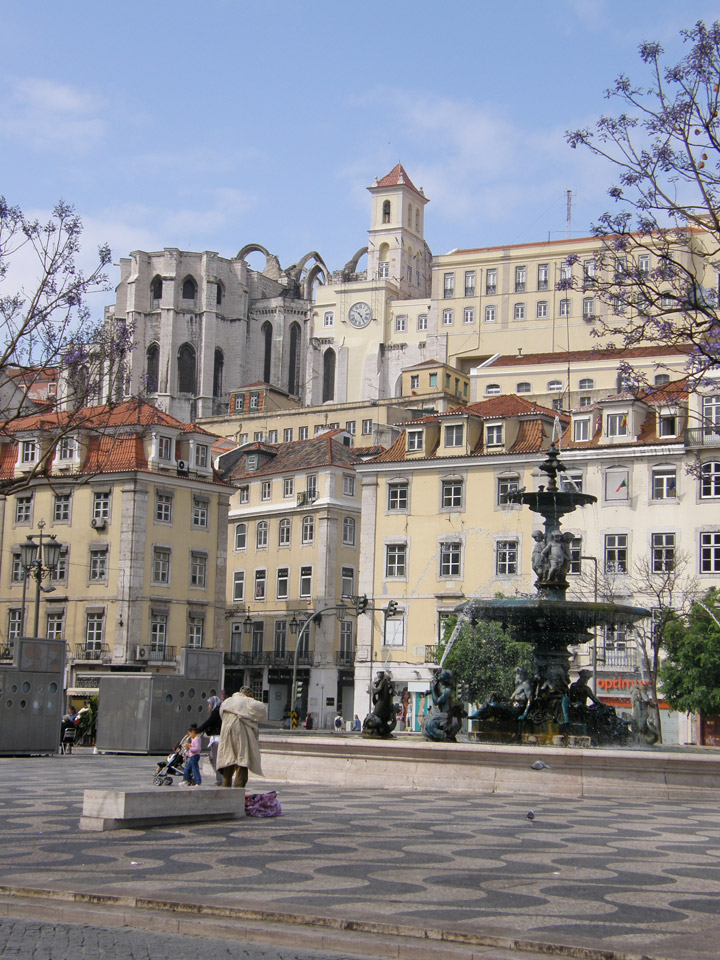 Carmo monastery on the upper left

From the Pombaline reconstruction dates the Bandeira Arch (Arco da Bandeira), a building at the south side of the square with a baroque pediment and a big arch that communicates the Rossio with the Sapateiros Street. The Rossio became linked to the other main square of the city, the Praça do Comércio, by two straight streets: the Áurea and the Augusta Streets. 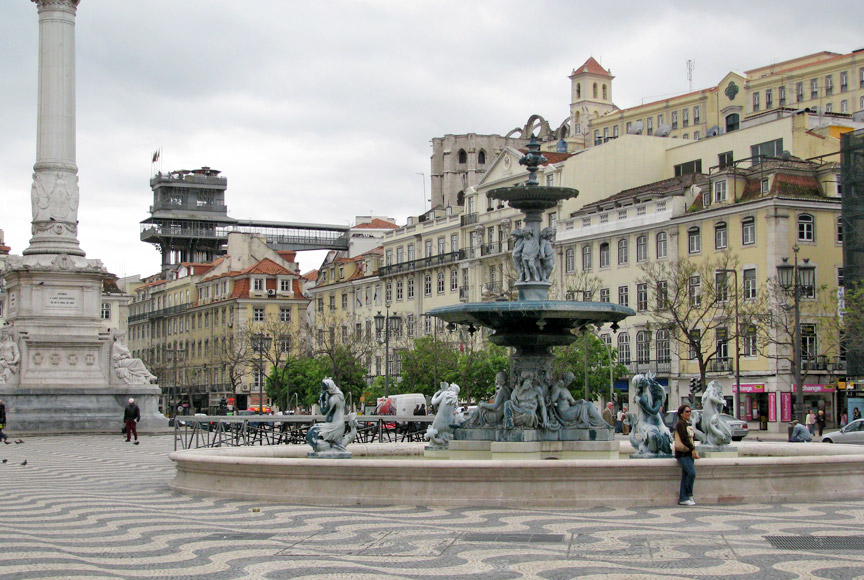 view of the Santa Justa lift

After a fire in 1836, the old Inquisition Palace was destroyed. Thanks to the efforts of writer Almeida Garrett, it was decided to build a theatre in its place. The Teatro Nacional D. Maria II, built in the 1840s, was designed by the Italian Fortunato Lodi in neoclassical style. A statue of the renaissance Portuguese playwriter Gil Vicente is located over the pediment of the theatre. Ironically, some of Gil Vicente's plays had been censured by the Inquisition back in the 16th century. 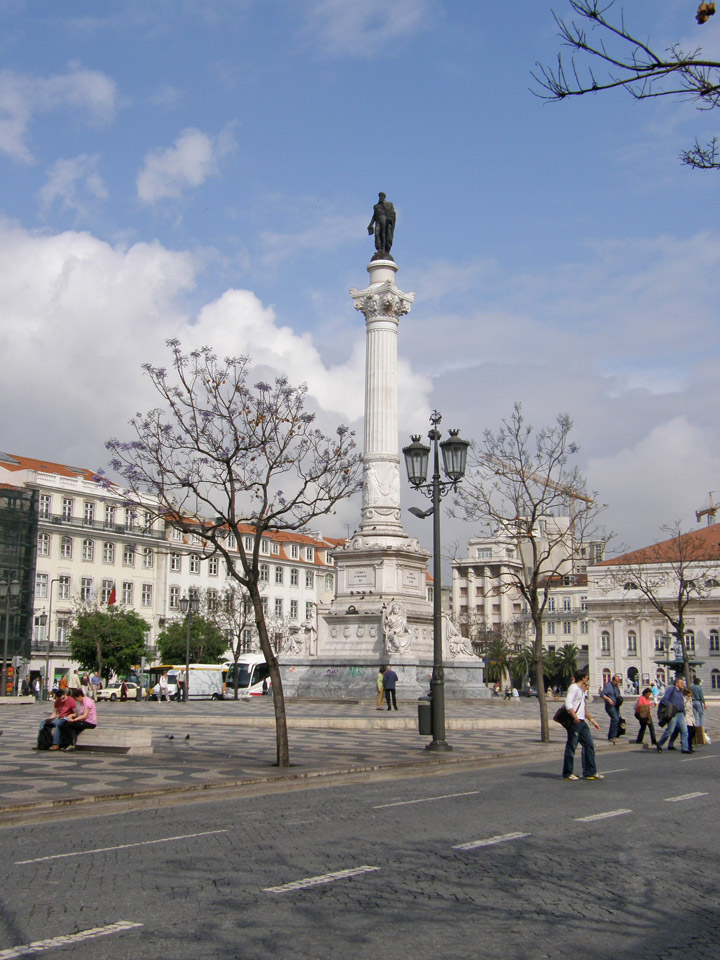 In the 19th century the Rossio was paved with typical Portuguese mosaic and was adorned with bronze fountains imported from France. The column with the statue of King Pedro IV was erected in 1874. At this time the square received its current official name, never accepted by the people. 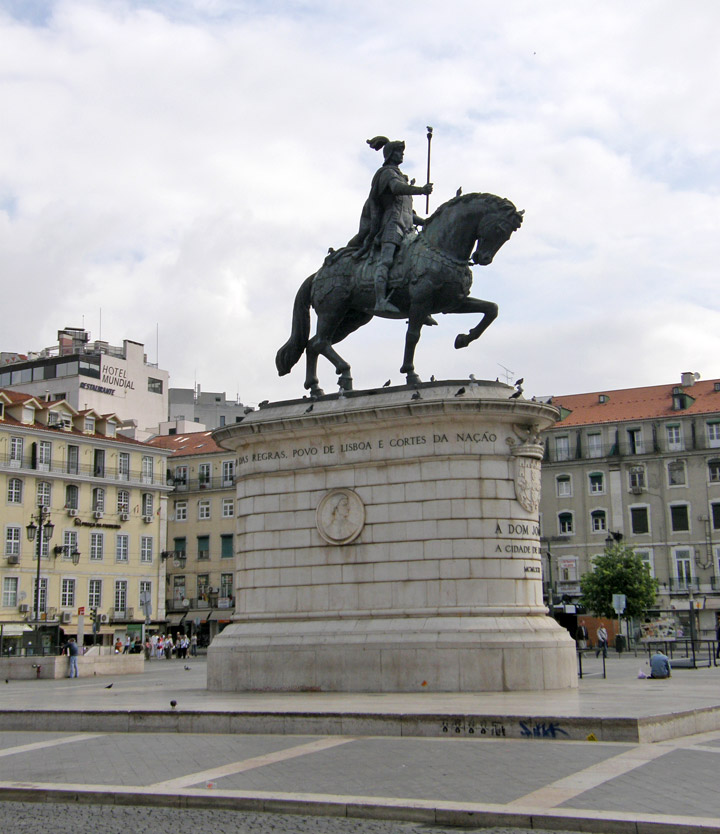 Between 1886 and 1887 another important landmark was built in the square: the Rossio Train Station (Estação de Caminhos de Ferro do Rossio). The Station was built by architect José Luís Monteiro and was an important addition to the infrastructure of the city. Its beautiful neo-manueline façade dominates the northwest side of the square. 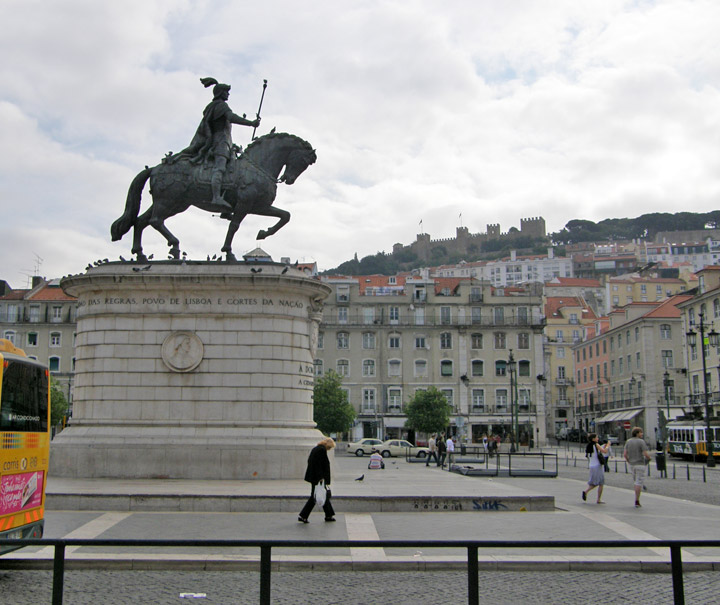 Riberia square with San Jorge castle above on the hill

The Rossio has been a meeting place for people of Lisbon for centuries. Some of the cafés and shops of the square date from the 18th century, like the Café Nicola, where poet Manuel Maria Barbosa du Bocage used to meet friends. Other traditional shops include the Pastelaria Suíça and the Ginginha, where the typical Lisbon spirit (ginginha) can be tasted. The building of the Maria II Theatre and the Public Gardens to the north of the square only made the area more attended by Lisbon high society in the 19th century. Nowadays it is constantly populated by Lisboners and tourists. 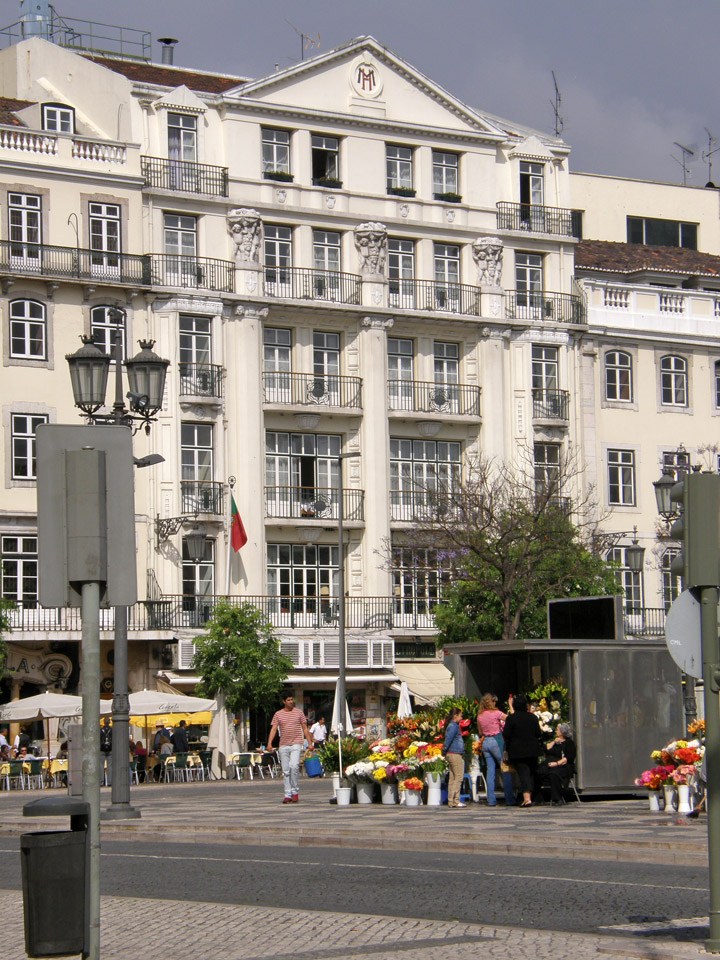 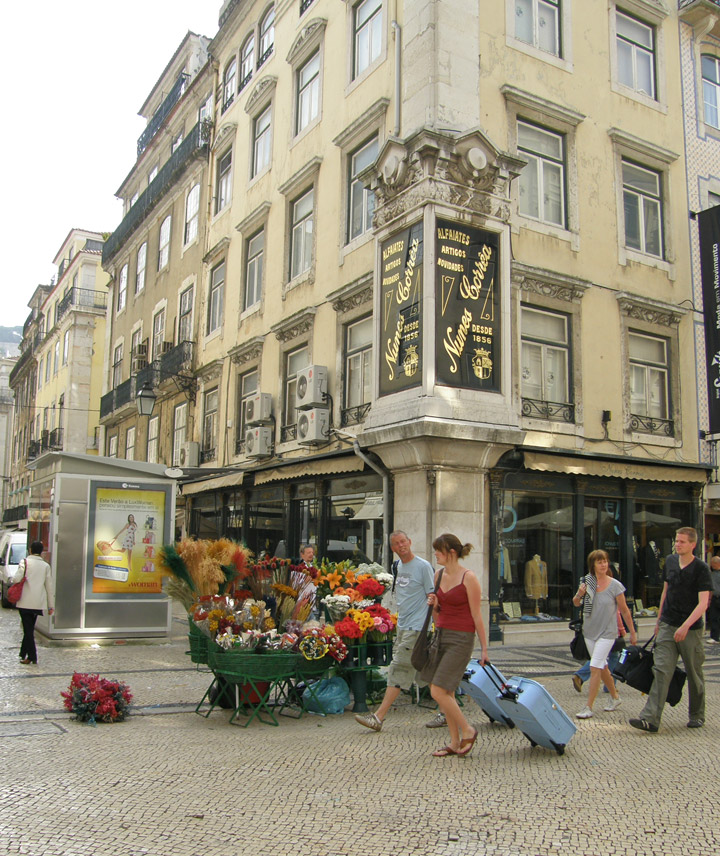