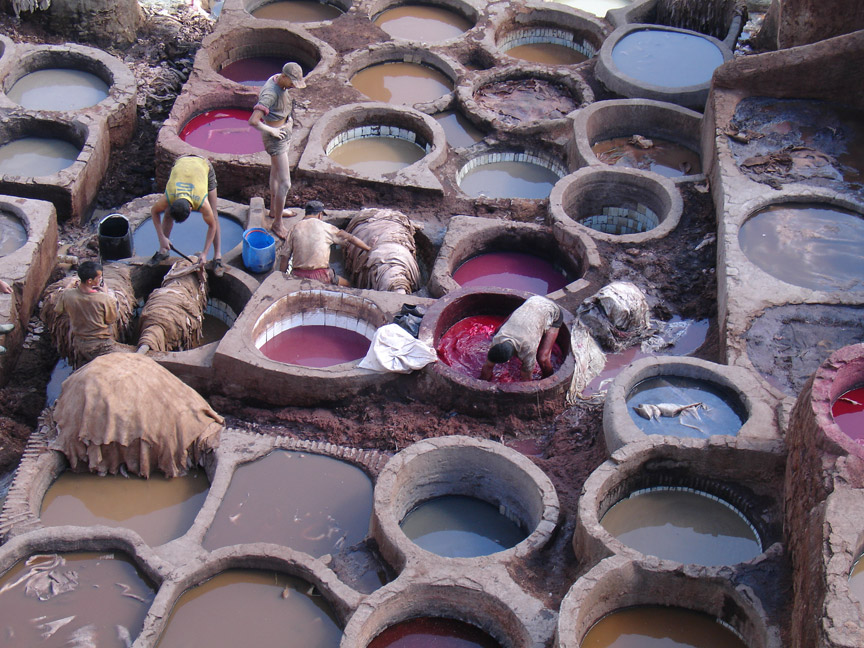 Tanning is the process of converting putrescible skin into non-putrescible leather, usually with tannin, an acidic chemical compound that prevents decomposition and often imparts color. 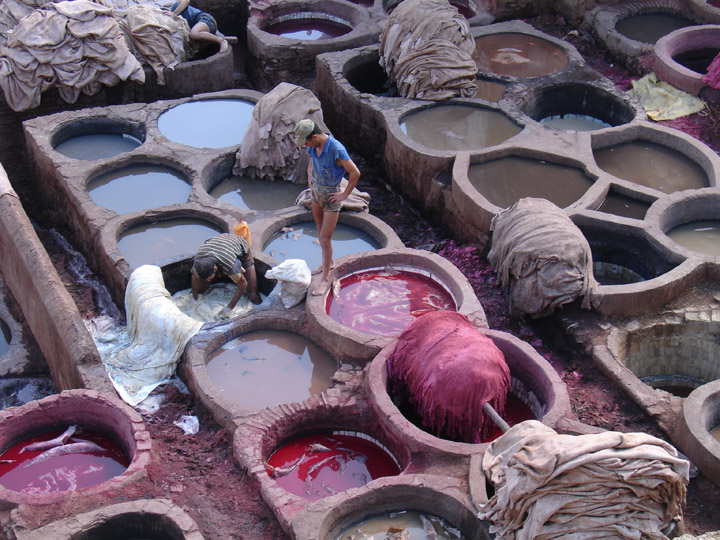 In ancient history, tanning was considered a noxious or "odiferous trade" and relegated to the outskirts of town, amongst the poor. Indeed, tanning by ancient methods is so foul smelling that tanneries are still isolated from those towns today where the old methods are used. The ancients used leather for waterskins, bags, harnesses, boats, armor, quivers, scabbards, boots and sandals. Around 2500 BC, the Sumerians began using leather, affixed by copper studs, on chariot wheels. 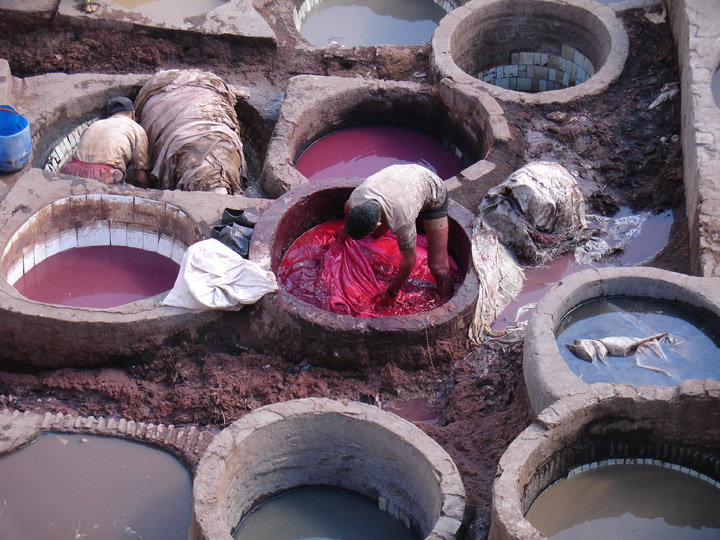 Skins typically arrived at the tannery dried stiff and dirty with soil and gore. First, the ancient tanners would soak the skins in water to clean and soften them. Then they would pound and scour the skin to remove any remaining flesh and fat. Next, the tanner needed to remove the hair fibers from the skin. This was done by either soaking the skin in urine, painting it with an alkaline lime mixture, or simply letting the skin putrefy for several months then dipping it in a salt solution. After the hair fibers were loosened, the tanners scraped them off with a knife. 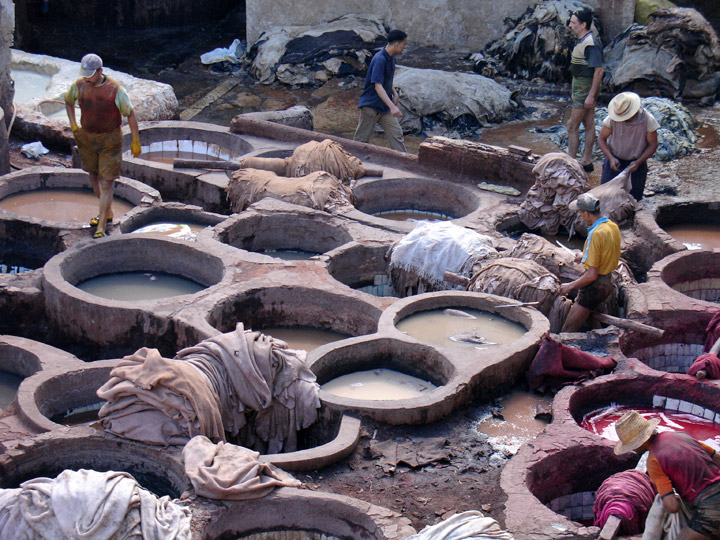 Once the hair was removed, the tanners would bate the material by pounding dung into the skin or soaking the skin in a solution of animal brains. Among the kinds of dung commonly used were that of dogs or pigeons. Sometimes the dung was mixed with water in a large vat, and the prepared skins were kneaded in the dung water until they became supple, but not too soft. The ancient tanner might use his bare feet to knead the skins in the dung water, and the kneading could last two or three hours. 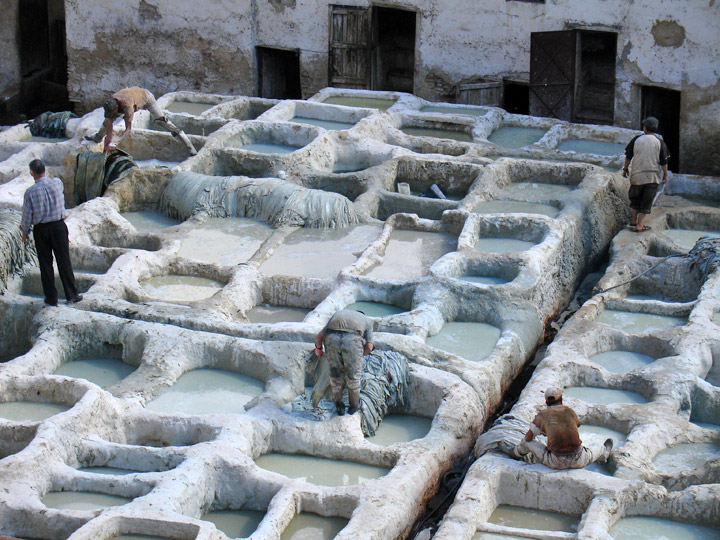 It was this combination of animal feces mixed with decaying flesh that made ancient tanneries so odiferous. 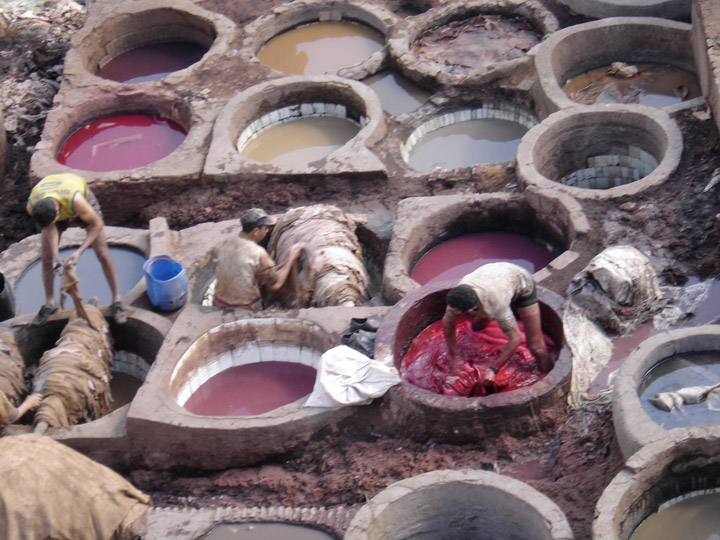 Children employed as dung gatherers were a common sight in ancient cities. Also common were "piss-pots" located on street corners, where human urine could be collected for use in tanneries or by washerwomen. In some variations of the process, cedar oil, alum or tannin were applied to the skin as a tanning agent. As the skin was stretched, it would lose moisture and absorb the agent. 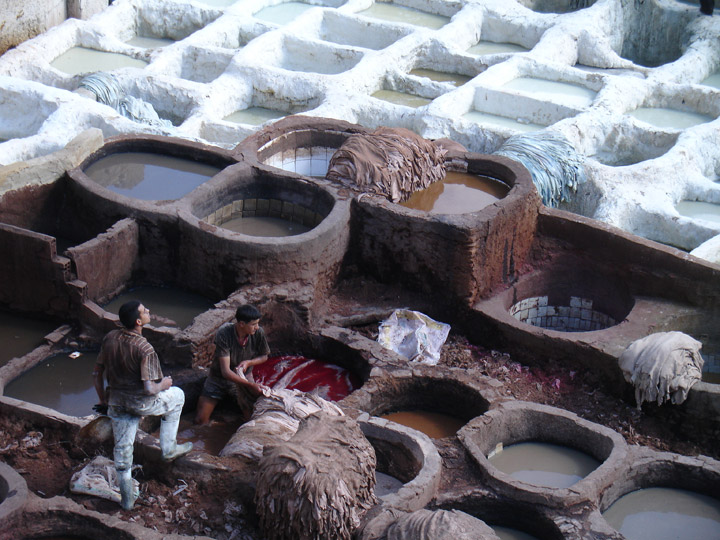 Leftover leather would be turned into glue. Tanners would place scraps of hides in a vat of water and let them deteriorate for months. The mixture would then be placed over a fire to boil off the water to produce hide glue. 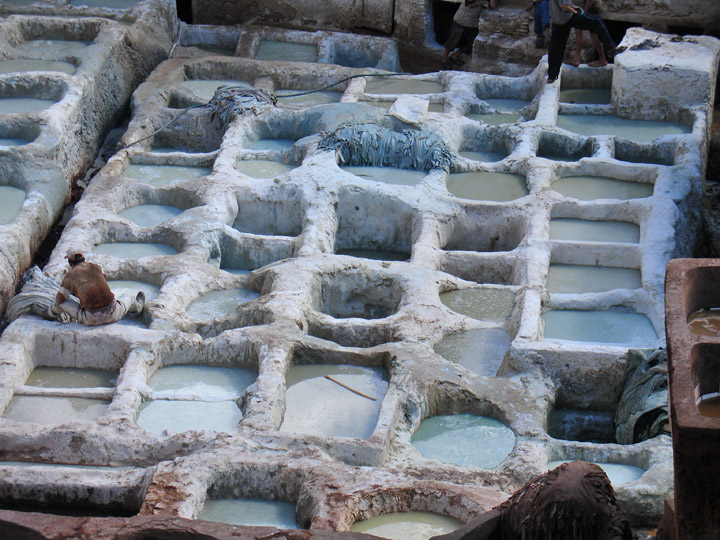 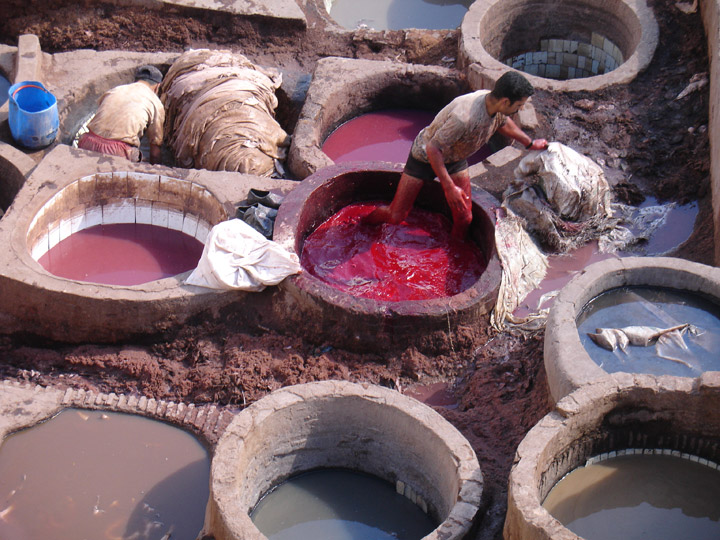 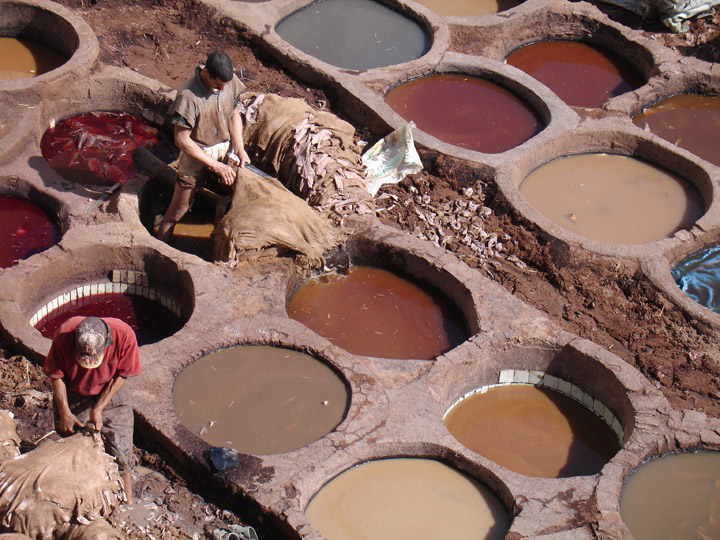 The first stage is the preparation for tanning. The second stage is the actual tanning and other chemical treatment. The third stage applies finishing to the surface. 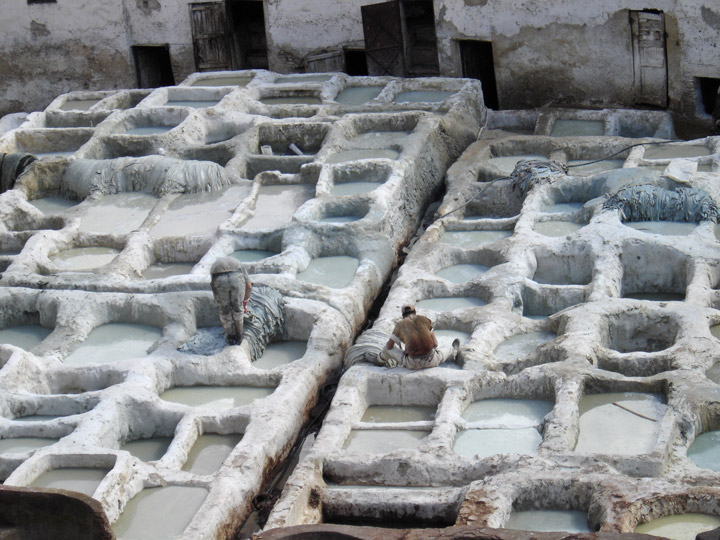 Preparing hides begins by curing them with salt. In wet-salting, the hides are heavily salted, then pressed into packs for about 30 days. In brine-curing the hides are agitated in a salt water bath for about 16 hours. The hides are then soaked in clean water to remove the salt and a lime/water solution to loosen the hair. The majority of hair is then removed using a machine with remaining hair being removed by hand using a dull knife, a process known as scudding. Depending on the end use of the leather, hides may be treated with enzymes to soften them. 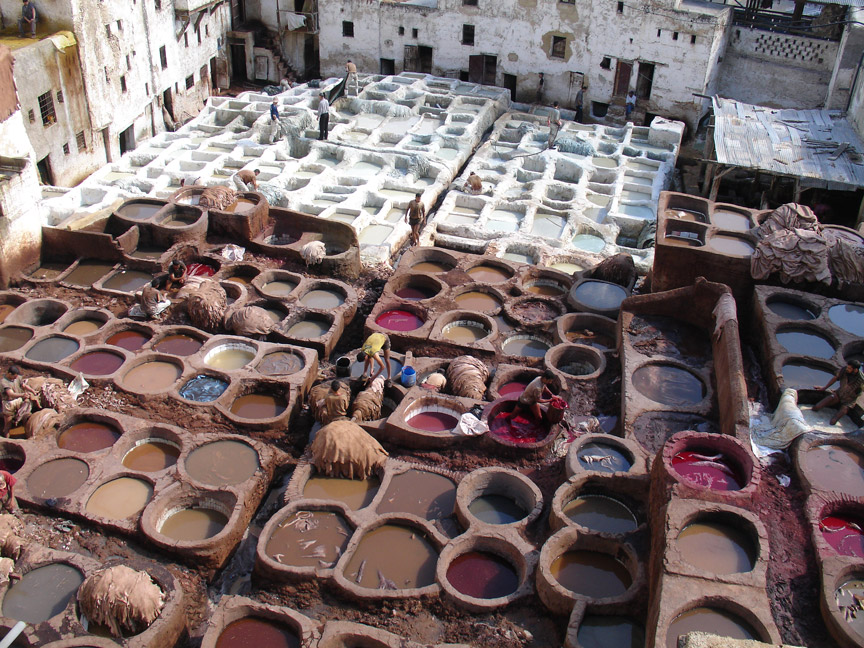 Tanning can be performed with either vegetable or mineral methods. Before tanning, the skins are unhaired, degreased, desalted and soaked in water over a period of 6 hours to 2 days. To prevent damage of the skin by bacterial growth during the soaking period, biocides, such as pentachlorophenol, are used. 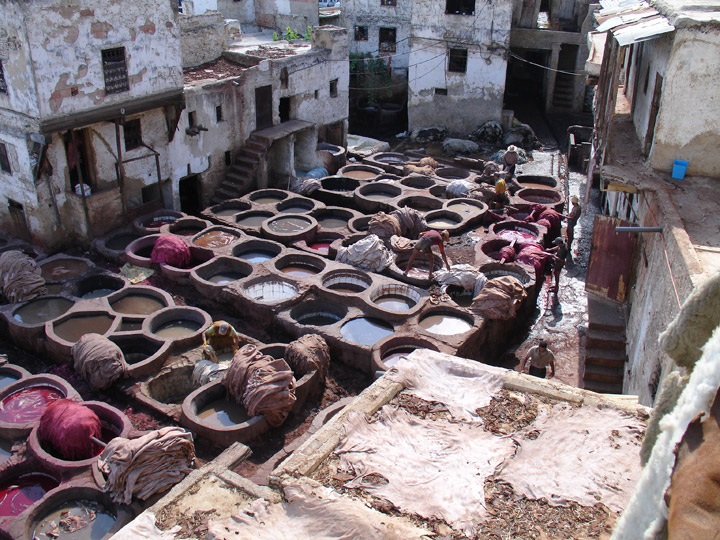 Vegetable tanning uses tannin, this is where the name tanning comes from. Tannin occurs naturally in bark. The primary barks used in modern times are chestnut, oak, tanoak, hemlock, quebracho, mangrove, wattle and myrobalan. Hides are stretched on frames and immersed for several weeks in vats of increasing concentrations of tannin. Vegetable tanned hide is flexible and is used for luggage and furniture. 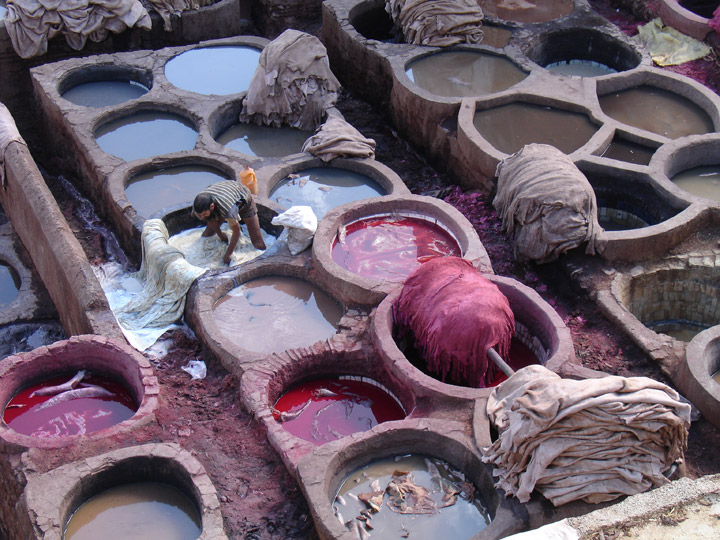 Mineral tanning usually uses chromium. In the raw state chrome tanned skins are blue and therefore referred to as "wet blue". Chrome tanning is faster than vegetable tanning (less than a day for this part of the process) and produces a stretchable leather which is excellent for use in handbags and garments. 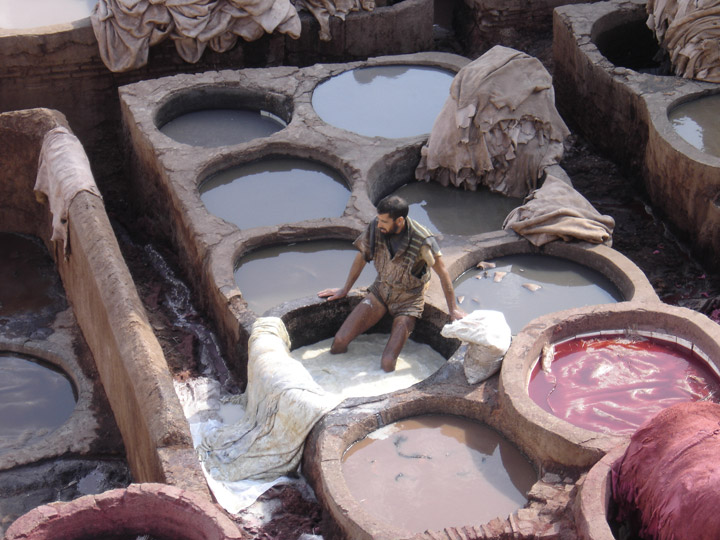 Depending on the finish desired, the hide may be waxed, rolled, lubricated, injected with oil, split, shaved and, of course, dyed. Suedes, nubucks, etc. are finished by raising the nap of the leather by rolling with a rough surface. 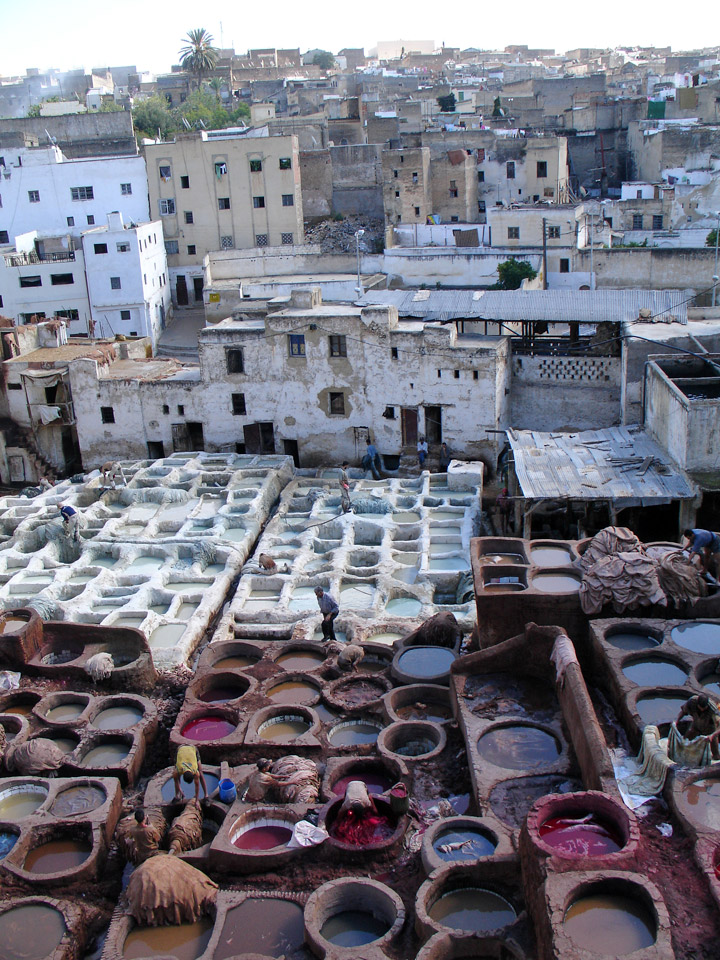 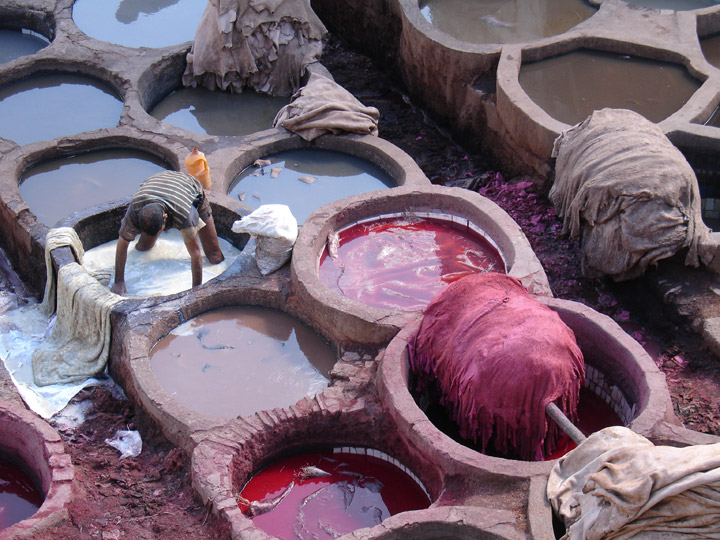 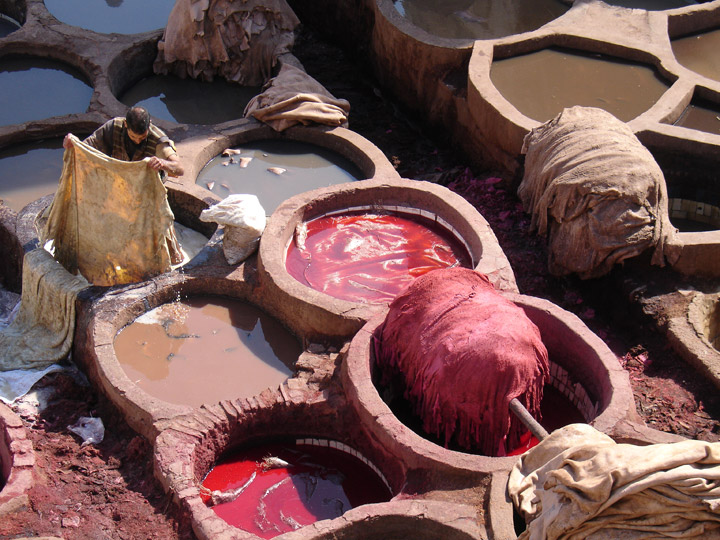 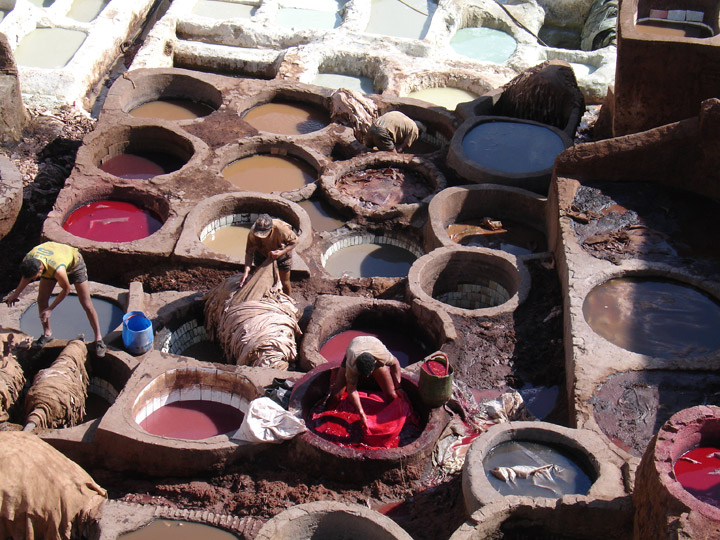 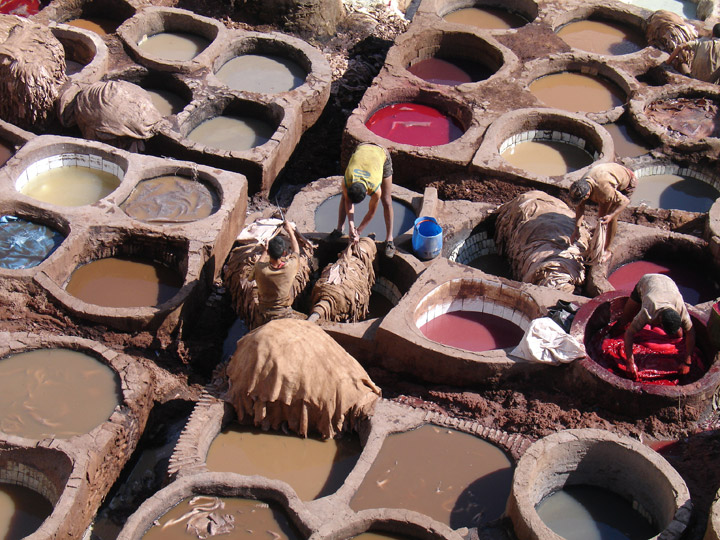 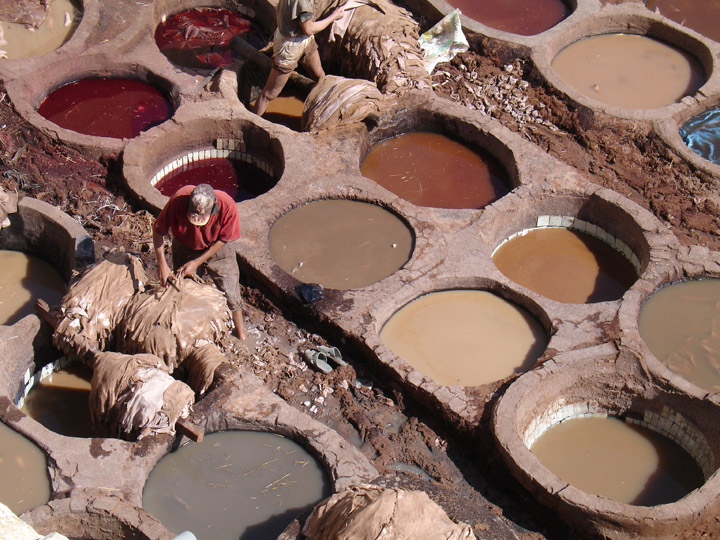 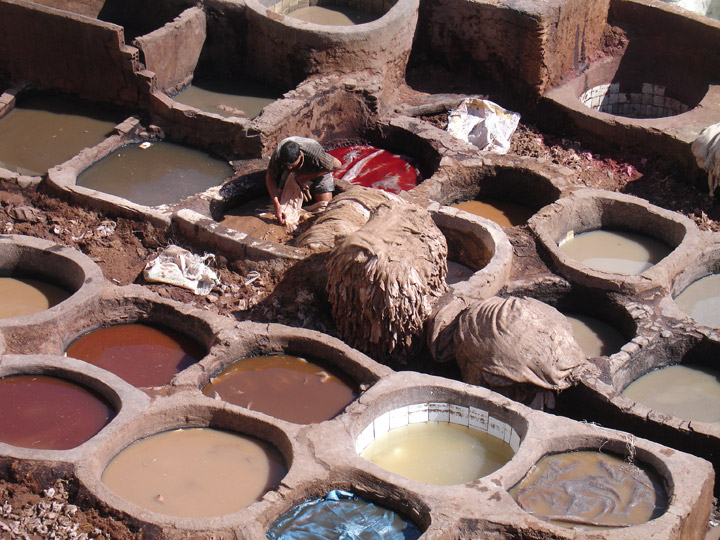 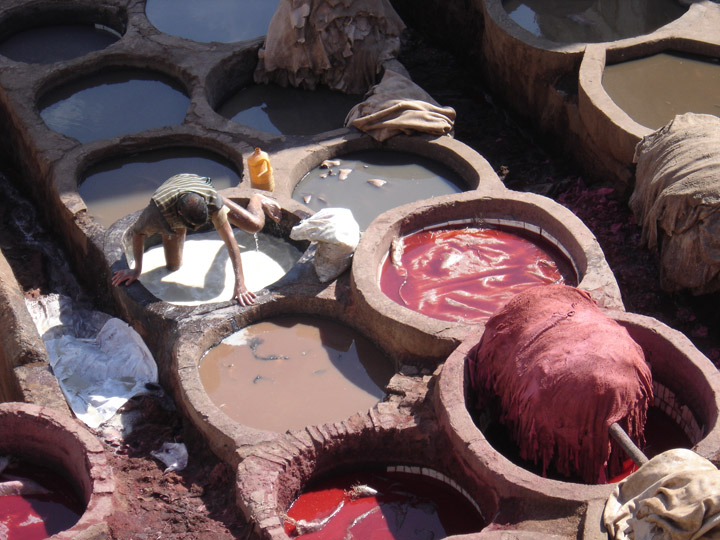 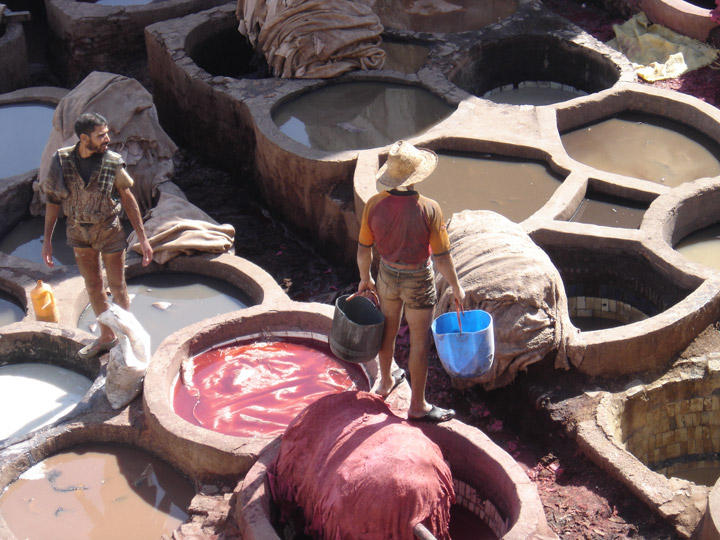 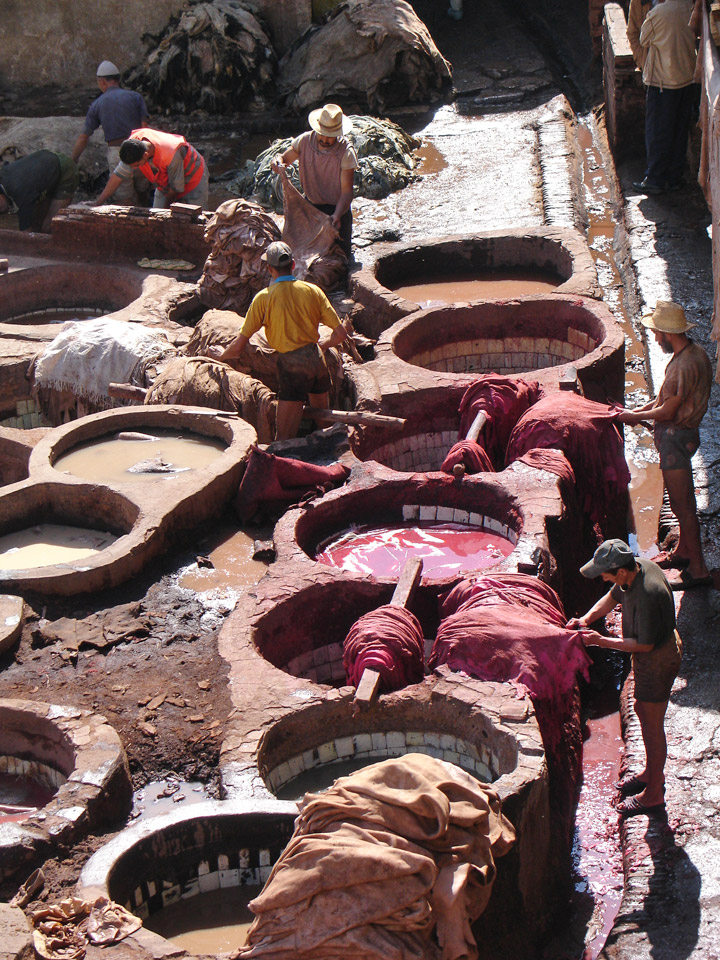 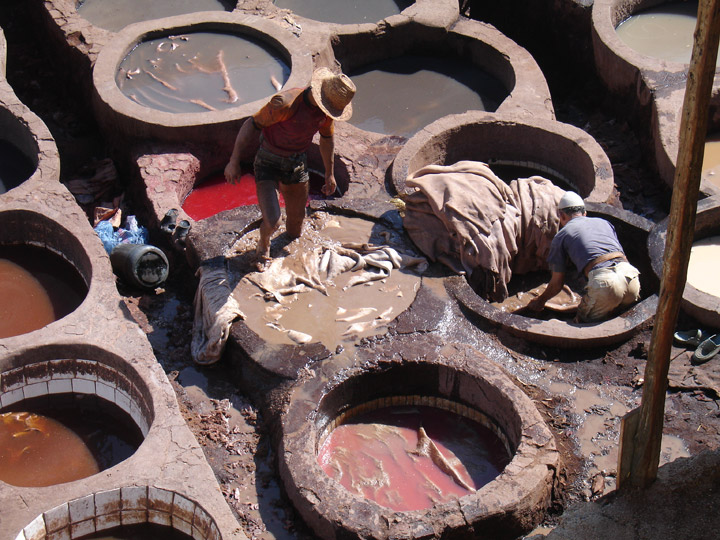 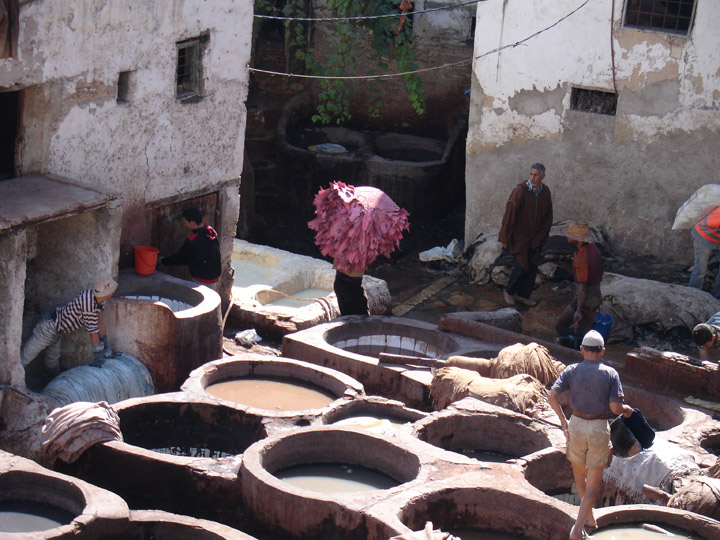 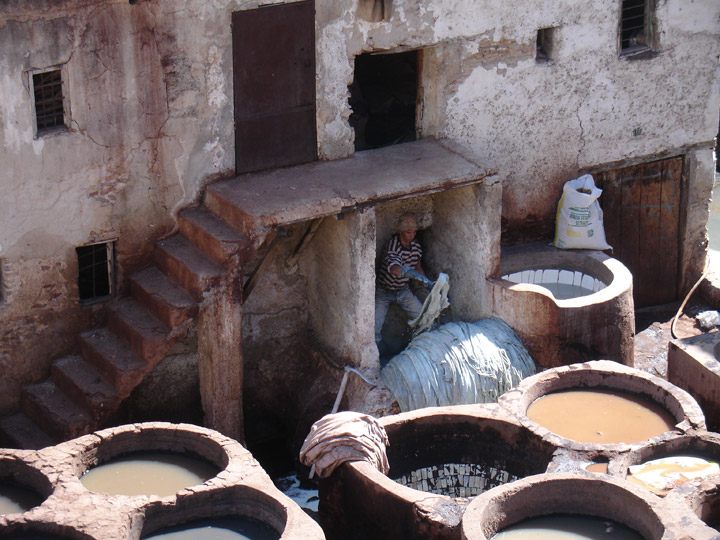 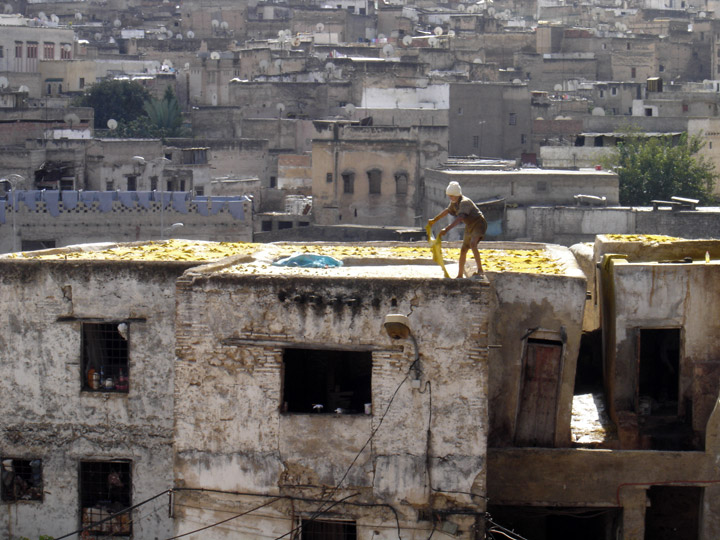 laying out the yellow tanned skins 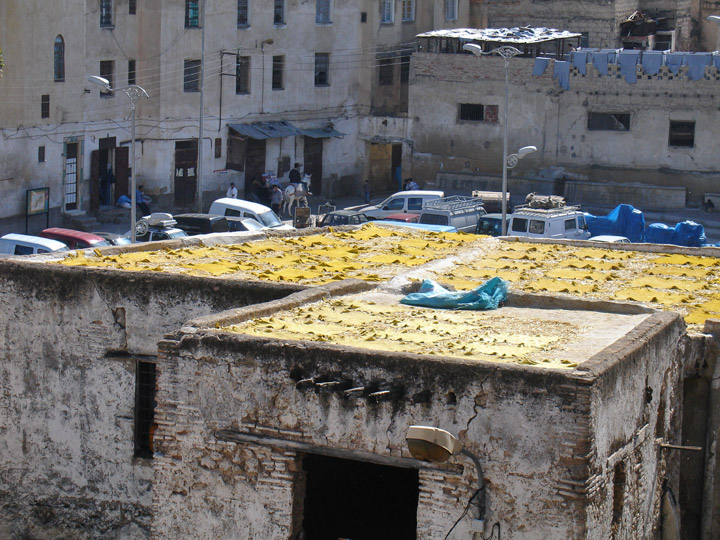 which have the most value