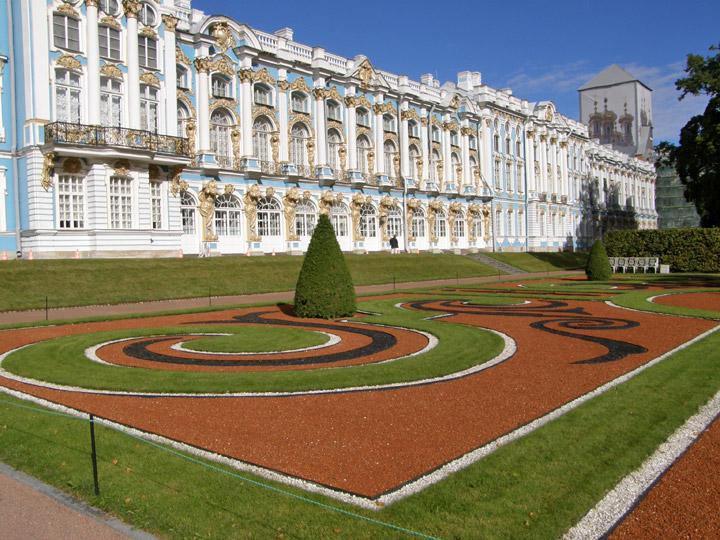 The Catherine Palace (Russian: Екатерининский дворец) is the Rococo summer residence of the Russian tsars, located in the town of Tsarskoye Selo (Pushkin), 25 km south-east of St. Petersburg, Russia. 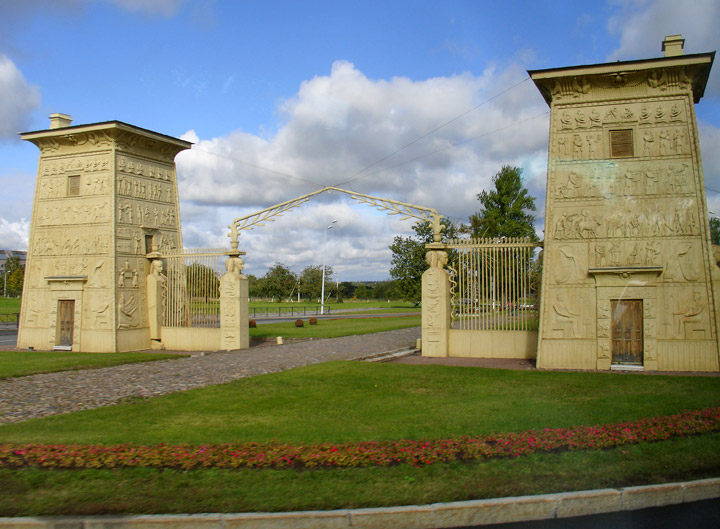 pillars at the entrance to the Palace grounds

The residence originated in 1717, when Catherine I of Russia engaged the German architect Johann-Friedrich Braunstein to construct a summer palace for her pleasure. In 1743, Empress Anna commissioned Mikhail Zemtsov and Andrei Kvasov to expand the Catherine Palace. Empress Elizabeth, however, found her mother's residence outdated and incommodious and in May 1756 asked her court architect Bartolomeo Rastrelli to demolish the old structure and replace it with a much grander edifice in a flamboyant Rococo style. Construction lasted for four years and on 30 July 1756 the architect presented the brand-new 325-metre-long palace to the Empress, her dazed courtiers and stupefied foreign ambassadors. 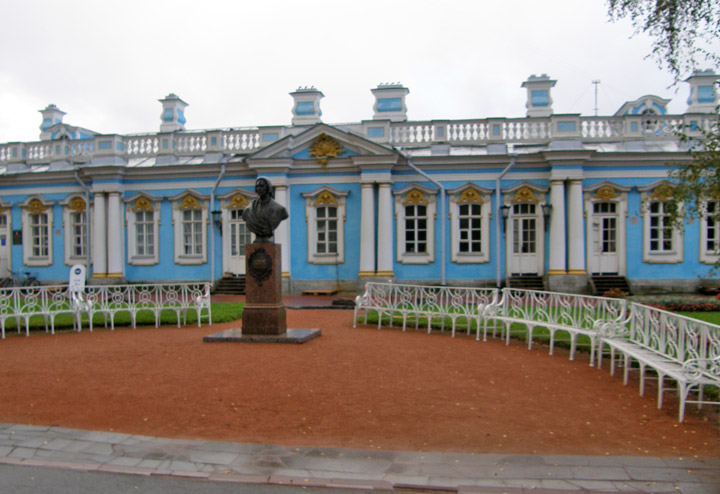 During Elizabeth's lifetime, the palace was famed for its obscenely lavish exterior. More than 100 kilograms of gold were used to gild the sophisticated stucco façade and numerous statues erected on the roof. It was even rumoured that the palace's roof was constructed entirely of gold. In front of the palace a great formal garden was laid out. It centres on the azure-and-white Hermitage Pavilion near the lake, designed by Zemtsov in 1744, overhauled by Rastrelli in 1749 and formerly crowned by a grand gilded sculpture representing The Rape of Persephone. The interior of the pavilion featured dining tables with dumbwaiter mechanisms. The grand entrance to the palace is flanked by two massive "circumferences", also in the Rococo style. A delicate iron-cast grille separates the complex from the town of Tsarskoe Selo. 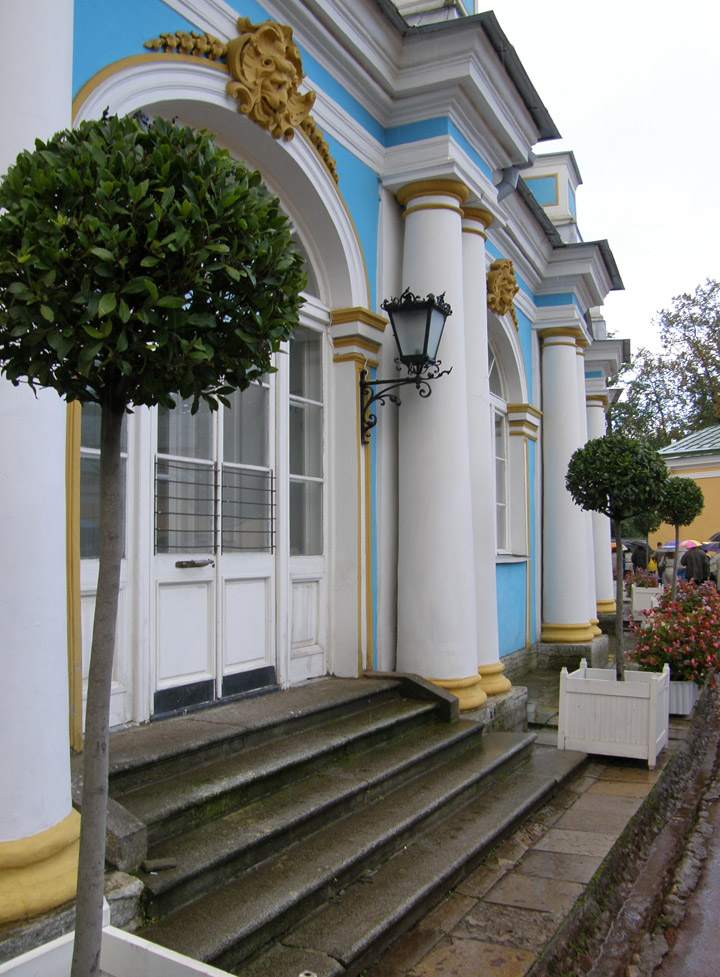 Although the palace is popularly associated with Catherine the Great, she actually regarded its "whipped cream" architecture as old-fashioned. When she ascended the throne, a number of statues in the park were being covered with gold, in accordance with the last wish of Empress Elizabeth, yet the new monarch had all the works suspended upon being informed about the expense. In her memoirs she censured the reckless extravagance of her predecessor: "The palace was then being built, but it was the work of Penelope: what was done today, was destroyed tomorrow. That house has been pulled down six times to the foundation, then built up again ere it was brought to its present state. The sum of a million six hundred thousand rubles was spent on the construction. Accounts exist to prove it; but besides this sum the Empress spent much money out of her own pocket on it, without ever counting". 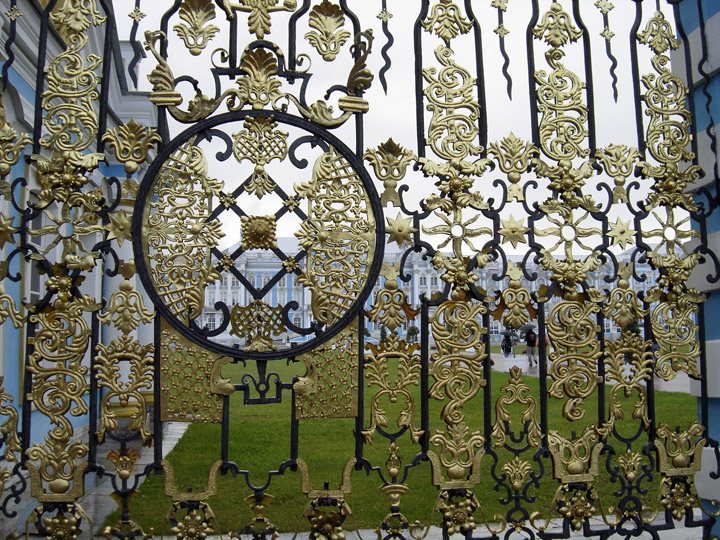 In order to gratify her passion for antique and Neoclassical art, Catherine employed the Scottish architect Charles Cameron who not only refurbished the interior of one wing in the Neo-Palladian style then in vogue, but also constructed the personal apartments of the Empress, a rather modest Greek Revival structure known as the Agate Rooms and situated to the left from the grand palace. Noted for their elaborate jasper decor, the rooms were designed so as to be connected to the Hanging Gardens, the Cold Baths, and the Cameron Gallery (still housing a collection of bronze statuary) - three Neoclassical edifices constructed to Cameron's designs. According to Catherine's wishes, many remarkable structures were erected for her amusement in the Catherine Park. These include the Dutch Admiralty, Creaking Pagoda, Chesme Column, Rumyantsev Obelisk, and Marble Bridge. 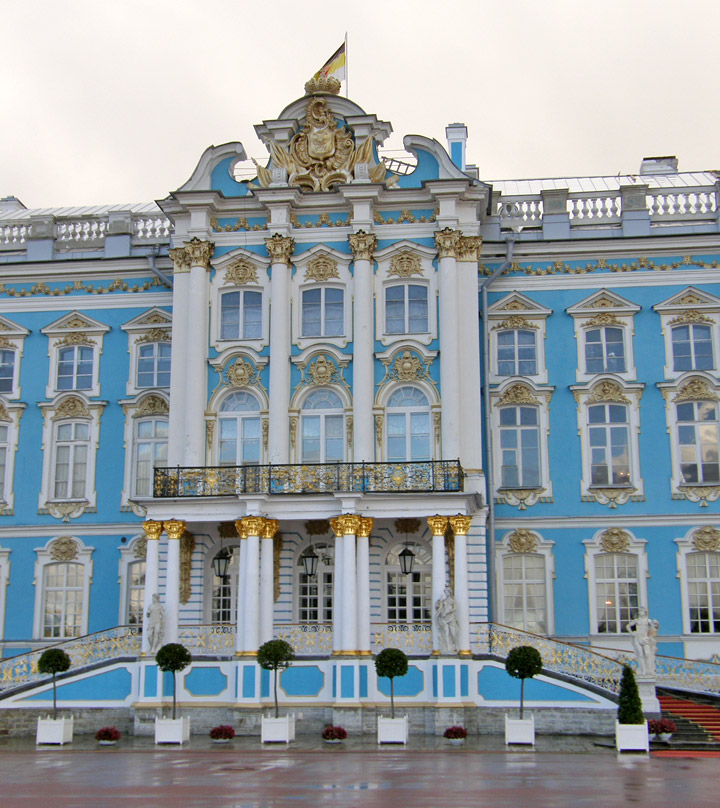 Upon Catherine's death in 1796, the palace was abandoned in favour of the Pavlovsk Palace. Subsequent monarchs preferred to reside in the nearby Alexander Palace and, with only two exceptions, refrained from making new additions to the Catherine Palace, regarding it as a splendid monument to Elizabeth's wealth and Catherine II's glory. In 1817, Alexander I engaged Vasily Stasov to refurbish some interiors of his grandmother's residence in the Empire style. Twenty years later, the magnificent Stasov Staircase was constructed to replace the old circular staircase leading to the Palace Chapel. Unfortunately, most of Stasov's interiors - specifically those dating from the reign of Nicholas I - have not been restored after the WWII ravages to this day. 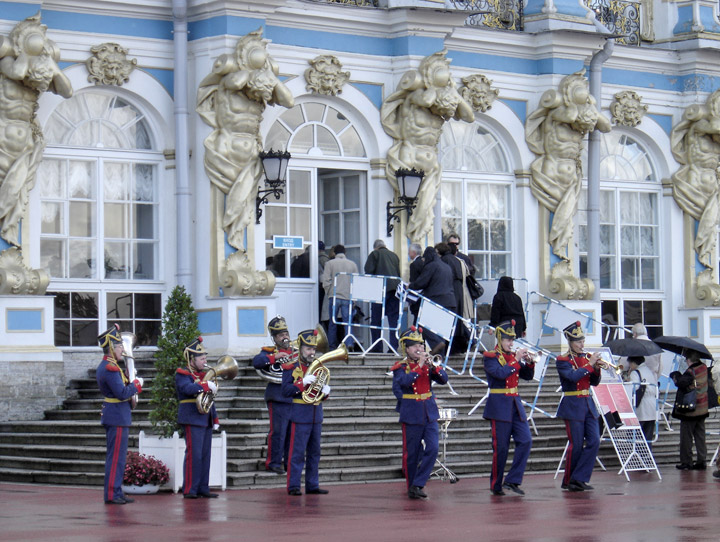 band playing as the tourists enter 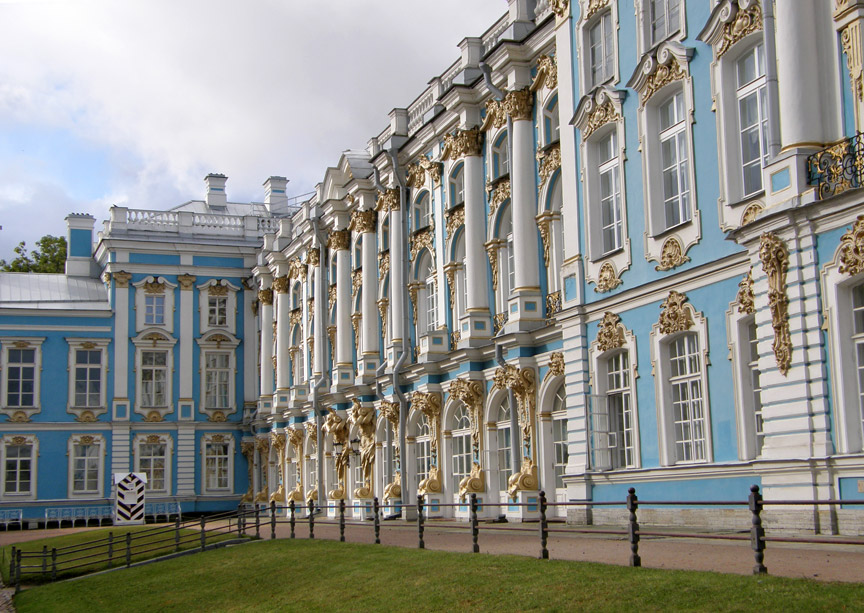 In Twentieth Century Fox's 1997 animated feature, "Anastasia", the Catherine Palace is depicted (inaccurately) as the home of the imperial family. 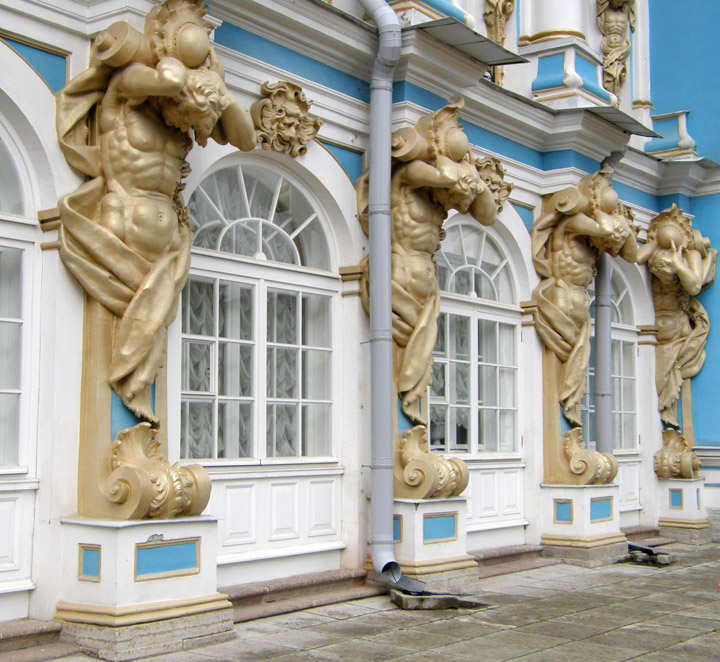 Although Stasov's and Cameron's Neoclassical interiors are superb manifestations of the late 18th-century and early 19th-century taste, the palace is best known for Rastrelli's grand suit of formal rooms known as the Golden Enfilade. It starts at the spacious airy ballroom, the "Grand Hall" or the "Hall of Lights", with a spectacular painted ceiling, and comprises numerous distinctively decorated smaller rooms, including the reproduced Amber Room. 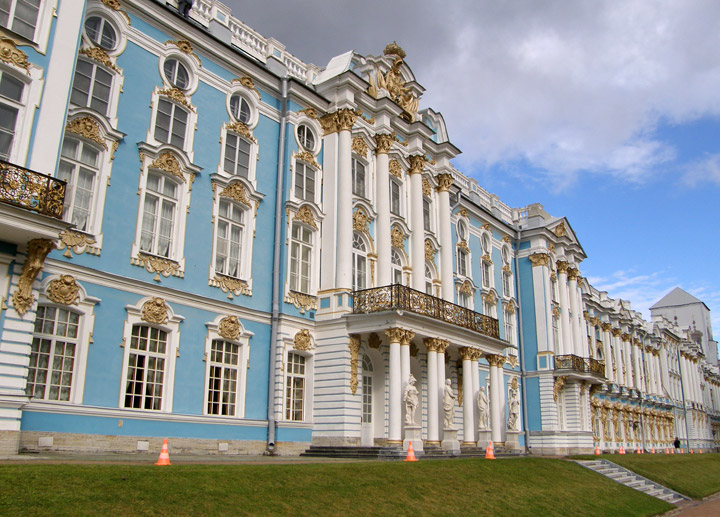 The Great Hall, or the Light Gallery as it was called in the 18th century, is a formal apartment in the Russian baroque style designed by Bartolomeo Rastrelli between 1752 and 1756. The Great Hall was intended for more important receptions such as balls, formal dinners, and masquerades. The hall was painted in two colors and covers an area of approxiametly 1,000 square meters. Occupying the entire width of the palace, the windows on the eastern side look out onto the park while the windows of the western side look out to the palace plaza. In the evening, 696 lamps are lit on 12-15 chandeliers located near the mirrors. The halls sculptural and gilded carvings and ornimantation were created according to sketches by Rastrelli and models by Johann Franz Dunker. 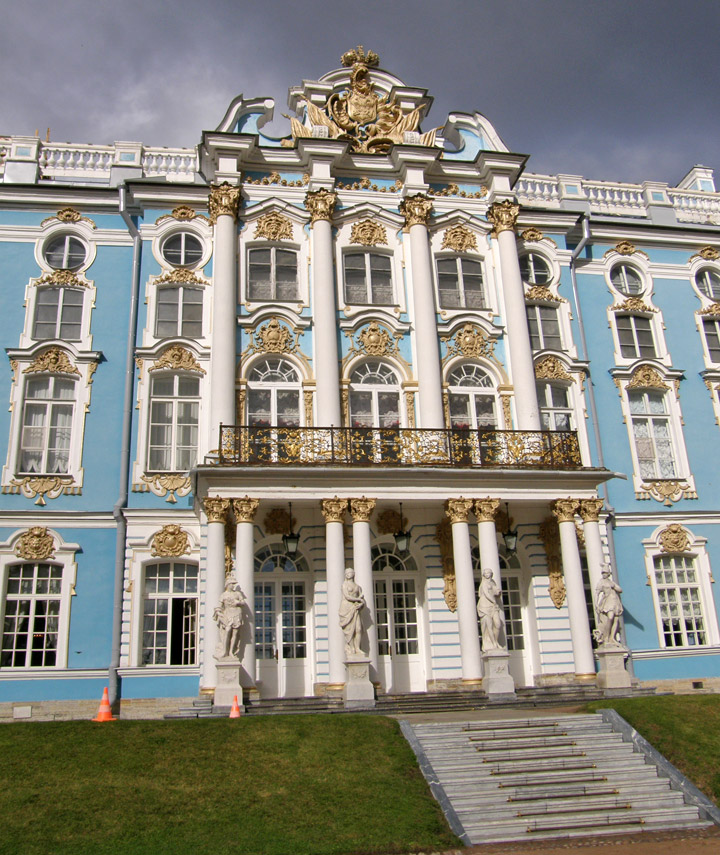 Beyond the Great Hall is the dining room for the courtiers in attendance (the Courtiers-in-Attendance Dining Room). The room was designed by Rastrelli in the mid-18th century. The small room is lit by four windows which look out into the formal courtyard. The architect placed false windows with mirrors and mirrored glass on the opposite wall, making the hall more spacious and bright. Decorated in the typical baroque interior style, the hall is filled with gilded wall-carvings, complex gilded pieces on the doors, and ornamental patterns of stylized flowers. The ceiling mural was painted by a well known student of the Russian School from the mid-18th century. It is based on the Greek myth of the sun god Helios and the goddess of the dawn, Eos.Eos. 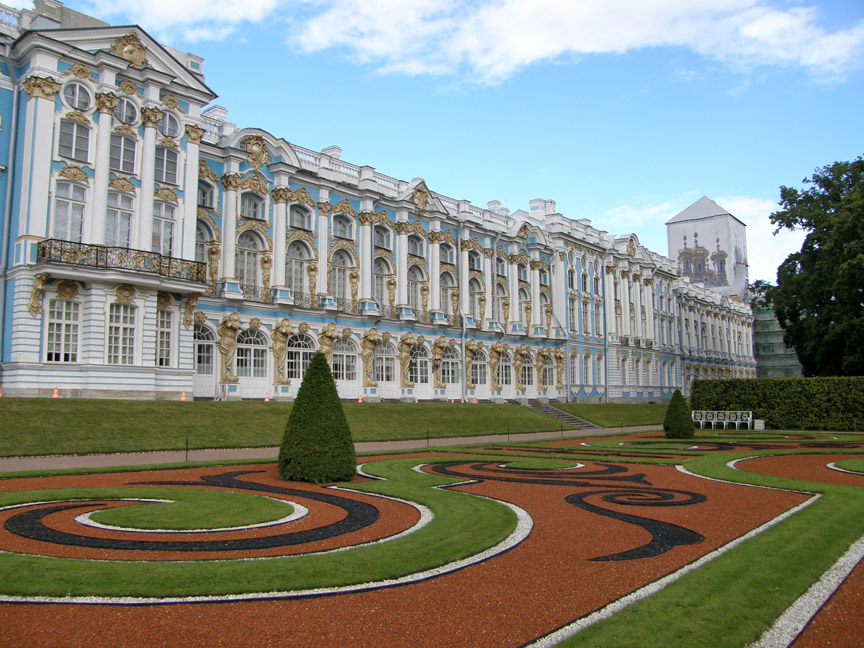 Across from the Courtiers-in-Attendance Dining Room, on the other side of the Main Staircase, is the White Formal Dining Room. The hall was used for the empresses' formal dinners or "evening meals". The walls of the dining hall were decorated with the utmost extravagance with gilded carvings. The furnishings consist of gilded carvings on the consoles. The painted mural, The Triumph of Apollo is a copy of a painting completed in the 16th century by Italian artist, Guido Reni.eni. 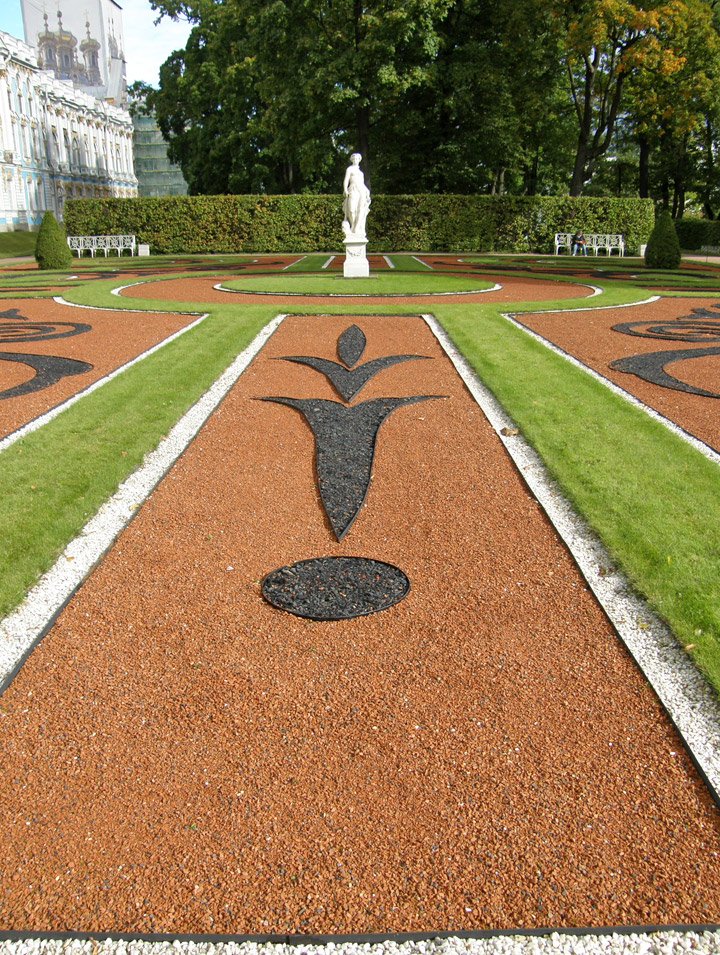 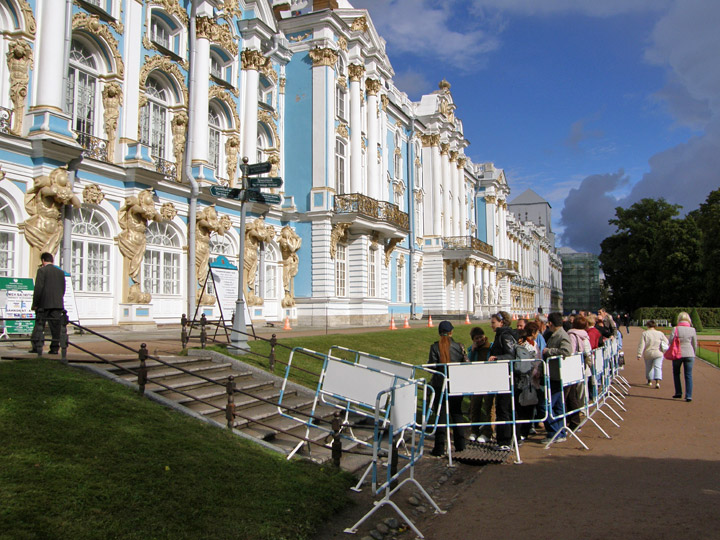 The Green Dining Room, which replaced Rastrelli's "Hanging Garden" in 1773, is the first of the rooms in the northern wing of the Catherine Palace, designed by Cameron for the future Emperor Paul and his wife. The pistachio-coloured walls of the room are lined with stucco figures by Ivan Martos. During the great fire of 1820 the room was seriously damaged, thus sharing the fate of other Cameron's interiors. It was subsequently restored under Stasov's direction. 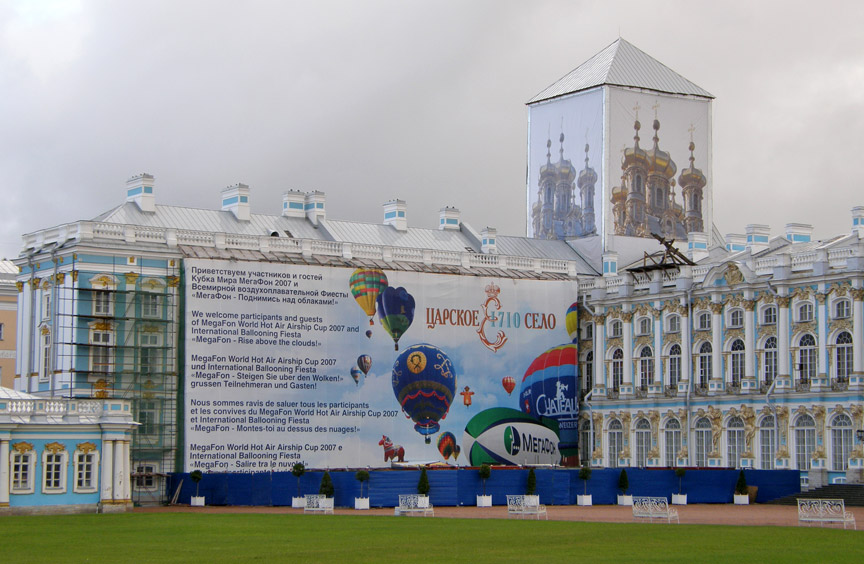 Other Cameron's interiors include the Waiters' Room, with the inlaid floor of rosewood, amaranth and mahogany and stylish Chippendale card-tables; the Blue Formal Dining-Room, with white-and-blue silk wallpapers and Carrara marble chimneys; the Chinese Blue Drawing Room, a curious combination of Adam style with the Chinoiserie; the Choir Anteroom, with walls lined in apricot-colored silk; and the columned boudoir of Alexander I, executed in the Pompeian style. 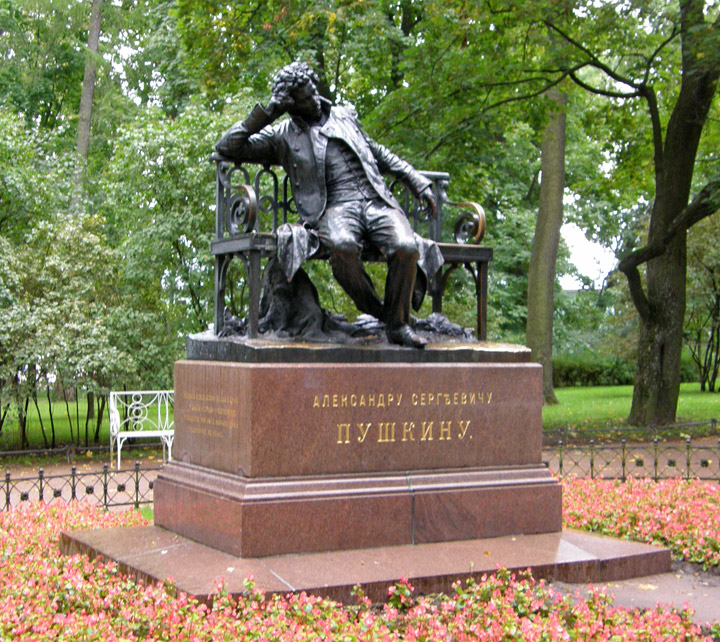