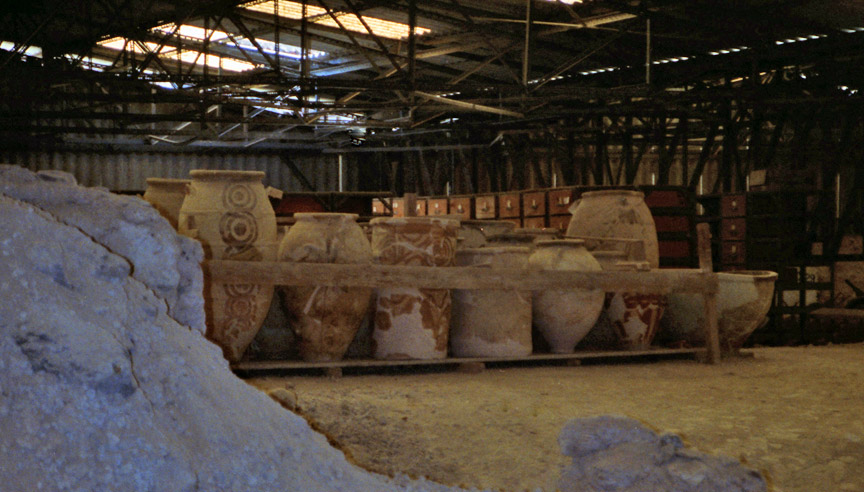 Excavations starting in 1967 at the site called Akrotiri under the late Professor Spyridon Marinatos have made Thera the best-known "Minoan" site outside of Crete, the homeland of the culture. The island was not known as Thera at this time. Only the southern tip of a large town has been uncovered, yet it has revealed complexes of multi-level buildings, streets, and squares with remains of walls standing as high as eight meters, all entombed in the solidified ash of the famous eruption of Thera. The site was not a palace-complex such as are found in Crete, but its excellent masonry and fine wall-paintings show that this was certainly no conglomeration of merchants' warehousing either. A loom-workshop suggests organized textile weaving for export. This Bronze Age civilization thrived between 3000 to 2000 BC, and reached its peak in the period 2000 to 1580 BC 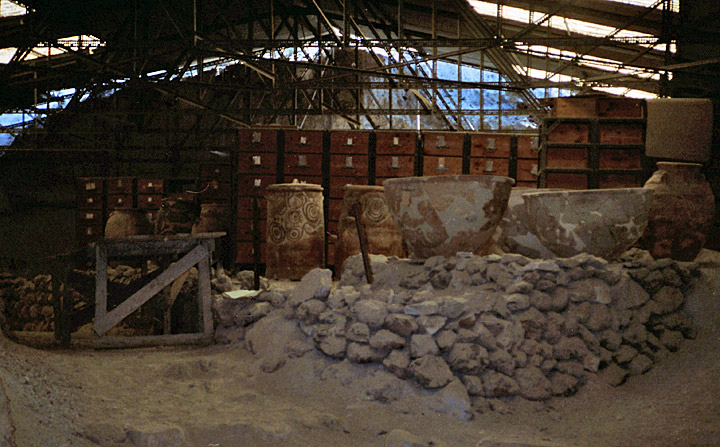 Akrotiri, like Pompeii, a flourishing and prosperous Minoan town was covered beneath a thick layer of pumice and ash created by the terrific volcanic eruption of 1500 BC. 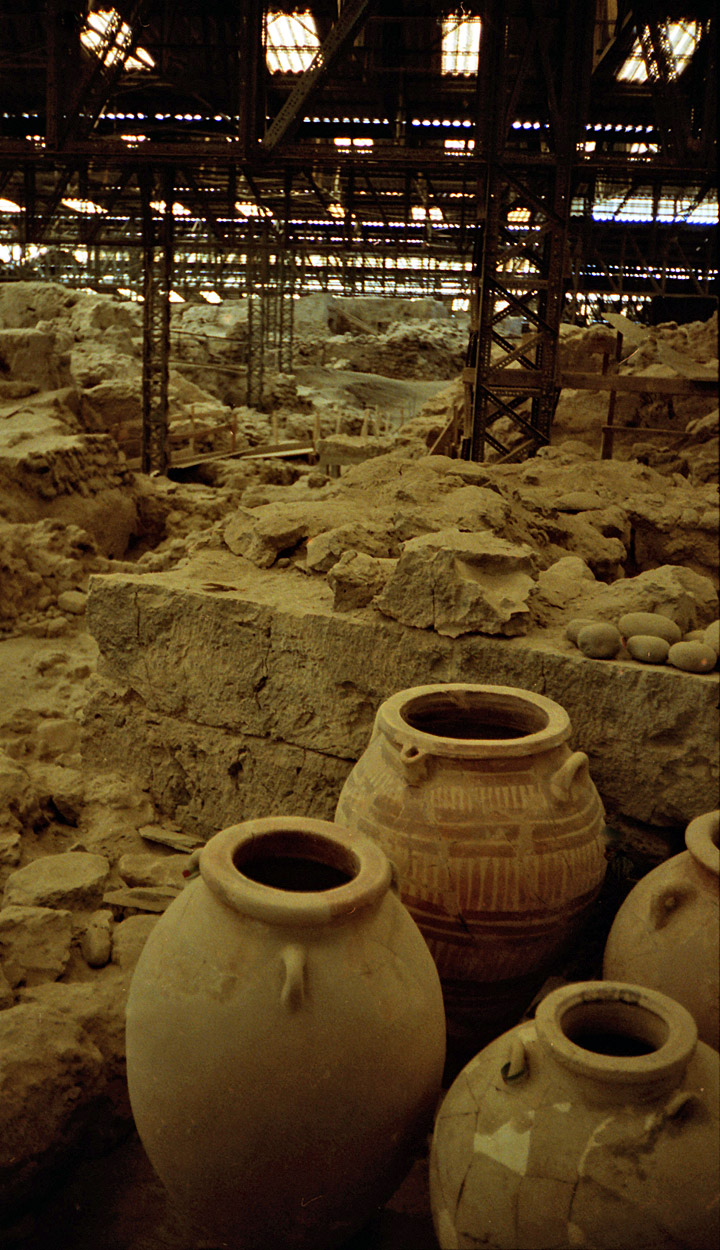 Some of the houses in Akrotiri are major structures, some amongst them three stories high. Its streets, squares, and walls were preserved in the layers of ejecta, sometimes as tall as eight meters, and indicating this was a major town. In many houses stone staircases are still intact, and they contain huge ceramic storage jars (pithoi), mills, and pottery. Noted archaeological remains found in Akrotiri are wall paintings or frescoes, which have kept their original color well, as they were preserved under many meters of volcanic ash. The town also had a highly developed drainage system and, judging from the fine artwork, its citizens were clearly sophisticated and relatively wealthy people. 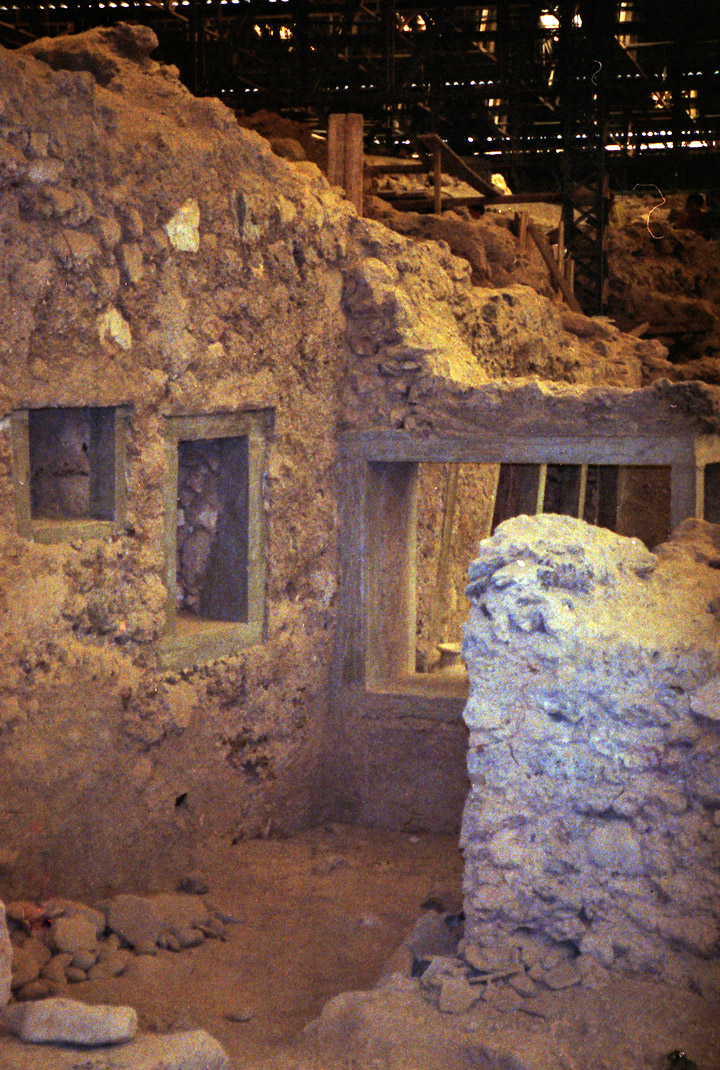 Pipes with running water and water closets found at Akrotiri are the oldest such utilities discovered. The pipes run in twin systems, indicating that the Therans used both hot and cold water supplies; the origin of the hot water probably was geothermic, given the volcano's proximity. The dual pipe system suggesting hot and cold running water, the advanced architecture, and the apparent layout of the Akrotiri find resemble Plato's description of the legendary lost city of Atlantis, further indicating the Minoans as the culture which primarily inspired the Atlantis legend. 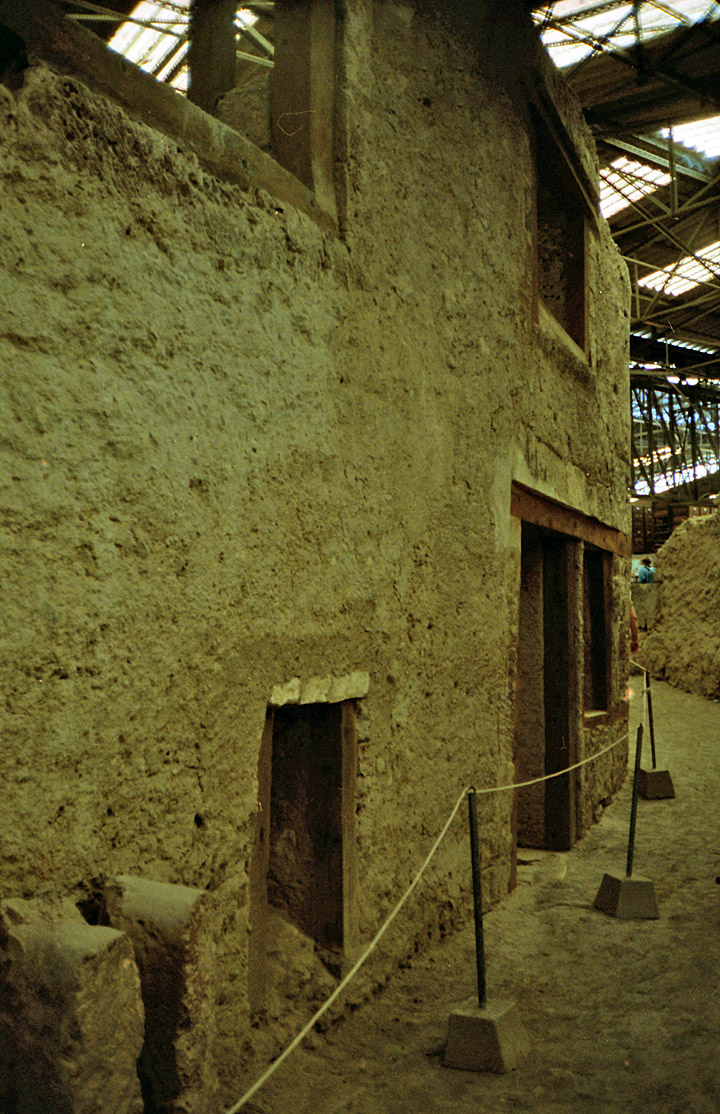 Fragmentary wall-paintings at Akrotiri lack the insistent religious or mythological content familiar in Classical Greek decor. Instead, the Minoan frescoes depict "Saffron-Gatherers", who offer their crocus-stamens to a seated lady, perhaps a goddess; in another house are two antelopes, painted with a kind of confident, flowing, decorative, calligraphic line, the famous fresco of a fisherman with his double strings of fish strung by their gills, and the flotilla of pleasure boats, accompanied by leaping dolphins, where ladies take their ease in the shade of light canopies, among other frescoes. 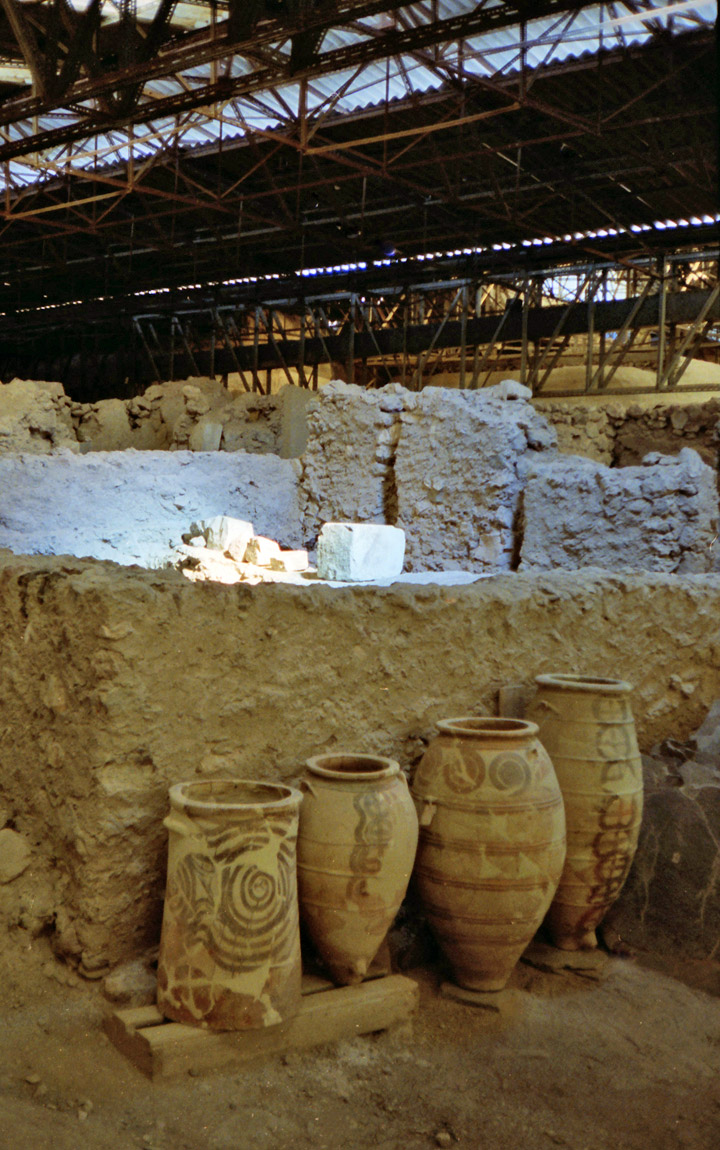 The oldest signs of human settlement are Late Neolithic (4th millennium BC or earlier), but ca. 2000–1650 BC Akrotiri developed into one of the Aegean's major Bronze Age ports, with recovered objects that had come, not just from Crete, but also from Anatolia, Cyprus, Syria, and Egypt as well as from the Dodecanese and the Greek mainland. 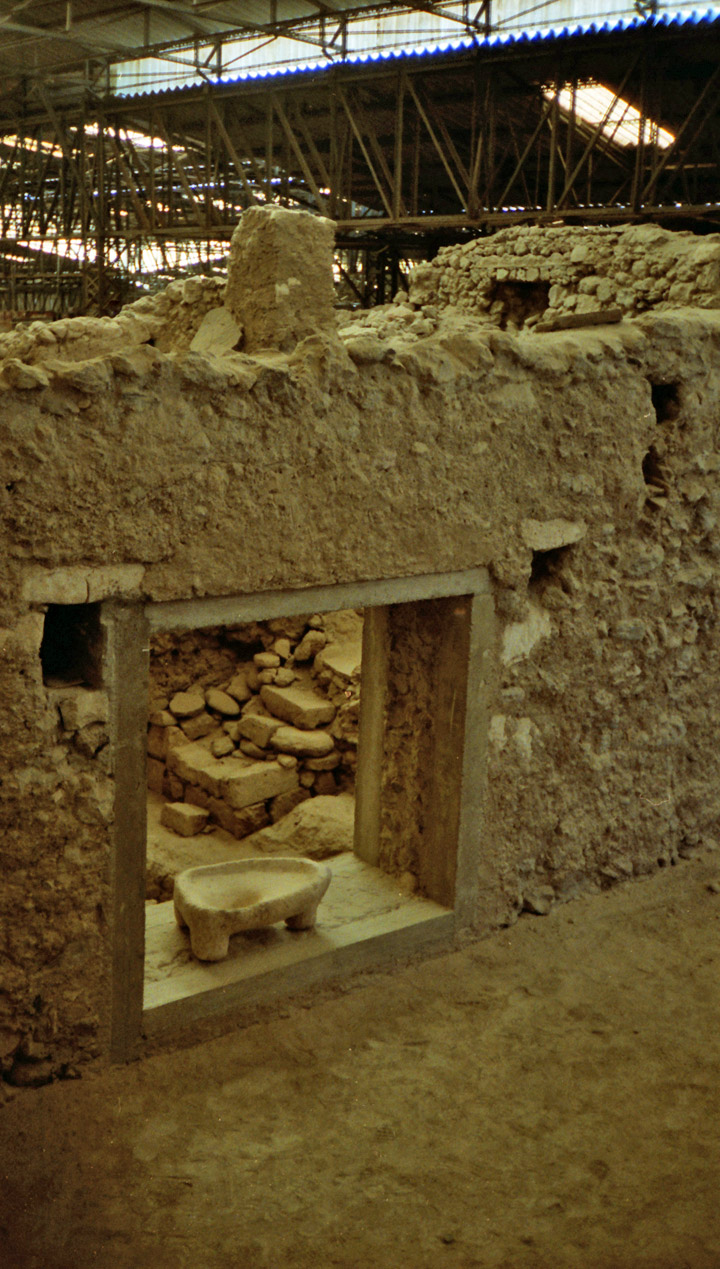 many artifacts were found

The Minoan eruption provides a fixed point for the chronology of the second millennium BC in the Aegean, because evidence of the eruption occurs throughout the region and the site itself contains material culture from outside. The eruption occurred during the "Late Minoan IA" period at Crete and the "Late Cycladic I" period in the surrounding islands. 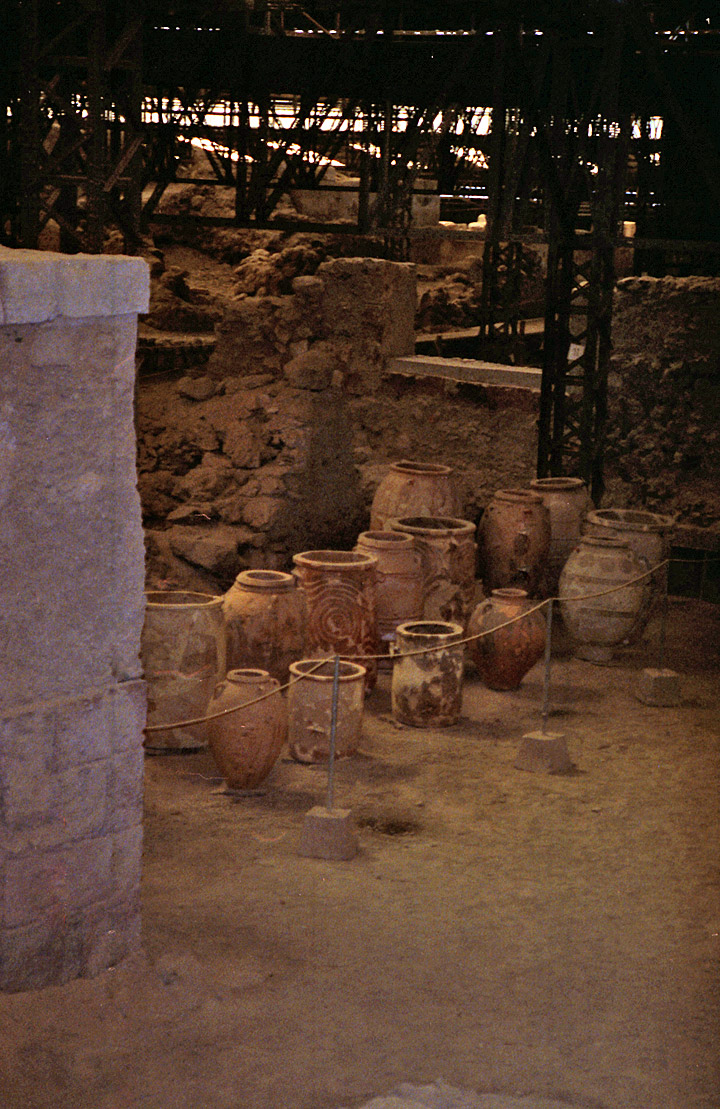 The exact date of the eruption, however, is unknown. Radiocarbon dating indicates that the eruption occurred about 1645—1600 BC. These dates, however, conflict with the usual date range from archaeological evidence, which is between about 1550 and 1500 BC 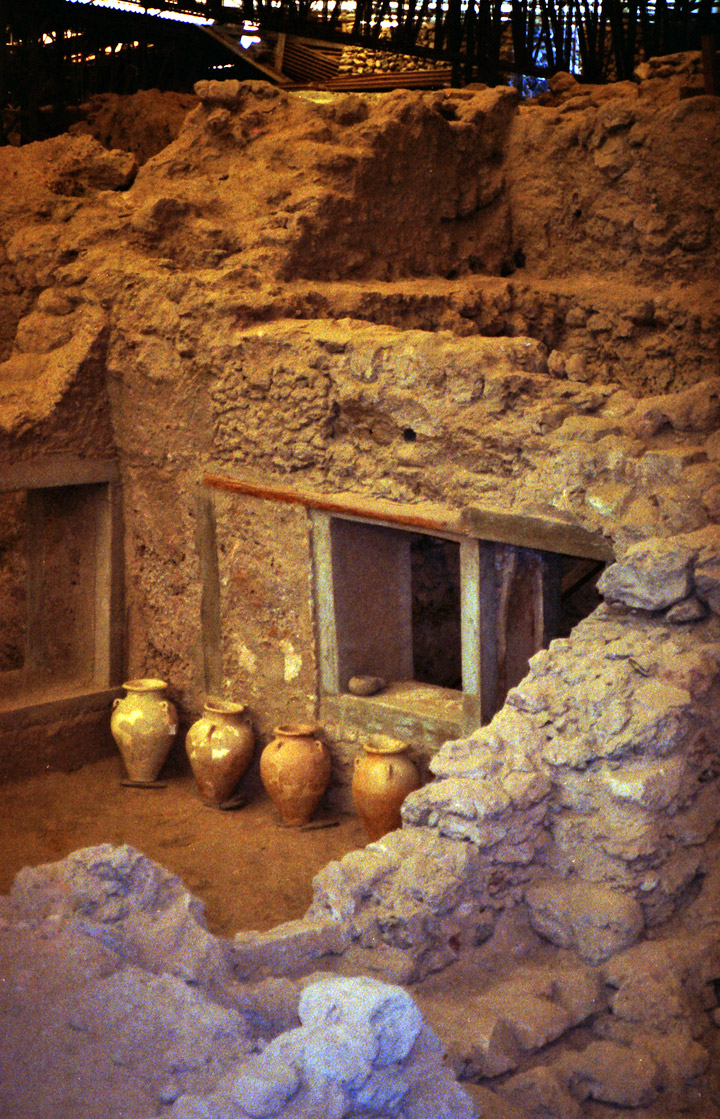 Santorini remained unoccupied throughout the rest of the Bronze Age, during which time the Greeks took over Crete. At Knossos, in a LMIIIA context (14th century BC), seven Linear B texts while calling upon "all the gods" make sure to grant primacy to an elsewhere-unattested entity called qe-ra-si-ja and, once, qe-ra-si-jo. If the endings -ia[s] and -ios represent an ethnikonic suffix, then this means "The One From Qeras[os]". If aspirated, *Qhera- would have become "Thera-" in later Greek. "Therasia" and its ethnikon "Therasios" are both attested in later Greek; and, since -sos was itself a genitive suffix in the Aegean Sprachbund, *Qeras[os] could also shrink to *Qera. (An alternate view takes qe-ra-si-ja and qe-ra-si-jo as proof of androgyny, and applies this name by similar arguments to the legendary seer, Tiresias, but these views are not mutually exclusive of one another.) 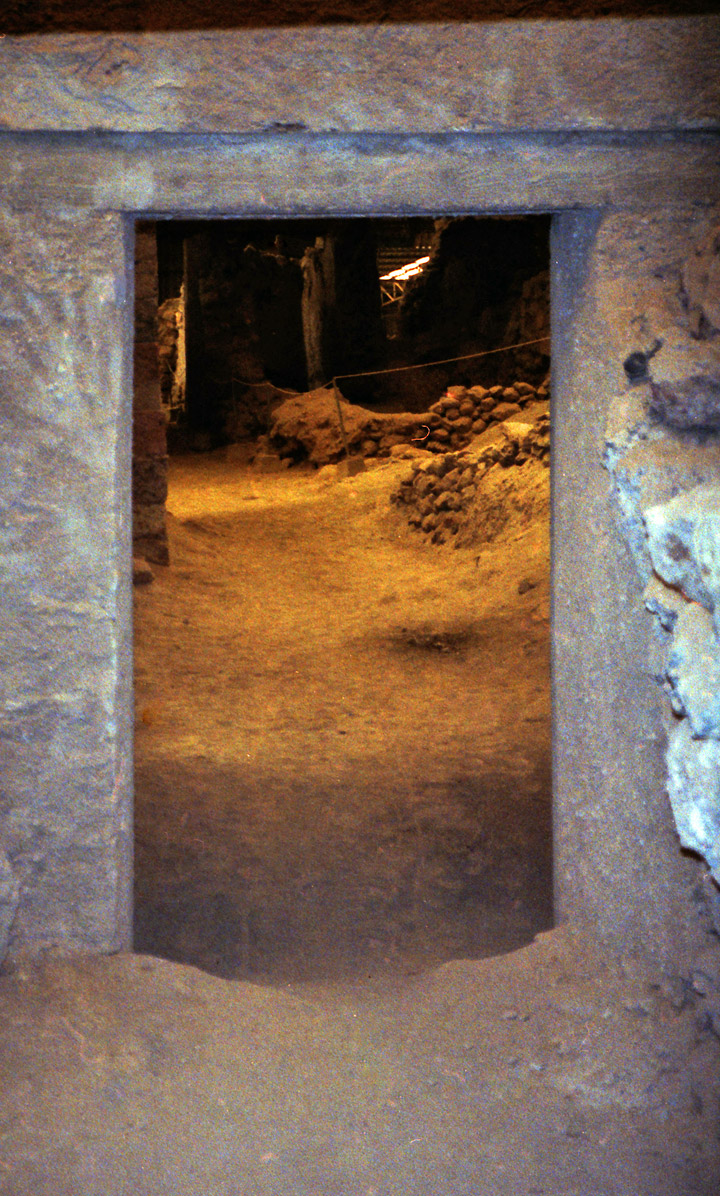