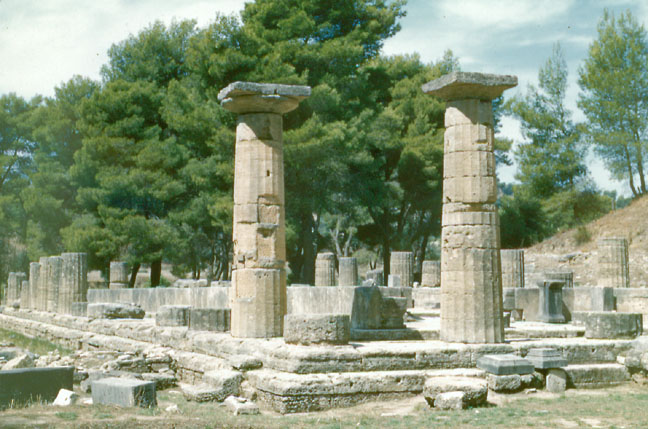 , site of the ancient Olympic Games, which were celebrated every four years by the Greeks. Olympia was situated in a valley in Elis, in western Pelopónnisos (Peloponnesus), through which runs the Alpheus River. It was not a town, but only a sanctuary with buildings associated with games and the worship of the gods. Olympia was a national shrine of the Greeks and contained many treasures of Greek art, such as temples, monuments, altars, theaters, statues, and votive offerings of brass and marble. The Altis, or sacred precinct, enclosed a level space about 200 m (about 660 ft) long by nearly 177 m (nearly 580 ft) broad. In this were the chief centers of religious worship, the votive buildings, and buildings associated with the administration of the games. 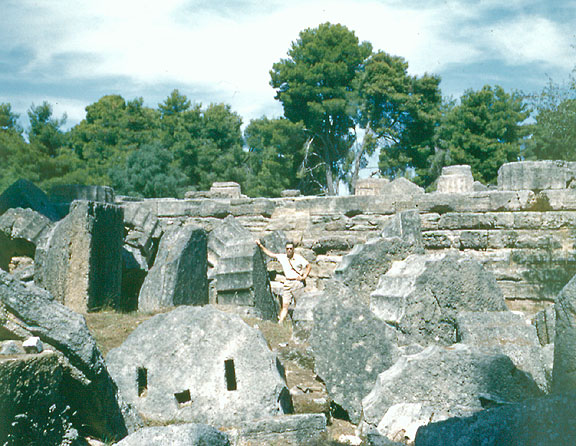 The most celebrated temple was the Temple of Zeus, dedicated to the father of the gods. In this temple was a statue of Zeus made of ivory and gold, the masterpiece of the Athenian sculptor Phidias Seven Wonders of the World. Next to the Temple of Zeus ranked the Heraeum, dedicated to Hera, the wife of Zeus. In this temple, probably the oldest Doric building known, stood the table on which were placed the garlands prepared for the victors in the games. The votive buildings included a row of 12 treasure houses and the Philippeum, a circular Ionic building dedicated by Philip II, king of Macedonia, to himself. 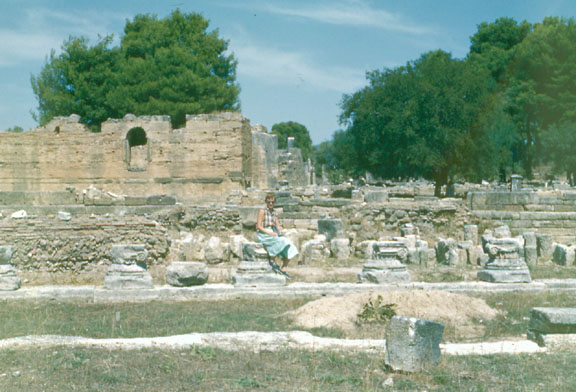 Outside the Altis, to the east, were the Stadium and the Hippodrome, where the contests took place; on the west were the Palaestra, or wrestling school, and the Gymnasium, where all competitors were obliged to train for at least one month. The French began excavations here in 1829. German explorations of 1875-81 threw much light upon the plans of the buildings; they were resumed in 1936, 1952, and 1960-61. Many valuable objects were discovered, the most important of which was a statue of Hermes, the messenger of the gods, by Praxiteles. 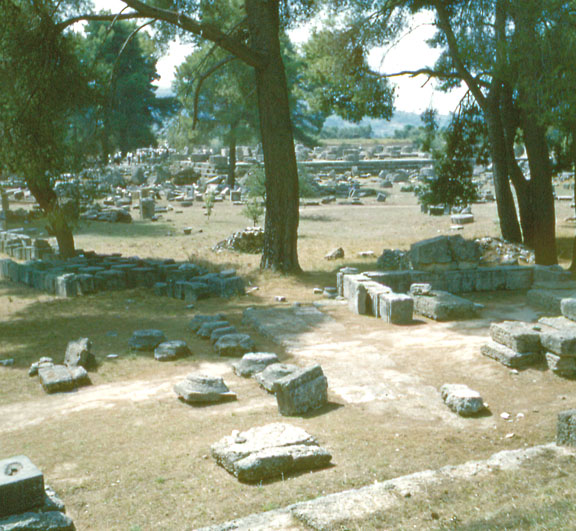 Temple of Zeus in the background 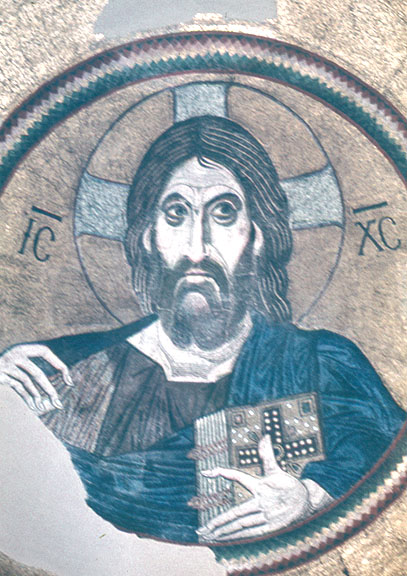 This monastery in Phocida near Delphi belongs to a typological series and shares aesthetic characteristics, with churches  built on a cross-in-square plan with a large dome supported by squinches defining an octagonal space. In the 11th and 12th centuries they were decorated with superb marble works as well as mosaics on a gold background, all characteristic of the 'second golden age of Byzantine art'. 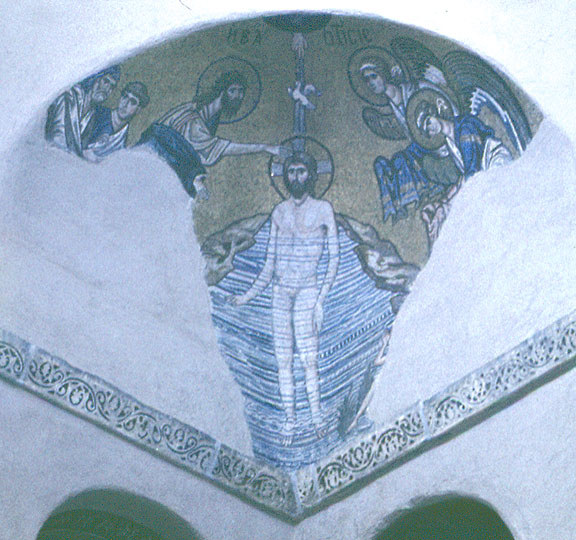 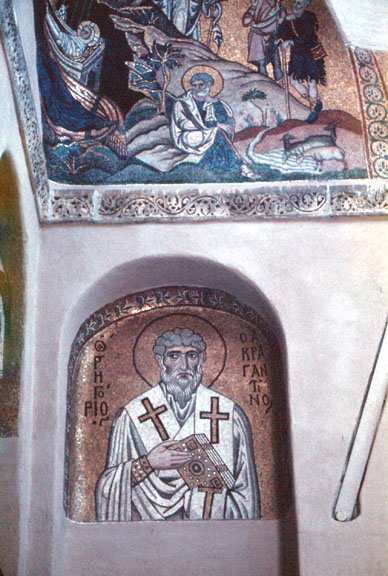 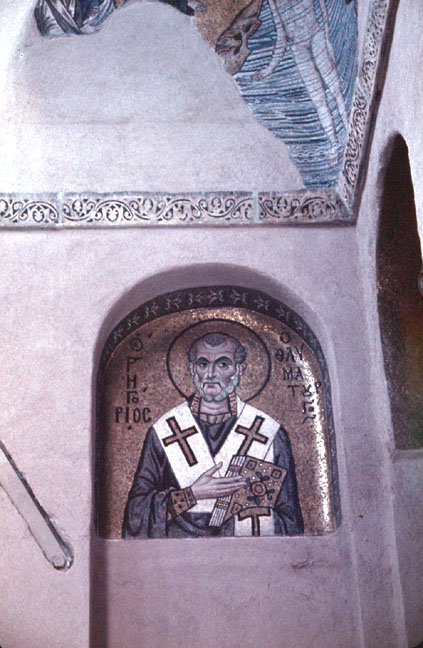 examples of the second golden age of Byzantine art 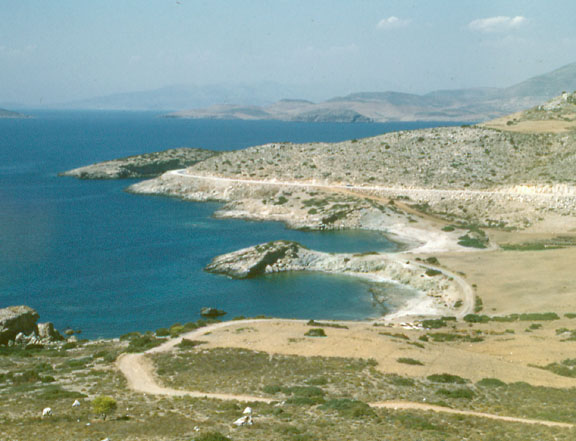 along the shore of Mediterranean South of Athens 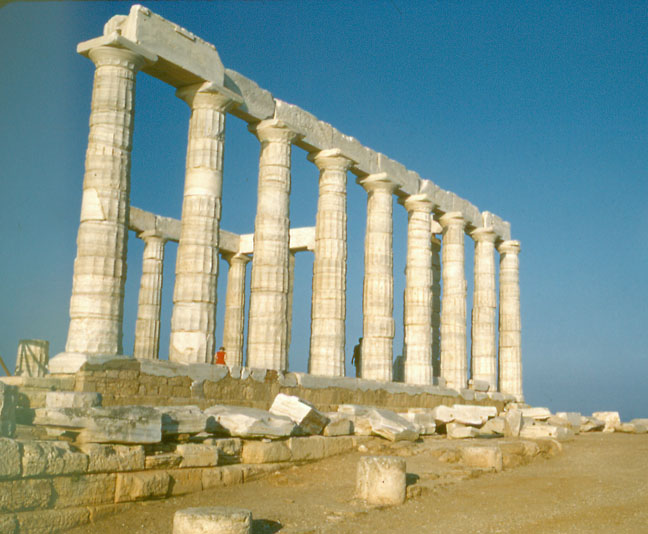 is this lovely temple 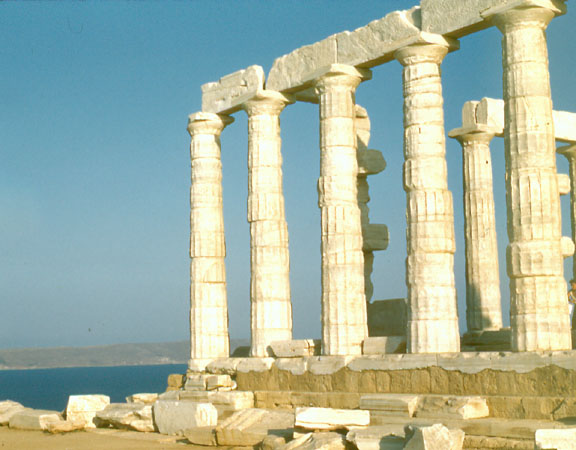 which shines in the late day sun